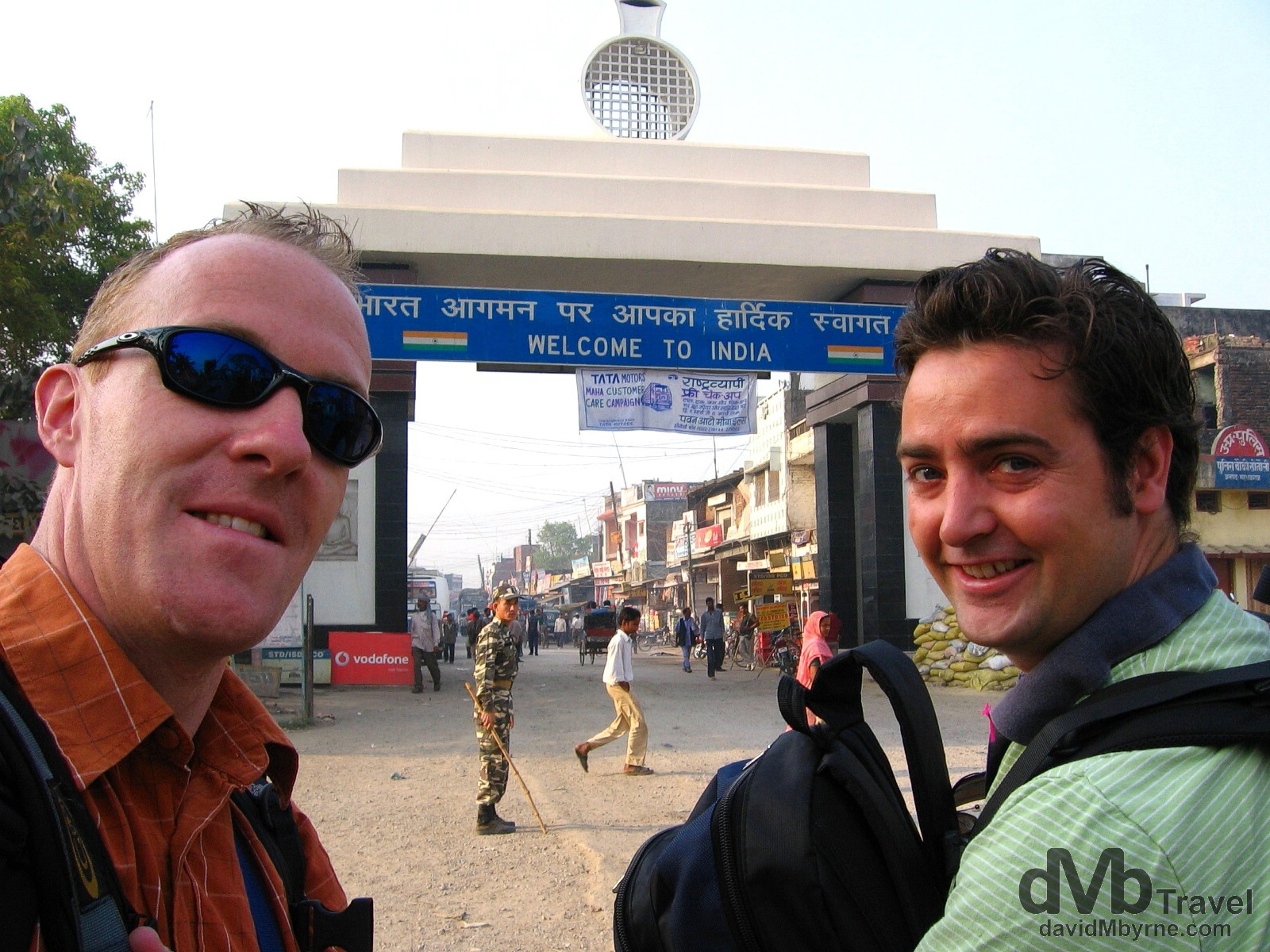 We finally made it to Varanasi in the Indian state of Uttar Pradesh. Getting here from Sunauli, the border town with Nepal some 260 kilometres north of here, wasn’t hard. It just took time. Lots of time. We’ve spent the last two days on buses and to make that adventure sound exciting is a task well beyond my abilities so I’ll just get on with describing the journey back to India and what it feels like to be somewhere I said I’d never return to when I last left it a 5-and-a-half years ago.

A stint in India will beat the restlessness out of any living creature.

Crossing into India at Sunauli on the Nepal India border (

). The walk across the Indian boarder this morning was fairly customary. The boarder officials looked anything but official, sitting as they were in lawn chairs on the side of the road reading the newspaper. They are only used to dealing with the few westerners who bother to cross the boarder here because Indians and Nepalese can cross without so much as needing to show ID. March 16, 2008.

With formalities out of the way I was soon getting reacquainted with Indians, their somewhat overbearing advances and their fondness of being economical with the truth.

“This is the best rate Sir,” we were told when looking to exchange money, and

“This is the only bus to Varanasi Sir,” we were told when looking into transport options for getting to Varanasi.

Take it all with a pinch of skepticism and you might just stay one step ahead of the westerners vs. Indians rat race. We eventually ended up haggling for a good price for two seats on the “only” bus to Varanasi – you haggle for everything in India, except your sanity. 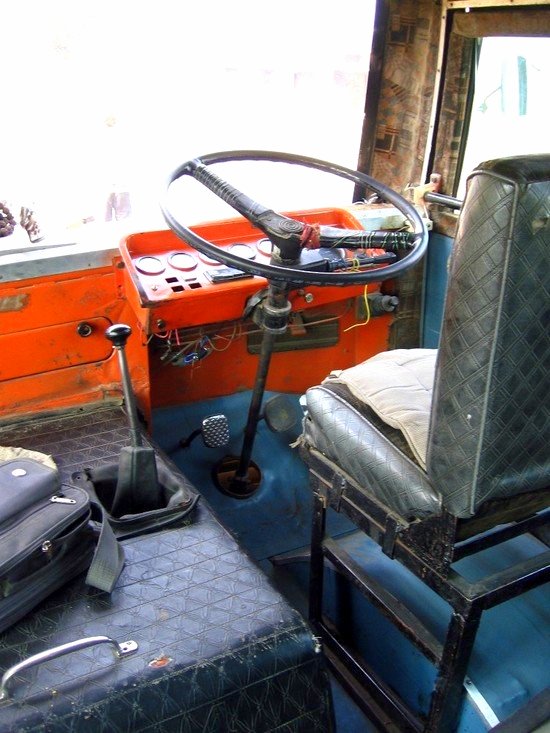 Upon boarding the bus to Varanasi we asked the driver how long the bus trip was going to take.

If only. It was 11-and-a-half hours, and 3 on-route stops later when we finally got off the damn thing, it having taken that long to trundle the 260 kilometres from the Nepal/Indian border to some side street in Varanasi, as manic and overbearing as any Indian city. Here I continued to get reacquainted with certain sections of Indian society, this time with Indian auto-rickshaw drivers, as anarchic a bunch as you could possibly hope meet. Soon after we were speeding to the Old City area of Varanasi in a nippy and noisy auto-rickshaw, a motor-scooter with a couple of seats in the back. Refreshingly we didn’t even have to haggle for the fare but we did have to look at the auto-rickshaw driver’s suggestion for accommodation, having gotten there by him driving us through the tight alleyways of the Old City. Not liking his choice we set out on foot to find somewhere else, but needless to say it wasn’t long before we were accosted by another tout (they are attracted to westerners with bags on their backs like a bull to a red rag) who we allowed to lead us through more tight lane ways to another guest house, the Puja Guest house. We liked this one, really liked it (it was even in our guidebook as a recommended place to stay). Touts; India is full of them and while generally they are a pain in the ass (they work for a commission) and they do have a bad reputation, I seem to play them to my advantage and most of the time they are useful (you can always walk away, just like we did with the auto-rickshaw driver, if you don’t like the option they present to you and there are always alternatives nearby). Soon after we were eating dinner in the dry-as-a-bone restaurant on the rooftop of the guest house and wondering where the hell we were going to find beer for tomorrow’s 2-man Paddies Day celebration. Mission impossible? Who knows?

· Surely Not
We never though Indian roads would be as bad as Nepali roads. While the road we travelled on today lacked the winding, steepness of the Nepalese roads we’d become accustomed to, it still didn’t mean travelling on Indian roads was any quicker. Far from it. My longest stint in an Indian bus before today was about half an hour (from downtown Calcutta to the airport in December 2002) and I didn’t know what to expect from a long distance bus ride in the country. Train is the definitive form of transport in India and one of its great experiences and we’re now thankful that all of our India travelling from here on out will be by train.

“Here Lad. Surely Indian roads aren’t as bad as Nepali roads. I mean, India is a nuclear power after all and they launch satellites so it follows that, 1) they might be able to afford a bit of tarmac and, 2) that they know how to lay roads.”

I said that to Pat before we boarded the bus to Varanasi at the India/Nepal boarder.

Pat reminded me having gotten off the bus 11 and a half hours later that,

“assumptions make an ass of me and you.”

“Thanks for that Lad.”

· Hornaholics
Indians use the horn way more than the Nepalese and they seem even crazier drivers. Now that’s saying something. It goes without saying that a horn on an Indian road is a necessity. To drive without one is suicide, plain and simple. Btw, an average of 233 people die on Indian roads every day. That’s 85,000 road-related deaths a year. I wish my guidebook didn’t print that sort of statistic. Reading it sitting on a bus, horn blaring and hurtling down the wrong side of the road, dodging cows and with a few tons of horn-blaring TATA metal coming towards you in the opposite direction, does nothing for your nerves, except shred them.

· Culinary Russian Roulette
We stopped off a few times on our 11-and-a-half hour bus odyssey and got a tad adventurous. The cooking conditions of the establishments we frequented left a lot to be desired, but we put that to the back of our minds; we had to eat.

“Food poisoning here we come,” we proclaimed as we dived into our helping of roadside samosas (small turnover filled with vegetables or meat and fried and served hot) and onion bhajis (onions deep fried in batter).

Pat said he expects to get sick at least once in India, a good estimate in my eyes. 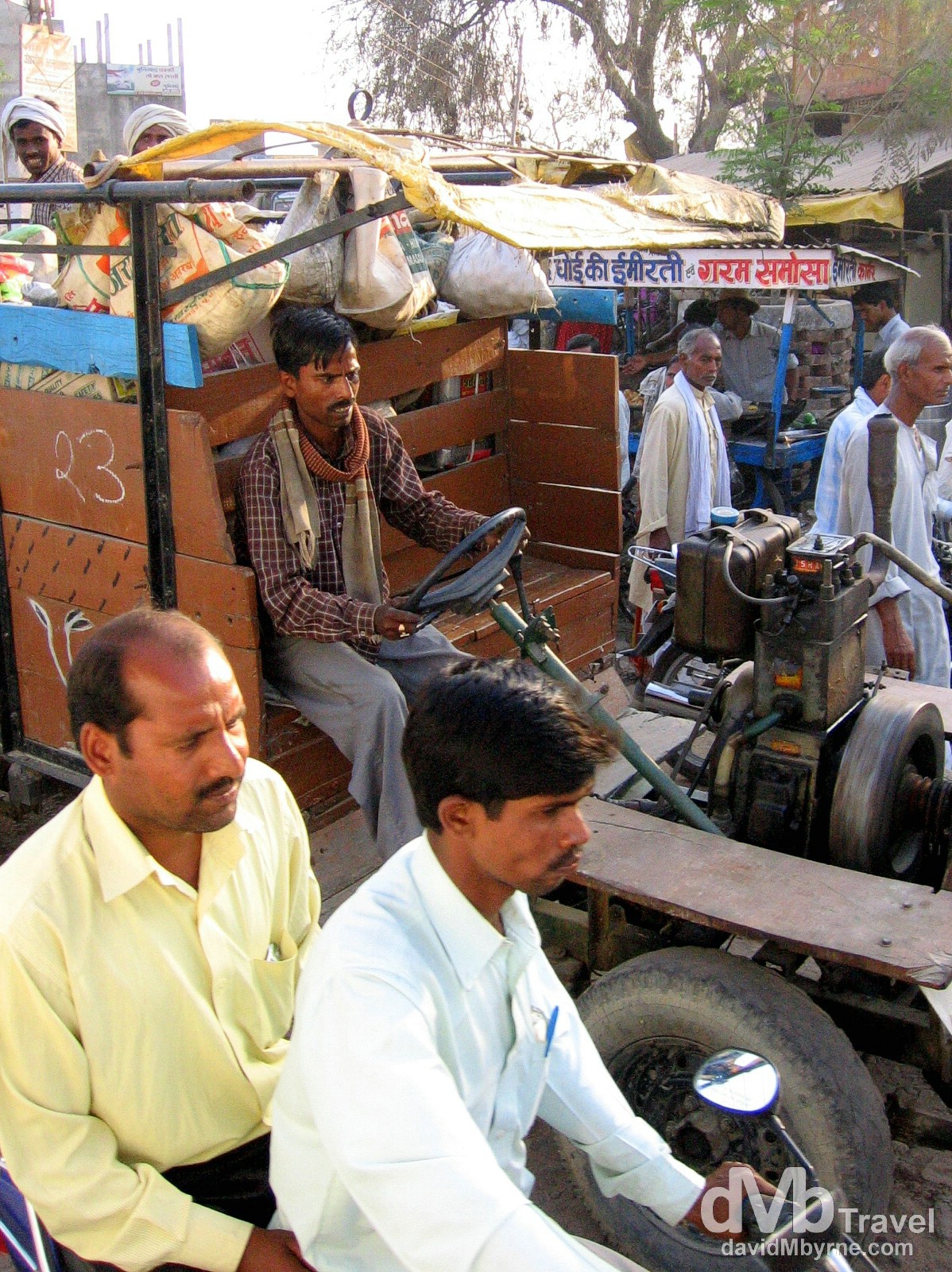 Life really is hard here in rural India. Sitting on the bus to Varanasi, listening to mp3s on my multimedia player, sticking my digital camera out the window and viewing the scene through my €100 sunglasses really hit home how lucky, once again, one is to be born into a developed, western society. Seeing grown men by the side of the road in searing heat braking rocks with sledgehammers and women washing themselves and their half-naked, malnourished children with hoses makes you stop and think – and be damn grateful it isn’t you. Tight roads en route to Varanasi, India. March 16, 2008.

· More to come
Pat proclaimed that within 20 minutes of getting to India he felt dirty.

· 2 Minutes
“Where is this guest house?” we asked the tout leading us through the maze of tight cow-infested alleyways that make up the Old Town of Varanasi.

“2 minutes! But you said that 20 minutes ago,” we said, sweat rolling down our brows.

Move to the guest house cafe/restaurant about an hour later. We were waiting for our food to arrive, food we had ordered 40 minutes earlier. Pat lost his patience and approached the staff (it had been a long day).

“We’ve been waiting 40 minutes for our dishes. What’s up?” he inquired.

“Are you the manager?” was his next question to another member of staff.

“No Sir, but is there anything I can help you with?” he was asked.

“Yes there is. You can get me the manager please.”

The manager arrives on the scene.

“Do you think it’s reasonable for someone to have to wait 50 minutes for a dish?” Pat asked him.

“Do you think it’s reasonable for someone to have to wait 50 minutes for a dish?” Pat repeated one more time.

“We had a lot of orders placed at the same time this evening Sir,” the manager explained.

“So are you telling me that it is normal in this cafe for people to wait 50 minutes for a dish?”Pat retorted.

“Good. I don’t expect to have to pay for this dish,” Pat told him as he took the dish in question from the waiter passing him by en route to our table.

“Jesus Lad, don’t go burning our bridges,” I told him as he tucked into his dinner.

“They could spit in our breakfast in the morning!”

· Dry Paddies?
We now realise most of the restaurants here in Varanasi do not tolerate alcohol. That came as quite a shock to us. It is something to do with religion so we’re fast turning against this whole Hindu business already.

“But, but, but it’s Paddies Day tomorrow!” we reminded each other when the realisation hit.

We’re hoping to figure something out, but we’re not too hopeful. This could be bad. Very bad.

· Good to be back

For all its jarring juxtapositions, India remains an utterly compelling destination.

Whatever hassles, trials, tribulations or difficulties India may have thrown up in the last few hours, not to mention the last time I was here, it’s still good to be back. Getting back to India is kind of symbolic for me; it was the first country I visited on my November 2002 to August 2003 round the world trip, the trip that stared me on this travelling buzz. I remember the shock of India back then all too well and after 4 weeks in the country, 2 of them spent hiding away from its chronic madness on Goa’s beaches, I couldn’t wait to get out. I estimate about two months passed after leaving the country before I stared thinking back on my first India experience fondly, probably about the same time I started feeling clean again. Up to that it was remembered with anything but fondness. I landed in India back then with the greenest horns imaginable and, pre-trip planning aside and weighed down with travel guides, I didn’t know what to expect. But I was prepared, I thought, for anything; I had gotten my vaccinations; I was on my prescribed course of anti-malaria pills; I had my 100% DEET insect repellent that I applied liberally every evening even though it ate through most of my clothes; I had my personal mosquito net, my travellers first aid kit and the usual anti-nausea and ‘blocking’ pills; I had my comprehensive travel insurance policy safely tucked away inside my money belt, beside my traveller’s cheques, the receipts for which were well hidden inside my well padlocked rucksack. Hell, I even had one of them tinfoil space blankets, a snap flare, and an emergency ice pack, one of those bags that contain some sort of endothermic compound that, if hit in a certain place, magically turns into and emergency ice pack. Oh the absurdity and ignorance of it all. Things are a little different this time around. When we could be bothered we are sharing Pat’s tiny bottle of sweet-smelling DEET insect repellent, and we’re taking a one-a-day malaria pill, pills we bought over the counter in Kathmandu last week and the only anti-malaria pill sold in this part of the world. It, the pill, tastes like a Smartie and probably has the same effect when it comes to preventing the disease (it’s only 40% effective if taken in conjunction with another pill, one not available in Nepal or here in India). How blasé one can become after a few years travel. Blasé or foolhardy. Only time will tell.