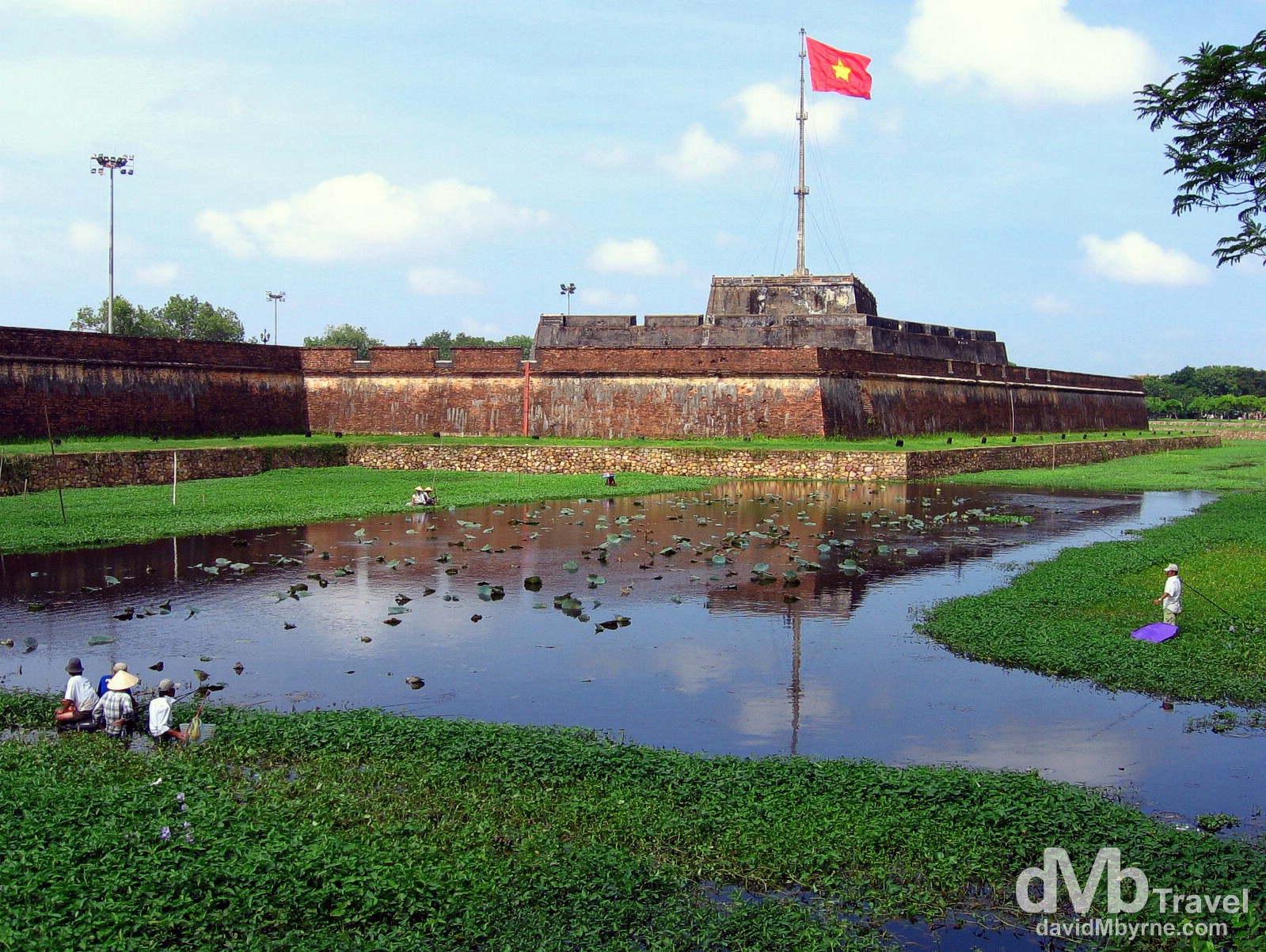 The city of Hué is nestled in the central lowlands of Vietnam, about 700 kilometres (430 miles) south of Hanoi, 1100 kilometres (680 miles) north of Ho Chi Minh City (Siagon) & about 10 kilometres from the South China Sea to the east. Traditionally Hué has been one of Vietnam’s main cultural, religious and education centres. The city was the official residence of the Nguyen Dynasty beginning in 1687 and it became the capital of the Annamite Empire in 1802. In the old section of Hué are several splendid tombs of the Nguyen emperors and those, along with a series of royal buildings built during the 19th century inside an impressive 10 kilometre perimeter moated Citadel, are the city’s main attractions.

Locals in the mote outside a section of the 10 kilometre walls of the Imperial City, a.k.a. the Hué Citadel. Work began on the Hué Citadel in 1804 under Emperor Gia Long. It was originally constructed of compacted earth but today is mostly brick. It has 4 sides and 10 fortified gates, each reached via a bridge across the mote. Hué, Central Vietnam. September 7th, 2005. 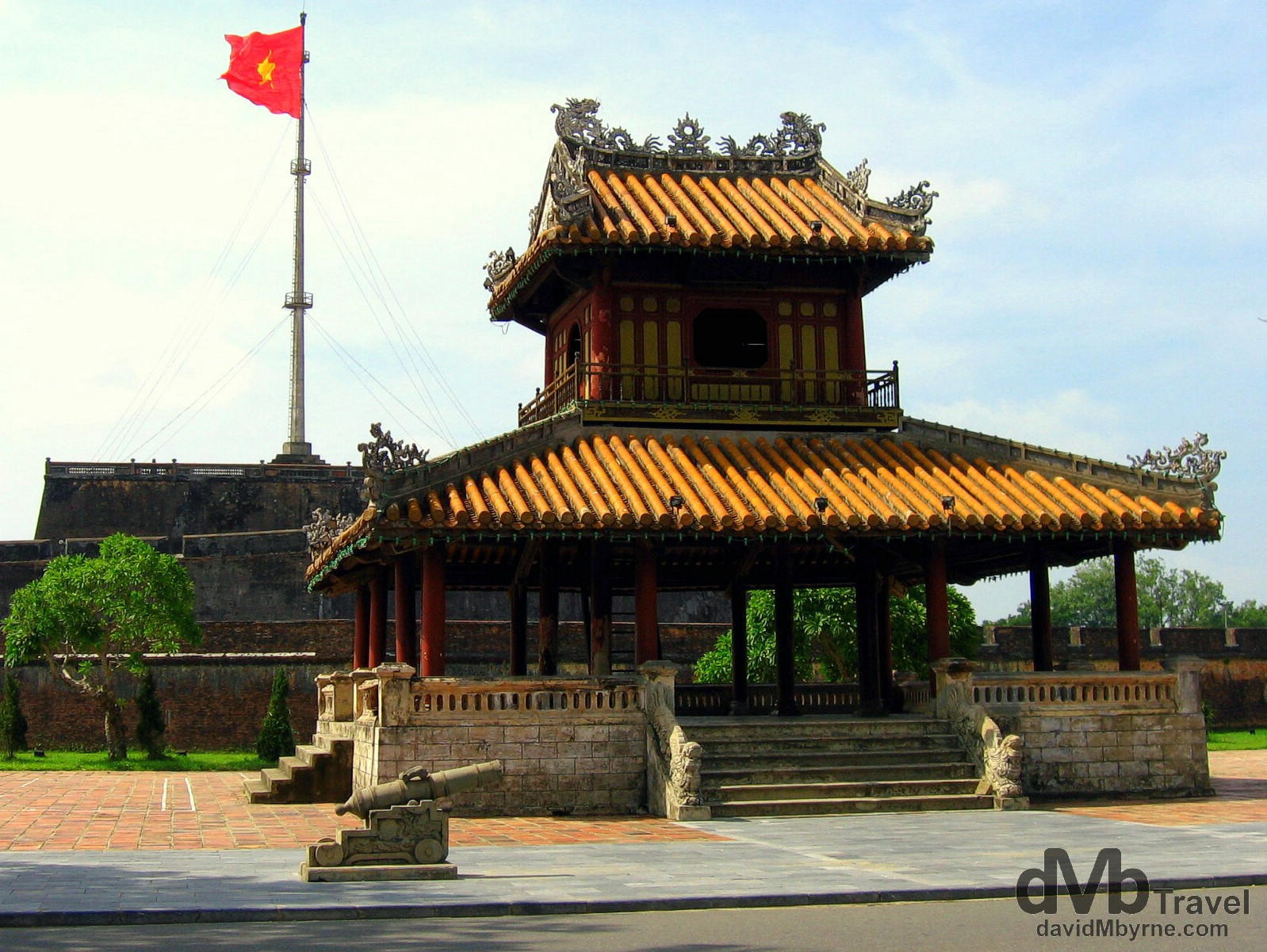 A structure fronting the Citadel in Hué. The Citadel’s 37-metre high flag tower is a symbol of the city of Hué and Vietnam’s highest flag tower. Like most structures in Hué, the tower itself has a history worth noting – it was originally erected in 1809, extended in 1831, knocked down by a typhoon (which destroyed most of the city) in 1904, rebuilt again in 1915, destroyed again in 1947 by war and finally erected to its present form in 1949. No sign of it going anywhere these days. At least not any day soon. Hué, central Vietnam. September 7th, 2005.

Tourism || The Hué Saviour
It’s a safe bet to say that tourism has saved the present-day city of Hué; between 1975 and 1990 the old city buildings were regarded as politically incorrect in Communist Vietnam, signs of the former feudal Hguyen dynasty. Everything was left to decay and it was only in 1990 that the local government woke up and recognised the potential of their city’s sights in attracting the tourist dollar, going so far as to designate the city’s monuments as National Treasures. But even better was to come for Hué with the move by UNESCO in 1993 to collectively designate the monuments a World Heritage Site, titling them the Complex of Hué Monuments. Today restoration from years of abuse and neglect goes on unabated with tourist numbers increasing year on year.

Hué represents an outstanding demonstration of the power of the vanished Vietnamese feudal empire at its apogee in the early 19th century. The complex of monuments is an outstanding example of an eastern feudal capital and of the planning and construction of a complete defended capital city in a relatively short period. The integrity of town layout and building design make it an exceptional specimen of late feudal urban planning.

– UNESCO commenting on the Complex of Hué Monuments 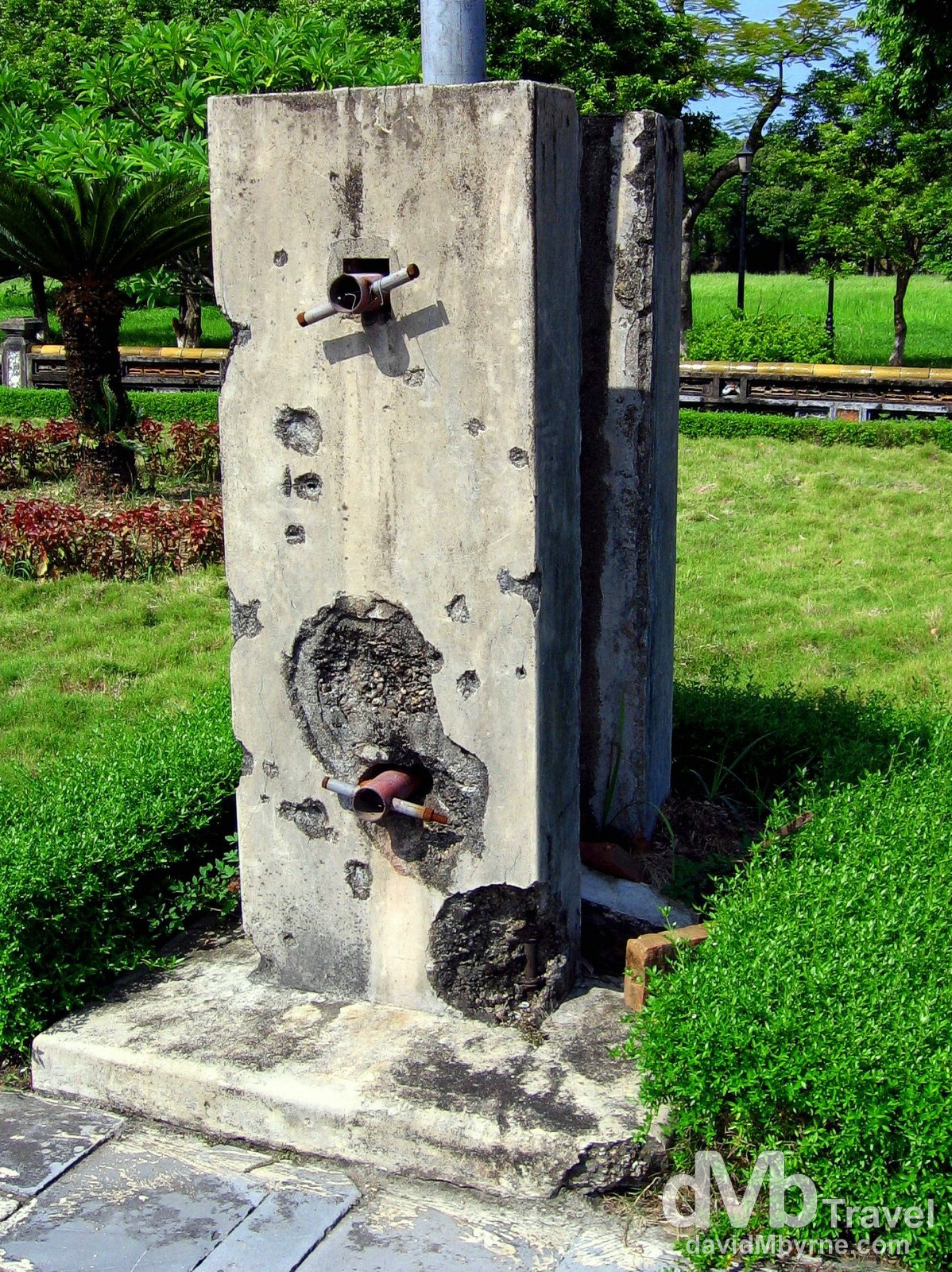 Damage from the warring past visible in the grounds of the Hué Citadel, various parts of which have suffered damage or complete destruction as a result of various wars over the years. Hué was the site of some of the bloodiest battles of the Vietnam War. During the 1968 Tet Offensive most of the area inside the Citadel was battered by the South Vietnamese Air Force, US artillery and brutal house-to-house fighting, the combined affects of which saw over 10,000 people killed, most of them civilians. Still today one can see evidence of past fighting all over the city, from damaged pillars like this one in the grounds of the Citadel to bullet holes on the bridges spanning the Perfume River. Hué, Central Vietnam. September 7th, 2005. 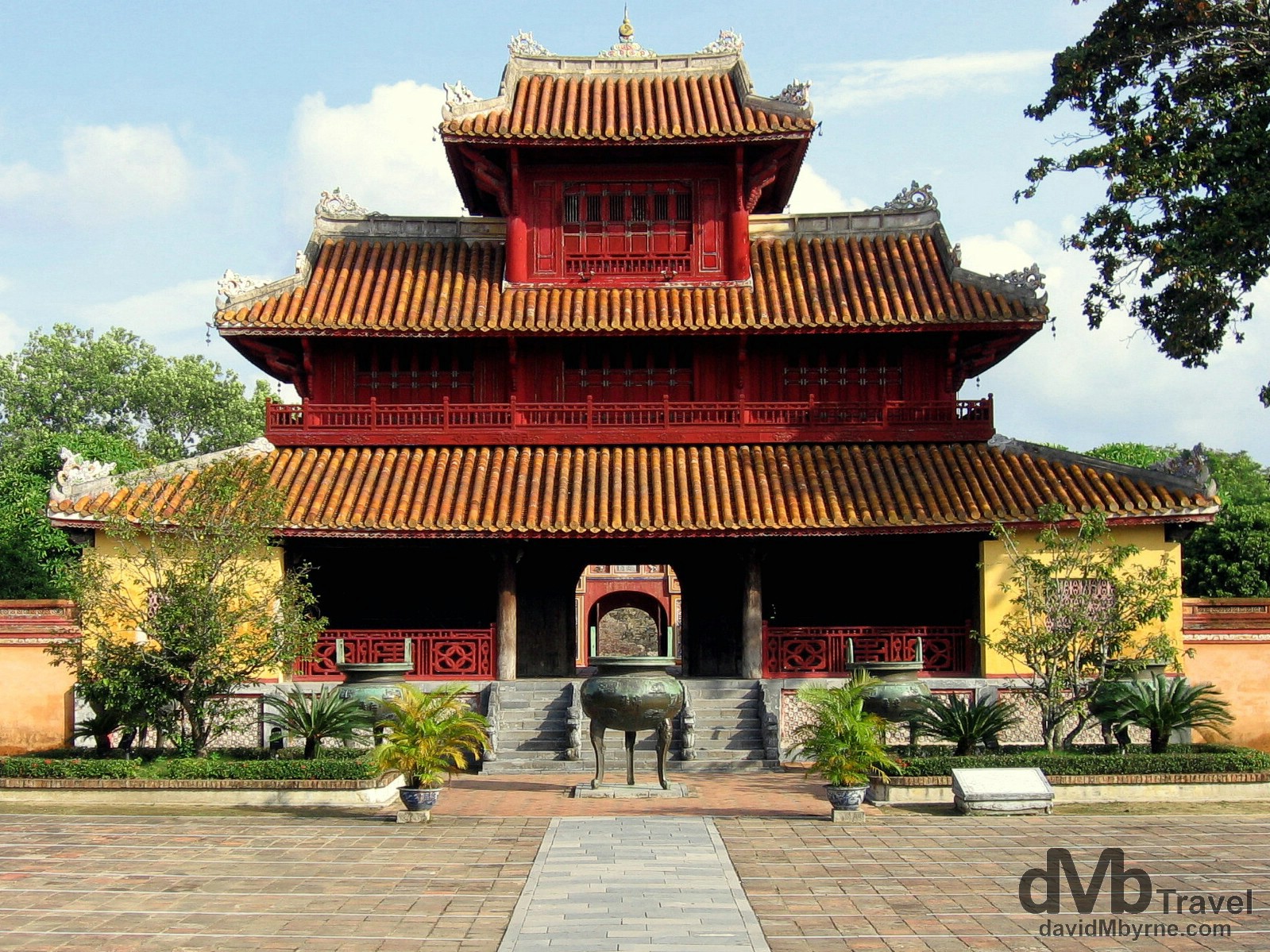 In the grounds of the ancient UNESCO-listed Citadel in Hué, Central Vietnam. September 7th, 2005. 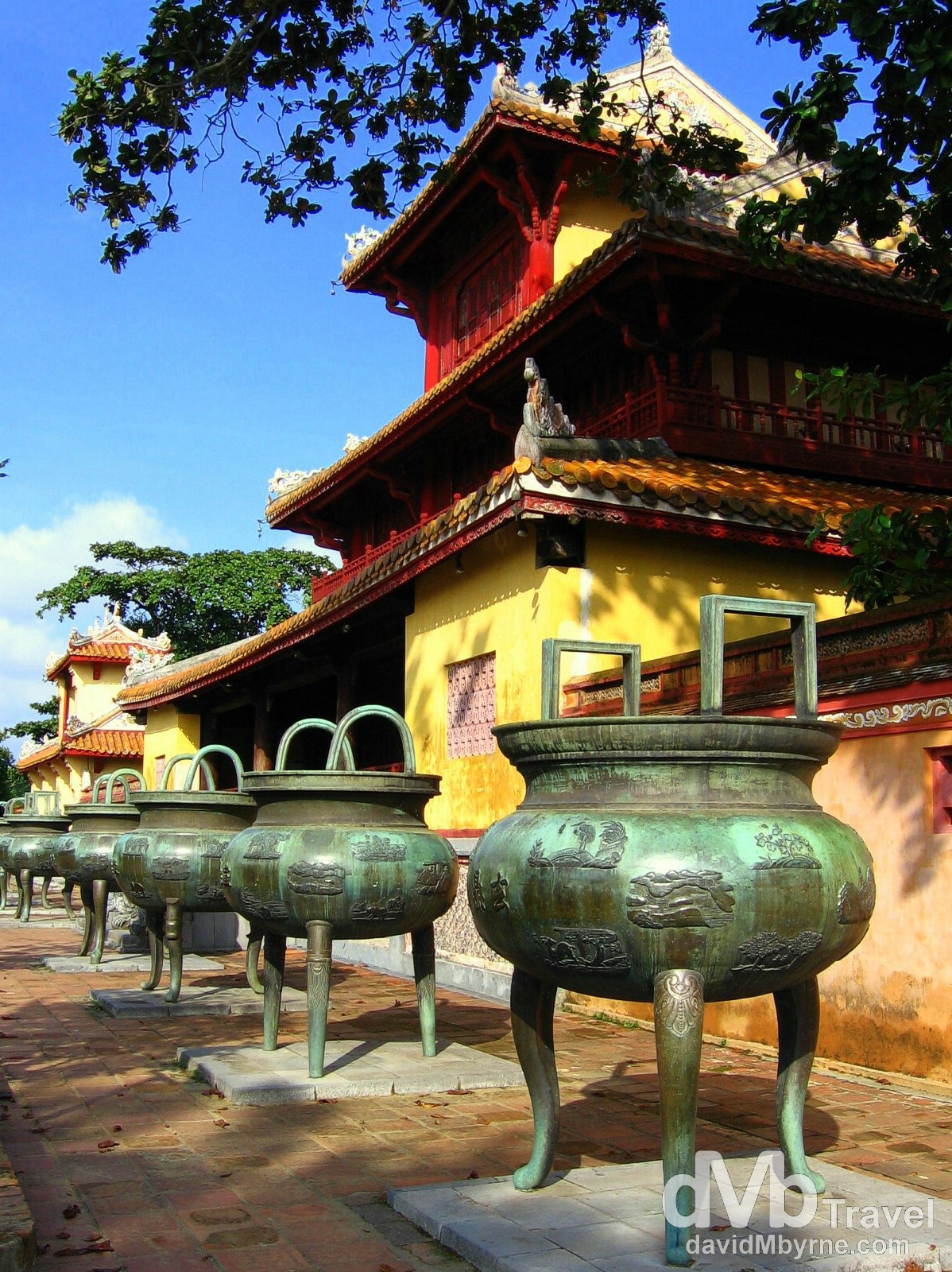 Some of the 9 Dynastic Urns of Hué Citadel. At about 2 metres in height and weighing between 1900 & 2600 kilograms each, the urns were symbols of power & stability during dynastic times. Thankfully they survived damage during the Vietnam War. In the grounds of the Citadel in Hué, Central Vietnam. September 7th, 2005. 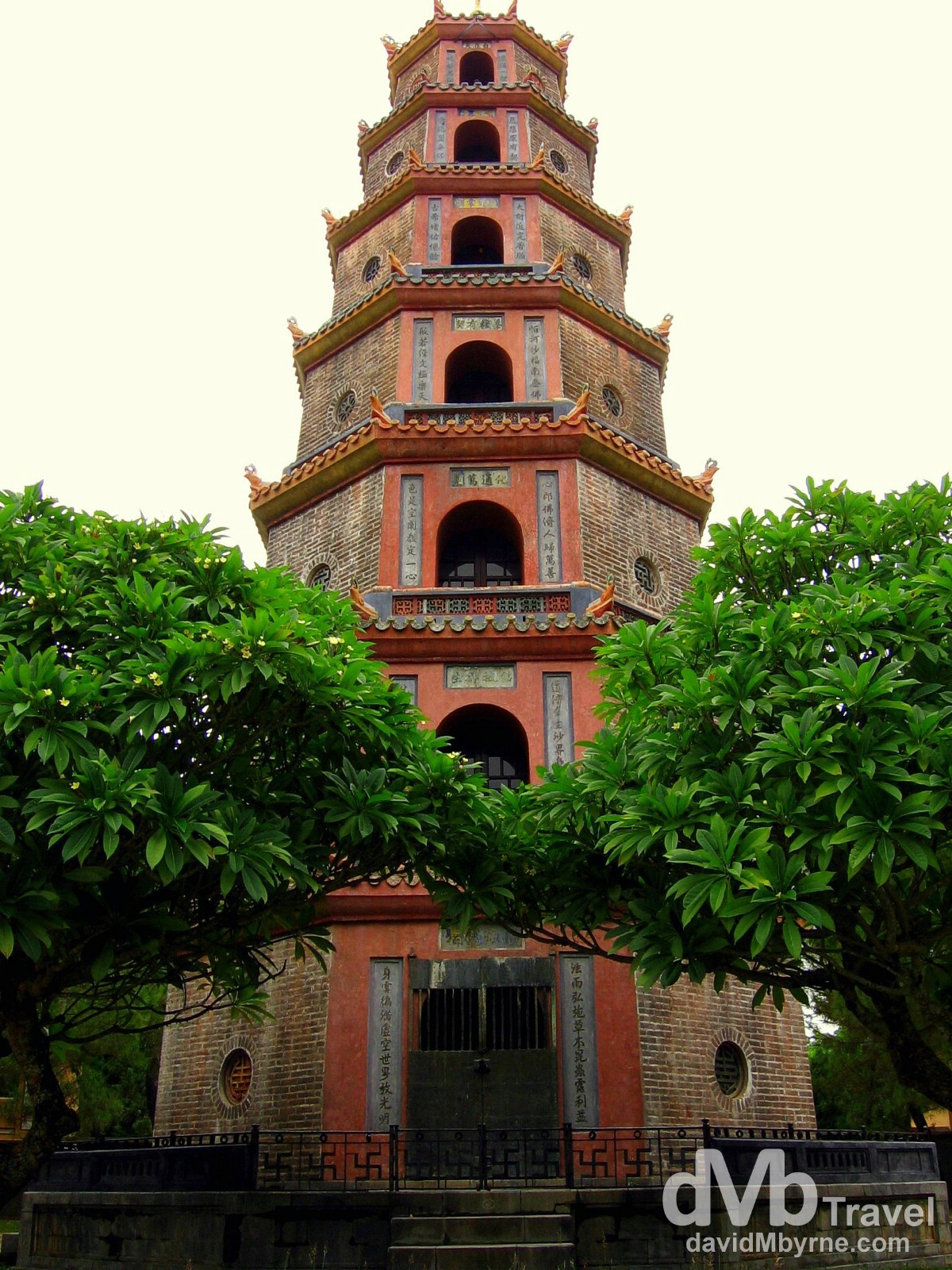 Built on a hillock overlooking the Perfume River about 4 kilometres from Hué, the Thien Mu Pagoda is not only an icon of city of Hue but also of Vietnam itself. The present 7 storey, 21-metre high octagonal tower was built in 1844 by Emperor Thieu Tri but there has been a pagoda here since 1601 when, as legend has it, a Fairy Women called Thien Mu appeared and told the people that the lord would come to build a pagoda for the country’s prosperity. On hearing this the Emperor at the time, Nguyen Hoang, had a pagoda built on the site. By the Perfume River outside Hué, Central Vietnam. September 8th, 2005Vietnam. September 8th 2005. 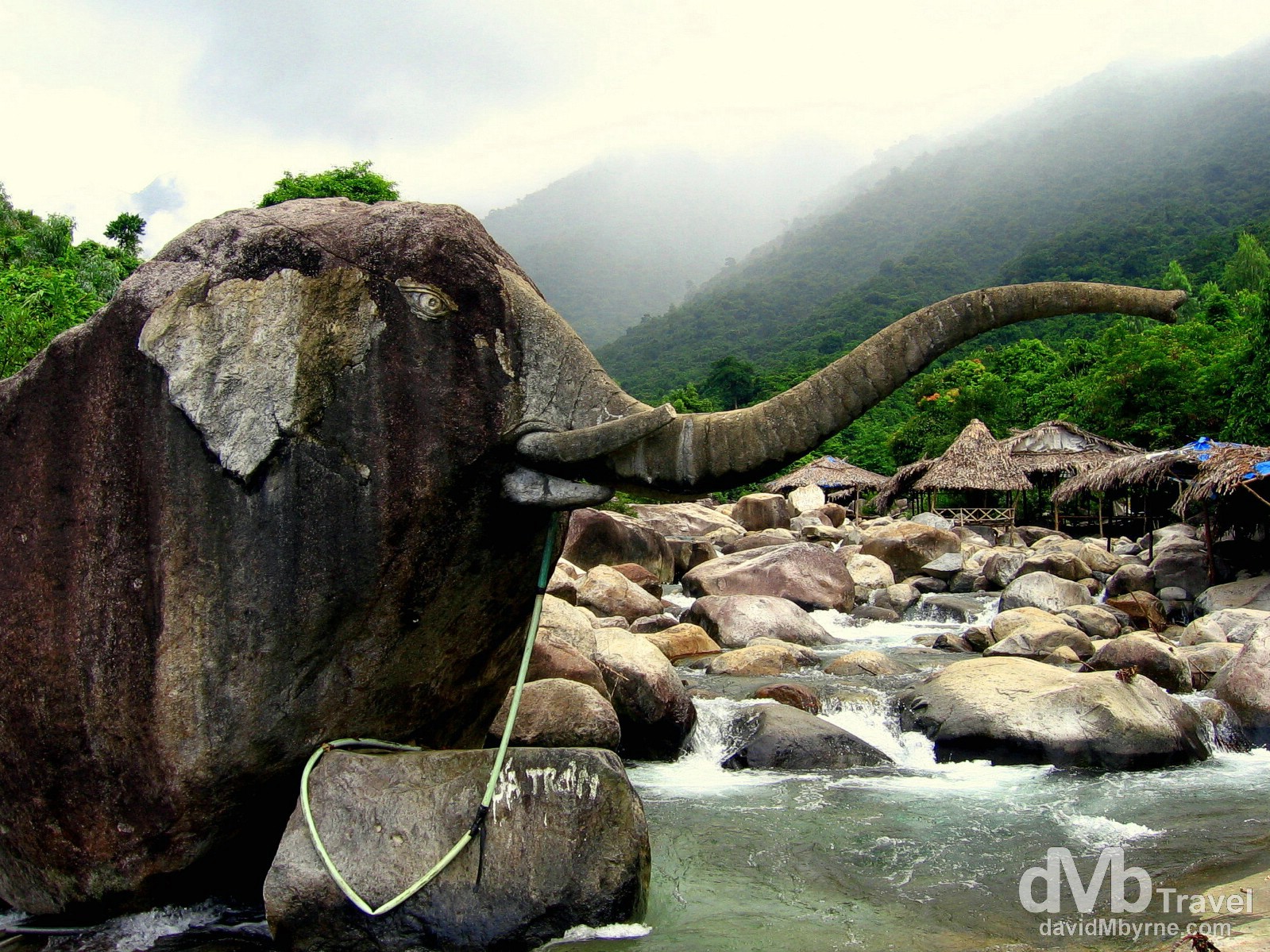 Suoi Voi (Elephant Springs) in Bach Ma National Park, some 50 kilometres from Hué, is a secluded recreation area where you can walk through the forest and swim in the cool, crystal-clear streams. The streams feature huge boulders, one of which, seen here, is in the shape of an elephants head, hence the name. Foreigners are rare out here (one of the main reasons I paid a visit) so I was a bit of a hit, not to mention a huge curiosity, to the local Vietnamese I was sharing the streams with. Suoi Voi, Bach Ma National Park, Central Vietnam. September 8th, 2005.