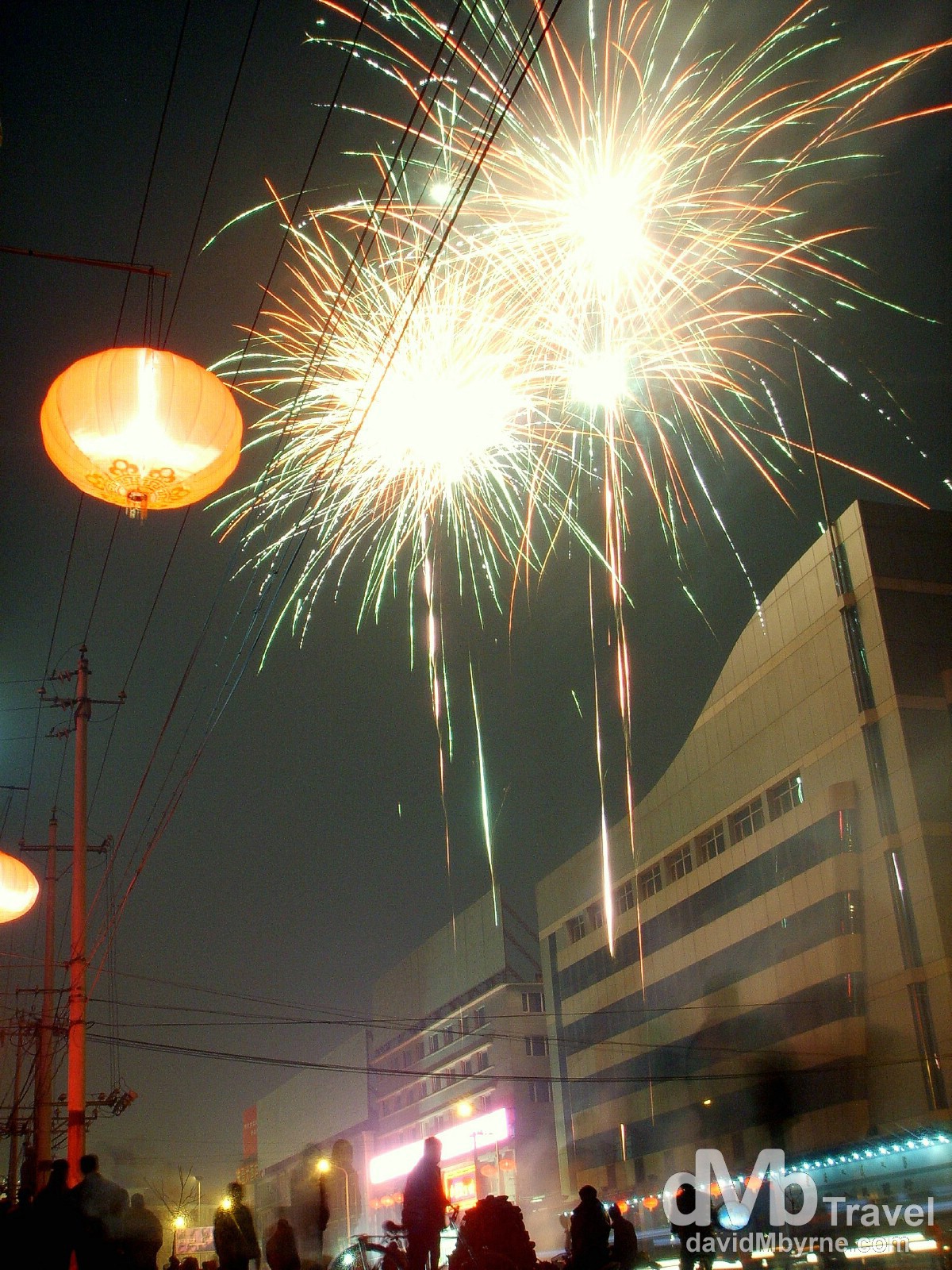 Hohhot is the capital of the Chinese province of Inner Mongolia and it was once, along with vast stretches of Siberia to the north, part of Mongolia proper, my next stop. I remember reading that it’s a good place to come if you want to experience the Mongolian way of life without actually going to Mongolia itself – the famous Mongolian Gobi desert, vast areas of extensive desert steppe where nomadic herders look after their grazing livestock and live in traditional Mongolian Ger tents, extends south from Mongolia into Inner Mongolia making tours of the famous grasslands possible from places in Inner Mongolia, such as Hohhot. Great, but best go to Mongolia itself for that if you ask me. OK, maybe not in February, when the -30 degree Celsius Gobi temperatures make it a no-go region for all but the hardiest of have-a-go travellers. 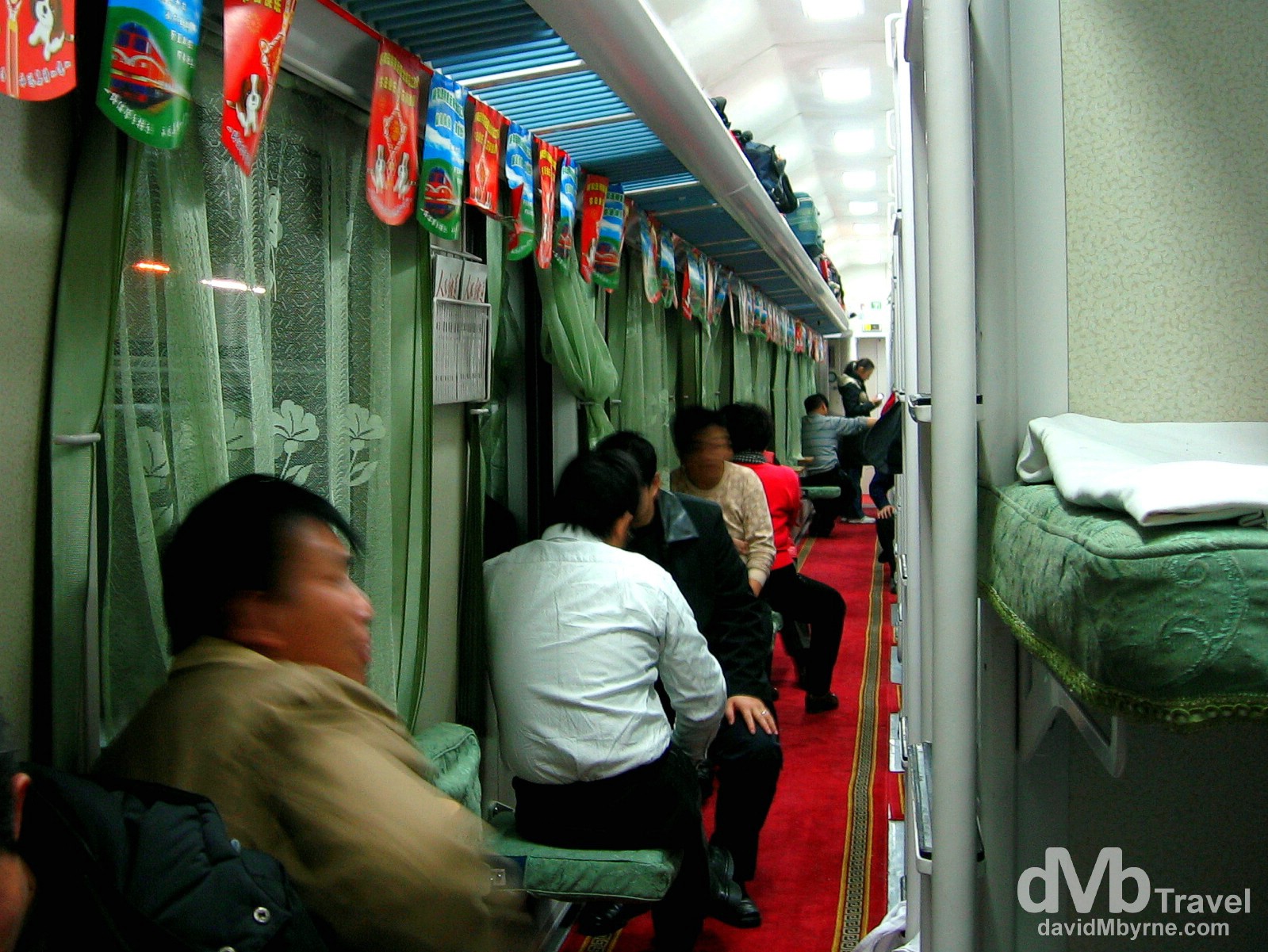 The hard seat class overnight train I took to Beijing last week will scare me for a while yet. But this, the Hard Sleeper class carriage I took to get from Beijing to Hohhot, won’t be leaving such scares. Hard Sleeper is the middle class of travel among the 5 classes of travel available on Chinese trains. Hard Sleeper – it sounds uncomfortable but it’s not. There are numerous compartments the whole length of the carriage, each with 6 sleeping berths – 2 lower, 2 middle and 2 upper – & fold-away communal seating down the length of the aisle. The lower berth is used for communal seating during daylight hours. The middle berth is generally regarded among travellers as the best berth because 1) you can retire to it whenever needed, & 2) you’re not likely to get altitude sickness or a nose bleed (as with the upper berth). There are two higher classes of travel on Chinese trains – Soft Sleeper, which is a closed private compartment with 4 berths, and First Class, which is a closed private compartment with 2 beds and even a shower (First-Class is often more expensive than the equivalent air fare over the same distance). The two lower classes are Soft Seat, which is similar to a standard western train seat that reclines (this class of travel is increasingly rare on Chinese trains) and the lowest class, Hard Seat. A Hard Sleeper berth for this 10 hour overnight trip cost me about €17. The fare roughly doubles as you move up through the classes and halves as you drop down. This Hard-Sleeper class is the ideal way to travel in my opinion – the extra comforts of the higher classes are nice but not needed and it’s well worth paying the extra to avoid the discomforts of the lower classes. This is the way I travel whenever possible. On the train from Beijing to Hohhot, Inner Mongolia, China. February 11, 2006

Hohhot
There’s wasn’t much happening in Hohhot when I arrived off the train from Beijing. Yes it was 8 a.m. and it was Sunday but the city was still eerily quiet. But that changed, & changed in a big way, come nightfall.

Chinese New Year celebration fireworks on the streets of Hohhot. On this particular evening I was drawn out of my room and onto the manic streets of Hohhot by a combination of hunger and the deafening noise of fireworks marking the end the 2 week celebrations for the Chinese New Year. Being out among the crowds (thousands of people everywhere), the deafening noise and the gunpowder smoke was an amazing experience. It wasn’t always safe – people, even young kids, were letting of masses of fireworks on every street and every street corner – but it was was an astonishing scene, akin to a war zone (not that I’ve ever been in one of course). I’d only ever witnessed a fireworks display from a predetermined safe distance but these displays were within feet of spectators as you can see from this picture. The fireworks in this particular display just about cleared the tops of the buildings before exploding. Hohhot (