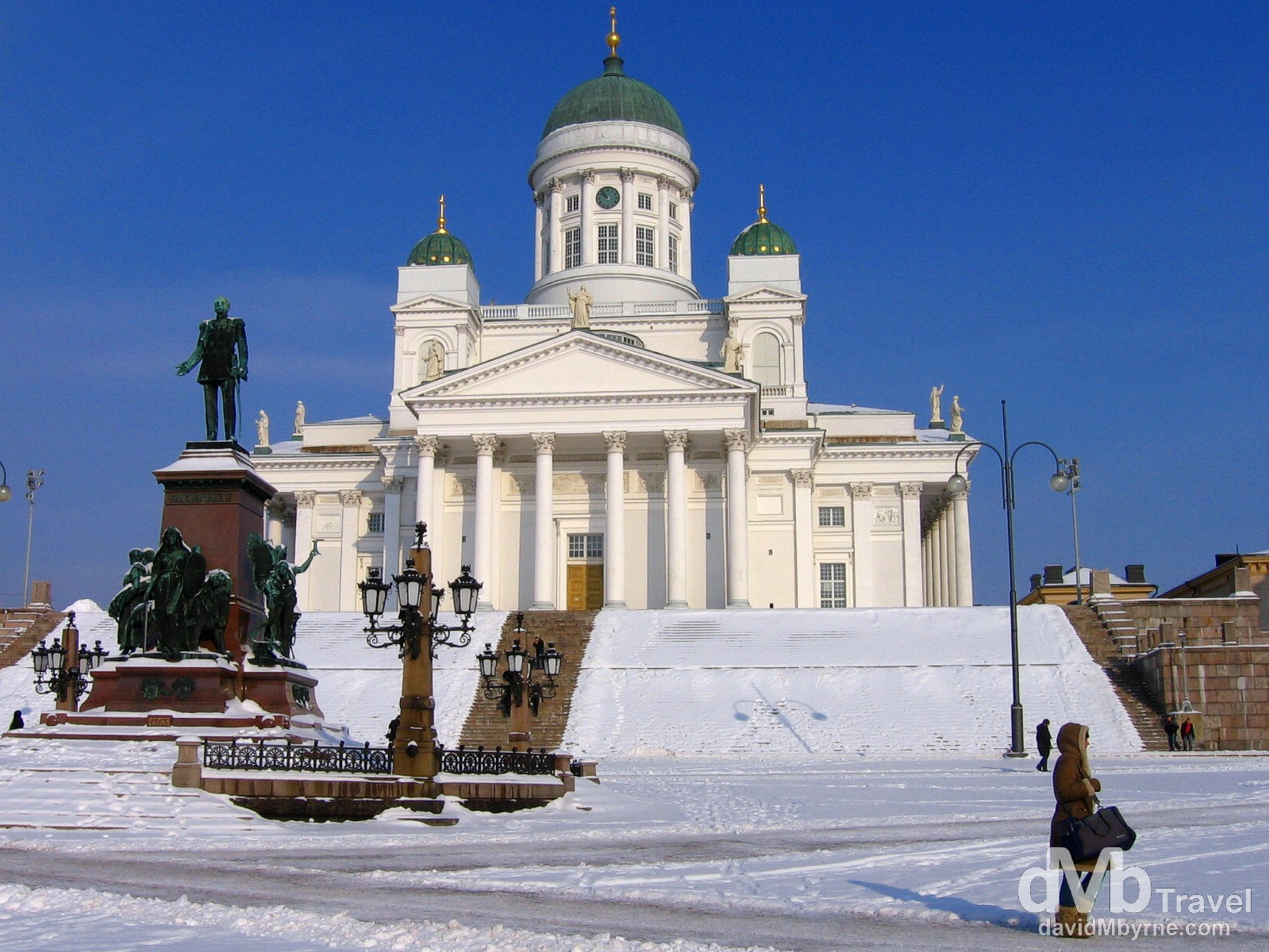 That was quick. My first visit to Helsinki, the comatosed cafe-culture capital of Finland, has come & gone, just like that. It could only be classed as a fleeting visit. Five hours in total I spent in the city between disembarking the overnight bus from Saint Petersburg, Russia, early this morning to boarding the ferry in Helsinki harbour this afternoon to take me the short distance across the Baltic Sea to Tallinn in Estonia, my present location. 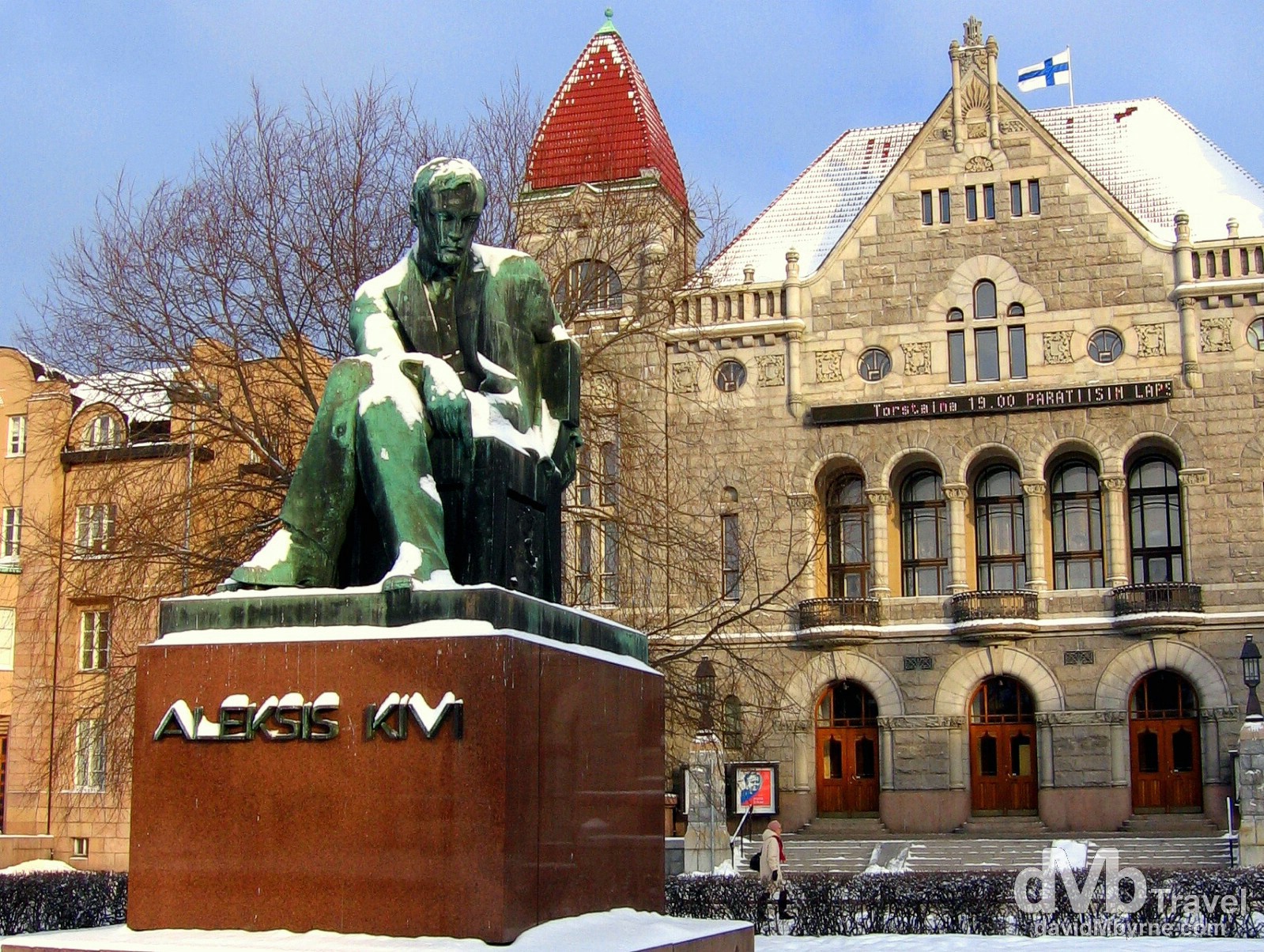 I arrived in Helsinki this morning armed only with a leaflet on the city, a leaflet I acquired in my hostel in Moscow a few days ago. The leaflet tried but it had difficulty talking up the city’s attractions. As a result I judged, while standing in Helsinki Train Station at 9 a.m. this morning, that the few hours I had at my disposal would be sufficient to enable me to complete a quick loop of the key city attractions, something the charming girl manning the train station’s Tourist Information Office confirmed. And so that’s what I did, promising myself as I went that in the event of me ever returning to Helsinki that I’d devote more time to what is undeniably a beautiful, clean & modern city, something starkly obvious having arrived in the city after a few weeks travel in rough-around-the-edges Russia. Add to that the fact that the (very) few Finns I saw on the streets of Helsinki were neatly attired, content looking, bilingual members of Euroland (home) and I immediately grew an affinity with the Finnish capital. If only I had more time. 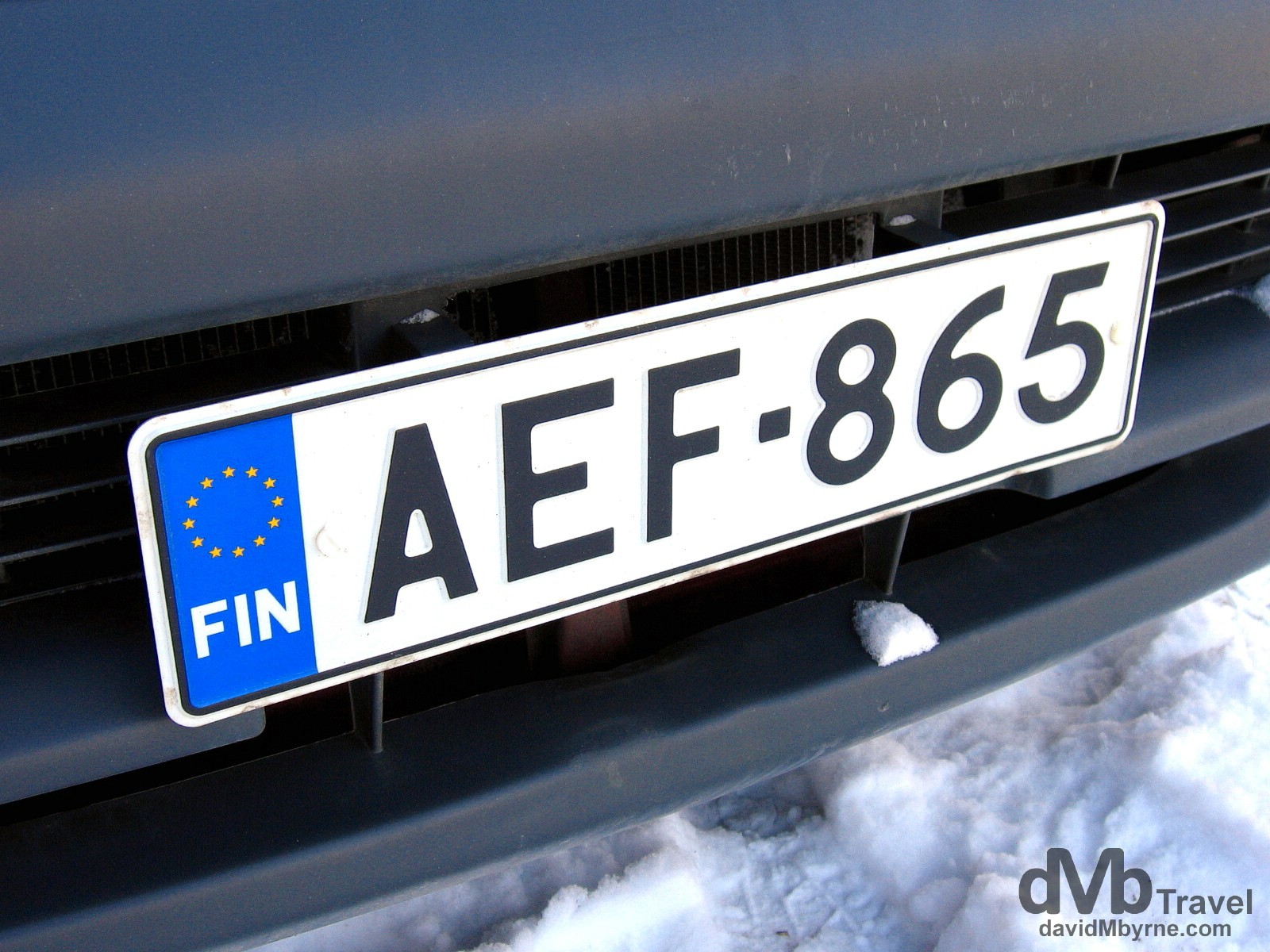 A car license plate on the snowy streets of Helsinki, Finland. March 1, 2006.

Temppeliaukio Church, a.k.a. The Rock Church 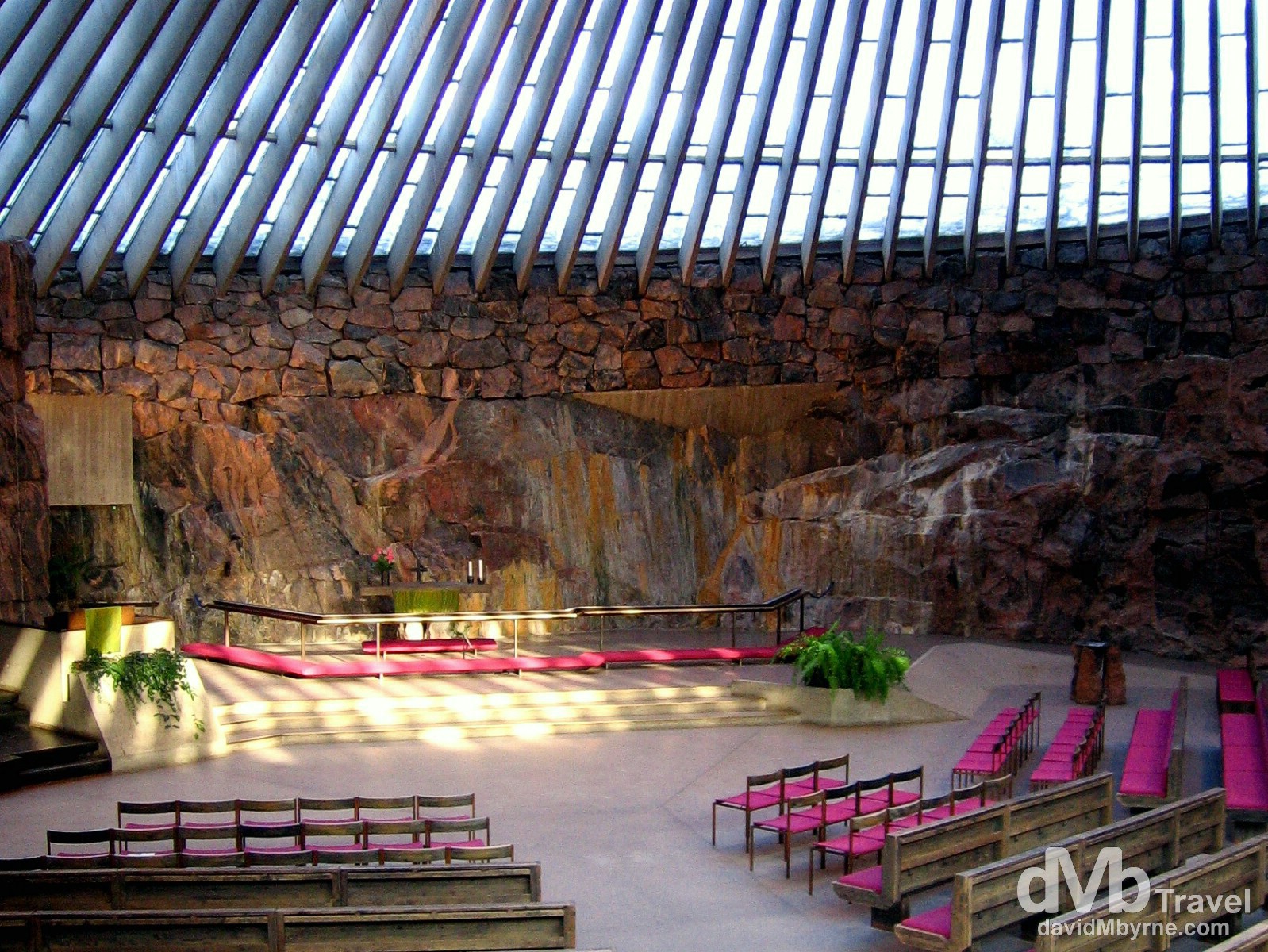 The Temppeliaukio Church, know as the Rock Church, was blasted out of solid bedrock in a bid to preserve the rock formation surrounding it. The result is a uniquely special space with amazing acoustics and a capacity to seat nearly 1000 people. Surrounding the church is an outer wall of quarried stone, piled and bound together with steel bindings. This not only deflects the outside noise but also prevents people from walking on the rock above, which is easy as the roof of the church is on street level. A copper dome, joined to the rock by reinforced concrete beams and boasting 180 skylights, creates the cover. All the working methods of the structure are deliberately visible, such as water running down the cracks of the rock on the far wall behind the altar. And for good measure there is seemingly an air-raid shelter underneath the church that can accommodate 6,000 people. What a great idea; a church with an air-raid shelter (although it’d be a sad day indeed if it was ever used as such). I found the church empty and it’s very easy to become mesmerised after a few moments sitting beneath the copper dome in the quiet and cool atmosphere with the light passing in through the skylights. The whole place has a quite unpretentious glory and rawness. Quite a find. Temppeliaukio Church, aka the Rock Church, in Helsinki, Finland. March 1, 2006.

The city’s blue-ribboned tourist attraction is definitely Helsinki Cathedral overlooking the central Senate Square. Still used for everyday religious functions, the big, white Evangelical Lutheran cathedral is the seat of the Diocese of Helsinki. It was built as a tribute to the Grand Duke, Nicholas I, the Tsar of Russia and until Finnish independence from Russia in 1917 it was called St. Nicholas’ Church. The square’s central monument is the bronze statue of Alexander II, Nicholas’ son and the grandfather of Nicholas II, the last Tsar of Russia. The statue, dated 1863, commemorates the year when Alexander II re-established the Diet of Finland and initiated several reforms increasing Finland’s autonomy from Russia. The statue comprises Alexander on a pedestal surrounded by figures representing the law, culture and the peasants. Senate Square in Helsinki, Finland. March 1, 2006. 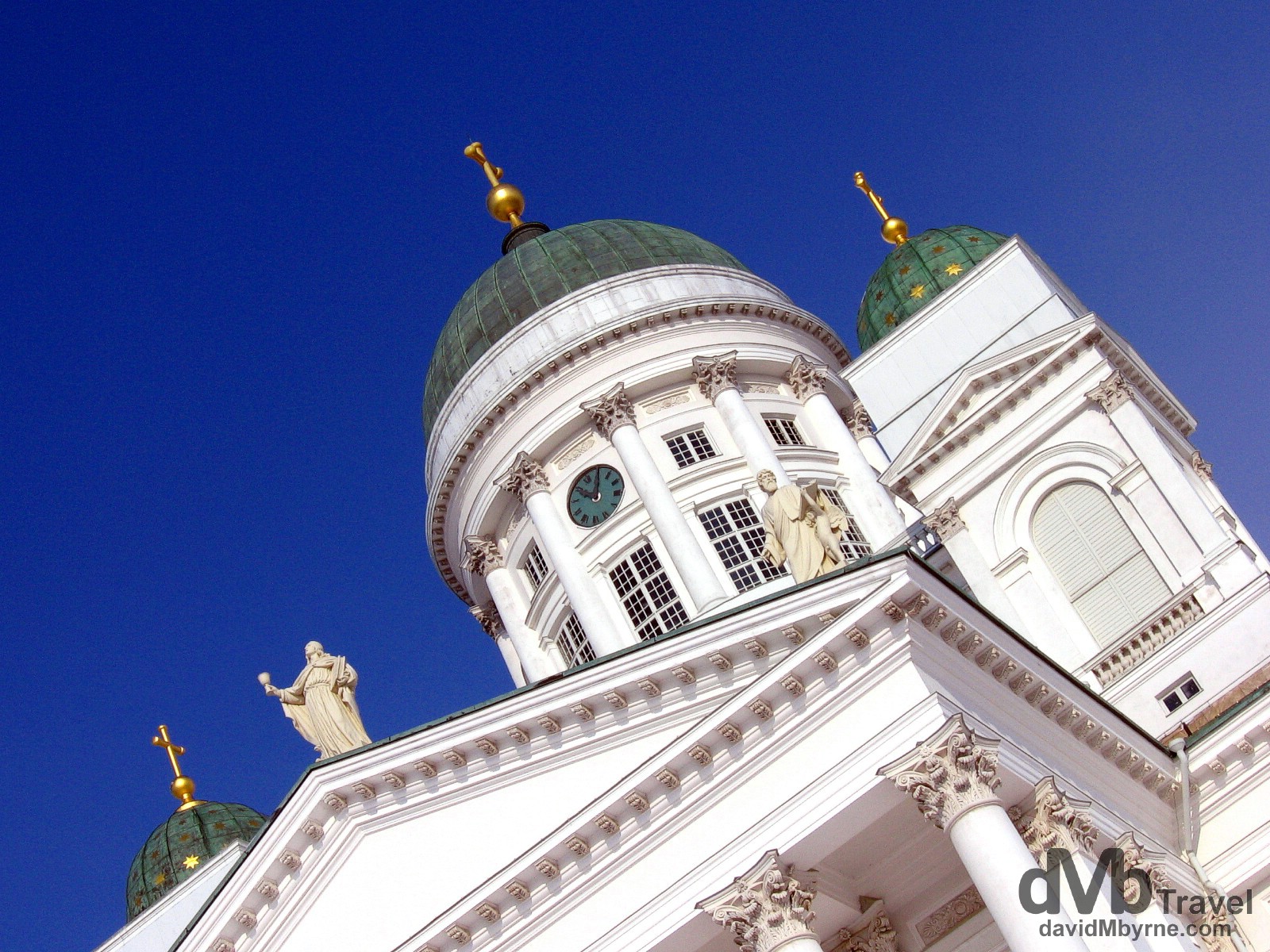 A distinct landmark in central Helsinki with a tall green dome surrounded by four smaller domes, Helsinki Cathedral was built in neoclassical style from 1830-1852. It was originally designed by Carl Ludvig Engel with the cathedral forming the climax of the whole Senate Square, the surroundings of which were also designed by him. The building was later altered by his successor, Ernst Lohrmann, with alterations including, most notably, the addition of the four small domes, two separately standing bell towers, and zinc statues of the 12 Apostles on the roof. Its worldly claim to fame? It boasts the largest uniform collection of zinc sculptures in the world. Helsinki Cathedral, Senate Square, Helsinki, Finland. March 1, 2006. 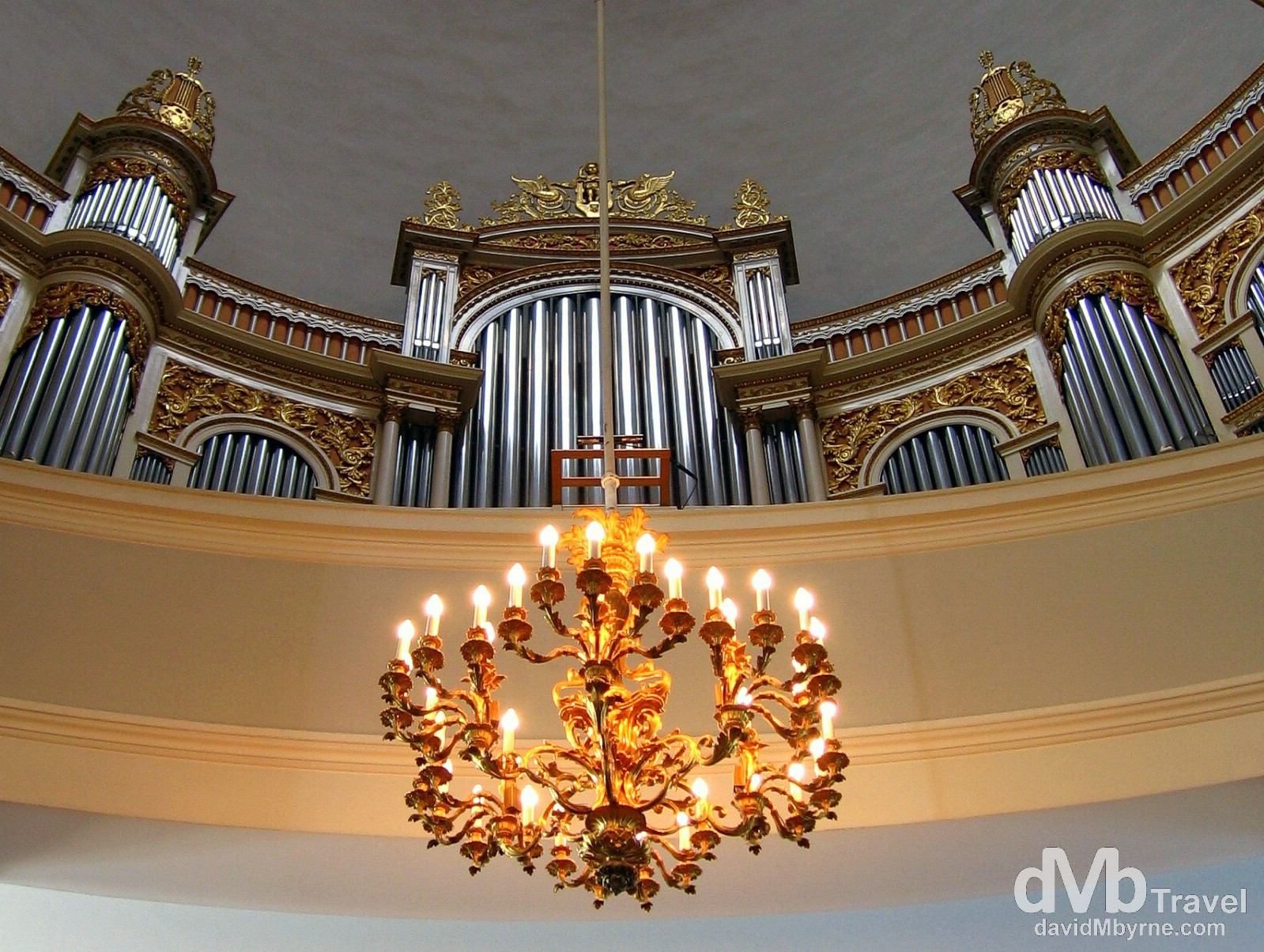