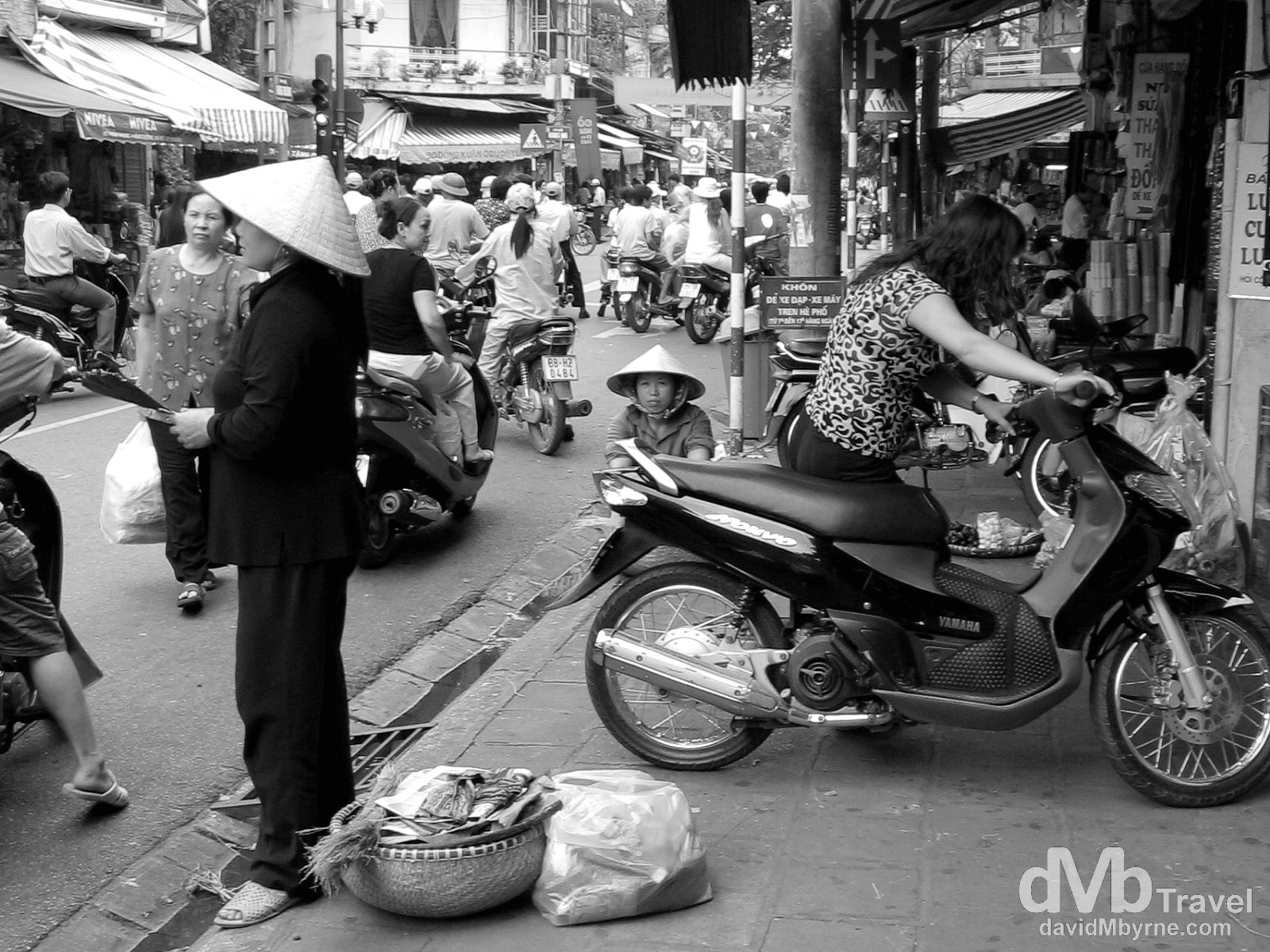 Hanoi, capital of the Socialist Republic of Vietnam, has firmly shaken off its unwelcoming attitude to travellers and has become one of the most beguiling cities in Asia. It is (mostly) slow-paced and pleasant, while its lovely landscape of lakes, shaded boulevards and verdant public parks is home to beautiful and diverse architectural treasures, colonial French homes and astounding modern skyscrapers. Its bustling markets, thriving nightlife and excellent food are attracting visitors of every stripe to this ancient city. Birthplace to so much of Vietnam’s traditional culture, Hanoi, more than any other city in Vietnam, is a unique fusion of old and new. It personifies the spirit of historic Vietnam in the temples, monuments and pockets of ancient culture along the narrow streets of the Old Quarter, yet perfectly reflects the rapid changes sweeping the country as Hanoian yuppies sip cappuccinos in roadside cafes while comparing cell phones.

Activity on the streets of the Old Quarter of Hanoi (

It’s almost 3 years since I was last in Hanoi and it’s really great to be back in a city I have very fond memories of. Not much has changed in those 3 years, apart from the city being better connected than it was back in 2002: it is still, like all Vietnamese cities, a scooter lovers dream come true; the same offers open to travellers 3 years ago are still on offer to travellers today and prices seem to be about the same, if not a bit cheaper; the city is still awash with reasonably priced ($5-6 a night), high standard accommodation; the food is still as simple & delicious as I remember it being; and the Bia Hoi, Vietnamese street beer, is still officially the cheapest beer in the world (it’s cheaper than water here in Hanoi) and still readily available on every street corner. All in all Hanoi is the same as I remember it being. It’s the same same but different, as the saying in Vietnam goes.

Activity in a busy section of the Old Quarter in Hanoi. Like most budget minded tourists in Hanoi, I’m staying in the tourist haven Old Quarter of the city, a district of narrow, tree-lined, scooter infested streets full of ancient traders and general mishmash that’s unique to Hanoi. The Old Quarter has been a lively trading centre since the 13th century when Hanoi’s artisan guilds established themselves here. Since then each of the Old Quarter’s 36 narrow streets have been named after the principal commodity produced and sold on the street – Paper Street, Silver Street, and Hat Street etc. While most of the streets now focus on different commodities, several continue to produce the same goods they have for hundreds of years. It’s an amazing, assault-on-the-senses district to stroll around, full of the classic sights and sounds of Vietnam: traders in conical hats; traditionally dressed schoolgirls on their bikes; people zipping here and there on their scooters. Hanoi, Vietnam. September 5th 2005.

Ho Chi Minh || His Mausoleum & Museum
The Vietnamese had lived under Chinese domination for 1,000 years followed by almost 100 years of French colonial rule (1858-1954) before Ho Chi Minh founded the Indochinese Communist Party in 1930. In September 1945 he declared the Democratic Republic of Vietnam (DRV) & after a long but ultimately successful resistance struggle against the French (who were defeated in 1954) and a well publicised Civil War – commonly referred to as the Vietnam War & fought between the American-supported South and the ultimately victorious Communist North) the country was officially reunited in 1976 as the Socialist Republic of Vietnam. Today Vietnam remains one of the poorest countries in the world; while the country’s economy suffered during the Vietnam War, most of today’s economic problems result from government policies implemented since the unification of the country. In present-day Vietnam Ho Chi Minh, affectionately known as Uncle Ho, is viewed as a God – his face adorns all coins and notes and you’re never too far away from a picture of him smiling down on his adoring public. Even though he expressed no desire for a mausoleum to be built in his name the Vietnamese went and built one anyway after his death in 1969, an enormous concrete cubicle surrounded by guards in snowy, bleached-white uniforms. Visiting the mausoleum – where unsurprisingly photography isn’t allowed – provides an interesting insight into how the visitors, from elderly VC comrades making the pilgrimage from the South to student groups from foreign nations – react to the sight of a waxwork-esque Uncle Ho. Though the Vietnamese as a whole are disappointed with communism, most show deep respect and admiration for Ho himself – he is seen as the liberator of the Vietnamese people from colonialism & the country’s subsequent economic mismanagement is often viewed as the misdoing of Ho’s comrades and successors. 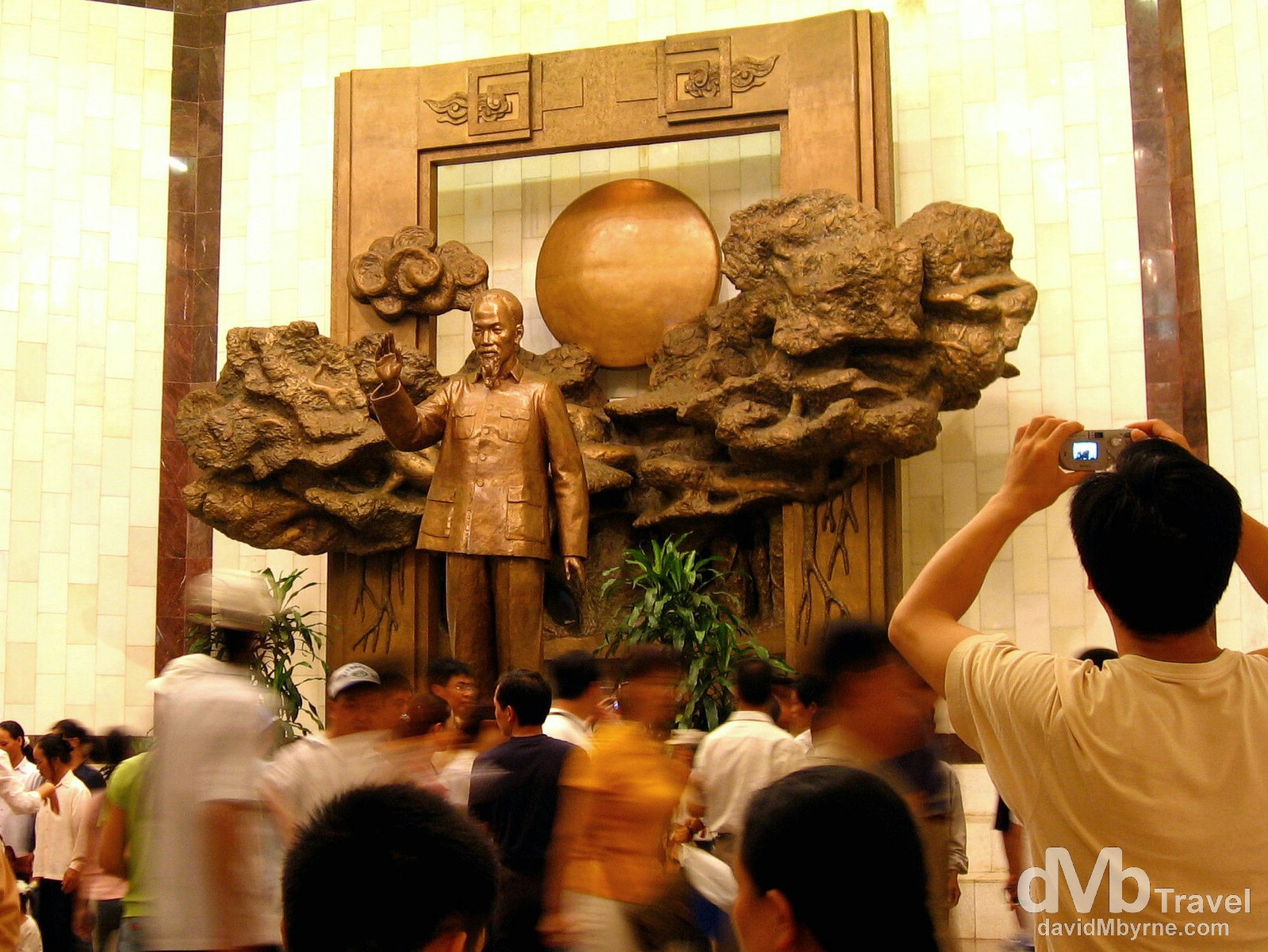 A statue of Ho Chi Minh in the lobby of the Ho Chi Minh Museum which is adjacent to the Ho Chi Minh Mausoleum & which does allow photography. A somewhat confused museum, it is recommended by a certain guidebook to bring along an English-speaking guide to fully understand the museum noting that “some of the symbolism is hard to figure out”. Indeed. That said, and unsurprisingly, the areas of the museum detailing the Vietnamese success against the USA in the Vietnam War are easy to decipher, no matter what language you speak. The Ho Chi Minh Museum, Hanoi, Vietnam. September 6th, 2005.

Bia Hoi, meaning fresh or draught beer, is Vietnam’s very own, brewed on-site, draught beer. It’s a Vietnamese institution and at 1,500 Vietnamese Dong a glass (€0.13) it’s officially the cheapest beer in the world. The country has no national or regional breweries so brand draught beer is unheard of. Bia Hoi is a light, refreshing Pilsner, first introduced to Vietnam by the Czechs. And as it’s brewed on-site without preservatives it is meant to be enjoyed immediately. People sit on little plastic seats on street corners and down glass after glass. A Bia Hoi crawl is a great way to get beneath the skin of the Vietnamese capital and with US$10 in your pocket one could afford a lot of beers. 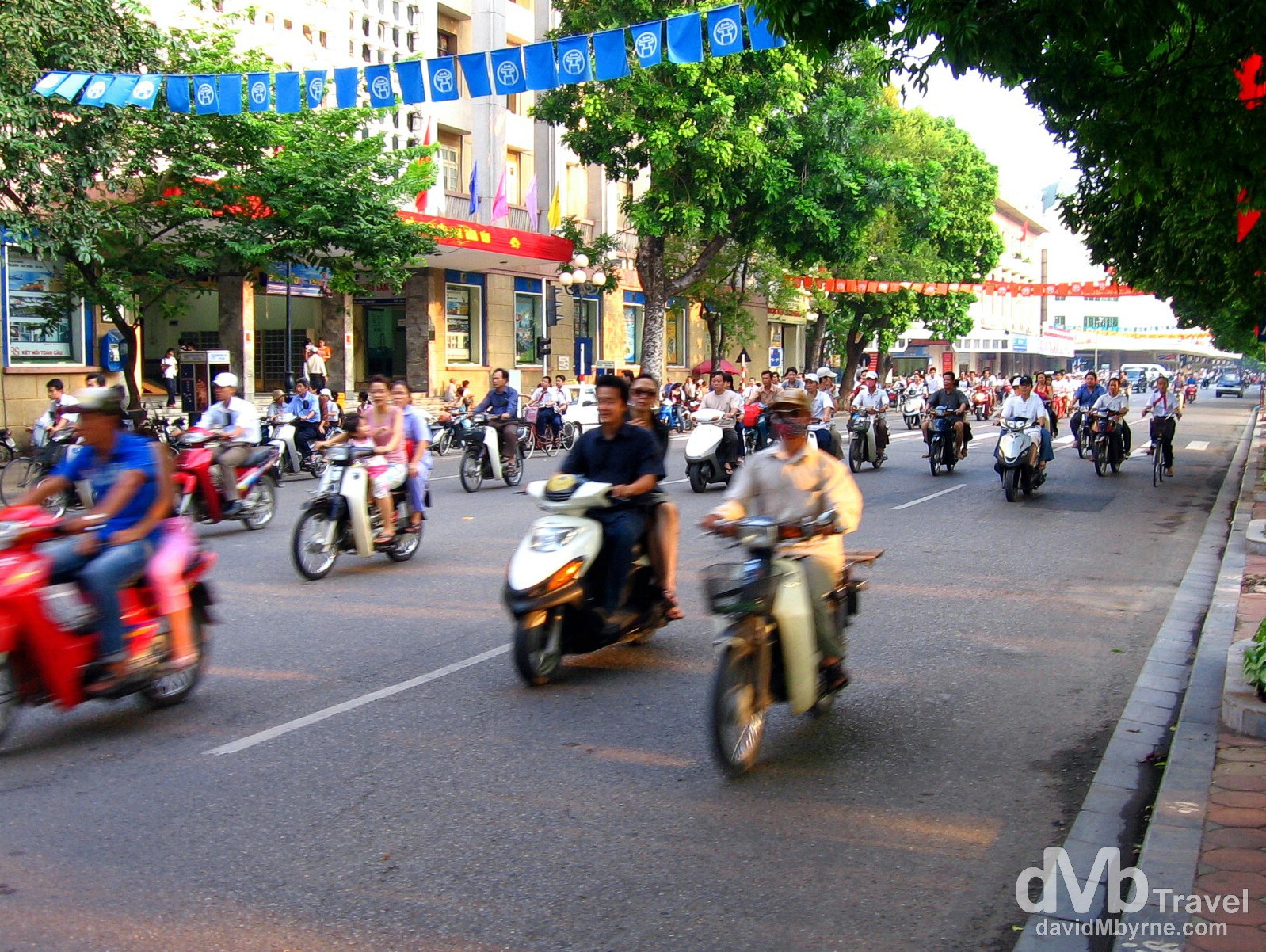 Scooters on the streets of Hanoi, Vietnam. September 5th, 2005. 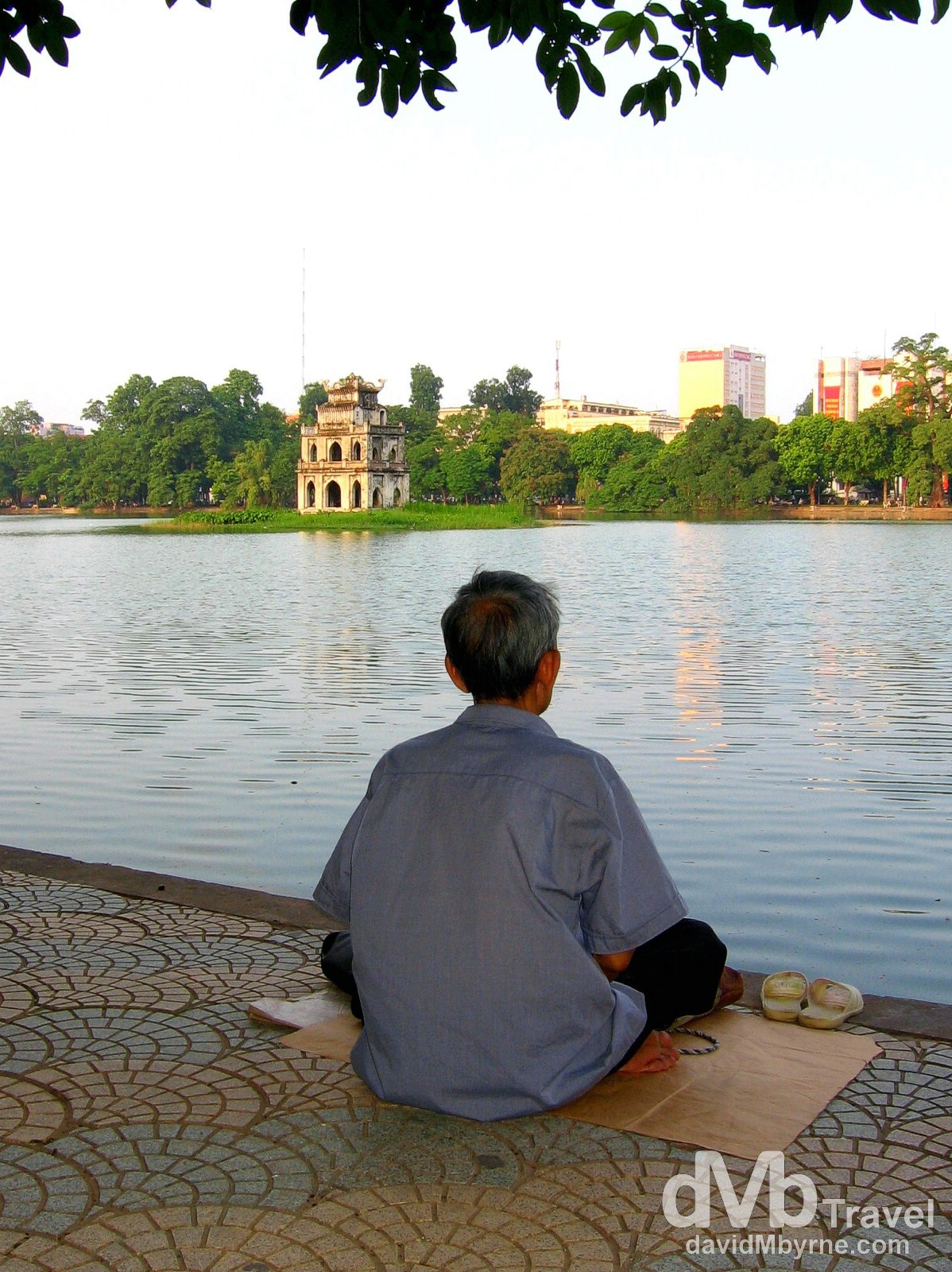 The attractive centre of Hanoi is built around Hoan Kiem Lake, an enchanting body of water offering an escape from the rush of the surrounding, scooter-infested streets. Legend has it that in the mid-15th century Heaven sent Emperor Ly Thai To a magical sword which he used to drive the Chinese out of Vietnam. One day after the war he stumbled upon a giant golden tortoise swimming in the lake. The creature grabbed the sword and disappeared to the bottom of the lake. Thus the lake is now known as Ho Hoan Kiem (Lake of the restored sword) because the tortoise restored the sword to its divine owners. The tower in the background is Thap Rua (tortoise tower). It is topped with a red star and is often used as the emblem for the city. Hanoi, Vietnam. September 5th, 2005.