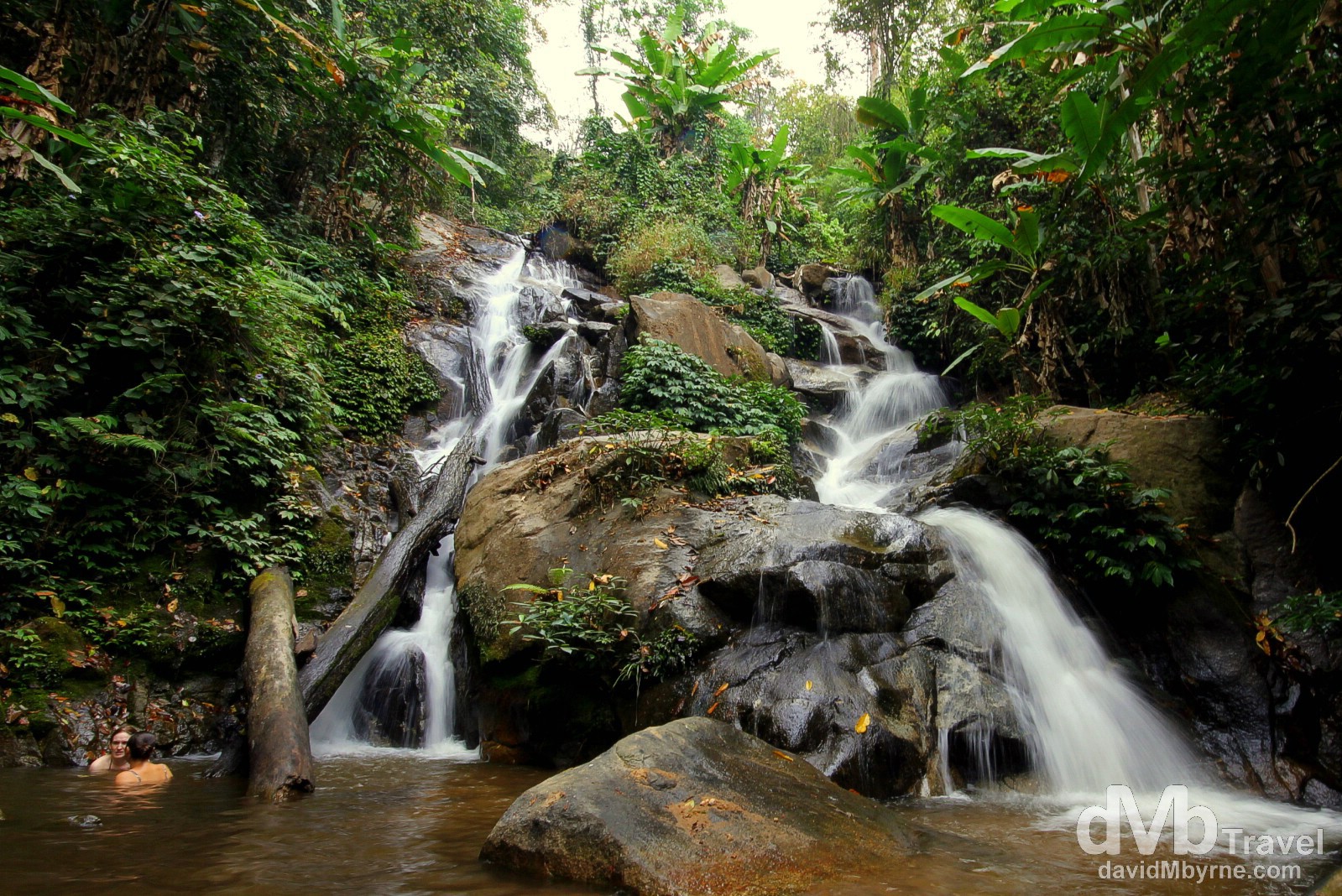 As I type I’m in the Akha Hill guesthouse situated in the mountains 23 kilometres outside Chiang Rai, itself a 3-hour bus ride north of Chiang Mai. I’m in extreme northern Thailand, in the so-called Golden Triangle region not too far from the border with Burma (some call it Myanmar). I arrived here a few hours ago, when it was bright. The drive here from Chiang Rai saw me pass through & around dense jungle & scorched hillsides, the latter being responsible for the constant smoky-haze in the air, not to mention the poor visibility – it’s a problem right now not only here but in the whole Golden Triangle region. I don’t know the name of village I’m in; I can’t see a name listed anywhere & if I did it probably wouldn’t even register with me as the village name anyway. Not that the name is important. The unknown village & my 400baht-a-night (€10) bamboo hut both overlook a majestic valley surrounded by tea plantations, rice fields, waterfalls & jungle. Lots of jungle. I’ve just had dinner (Pad Thai) and now I’m sitting on the bamboo veranda of what passes for the guest house restaurant staring out into the darkness listening to the cacophony of soothing sounds coming from the creepy crawlies who call the jungle home; it’s remoteness in sound & (black) vision. I’ve maybe been to remoter places during my travels (although not many), but I’ve certainly never blogged from somewhere as remote as this. Having Wi-Fi access here is a sign that, & the remoteness aside, travellers demands are being catered to in a way I’d never have thought they would be (to be honest I’m impressed they have electricity here). But it’s a sign of the times – rather than sit around drinking Chang beers while scrabbling in paper journals, travellers can now blog, check facebook & skype loved ones, while drinking Chang beers. It’s just one more convenience to make the world feel like the smaller place it has become.

Sitting in a pool at the base of the Houykeaw Waterfall. Remoteness is the attraction in this part of the world so needless to say there’s not a whole lot to see should you make the trek up here into the northern Thai jungle. That is assuming you want to stay on the right side of the law (well recommended); the 950,000 square kilometre Golden Triangle region is notorious as one of Asia’s two main opium-producing areas, the other being Afghanistan, which today is the world’s largest producer of heroin, a title this region held until the early 21st century. I took a walk in the jungle today. I saw a few rivers (more streams really) before eventually finding a waterfall. I may not know the name of the village I’m presently in but this is the Houykeaw Waterfall, so says a sign nearby. Doihang (