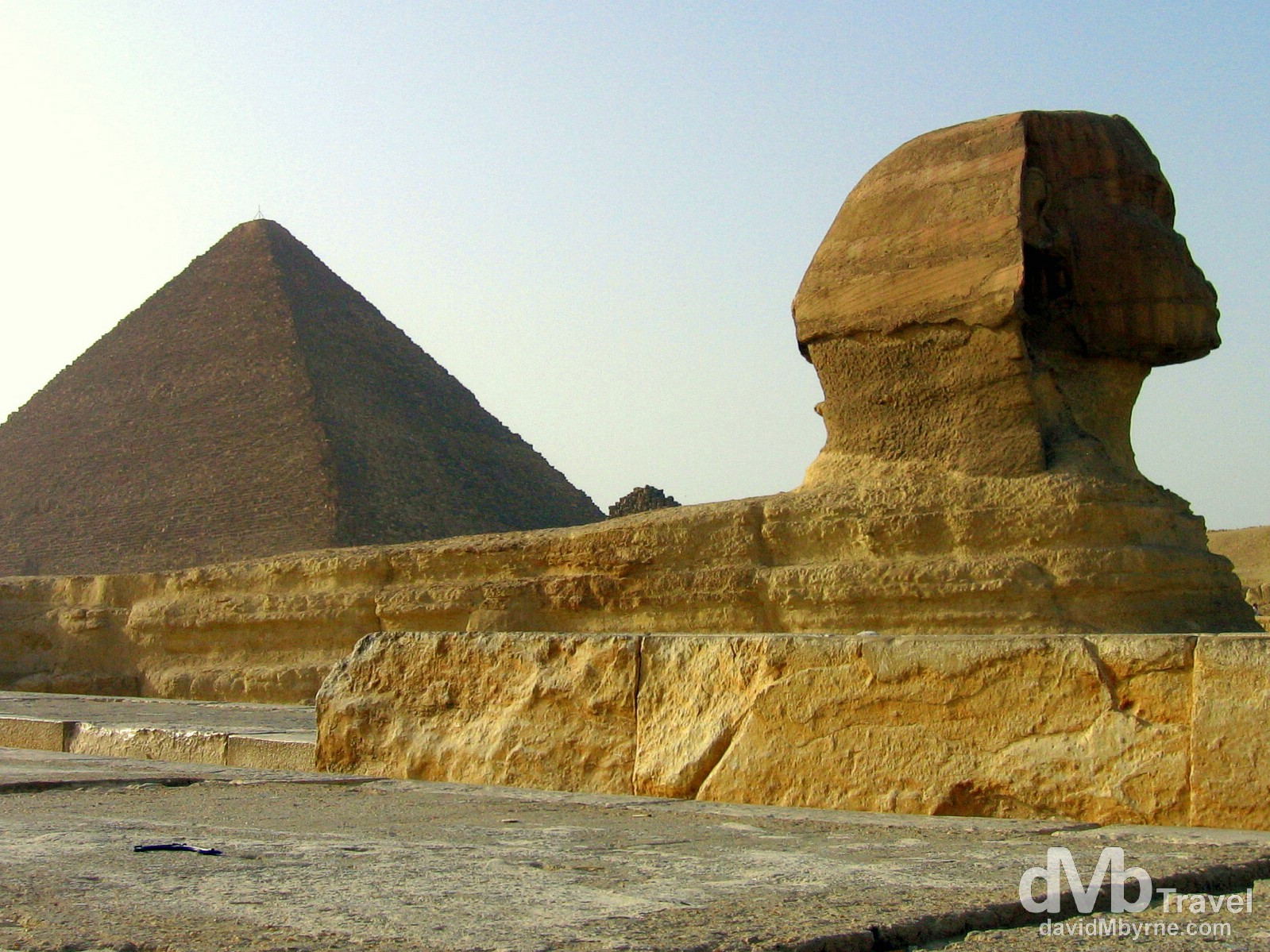 Today we paid a visit to the Cairo suburb of Giza to see those ultimate monuments of antiquity, and arguably the most famous monuments in the world, the Great Pyramids of the Giza Plateau.

All things dread time, but time dreads the Pyramids 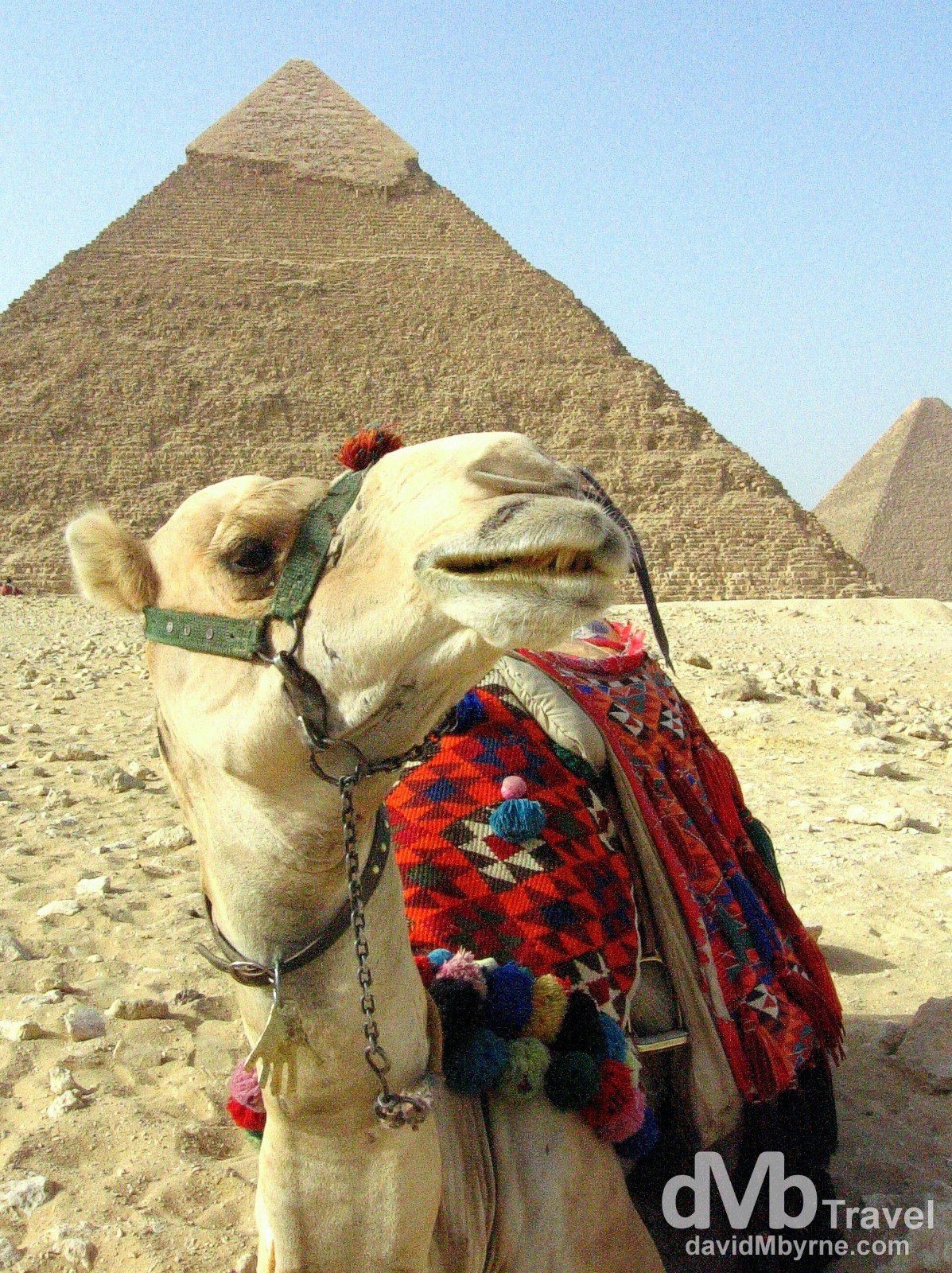 Getting to the Giza Plateau, only some 25 kilometres from downtown Cairo, via public transport was an exercise in patience & time wasting if ever there was one. And of course it goes without saying that attempting to take in the sight of the Great Pyramids themselves once in their presence was the usual exercise in dealing, badly or otherwise, with the touts who, & even here at the most famous attraction in a country full of famous attractions, are as ubiquitous and relentless as ever. 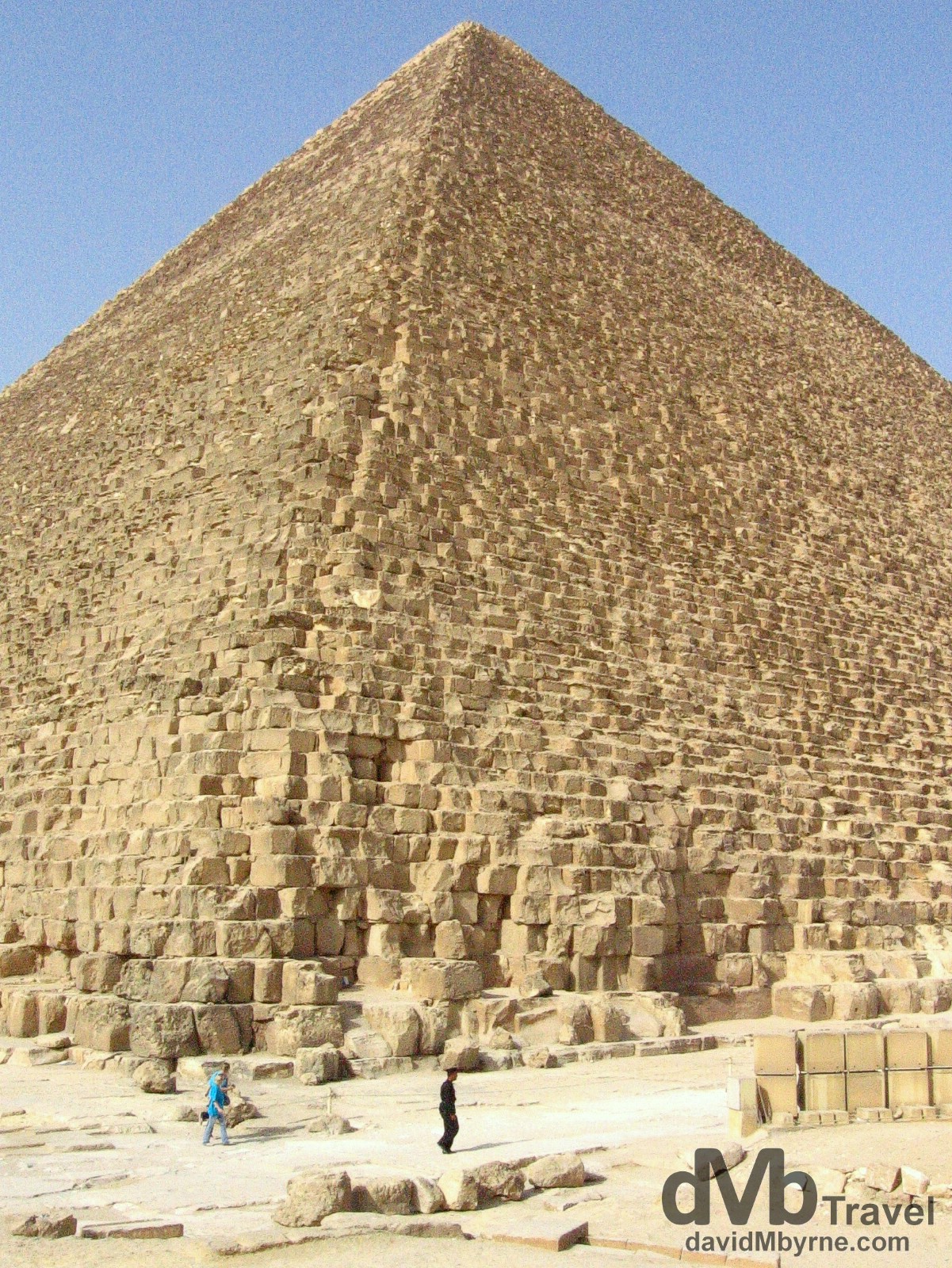 At the base of The Great Pyramid of Giza, a.k.a. the Pyramid of Khufu. Of the original Seven Wonders of the Ancient World, only the Great Pyramid of Giza, the largest & oldest of the three Giza pyramids, has withstood the test of time – it’s the only one remaining largely intact. While it looks imposing from afar, it’s only when you stand at or near its base, as seen here, that it’s gigantic mass becomes apparent. When completed in 2600 BC it originally stood 146.5 metres high and measured 230 metres along its base, but the removal of its casing stones has reduced these dimensions by three metres, an acceptable height loss for 4600 years of standing around I’d say. The pyramid is estimated to weigh 6 million tons and contain over 2.3 million blocks whose average weight is 2.5 tons (though some weigh almost 15 tons). The Great Pyramid of Giza / Pyramid of Khufu, Giza Plateau, Giza, Egypt. April 13, 2008

The Pyramids of Giza
Yes they are big, yes they are impressive, and yes they are still a mystery. The three Great Pyramids of Giza – Khufu, Khafre & Menkaure – are probably the world’s most famous enigma – they have puzzled people ever since they were built & questions and answers as to how and why they were constructed have inspired scholarly and crackpot speculations for centuries. Whereas the Ancient Greeks vaguely understood their function, the Romans were less certain; medieval Arabs believed them to be treasure houses with magical guardians; and early European observers reckoned them the Biblical granaries of Joseph. The mass of theories, claims and counterclaims about how and why the pyramids were built contributes to the sense of mystery that surrounds them. Most recently a French architect claims to have solved the mystery of how they were built, claiming it was accomplished by using an inner ramp to lift the massive stones into place. Other theories contend that the millions of stones were pushed into place using external ramps. Egyptologists have refuted almost all theories put forward thus far, both crackpot and otherwise. However, there is wide agreement on the pyramids function. Archaeologists now agree that they were built as containers for royal tombs and nothing else, a container that was to preserve the Kings (pharaohs) ka, or double, a vital force which emanated from the sun-god to his son, the King, who distributed it among his subjects and the land of Egypt itself. Mummification, funerary rituals, false doors for his ba (soul) to escape, model servants and anniversary offerings – all were designed to ensure that his ka enjoyed an afterlife similar to its former existence. 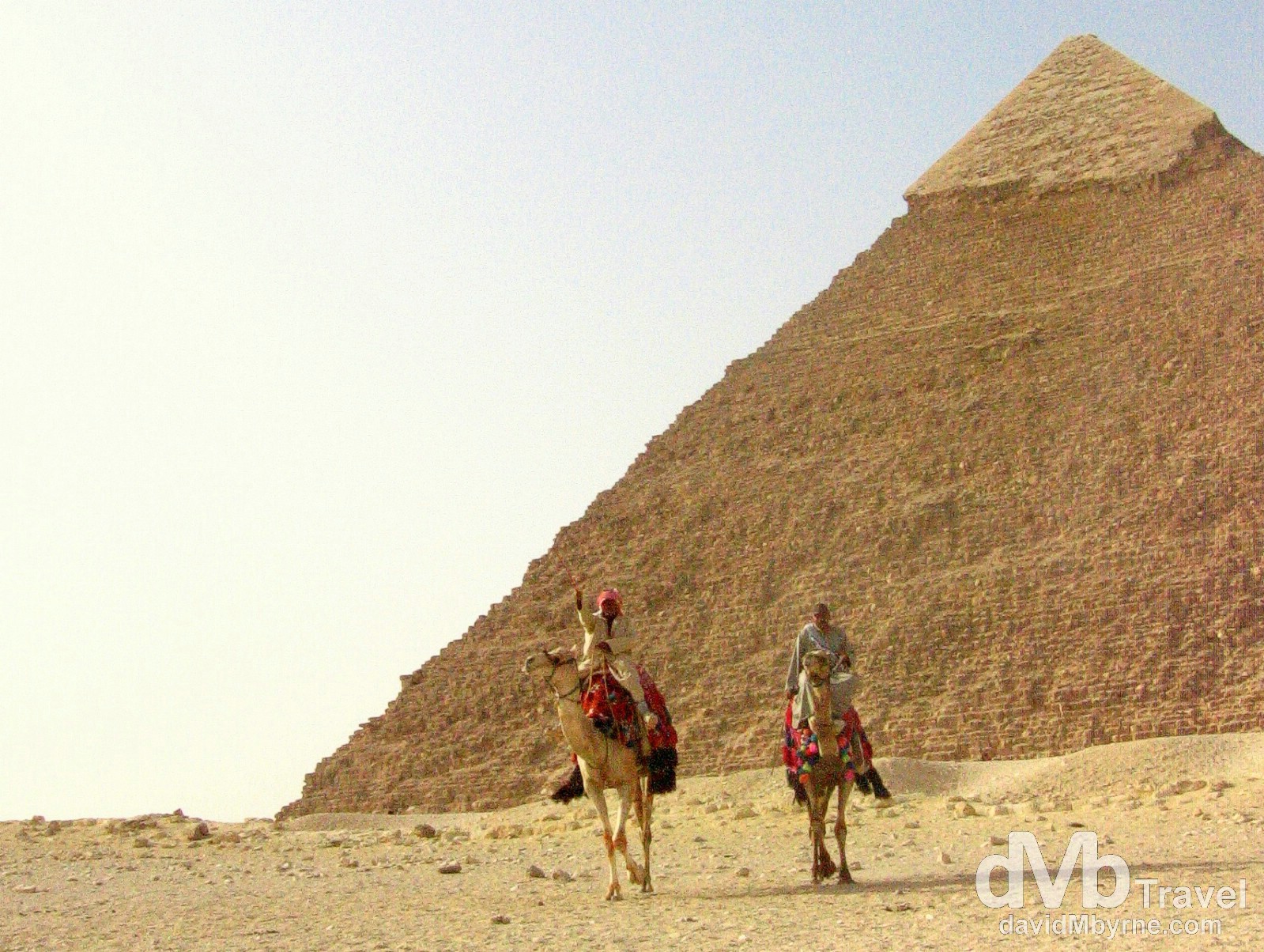 Of course getting close to any of the Giza pyramids requires you to run the gauntlet of the numerous touts posing as ticket collectors, bogus guides offering unnecessary services, and legions of horse/camel handlers. And that is before you have to deal with the Nagama Bedouin (a member of a nomadic tribe of Arabs common in the Sinai peninsula of Egypt and the deserts of Jordan) waiting for you inside on the Giza Plateau itself. These two Bedouin camel handlers, fronting the second of the Giza Plateaus pyramids, the Pyramid of Khafre, were approaching us to embark on the hard sell of a camel ride. We gave in, spending 60 Egyptian pounds (€7.30) for two camels for 20 minutes, a price we felt was more than reasonable considering the thrill of riding a camel on the Giza Plateau with the pyramids in the distance. Well recommended but remember, haggle hard. The Bedouin will be expecting nothing less. The Giza Plateau, Giza, Egypt. April 13, 2008.

Pat & I failed to come up with any answers to the mystery of the pyramids during the limited time we spend gazing up at the 4600-year-old structures, both from their base and from atop camels. We also had no answers as to how the authorities could allow so many touts (touts seem to be a common thread in my entries from Egypt) onto the desert-like Giza Plateau to endlessly harass tourists. Our decision to take a 20-minute camel ride was taken mainly to avoid any further tout approaches more than it was taken for our own enjoyment. That said, it was a thoroughly enjoyable experience and the highlight of our trip to the Giza Plateau.

A practical joke played on history.

– Anonymous visitor commenting on the Pyramids 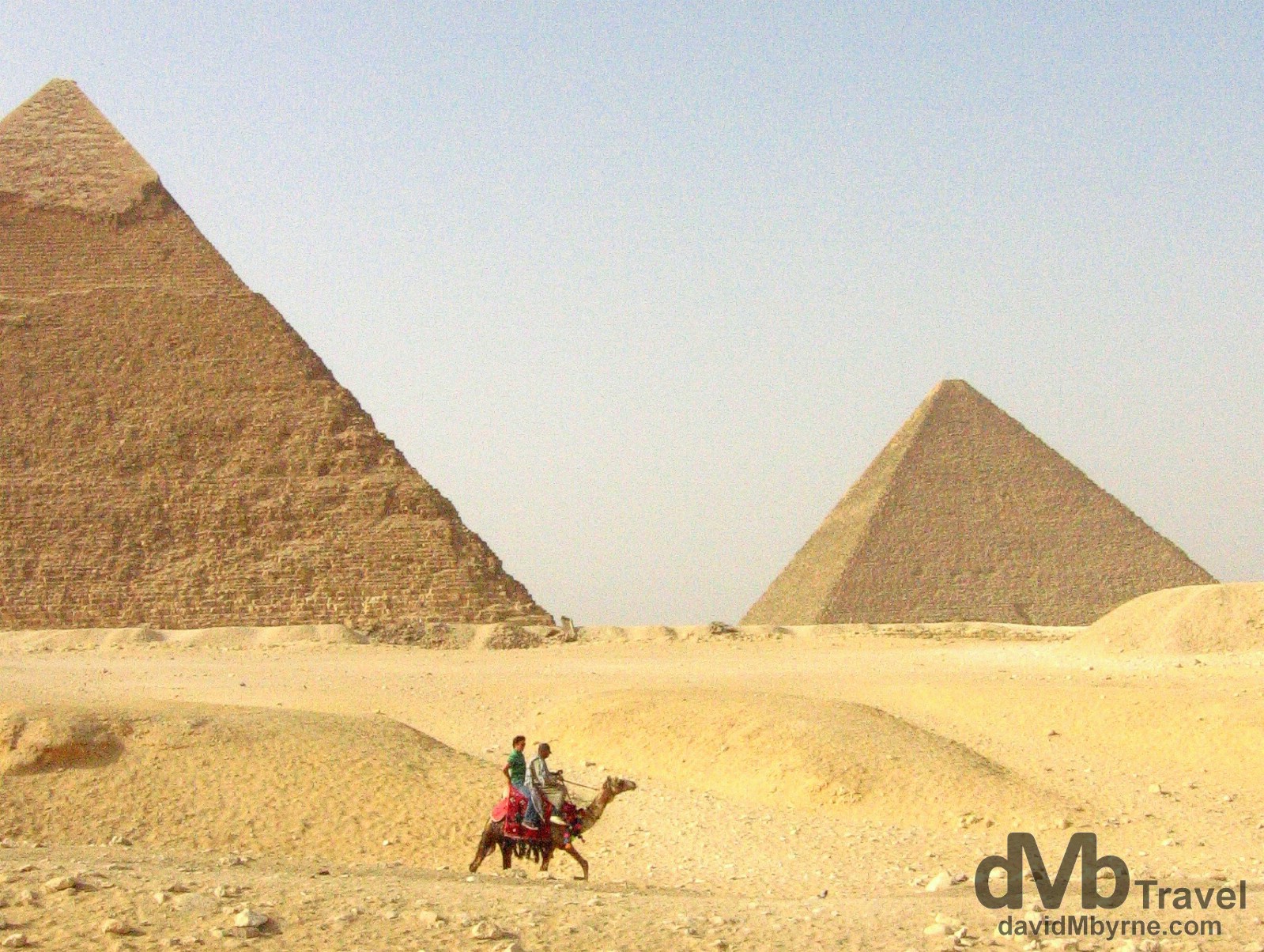 Pat aboard his camel with the Great Pyramid of Khufu (right) and the Pyramid of Khafre (left) in the background. The Pyramid of Khafre is situated on higher ground, with an intact summit and steeper sides, and as a result it seems taller than the larger and taller Khufu Pyramid. Built by Khufu’s son, Khafre, its base originally covered 214.8 m² and its weight is estimated at over 4.8 million tons. Classical writers believed that the pyramid had no entrance but when Giovanni Battista Belzoni, a prolific Italian explorer of Egyptian antiquities, located and blasted open the sealed portal on its north face in 1818 he found that Arab tomb robbers had somehow gained access nearly a thousand years earlier, undeterred by legends of an idol “with fierce and sparkling eyes” bent on slaying intruders. The Giza Plateau, Giza, Egypt. April 13, 2008. 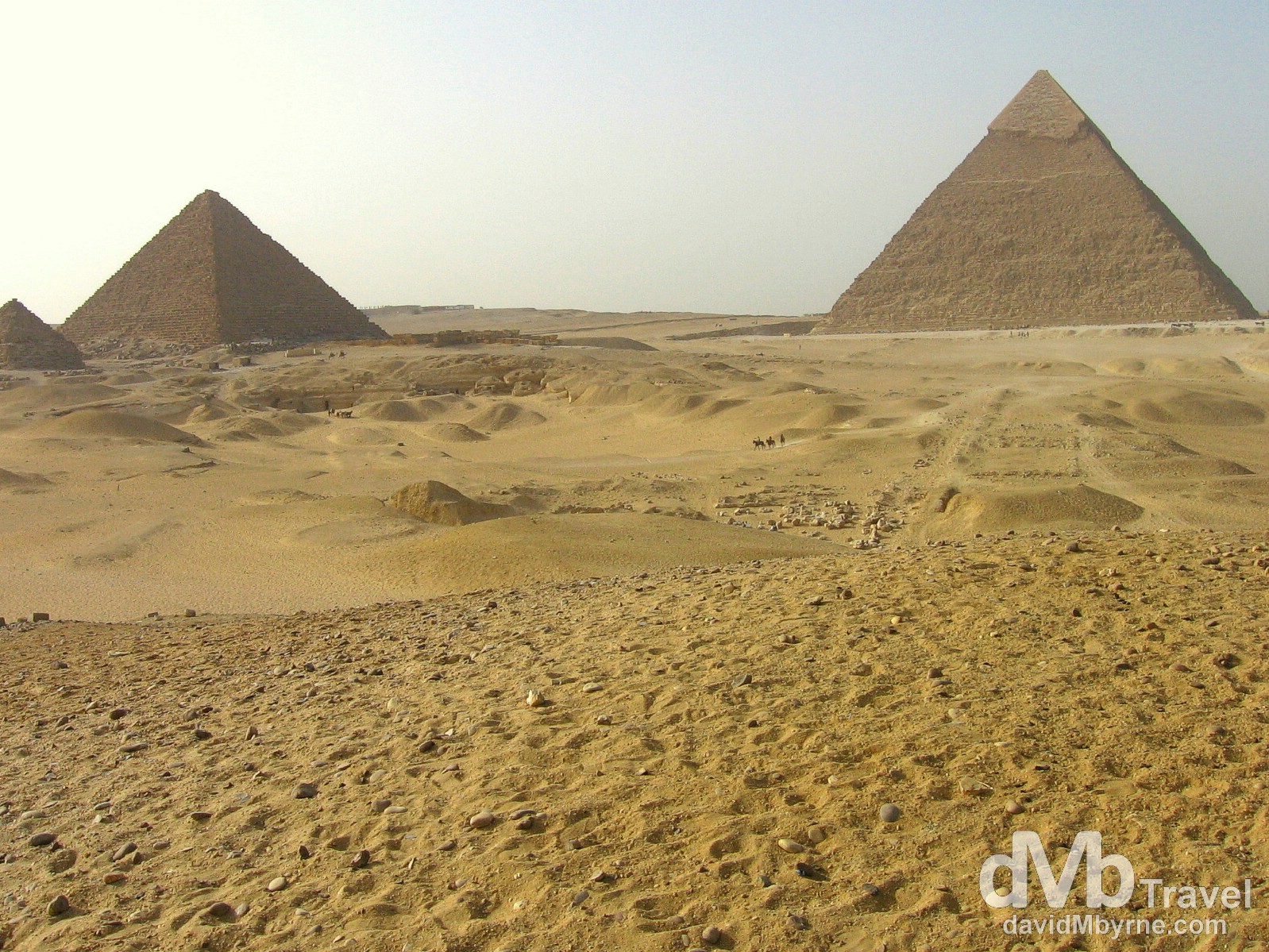 As site plans suggest, the Pyramids’ orientation is no accident. Their entrances are aligned with the Polar Star, or rather its position as it was 4500 years ago; the internal tomb chambers face west, the direction of the Land of the Dead; and the external funerary temples point eastwards towards the rising sun. It is also claimed that the trio of pyramids (the 3rd and smallest pyramid, the Pyramid of Menkaure, is seen to the left of the Pyramid of Khafre in this picture) represents the three stars in Orion’s belt. The entire site is being renovated by the Egyptian Supreme Council for Antiquities and it continues to yield surprises, most notably the recent discovery of a possible secret chamber within the Great Pyramid which some think will contain treasures as stunning as those found in Tutankhamen’s tomb in Luxor’s Valley of the Kings. The Giza Plateau, Egypt. April 13, 2008.

The Giza Trio || The Zenith of Pyramid Architecture
The Pyramid Age began in the 27th century BC but it was the construction of the first of the 3 Giza pyramids, The Great Pyramid of Khufu, in around 2600 BC that marked the zenith of pyramid architecture. After the two other pyramids were constructed at Giza (the Pyramid of Khafre & the Pyramid of Menkaure) fewer resources and less care were devoted to subsequent pyramid fields and thus they never matched the standards of the Giza trio. The 5th century BC Greek historian Herodotus relates that a hundred thousand slaves took a decade to build the causeway and earthen ramps to the Pyramids, and a further twenty years to raise the Great Pyramid of Khufu. However, archaeologists now believe that, far from being slaves, most of the workforce were actually peasants who were paid in food for their three-month stint, while a few thousand skilled craftsmen were employed full-time on its construction. It is estimated that during the most productive century of pyramid-building some 25 million tons of material were quarried. The decline in pyramid building paralleled the decline of the Egyptian Old Kingdom (27th to 22nd centuries BC) and by the time of the New Kingdom (16th to 11th centuries BC) its rulers, remembering the plundered pyramids, opted for hidden tombs in the Valley of the Kings in Luxor. 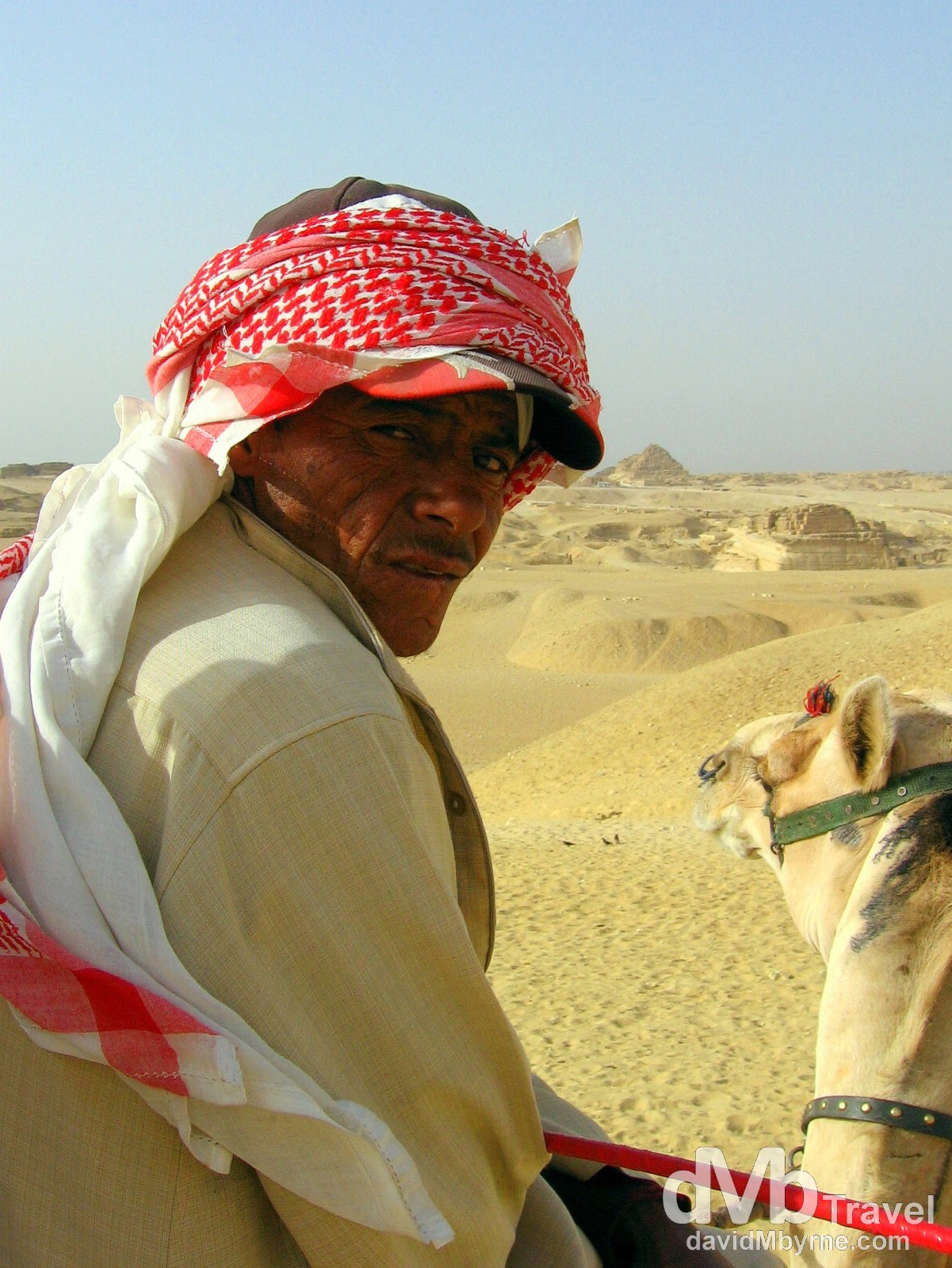 My Bedouin camel herder as we cross a section of the Giza Plateau en route to The Sphinx. The Giza Plateau, Giza, Egypt. April 13, 2008.

From the summit of these monuments, forty centuries look upon you.

A picture of The Sphinx with the Great Pyramid of Khufu in the background. This legendary monument is carved from an outcrop of soft limestone that was supposedly left standing after the harder surrounding stone was quarried for the Great Pyramid. Conventional archaeology credits Khafre, he of the Pyramid of Khafre, with the idea of shaping it into a figure with a lion’s body and a human head complete with the royal headdress of Egypt. The name Sphinx was actually bestowed by the Ancient Greeks after the legendary creature that put riddles to passers-by and slew those who answered wrongly. The Arabs called it Abu el-Hol (the Awesome or terrible one). Used for target practice by Napoleonic troops, the Sphinx lost much of its beard to the British Museum and was sandbagged for protection during World War II. Early modern repairs did more harm than good and a more recent long-term restoration project (1989-98) involved hand-cutting ten thousand limestone blocks to refit the paws, legs and haunches of the beast; the missing nose and beard have not been replaced, deliberately. Three tunnels exist inside the Sphinx, one behind its head, one in its tail and one in its north side. Their function is unknown but none of them go anywhere. Other tunnels have been unearthed in the vicinity of the Sphinx. Again, no one knows who built them or what they were for but one suggestion is that they were created by later ancient Egyptians looking for buried treasure. Like everything else regarding the Giza Plateau, mysteries abound. The Giza Plateau, Giza, Egypt. April 13, 2008.