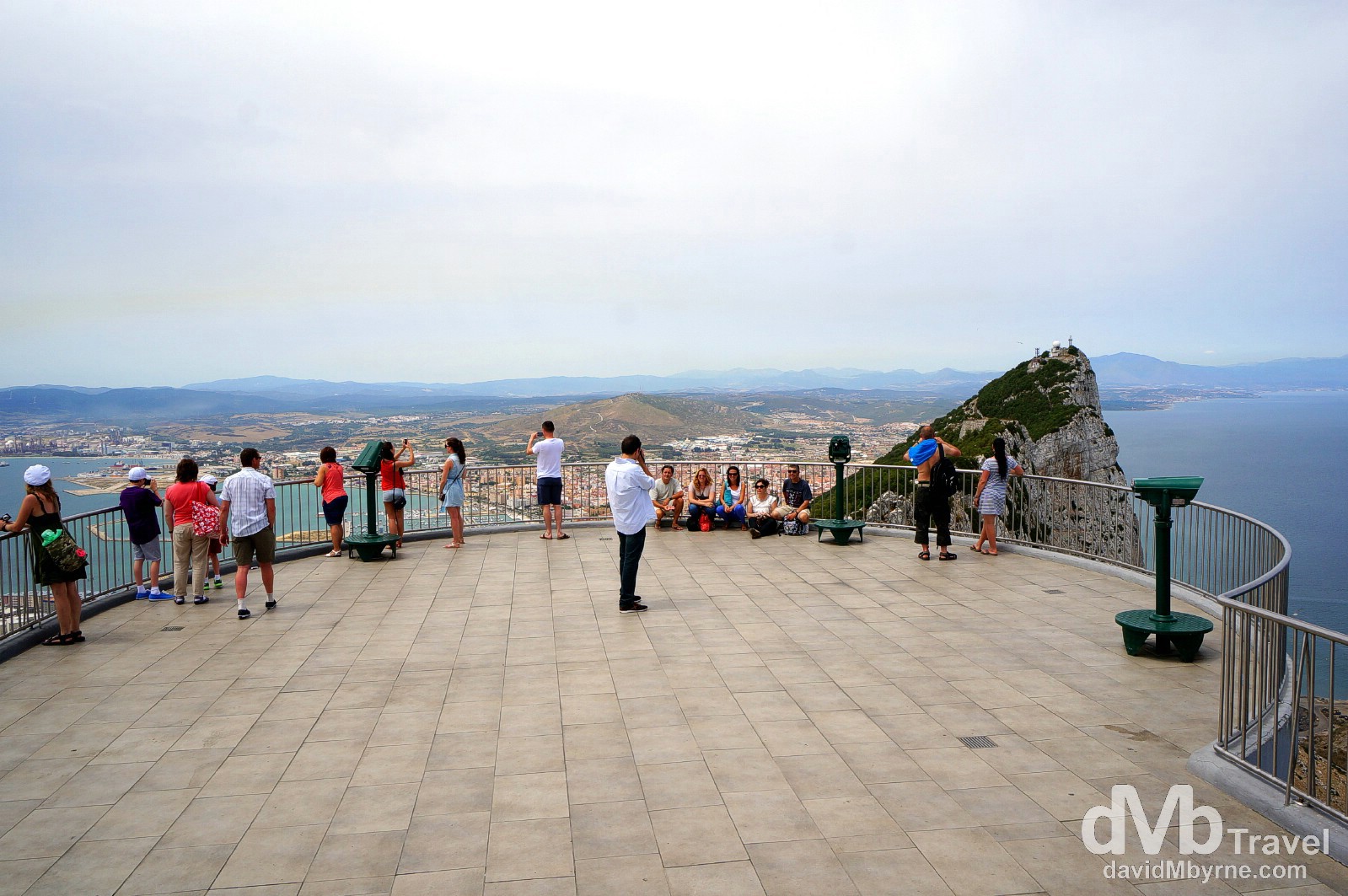 I ’m just back in the little southern Spanish port town of Algeciras having spent the day feeling like I was in England. Actually, I was. Kind of. 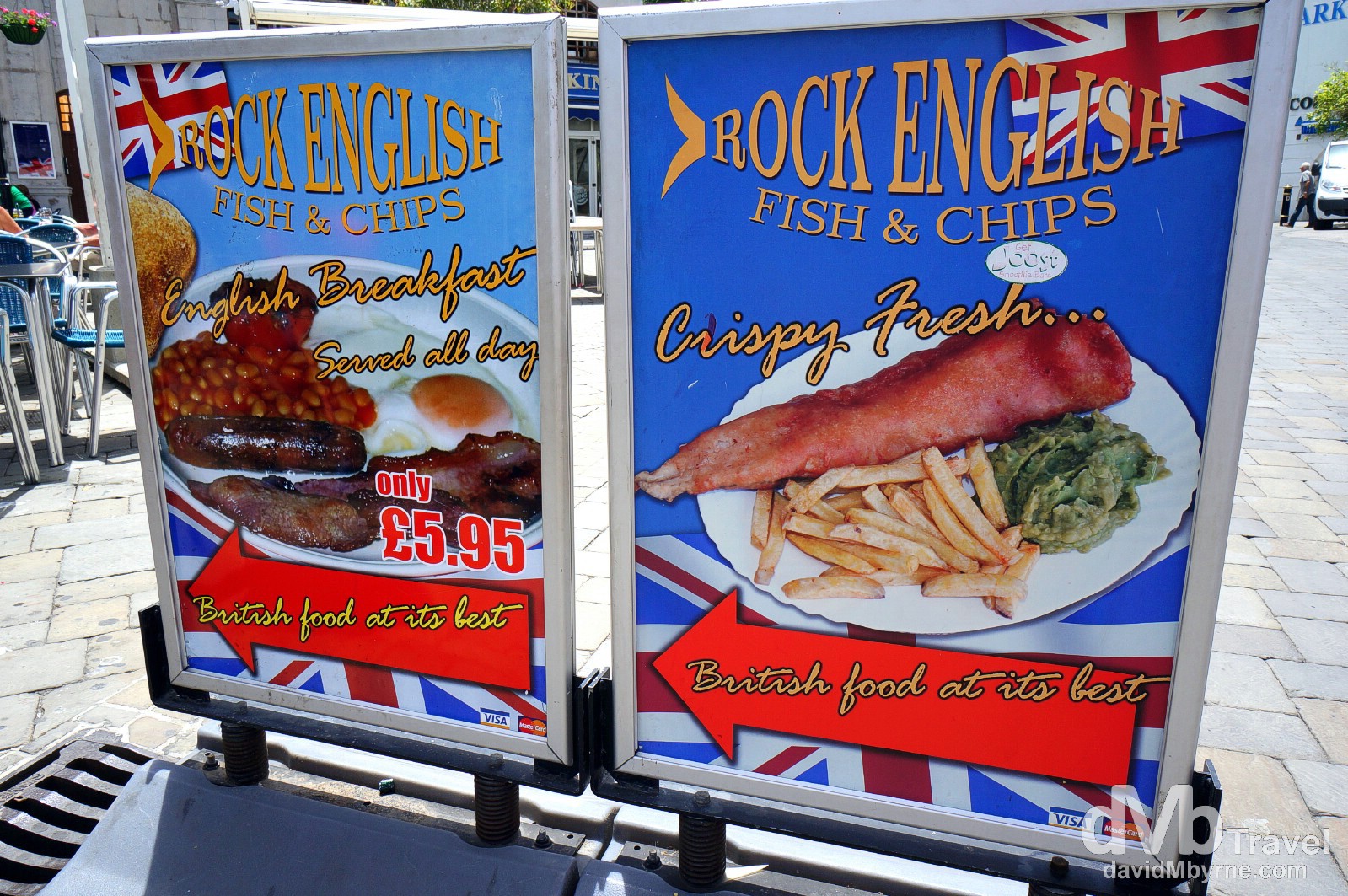 Gibraltar || England With Sunshine
Union Jacks, Bobbies on the beat, red telephone boxes, fish & chips, black litter/rubbish bins, & The Lord Nelson pub, among other very British named boozers. You’ll find them all, and more, in Gibraltar, the tiny British Overseas Territory/colony geographically attached to southern Spain off the southwestern tip of Europe but located almost 1,500 miles from London. This place has been a British Overseas Territory since 1713 when it was ceded to Britain in perpetuity by something called the Treaty of Utrecht after they – the Brits – had initially captured it from Spain in 1704 as part of a joint Anglo-Dutch effort. The territory’s population is estimated to be around 30,000, the majority of whom speak both English & Spanish & live in the densely-populated town of Gibraltar on the less-steep western side of the colony facing the Bay of Gibraltar, across which is my base in the Spanish Andalusian port town of Algeciras. 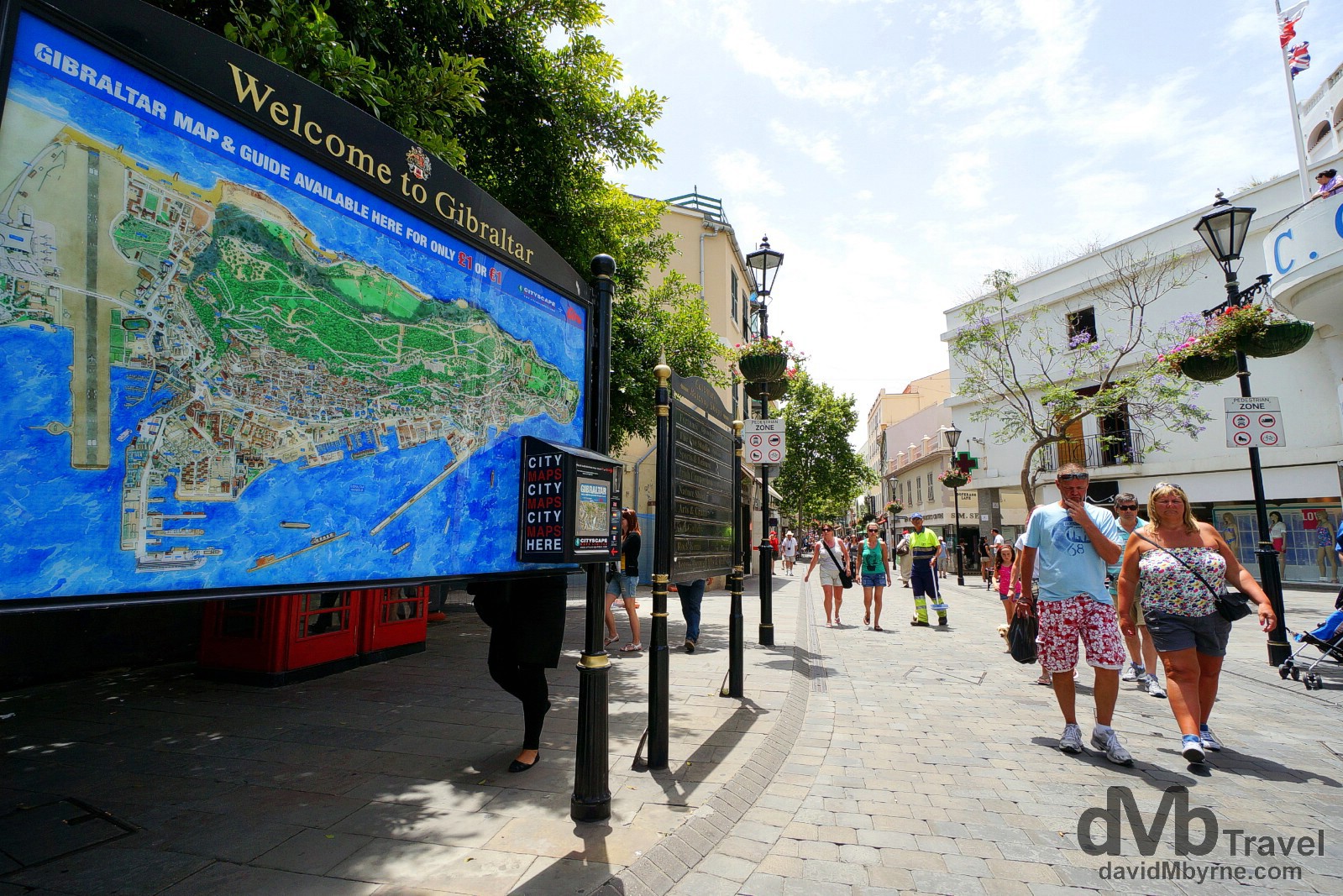 The start of Main Street as seen from Grand Casemates Square, Gibraltar’s main public square. The pedestrianized street, which is over 1 kilometer long, is Gibraltar’s main drag. It’s a typically British affair where you’ll find the British high street stalwarts of Marks & Spencer, Next & NatWest. The Gibraltar Pound, which is tied to the Pound Sterling, is the official currency but all shops and businesses accept the Euro – prices are typically displayed in both currencies & even petrol pumps show two sets of digits to accommodate both currencies. Gibraltar. June 5th, 2014

Visiting Gibraltar is a truly unique, somewhat bizarre experience, & it starts with the approach to the colony which sees you walk (or drive) across an international airport runway. Honest. 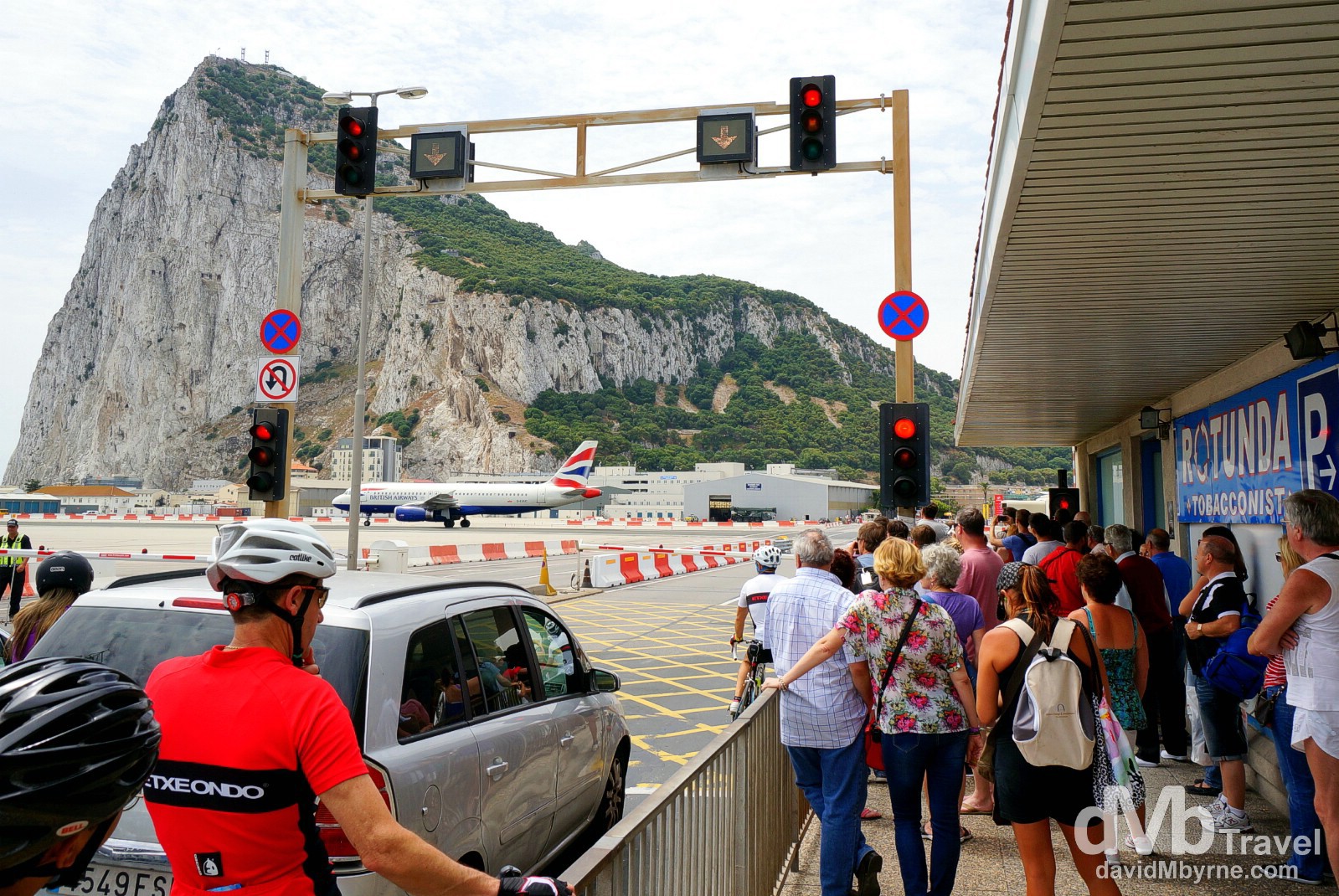 Here I find myself, along with a few others, waiting for a recently landed BA flight to taxi to a gate before continuing on my merry way towards Gibraltar – the famous north face of the equally famous Rock of Gibraltar can be seen in this picture. The colony is connected to the Spanish mainland town of La Linea by only one road, the aptly named Winston Churchill Avenue. It crosses the runway of Gibraltar’s International Airport so when a plane is taking off or landing those wanting to enter or exit Gibraltar must wait. Granted the airport isn’t a terribly busy one but still, delays to pedestrians and motorists are not unheard off, as are border closures themselves in times of fraught Anglo-Spanish relations – Spain still asserts a claim to the territory. Gibraltar International Airport, Gibraltar. June 5th, 2014

No dilly-dallying now. The sign at either side of the pedestrian crossing on the runway of the International Airport in Gibraltar. June 5th, 2014 (iPod)

The Rock & The Upper Rock Nature Reserve
Gibraltar’s most famous (& only) landmark is, of course, The Rock of Gibraltar itself, a.k.a The Rock. It’s one of the two so-called Pillars of Hercules, the phrase that was applied in Antiquity to the promontories that flank the entrance to the Strait of Gibraltar separating Europe & north Africa. Needless to say The Rock dominates the area – it’s clearly visible from all around & it is even visible from the coast of Morocco across the Strait of Gibraltar. It’s a massive 6 km² lump of deeply eroded Jurassic limestone that rises to a height of 426 metres with sheer cliff faces on its northern & eastern sides. Most of the upper rock is part of the Upper Rock Nature Reserve, Gibraltar’s grand tourist draw offering walks and views in equal measure.

#Gibraltar from the top of its famous rock #travel #travelphotography #dmbtravel pic.twitter.com/JoEajd7kUC 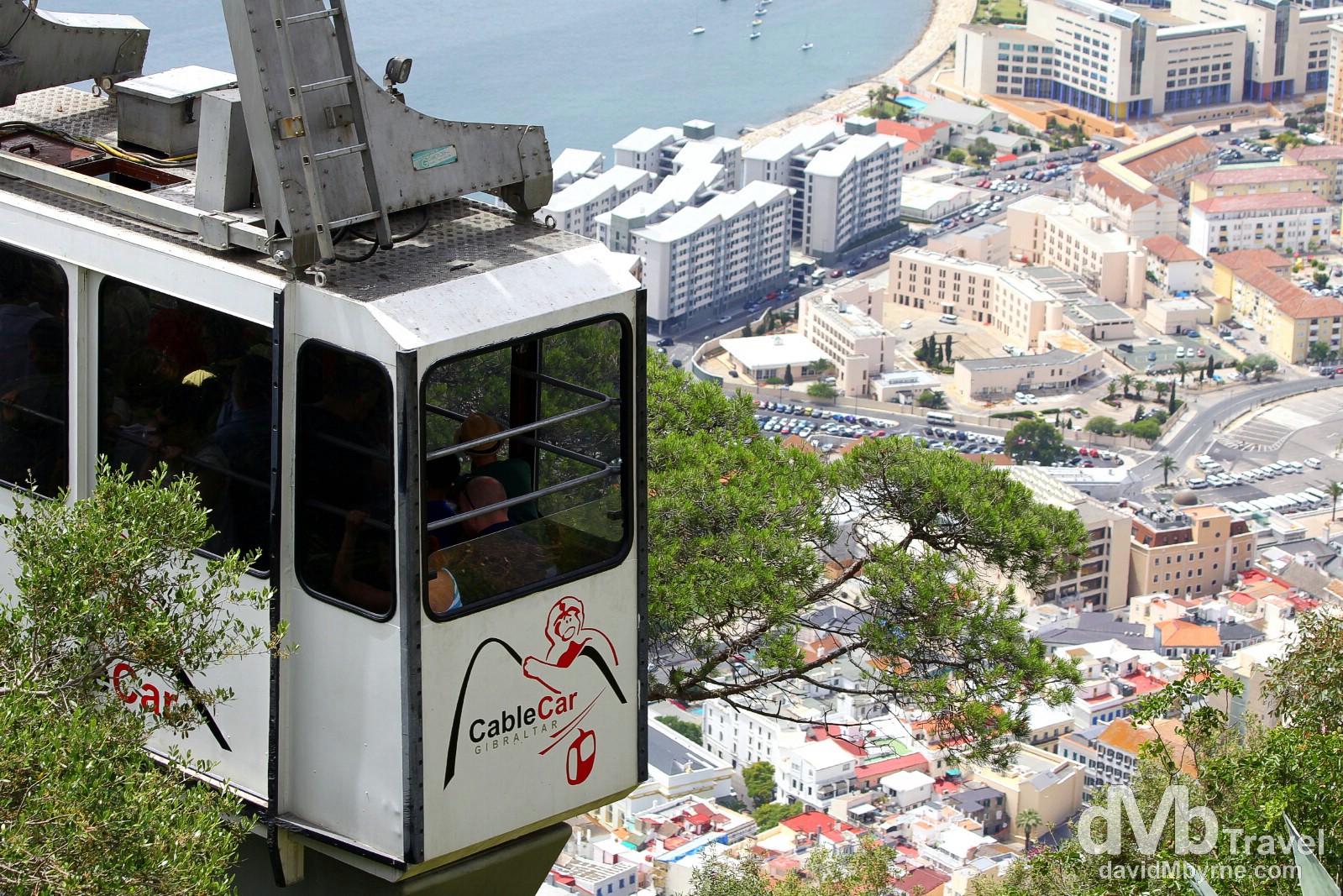 You could walk up to the At The Top viewing platform from street level but it’s e a long slog. Best just do as I did – get the (pricey) cable car up & walk back down. The Cable Car leaving the top station of The Upper Rock Nature Reserve in Gibraltar. June 5th, 2014 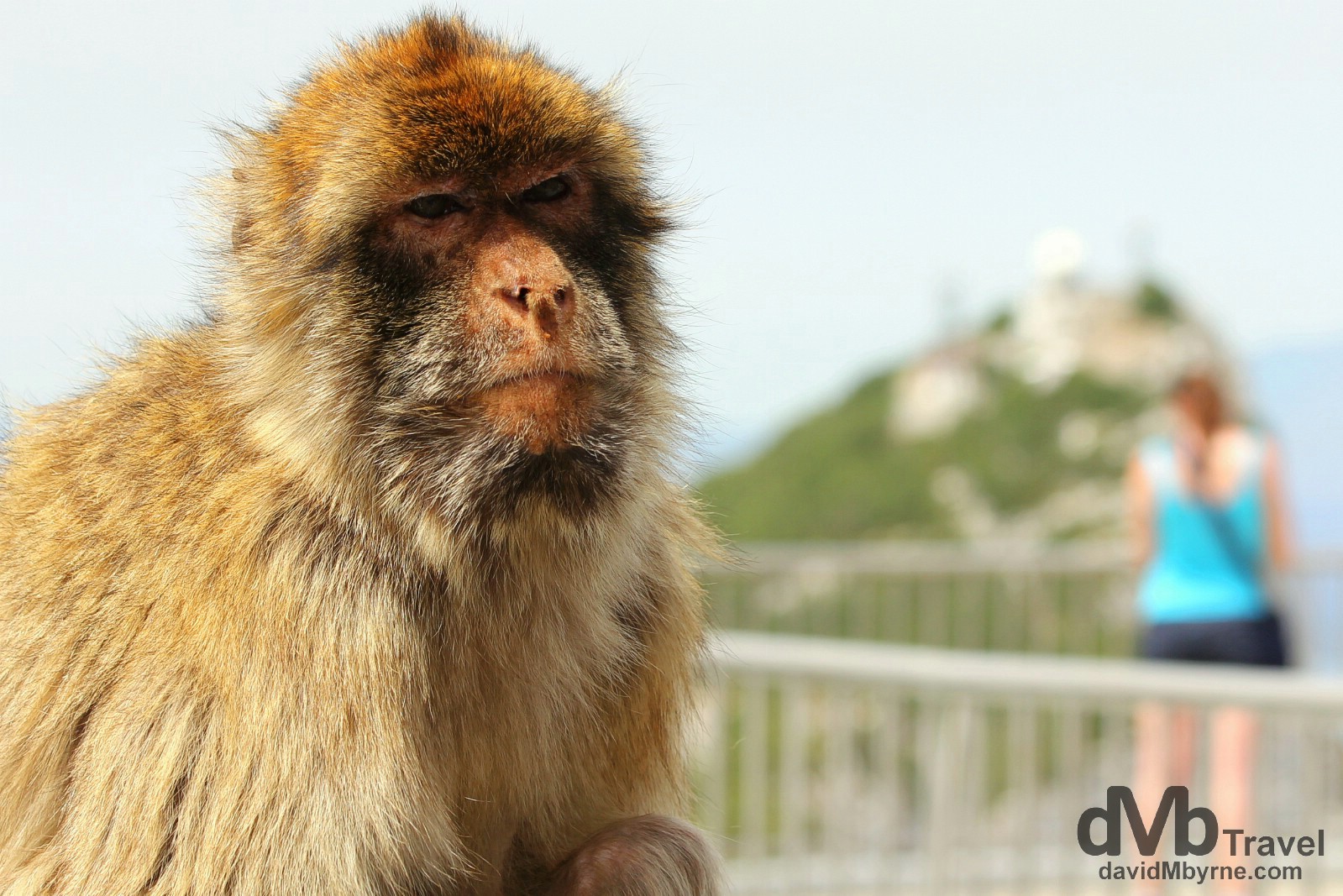 A resident Macaque monkey at The Top of The Rock viewing deck. Gibraltar’s Upper Rock Nature Reserve is home to over 200 of these somewhat aggressive bag snatchers, probably the biggest attraction on The Rock (even more so than the views). Signs abound requesting not to feed these primates but people obviously can’t read (or help themselves). At The Top viewing deck of The Upper Rock Nature Reserve, Gibraltar. June 5th, 2014

The highlight of the The Upper Rock Nature Reserve, & Gibraltar, for me was visiting & learning about The Great Siege Tunnels, tunnels in The Rock that were initially hand-hewn by British forces for gun emplacements during the famous 1779-1783 siege of Gibraltar when the Spanish tried unsuccessfully to win back the territory from the besieged British – Gibraltar’s location & highly defensible nature means it has been highly coveted for centuries & today the Rocks upper reaches bristles with fortifications, gates and gun emplacements. These tunnels, an exercise in patience if ever there was one, were started in 1782, initially as a way of getting cannon onto a large natural protection on the northern cliff face known as ‘The Notch’, an area attacking forces could & did use to shelter themselves from defensive bombardment. The tunnels were extended over the years, most notably during World War II, and today the total tunnel network inside the Rock measures 48 kilometres most of which is still operated by the military and only a very small portion of which is open to the public. 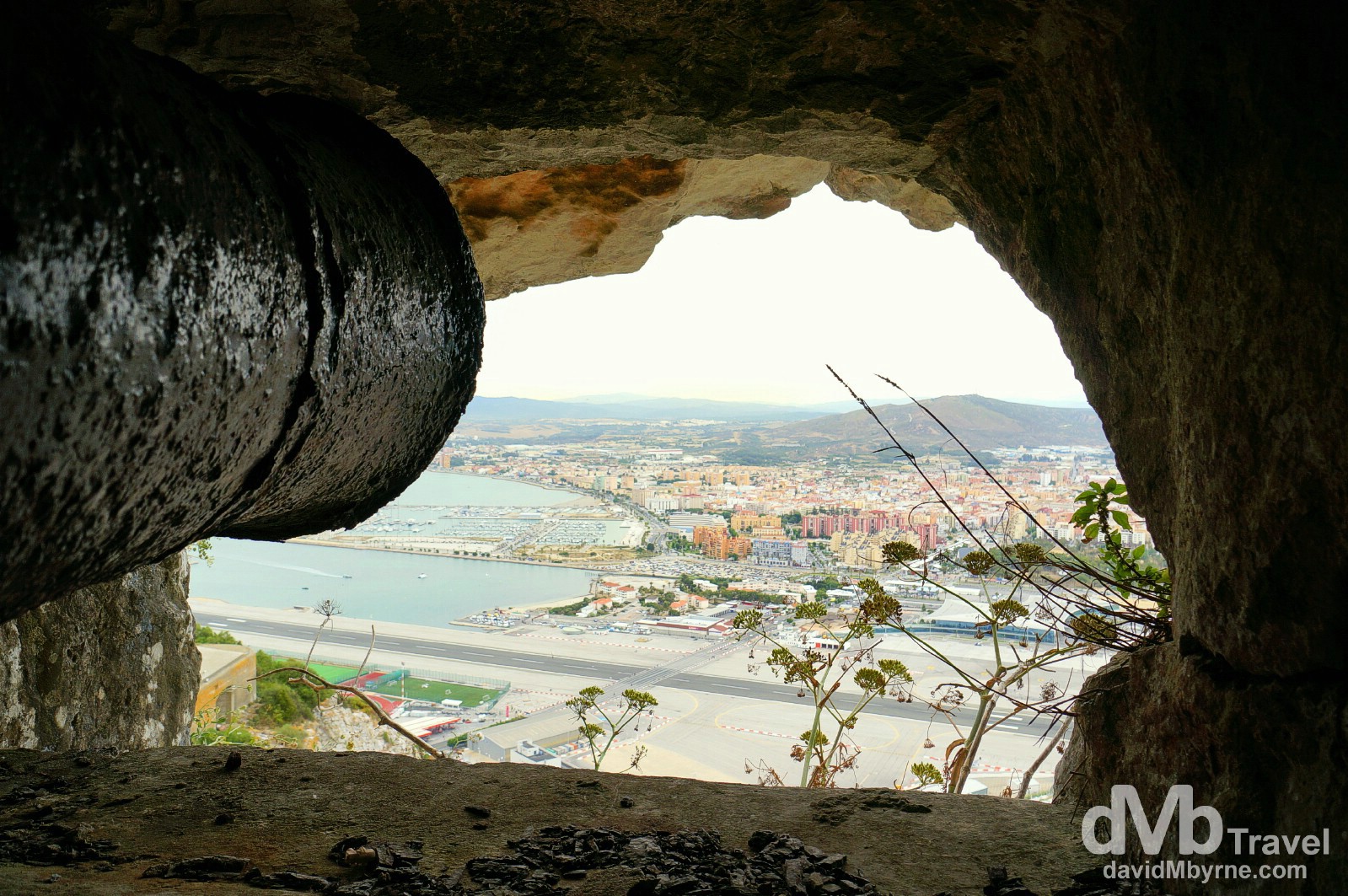 This is a picture of the barrel of an early 1870s cannon looking out one of the tunnel embrasures (an opening for firing through) in a section of the almost-vertical north face of the Rock. This is one of only six embrasures that was completed by the time the Great Siege ended in February 1783, at which stage only 113 metres/370 feet of tunneling had been completed. Today it – the cannon – looks out over the runway of Gibraltar International Airport, an area of land that back in the days of the siege was a racecourse (so says one of the many informative displays found in the tunnels). The Great Seige Tunnels in The Upper Rock Nature Reserve, Gibraltar. June 5th, 2014