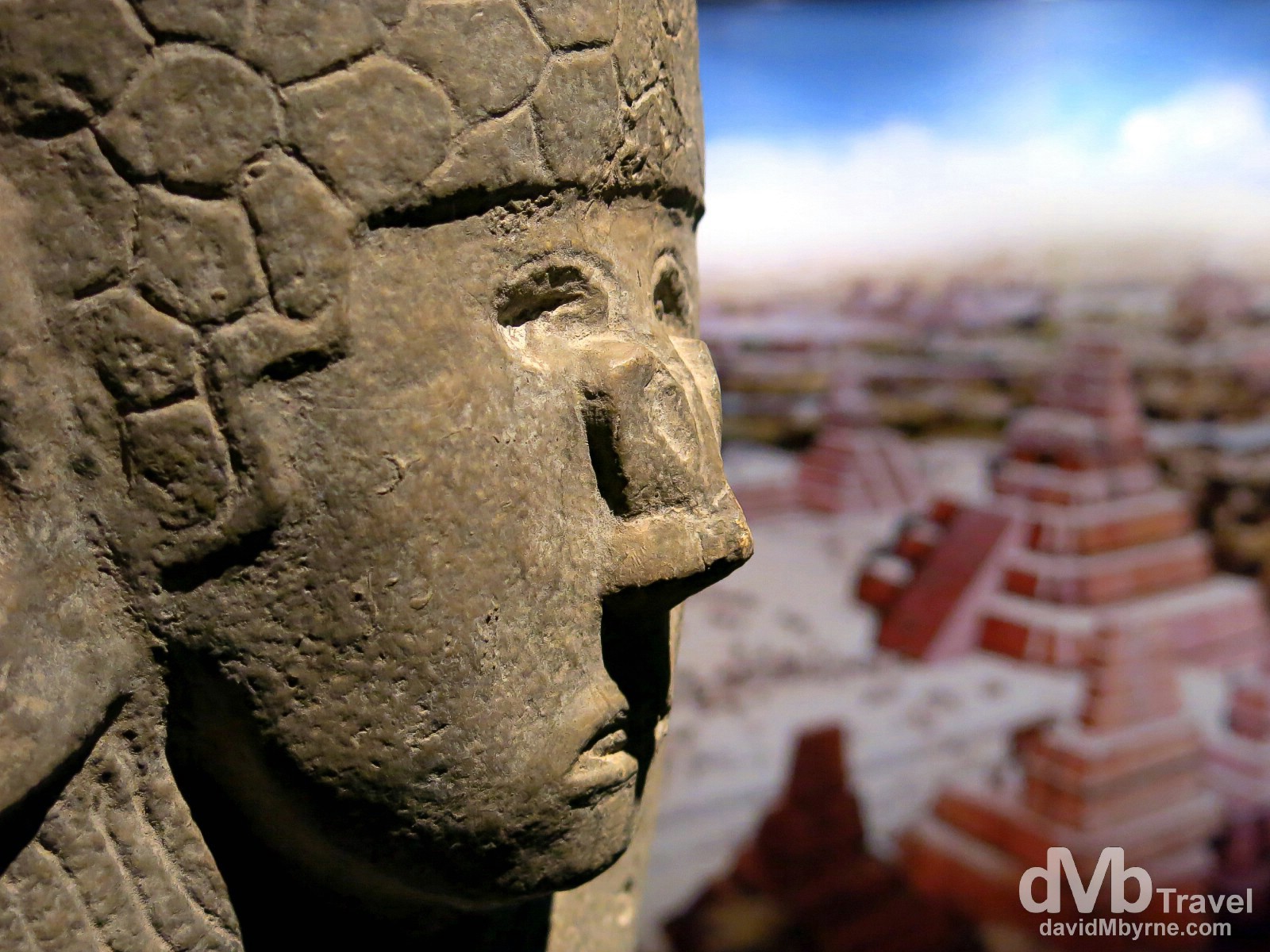 It’s 6 p.m. on my last evening in Mexico. I’m just about ready for tomorrow’s departure to Belize, & thus Central America, just a few kilometres from here. Tonight will be my second night in Chetumal, the capital of Quintana Roo on Mexico’s Yucatán Peninsula. Located on the Bay of Chetumal, a sheltered inlet of the Caribbean Sea at the mouth of the Rio Hondo, The city is trying hard to promote itself as more than just the obvious – a gateway between Mexico & Central America. As border towns go Chetumal isn’t all that bad, but there’s no denying that there’s not a whole lot to do or see here. So it – the promotion of the city as a tourist destination – is a tough sell, one that would be made all the more difficult were it not for the city’s awesome Mayan Cultural Museum for which I set aside a few (fascinating) hours earlier today.

The Museo de la Cultra Maya (Mayan Cultural Museum) is split into three levels, levels that mirror the Mayan cosmovision: The Heavens (upper level); The Earth (middle level); and The Underworld (lower level). The awesome museum is a real find, a bold showpiece that is wonderfully conceived & beautifully executed. No Mayan stone is left unturned and one truly gets an appreciation for the Mayan way of life and their ingenuity. It’s well worth a visit. Museo de la Cultra Maya (Mayan Cultural Museum), Chetumal (

Oh! Let us grieve for they have arrived! From the east they came, the bearded men, the strangers from the land, the blond men arrived in these lands.

I’m sure Mexico hasn’t gone out of its way to impress me. But it has. Rarely has a first-time destination resonated with me as much as Mexico has. And now, on the eve of my departure from the country, if I were to choose one word to sum up my time here it would be easy. I could list more, many more, all of which would in some way broadly generalise travel in the country, and all in an overly positive way. Don’t get me wrong, I like to complain – maybe more than is good for me – but of my time in Mexico I really have nothing to complain about (nope, I’m not even going to mention the stifling Yucatan heat, not even once).

Sights? They just kept coming. Mexico is a huge place (I’ve only barely scratched the surface) and what to do and see here can be somewhat overwhelming, but overwhelming in a good way. History & Architecture? Fascinating, both. Yes all those pre-Columbian (meaning before the arrival of the Europeans, notably the Spanish in 1517) ruins or Spanish-era colonial architecture can, if being honest, get a bit repetitive, but still they never fail to impress. Transport & getting around? Fast, comfortable & cheap. Accommodation? Suffice to say a lot more than I expected for €7-10 a night. The people? Easygoing & friendly. The language? Oh yes, I’ve dug up my teenage-years Spanish and it’s getting me by, & getting better. Food? Mexican food, real Mexican food, at Mexican prices. Enough said. Beer? Corona for €1.50 (although I’m not fussy & will take a Sol just as easily, whichever is cooler – ‘Frio, por favor.’). Mexican days have flow by & now they are at an end. That saddens me. But I’ll be back. Of that there is no doubt.