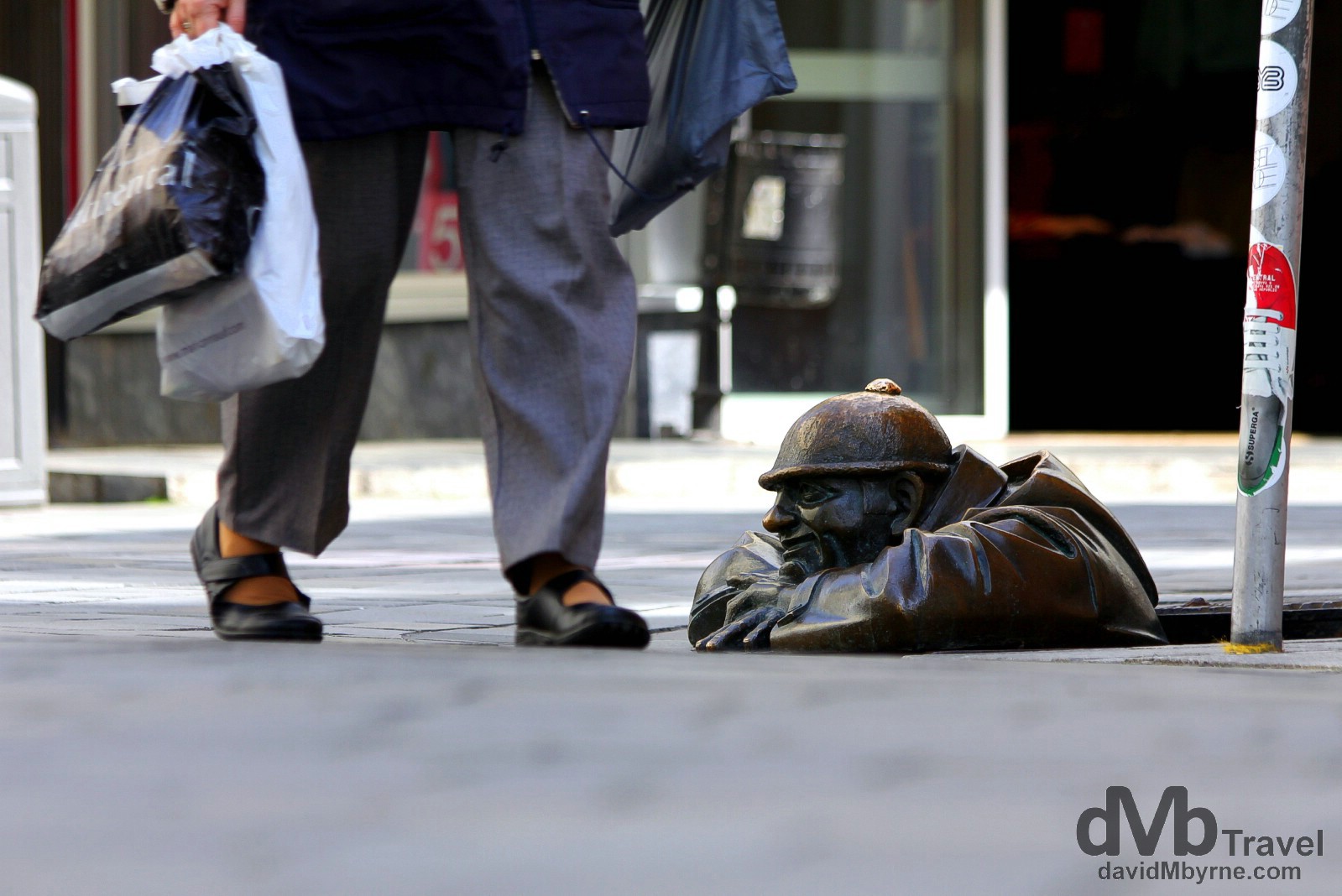 One of Europe’s newest capitals yet an ancient and important city to the Austro-Hungarian empire, Slovakia’s Bratislava is a curious place. A city of blended cultures & one offering up a strange mix of old & new, it’s a city where you can peer at 20th century communist monstrosities from the walls of an age-old castle; a city with a pedestrian centre of cobbled streets, plazas, countless cafes & bars, & pastel 18th-century rococo buildings all surrounded by a sprawl of industrial blight & ugly architecture covered in graffiti. It’s hard to know what to make of the place really. All I know is I liked it. 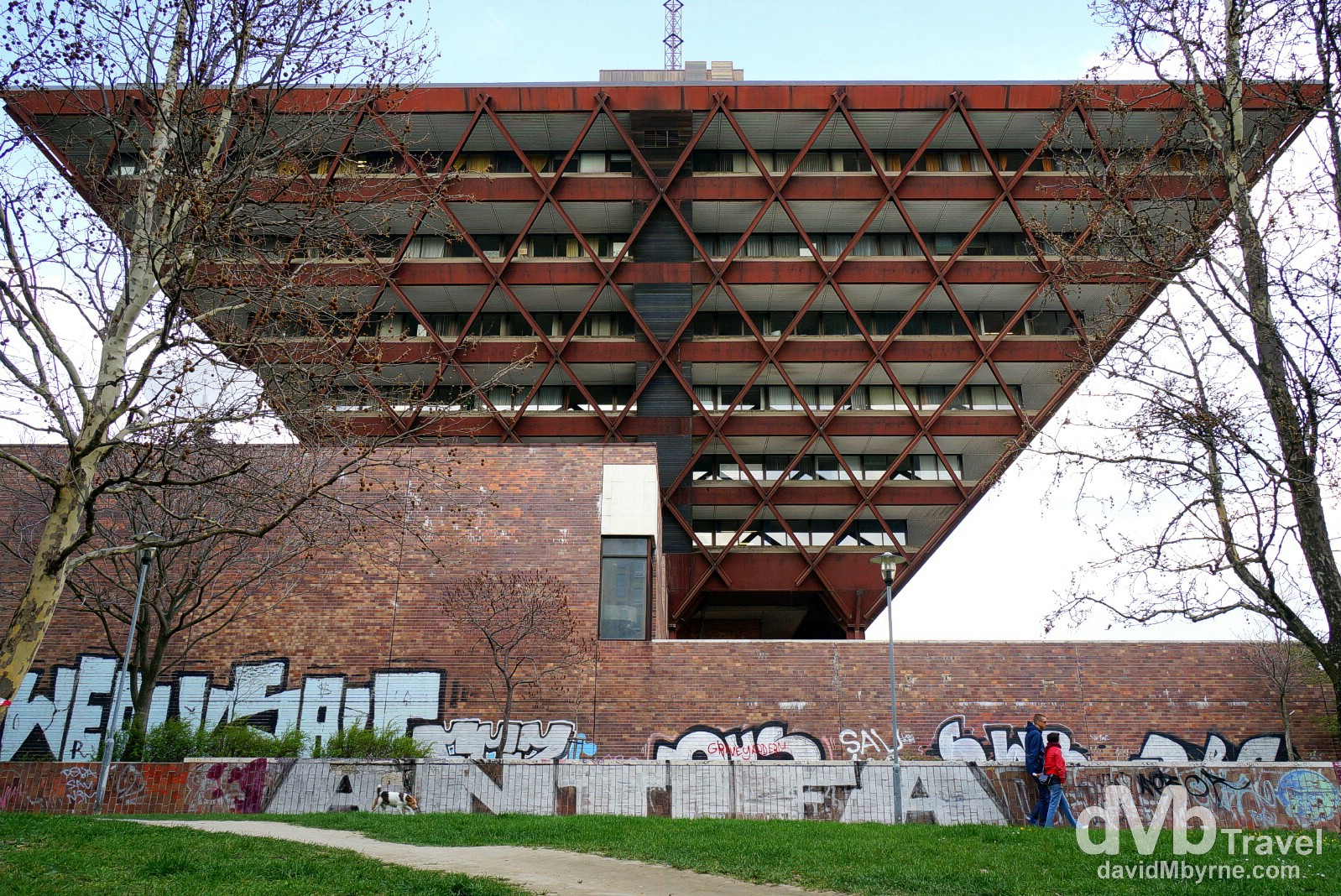 Bratislava’s communist monstrosities, and there are a few, don’t come much more monstrous than this, the Slovensky Rozhlas (Slovak Radio Broadcast). Someone at some stage obviously thought it a good idea to build the upside-down pyramid-like structure, one that was once listed at number 12 on the list of the world’s ugliest buildings. It looked derelict to me but seemingly it’s used for concerts and the like. It’s a big monstrosity & even with a wide-angle lens I had to stand well back to get this shot. Bratislava (

The toilet in Taste Cafe/Restaurant in the UFO on the SNP Bridge, Bratislava, Slovakia. You pee into a… http://t.co/BOTGYpBk4p 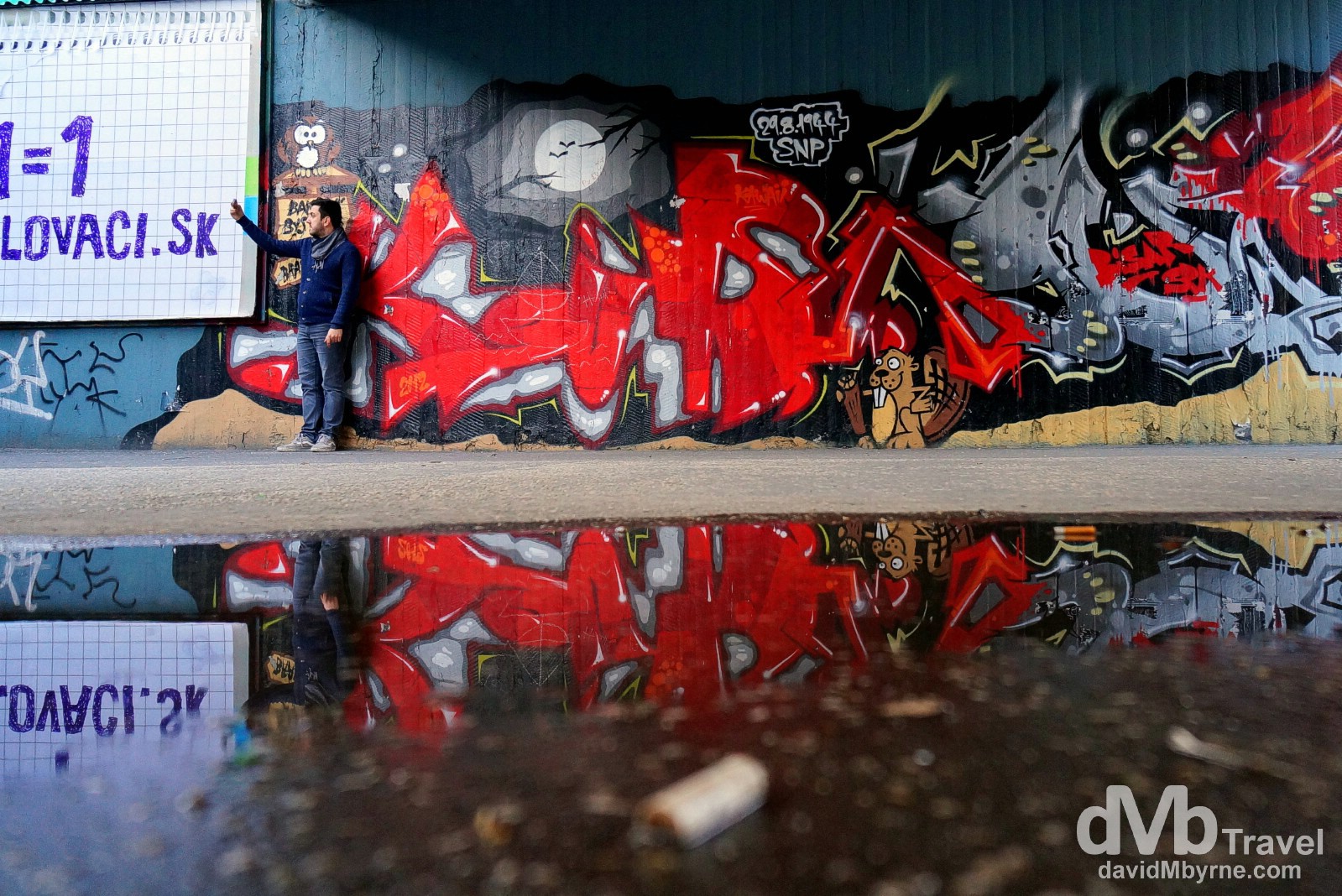 A selfie with the graffiti of Novy/SNP most (bridge). Graffiti blights Bratislava, as it does all ex-communist Central or Eastern European countries I’ve visited – it, ugly buildings & trams are the communist stalwarts. Graffiti is rampant in the city but seemingly the walls under the Novy/SNP most are something of an organised open-air graffiti gallery with the walls redecorated every year. Bratislava, Slovakia. March 27th, 2014 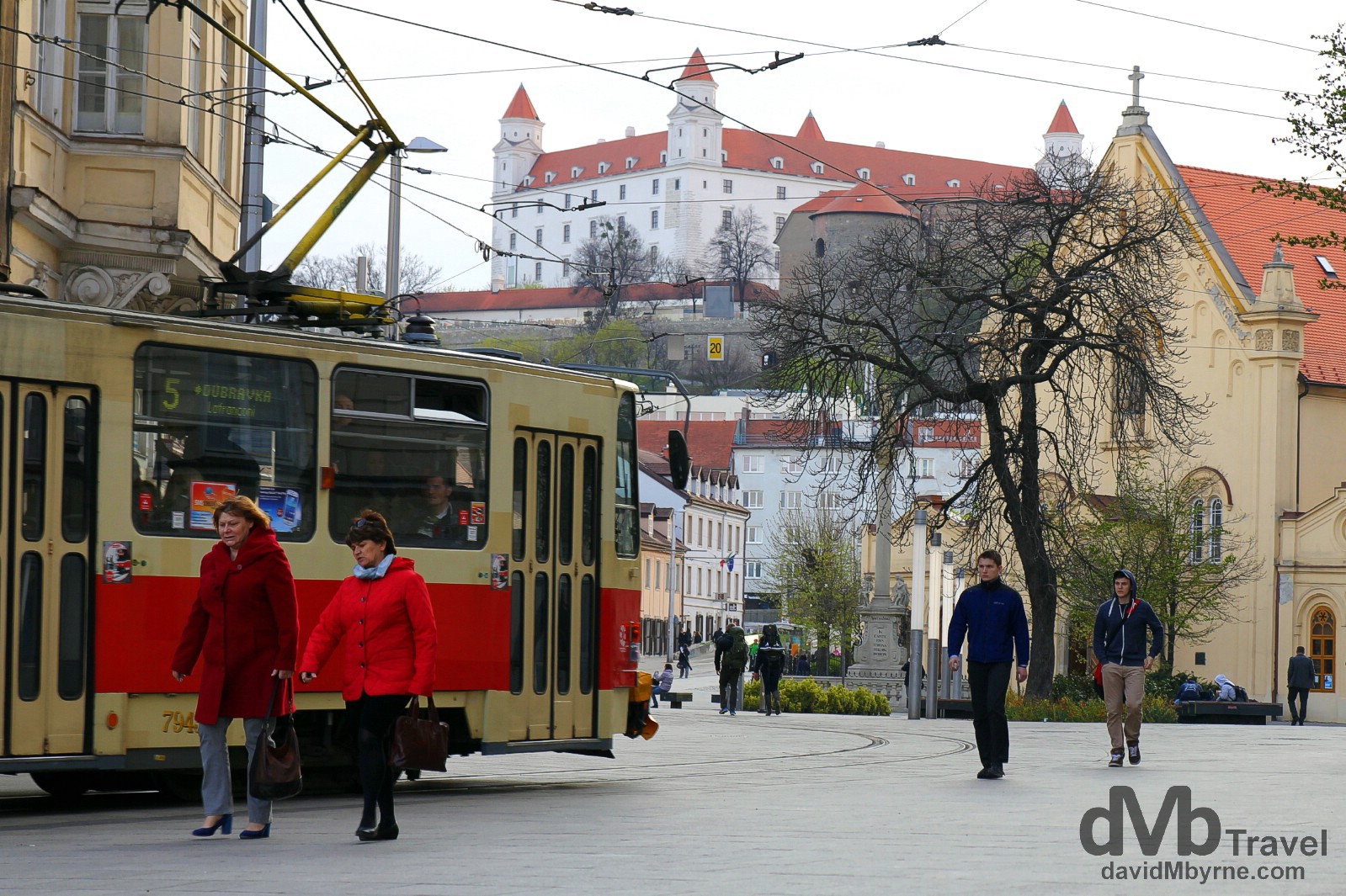 Bratislava’s electric tram network opened in 1895 making it one of the oldest in Europe. In the background is the upside-down table-esque Bratislava Castle which lords over the city. First mention of the castle was in the year 907. It was seized & rebuilt many times over the years & last burnt to the ground in 1811. It was only restored to its present form in 1953. Bratislava, Slovakia. March 27th, 2014 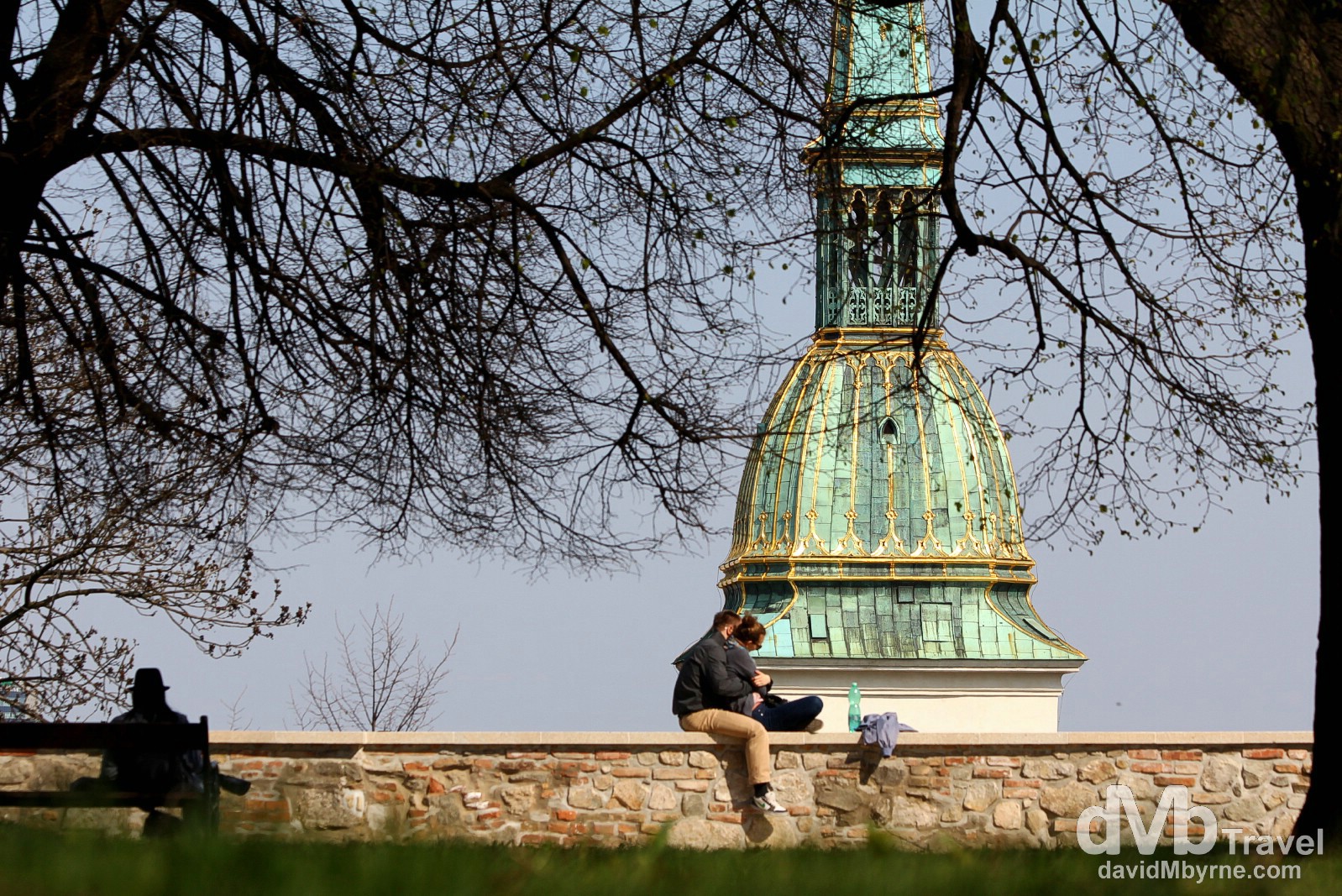 I paid a visit to the aforementioned Bratislava Castle castle, mainly for the views back over the city. But, & as is regularly the case, people enjoying the views from the walls in the castle grounds proved to be more photogenic than the views themselves. The spire seen here is that of Dom Sv. Martina (St. Martin’s Cathedral), the city’s most important church. Bratislava, Slovakia. March 28th, 2014

Not the strange communist creations. Not even the castle. Nope, the most photo-opted sight in Bratislava is this bronze statue called The Watcher, a sculpture of man – under a Men At Work sign – peering out of an imaginary manhole. And he’s not alone. Other characters – The Frenchman & The Photographer are two that immediately spring to mind – dot the city centre too, adding to the curiousness of Bratislava. Bratislava, Slovakia. March 28th, 2014