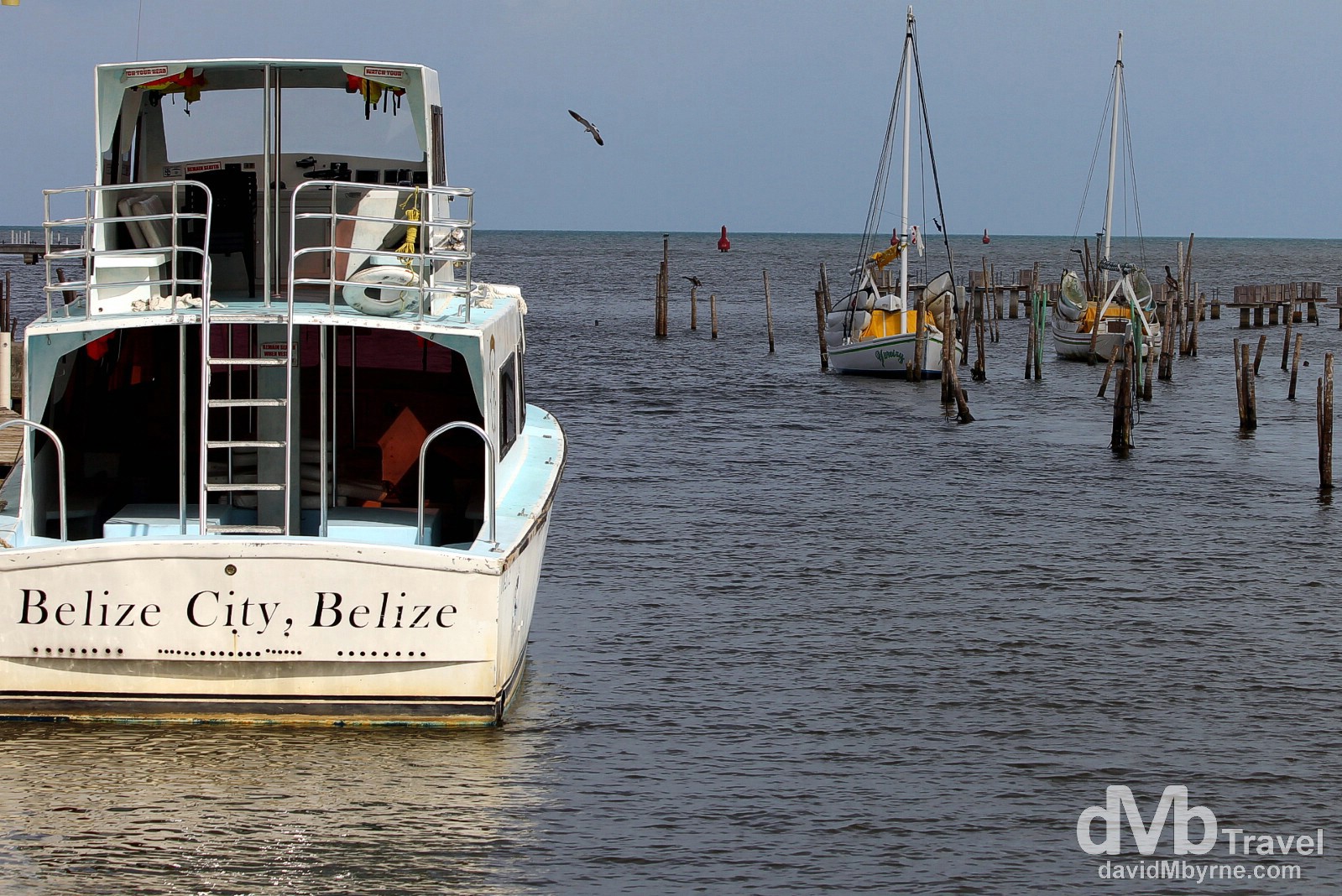 I took a look around Belize City this afternoon, the biggest city in Belize but not the capital – that’s a place called Belmopan (reads like a dangerous chemical). Even though it’s the biggest city Belize has to offer, & even meandering as slowly as I did, looking around didn’t take long. An hour, tops (it’s a small place). And trust me to choose a Sunday to see what the city has to offer, the day it shuts down – the streets were virtually empty today save for destitute loungers & street corner drunks who, I’d image, are here regardless of what day of the weeks it is. It’s hard to explain this city & getting more familiar with it does nothing but add to the strangeness of this country as a whole.

(About) As picturesque as Belize City gets, I’m afraid. Boats in Haulover Creek, Belize City ( 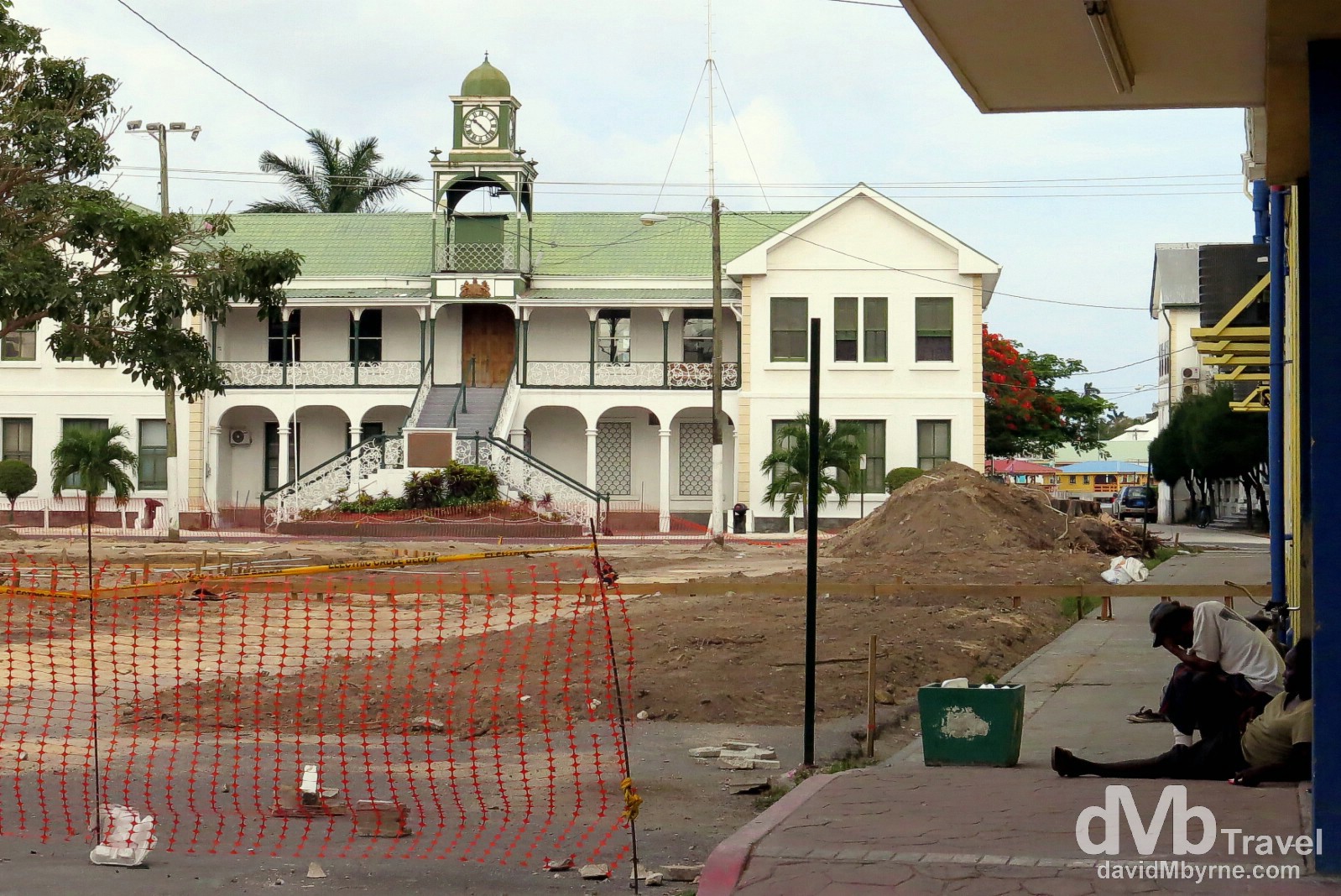 The 1926 Belize City Court House fronting Battlefield Park. The city isn’t looking its best these days; a lot of its streets are dug up & are in the midst of getting, I assume, a (much-needed) makeover. Battlefield Park is, according to Lonely Planet, ‘always busy with vendors, loungers, con artists and other slice-of-life segments of city society.’ Well maybe, but not on a Sunday & certainly not when it’s in the condition I found it today. Belize City, Belize. May 12th 2013.

A lot of the city could do with a lick of paint. A few licks of paint even. 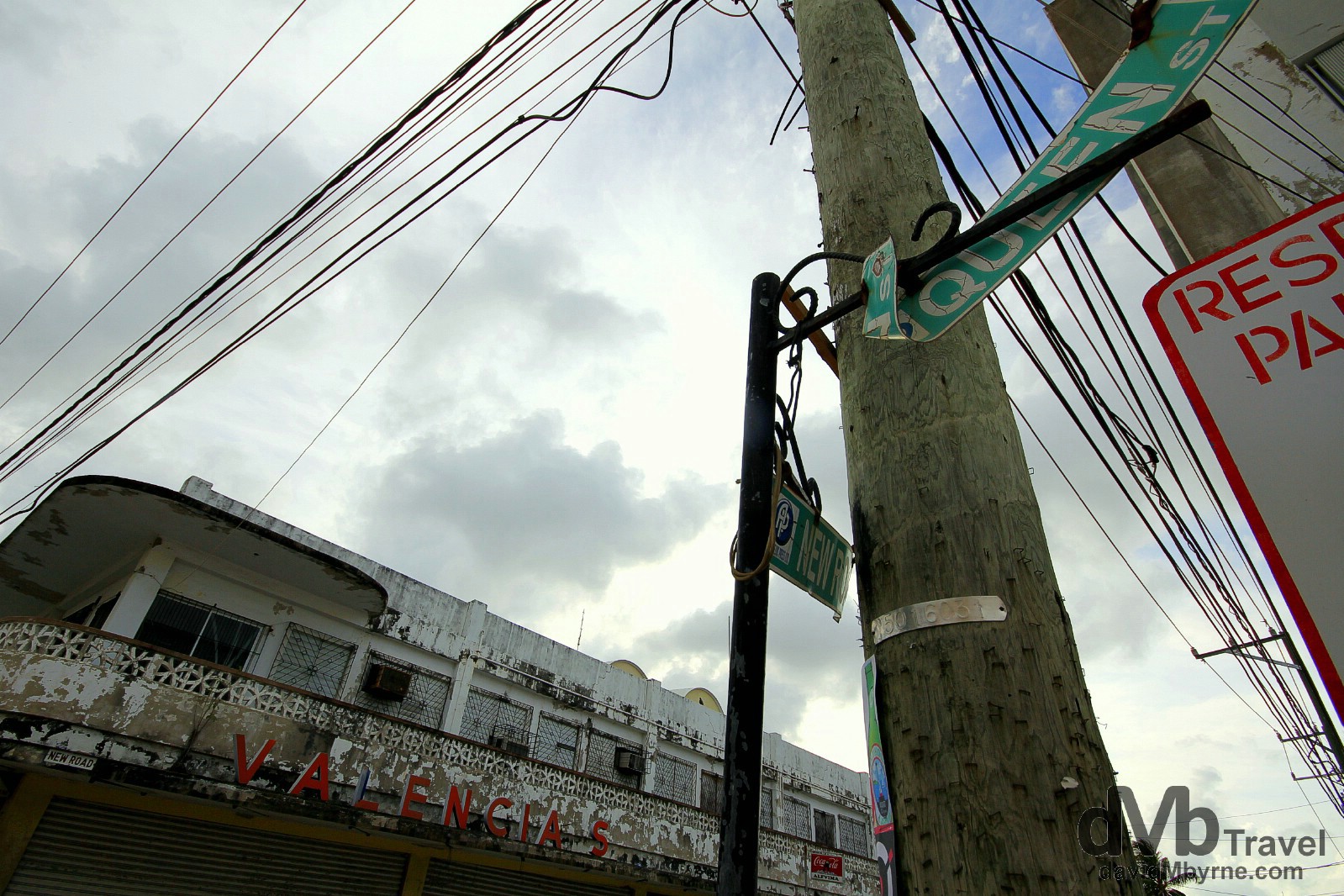 Remnants of past hurricane damage at the corner of Queen Street & New Road, Belize City, Belize. May 12th 2013.

And a lot of the city’s buildings could do with a bit of upkeep. A lot of upkeep. 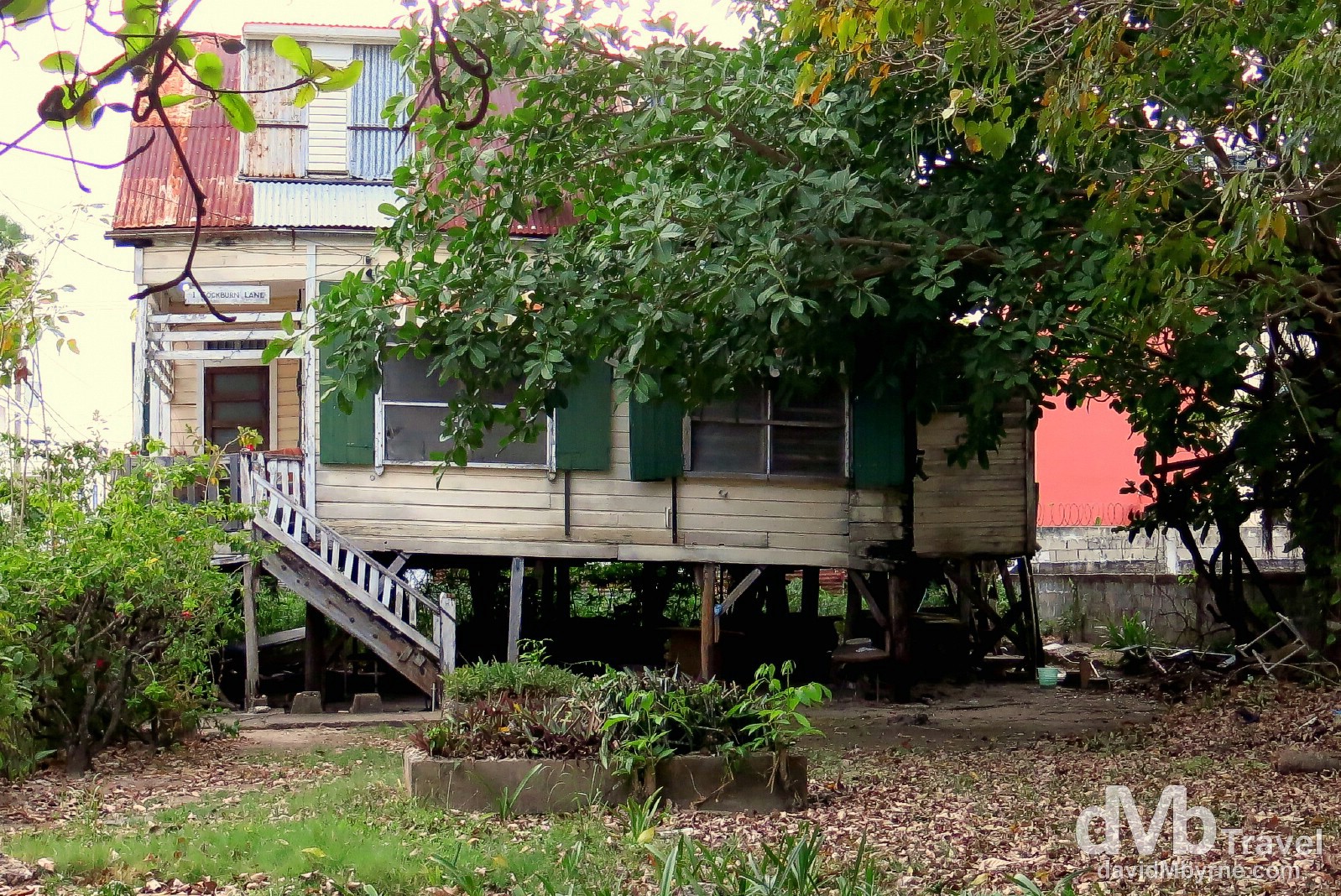 Belize City’s architecture seems limited to bland concrete-block style buildings or old, dilapidated wooden houses (although on the eerily quiet residential streets of the capital there are a lot more wooden structures than concrete ones). Many of the latter have fallen victim to hurricanes over the years, but some, however unlikely it seems, still hang in there. Regent Street, Belize City, Belize. May 12th 2013.

Caye Caulker
Tonight is my second night in Belize City. Some might say that that’s a night too many here. Others might even say that two nights is two nights too many. I’d understand both those viewpoints. Regardless, I’ll be on a boat tomorrow for Caye Caulker, a small offshore sandbar/island. It reads like a nice place to spend a few days. It’s certainly popular; it’s where most people who come to Belize end up, me included. 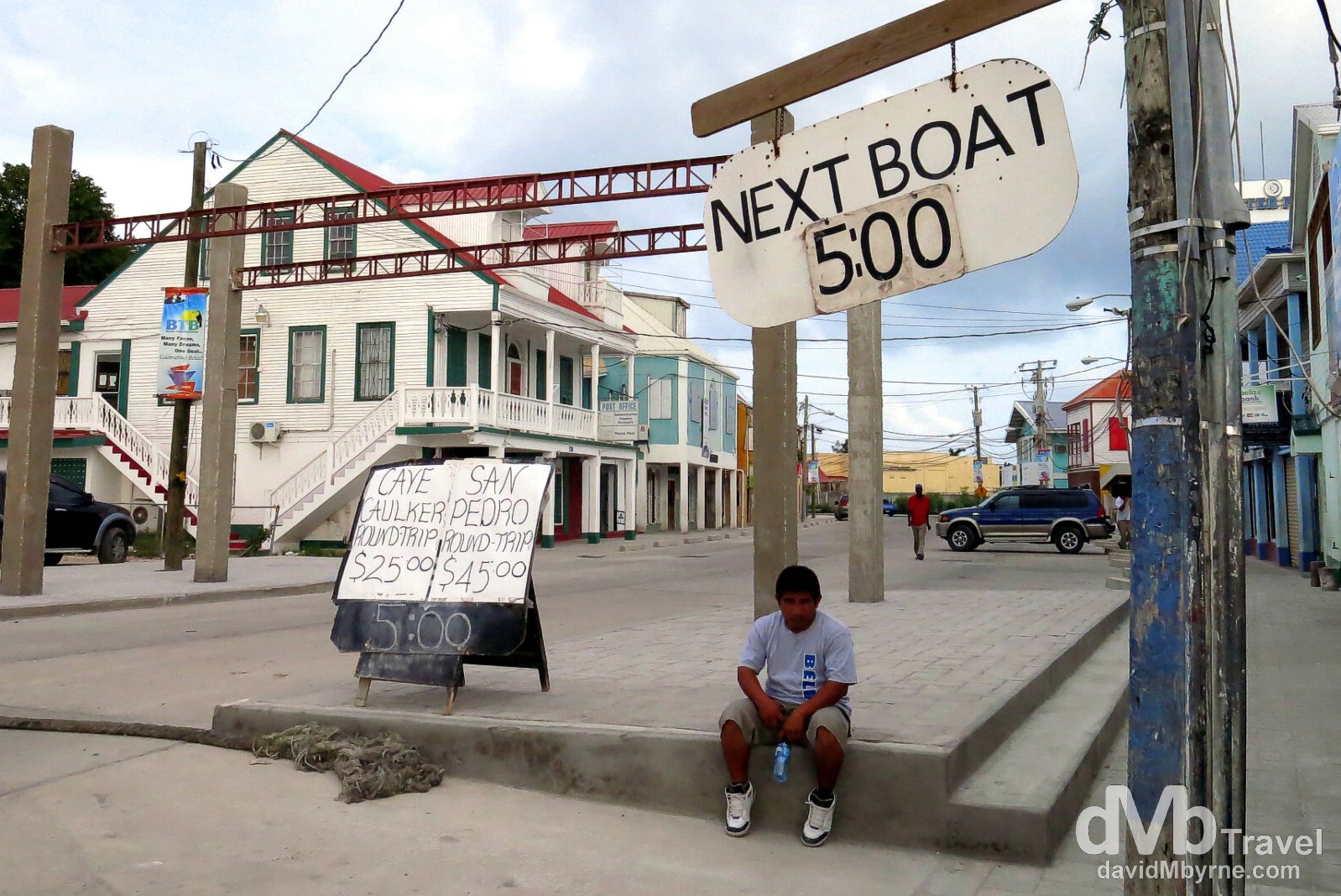 Outside the Ferry Terminal in Belize City, Belize. May 12th 2013.