Beijing is the mammoth capital of China, the world’s most populous country, & has been, for much of the past eight centuries, the political, educational, and cultural centre of the country. The city is renowned for its opulent palaces, temples, gardens, tombs, walls and gates, and its art treasures and universities have made it a centre of culture and art in China. It’s one of the most historic cities in the world with a history that dates back three millennia.

Beijing Blasé
Beijing is somewhere I’m very familiar with. It’s also somewhere I’ve always enjoyed visiting. Today was the last day, & tonight the last night, of my latest visit to the city, a 5-day stint which was my fifth visit to the city stretching back to 2004. I’ve seen the city change a lot over the course of my visits, firstly as it strove to modernise ahead of the 2008 Beijing Olympics & presently as it continues its drive to modernise into a city worthy of the status of capital city of (potentially) the world’s next superpower.

I gave my camera a bit of a break in Beijing; I seemed to spend – & as I suspected would be the case prior to my latest arrival in the city – the majority of my time here visiting embassies & train stations in an ultimately successful, albeit prolonged, crusade to organise onward travel – I’ll be leaving for Mongolia in the morning. I didn’t have a photography to-do list for this visit but I did want, at the very least, to capture Tiananmen Square at night (it’s so much more photogenic after dark) & The Temple of Heaven, for the longest time my favourite Beijing attraction. I did both, although only just. 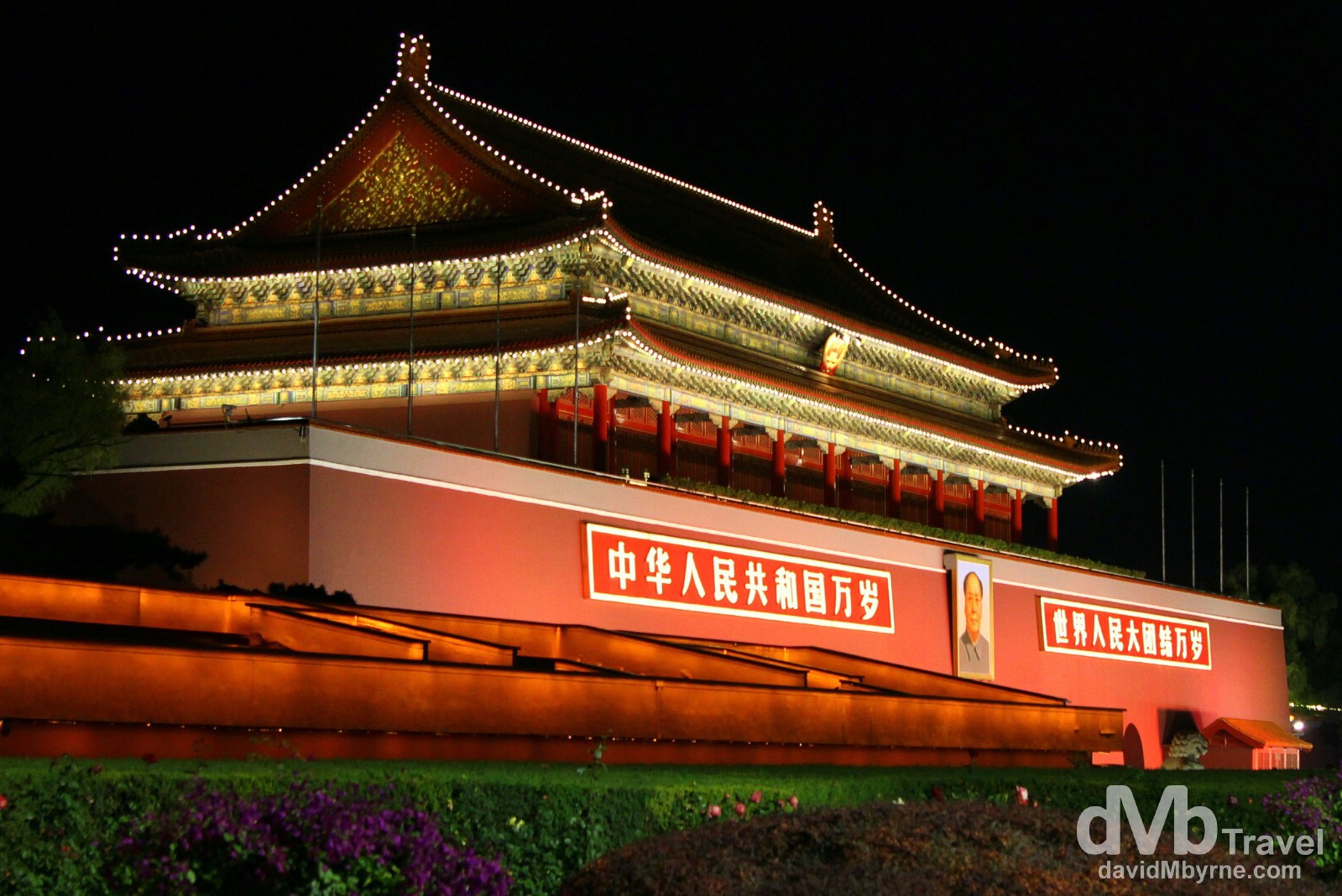 Tiananmen Gate, or Gate of Heavenly Peace, is one of the symbols of China – it appears on the Chinese National Emblem. First built in 1420, the gate is 66 metres long, 37 metres wide and 32 metres high. It serves as the entrance to the Imperial City, which is the location for Beijing’s famous Forbidden City, itself home for almost 500 years to successive Chinese emperors and their households, as well as being the ceremonial and political centre of Chinese government. It was from Tiananmen Gate, on October 1st, 1949, that Chairman Mao, the leader and co-founder of the Chinese Communist Party & whose massive portrait famously hangs from the gate, delivered his liberation speech, declaring that “the Chinese people have now stood up”. Mao was addressing his subjects situated in Tiananmen Square, the famous square of the same name that the gate overlooks. One of the largest public squares in the world, it is infamous as the site of many mass movements, most famously in 1989 when students and workers peacefully protesting for democracy and against corruption & oppression were savagely suppressed. The so-called public square is not very public – it’s off-limits after dark. As a result I had to capture this image from afar & at a less than ideal angle. Beijing, China. October 27th 2012. 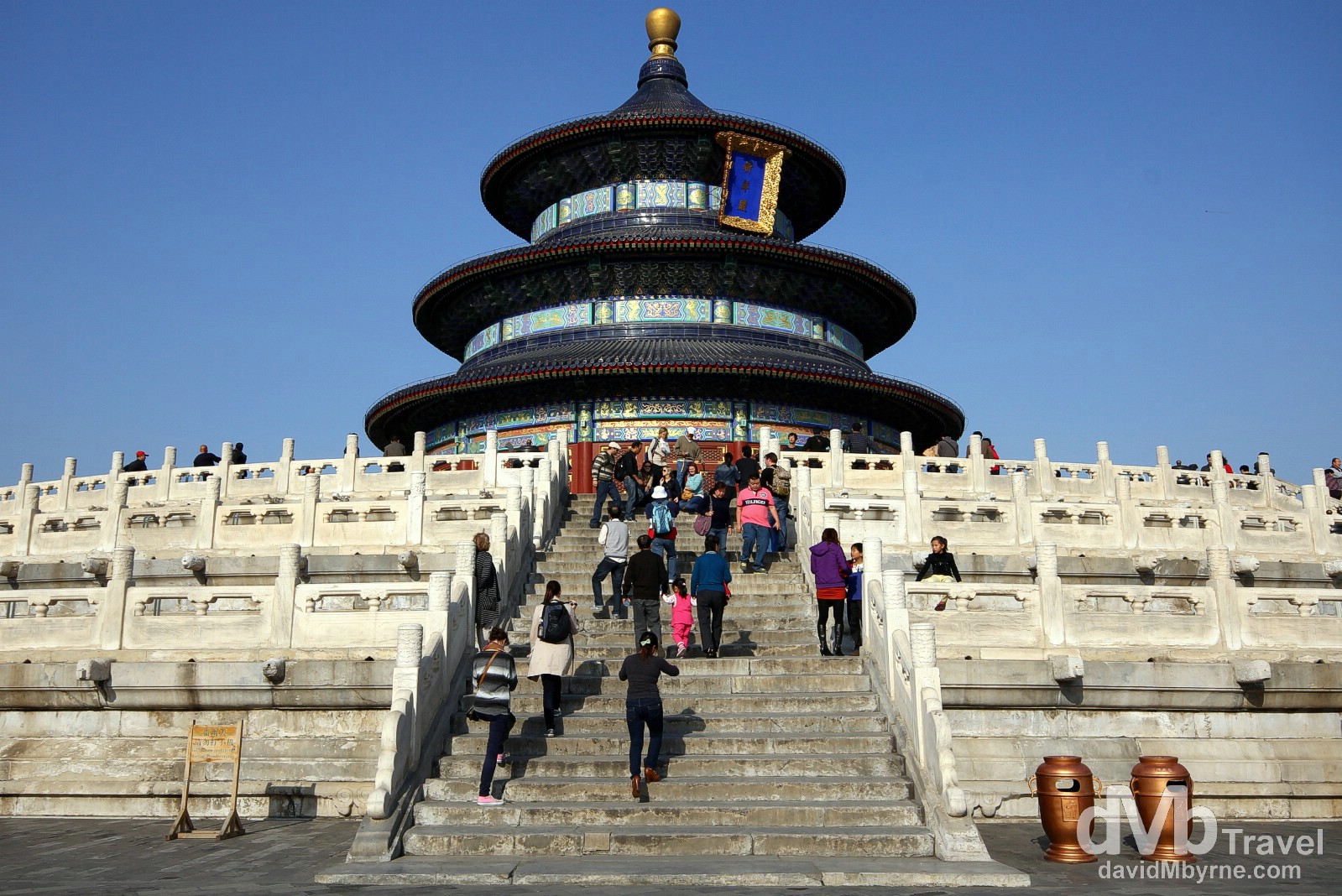 The Temple of Heaven, a complex of religious buildings set in an expansive, 660-acre wooded park, has, for the longest time, been my favourite & thus most photographic Beijing must-see. So, & while I didn’t have much of a photography to-do list for this visit to Beijing, I was especially keen to revisit the complex again. I had days at my disposal so I waited, and waited, and waited for a good, bright day before visiting. After four dull & overcast days I was rewarded today, my last full day in the city, with crystal blue skies overhead & thus I spent a few hours this afternoon photographing the various buildings in the Temple of Heaven complex. This is the stunning Hall of Good Harvests, the main structure of the complex, and it monopolised most of my time. Built in the traditional Chinese style of not using any nails, this is where the Emperor would come to fast and pray, mainly, for a good harvest from the forthcoming year’s crop. It has not been used as such since 1911, the last year China was under dynastic rule, and today is one of the city’s most popular attractions. The magnificent triple-gabled circular building seen here, measuring 36 meters in diameter, 38 meters high, & resting on a three-level marble base, is a reconstruction of the original temple which was destroyed by lightning-induced fire in 1889. Beijing, China. October 27th 2012. 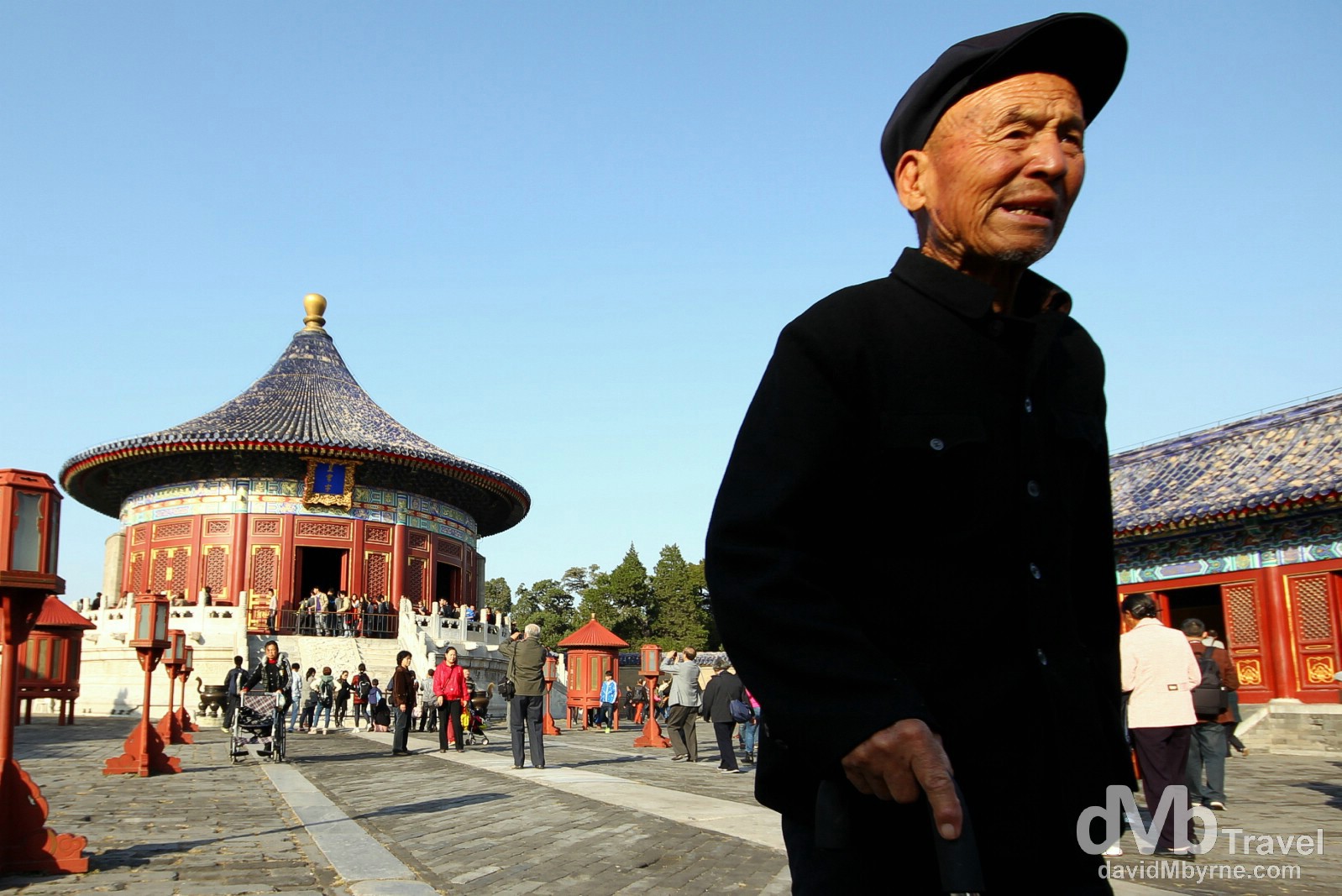 A man in the compound of the Imperial Vault of Heaven. in the grounds of the Temple of Heaven complex, Beijing, China. October 27th 2012.

While I didn’t take my camera out & about with much of a purpose in Beijing it was, of course, always with me on the streets. 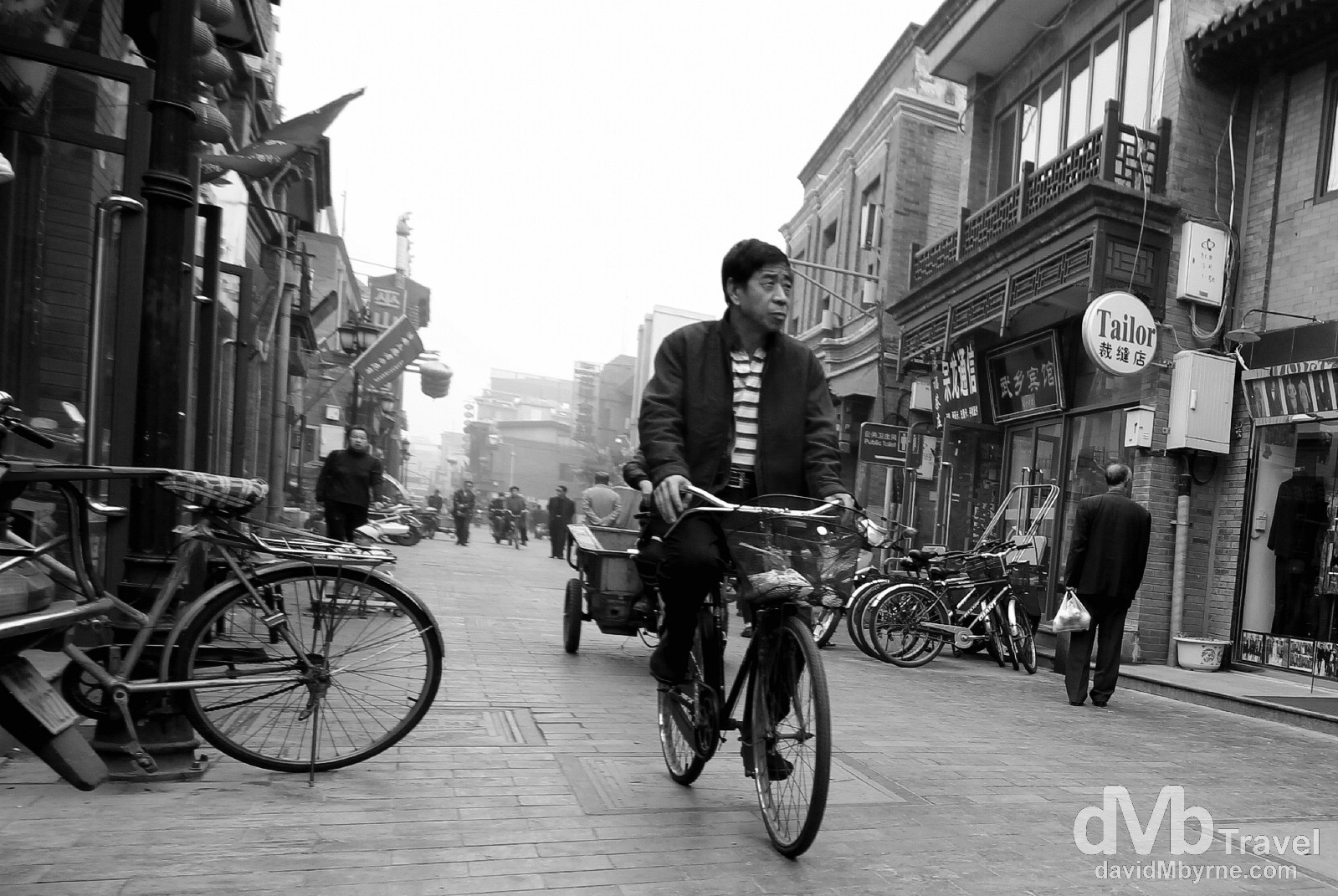 Cycling in the Qianmen district of Beijing, an area of pedestrian streets, narrow alleyways & dodgy plumbing. I always call this area of the city home when I’m in Beijing & in the push for modernisation it’s Qianmen, more than any other area, that has been transformed the most in recent years – it’s virtually unrecognisable from how I remember it being in 2004 (& was one big building/construction site when I was last here in 2008). Qianmen, Beijing, China. October 26th 2012. 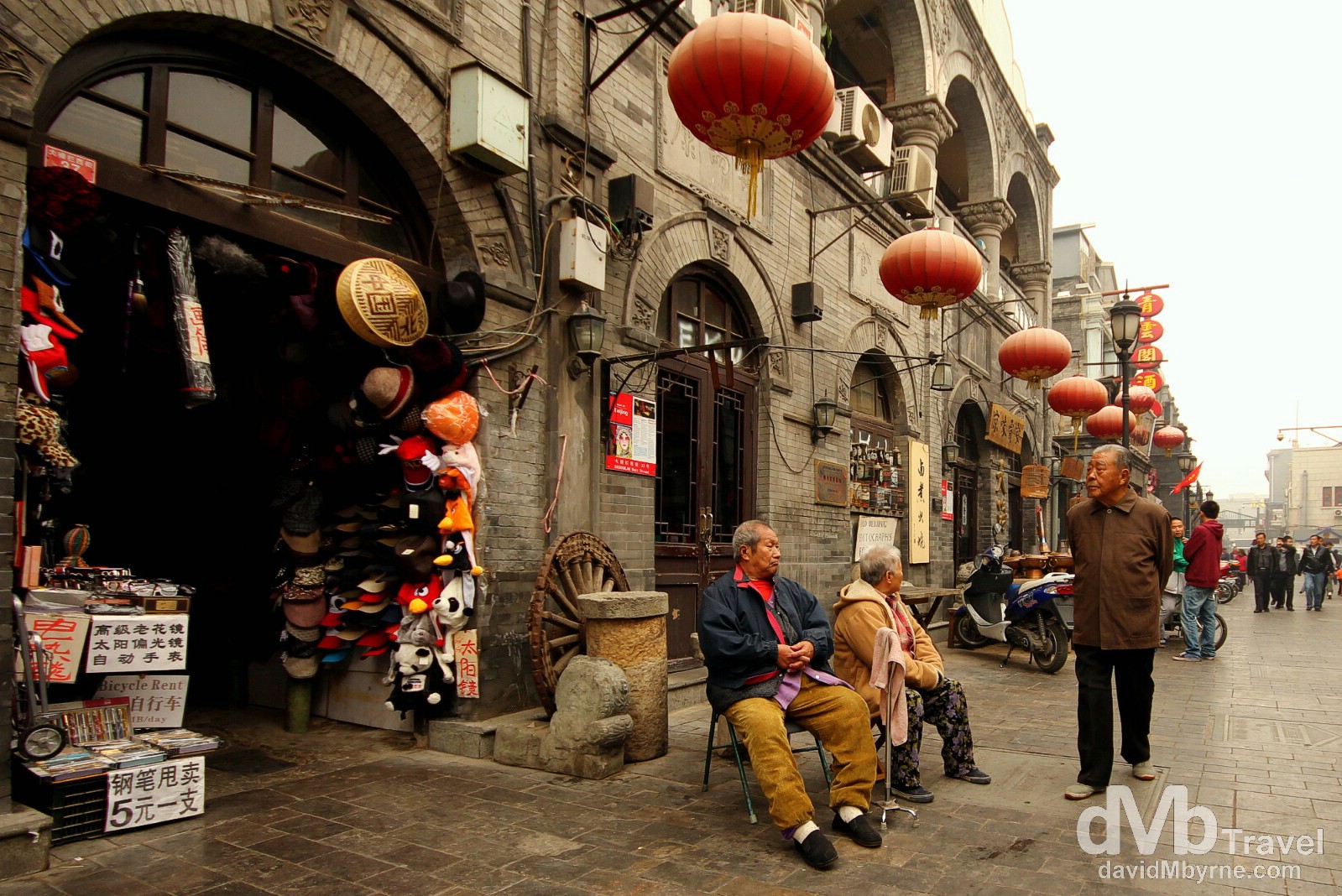 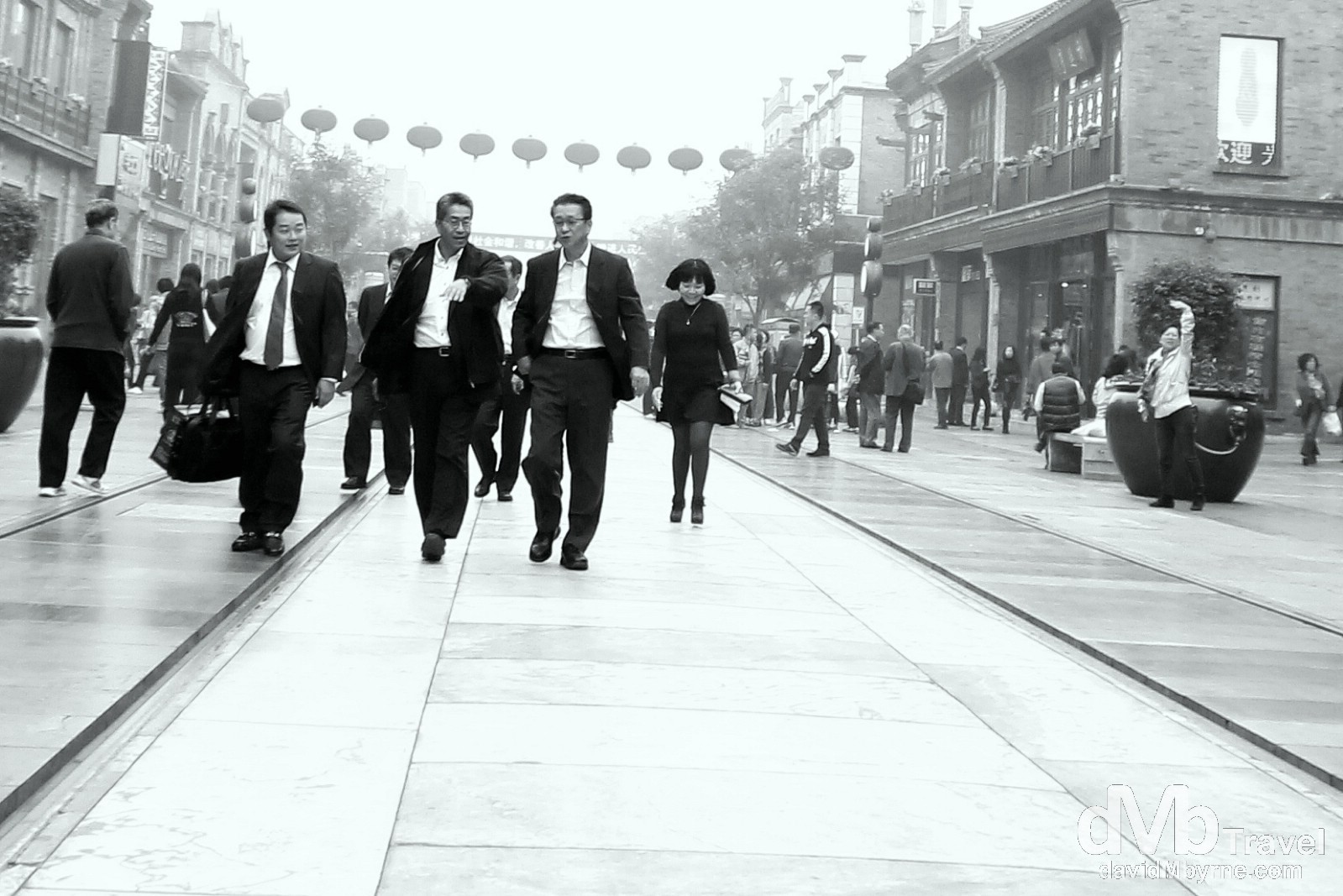