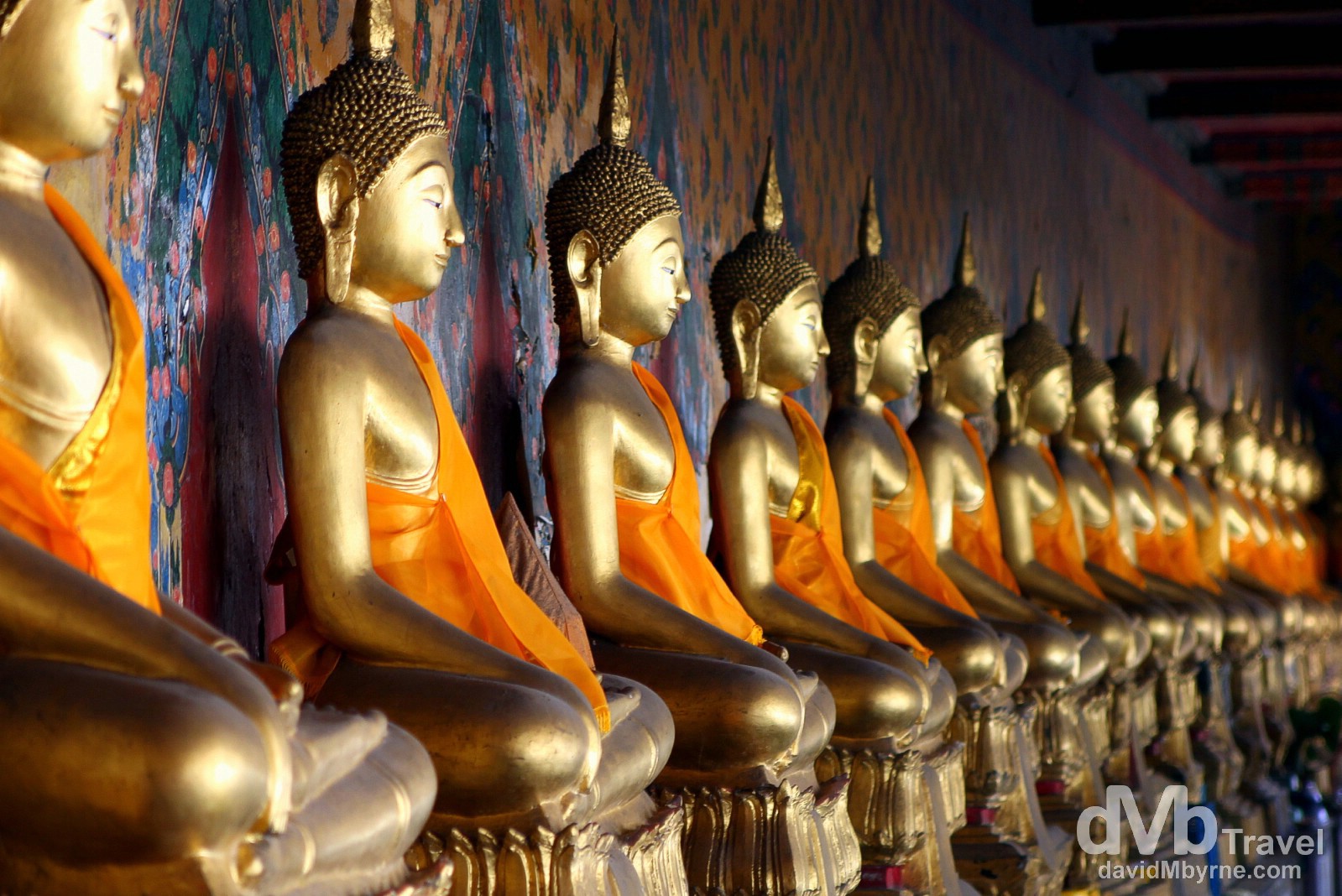 Bangkok is the the capital, largest city and chief port of Thailand, the city that has dominated the country’s urban hierarchy, as well as its political, commercial and cultural life, since the late 18th century. It’s also one of the leading cities in Southeast Asia, its geographical position in the region making it a major regional transport hub.

Bangkok To-dos
For a city of its size, Bangkok is surprisingly full of quiet escapes. Just step out of the street noise and into the calm of one of the city’s 400 wats (temple-monasteries) or take a river taxi on the caith main waterway, The Chao Phraya River. Must sees include Wat Phra Kaew, aka The Emerald Buddha Temple, and The Grand Palace (see below picture), Wat Pho, aka Temple of the Reclining Buddha, and Wat Traimit, home to The Golden Buddhe, an impressive 3-metre-tall, 5 1/2-tonne solid gold Buddha. Other city sights include the touristy Wat Sai Floating Market in Thonburi, a boat trip through the city’s extensive and pongy network of canals (klongs), the Queen Saovabha Memorial Institute Snake Farm, Jim Thompson’s House and the renowned Oriental Hotel. 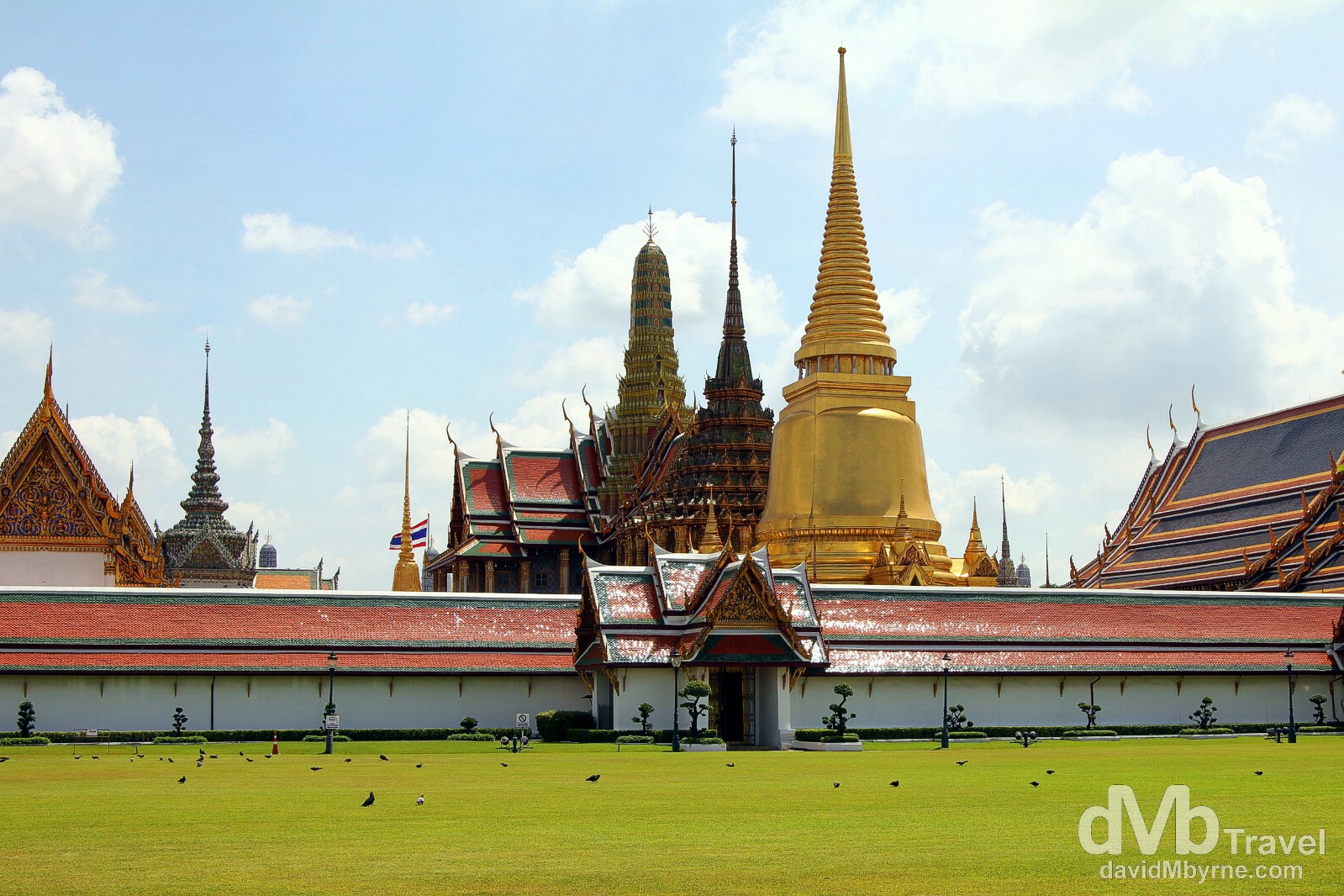 The Grand Palace is a complex of buildings at the heart of Bangkok. Construction of the place began in May 1782 & it served as the official residence of the Kings of Siam (and later Thailand) through until 1925. As well as the King, his court and his royal government would also have been based on the grounds of the palace. The present monarch, King Bhumibol Adulyadej (Rama IX), currently resides at Chitralada Palace, but the Grand Palace is still used for official events; several royal ceremonies and state functions are held within the walls of the palace every year. The palace is one of the most popular tourist attractions in Thailand. The Grand Palace, Bangkok, Thailand. March 7th 2012.

Although I love this city I have always found it hard work and tiring. But if you can resist the urge to dash to the nearest beach it’s worth putting up with the coronary-inducing traffic jams, the pollution, the sticky weather, & the bartering over everything to experience one of Asia’s most exciting cities. I’ve always enjoyed the in-you-face side of Bangkok. I also love the cheap and gorgeous street food, the nightlife (from the unfortunate go-go bars of Patpong to the backpacker bars on the Khao San Rd), the temples and the tuk-tuks weaving in and out of choked traffic. But the thing I most like about Bangkok is the overall convenience of the place for the budget traveller; you can get, and withing reason do, anything you want here. 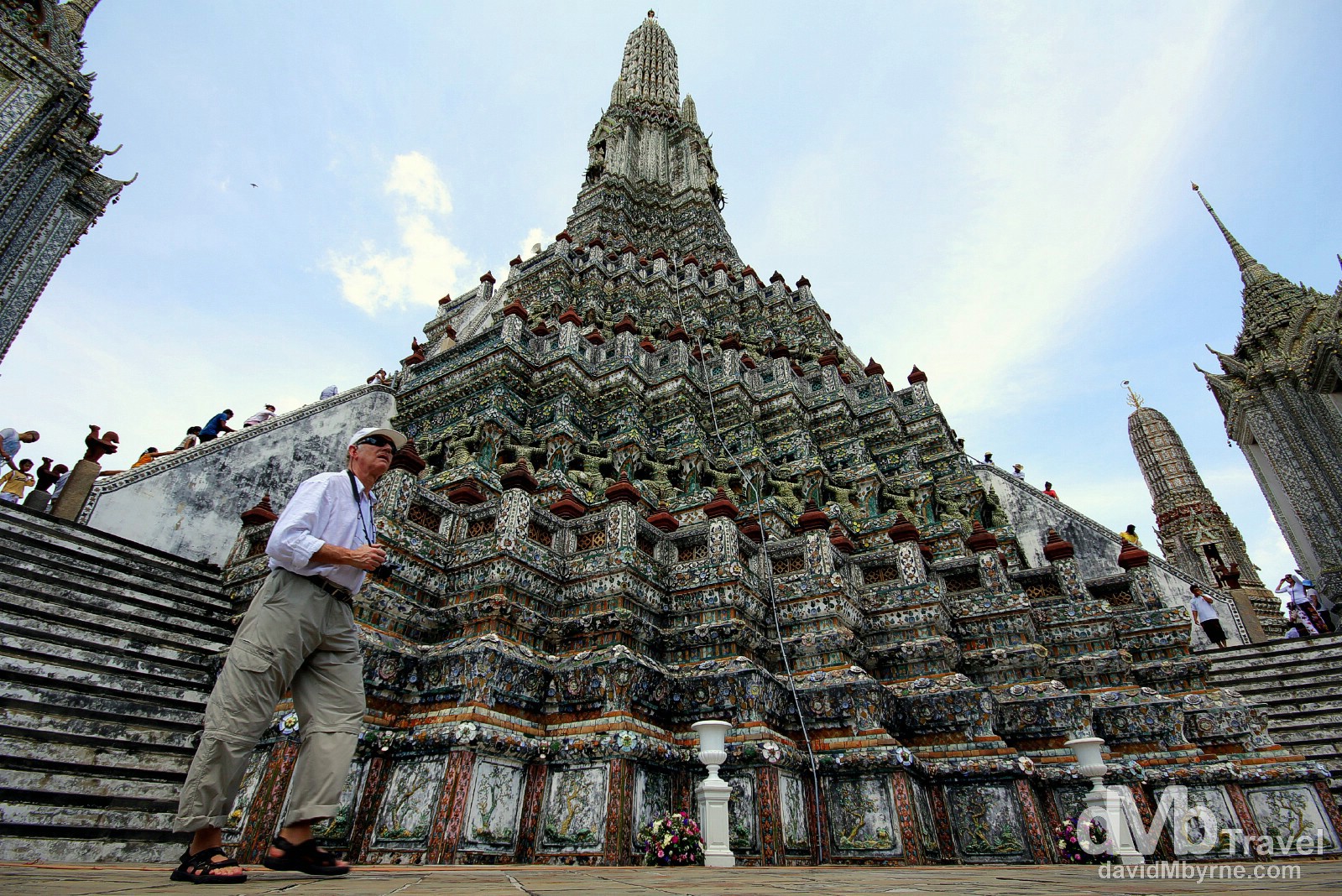 A wide-angle shot of the massive central prang (stupa) of Wat Arun, Bangkok. The massive stupa is a multi-tiered, wedding cake-esque tower decorated by – rather bizarrely – seashells & pieces of porcelain, meaning it look great from up close and from afar. It is surrounded by 4 smaller stupas, two of which (kind of) appear here to be, thanks to the wide-angle, almost falling in on the central tower. It’s a mighty impressive sight in a pretty cool temple. Wat Arun, Bangkok, Thailand. March 7th 2012.

It has been a while since I was last in Bangkok so I can be forgiven for (almost) forgetting how manic this city is. Or how hot it is; as I type it’s 34 degrees (Celsius that is America, Celsius). It was 5 degrees when I left Seoul some 3 days ago, a few days during which I’ve done nothing too demanding. I’ve sweated a lot but that’s not a huge deal; if being too hot is the worst I have to deal with then I’m ok. And I am. I’m feeling very travel right now, 3 days removed from an (almost) rut-ish routine I’d been living in Seoul for what seemed a long, long time (& it was a long, long time). But the heat aside I’m feeling kind of rejuvenated. Yes, it’s only day 3 of this trip & I haven’t done anything other than sweat, visit a few of Bangkok’s attractions & drink. And that’s fine with me. I’m lovin’ it. Every bit.

I wanted to keep things easy when I first arrived in the city after my why-does-it-take-so-long trip from Seoul so I headed for familiar territory – straight to the backpackers hangout of the Khao San road. Some love it, some hate it. I’m somewhere in between. But it serves a purpose. 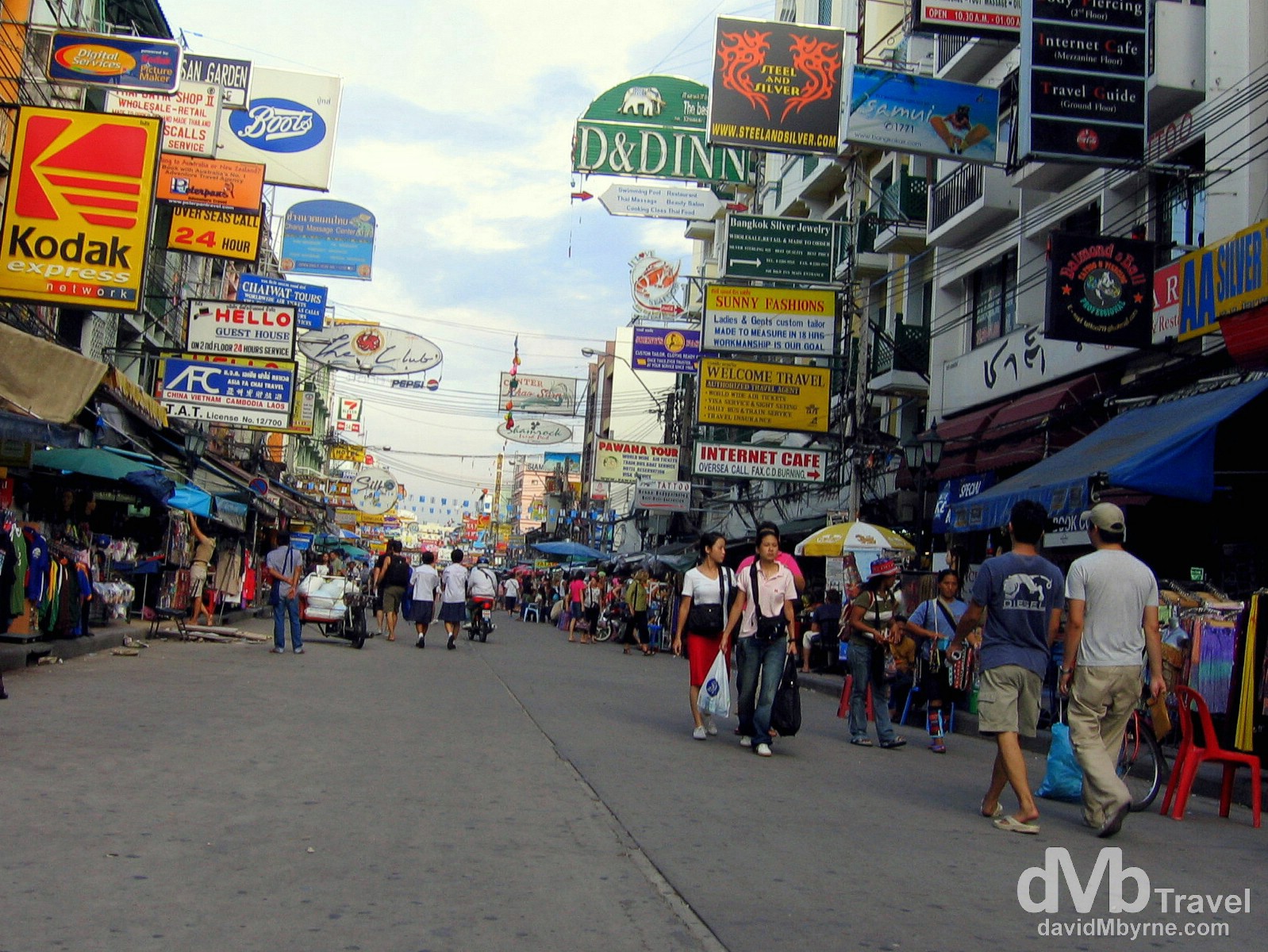 The backpacker hangout of the Khao San Road in Bangkok, Thailand. Picture captured on a previous visit to Bangkok, September 22nd, 2005.

I was last here in September 2005. A lot seems to have changed since then but I guess almost 7 years is a long time on the Khao San Road. Yes, it still has the stalls of knock-off sunglasses, t-shirts & other traveller wants; it still has more bars, cafes, travel agents & street food stalls than it needs; & of course it still has all those backpackers. But these days it even has McDonald’s (2 of them no less), a KFC & a Burger King (I didn’t think it could get any more touristy but it has). All are here to cater to all those backpackers, backpackers who, just like me, are passing through en route to somewhere & not doing much in the process. I’m out of here in a few hours for an overnight train trip to Chiang Mai in the north of the country (it’s almost 10 years since I was last there). I don’t really have a plan for Chiang Mai either but I’m going there anyway. 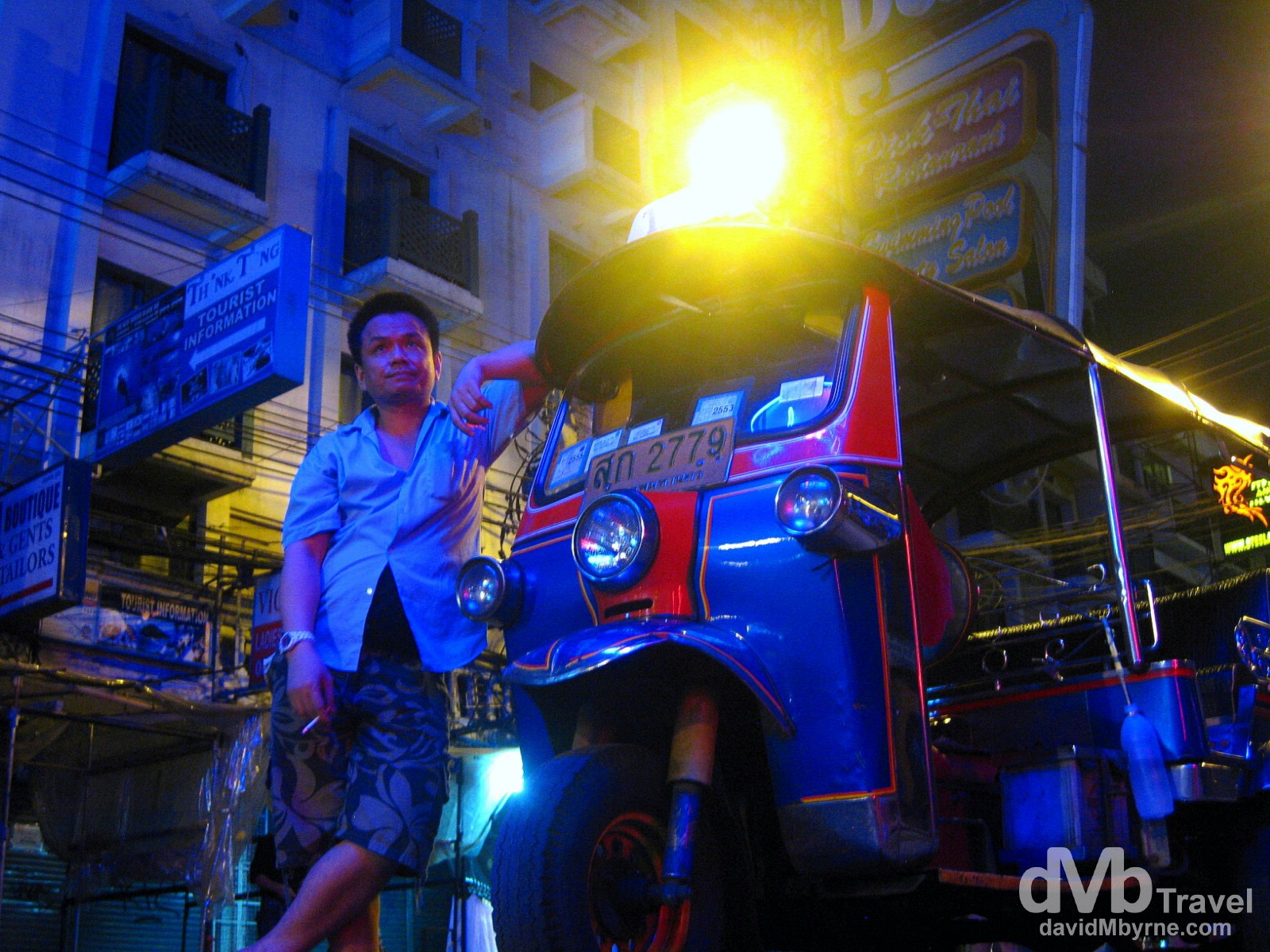 If you can’t avoid the manic traffic on the streets of Bangkok then you may as well throw yourself right into to mix & how better than in one of the city’s ubiquitous tuk-tuks, the small, noisy 3-wheel transport options, the riding of which is a quintessential part of the Bangkok experience. But good luck negotiating a reasonable fare or even getting where you want to go; tuk-tuk drivers are notorious for taking both tourists & their wallets for a ride. This is a picture of a tuk-tuk driver by his tuk-tuk on the Khao San road, captured at 3 a.m. this morning after a night on the town. Khao San Road, Bangkok, Thailand. March 8th 2012