I‘ve just spent the last week the Indonesian tourist haven island that is Bali, well-know for its beaches (on which to surf, laze, get drunk on or watch a sunset), temples, volcanoes, arts & crafts, paddy fields, tropical forests full of monkeys, caves, fast-flowing rivers, & culture. Quite the line-up of highlights for such a small island. Outside the village of Petulu in central Bali, Indonesia. June 15th 2012

It’s good to be back in Asia having spent the last 10 weeks (73 days actually) in Australasia, the majority of it in a camper van touring the North & South Islands of New Zealand. For this my second visit to Bali, but first since early 2003, I based myself just outside the central town of Ubud, the culture capital of the island & a place, much like the island itself, overrun with people, temples, rice paddies, galleries and arts & craft stores. The island is as I remember it; hot & hectic, the former a welcomed change from the chillness of New Zealand & the latter surprisingly comforting. It – Bali – is also a nirvana for photographers; those aforementioned highlights, not to mention the hustle & bustle of everyday life on the streets, makes this a doubly exhausting place to be for a photographer.

Making offerings to the Hindu gods in Ubud (

There are over 20,000 banjar (temples) on the island of Bali meaning you’re never too far from one wherever you may be. I hung around the outside of this temple (I didn’t attempt to enter it) in the village of Singakerta, on the outskirts of Ubud, photographing locals coming & going. And because it was a religious day there were plenty of locals, including young families, milling about. Bali, and especially Ubud, offers ample opportunity to buy from an extraordinary broad array of arts and crafts, all of which are produced in the region, or so it is said – I looked but there were no Made in China stickers to be seen anywhere. Must-have souvenirs include intricate wood carvings, paintings or local fabrics in various forms. Bali offered none of the order I’d become accustomed to having spent the previous 70+ days in Australasia. It took a little bit of getting used to, but not too much getting used to. Driving around the island & sharing the narrow roads with gung-ho, devil-may-care locals was precarious at best & always had me on my toes the whole time. But it was the only way to get out into the countryside to see the real postcard Bali & get shots like this one, a picture that captures a typical Balinese countryside scene perfectly. Not surprisingly rice is Bali’s main crop & the elaborate irrigation systems found in the paddy fields dotted all over the island encourage a cooperative way of life between the rice growers of the villages in the Balinese countryside. Looking at theses amazingly stepped rice terraces in Ceking I can only image the cooperation that they demanded. Ceking, Bali, Indonesia. June 19th 2012.

Another Bali must-do. Kind of. 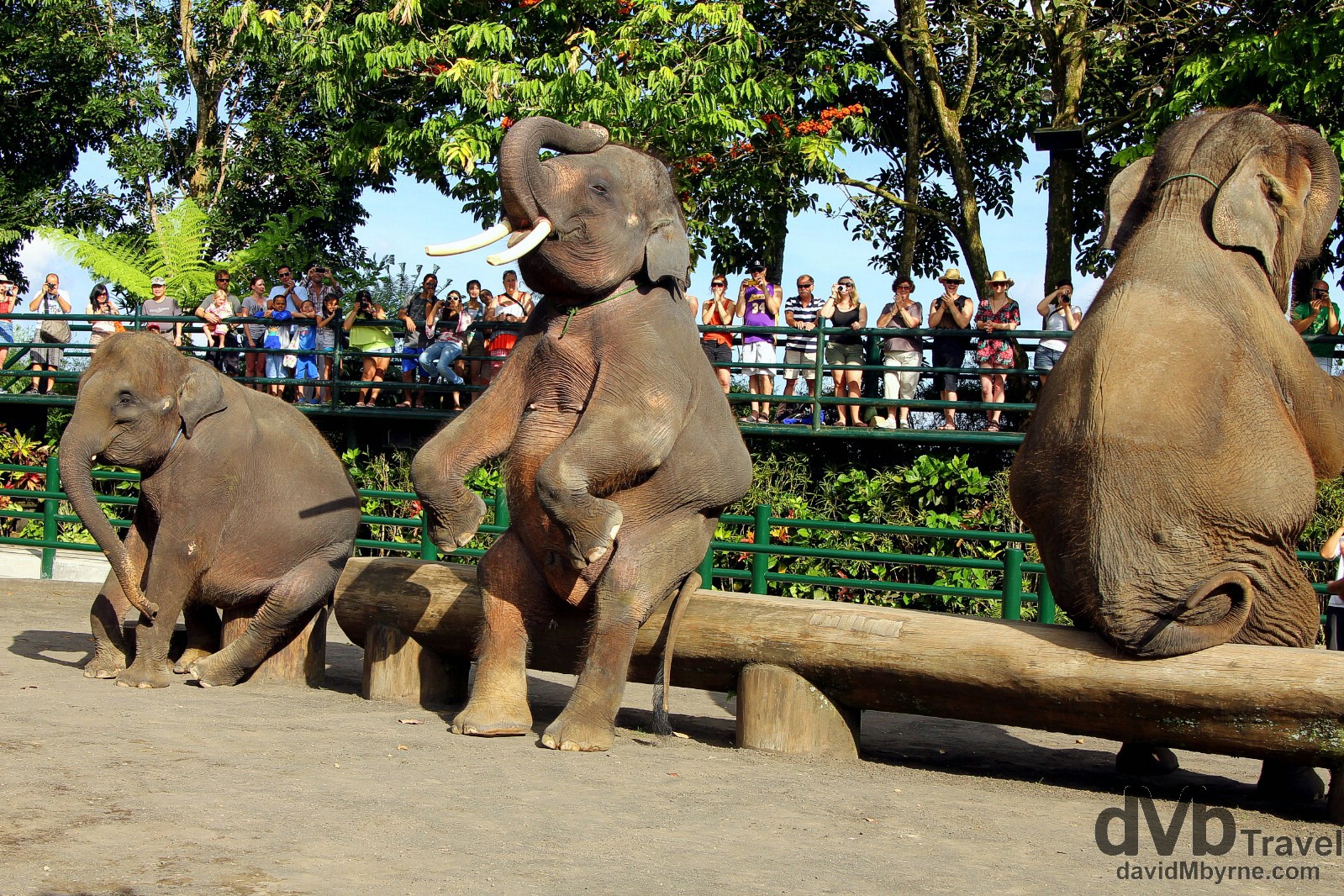 I didn’t mean to explore a Bali jungle, it just happened when I went exploring the unknown around Goa Gajah, or Elephant Cave, a cave on the outskirts of Ubud that was built in the 9th century & served as a sanctuary. The cave, whose façade is a carving in relief of various menacing creatures & demons carved right into the rock, is/was a bit of a let-down but taking a walk into the deep jungle nearby brought me down here. And no, I’ve no idea why there was someone down here sweeping the riverbank, as pointless an exercise as I’ve seen in a long time. Jungle scenery near Goa Gajah (Elephant Cave) on the outskirts of Ubud, Bali, Indonesia. June 19th 2012.