“Sri Lanka was a treat, its scenery amazing, its food delicious, its people some of the most genuinely warmest, welcoming I’ve yet encountered. ‘The Nation of Smiling People’ indeed.”

Having just spent the last eleven days in this country, I didn’t think there was a nowhere here in Sri Lanka but right now I’m sitting slap-bang in the middle of it. I’m in room 102 of the Green View Hotel near Bandaranaike International Airport in Colombo, the Sri Lankan capital. I’m assuming the green view is a reference to the fields, mostly rice paddies, that surround me. There’s little else that I can see. I’ve been here most of the day having arrived earlier in the afternoon from Kandy – itself located only some 100 kilometres away slap-bang in the centre of tear drop-shapped Sri Lanka – via the combination of a creaking & leisurely 3-hour train ride, a rickety 2-hour bus ride & a buzzin’ 10-minute tuk-tuk ride. I left Kandy at 5:30 a.m. this morning and I’ve another appointment with the same tuk-tuk, & its affable driver, at that exact time tomorrow morning, this time to take me to the aforementioned airport for my flight to Kerala in south-western India. Oh boy this is tiring. I’m sure glad I’m unexpectedly in the calming middle of nowhere. 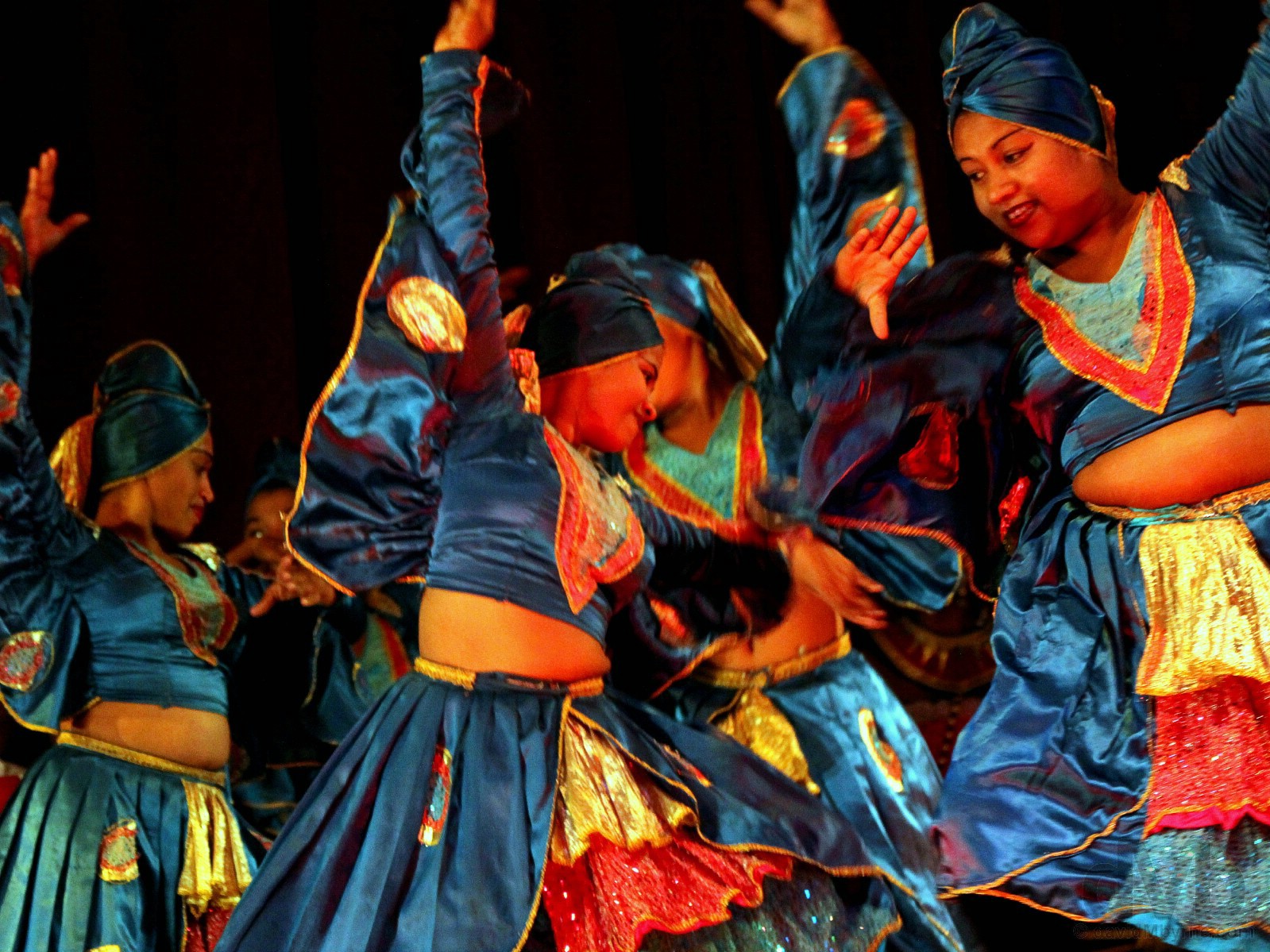 1. Dancers performing as part of a Cultural Performance at the Kandyan Art Association & Cultural Centre, Kandy, central Sri Lanka. September 9, 2012 || “Kandy is Sri Lanka’s historic UNESCO-listed second city & cultural centre. The country’s capital in the 16th century, this sacred Buddhist site, popularly known as the city of Senkadagalapura, was the last capital of the Sinhala kings whose patronage enabled the Dinahala culture to flourish for more than 2,500 years until the occupation of Sri Lanka by the British in 1815. Known today as a city of culture & beauty, it’s one of Sri Lanka’s biggest draws.” (For more, see the posting Kandy, Sri Lanka.)

Pictorial Closure
I wanted to put closure on my trip to the country by grouping some of my favourite captures from the 11 days that I spent touring its southern & central regions. A sort of a pictorial recap. So here are 10 more pictures, for 11 total, from my time in Sri Lanka, an 11-picture recap from as many days in the country. 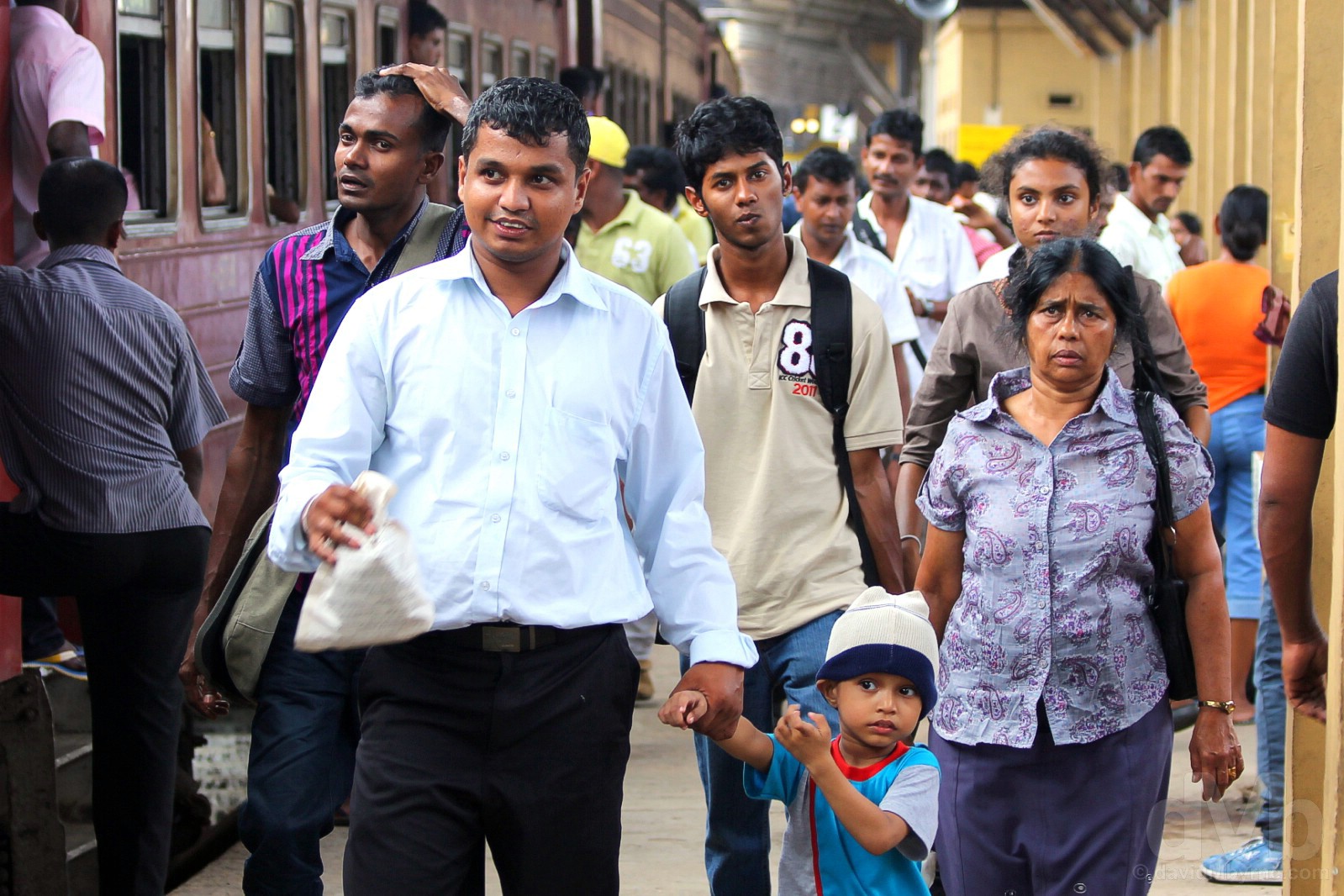 2. On the march in Galle train station, southwestern Sri Lanka, August 31, 2012 || “I felt liberated having finally been freed from the sweaty jam of the train carriage, or more precisely from the strangled passage between carriages 3 and 4. There were still people everywhere, milling this way and that on the busy platform of Galle Train Station, but at least, and unlike on the train, they were not physically on top of me.” (For more, see the posting Riding The Rails || Colombo to Galle, Sri Lanka.) 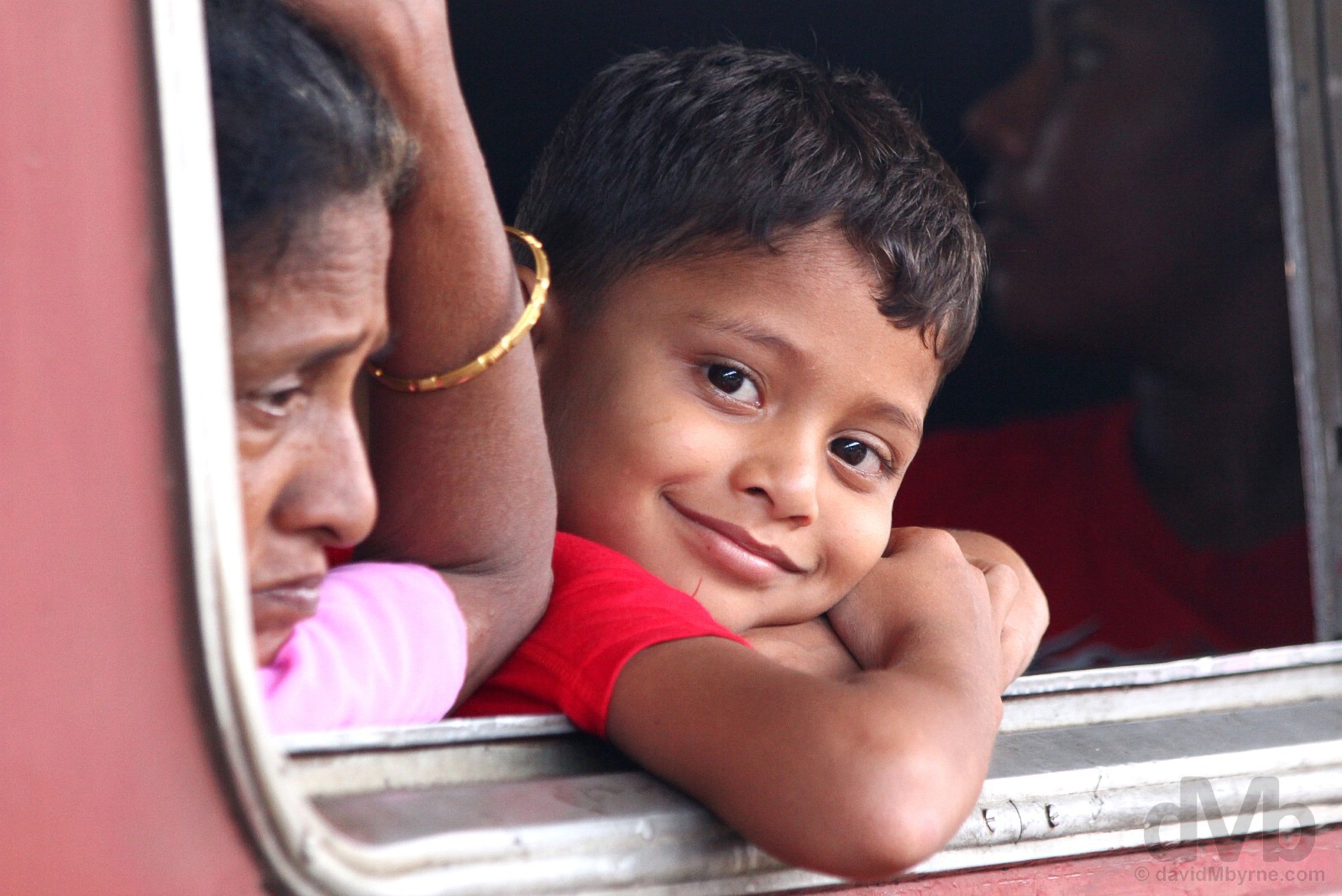 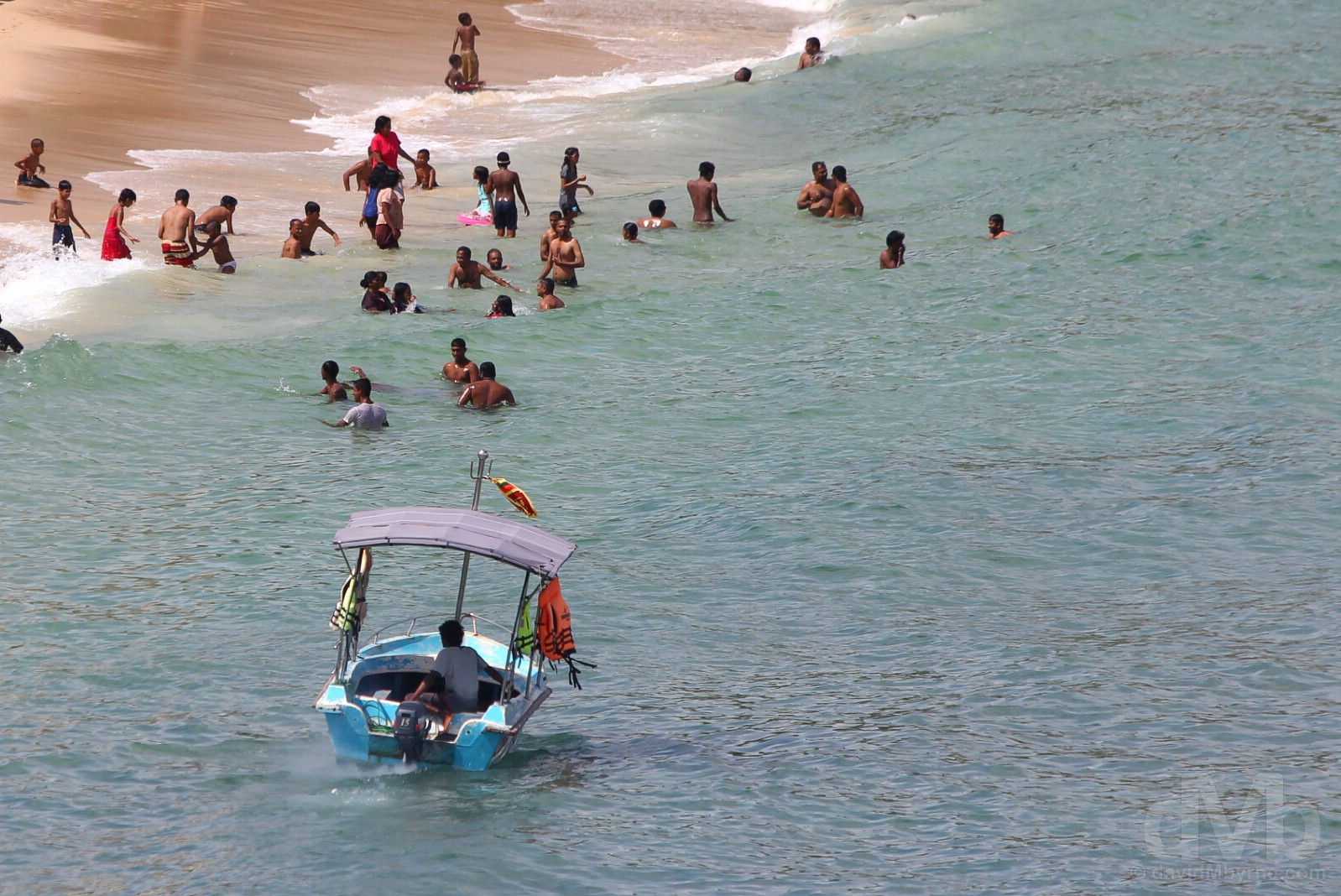 4. Unawatuna Beach, southern Sri Lanka. September 1, 2012 || “The beautiful beach at Unawatuna is located just 6 kilometres south of Galle in southwestern Sri Lanka, right in the middle of the southern coastal belt, the most popular stretch of Sri Lankan coastline with locals & tourists alike – the region’s primary source of income is from tourism. This means Unawatuna, a clam body of water somewhat sheltered by a bay, is rarely quiet. In fact, it’s one of the most visited beaches in Sri Lanka.” (For more, see the posting Unawatuna, Sri Lanka). 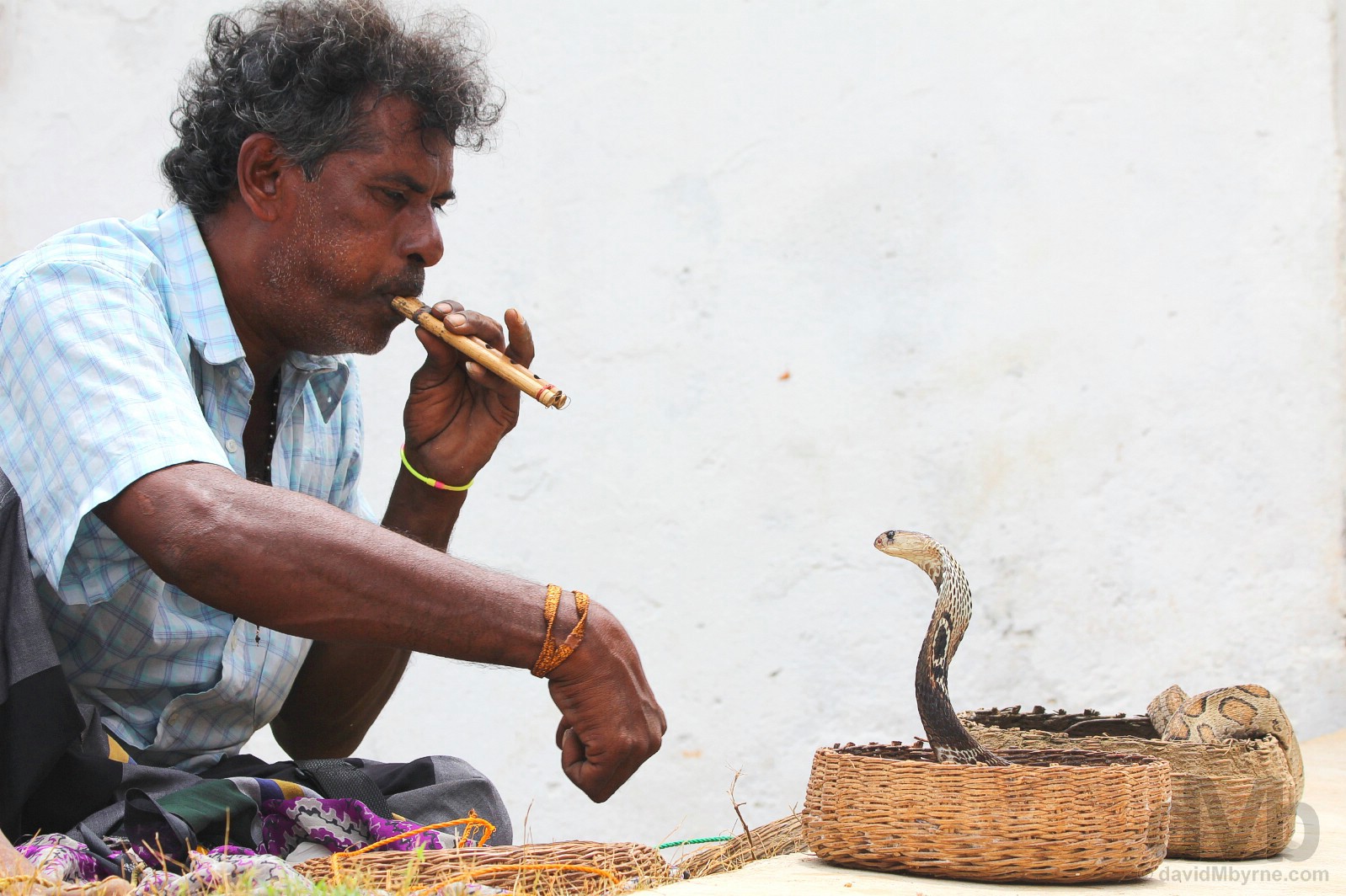 5. A snake charmer in the grounds of Galle Fort in Galle, southwestern Sri Lanka. September 2, 2012 || “Today Galle Fort, while still a working community, commercial & administrative centre, is a warren of atmospheric streets & lanes lined with centuries-old buildings offering up one of the best-preserved examples of colonial life in Asia.” (For more, see the posting Galle, Sri Lanka.) 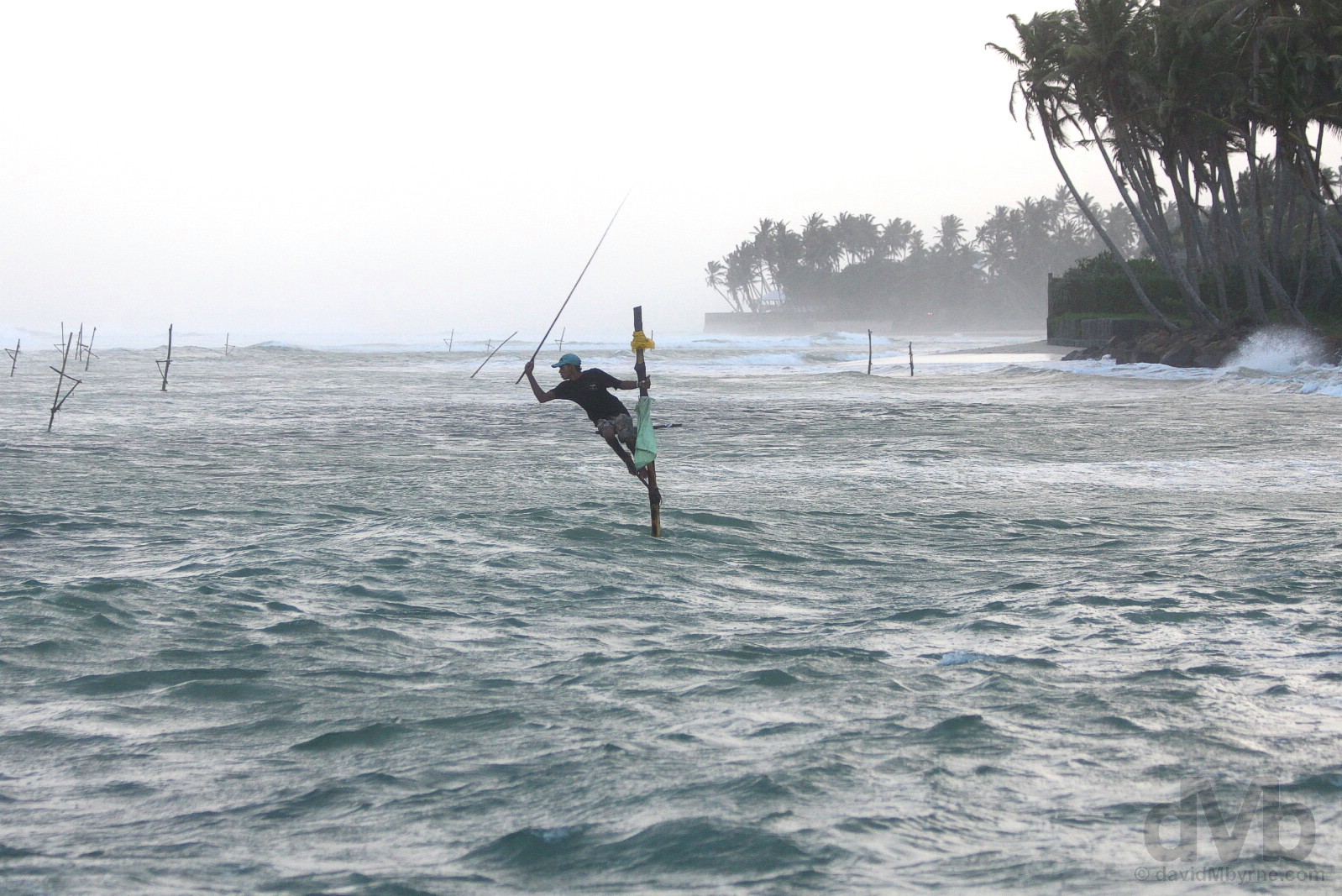 6. A stilt fisherman plying his craft outside the village of Koggala, southern Sri Lanka. September 2, 2012 || “Stilt Fishing, a tradition still practised by only a few communities in western & southern Sri Lanka, has got to be high up there on the tough-ways-of-making-a-living list. It certainly didn’t look like much fun from where I was standing – firmly on solid ground – earlier today.” (For more, see the posting Stilt Fishing, Sri Lanka.) 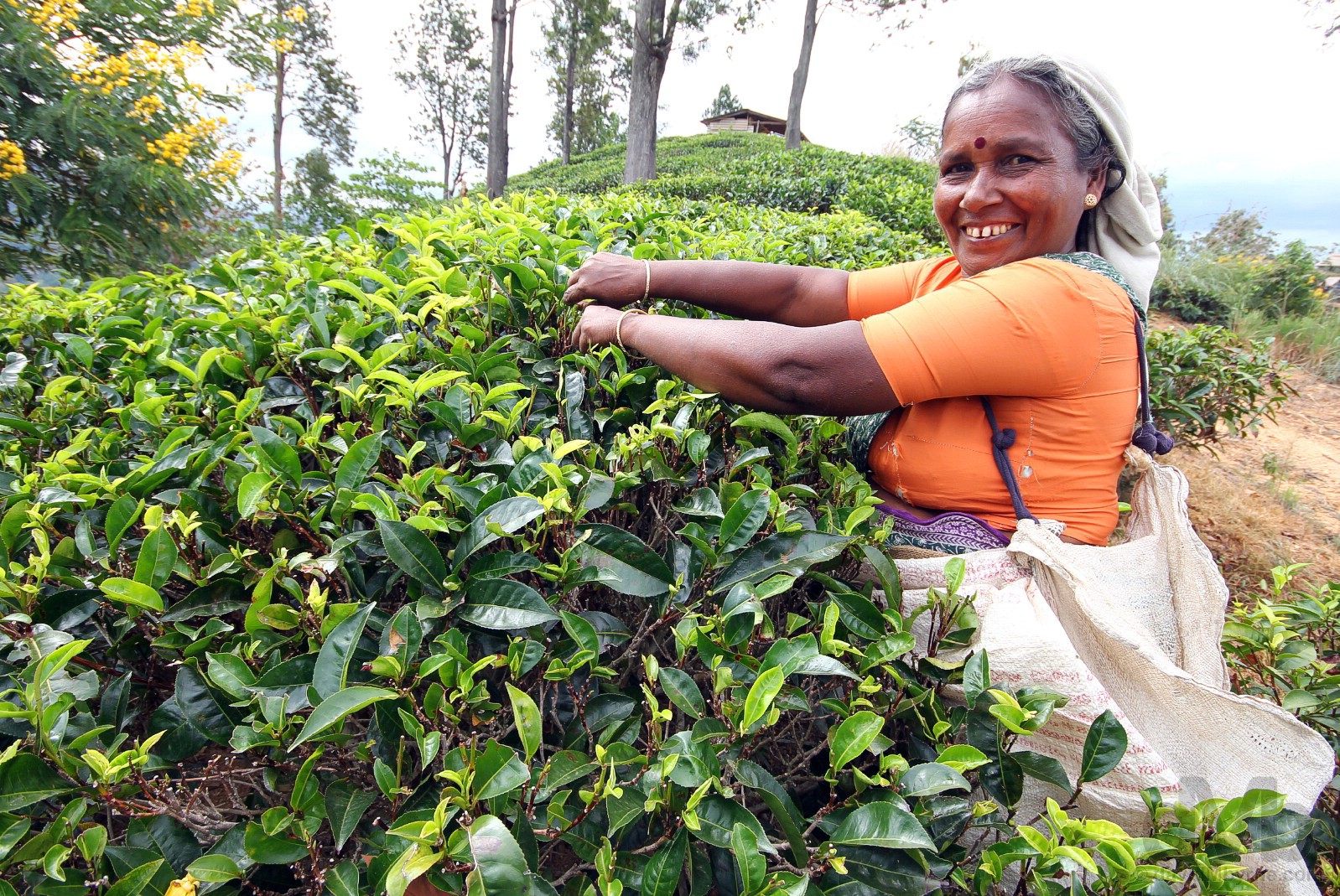 7. A tea leaf picker in a tea plantation in the hills outside Ella, central Sri Lanka. September 4, 2012 || “This is tea country – the first tea leaves harvested in Sri Lanka were planted in the hills between Nuwera Eliya & Kandy & today Nuwere Eliya is the chilly tea capital of the fourth largest tea producing country in the world. Over the past few days I have taken two tea plantation factory tours, neither of which allowed photography, which was a real shame given the decades-old rituals, facilities & equipment still used in the production of tea in this country.” (For more, see the posting Ella & Nuwera Eliya, Central Sri Lanka.) 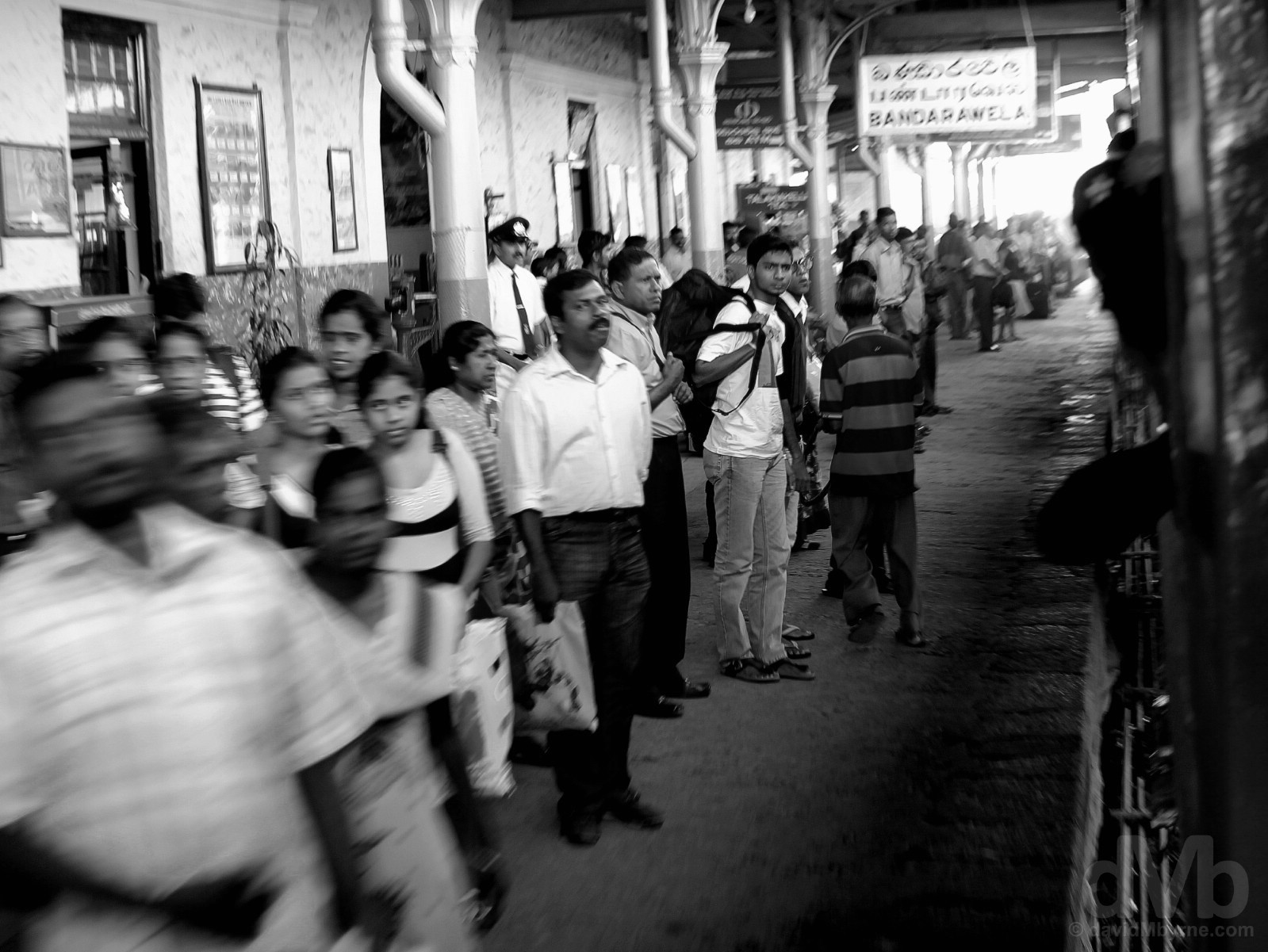 8. Waiting as the Colombo-bound train comes to a stop on the platform of Bandarawela Train Station, central Sri Lanka. September 5, 2012 || “There’s something special about train travel in Sri Lanka. Something very special indeed. Yes, it’s a slow means of transport; schedule times are rarely, if ever, met; the rolling stock, holdovers from the British colonial days of the early 20th century, are rickety & have no windows or doors; the trains are more often than not chronically overcrowded; and the names-on-a-ledger booking system antiquated meaning that unless you confirm in advance, and/or are departing from an origin station, then getting preferred tickets is a challenge (it was for me & for many days to boot).” (For more, see the posting Riding The Rails || Sri Lanka.) 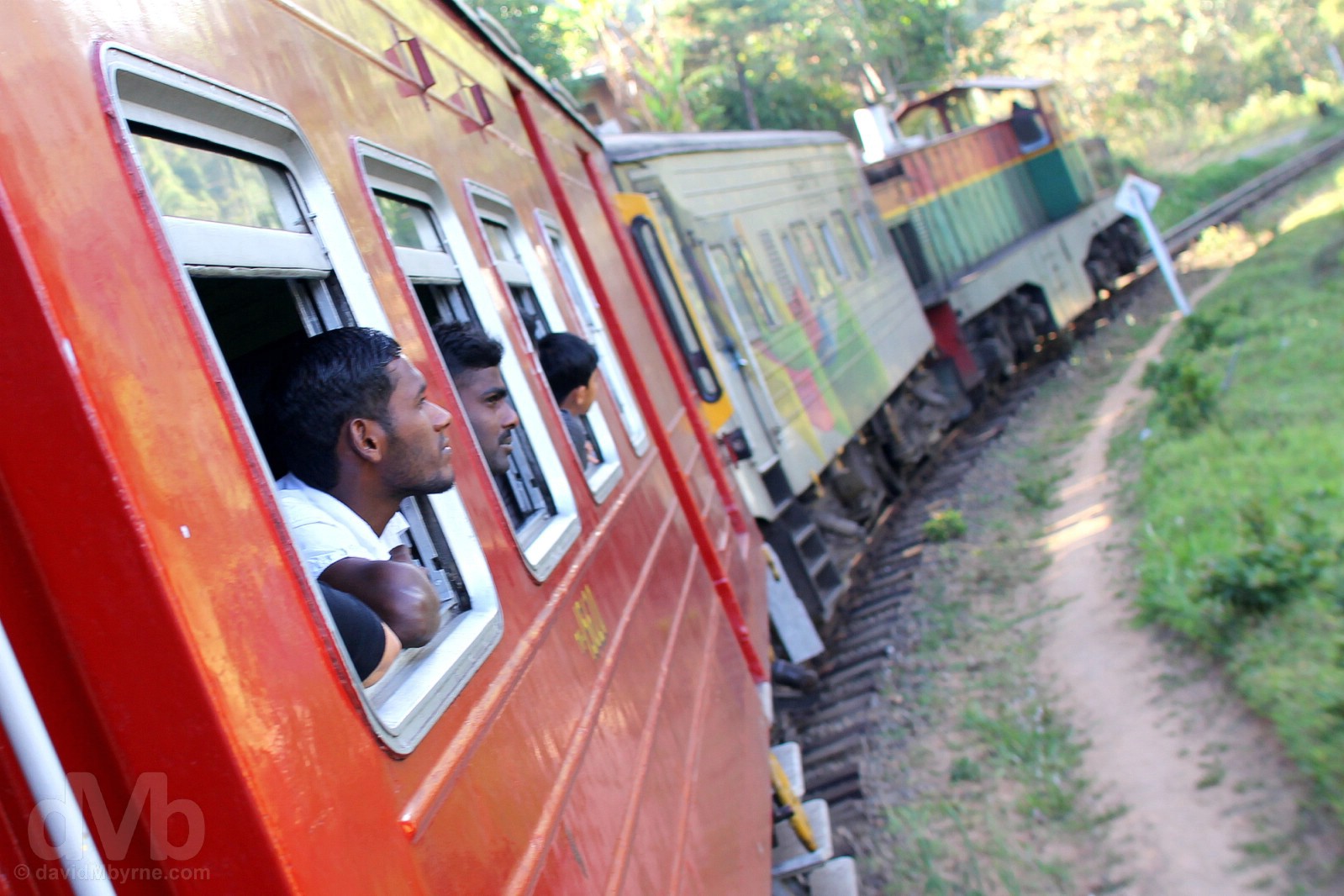 9. Taking in the views from the Badulla to Colombo train in central Sri Lanka. September 5, 2012 || “…journeys like the one I took today, a 110 Sri Lankan rupee (€0.60), 3-hour journey from Ella to Nanu Oya through a section of the picturesque, rolling hills & tea plantations of central Sri Lanka, was the definite highlight of my time in the country so far…” (For more, see the posting Riding The Rails || Sri Lanka.) 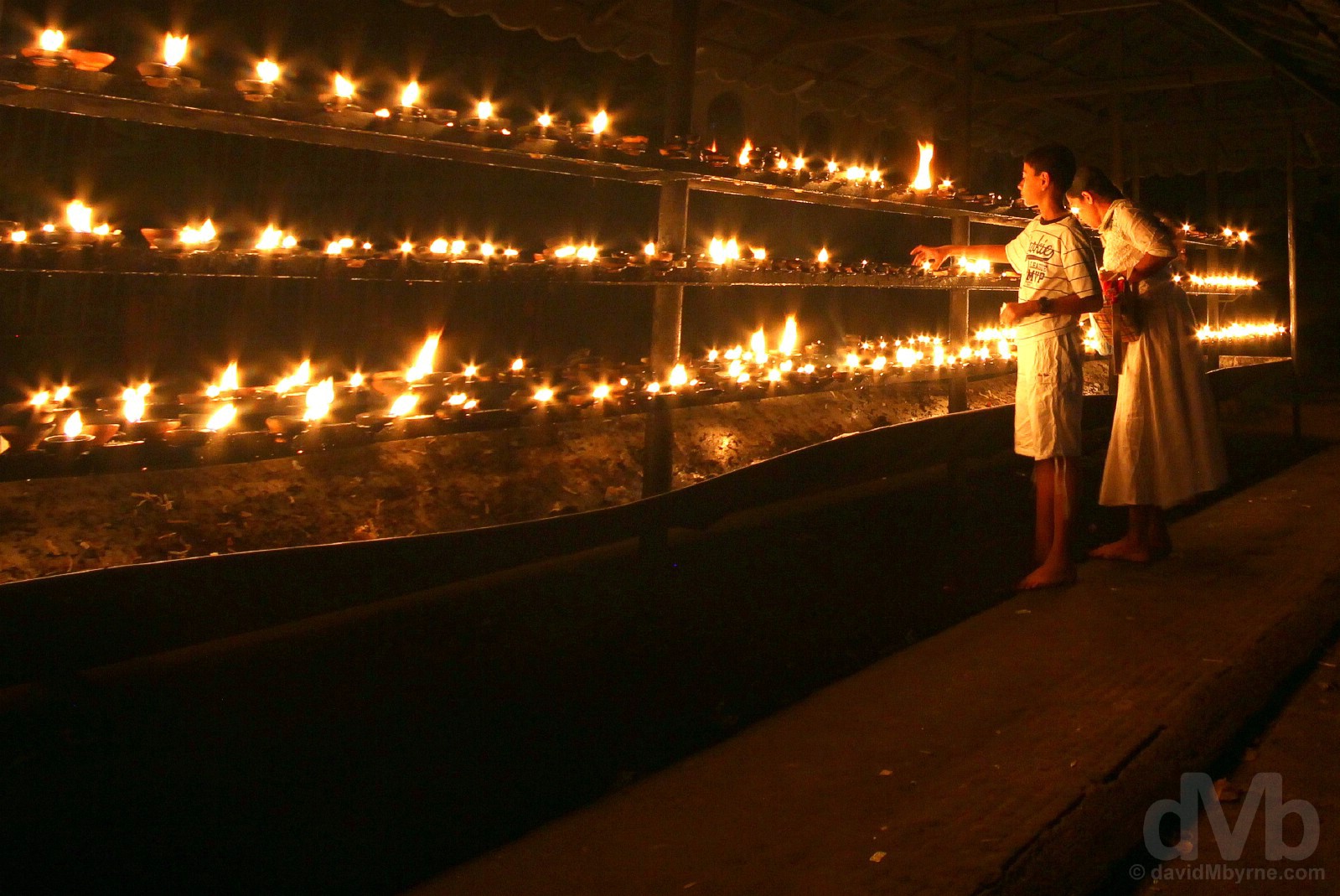 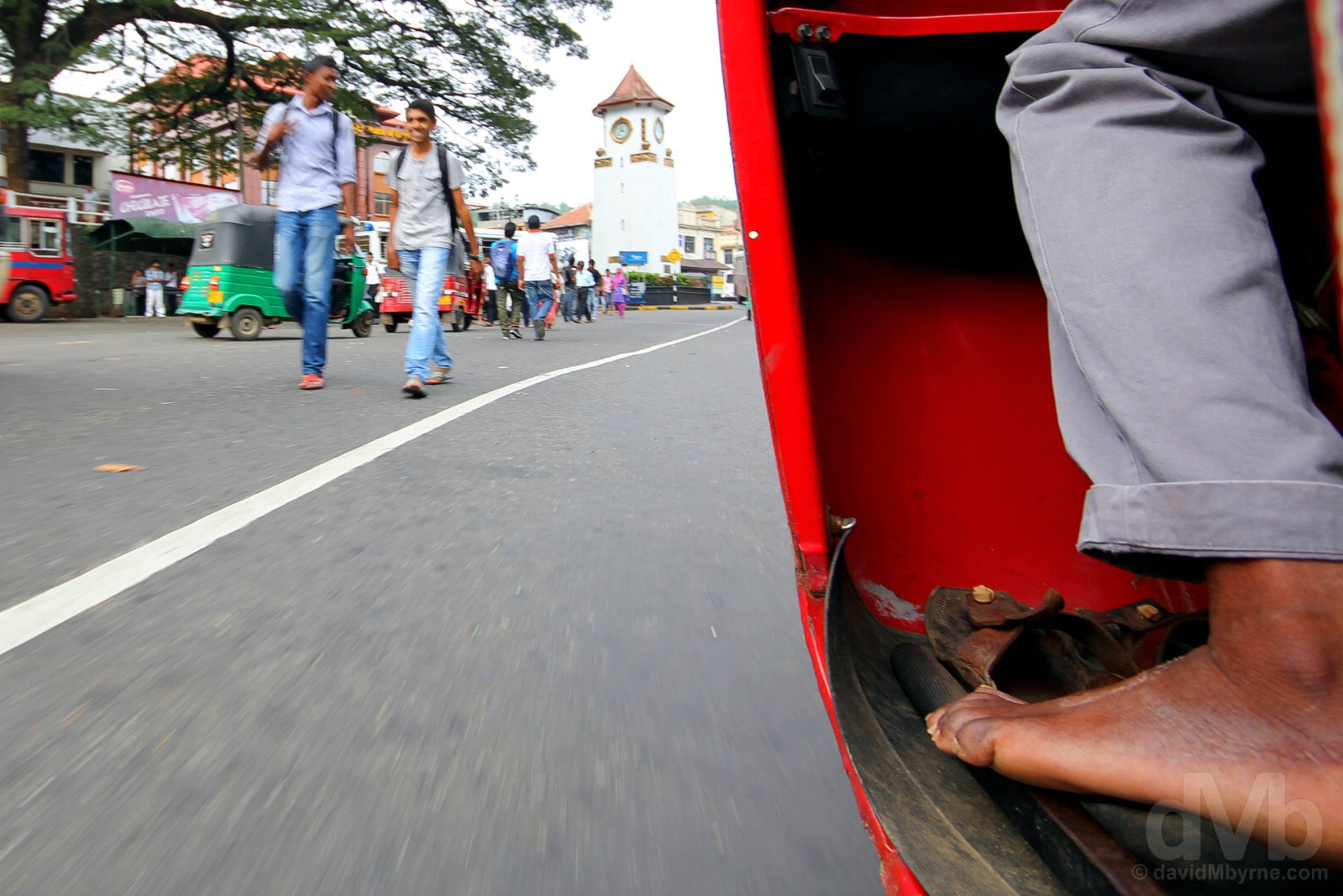 11. Riding a tuk-tuk on the streets of Kandy, central Sri Lanka. September 9, 2012 || “… the city’s landmark Clock Tower. Built between 1947 and 1950, the tower was designed by Shirley de Alwis, considered the best architect in Sri Lanka at the time, and was dedicated to the recently deceased son of its builder, Haji Mohomed.” (For more, see the posting Kandy, Sri Lanka.)

Do Yourself a Favour
Sri Lanka was a treat, its scenery amazing, its food delicious, its people some of the most genuinely warmest, welcoming I’ve yet encountered. ‘The Nation of Smiling People’ indeed. I hadn’t been to Sri Lanka before so I didn’t really know what to expect. However, it ended up being one of those very pleasant surprise locations. Given its geographical location I was expecting it to be just like India, and in many ways it is. Sri Lanka is a (slightly) cleaner, more structured, more expensive, less hyperactive version of it’s bigger & brasher Indian Subcontinent neighbour; it’s India on less steroids. Of course with 20 million people on a smallish island you’re never too far from hecticness, but hectiness here seems to move at a slower, more leisurely pace. For the most part it’s still chaotic, it’s just tolerable, bearable chaos. So do yourself a favour and pay it a visit. Just don’t forget to smile along with the locals when you do.