“The Buddha in grotto 13 is suffering from various levels of decay, as is the colourful plaster on the backing of his cave, most of which is gone… During carving, the large right arm of the Buddha needed support hence the need to carve a smaller Buddha.”

Datong, in Shanxi province, China, is a walled city situated in the far north near the border with Inner Mongolia, about 250 kilometres west of Beijing. I knew I was further north than I’d previously been in China because the temperature difference between here and Xi’an, the previous stop on my loop of the country, was striking & I found myself having to wrap up for the first time since arriving in Beijing some 6 weeks ago now. Datong itself is an industrial city, an industrial Chinese city, most of which are rather ugly affairs. Datong is no exception and might even be classed as a little less aesthetically pleasing than most. Coal is the main culprit. The city produces a whopping one-third of all of China’s coal and it – the coal – dominates the modern city; it sits in donkey carts and lorries that judder up and down the main roads; it stains the buildings black; and it swirls in the air you breathe, helping to make Datong, not surprisingly, one of China’s dirtiest and most polluted cities.

Datong itself doesn’t have any attractions of note (unless you class a huge locomotive factory as an attraction) but amid the blasted landscape of modern, industrial China that surrounds the city – a landscape of endless coal mines and dotted with power stations – where you will find some marvelous ancient sites, remnants of the city’s glory days as the capital of two Han Chinese dynasties. One of these is the awesome Buddhist Yungang Grottoes, situated some 16 kilometres outside the city.

The Yungang Grottoes
The Yungang Grottoes, a UNESCO World Heritage Site, are ancient Buddhist temple grottoes carved into the side of a sandstone cliff of the Wuzhou Shan mountains south-west of Datong in the valley of the Shi Li River. The caves are excellent examples of rock-cut architecture and are the first, grandest, and best preserved of the three major Buddhist grottoes in China, the others being The Longmen caves in Henan province and The Mogao caves in Gansu province. 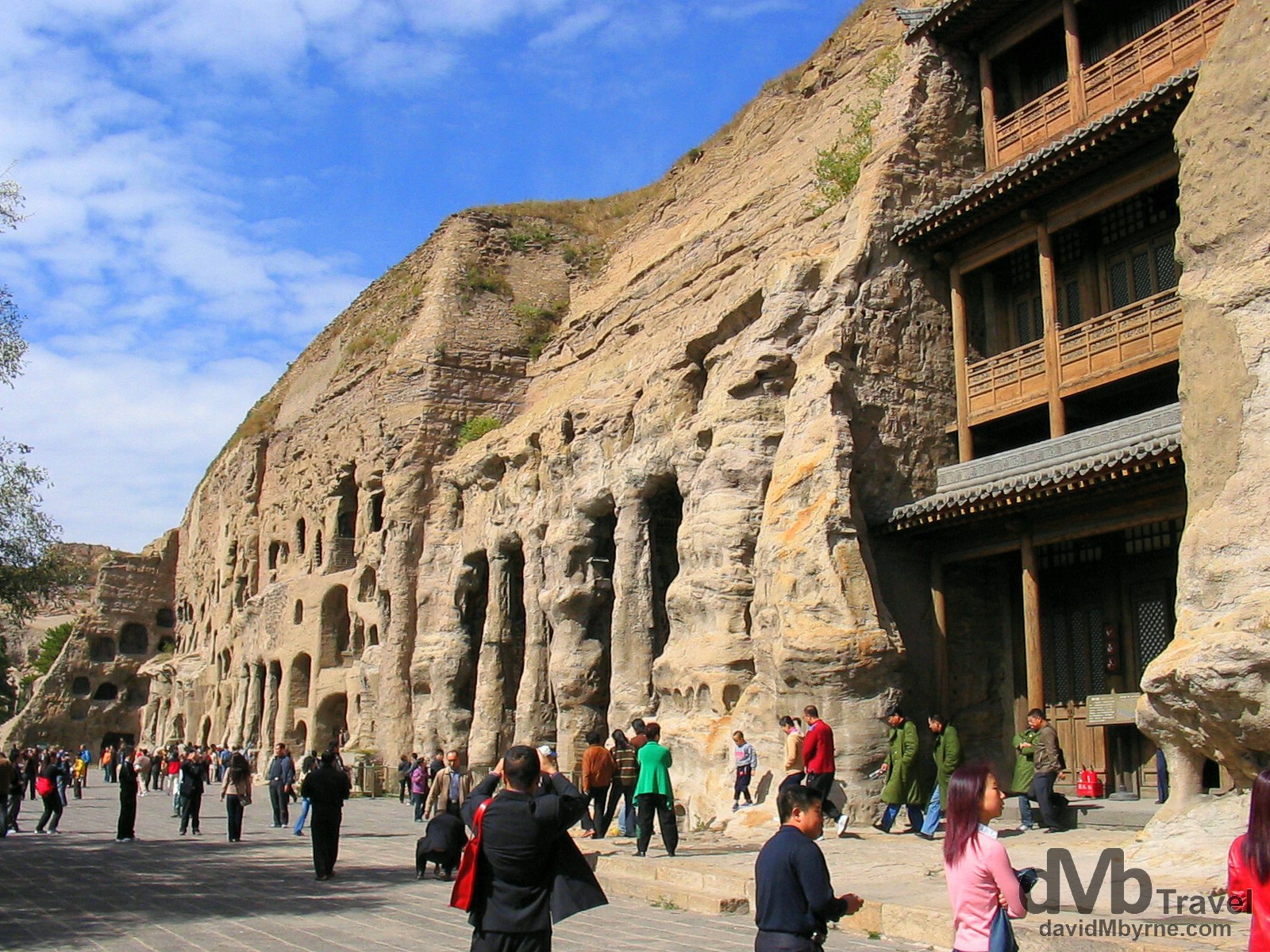 The Yungang Grottoes complex is a UNESCO World Heritage listed series of 50 ancient Buddhist temple grottoes carved into the side of a sandstone cliff. The grottoes were started in 400 AD, at the time of a Buddhist revival, with construction petering out around 525 AD. The artistry displayed in the carvings is unsurpassed in China and the labour involved is no less impressive, requiring the efforts of as many as 40,000 workmen. Most of the caves were made by first hollowing out a section at the top of the cliff, then digging into the rock, down to the ground and out, leaving two holes, one above the other. In total over 250 grottoes in 50 caves, numbered sequentially, house over 50,000 Buddha statues & statuettes across a one kilometre span of cliffs, some in better condition than others. Yungang Grottoes ( 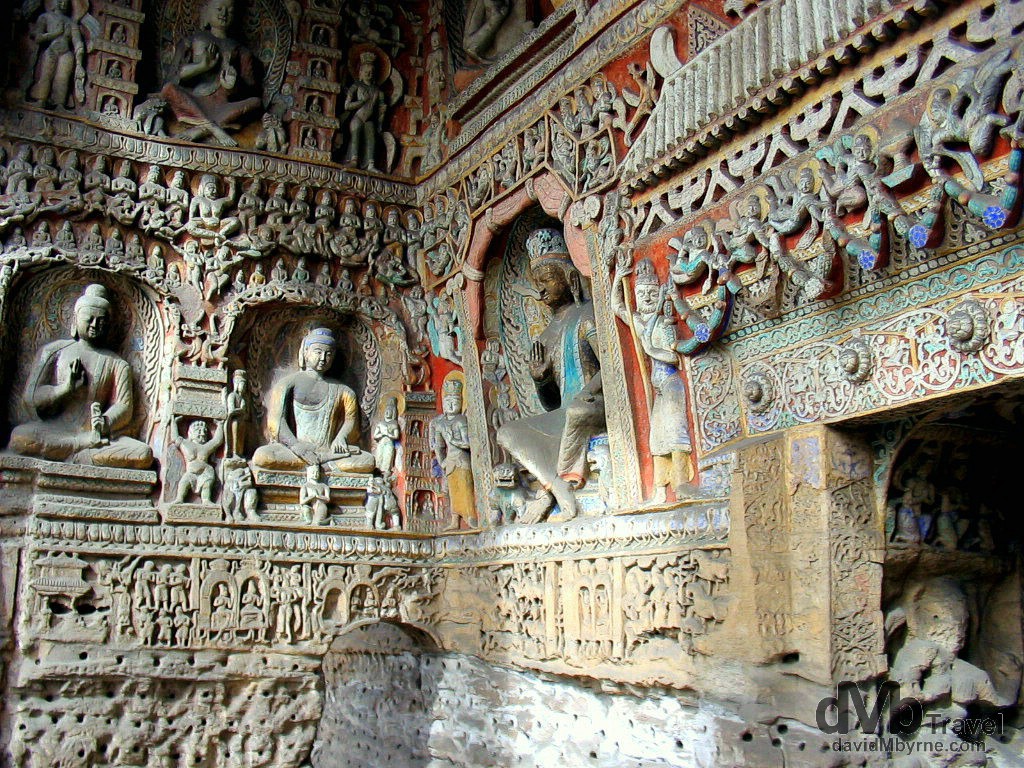 The Yungang Grottoes, in Datong city, Shanxi Province, with their 252 caves and 51,000 statues, represent the outstanding achievement of Buddhist cave art in China in the 5th and 6th centuries. The Five Caves created by Tan Yao, with their strict unity of layout and design, constitute a classical masterpiece of the first peak of Chinese Buddhist art. 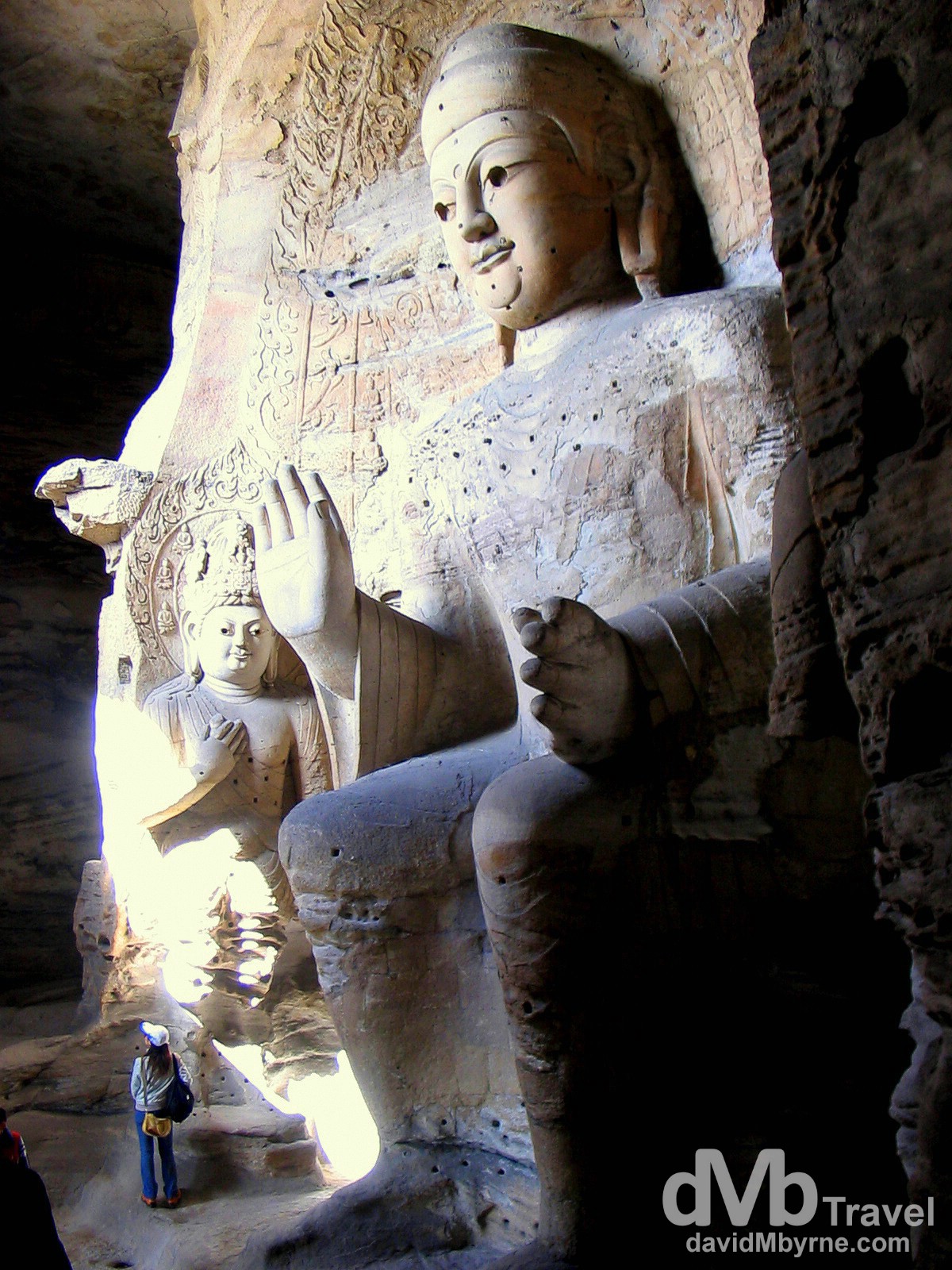 The 10-metre Buddha & Attendants, or bodhisattvas, of grotto 3. This Buddha has lost it’s colourfully painted plaster which would have been originally held in place by supports housed in the holes visible on the figure. The figure is characteristic of Northern Wei art with the folds of his garments expressed by an ordered pattern and his physiognomy and features formed by simple curves and straight lines – his huge ears almost touch his shoulders. Grotto 3 of the Yungang Grottoes on the outskirts of Datong, Shanxi Province, China. October 2, 2004. 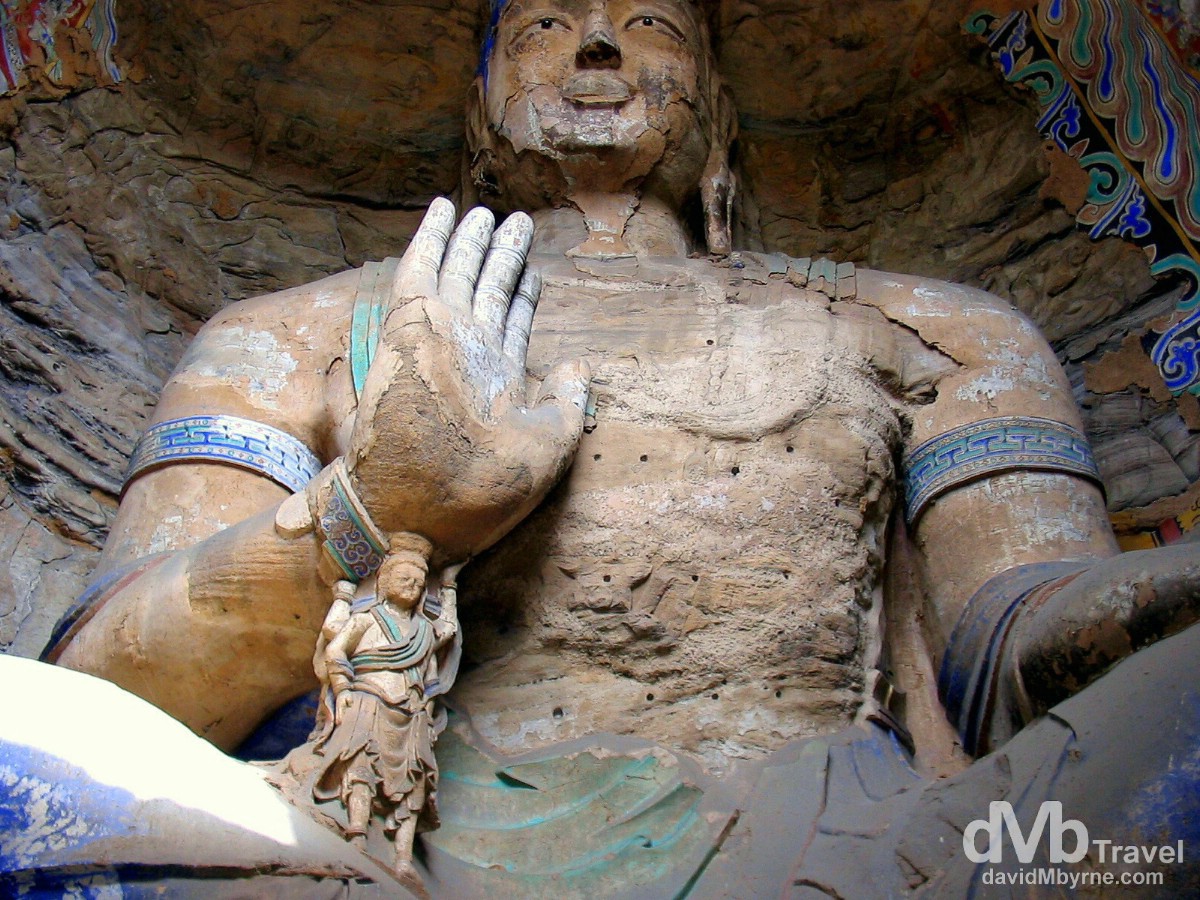 The Buddha in grotto 13 is suffering from various levels of decay, as is the colourful plaster on the backing of his cave, most of which is gone – a little to the original is visible in the top right of this image. During carving, the large right arm of the Buddha needed support hence the need to carve a smaller Buddha. Grotto 13 of the Yungang Grottoes on the outskirts of Datong, Shanxi province, China. October 2, 2004.

Moving On
Nearby is the amazing The Hanging Temple of Heng Shan.

In Context || Part of #China2004
This posting was filed as part of a 13-stop, 6-week loop of the country, a first visit to China. All posts from that trip can be viewed here.