The Chinese city of Xi’an, the capital of China’s Shaanxi province & one of China’s 4 historical & ancient capitals, is a nice enough city to visit (for a Chinese city). The historic City Walls, the central Bell Tower & the Muslim Quarter are all worth a look. That said, the city is world renowned for one attraction in particular, an attraction that isn’t even in the city itself but some 35 kilometres from it – The Terracotta Army/Warriors, one of China’s biggest draws, a famous UNESCO World Heritage listed attraction that was the reason that saw me visiting the city.

Vault 1 of the Terracotta Army (

Rather surprisingly, I had received a lot of negative Terracotta Army feedback from fellow travellers prior to arriving in the city. The words ‘disappointment’ & ‘overrated’ were bandied about quite a bit, as were the words ‘boring’ & ‘avoid’. I’m glad I didn’t avoid them as I found the Terracotta Army anything but boring. In fact, I found them fascinating.

Terracotta Army || Standing to Order for Over 2,200 Years

No records exist, or at least none has yet been found, of the warriors which were only discovered in 1974 by locals sinking a well. They are 2,200 years old and were built during the Qin Dynasty to guard the tomb of China’s first Emperor, the aforementioned Qin Shi Hunag who ruled from 247-210 BC, & from 221-210 BC over a unified China. It is believed construction of his tomb, and the Terracotta Army guarding it, began in 246 BC and took 700,000 workers & craftsmen from all over China 36 years to complete. According to historians, Qin Shi Hunag was interred inside a 51 metre-high tomb complex alongside great amounts of treasure and objects of craftsmanship, as well as a scale replica of the universe complete with gemmed ceilings representing the cosmos and flowing mercury representing the great earthly bodies of water. Although the tomb complex itself has not yet been excavated, the three vaults – Vaults 1, 2 & 3 – that have been partly unearthed to date are estimated to house some 15,000 terracotta soldier figurines in battle formation, as well as horses, bronze chariots, & weapons. Built never to be seen, today it is one of the most viewed attractions in China, not to mention one of the best.

No doubt thousands of statues still remain to be unearthed at this archaeological site, which was not discovered until 1974. Qin (d. 210 B.C.), the first unifier of China, is buried, surrounded by the famous terracotta warriors, at the centre of a complex designed to mirror the urban plan of the capital, Xianyan. The small figures are all different; with their horses, chariots and weapons, they are masterpieces of realism and also of great historical interest.

– UNESCO commenting on the Mausoleum of the First Qin Emperor 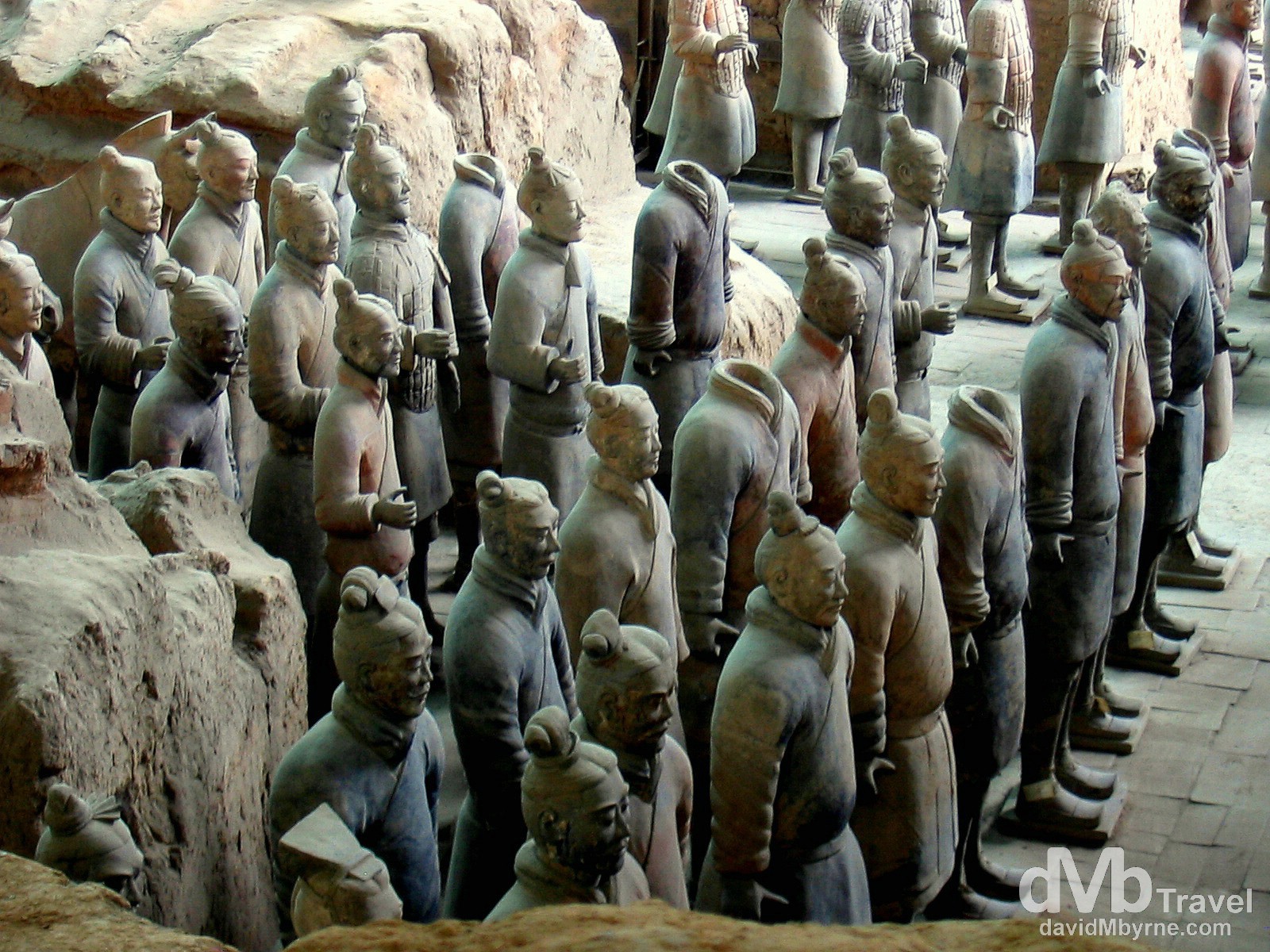 Averaging 1.8 metres in height, the Terracotta Army figurines are hollow from the thighs up. The head & hands, all individual, were modelled separately & attached to the mass-produced bodies. Eternally serving to protect their leader, each of the soldiers has different features and expressions and was found wearing marks of rank and various types of real battle armour – some suggest each are a portrait of the real Imperial Guard of the time. They were originally brightly painted, paint that has long since faded, and even carried real weapons made of sophisticated alloys that were still sharp when discovered; some of the arrowheads even contained lead to make them poisonous. Also, the swords were even chromium plated, a method of metal preservation patented in Germany in the 1930s and in the U.S. in the 1950s, quite extraordinary considering these figures date to 200 BC. Vault 1 of the Terracotta Army on the outskirts of Xi’an, Shaanxi Province, China. September 30, 2004. 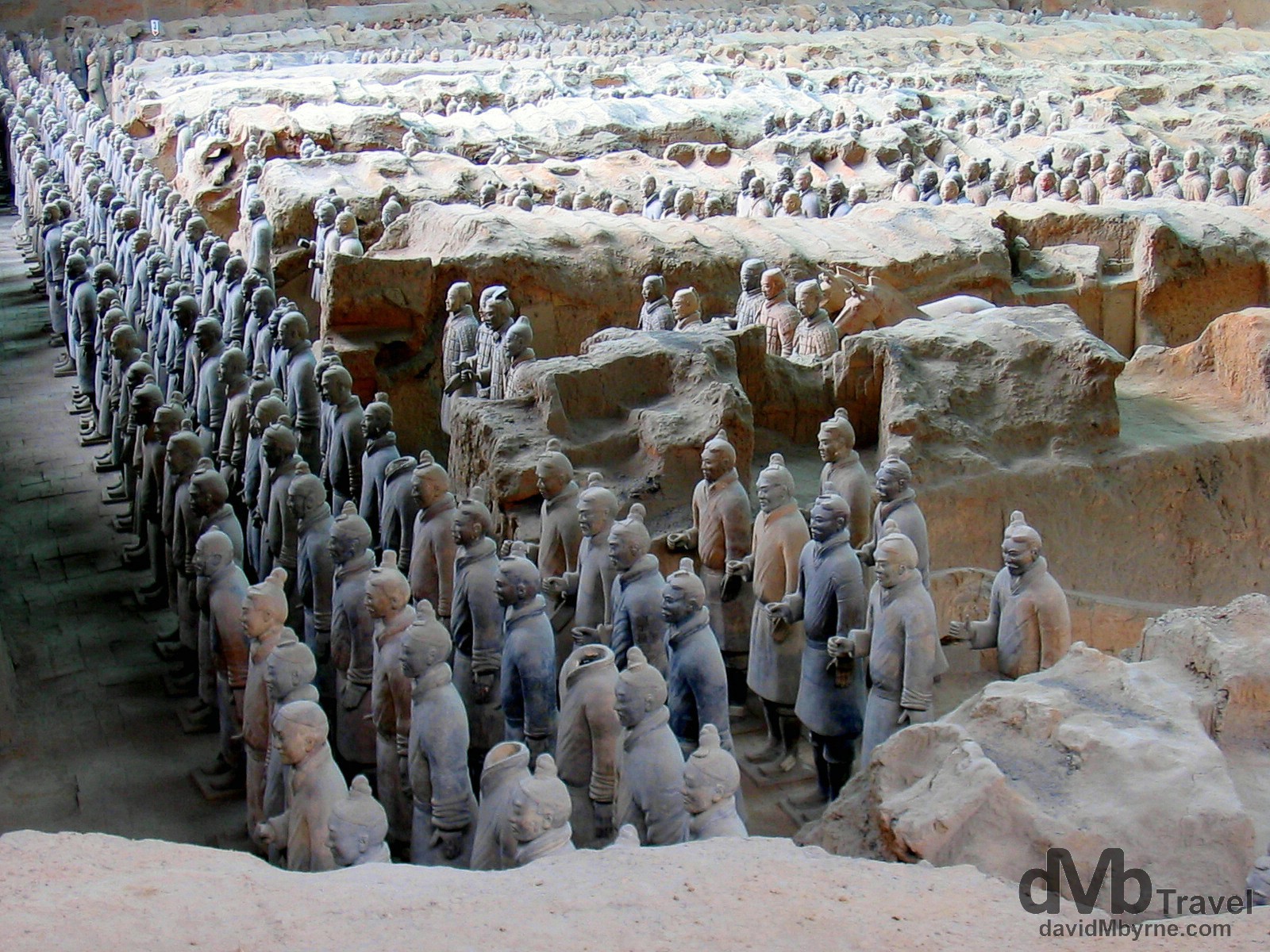 After completion, the terracotta figures were placed in subterranean pits in precise military formation according to rank and duty. The pits were protected by simple wooden structures, none of which survived to this day. There is also evidence of fire and looting having caused the pits damage, leading to destruction of the warriors themselves. Vault 1 of the Terracotta Warriors, Outside Xi’an, Shaanxi Province, China. September 30, 2004. 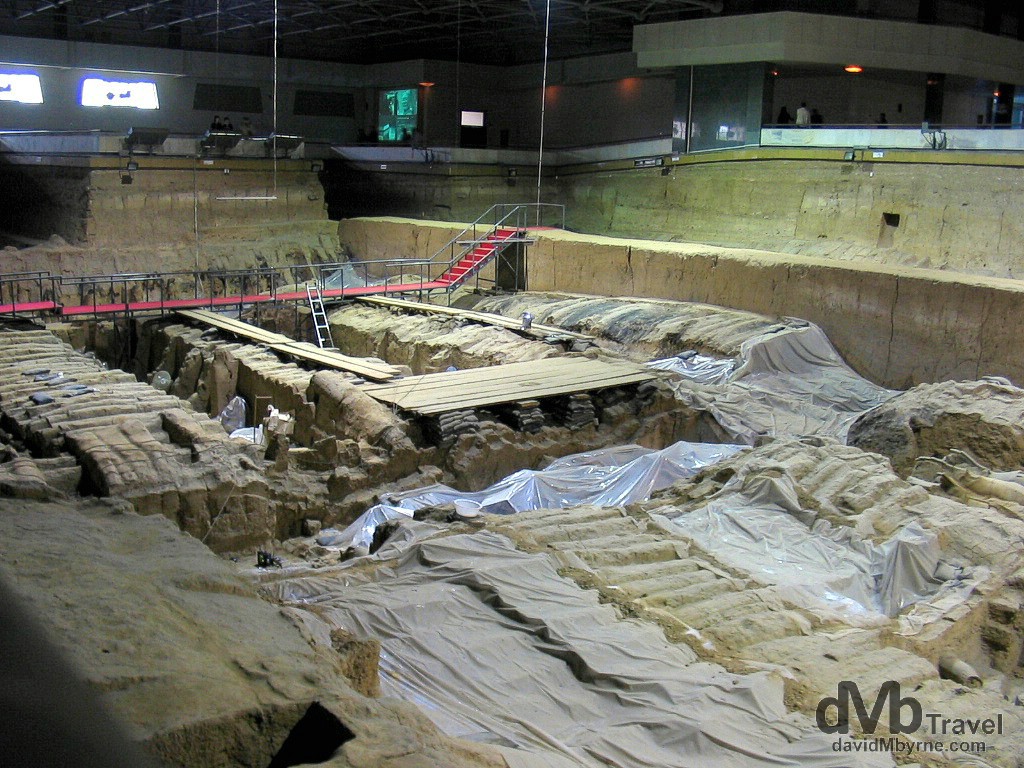 Vault 2 is an archaeologist Nirvana and the scene of the most intense excavation work. There isn’t much to see here except collapsed pits, scaffolding and the odd archaeologist here and there scrapping away at the rock. Vault 2 of the Terracotta Army on the outskirts of Xi’an, Shaanxi Province, China. September 30, 2004 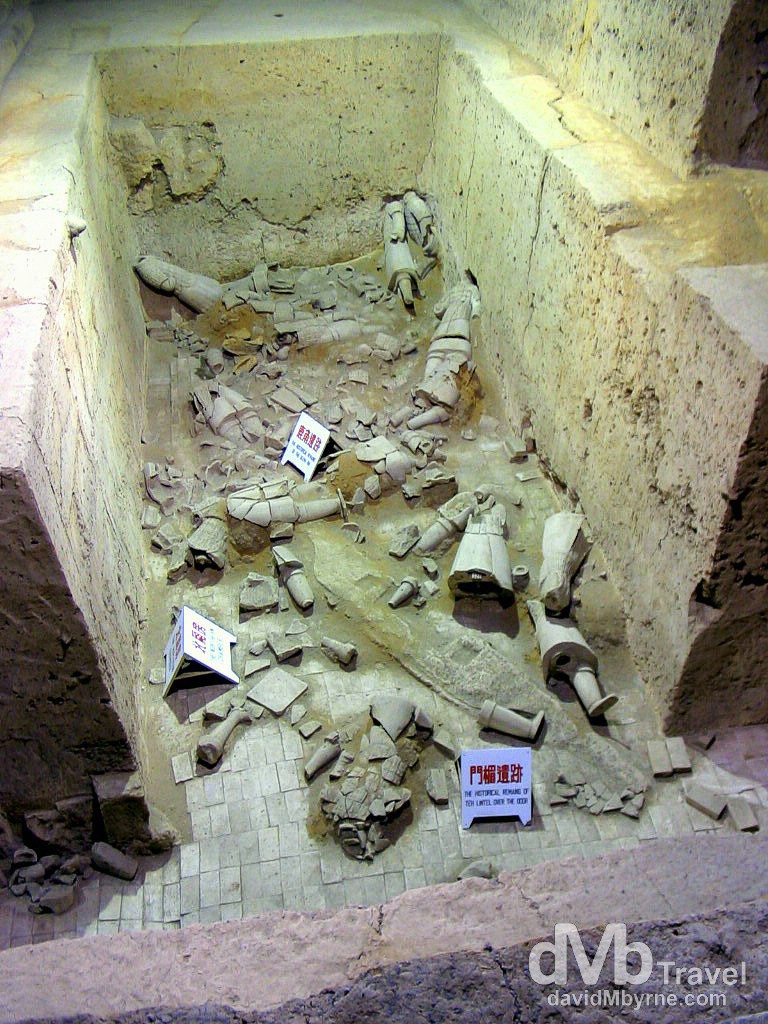 Vault 3 is the smallest of the three Terracotta Army vaults. Most of the figures found in here had dress that distinguished them as higher ranking officers leading to the speculation that this was some sort of command or control centre for the army of soldiers housed in Vaults 1 & 2. Much of the remains of the Terracotta Army still survive to this day in various stages of preservation, surrounded by remnants of the decayed wooden structures that they were originally housed in. As is evident by this picture, not all figurines housed in Vault 3 coped very well with being 2,200+ years old. The sign near the front of the pictures reads ‘The Historical Remains of the Lintel above the door’. Despite areas like this the existence of the Terracotta Army serves as a testament to the amount of labour and skill involved in its construction. It is also proof of the incredible amount of power China’s first Emperor, Qin Shi Hunag, possessed to order such a monumental undertaking as the Terracotta Army required. Vault 3 of the Terracotta Army on the outskirts of Xi’an, Shaanxi Province, China. September 30, 2004

The Museum of The Terracotta Army 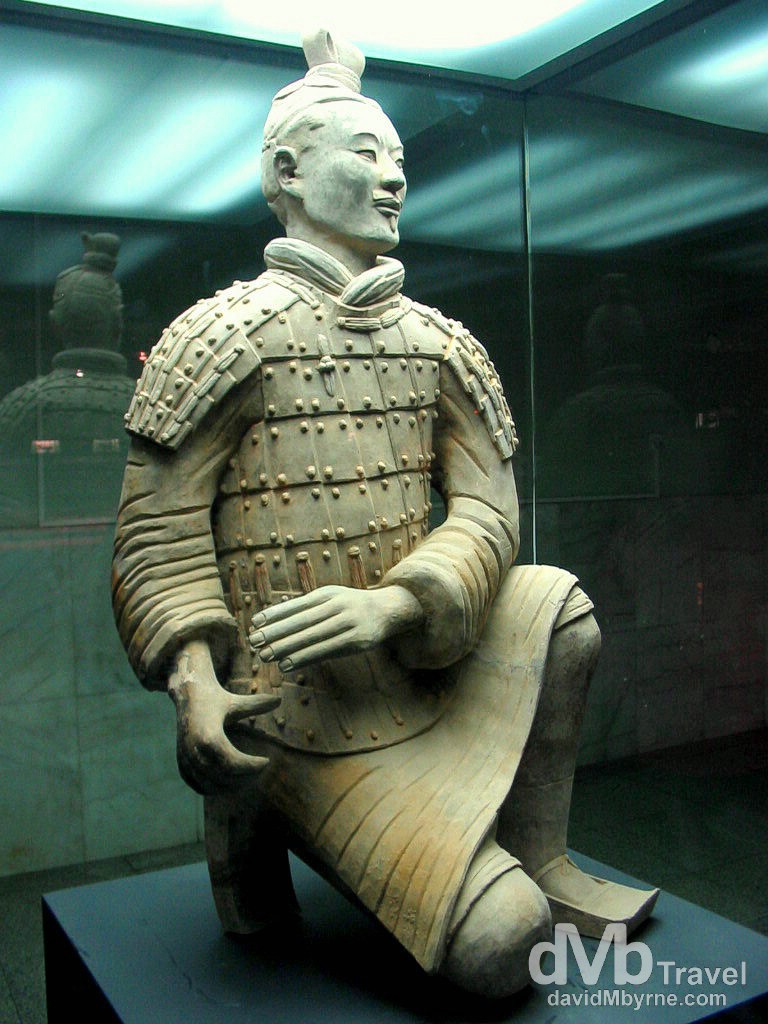 Moving On
From Xian it was north to Datong in Shanxi Province, on the outskirts of which you’ll find the fascinating Hanging Temple of Heng Shan and the equally fascinating UNESCO-listed Yungang Grottoes.

Subsequent Years Of China Travel
More of a subsequent, 2008 visit to Xian & the Terracotta Army. Plus, lots more from subsequent visits to China over the years.