“I’ve wanted to visit China for some time, lured by its history, its iconic sights and its reputation as a difficult, closed location for foreigners. I’ve yet to see outside the capital, but that’ll be changing soon.”

I’m approaching the end of a 5-day stint in Beijing, China, my first trip to the country. I’ve wanted to visit China for some time, lured by its history, its iconic sights, and its reputation as a difficult, closed location for foreigners. I’ve yet to see outside the capital, but that’ll be changing soon. Tomorrow actually, when I’ll embark on a crude 6-week clockwise loop of the country – I’ll be going down the East Coast as far as Hong Kong & Macau before heading north up through the middle of the country and swinging back to Beijing, all overland. But first things first – the capital.

Beijing is one of the biggest & most historic cities in the world with a history that dates back three millennia. Widely regarded as the political, educational, and cultural centre of the country, the city, second only in population to Shanghai, is renowned for its opulent palaces, temples, gardens, tombs, walls and gates. 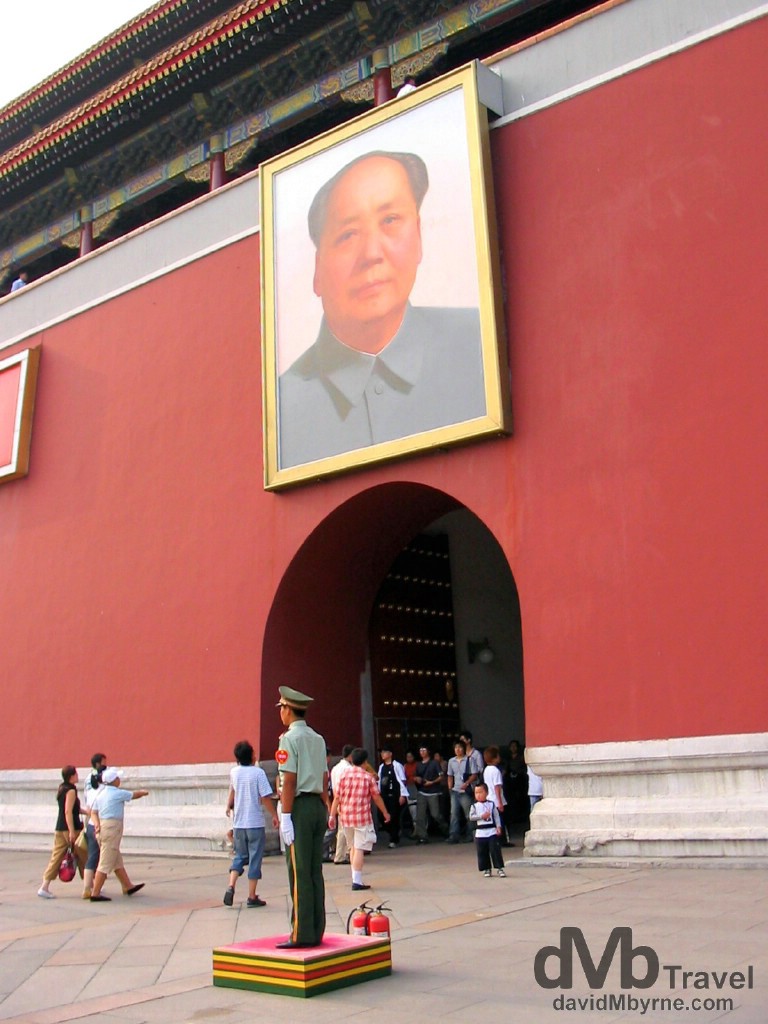 Tiananmen Gate, one of the symbols of China. First built in 1420, the gate is 66 metres long, 37 metres wide and 32 metres high. It serves as the entrance to the Imperial City, the location for Beijing’s famous Forbidden City, a.k.a. The Palace Museum, itself home for almost 500 years to successive Chinese emperors and their households as well as being the ceremonial and political centre of Chinese government. It was from Tiananmen Gate, on October 1, 1949, that Chairman Mao, the leader and co-founder of the Chinese Communist Party & whose massive portrait famously hangs from the gate, delivered his liberation speech declaring that “the Chinese people have now stood up”. Mao was addressing his subjects situated in Tiananmen Square, the famous square of the same name that the gate overlooks. One of the largest public squares in the world, it is infamous as the site of many mass movements, most famously in 1989 when students and workers, peacefully protesting for democracy and against corruption & oppression, were savagely suppressed. Beijing (

Chairman Mao || The Good & The Bad
Regarded as one of the most important figures in modern world history, Mao is still a controversial figure today, over thirty years since his death in 1976 . He is still held in high regard in China (though serious, critical examination of his role in history is not allowed here), where he is often portrayed as a great revolutionary leader and a military and political genius who led China through the War of Resistance and the Civil War, and transformed the country into a major power through his Maoist social and economic reforms. No mention then of his many disastrous policies, such as the ‘Great Leap Forward’ and the ‘Cultural Revolution’, both of which are blamed for causing severe damage to the culture, society, economy and foreign relations of China, as well as enormous and unnecessary loss of life – estimates range from 40 to 72 million, leading some critics to class Mao as the most prolific mass killer in recorded history. Like the other communist heavy hitters of the day, Lenin in Russia and Ho Chi Minh in Vietnam, an over-the-top mausoleum was erected after Mao’s death by the people he ruthlessly oppressed. It is situated in Tiananmen Square and I, like all good tourists and adoring Chinese alike, visited to emm, pay my respects. It was such a surreal experience joining the hordes of Chinese filing past the Great Leaders wax-like body. 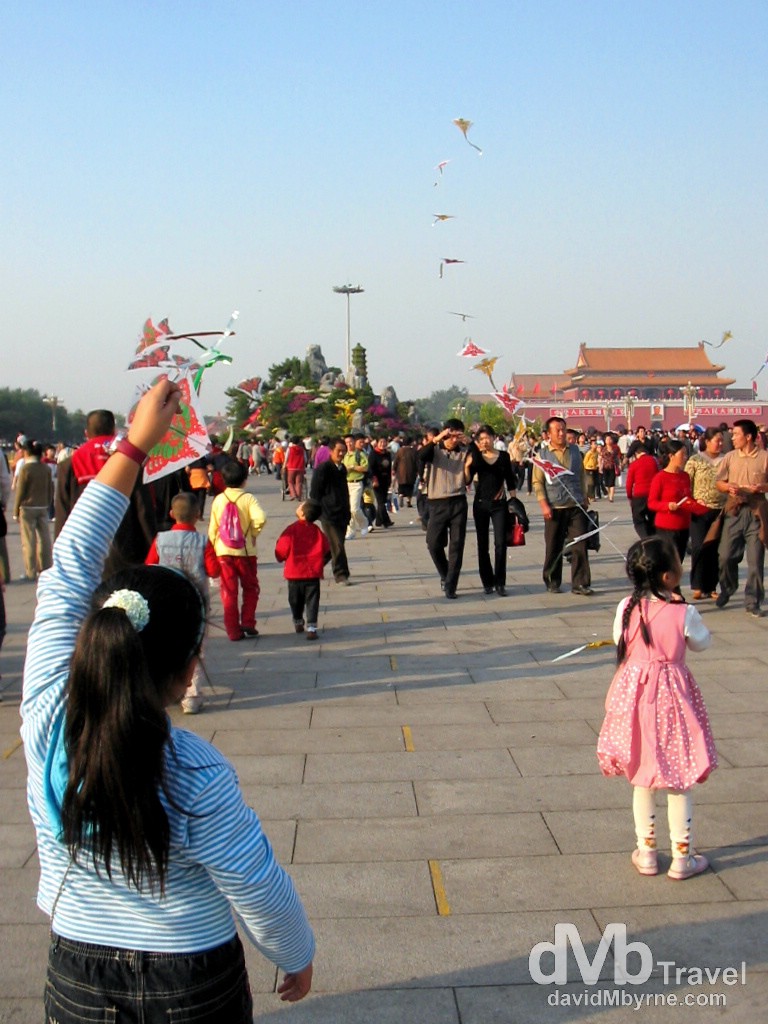 Flying kites in Tiananmen Square during National Day Golden Week celebrations. This picture was captured on my return to Beijing having completed a 6-week tour/loop of the country. It was good to be back in the city (familiarity brings with it comfort) and my timing couldn’t have been much better – the city was in the midst of celebrating National Day, the anniversary of the October 1, 1949 founding of The People’s Republic of China following years of Civil War. Shortly after the country’s founding (on December 2nd, 1949) the Central Peoples Government declared that October 1st would be National Day, with the day itself marking the beginning of one of Chinas 3 Golden Weeks of celebration (the others being Labour Day, beginning on May 1st, and the most famous of them all, Chinese Lunar New Year, which falls in late January of early February). Beijing, China. October 3, 2004.

China is a big country, inhabited by many Chinese.

China
Everything about China is big: it is the third largest country in world and it has a population of over 1.31 billion people, making it the world’s most populous country. The People’s Republic of China, as the country is officially known, has been led by the Communist Party of China (CPC) since the state’s establishment in 1949, following the victory of the Mao Zedong lead Communist Party over the Kuomintang in the Chinese Civil War (the Kuomintang retreated to Taiwan where they remain today). Considered by commentators as an emerging superpower, it is the world’s fourth largest economy and despite market-based economic reforms that have, since 1978, helped lift about 400 million people out of poverty, China is now faced with a number of other economic problems, including a rapidly ageing population and an increasing rural-urban income gap. 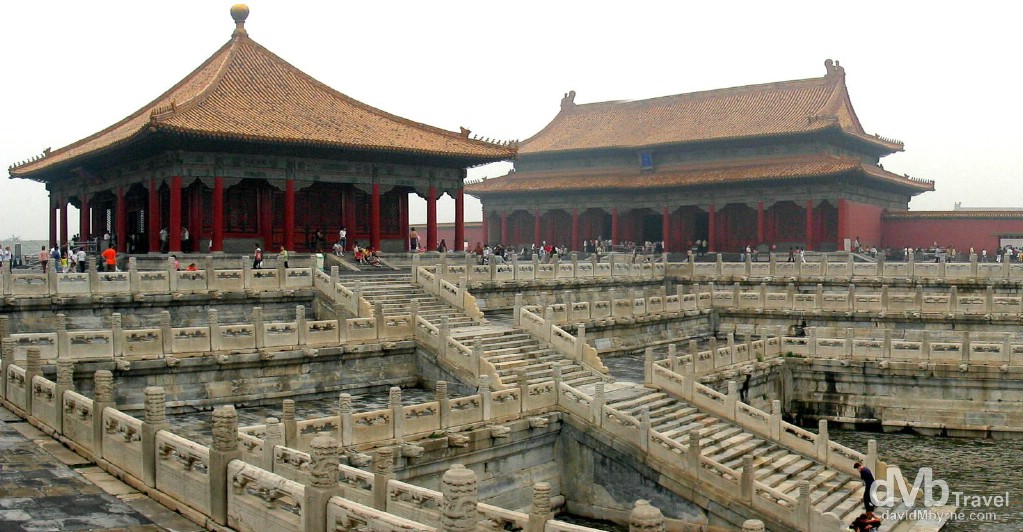 Buildings in the Forbidden City, renamed The Palace Museum. Located in the middle of Beijing, The Forbidden City was built between 1406 and 1420 and it was the Chinese Imperial palace from the mid-Ming Dynasty (1368 – 1644) to the end of the Qing Dynasty (1644 – 1911). It’s a vast complex consisting of 800 buildings housing over 8,800 rooms and covering an area of over 7 km². It was declared a World Heritage Site in 1987 and is listed by UNESCO as the largest collection of preserved ancient wooden structures in the world. It was called the Forbidden City because it was forbidden for the average citizen to even approach the walls of the city in the days of the various dynasties. No such issues these days as anyone can wander around taking in its grandeur. The Forbidden City/The Palace Museum, Beijing, China. August 25, 2004.

Seat of supreme power for over five centuries (1416-1911), the Forbidden City in Beijing, with its landscaped gardens and many buildings (whose nearly 10,000 rooms contain furniture and works of art), constitutes a priceless testimony to Chinese civilization during the Ming and Qing dynasties. The Imperial Palace of the Qing Dynasty in Shenyang consists of 114 buildings constructed between 1625–26 and 1783. It contains an important library and testifies to the foundation of the last dynasty that ruled China, before it expanded its power to the centre of the country and moved the capital to Beijing. This palace then became auxiliary to the Imperial Palace in Beijing. This remarkable architectural edifice offers important historical testimony to the history of the Qing Dynasty and to the cultural traditions of the Manchu and other tribes in the north of China. 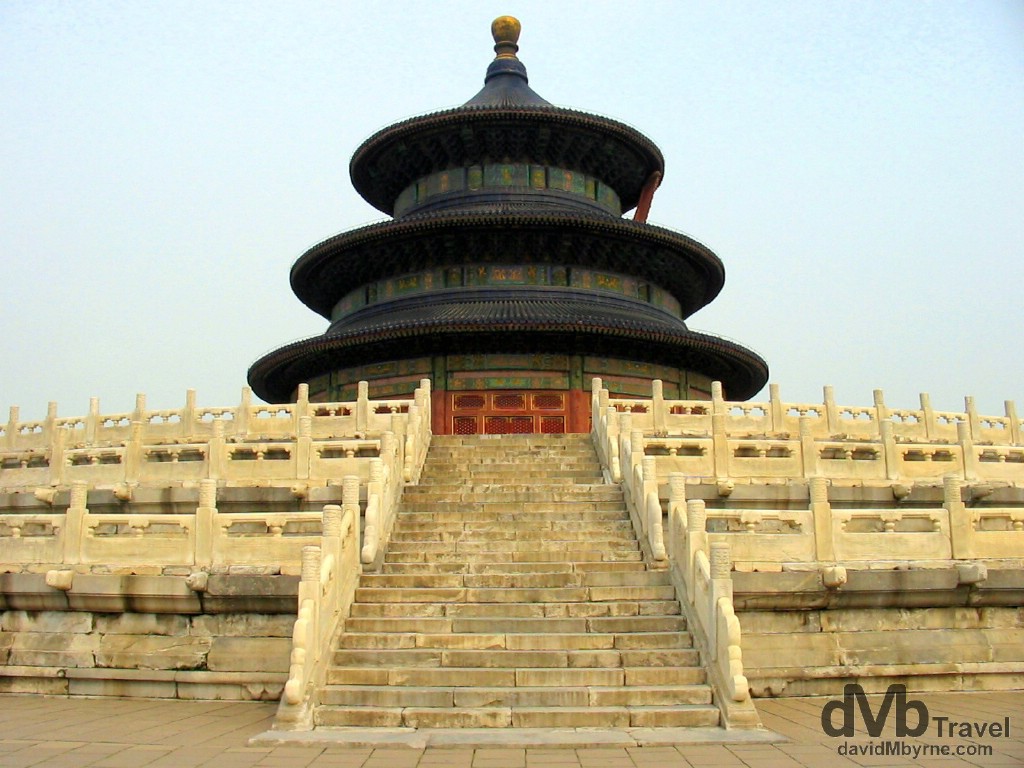 The stunning Hall of Prayer for Good Harvests, the main structure in the Temple of Heaven complex, a complex of religious buildings set in an expansive, 660-acre wooded park. I’ve been fortunate enough to visit many temples in various parts of Asia but the colours in this temple, built in the traditional Chinese style of not using any nails, are amazing (the overcast conditions prevent the photo from showing the true colours). This is where the Emperor would come to fast and pray, mainly, for a good harvest from the forthcoming year’s crop. It has not been used as such since 1911, the last year China was under dynastic rule, and today is one of the must-see sights in the city. The magnificent triple-gabled circular building seen here, measuring 36 meters in diameter, 38 meters high, & resting on a three-level marble base, is a reconstruction of the original temple which was destroyed by lightning-induced fire in 1889. Beijing, China. August 24, 2004.

Making Way For the New Beijing
Beijing is undergoing some pretty radical changes ahead of the 2008 Olympic Games which are to be staged there. The whole city is being modernised to put on display to the world as the New China. Even now, 4 years ahead of the opening ceremony, the work on the ground, from workers rebuilding paths to old buildings getting demolished, is clear to see. The work goes on unabated, 24 hours a day – there was an ungodly racket outside my hotel room window from very early in the morning as even the bank next door was getting a renovation. 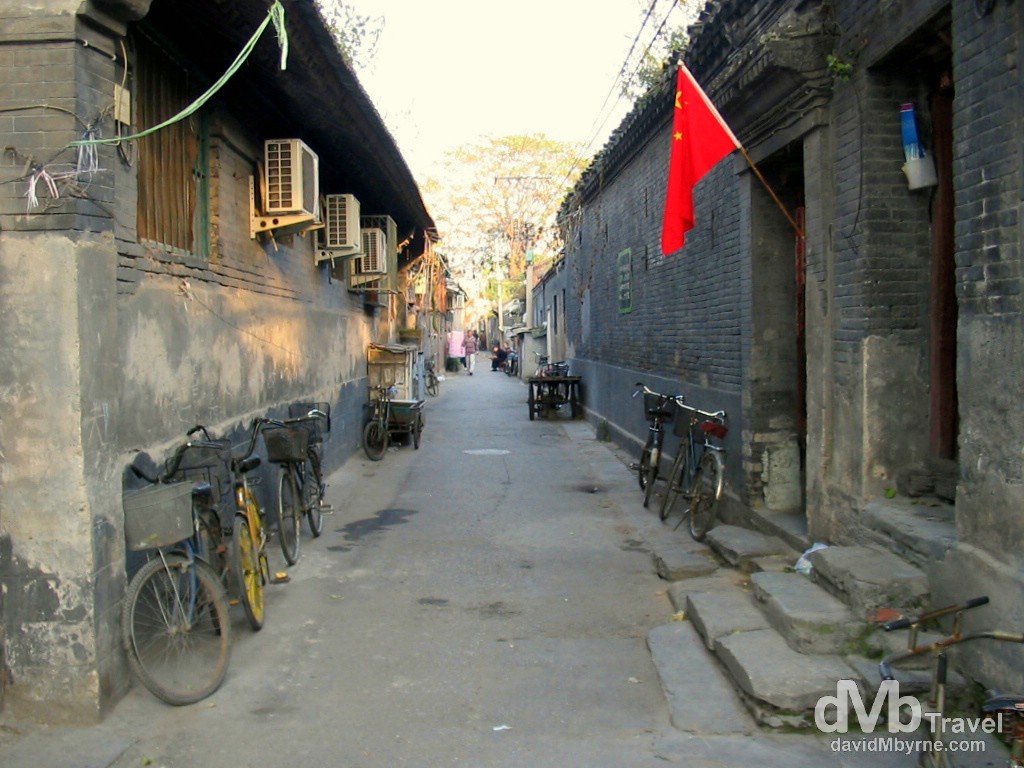 A Chinese flag hanging in one of the remaining hutongs in the Qianmen district of Beijing. Hutongs are narrow, residential lanes found all over the city. Although they are a great place to explore (getting lost is expected and all part of the fun) and offer many great photo opportunities, they are synonymous with poverty, bad plumbing and decay and thus have no place in a modern Beijing, the face of the new China & the capital of the world’s next superpower. As a result vast areas of hutongs are being destroyed in the push to modernise, particularly ahead of the 2008 Olympic Games. A traditional Beijing hutong – catch one while you still can. Qianmen, Beijing, China. October 3, 2004.

He who has not climbed the Great Wall is not a true man. 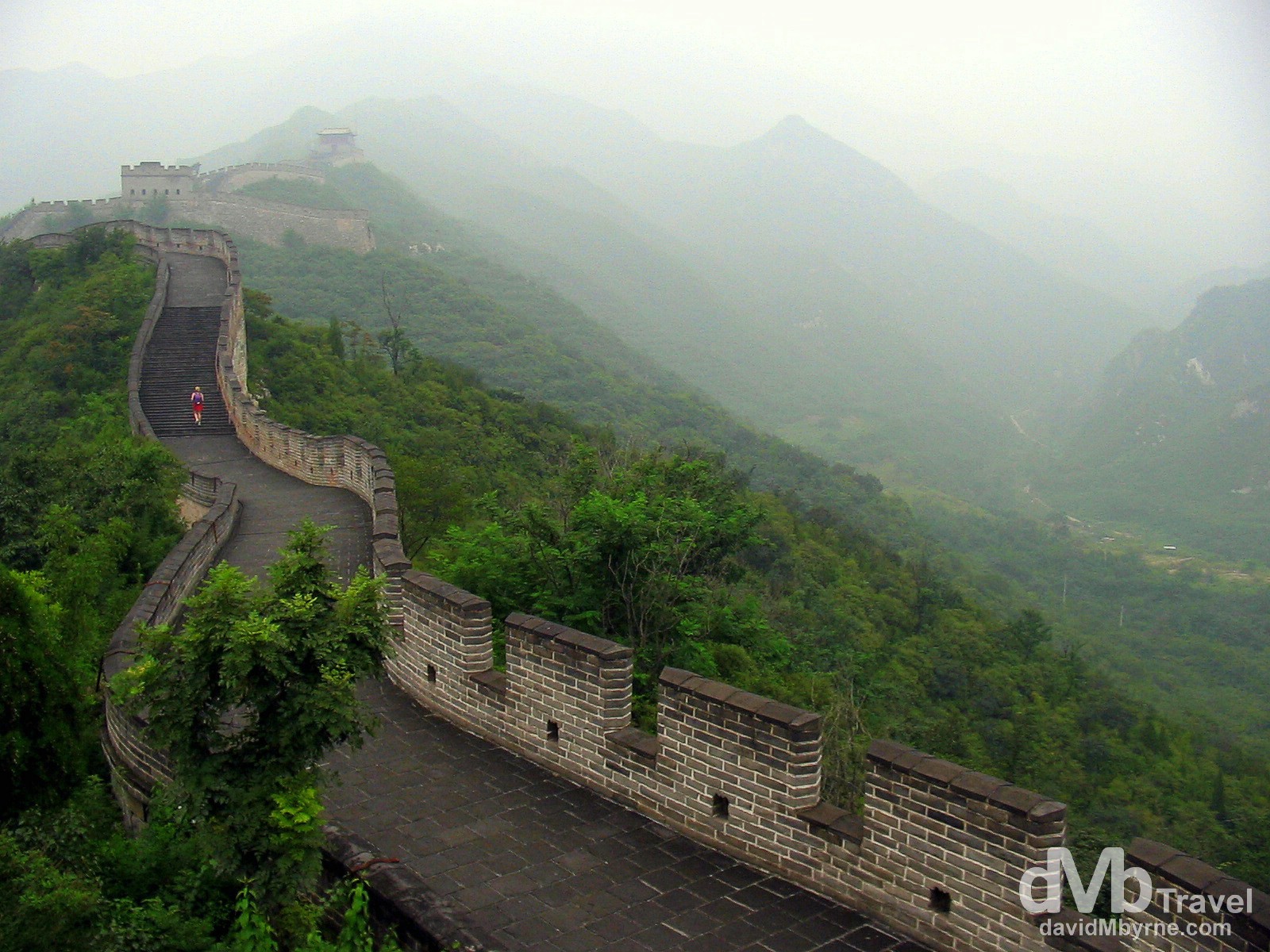 A lone figure walking on a section of the Great Wall. Badaling (

), China. August 26, 2004. (More pictures from this and sebsequent visits to other parts of The Great Wall)

What a great wall.

– Former US President Richard Nixon upon seeing the Great Wall for the first time during a visit in 1972.

I left Beijing for a day to visit a (very touristy) section of the famous Great Wall, a series of stone and earthen fortifications built, rebuilt, and maintained during the rule of successive dynasties between the 5th century BC and the 16th century. The structure was built to protect the northern borders of China, mainly from the Northern Moguls, but as barriers go it was quite poor and could easily be penetrated at weaker sections. Several walls, all collectively referred to as the Great Wall of China, were built since the 5th century BC, the most famous being the one built between 220 BC and 200 BC by the first Emperor of China, Qin Shi Huang. Little of that wall, built much further north than the current wall, remains today. The Great Wall of China, a UNESCO-listed World Heritage Site, is one of the existing mega structures and the world’s longest human-made structure, stretching over approximately 6,400 km (4,000 miles). It is also, and not surprisingly, the largest human-made structure ever built in terms of surface area and mass.

In c. 220 B.C., under Qin Shi Huang, sections of earlier fortifications were joined together to form a united defence system against invasions from the north. Construction continued up to the Ming dynasty (1368–1644), when the Great Wall became the world’s largest military structure. Its historic and strategic importance is matched only by its architectural significance.

– UNESCO commenting on The Great Wall

Moving On
In a few hours I board the overnight train from Beijing to Shanghai armed with my guidebook, my Mandarin phrasebook and trepidation about what lies ahead. Tons of trepidation. There’s a big country out there. A very big country.

In Context || Part of #China2004
This first visit to Beijing was stop one of a 13-stop, 6-week loop of the country, a first visit to China. All posts from that trip can be viewed here.

Subsequent Years Of China Travel
Lots more from many subsequent visits to Beijing over the years. China, too.