“I found myself alone on the concourse of a massive train station, in a strange city, with hundreds of people going this way and that and I had no desire to move. I was, if I’m being honest, a tad scared.”

I arrived in Shanghai off the overnight sleeper train from Beijing well rested. Make no mistake, the 2-up-2-down Soft Sleeper class on a Chinese train is a nice Riding The Rails experience. But once I arrived in the city’s train station I was faced with a bit of dilemma, and that was what to do next. I found myself alone on the concourse of a massive train station, in a strange city, with hundreds of people going this way and that and I had no desire to move. I was, if I’m being honest, a tad scared. I realised I was, & for the first time, travelling on my own and I didn’t want to do anything but sit on my bags and watch the world go by – that was less daunting a task than dealing with Shanghai. So I sat there until such a time as I realised I couldn’t sit there forever. Knowing what hotel I was going to stay at helped so I eventually drummed up the courage to approach a taxi, show him the Chinese script of the hotel name and we were off. Just like that. Easy. Nothing to it.

Shanghai
Shanghai is the largest city in China & while Beijing may be the political, educational, and cultural centre of the country, it is here in Shanghai (and Hong Kong, my next stop), where all the money is made. But it wasn’t always like this. As recently as 1842 Shanghai would have passed for a sleepy fishing town. It was then that the British opened their first trading concession, realising the value of its position as the gateway to the Yangtze River. Others soon followed (the French, the Japanese) looking for their cut of the spoils & by the 1930s the city was the largest commercial centre in the Far East – at one point Shanghai was the third largest financial centre in the world, behind only New York City and London. It languished after the Communist takeover of 1949 (which is ironic considering the movement started here in the city) but today, thanks to a 1992 market-economic redevelopment, it is once again driving the Chinese economy, evident by the legions of futuristic looking skyscrapers dotting the cityscape. 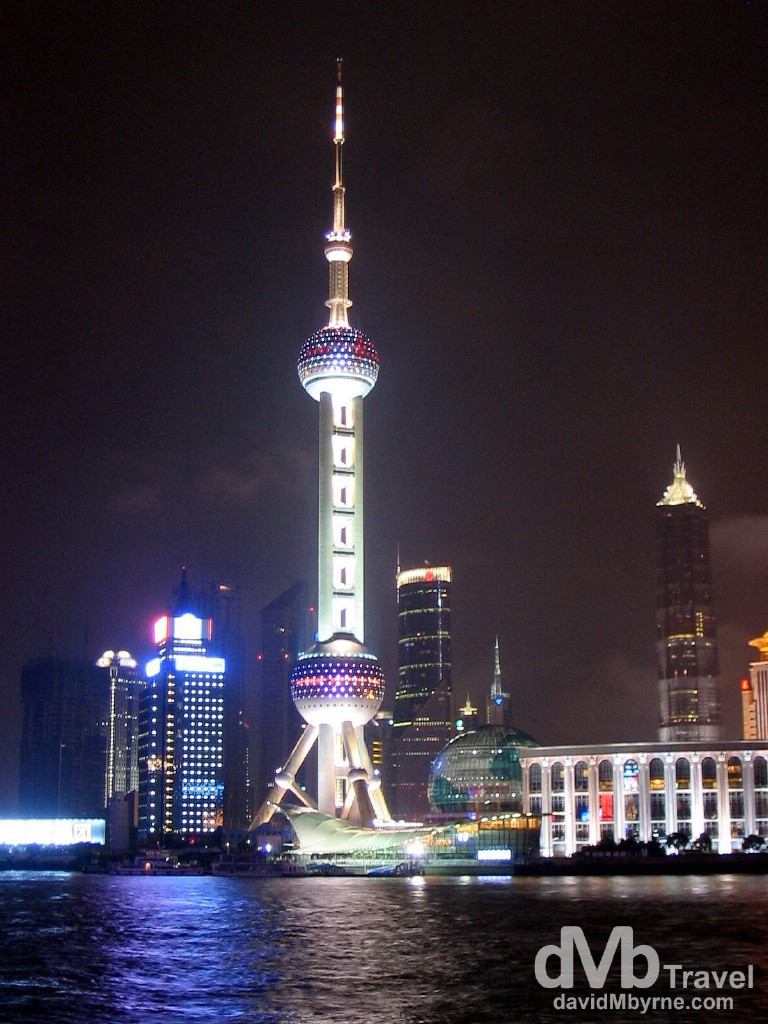 Shanghai’s most famous, most iconic sight is the 1994 Oriental Pearl TV Tower in the New Pudong district across the Huangpu River from the classic, colonial Bund. As recently as 1990, the whole Pudong area was boggy agricultural land. The government, & in a bid to kick-start Shanghai’s development, decided to grant the area Special Economic Zone status. US$70 billion of investment & fourteen years later and the skyline has been completely transformed. It is envisioned that Shanghai will be the next Hong Kong by as early as 2010 & to that end the building goes on unabated with a sea of cranes stretching as far as the eye can see to the right of this picture. Incidentally, there is a skyscraper under construction directly behind the TV tower that will be part of the new Shanghai Financial Centre. Slated, at 460 metres (1,509 ft), to be the worlds tallest building upon completion, this, more than anything, symbolises the rising commercial might of Shanghai, and China, as a whole. Shanghai (

The waterfront Bund by the Huangpu River. During Shanghai’s riotous heyday under the British, the colonial riverfront, the Bund, was the city’s financial and commercial centre. Lined with grand edifices, the Bund waterfront is a vagabond assortment of neoclassical 1930s downtown New York styles & monumental antiquity. The green pyramid roofed building to the left is the Peace Hotel, then, as it is now, the most famous hotel in Shanghai. I attempted to enter its bar to sample some of the jazz the bar is famous for but I thought better of it when I received dubious stares from the bar staff. They must know a backpacker when they see one. My budget wouldn’t stretch to the Peace Hotel and instead I stayed in the beautifully restored Astor House Hotel, itself a bit of a museum with a very interesting past. It was located just behind the Epson sign in the distance. The Bund, Shanghai, China. August 30, 2004. 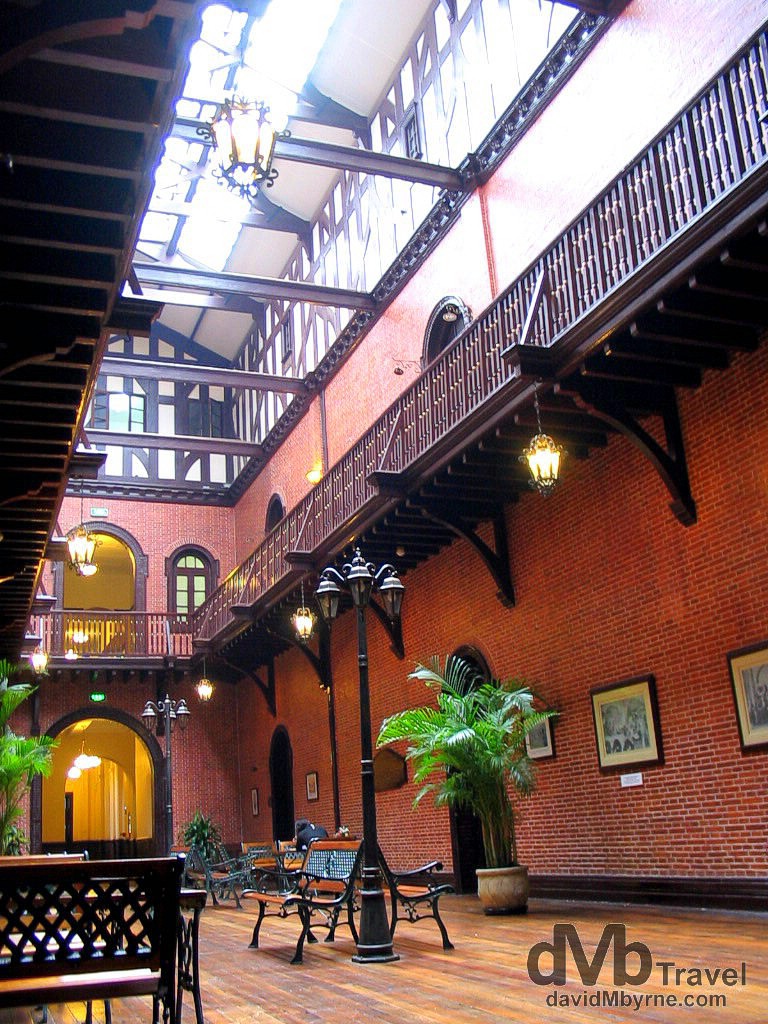 One of the highlights of my time in Shanghai was my accommodation. The Astor House Hotel (also known as The Pujiang) offers budget accommodation in very nice surrounds. This place oozes history and it’s hard to believe they have beds, which they do, or at least they did, for RMB100 (€10). The hotel was built in 1846 to cater for Shanghai’s foreign traders. It was then called Richards Hotel and it was the very first western style hotel in China. But the firsts don’t stop there: in 1882 it housed Chinas the first electric lamps; the first phone call in Shanghai was made from here in 1901; and China’s first motion picture was shown here in 1908. The walls of the hotel show the pictures of the many famous people who have stayed here over the years, including Albert Einstein (in 1922) and Charlie Chaplin (in 1931 & again in 1936). The Astor House Hotel/The Pujiang, Shanghai, China. September 1, 2004.

I spent a few days looking round the city (3 actually), at the end of which I concluded Shanghai isn’t too dissimilar to Beijing. The rate of construction is just as frenzied with new skyscrapers seemingly going up daily, & not just in Pudong. Oh, and you don’t have to wander too far off the tourist trail to witness the chronic wealth gap of the city’s residents. 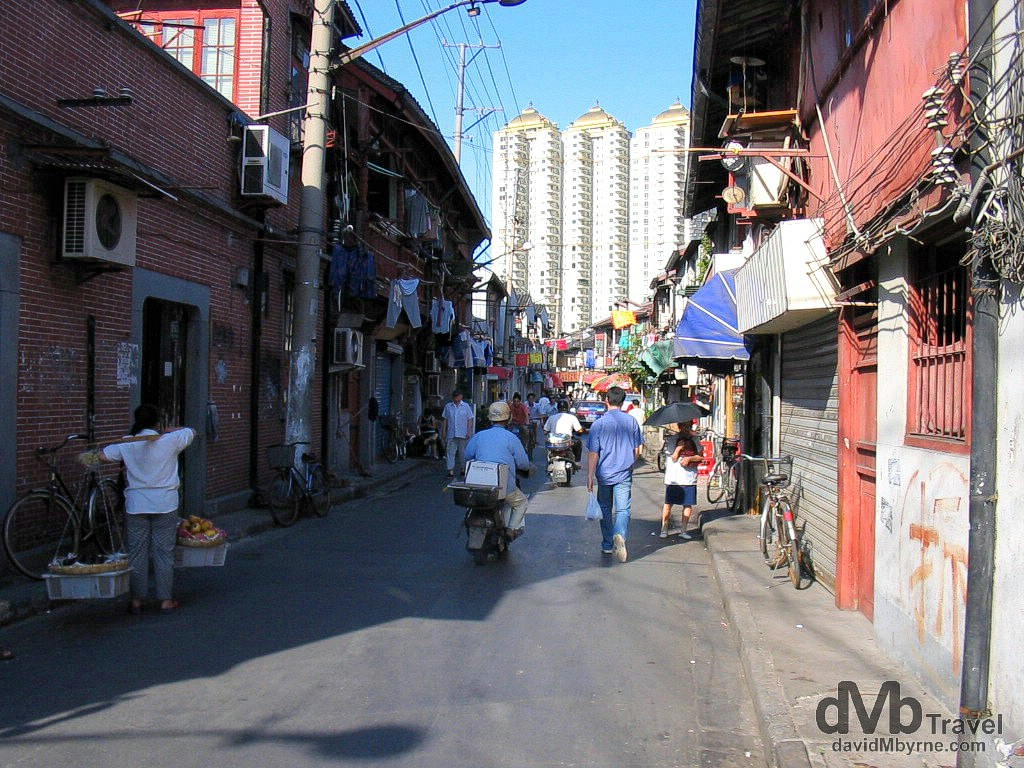 New Shanghai towering over the old as seen from Chunghuang Miao in the Old City. Nowhere are the contrasts between the new and the old Shanghai more apparent than here, in the Chunghuang Miao area of the Old City, where the new high-rises overshadow the older, crumbling residential lanes. While on paper Shanghai may be an economic success story, a lot of challenges remain, as the city struggles to cope with increased worker migration and a huge wealth gap. Chunghuang Miao, Old City, Shanghai, China. August 30, 2004.

Shipping on the Huangpu River. Shanghai is a major shipping port, situated, as it is, near the confluence of the Huangpu & Yangtze Rivers and the East China Sea. I took a trip from the Bund up the Huangpu towards its meeting point with the Yangtze, passing several shipbuilding sites, like this one, and freight storage locations en route. I travelled for hours with no end in sight to the shipyards. While it doesn’t make for a very pretty scene it certainly shows the importance of Shanghai to the shipbuilding community. On the Huangpu River, Shanghai, China. August 31, 2004. 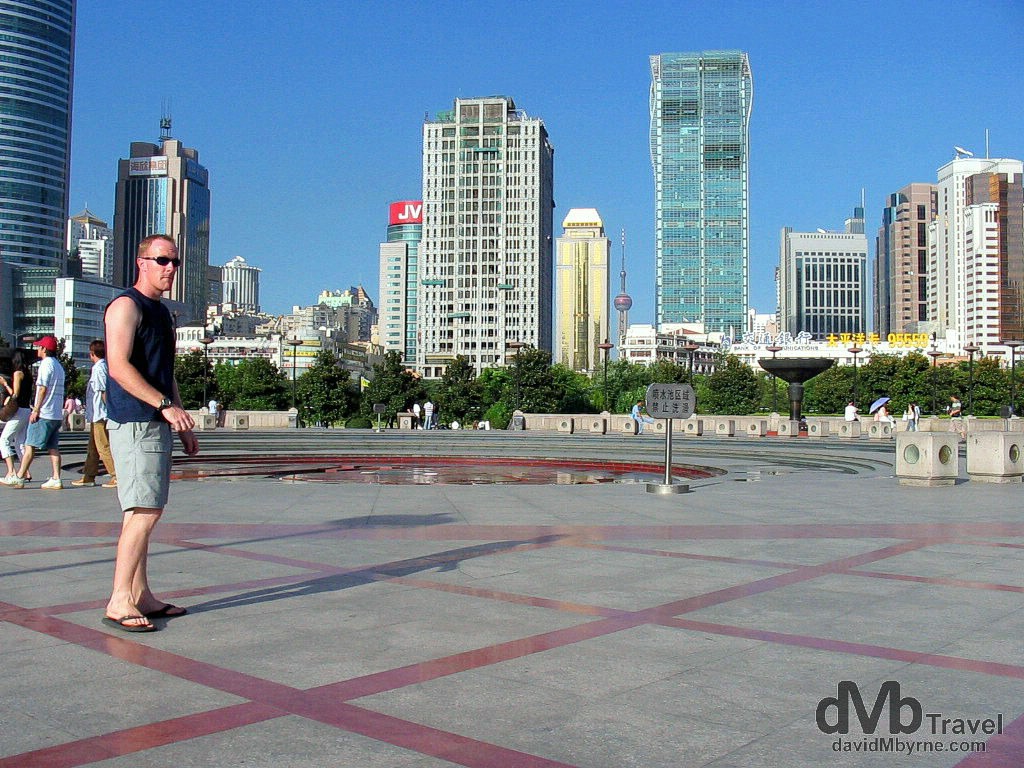 A pictue of me – yes, that’s me – in Renmin Square, or the People’s Square, a large public square in the Huangpu District of the city. In the days of British rule the square was part of the Shanghai racecourse. Remodelling turned it into what it is today – the site of various museums, theatres & municipal government buildings. Renmin Square, Shanghai, China. August 30, 2004.

Moving On
A first visit to one of the world’s great cityscapes, Hong Kong.

Subsequent Years Of China Travel
More from a subsequent, 2012 visit to Shanghai. Plus, all posts from China over the years.