Jeju-do (island) is a small island – although it’s still South Korea’s largest – situated in the East China Sea some 100 kilometres south of the Korean mainland. I’d been meaning to pay a visit to the volcanic island for a while. I’d heard the tags – Korea’s ‘Honeymoon Island’, the ‘Korean Hawaii’, complete with palm trees, beaches & a volcano, Hallasan (Mount Halla), a massive shield volcano & the country’s highest peak. Jeju had me intrigued. Had me intrigued for a while. So I decided to pay it a visit all the way from the Korean capital on the mainland. I spent two days touring the island, one of South Korea’s nine provinces – day one was spent zipping around on a scooter visiting some of the islands’ most well-known sights while day two was spent nursing sunburn & experiencing the island’s most unique & most erotic attraction.

Region – East Asia (dMb tag: East Asia). Capital – Seoul. Population – 52 million. Official Language – Korean. Currency – South Korean Won (KRW). GDP (nominal) per capita – US$27,500 (26th). Political System – Presidential republic. UN Member? – Yes (admitted September 1991). G20 Member? – Yes. Size – 100,295 km² (one-fifth smaller than North Korea, its northern & only neighbour, and slightly smaller than the US state of Kentucky). Topography – Mostly mountainous; a hikers nirvana, over 70% of the country is covered in largely uninhabitable mountains. Climate – Hot & sticky summers, bitterly cold winters. Formation/Independence & Brief History – Independence from Japan, who annexed the Korean Peninsula in 1910 ending centuries of dynastic rule, on August 15, 1945, thereafter the peninsula officially divided by the US & the Soviet Union at the 38th parallel. The Republic of Korea declared on August 15, 1948, 3-plus weeks before the September 9 formation of the Democratic People’s Republic of Korea, a.k.a. North Korea. The failure of talks to unify the peninsula sparked the 1950-1953 Korean War, with the communist-led North invading the South. This ended in a military stalemate, the formation of the DMZ (Demilitarized Zone) and the signing of an armistice (but no peace treaty). UNESCO World Heritage sites – 12. Tourism Catchphrase/Slogans – Imagine Your Korea. Famous For – Sharing the world’s most fortified border with its troublesome & aloof northern neighbour; cosmetics; electronics (home to Samsung, the world’s largest electronics firm, & LG); internet connectivity; cars (home to Hyundai & Kia); K-pop & the Korean Wave; ajumma power; Psy’s Gangnam Style; its cuisine (kimchi & BBQ) & communal eating; soju (a clear, colourless distilled beverage liberally drank in shots); noribang (karaoke rooms); hospitality. Highlights – The buzz & palaces of Seoul, a.k.a. The Soul of Asia; Jeju Island; Gyeongju; Seoraksan National Park. South Korea Titbits – Rising from the ashes of the Korean War, a multi-decade economic surge, termed the ‘Miracle on the Han River’, means that today South Korea is the world’s sixth largest exporter (it ranks 1st in worldwide mobile phone shipments, 2nd in shipbuilding & semiconductor sales and 5th in automobile production). Not bad for a country that has been officially at war since 1950; after many failed bids, South Korea’s PyeongChang will host the 2018 Winter Olympics; pre-empting the future & echoing the wish of the South Korean populous, the country’s constitution officially recognises the Korean peninsula as one country; the world’s first country to fully transition to high-speed Internet (in 2005), today South Korea boasts the world’s fastest internet speeds; although largely insular, Korean society is truly one of a kind with its own language, script (hangul), food & culture. 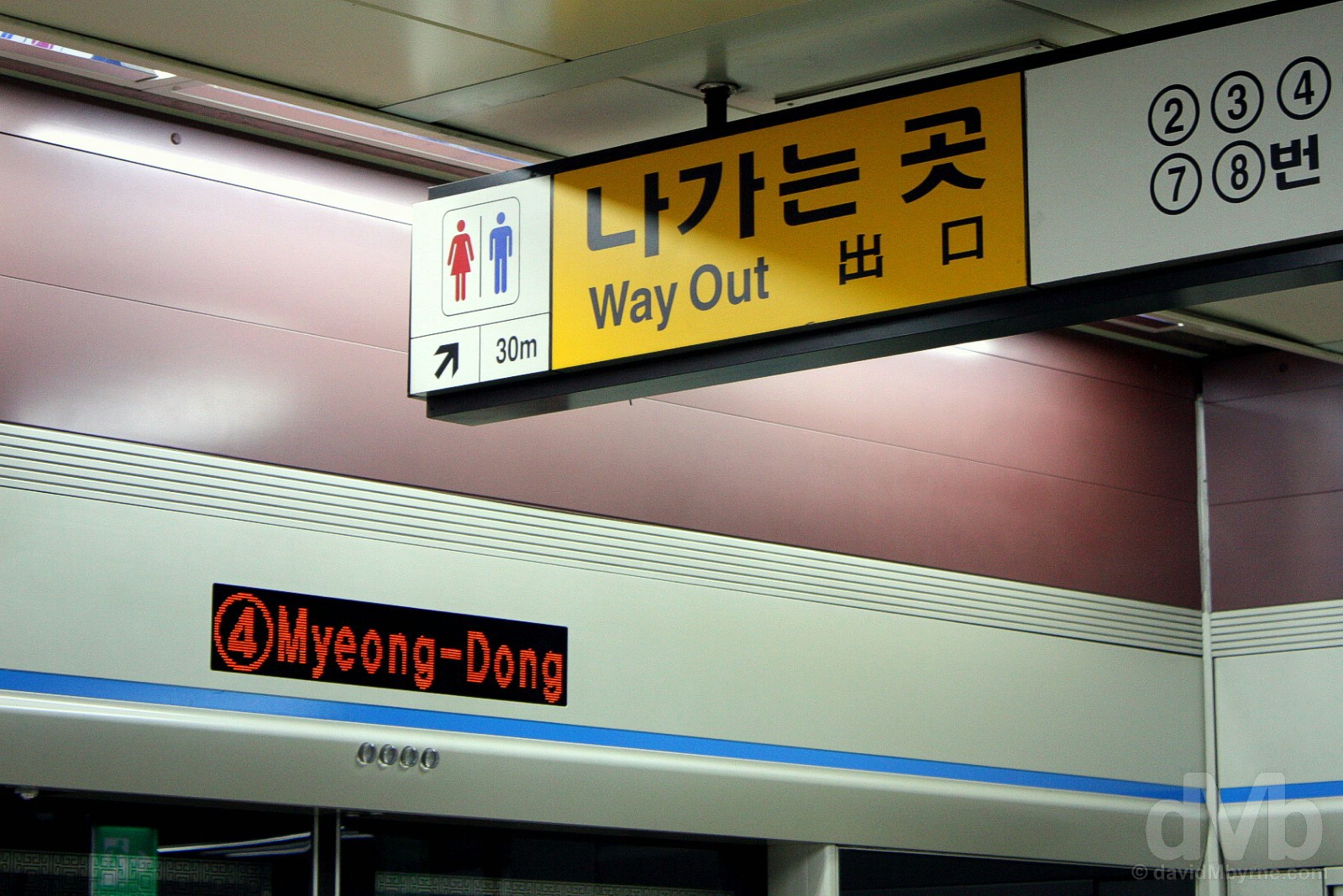 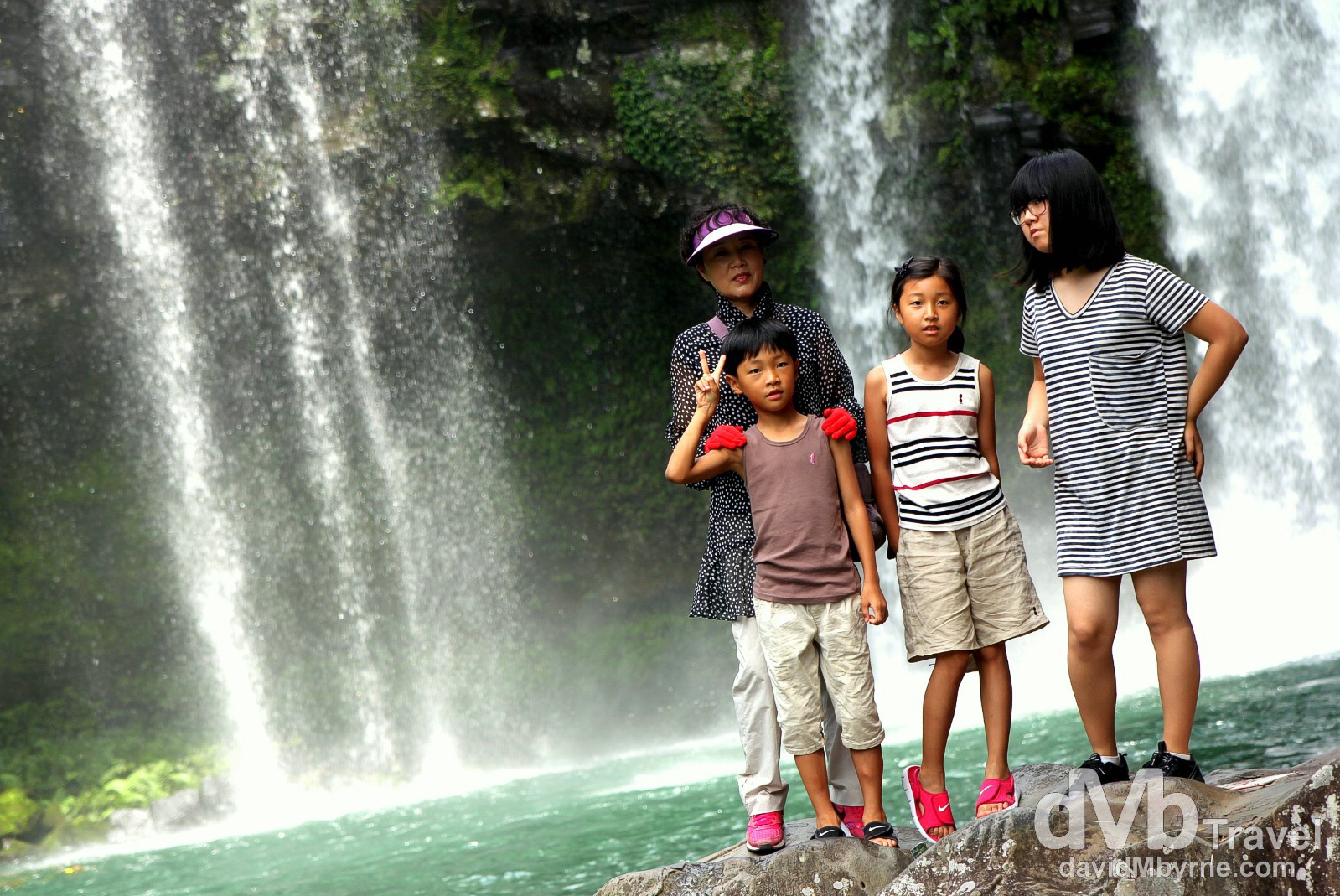 The first of two waterfalls visited on day one of the Jeju-do trip, the 22-metre high Cheonjiyeon Falls is one of the main tourist draws on the island. It was photogenic yes, but I found photographing Koreans being photographed in front of the falls more appealing than photographing the falls themselves. Cheonjiyeon Waterfall, Jeju-do ( 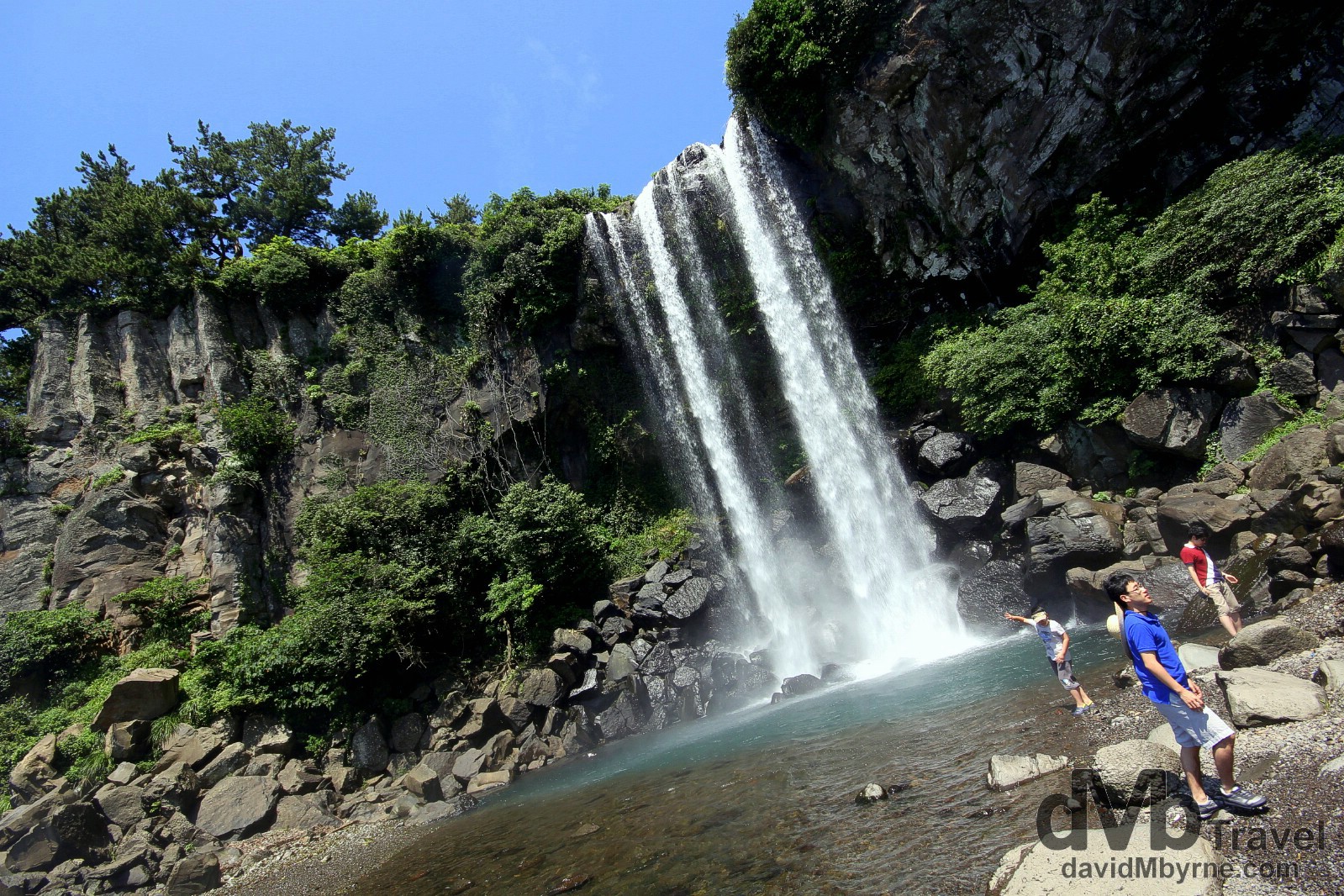 Jeongbang Waterfall, the only waterfall in Asia to fall directly into the ocean. Jeju Island, South Korea. July 16th 2011

The second waterfall I visited was the much more impressive and accessible Jeongbang falls. At 23 meters, it is only one meter taller than Cheonjiyeon falls but its location, falling into a pool right by the sea, makes it all the more impressive looking. According to some sources, no doubt most of them Korean, Jeongbang falls is the only waterfall in Asia that falls directly in the ocean, even though it technically doesn’t (although it does come mighty close).

UPDATE – November 11th, 2011: Jeju Island, A New7Wonder of Nature
Following a 4-year initiative, Jeju Island has been added to the New7Wonders of Nature list. The list, peculiarly named considering there is no preceding ‘old’ list, was chosen by Joe & Josephine Public through a global internet poll, with Jeju garnering enough of the some 100 million votes cast to crack the list. Personally I didn’t think little-known Jeju stood a chance – of the 28 finalists there were what I would consider better known, more deserving options, including the likes of the Grand Canyon, Uluru (Ayers Rock) & Galapagos. That said, & with the benefit of hindsight, I should have suspected Jeju would do well given South Korea’s ‘connected’ status & the fact that the final list was determined by an internet poll (did the Mud Volcanoes in Azerbaijan really stand a chance?).

One of the most recognisable natural features of Jeju-do is Seongsan Ilchubong (Sunrise Peak), located at the extreme east of the island. It’s a 180-metre high tuff (hard volcanic rock composed of compacted volcanic ash) volcano & scaling its 600+ steps to take in a Jeju sunrise is one of the Jeju’s most popular must-dos. Not that I did; after taking over an hour to scooter here from my base in the southern city of Seogwipo (where the two aforementioned waterfalls are to be found), I preferred to view Seongsan Ilchubong from afar, a much more relaxing pursuit. 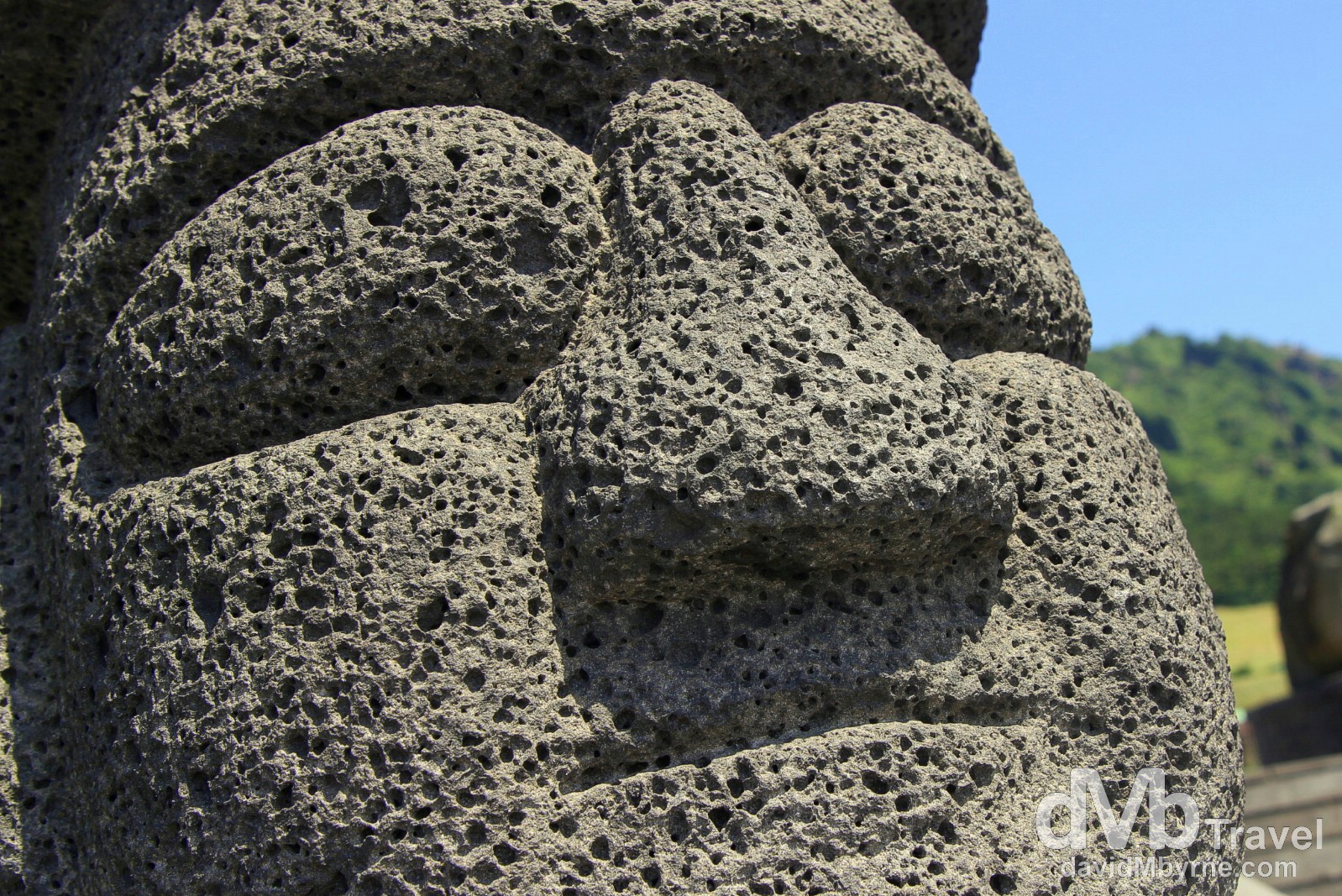 The face of Jeju Island’s symbolic Dol Hareubang, a.k.a. the Grandfather Statues. The statues can be found all over the Island with this one located at the base of Seongsan Ilchubong (Sunrise Peak). They are considered to be Gods offering both protection & fertility and were placed outside of gates for protection against demons travelling between realities. Theories abound as to their origin with most believing they are a counterpart to the jangseungs (totem poles) of the Korean mainland. Jeju-do (Island), South Korea. July 16th, 2011 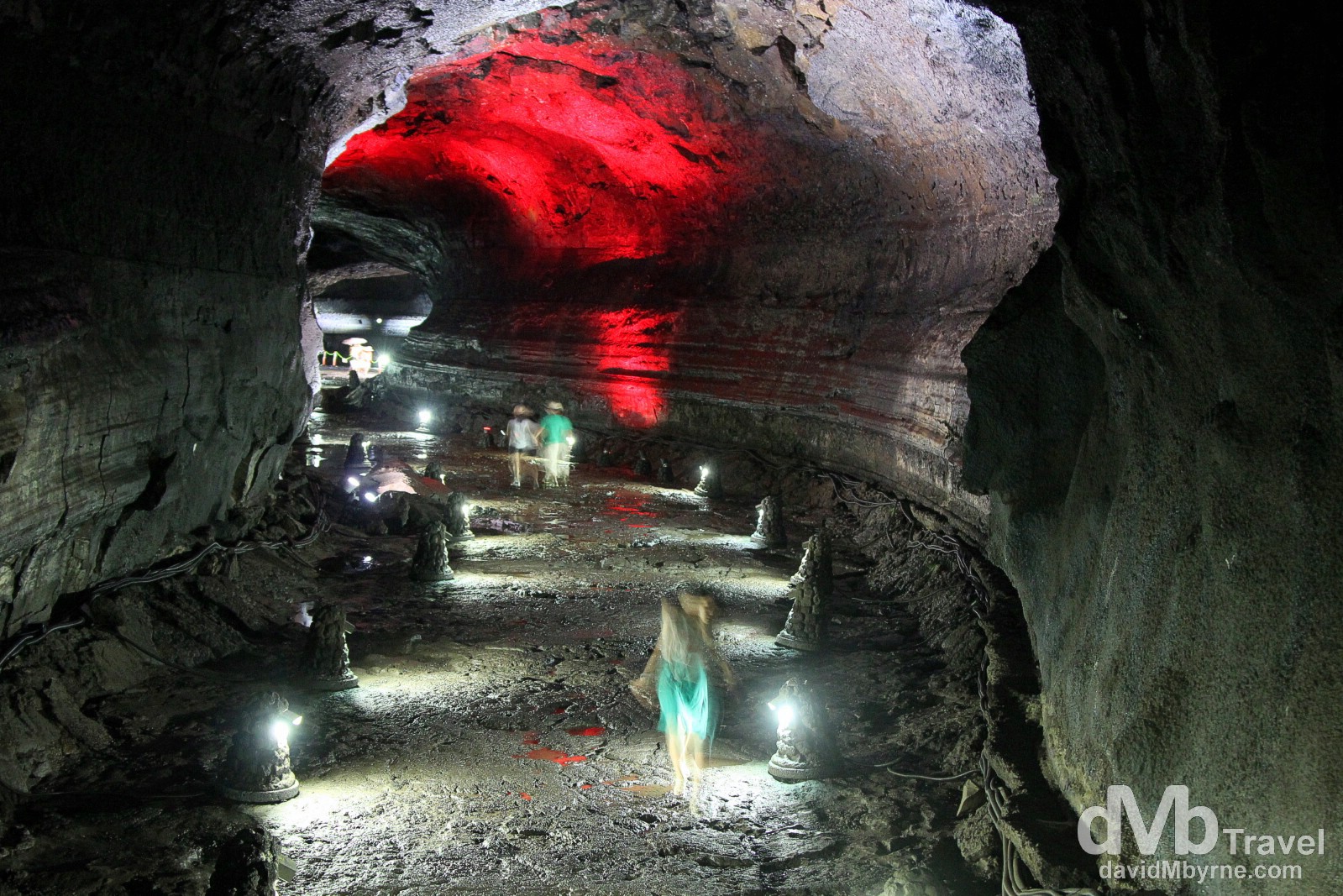 The Manjanggul Lava Tube is 30 metres high at its highest point & 7 kilometres long, only 1 kilometre of which is open to the public. In 2007 it was, along with two other volcanic sites on the island, awarded UNESCO World Heritage status owing to its excellent condition of preservation despite its age – it is estimated to be 300,000 to 200,000 years old. Visiting the tube is a cold (very cold), wet &, sporadic colourful lighting aside, dark experience. But the reward for walking/stumbling that aforementioned 1 kilometre in cold darkness? You get to feast your eyes on a 7.6 metre lava column, the largest known lava column in the world. Ample reward I’d say. Jeju-do (Island), South Korea. July 16th 2011. 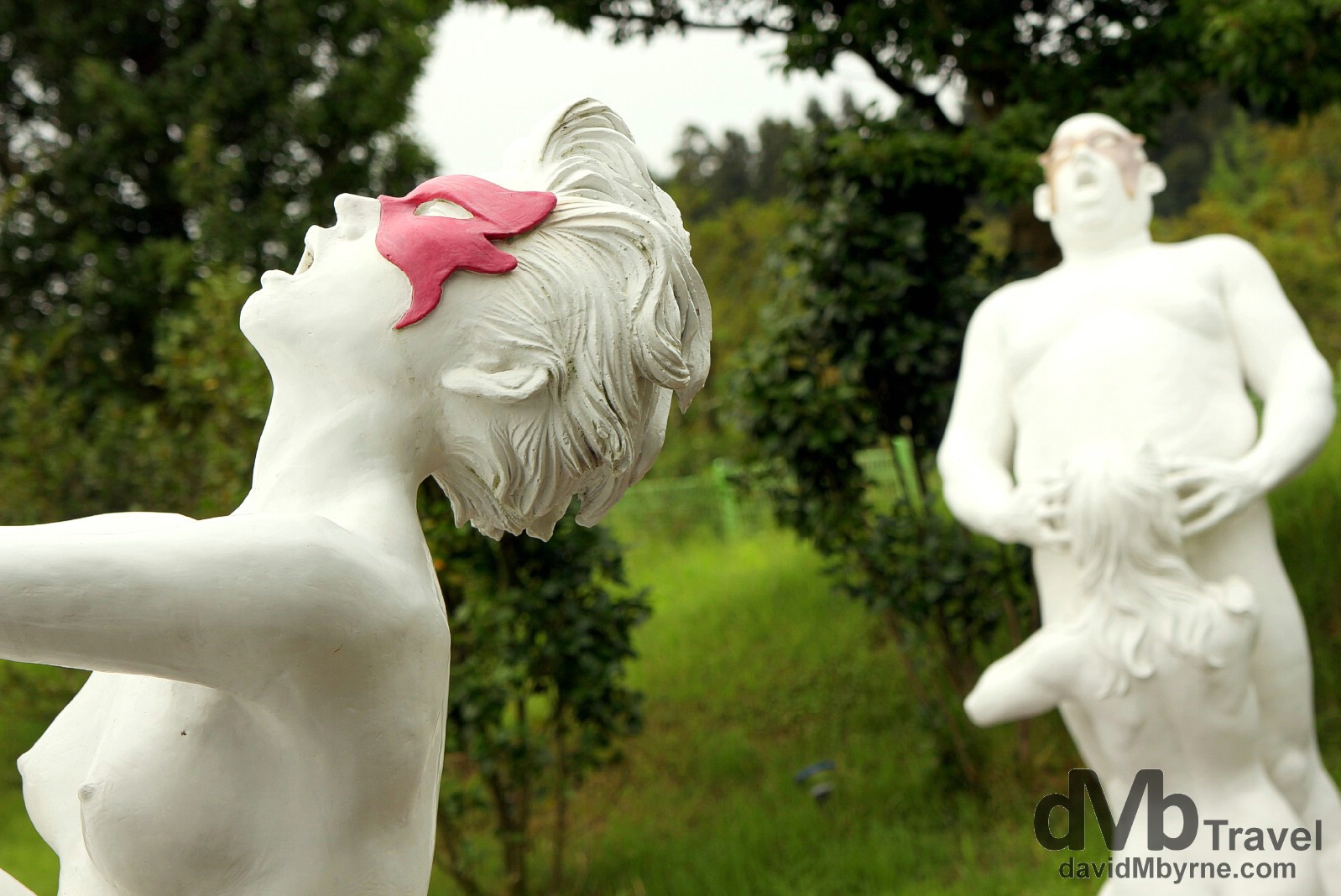 Sculptures in Love Land. Leaving the best for last. Oh yes, Love Land. On an island renowned as a honeymoon destination, & with museums or theme parks for just about everything (Teddy Bear museum anyone), it shouldn’t come as any surprise to see Love Land, Jeju’s most eccentric and internationally infamous attraction. This bizarre, adult-only sculpture park is, according to Wikitravel, “almost a reason in & of itself to visit Jeju” & indeed was top of my list of must-see sights long before coming here. Created by graduates of Seoul’s Hongik University, few, if any, of the (over 140) exhibits are downright shocking – they just have a cunning knack of evoking bemusement. Love Land, Jeju-do (Island), South Korea. July 17th, 2011