Some Of The Tourist Highlights Of South Korea's Second City

“A ‘love motel’ in a lovely city, & with no Seoul rain to boot. What more could I have asked for?”

My July 2004 visit to Busan, South Korea was unplanned. Inclement weather in the capital of Seoul saw me heading south to the country’s second city & its largest seaport in the hopes of staying dry – summer on the Korean Peninsula is the hot, muggy wet season with the 2004 summer seemingly being a little wetter than most. It worked & I managed to stay dry without having to stay indoors, which means I got to see a bit of Busan on this, my second visit to the city having nearly froze to death on the city’s famous Haeundae Beach some 6 months previous. 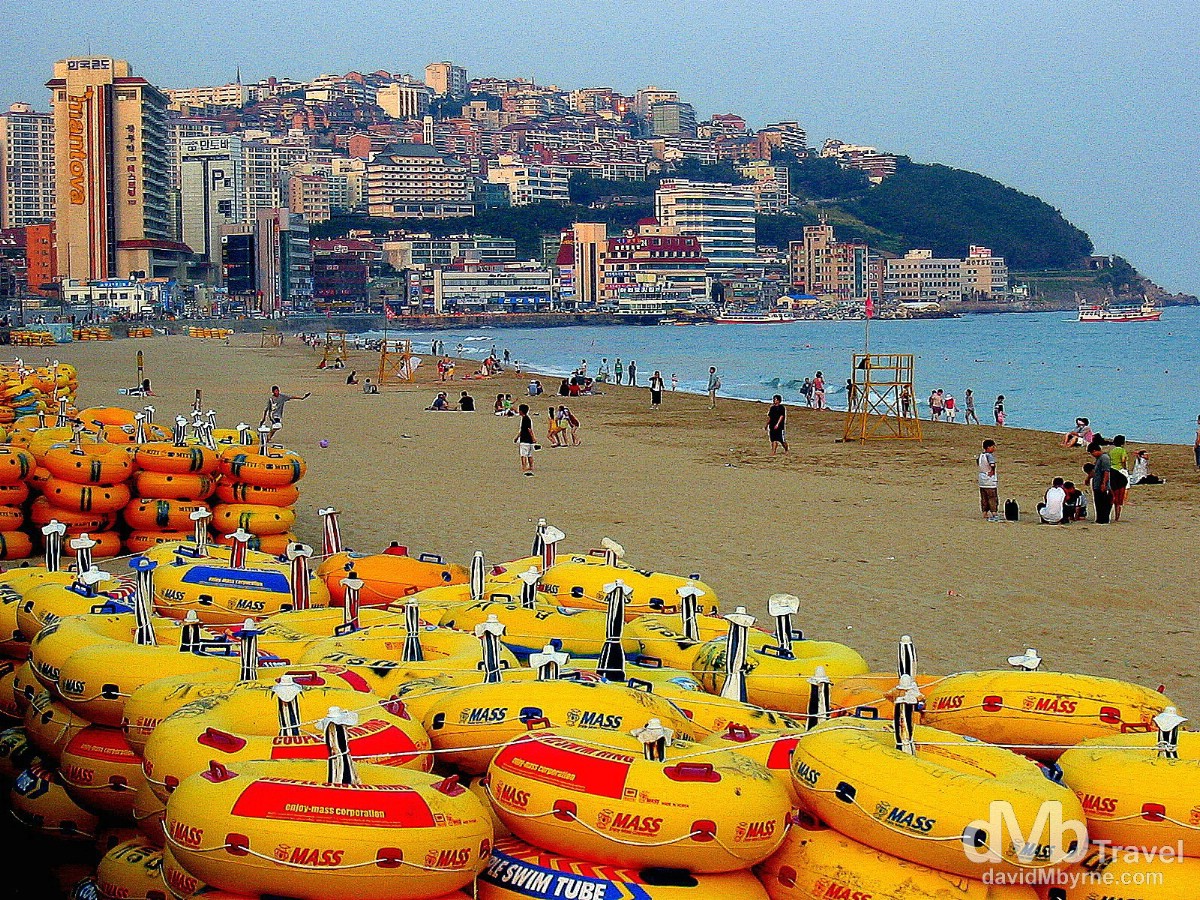 Busan is the so-called summer capital of Korea as it attracts tourists from all over the country to its six beaches. Easily the city’s most popular beach is this one, Haeundae Beach. It comes complete with high class hotels and a carnival boardwalk, and while it is generally classed as the most beautiful beach in Korea it’s far from its quietest – it’s jam-packed with yellow rubber-ring-toting Koreans during the summer months. Haeundae Beach, Busan (

This time around I made more of an effort to be more of a tourist, made more of an effort to see what Busan, a city known for its beaches, hot springs, nature reserves and International Film Festival, has to offer. Quite a lot as it turns out: Mount Kumjeong offers a ride in a cable car, a fortress, temples & stunning views back over the concrete jungle that is the sprawling outskirts of the city; the city’s frenetic Jagalchi Fish Market is the country’s biggest, and best; Yongdusan Park is where you’ll find Busan Tower, itself offering great views over Busan port, one of Asia’s largest; the Nampodong district offers a typically cramped Asian, neon-heavy shopping, dining & drinking experience thanks to a warren of bustling streets; & of course there’s the aforementioned jam-packed (in summer) Haeundae Beach, Korea’s very own Waikiki.

In total I effortlessly passed 5 nights in Busan, nights spent in a Korean Love Motel, erotically decorated, spotlessly clean, & well equipped budget accommodation options found all over Korea, but especially in the vicinity of the transport options (bus or train stations). A love motel in a lovely city, & with no rain to boot. What more could I have asked for? 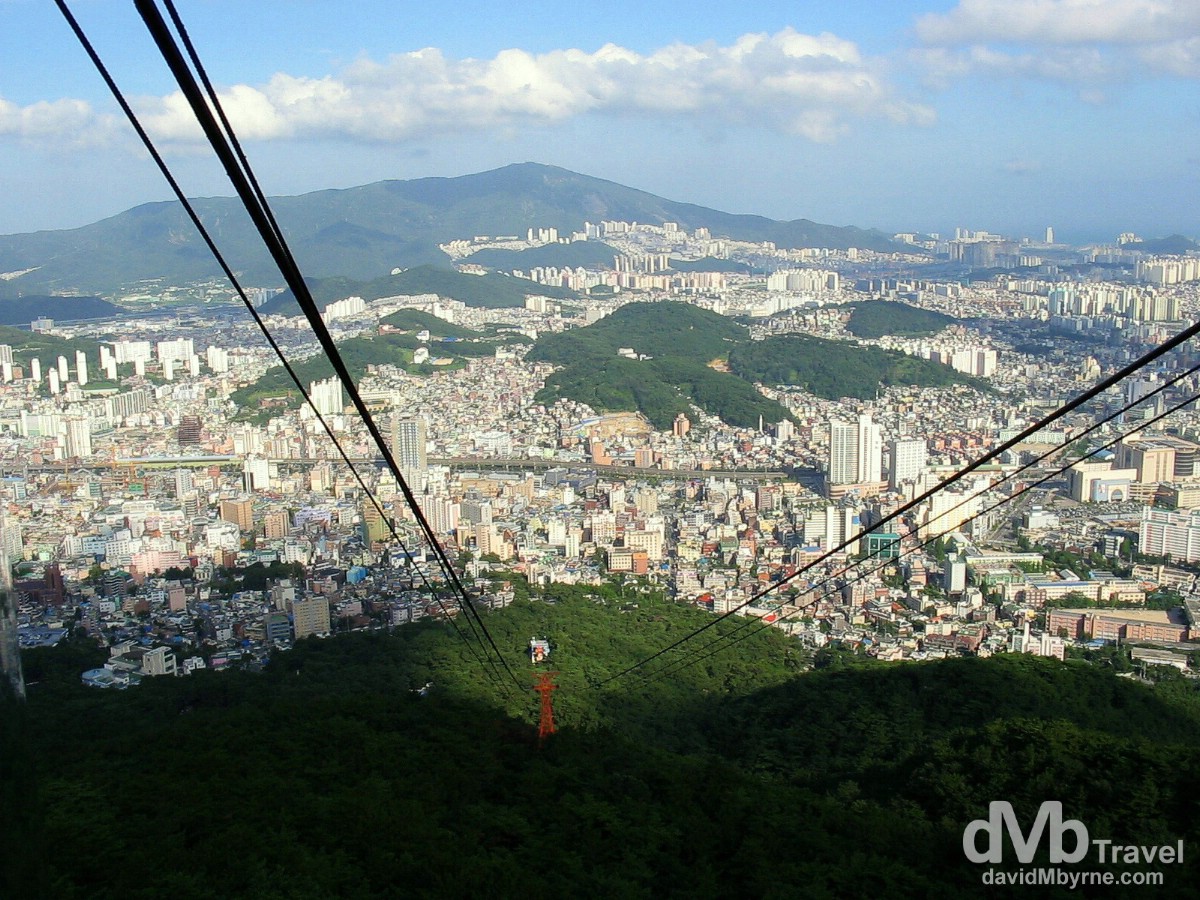 One of the first things I did on this visit to Busan was to escape the crowds and visit Mount Kumjeong (or Geumjeongsan), the mountain overlooking Busan which, not surprisingly, is the city’s most popular hiking destination – Koreans adore hiking. It’s topped by a fortress, the Geumjeong Sanseong, which has some 17 kilometres of walls, four gates and four observation towers. It was built between 1701 and 1707, its aim to repel invading Japanese and Chinese armies. It’s somewhat ironic then that most of the structure was destroyed during the 1910-1945 Japanese occupation of Korea. Restoration work began in 1972 and continues today. While I walked the whole 17 kilometres of the fortress walls last January, this time around the heat meant I didn’t venture too far from the cable car base station, from where there are splendid views back to a portion of northern Busan nestled in Nakdonggang valley. Mount Kumjeong (Geumjeongsan), Busan, South, Korea. July 18, 2004 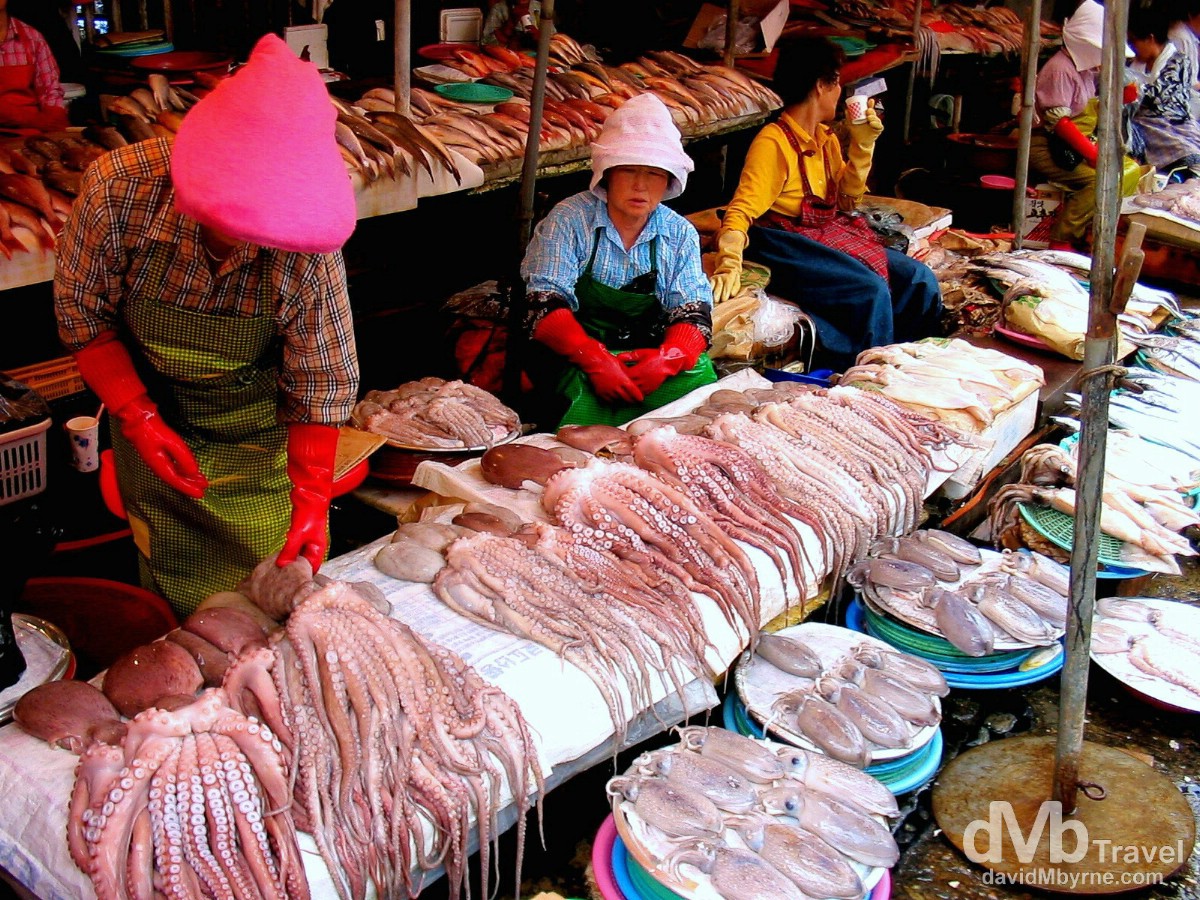 Octopus on sale in the Jagalchi Fish Market, a very interesting place to visit and one of the city’s most popular tourist destinations. The market, a huge (mostly) open-air facility lining the Busan docks, is the biggest fish market in a country that loves anything emanating from the sea. As you might expect it is a wet & smelly place to be and no matter where you look you’ll see ajumma (married or old Korean women) after ajumma filleting, with proficient ease, fish, eels or anything else with gills unlucky enough to end up here. Jagalachi Fish Market, Busan, South Korea. July 19, 2004.

UPDATE || November 23, 2007
The market got shelter. Today a fancy new custom-built building houses the Jagalachi Fish Market, and while the markets buyers & sellers no doubt appreciate the shelter the building provides in the colder winter months, I feel the building has taken away some of the unique, chaotic atmosphere of the old, open-air market. But, & the new building aside, it’s still a fascinating place to visit, a definite Busan must-do. Here are a few pictures I captured in the new-look fish market on this 2007 visit. 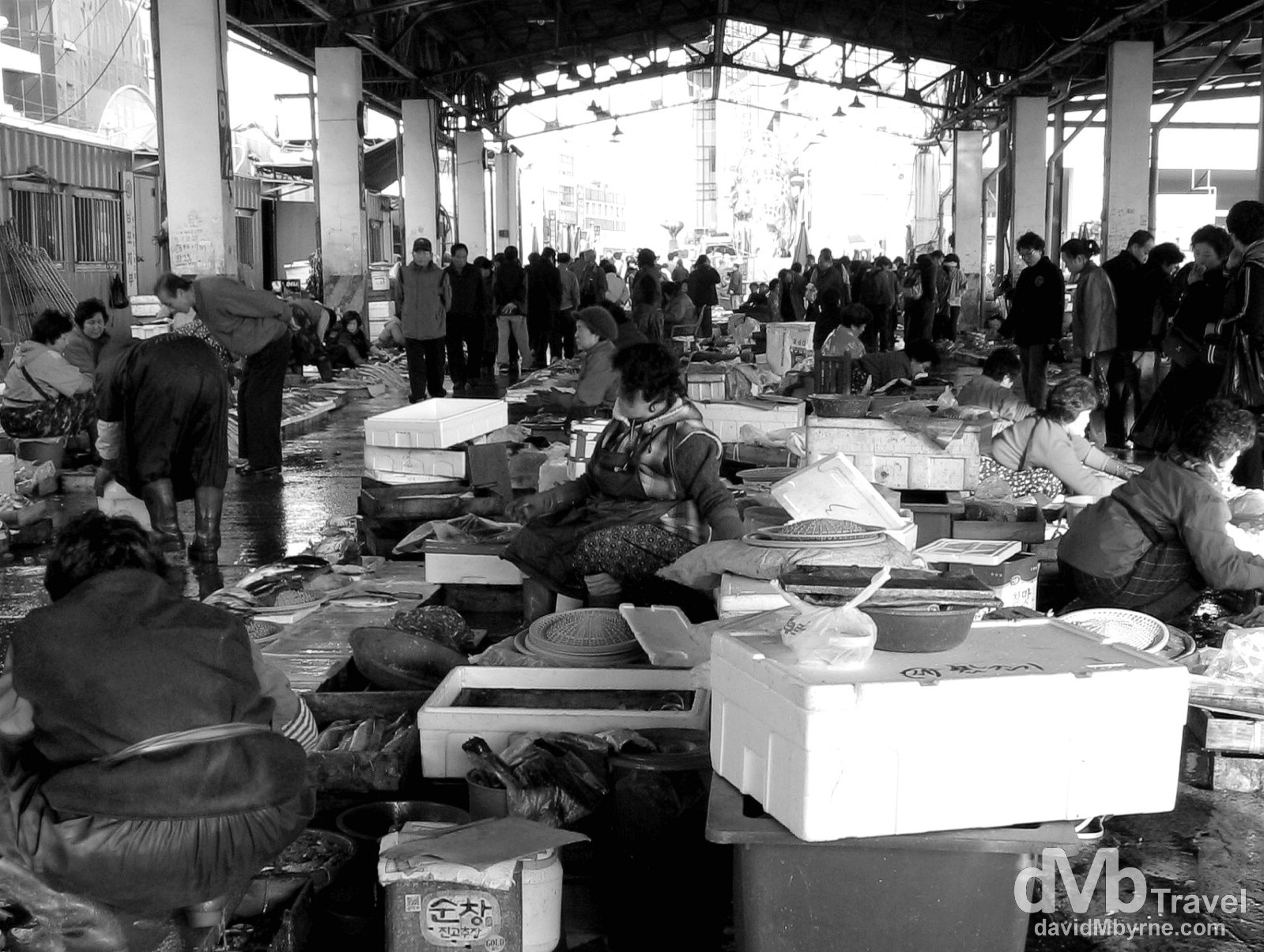 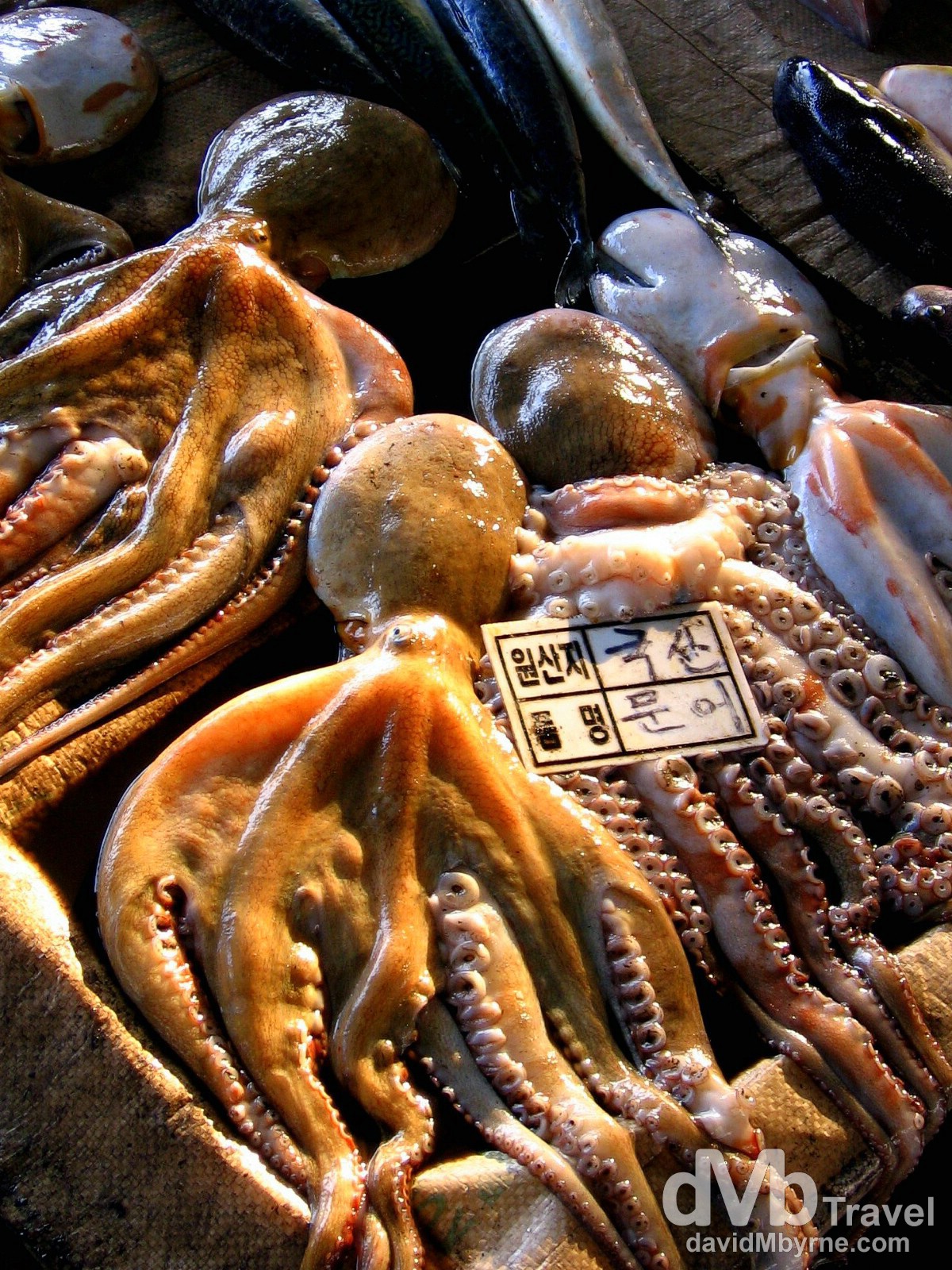 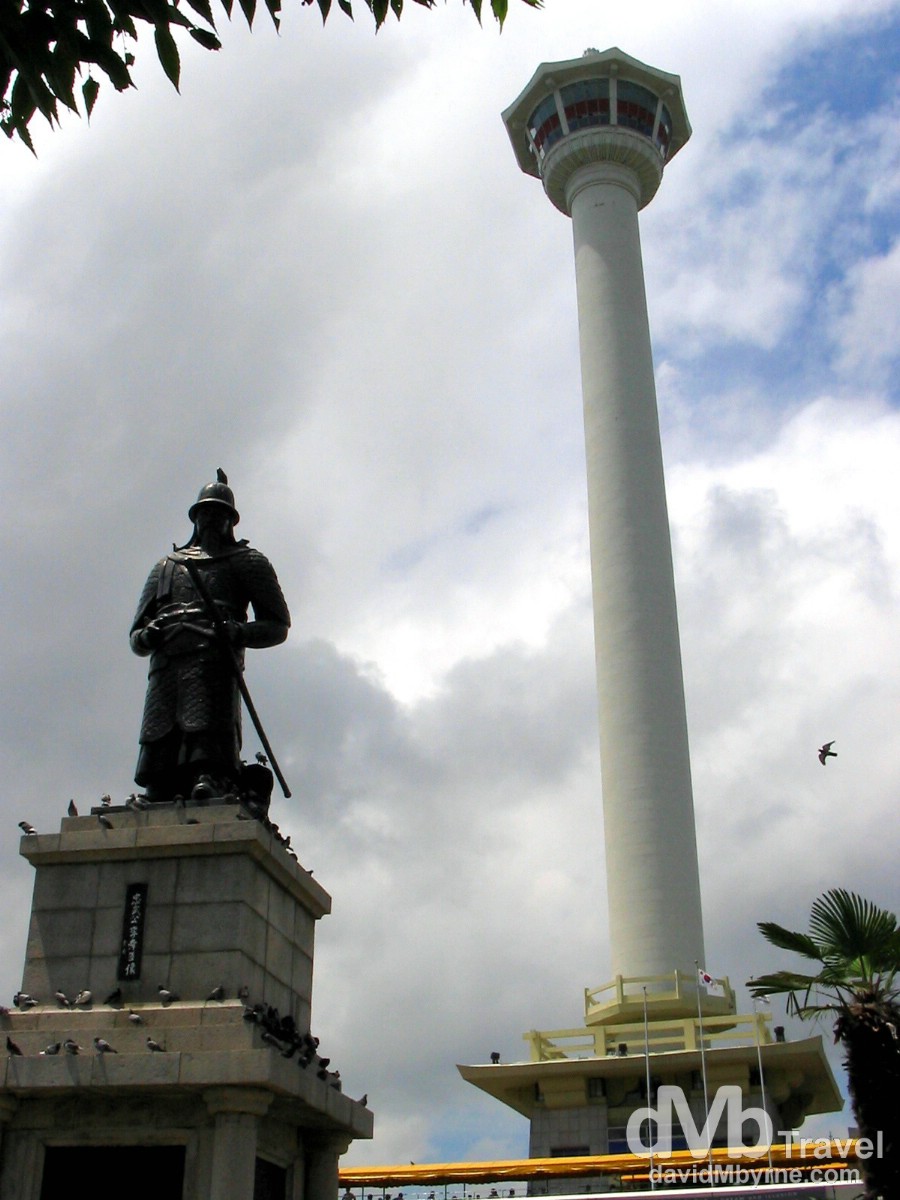 This is Busan’s effort at an observation tower, the 120m-high Busan Tower in the city’s Yongdusan Park. The tower is a bit weathered but still offers great views of the Busan harbour & port, the largest in Korea and the 3rd largest port in Asia (after Singapore and Shanghai). The statue seen here is that of Admiral Yi Sun-shin (1545-1598), a Korean naval leader noted for his victories against the Japanese navy during the Japanese invasions of Korea (1592-1598). Also to be found in the park is a memorial tower commemorating the April 19th student uprising, a stele containing the National Charter of Education, a bust of someone called Baeksan An Hui-je, a victory Bugle, a flower clock, & men playing mahjong. Yongdusan Park, Busan, South Korea. July 19, 2004. 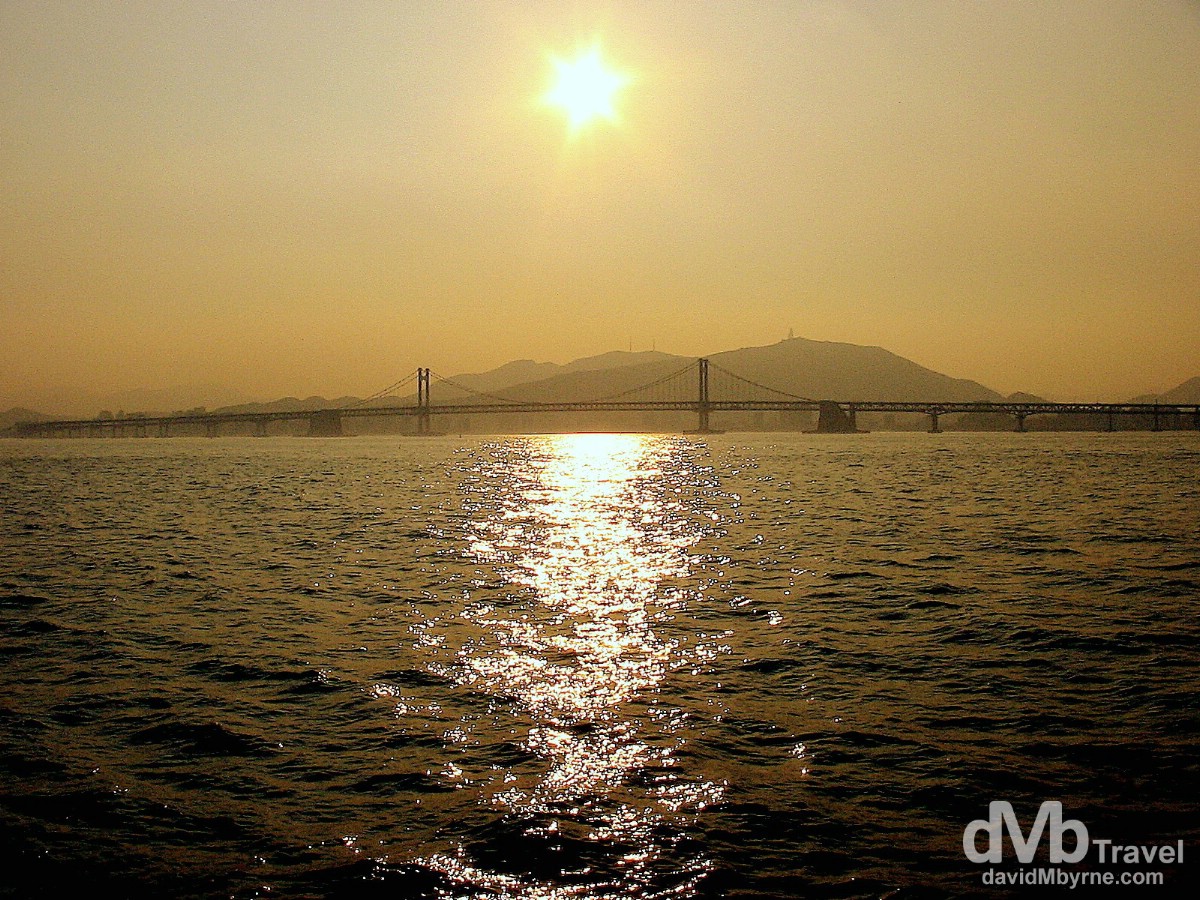 Sunset over the Gwangan Bridge as seen from the Oryukdo Ferry. I took a trip from Haeundae Beach on the Oryukdo Ferry to the outlying island, or what I thought would be outlying islands. Turns out there was one island, and it was more of a rock sticking out of the sea with a lighthouse perched atop. Still, the trip itself was nice as it cooled me down and gave me a chance to take this picture, a picture of the late afternoon sun setting over the Gwangan bridge. The bridge, at 7.5 kilometers long, is the longest suspension bridge in Korea. It was built between 1994 and 2002 and cost a cool €640M. Busan, South Korea. July 21, 2004. 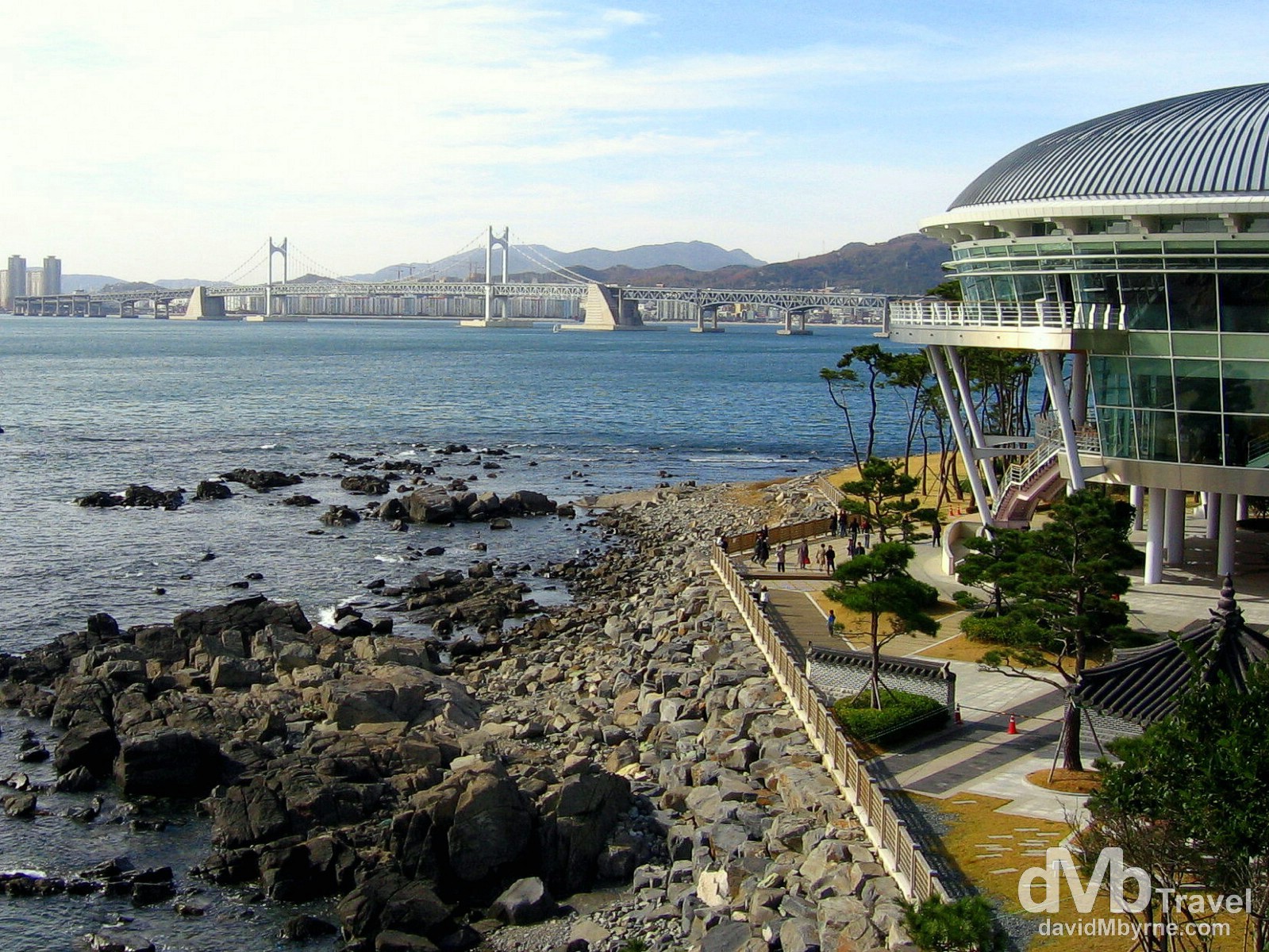 Nurimaru on Dongbaek Island, a headland recreational park in Busan. I had visited the park a few times before (in January 2003 & July 2004) so the area was no surprise to me. What was a surprise was the fancy spaceship-looking building, Nurimaru (meaning ‘World leaders meeting place’), that now decorates the tip of the headland, a small bit of which can be seen here to the right of the picture, as can the Gwangan bridge in the distance. Nurimaru was built to host the 2005 APEC (Asia-Pacific Economic Cooperation) conference, an annual meeting of the leaders of 21 Pacific Rim countries, representing about 60% of the world’s economy, to discuss the regional economy, cooperation, trade and investment. Having a look around the custom built facility, the roof of which was designed to resemble the roof of the Seokguram grotto in UNESCO-listed Gyenonju, I came to the conclusion that yes, it is a mighty impressive building but it’s construction to host a 2 day meeting for world leaders was maybe a tad excessive. Either that or it was built to showcase Korea for what it is these days – an economic powerhouse. Dongbaek Island, Busan, Korea. November 18, 2007.