A Breathtaking Natural Setting In The Volcanic Heart Of New Zealand’s North Island.

Taupo, a lake town with its own array of thermal attractions, is about 60-90 minute drive south of Rotorua in the volcanic heart of New Zealand’s North Island. Its setting, on the shores of the lake of the same name, is spectacular – the view standing by the lake looking out to the distant volcanic peaks of the Tongariro National Park is one of those wonderful travel vistas. 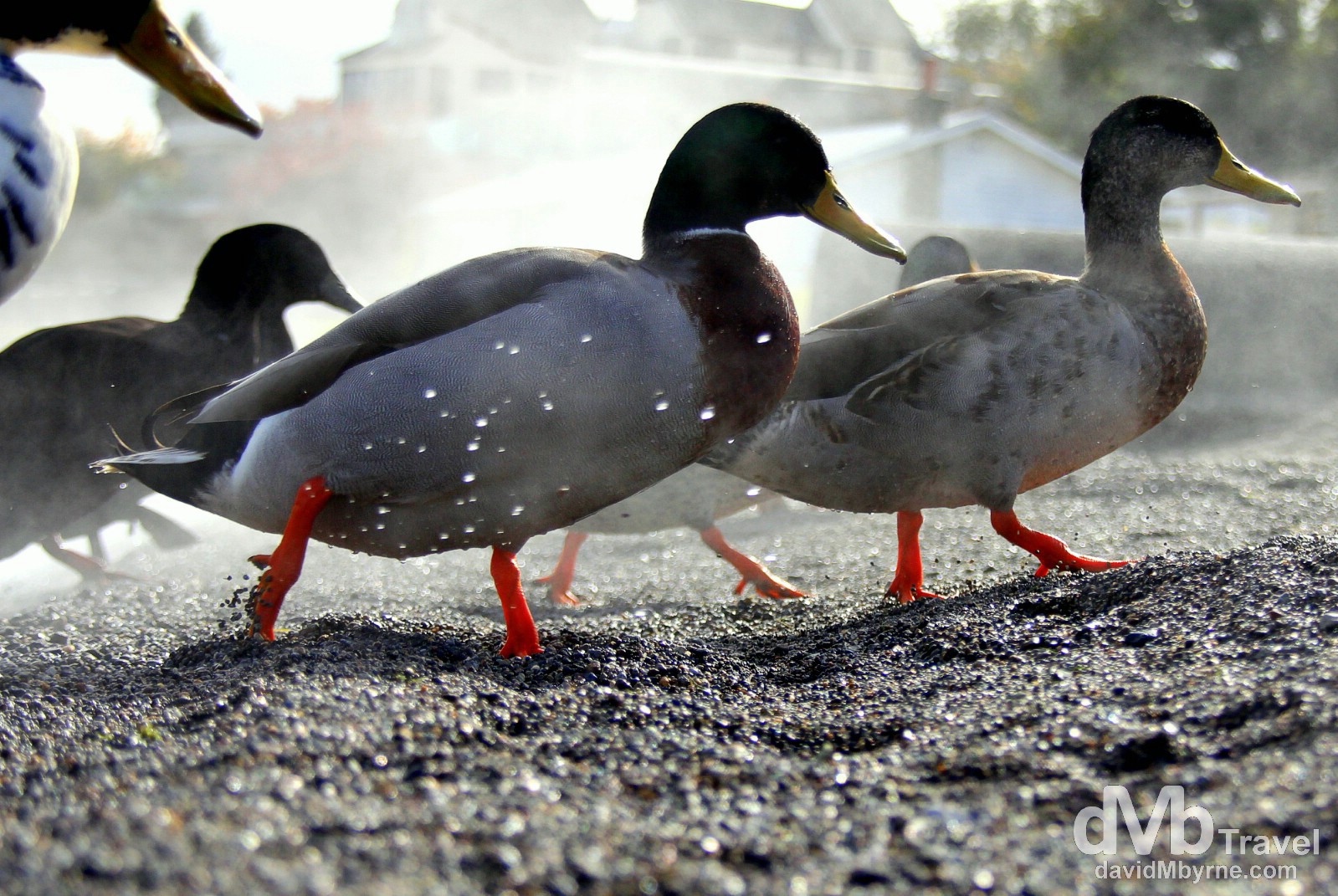 Ducks wading ashore at a thermal beach on the shores of Lake Taupo. OK, so I mentioned how Taupo’s setting was spectacular. And it is, but I didn’t capture it – the weather while I was in town wasn’t very stunning-vista friendly. So I settled for photographing the lake ducks instead as they emerged from the waters of Lake Taupo onto the steamy portion of the lake shoreline, a section heated by an underground thermal rift. On the shores of Lake Taupo (

Lake Taupo
Lake Taupo is the water-filled crater of a very large volcano. A very, very large volcano & one that has been active for over 300,000 years. The crater, its caldera, was made by a monumental eruption some 26,500 years ago in what was possibly the biggest volcanic eruption the world has ever seen. Scientists have estimated that since that big bang all those years ago that the volcano has erupted another 28 times, with the most recent eruption being approximately 1,800 years ago. Taupo’s setting is so spectacular that it’s hard to believe while standing on the shores of the lake looking out to the distant peaks of the Tongariro National Park that such beauty was created as the result of such a cataclysmic & destructive event. 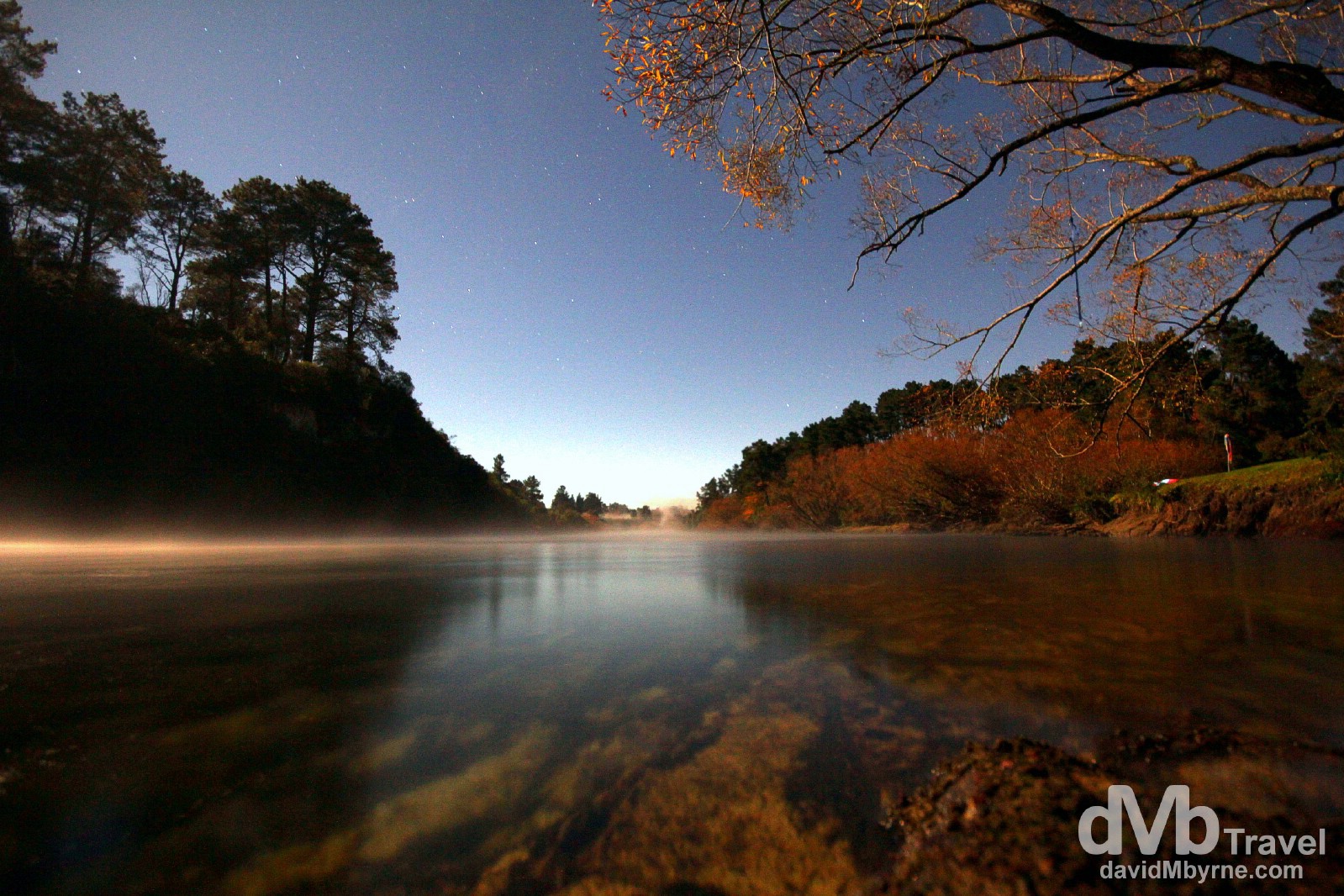 An extended exposure picture of the Waikato River, Taupo. I spent my time in Taupo camping in Reid’s Farm campsite by the banks of the Waikato River, New Zealand’s longest. It starts its 425 kilometre journey here in Taupo as it drains out of the lake before before continuing north & finally flowing into the Tasman Sea in Port Waikato, where I was some 4 days ago now. The picture above, a 20-second exposure, was taken at 8:30 p.m. (it’s dark out here at this time of year, New Zealand’s autumn/Fall, at approximately 6 p.m.). There wasn’t a cloud in the sky & it was a bitterly cold night. Reid’s Farm campsite, Taupo, North Island, New Zealand. May 6th 2012. 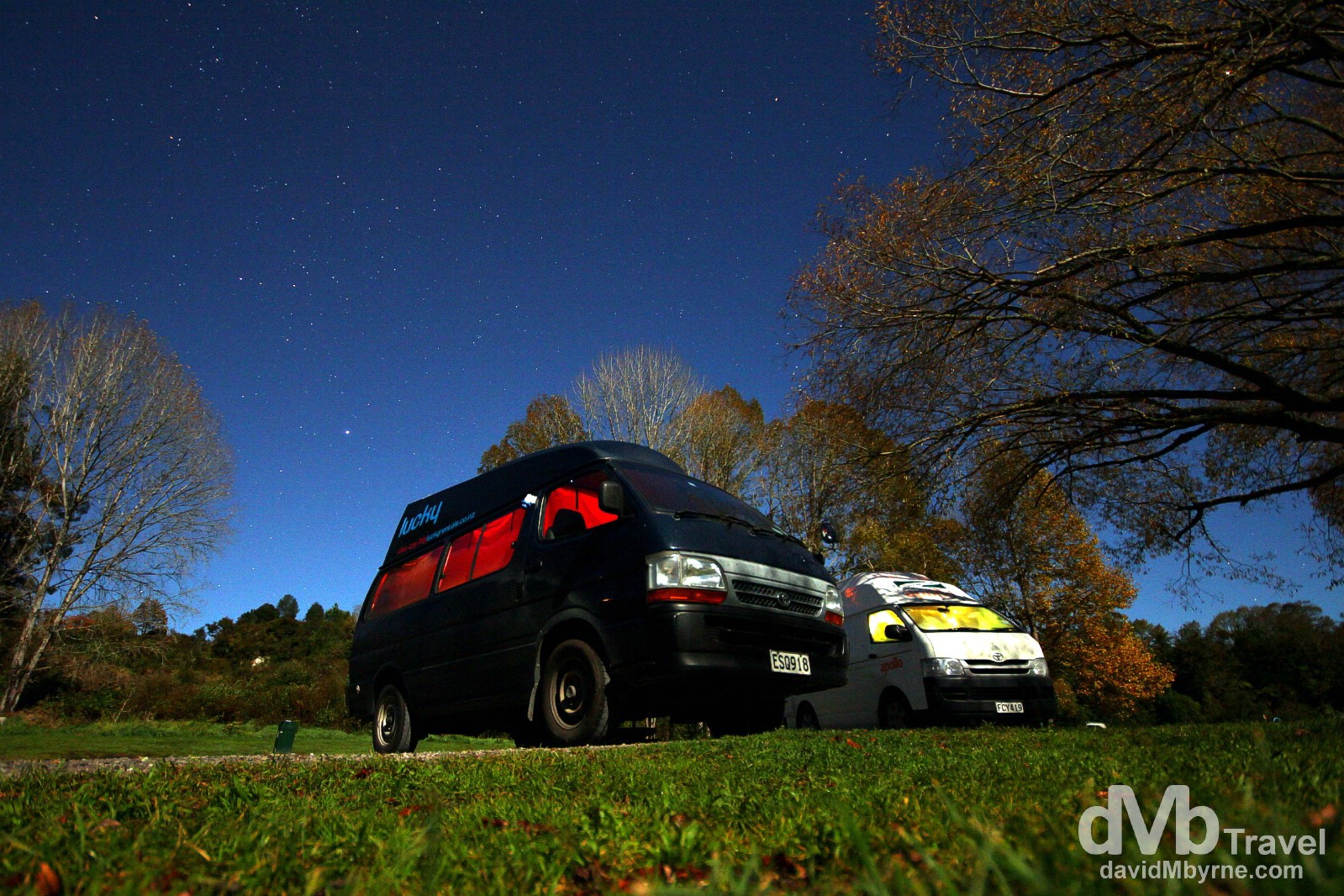 Home. An extended exposure (15 second) image of Wilma, my camper van (she’s the blue one) parked by the Waikato River in Reid’s Farm campsite on the outskirts of Taupo. That nice clear sky might have been photogenic but it also meant it was a cold night, the coldest I’d experienced on this trip to New Zealand. And with no power available it was a wear-everything-you-have-to-bed kind of night. Oh, the joys of camper van life during a New Zealand Autumn/Fall. Reid’s Farm Campsite, Taupo, North Island, New Zealand. May 6th 2012