Tongariro National Park, slap-bang in the volcanic centre of New Zealand’s North Island, was established in 1887 as New Zealand’s first national park. Today it is a UNESCO-listed World Heritage site which has the distinction of dual status, one of only 29 of UNESCO’s 981 sites total (as of 2013) to have been acknowledged for both its natural and cultural significance. It is probably the most famous of New Zealand’s 14 National Parks, & definitely its most spectacular. 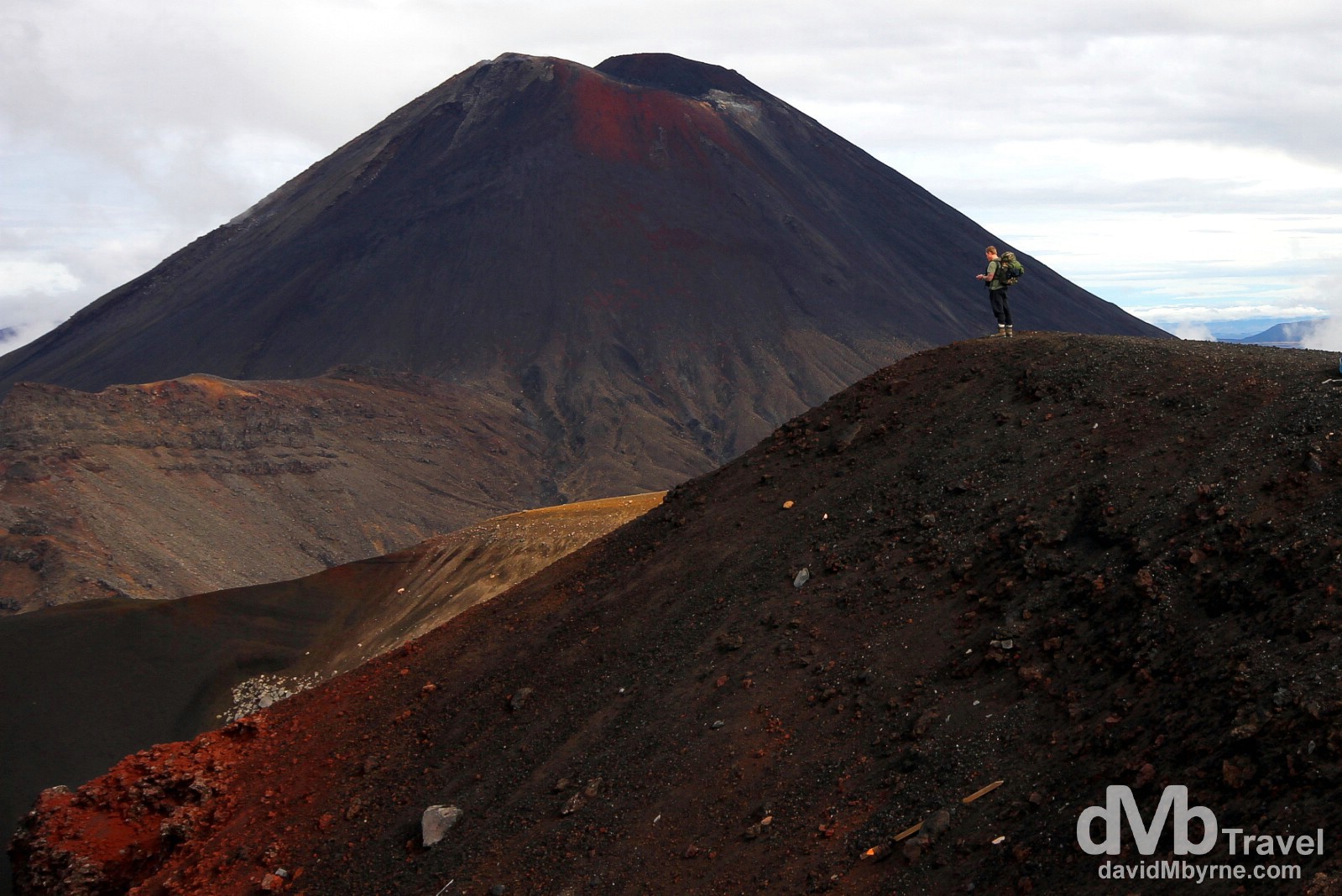 The Crossing
Put simply, the Crossing is a 19.4-kilometre, up-across-down walk between two points A & B, points which traverses Mount Tongariro while in the process taking trampers through some of the most amazing volcanic topography found anywhere on earth. You need what I would class as a standard level of fitness & stamina to complete route. The majority of the crossing is through raw volcanic terrain, with sharp-edged new volcanic rock or loose & shifting tephra underfoot. In areas it can be heavy going & at all times you’re fully exposed to elements, which can, as I found, change quickly – at these elevations it can get dangerous & it’s for this reason that the New Zealand government, in 2007, officially slotted the word ‘Alpine’ into the crossing’s official name (until then it was simply known as the ‘Tongariro Crossing’) to better reflect the terrain & to warn the many poorly equipped/informed trampers of potential hazards, mostly weather related (although the route does traverse the crater of an active volcano so fiery surprises, while rare, are not unheard of).

A-B or B-A?
Points A & B are two car parks situated 19.4 kilometres, and some 8 hours walking, apart – the Ketetahi car park (800 metres/2,624 ft) & the Mangatepopo car park (1,100 metres/3,608 ft). Trampers are typically dropped off at one point early in the morning and collected from the other later that afternoon – that’s the standard formula. The Crossing can be completed in either direction – A to B or B to A – but the majority of Tongariro trampers walk from Mangatepopo, on Mount Tongariro’s southern flank, to Ketetahi, on its northern flank, because the higher starting elevation at Mangatepopo means less uphill walking overall. I, however, walked from Ketetahi to Mangatepopo, subjecting myself to more uphill walking as a result. It is said that doing this adds typically another 1 hour to the estimated 8-hour tramp, although I clocked a time of less than 7 hours, 6 hours 45 minutes to be precise, even going the more taxing direction (& with more than ample stops en route for sustenance & to marvel at the vistas). I was happy with this, happy to complete the crossing at all & be treated to what I was treated to. But only because it didn’t look good from the outset. It didn’t look good at all. 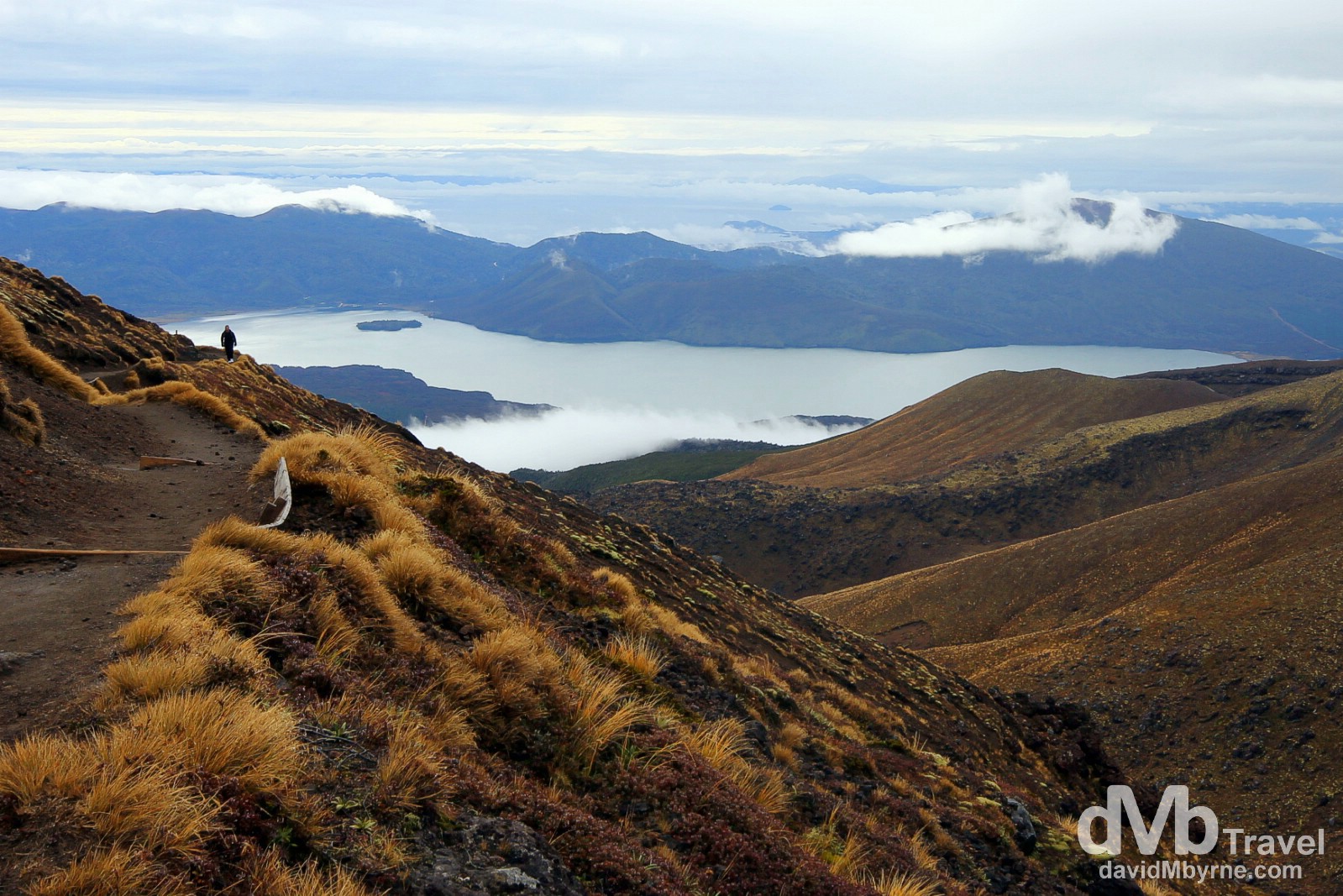 11:15 || When I set out at 08:15 from Ketetahi car park it was raining. It was very gloomy. I didn’t hold out too much hope of it clearing but I took a gamble & went on regardless (‘I’m here now so I may as well’ was the logic). For 2.5 hours after setting out I walked up the northern flank of Mount Tongariro, first through native forest & then through a vast expanse of hilly scrub & tussock (seen here), the only section of the crossing to feature vegetation. My spirits were high but I was (very) wet, cold & somewhat miserable. But then, & at about 11:00, the rain stopped (hence why I was able to take my camera out) &, more importantly, the clouds started to lift. This picture was captured at 11:15. With the rain having dissipated (thankfully never to return on this day), & the clouds in the process of doing likewise, I was treated to amazing views back to the north of New Zealand’s North Island with Lake Rotoaria &, further in the distance, the southern end of Lake Taupo prominent. Very shortly after taking this picture, of a fellow tramper on the Crossing, the vegetation disappeared altogether, as did the climb, & I entered the volcanic wonderland that is the crossing’s high-elevation plateau, the central crater of Mount Tongariro. If conditions hadn’t have improved when they did, or if I had of set off any earlier than I did, then I would not have been treated to this vista at all (the window of opportunity was that tight). And what a travesty that would have been. Tongariro Alpine Crossing, Tongariro National Park, North Island, New Zealand. May 9th 2012 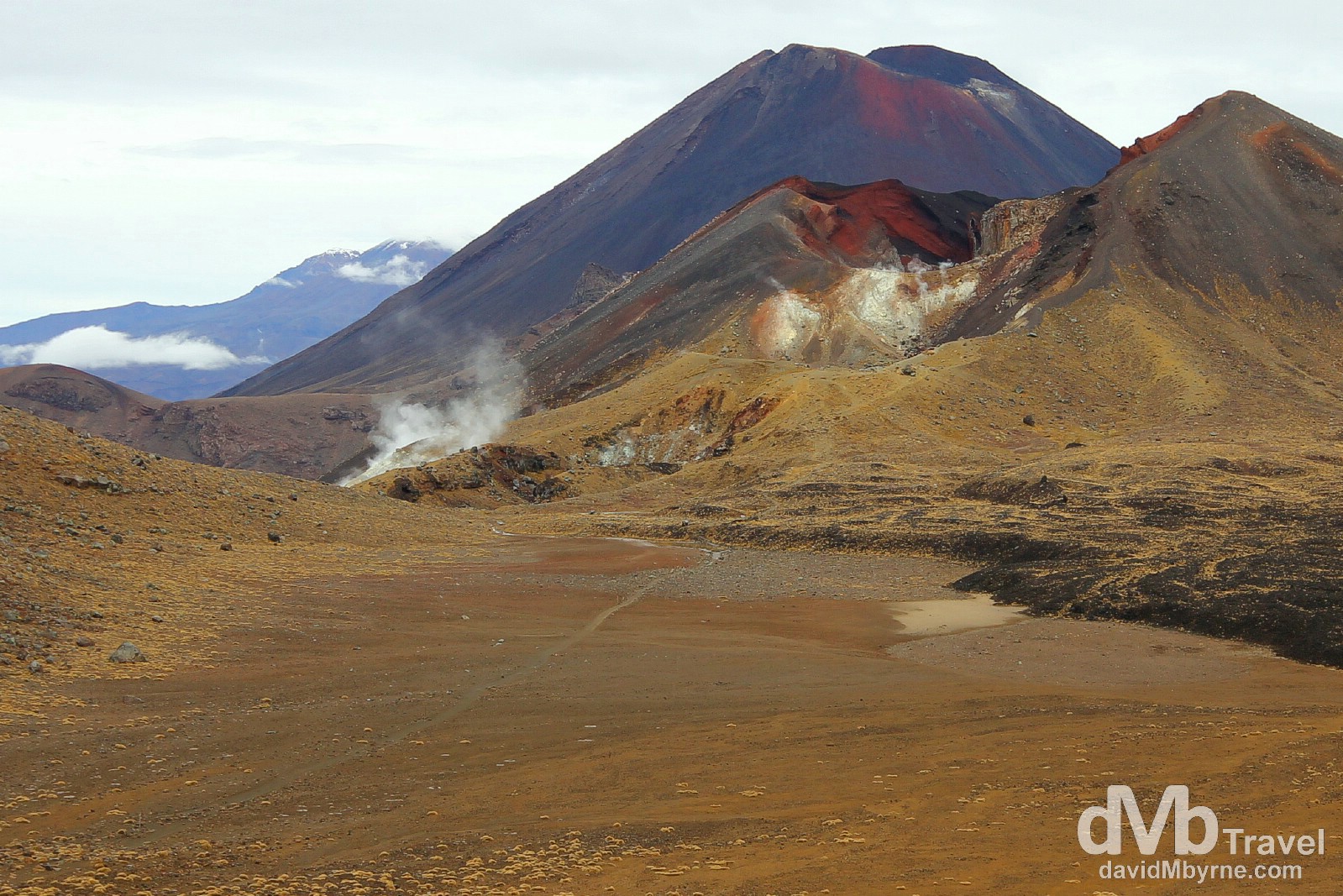 11:48 || Leaving the scrub & tussock of Tongariro’s northern flank behind, one enters – and remember, only if going in the less popular Ketetahi car park to Mangatepopo car park direction – the main area of the crossing, the vegetation-free, high-altitude central crater of Mount Tongariro, a wondrous Martian-esque volcanic wonderland of peaks & dotted with volcanic lakes & active steam vents (called fumaroles). Underfoot it’s all loose volcanic pumice, shale & dust. This is the view from near the large volcanic Blue Lake (1,725 metres/5,659 ft), a prominent feature in the area, looking across Mount Tongariro’s central crater to the 1,886 metre (6,188 ft) Red Crater (top-right), the highest point on the Crossing, & in the distance the 2,287 metre (7,503 ft), perfectly conical Mount Ngauruhoe. The walk from here across the central crater, via the clearly visible path in the foreground, to the Red Crater takes about 45 minutes, with the final, (very) slow slog up the crater edge to the Red Crater summit the hardest part of the whole 19.4 kilometre Crossing (and needless to say it’s an easy downhill hop, skip & jump if walking the opposite, more popular direction). Tongariro Alpine Crossing, Tongariro National Park, North Island, New Zealand. May 9th 2012 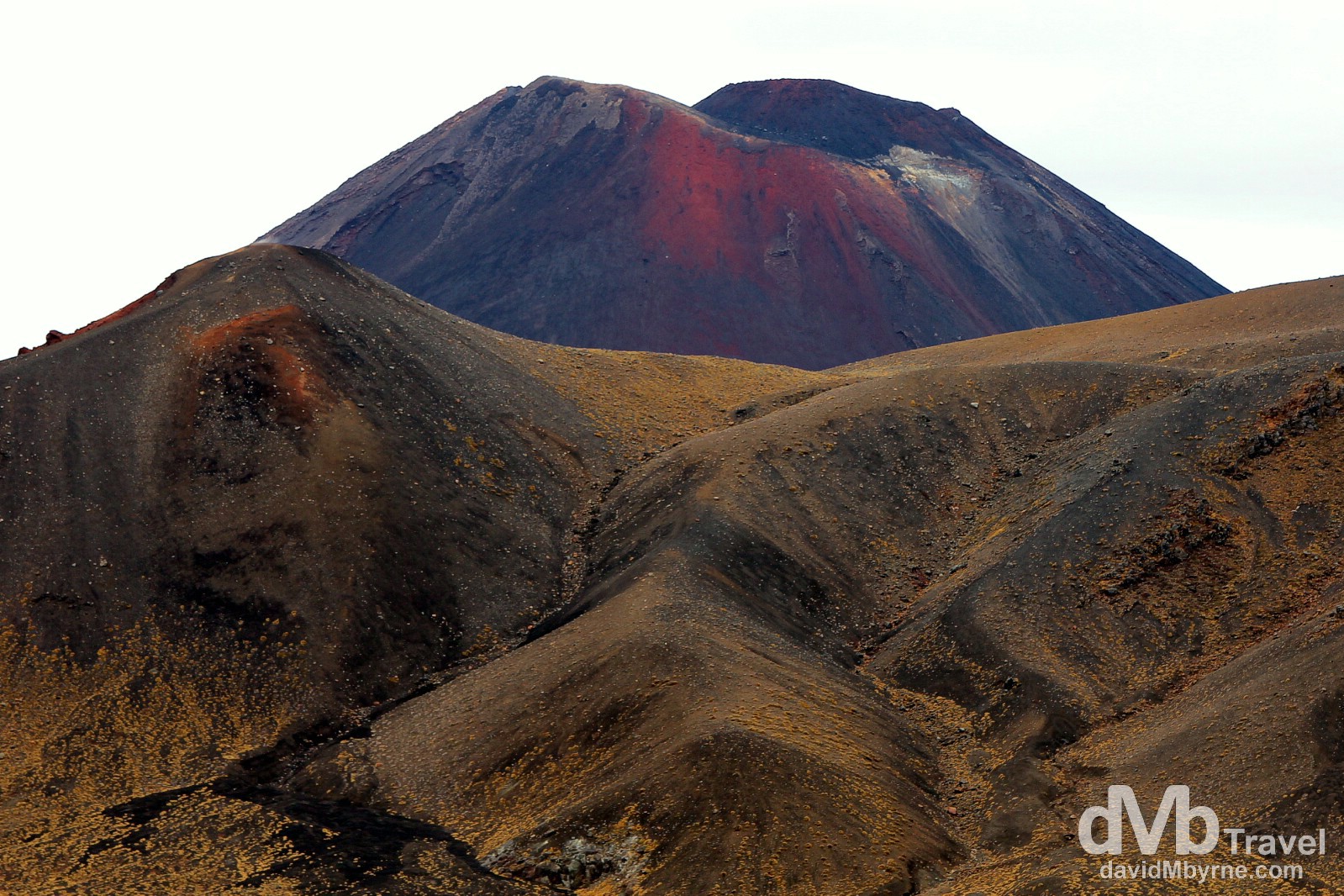 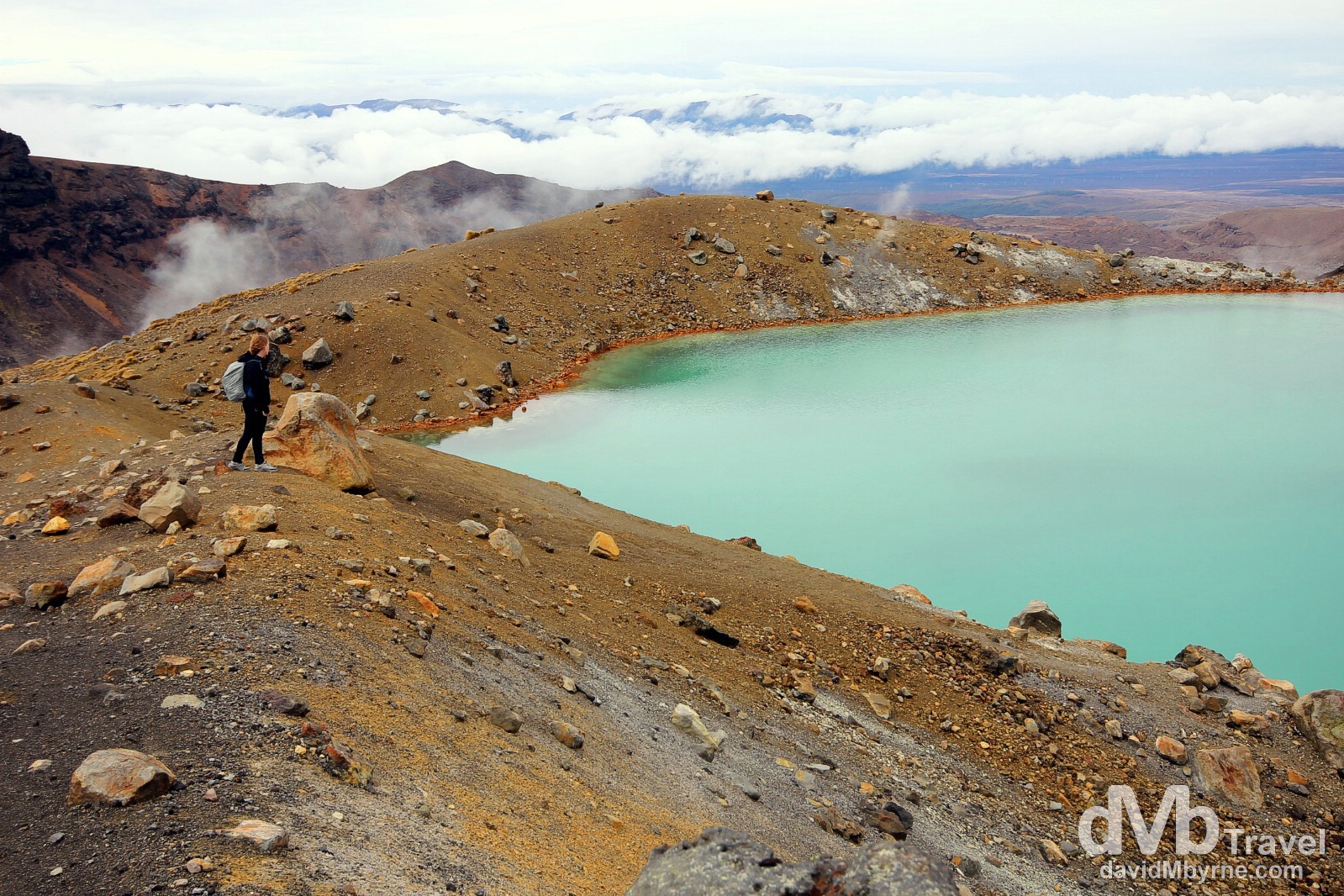 12:25 || Standing by one of the Emerald Lakes near the base of Red Crater in Tongariro National Park. This is a highly active volcanic region, the most active of the Crossing. Large amounts of minerals are brought to the surface, minerals that are visible in the colours of the rocks and ridges seen here. Also, active steam vents (fumaroles) abound, constantly emitting steam and sulphur dioxide gas into the air and depositing yellow sulphur specks around their edges. The famous lakes and pools on the Crossing are deeply coloured by the volcanic minerals dissolved in them, as seen here at one of the Emerald Lakes (1,730 metres/5,635 ft). A short but very taxing, steep scramble from here on very loose tephra gets one to the 1,886 metre (6,188 ft) Red Crater summit, the highest point on the Crossing. I took this picture just before I stowed my camera in preparation for the summit ascent. Tongariro National Park, North Island, New Zealand. May 9th 2012.

Video || The Scramble to the Red Crater Summit

Video of a section of the final taxing scramble up to the Red Crater with views & commentary of the track just walked. Excuse my video skills. Needless to say I’m more comfortable with stills. Excuse my commentary ignorance too – I describe Red Crater itself as “some sort of a huge volcanic crater”. Umm. 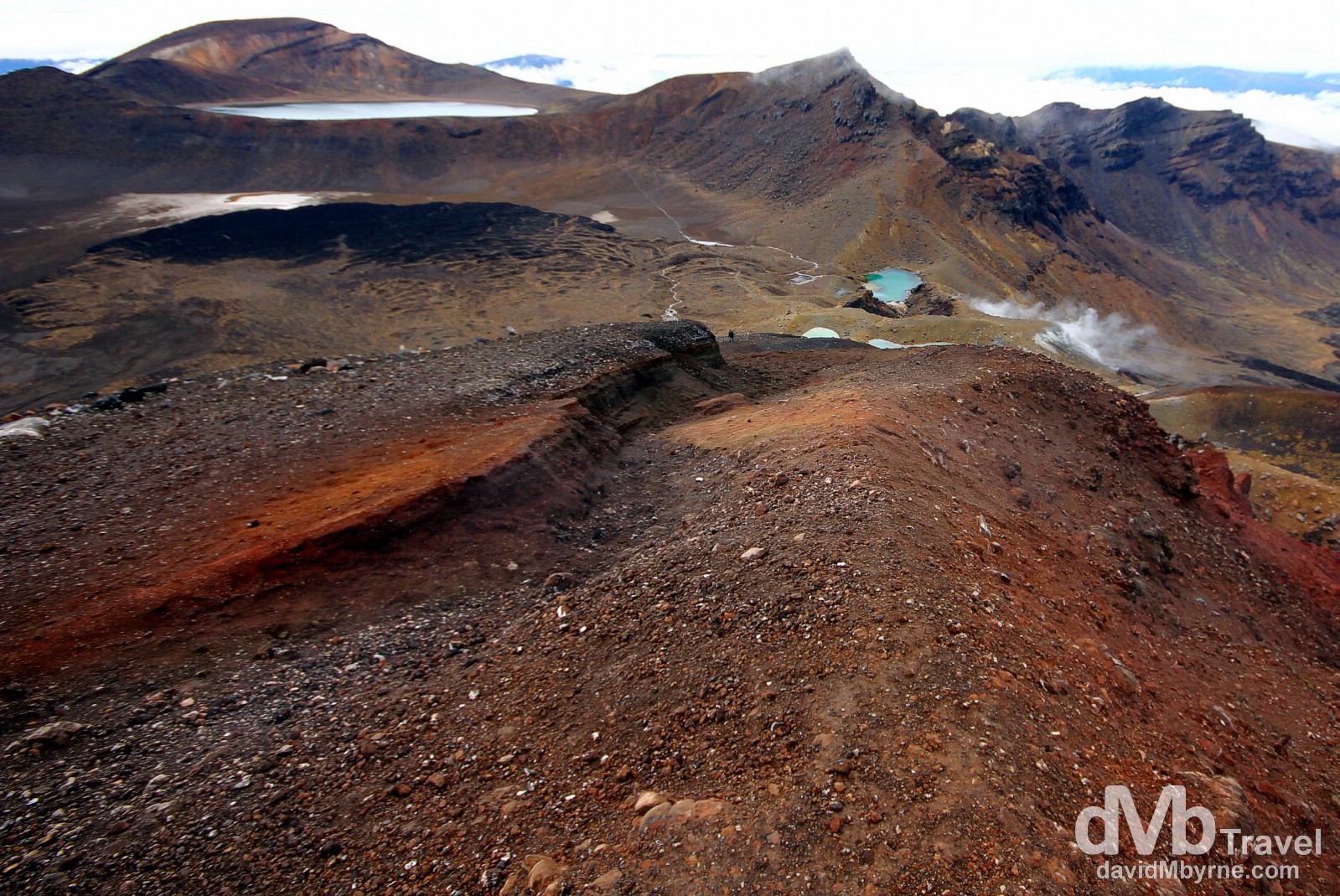 12:45 || The view back towards the Mount Tongariro crater showing the Emerald Lakes (right) & Blue Lake (left) as seen from the highest point on the Tongariro Alpine Crossing, the 1,886 metre (6,188 ft) summit of Mount Tongariro’s Red Crater. The path I walked to get to this point can be clearly seen connecting the smaller Emerald Lakes (1,730 metres/5,675 ft) to the larger Blue Lake (1,725 metres/5,659 ft). Tongariro National Park, North Island, New Zealand. May 9th 2012.

12:55 || Probably my favourite capture of the day today, that of a fellow hiker/tramper surveying the scenery from the edge of Red Crater in Tongariro National Park. Needless to say the views from here of Mount Ngauruhoe in the distance are phenomenal. It’s the youngest of the parks three volcanoes &, given its conical appearance, the only one of the three with that classical, storybook volcano look, so much so that it was used as fictional Mount Doom in The Lord of The Rings trilogy. Tongariro National Park. North Island, New Zealand. May 9th 2012. 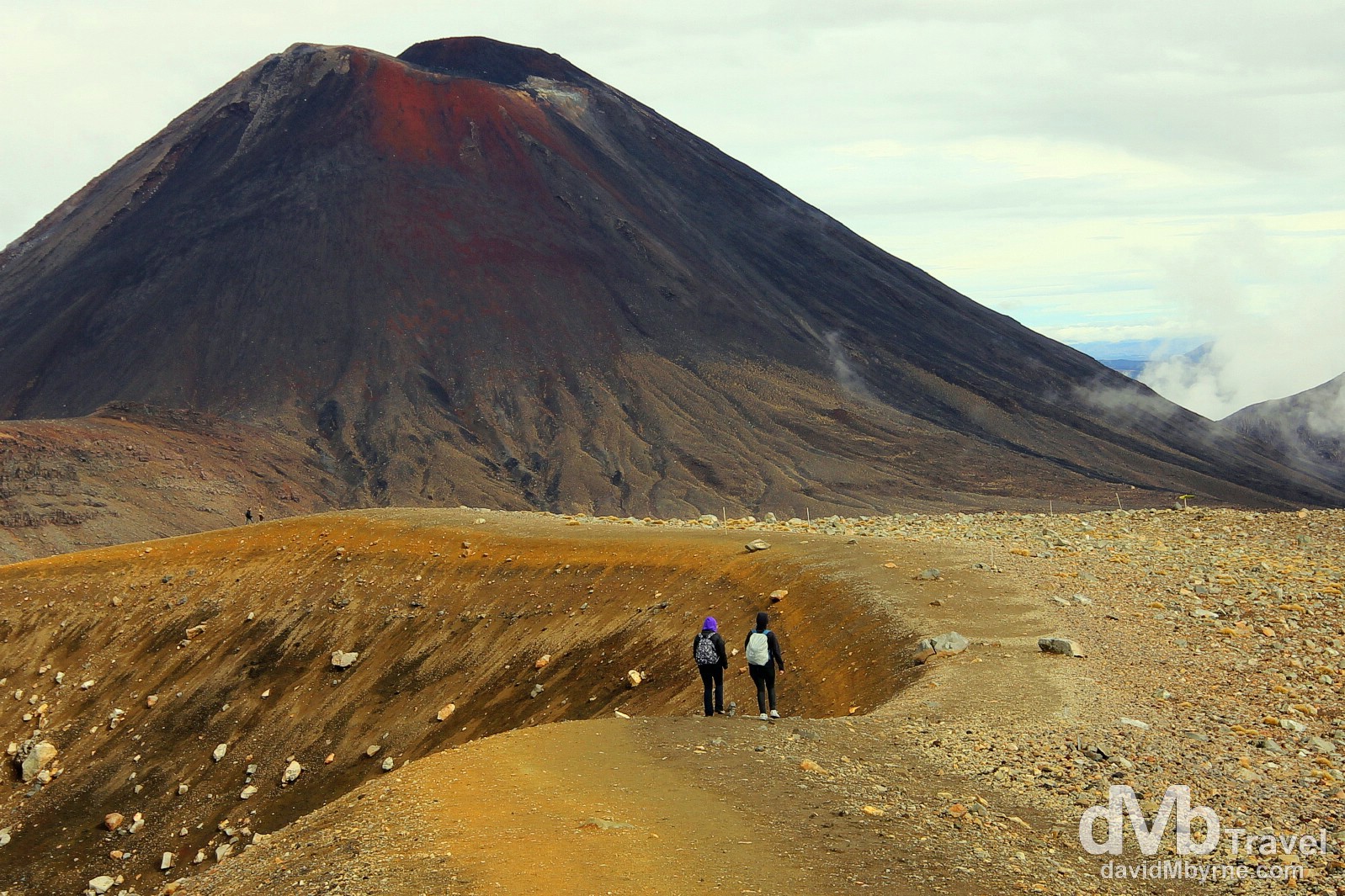 12:57 || It’s all downhill from here. Descending from Red Crater. At this stage, a little under 5 hours into the 7-hour tramp, the Crossing – and again if going in the less popular Ketetahi car park to Mangatepopo car park direction – descends down into Mount Tongariro’s South Crater (1,650 metres/5,413 ft) skirting the base of Mount Ngauruhoe – a detour off the main Crossing route to Ngayruhoe’s 2,287 metre (7,503 ft) summit is an option for those with both the the time & energy. From the South Crater the trail then continues to descend to the end of the Crossing at Mangatepopo car park, somewhere I reached at 14:59, 6 hours 45 minutes after I set out, in driving rain, from Ketetahi car park 19.4 kilometres away, thus ending one of the best walking experiences of my life, if not the best. Tongariro National Park, North Island, New Zealand. May 9th 2012.