My five nights in Key West, Florida, have come to an end. I haven’t been the tourist here, more the reveller. I knew coming here that that would be the case, and I was fine with it; I’ve just spent the previous 11 weeks in Mexico & Central America & I had a long-lost friend to catch up with, a long-lost friend who knows way too many Key West watering holes in which amply facilitate such an endeavour (catching up). Blurry nights & groggy mornings aside, it was actually refreshing to not read up on a location & I didn’t feel too guilty about ignoring Key West digitally. The intention pre-arrival was to switch off for a few days and without actually meaning to it seems I couldn’t have picked many better, more laid-back locations on earth in which to do so.

A great place to go to have fun, a difficult place to take life too seriously and the perfect spot to pick up a tan.

I still saw quite a bit of Key West, the oh-so laid-back island at the southernmost tip of the Florida Keys. It’d be hard not to given the island’s petite size – it measures a mere 6 kilometres by 3 kilometres. For such a small place, Key West packs quite a visual & historic punch; the beauty of the island, particularly its abundant wooden architecture, & its historical significance will quickly become apparent to even the most hedonistic of traveller. And there were quite a lot of those around – Key West is firmly on the tourist trail and people seem to come here with having fun as their number one priority. Here are a few pictures from the last few days. They are not particularly good ones & they won’t give much of an insight into the Key West experience but if you can look beyond that then I promise to get back to being a proper tourist in Miami where I arrive later tonight. I just have to pull myself away from Key West first. 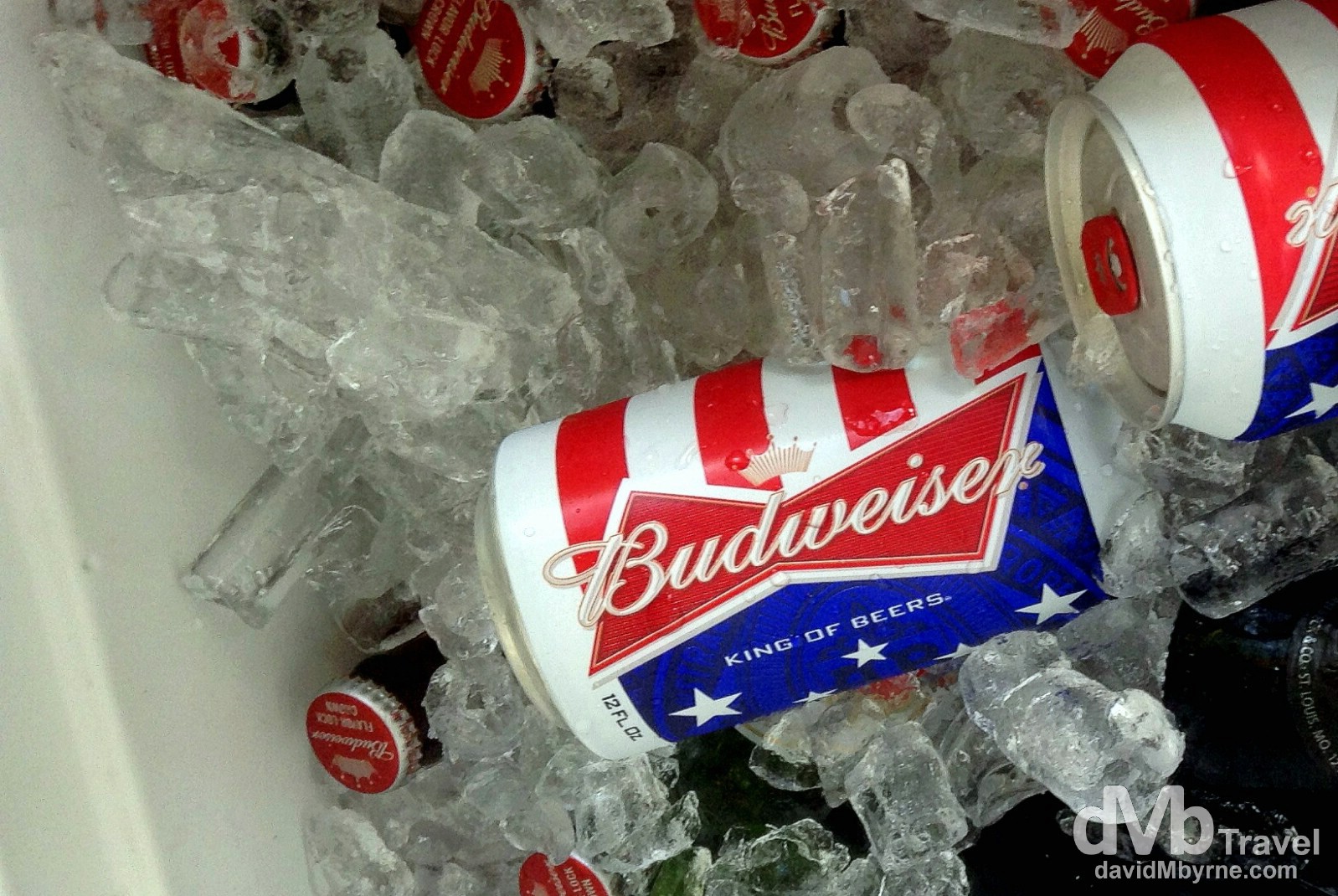 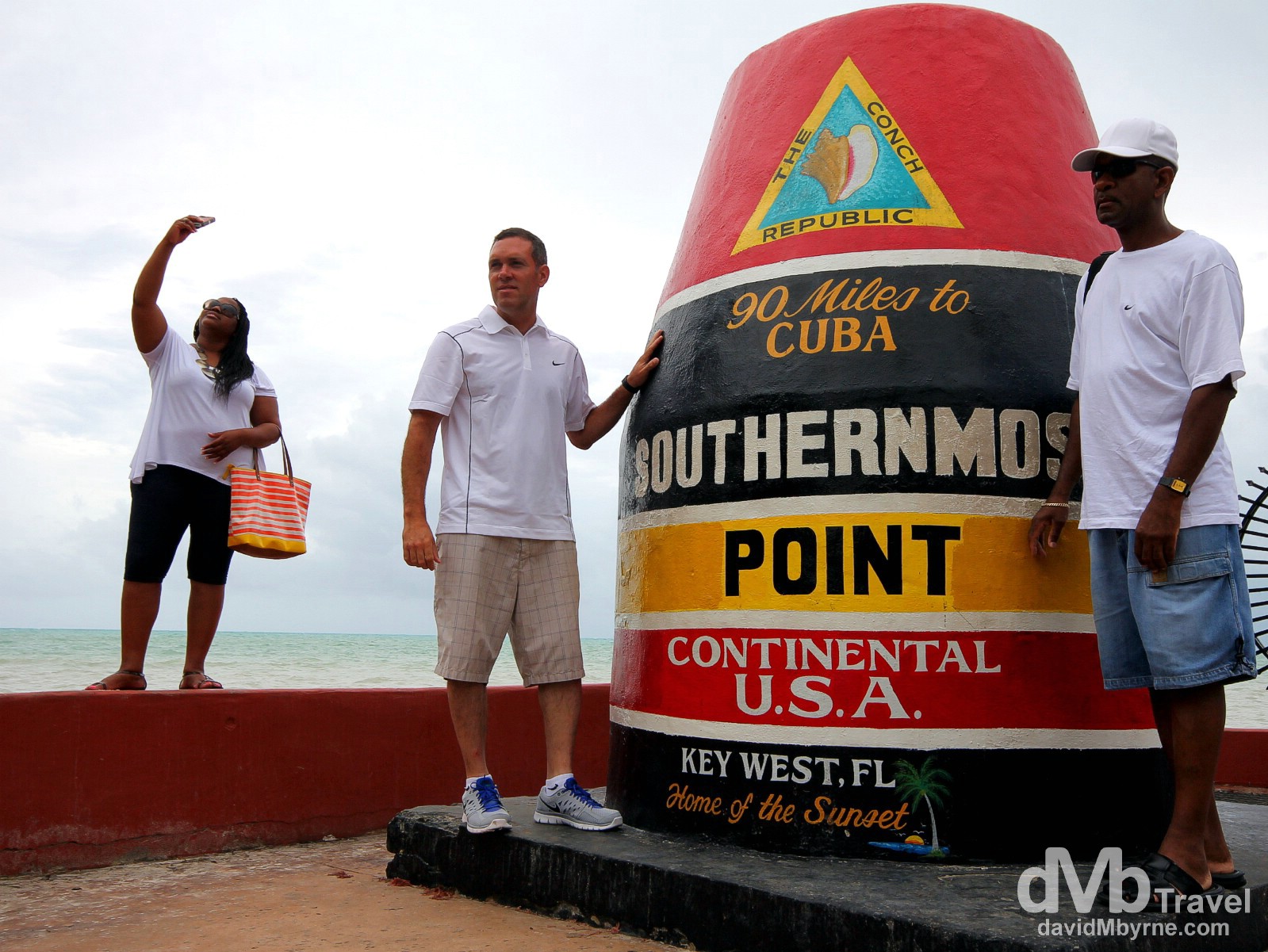 Posing at Southernmost Point, the southernmost point of Continental USA that is. I did take a brief touristy walk around downtown Key West on this particular morning, capturing a pictures of people at what is easily Key West’s number one photo opp – people stand patiently in line up here to have their picture taken here. I wonder how many of them actually knew/knows that this isn’t, emm, the precise geographical location of the southernmost point. That happens to be an inaccessible spot on a military base a few hundred yards away from here. But hey, who’s going to let a small detail like a fact that get in the way of a good tourist attraction. And yes, it is (only) 90 miles to Cuba from here, Key West being closer to Cuba than it is to mainland USA. (Near the real) Southernmost Point in Key West, southern Florida, USA. July 5, 2013.

I sat here for a while looking at people smiling proudly having their picture taken when I came to the realisation that in the previous 4 months I have pinned a virtual travel flag in 3 of the 4 geographical corners of contiguous USA, the 48 adjoining U.S. states on the continent of North America – Seattle (northwest), San Diego (southwest) & now Key West (southeast). And I’m heading northeast, too. 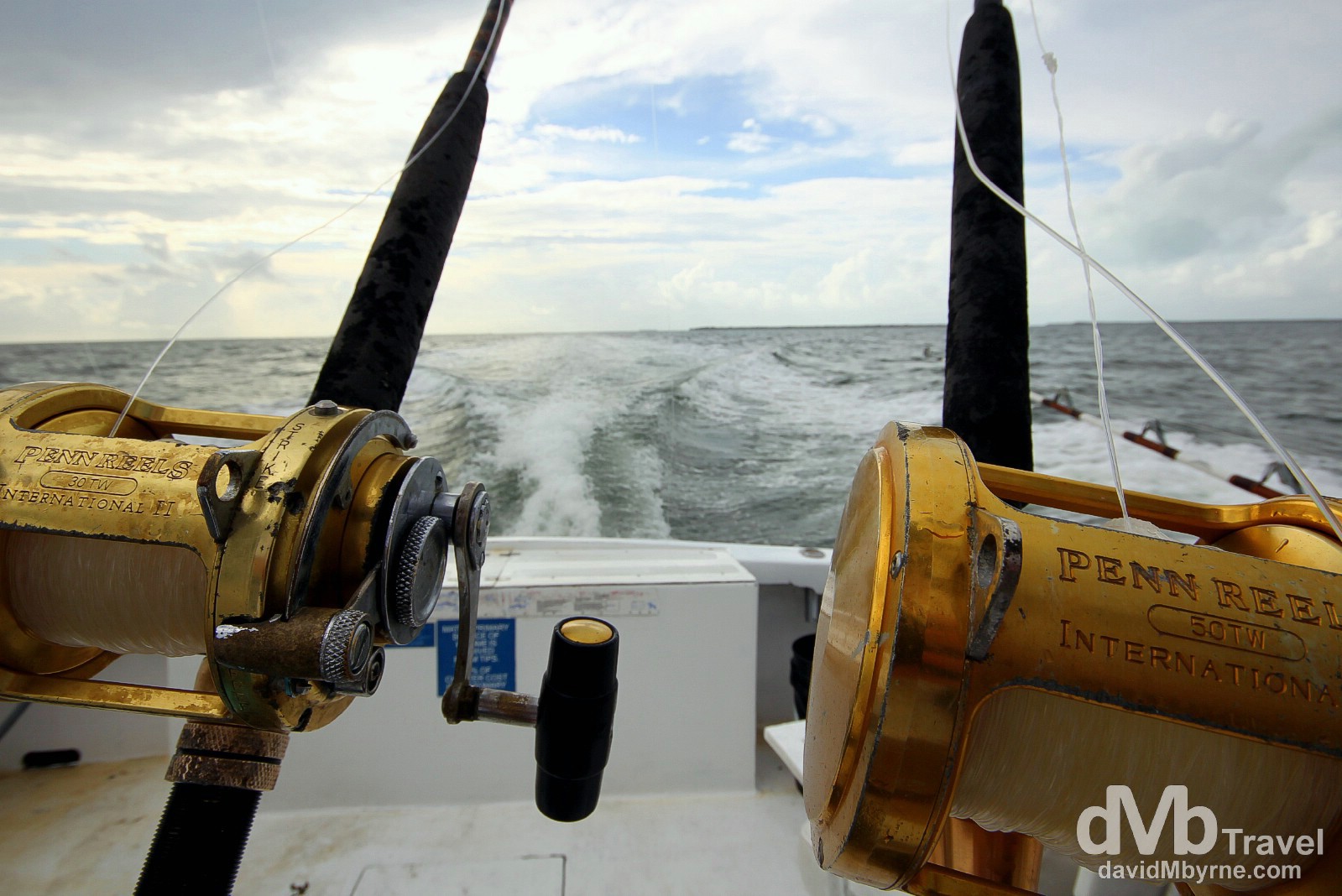 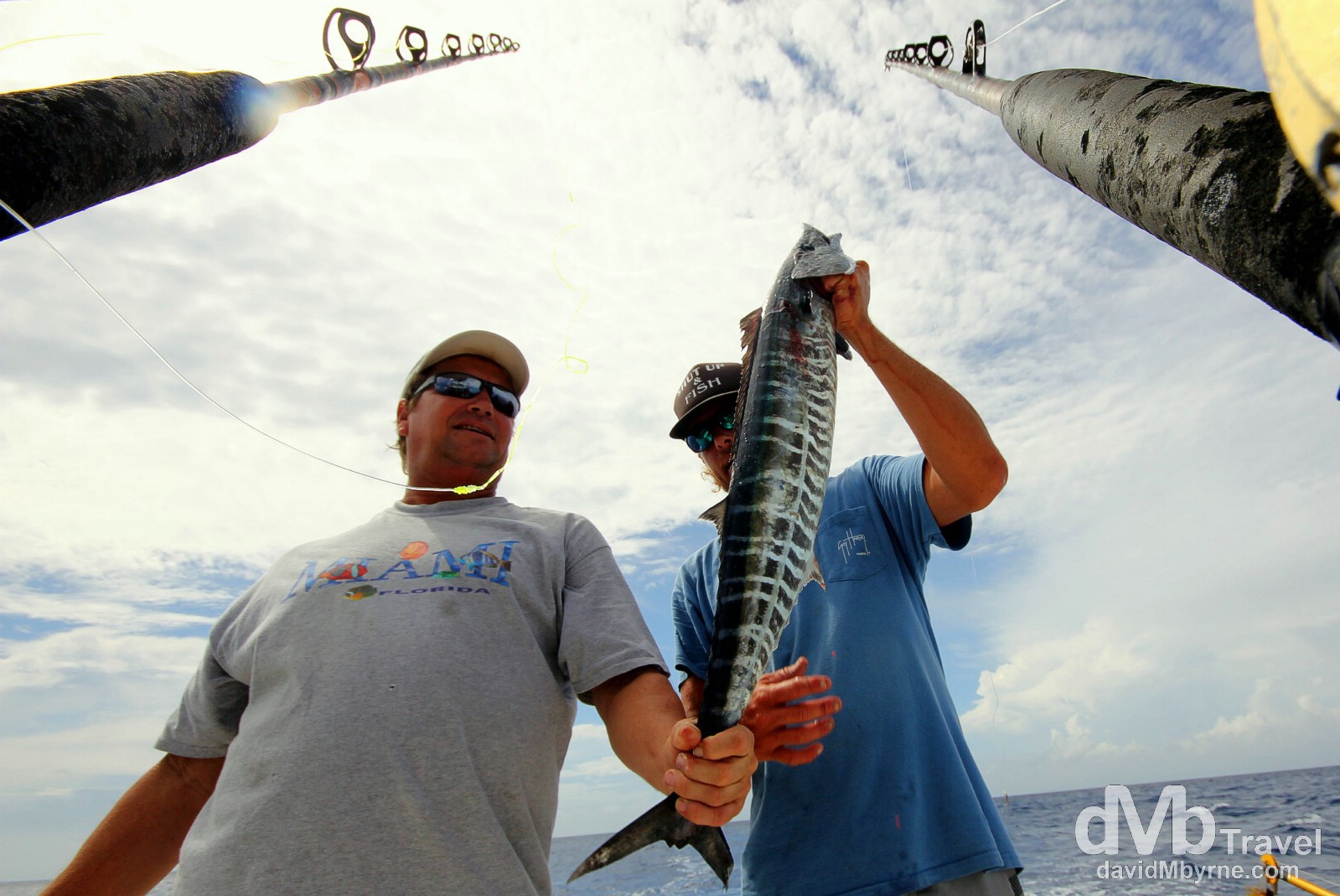 Despite the best efforts of our charter Captain & Ships Mate, there weren’t many fish biting on this day. This was the prize catch from a whole day spent on the water, a (not very big) wahoo, a fast-moving predacious game fish. Fishing off the Florida Keys, USA. July 6, 2013

The following is according to Wikipedia (kind of):

‘In most parts of its range, the wahoo is a highly prized sport fishing catch. It reaches a good size (our one was quite small), is often available not too far from land (we were about 10 nautical miles out), and is a very good fighter on light to medium tackle (he did put up a hell of a fight, feisty little thing). It is known in sports fishing circles for the speed and strength of its first run. However, the aggressive habits and razor-sharp teeth of the wahoo can be of considerable annoyance when targeting larger game fish such as tuna or marlin (next time).’ 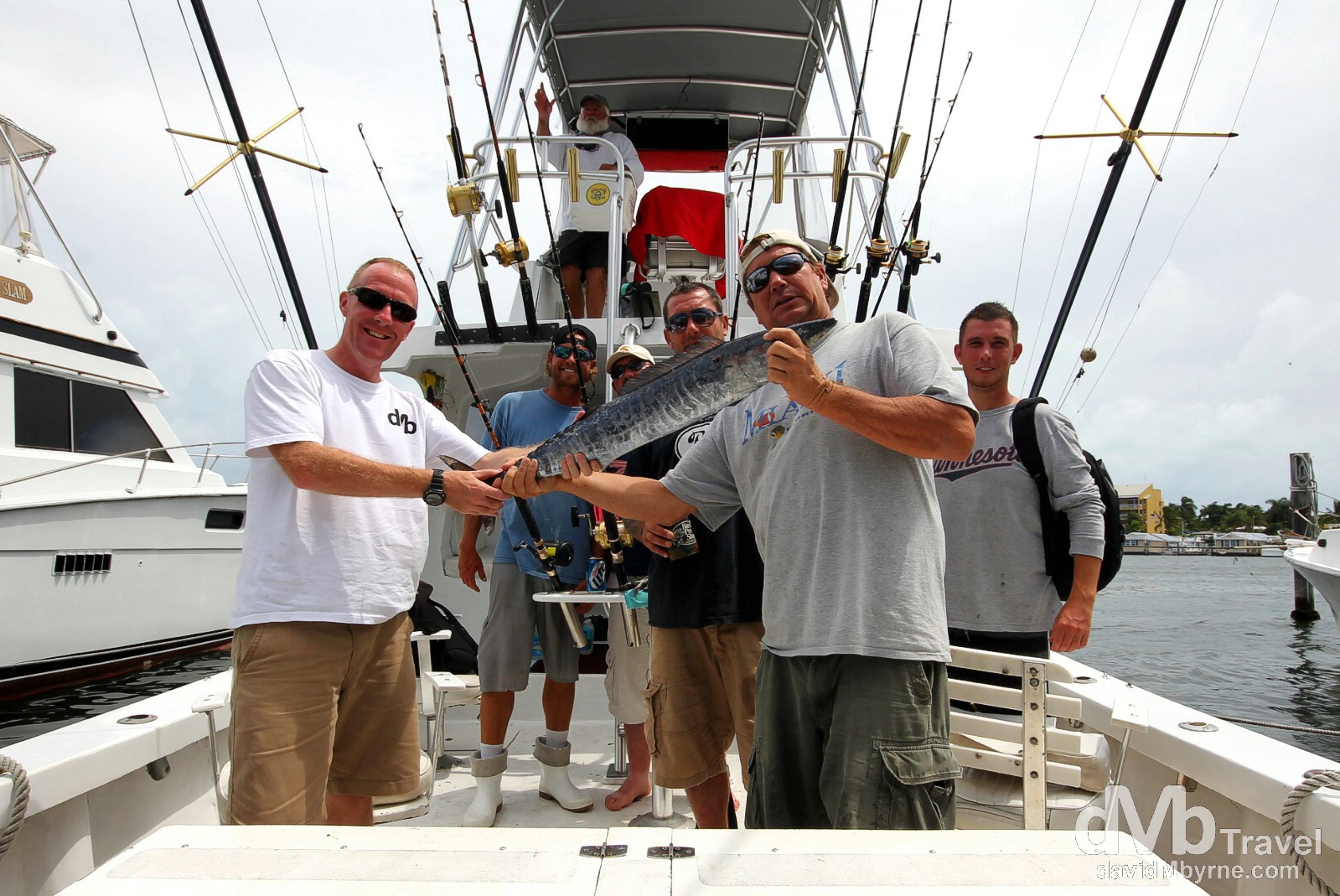 Back on dry land and taking our wahoo with us to a nearby bar for consumption (it was delicious, easily one of the tastiest fish dishes I’ve ever had). Not much big game fishing was done on this 8 hour excursion off the Florida Keys but we brought enough beer to float the boat we chartered thus ensuring that the day was a whopping success regardless – our haul of a single wahoo was a bonus. Key West, Florida, USA. July 6, 2013.