I thought I would have had more time in Miami Beach than it turns out I did have, which was really only one day, today. I arrived late last night off the Greyhound (hey, I’m on a budget here) from Key West and I’m up at stupid o’clock in the morning for a flight north to Baltimore, Maryland. 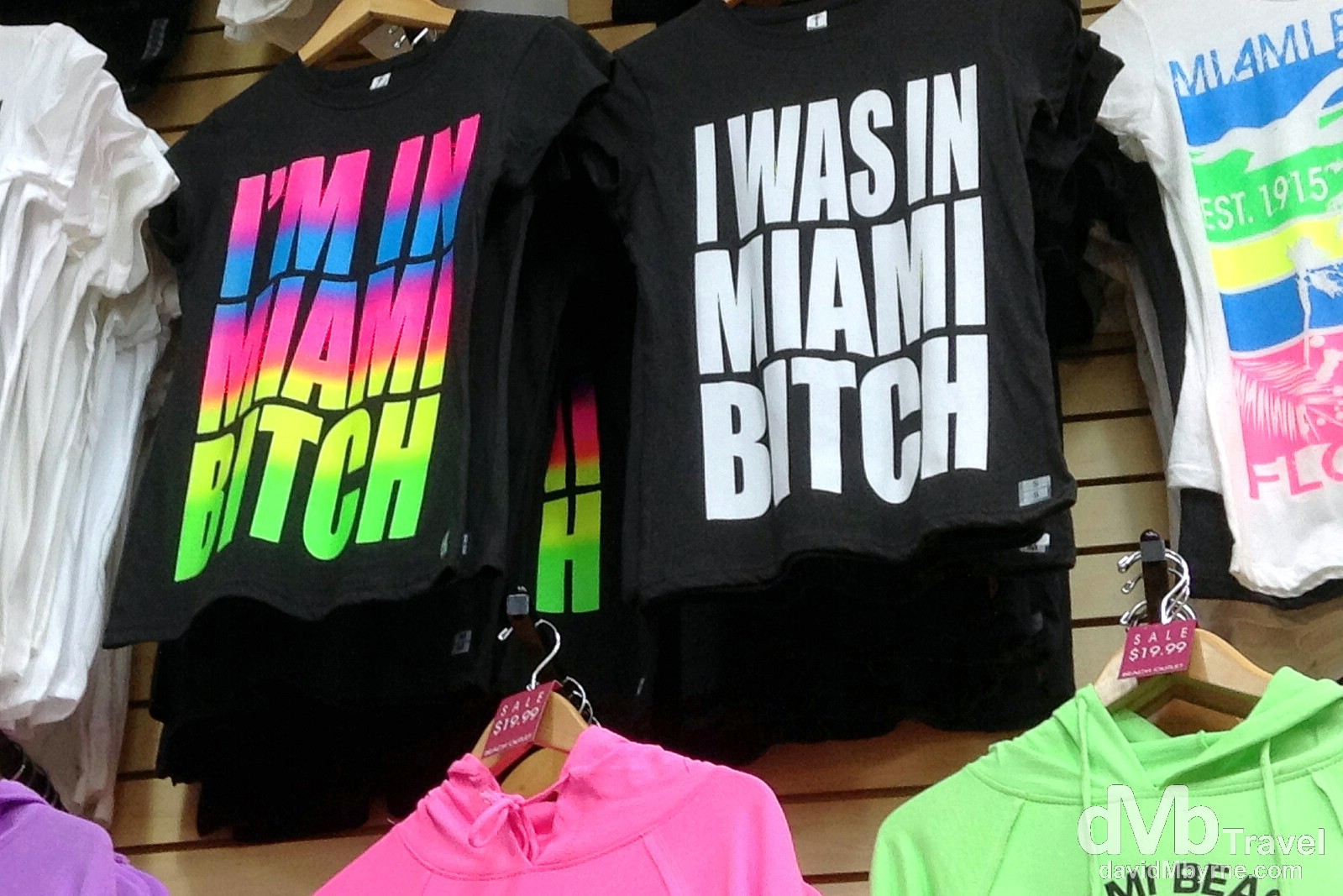 I spent today trying to fit in with the beautiful types that frequent this part of the world. Needless to say I failed miserably. Super-chic Miami Beach, the man-made island in the Atlantic Ocean off Miami, Florida’s biggest & most well-know city, was originally intended as a plantation for growing coconuts. Today it’s one of the most popular tourist destinations in the US & is known as the ‘Billion Dollar Sandbar’ (don’t ask me, something to do with lots of money). There is, & as I have come to discover, more to Miami Beach than just the Art Deco Ocean Drive & South Beach areas, but with limited time at my disposal I was more than happy to spend today checking out both areas, stopping every now and then to take pictures, people watch, & to reality check the fact that I was in Miami. 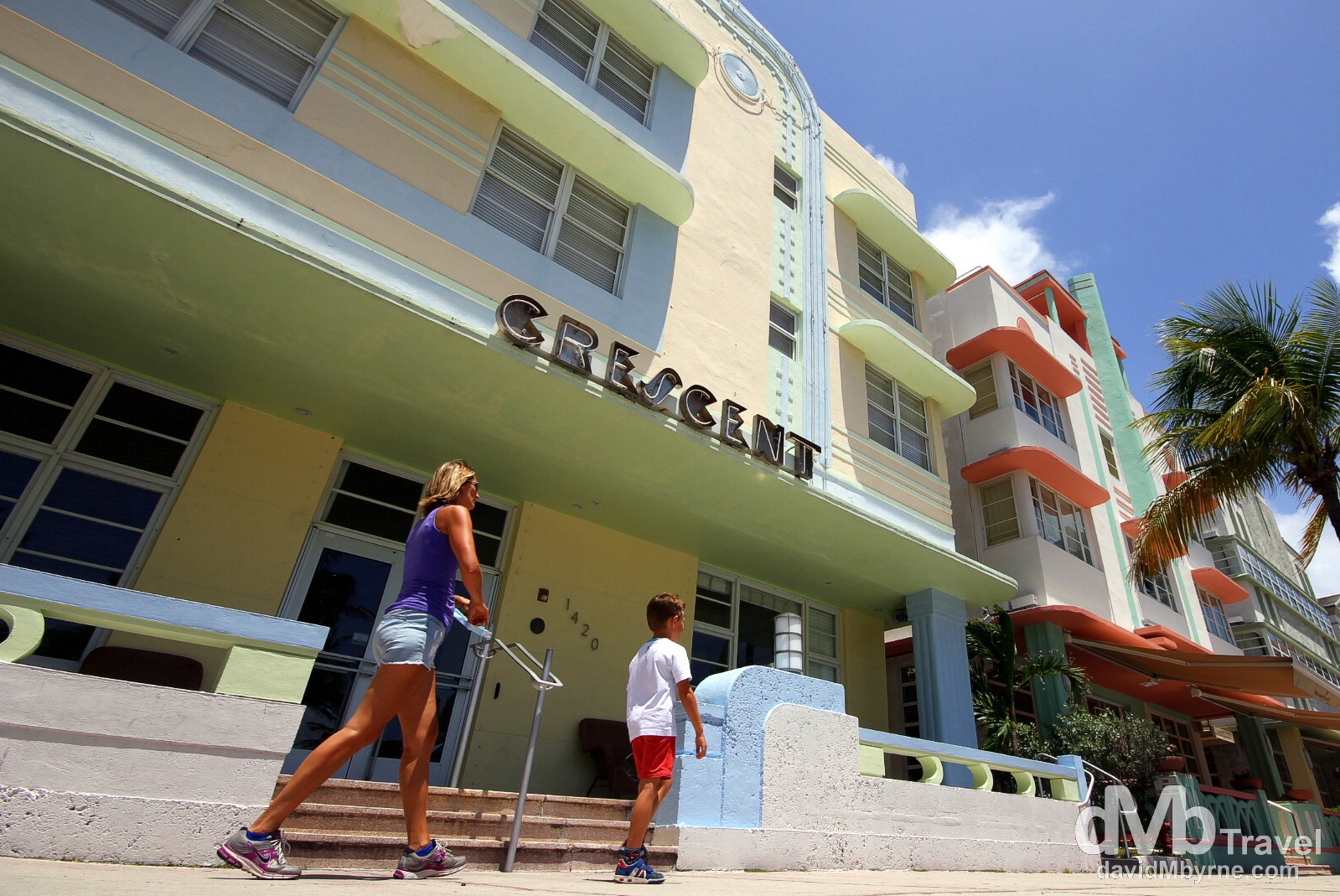 Miami Beach || To-Dos
I dropped into South Beach’s Art Deco Welcome Center on Ocean Drive earlier today, its air-conditioned interior offering a much needed respite from the heat outside. In there I got to reading a pamphlet that touted Miami’s ‘sizzling beaches’, its ‘steamy nightlife’, its ‘elegant shopping malls’, & its ‘world class cuisine’. It mentioned how it – Miami – is a ‘top vacation spot for snowbirds, spring breakers, international tourists & passenger cruise ships’, & how ‘more than 13 million people visited in 2011’ (that’s a lot of people). That same pamphlet wasn’t holding anything back either, going on to warn me, as if I needed warning, that Miami ‘is expensive’ and how ‘just getting past the velvet ropes of a popular club can set you back $300-$400’. Finally, & as for things to do, it recommended to ‘explore the Art Deco scene, lounge on the beach, sip expensive cocktails’, & just ‘be seen.’ I didn’t quite understand the ‘be seen’ bit & I had no intentions of sipping anything except water, but by that stage I had already walked the famous South Beach a few times & had already explored the Art Deco scene, with more explorations to come. 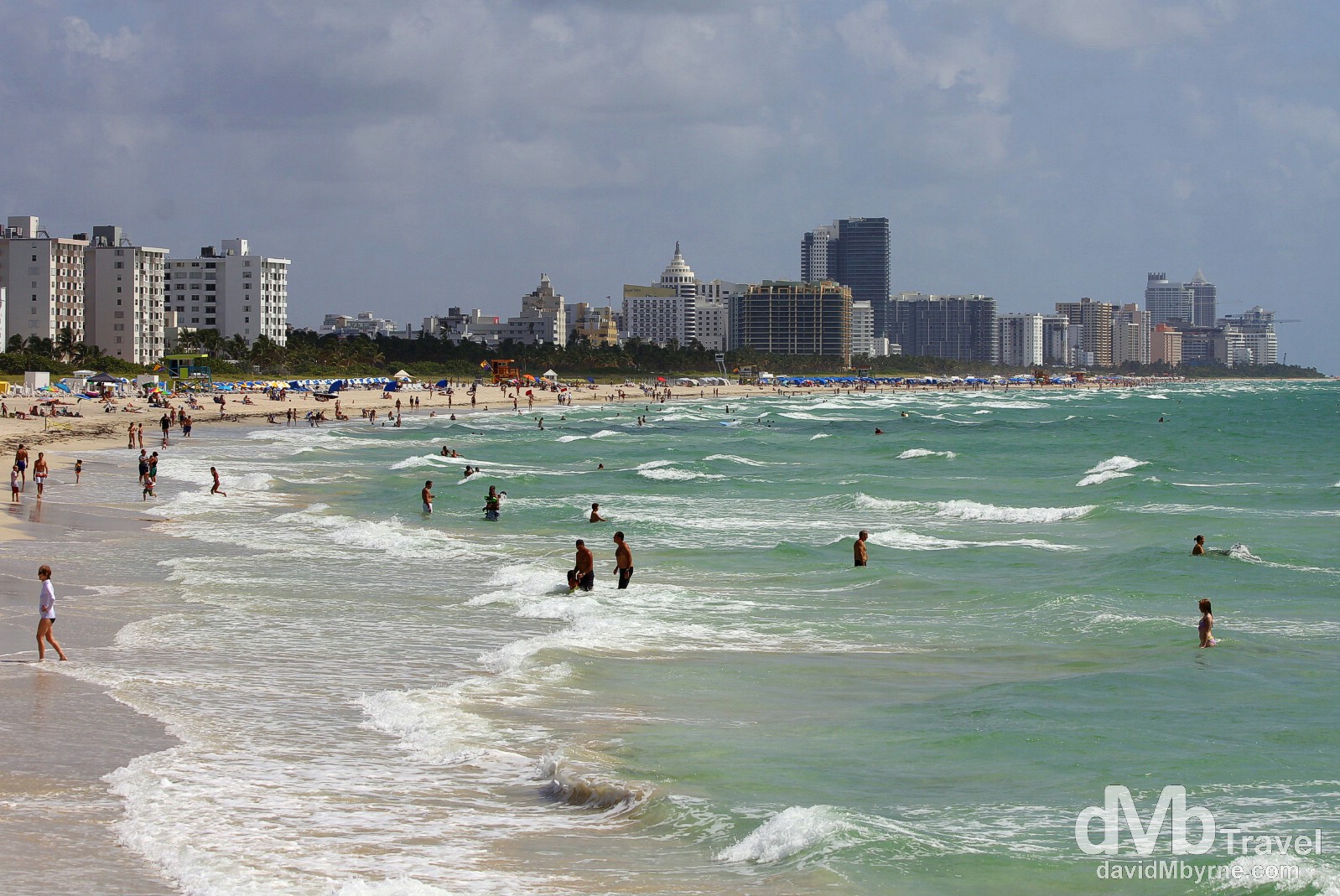 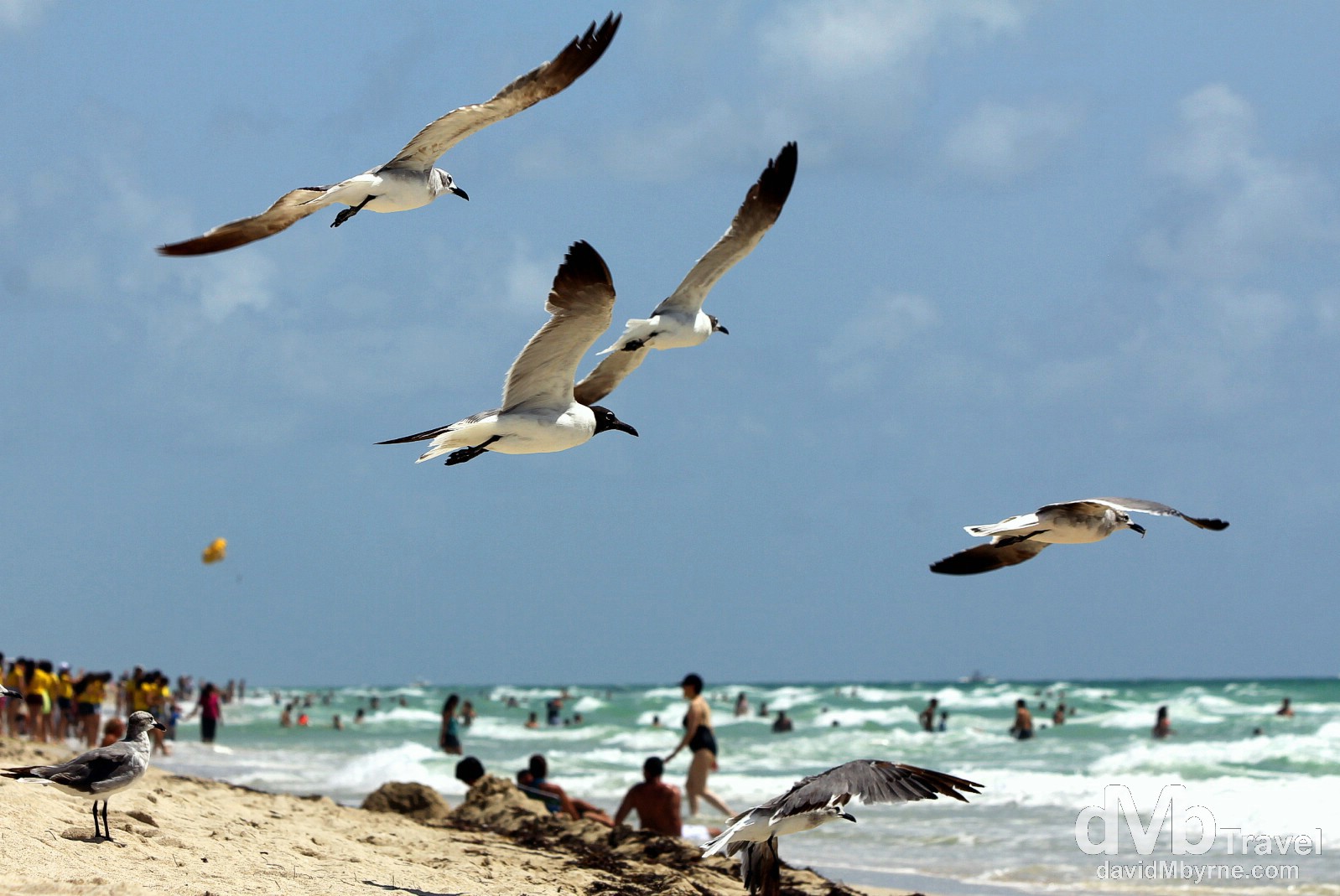 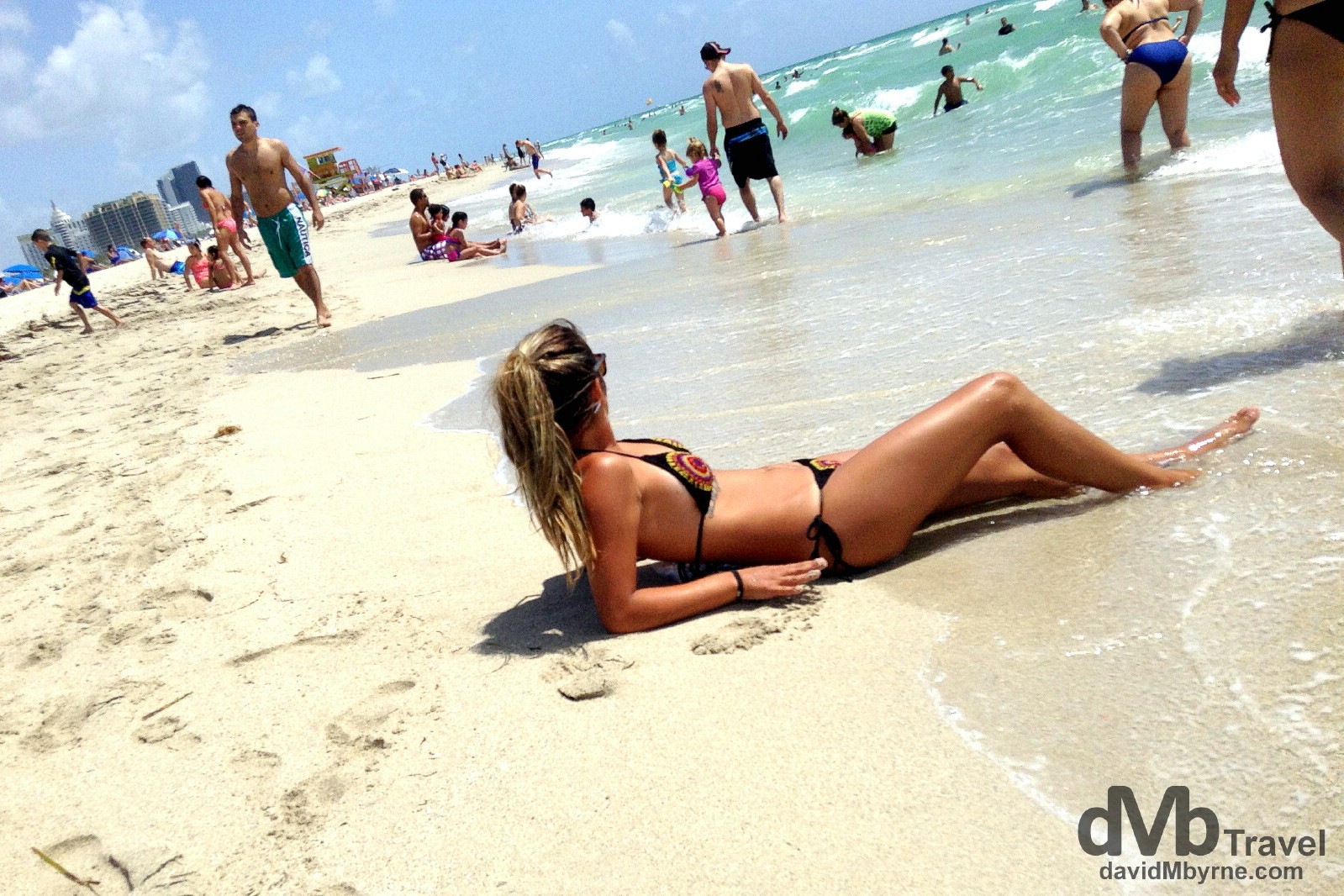 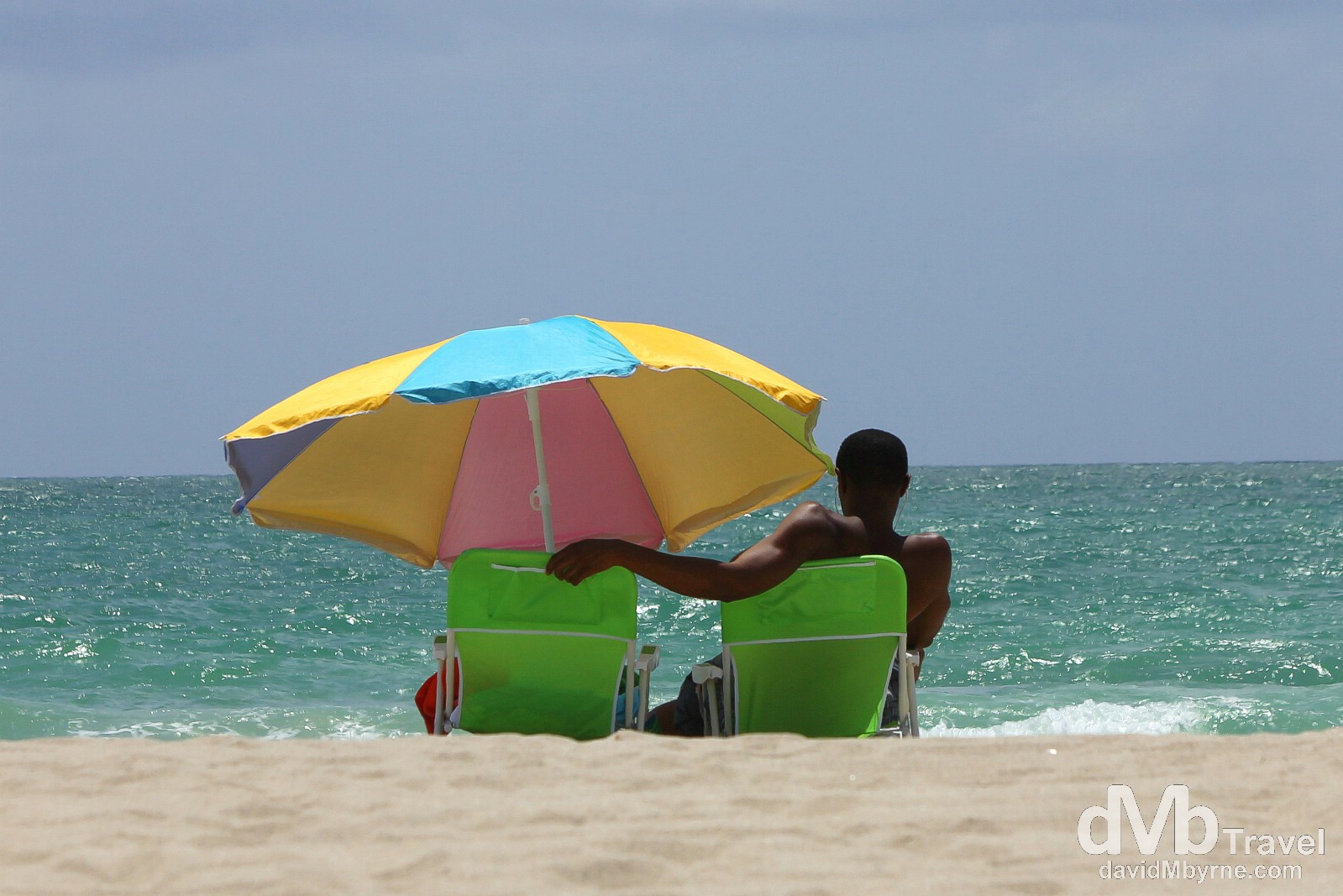 Highly contributing to the popularity of Miami Beach is its Art Deco District, a one square mile area that houses the largest collection of 1920s & 1930s resort architecture in the US, most of which is to be found on the famous Ocean Drive fronting South Beach. Over 800 significant structures, boasting soothing pastel colours, porthole windows, curved walls & distinctive lettering on signs, remain from the Art Deco era, a period in which strong (mostly pastel) colours dominated & modern materials such as stainless steel and chrome were utilised in combination with straight and geometric shapes. All these aspects have been combined in the making of the sleek, streamline, shiny and flamboyant Art Deco buildings of Miami Beach, prime architectural eye candy. 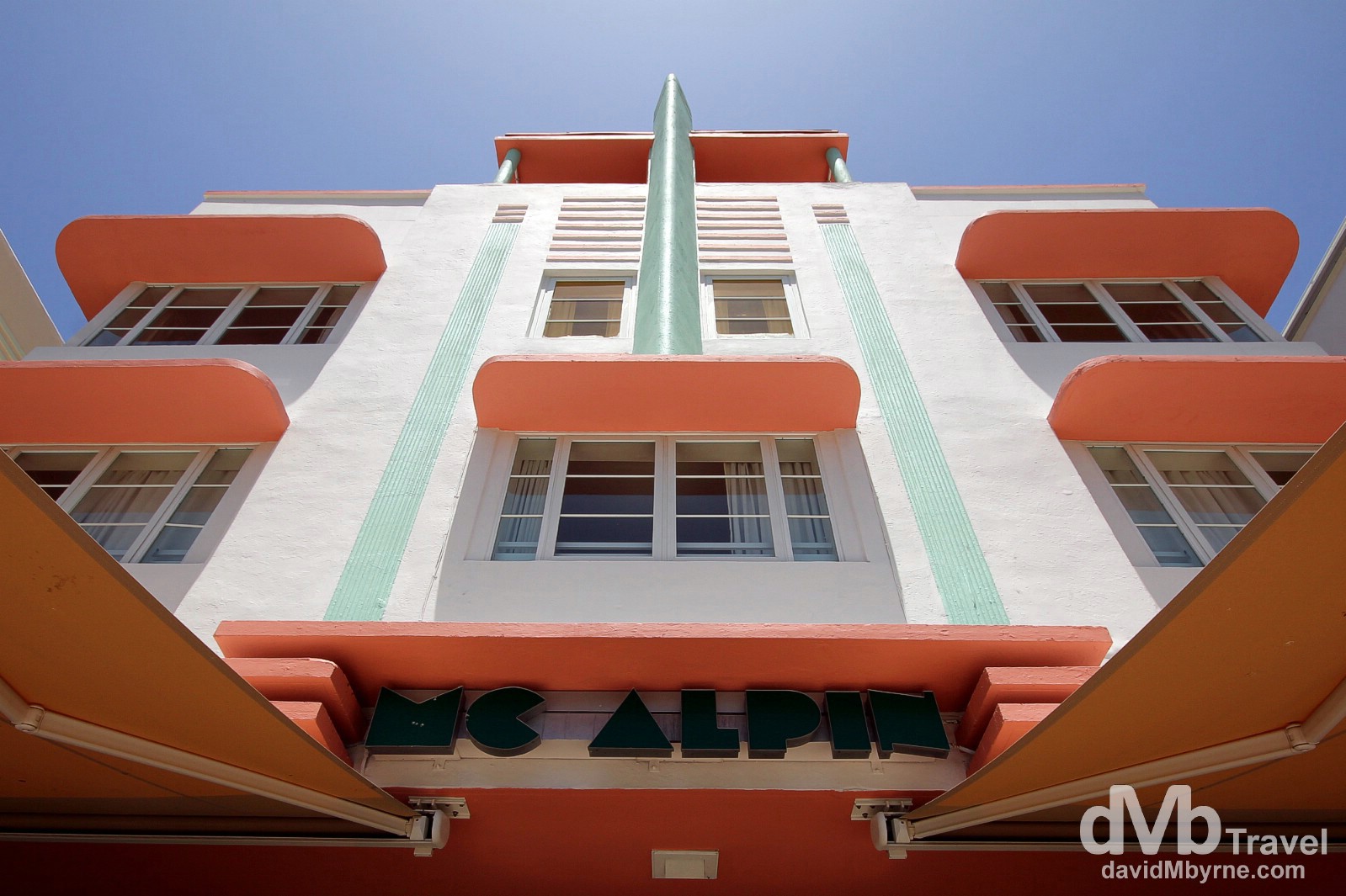 Prime architectural eye candy indeed. The McAlpin Hotel, located at 1424 Ocean Drive, is one of the most photographed buildings on beach-fronting Ocean Drive. A perfect symmetrical design with pastel colours and lines stretching the length of the building make it a perfect example of the Miami Art Deco style, not to mention an Art Deco beauty & a photographic treat. Ocean Drive, South Beach, Miami, Florida, USA. July 8, 2013.

Miami Beach’s Art Deco District is an area that embodies the design continuum of the city from its early development period in the 1910s to the construction boom following World War II. In 1979 the district was listed on the National Register of Historic Places, the first 20th Century district to make the list – at the time it was the youngest district to make the list as many of its buildings had not yet reached 50 years of age. The principle architectural styles found here are Mediterranean Revival (late 1910s to 1930s), Art Deco (late 1920s to 1930s), Streamline Moderne (1930s to 1940s) & Miami Modern, or ‘Mimo’ (mid 1940s to mid 1960s). 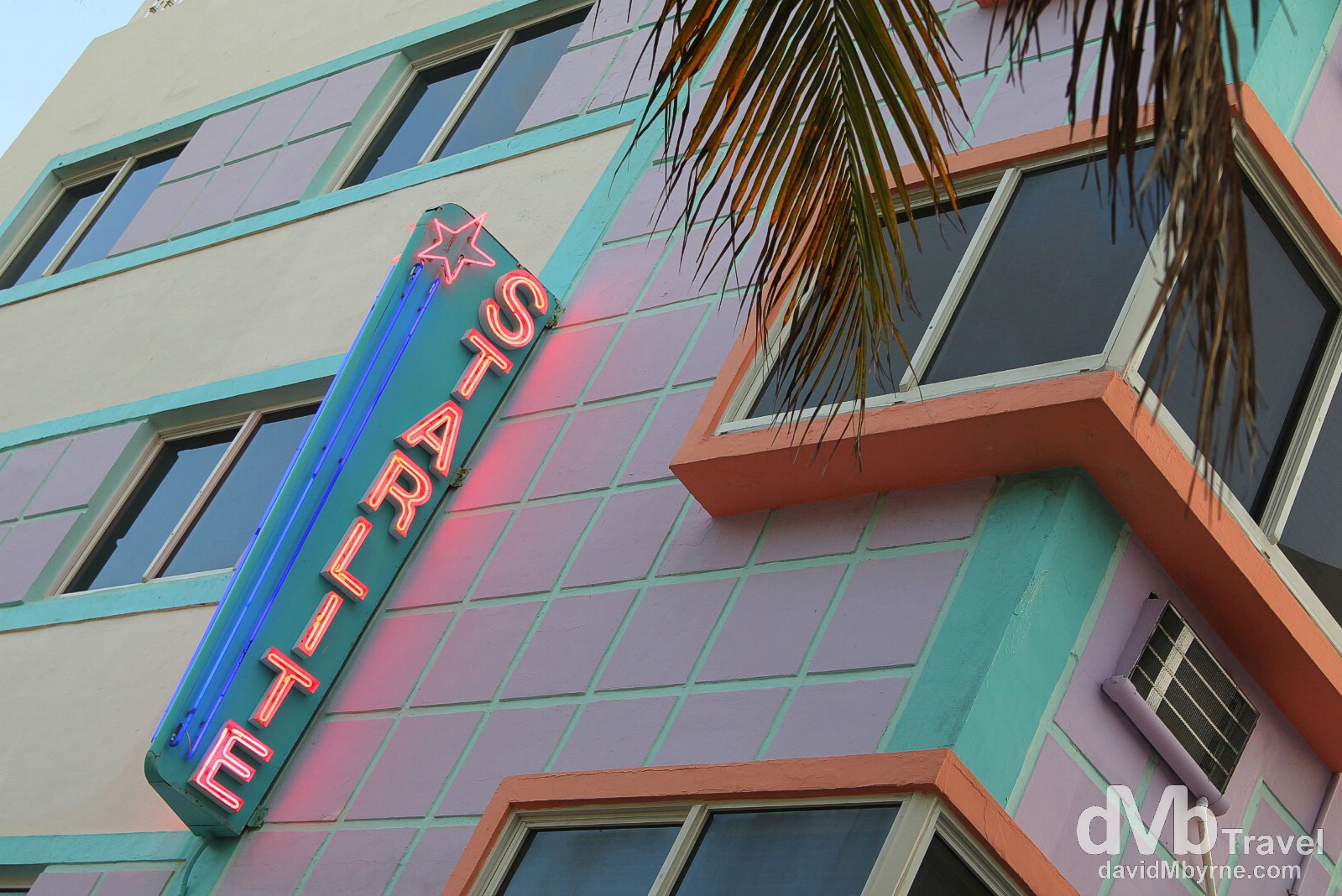 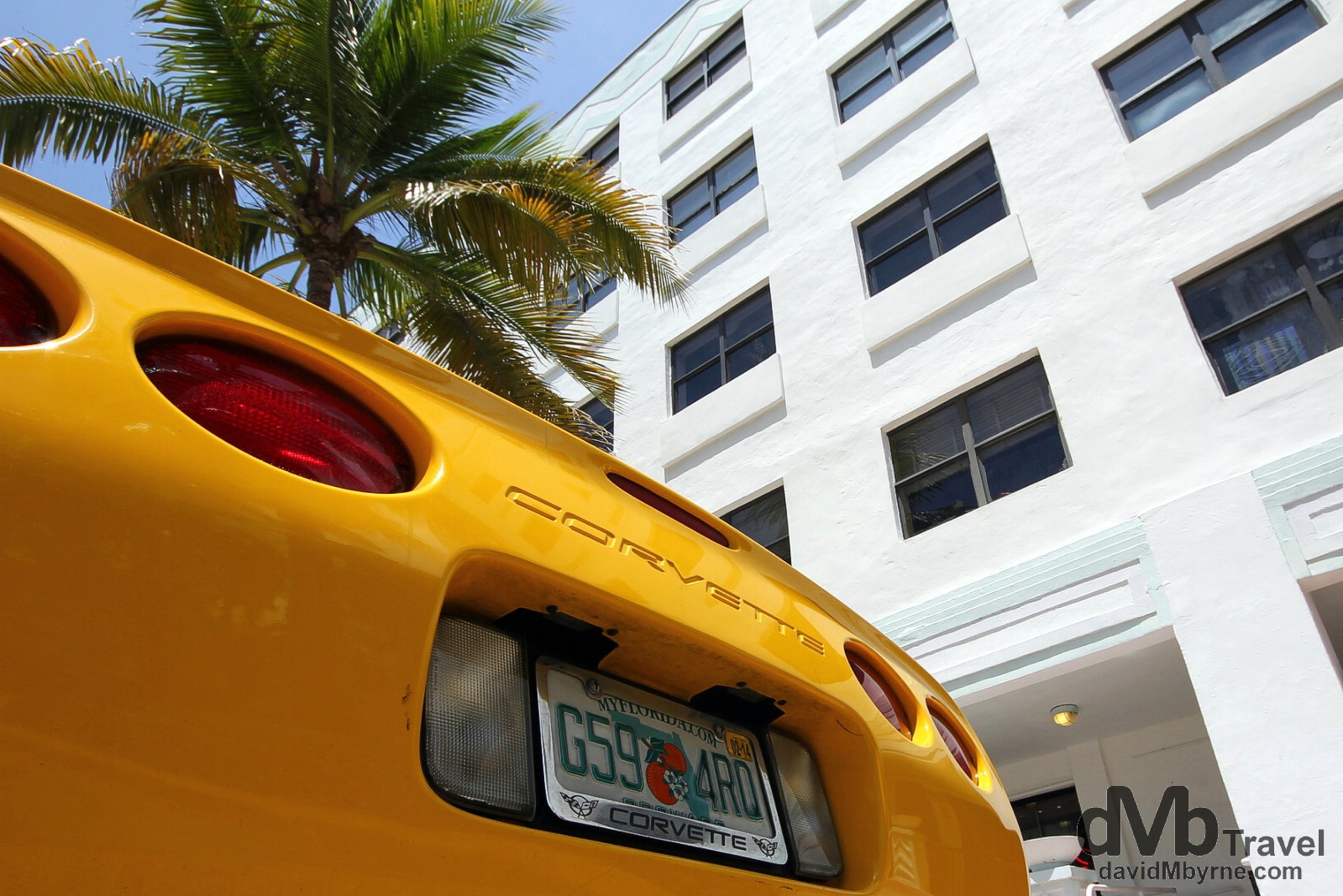 Ocean Drive At Night
Damn. I’ve just returned from a bit of night time photography on Ocean Drive. I captured the following pictures just before the heavens opened and drenched me and all the beautifully-dressed-&-ready-for-a-Miami-Beach-Monday-night-on-the-town types walking Ocean Drive. Yes, shock horror, it rains here in Miami Beach. Or at least it did tonight. 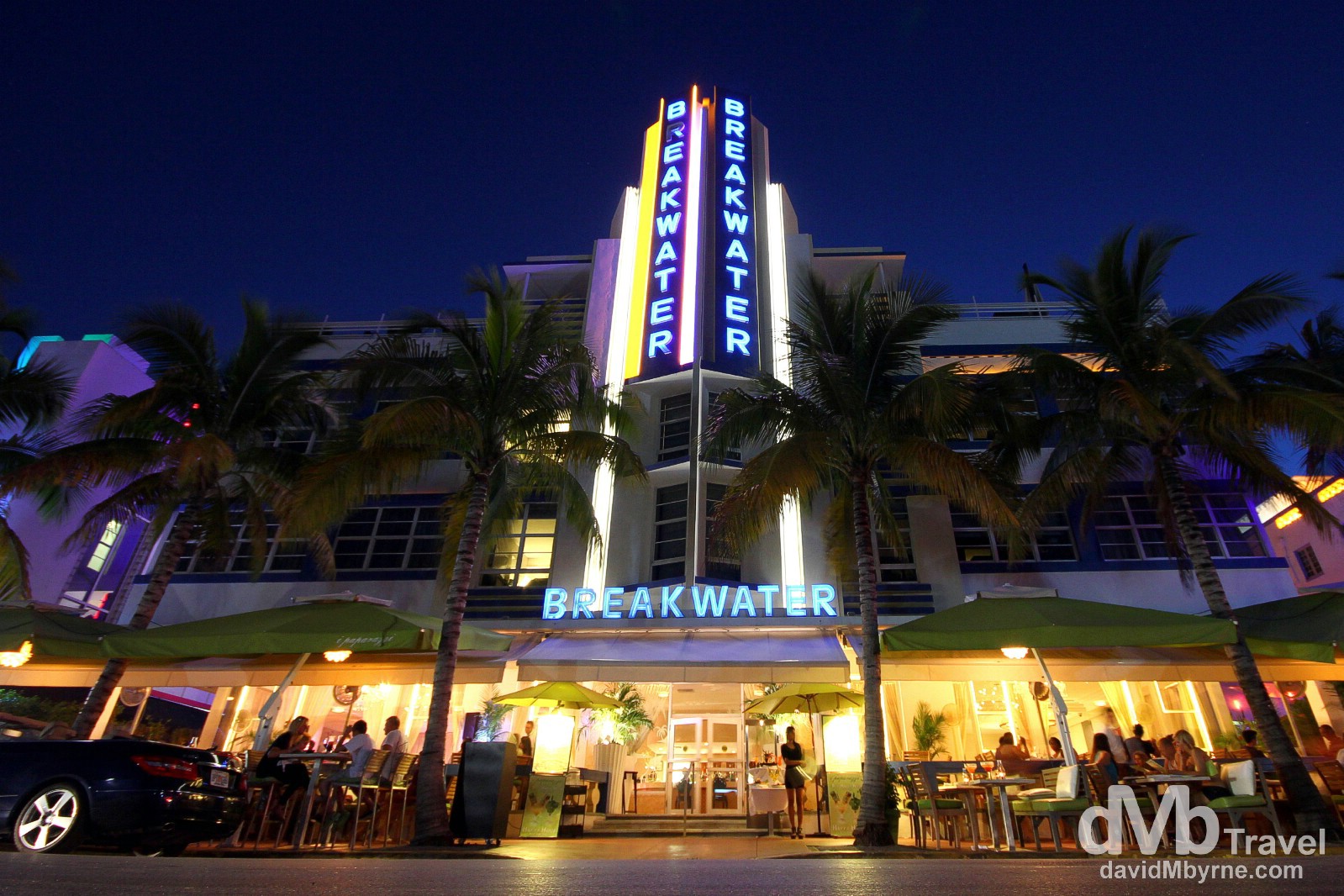 Hotel Breakwater, one of the most picturesque towers of neon on Ocean Drive, South Beach, Miami, Florida, USA. July 8, 2013. 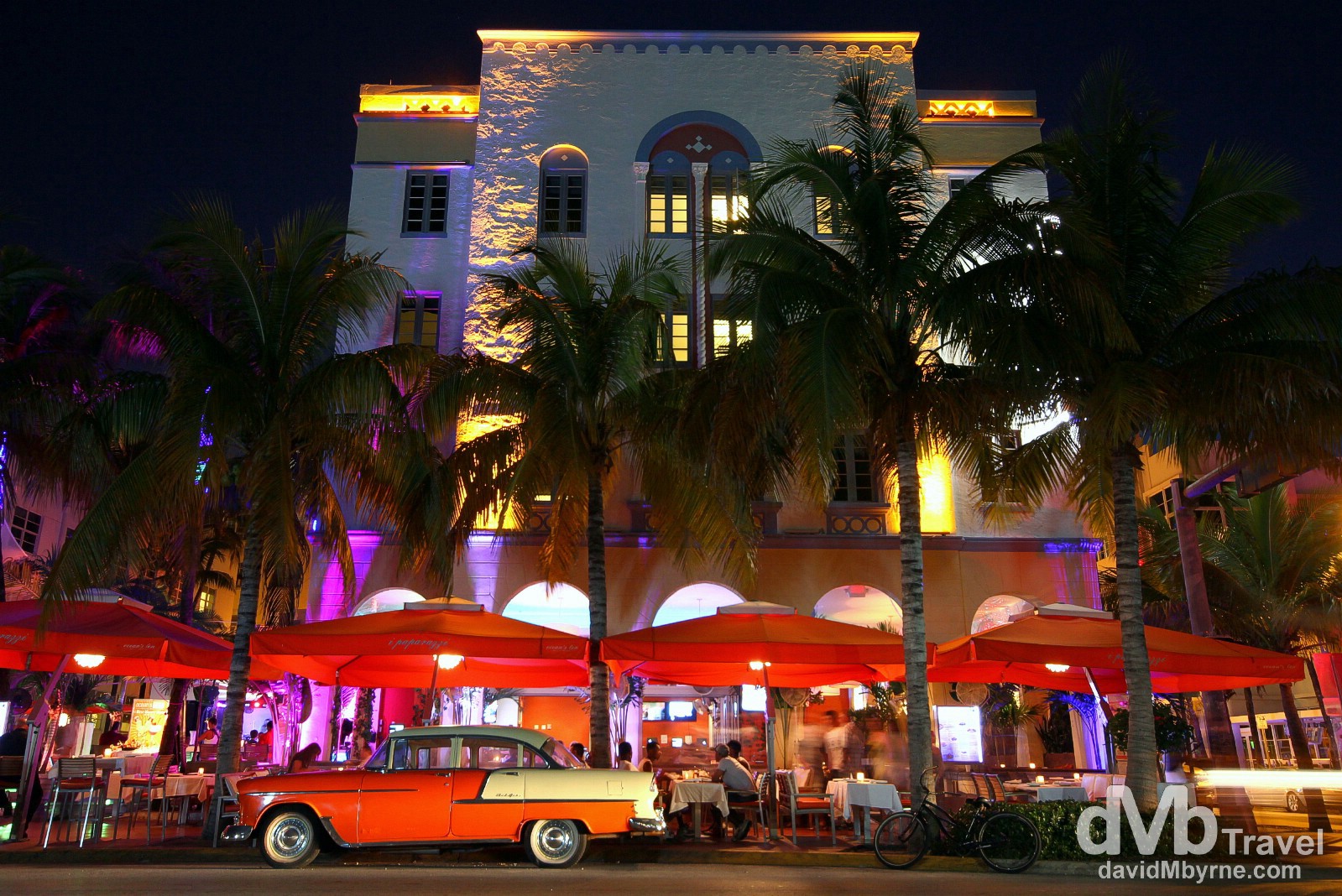