Arty, Alternative, Fashionable, Likeable & An Uber-Cool Place To Be

The Seattle skyline as seen from Elliott Bay. March 25, 2013

Seattle as a destination snuck up on me. I didn’t really know what to expect from the city. Prior to arrival I knew the city as the home of Boeing, Microsoft & Starbucks, but beyond that I didn’t know much of what there was to do or see (apart from the Space Needle, of course). That was because I didn’t read up on the city prior to arrival, something I’m getting accustomed to not doing as I move (& if that means getting more pleasant surprises like Seattle then I might just forgo any further pre-arrival destination research altogether). Having spent the last two days taking a look around the Pacific Northwest’s largest city, I now know that Seattle packs quite a punch. And even if it didn’t, the arty, alternative city is still be an uber-cool place to be.

Seattle is geographically beside Vancouver (so says any map) but city to city it’s still 190 kilometre, a 3-hour cross-border bus ride. I didn’t realise it’d take as long, not helped by the prying US Border Official who eventually decided to stamp me back into his country – upon questioning his questioning he revealed to me that he did so only after deeming me not to be ‘destitute’.

Just like Vancouver before it, I really have no idea what to expect from Seattle, the Pacific Northwest’s largest city. But initial impressions were good. Very good. When checking into my hostel on my first evening in the city I happened to inquire as to what Seattle had to offer. It was a general question that received a general answer from the chirpy hostel staff member. “Lots”, she claimed, while at the same time handing & gesturing to me to investigate one of those bright, funky, foldable touristy maps. A few minutes later I found myself sitting in a booth in The Belltown Pub, one the many bars in the funky Belltown district of the city, doing what I love best – having an IPA while analysing the aforementioned map & devising a plan of attack for the time I had at my disposal in Seattle. Oh yes, it was going to be fun. I could sense it.

The 184 metre-high Space Needle was built for the 1962 World’s Fair, held that year in Seattle. It achieved historic landmark status in 1999 & today is not only a city icon but also probably the Pacific Northwest’s most iconic structure (& along with Safeco Field, the home of the Seattle Mariners baseball team, the only landmark/building I knew in Seattle prior to arrival). 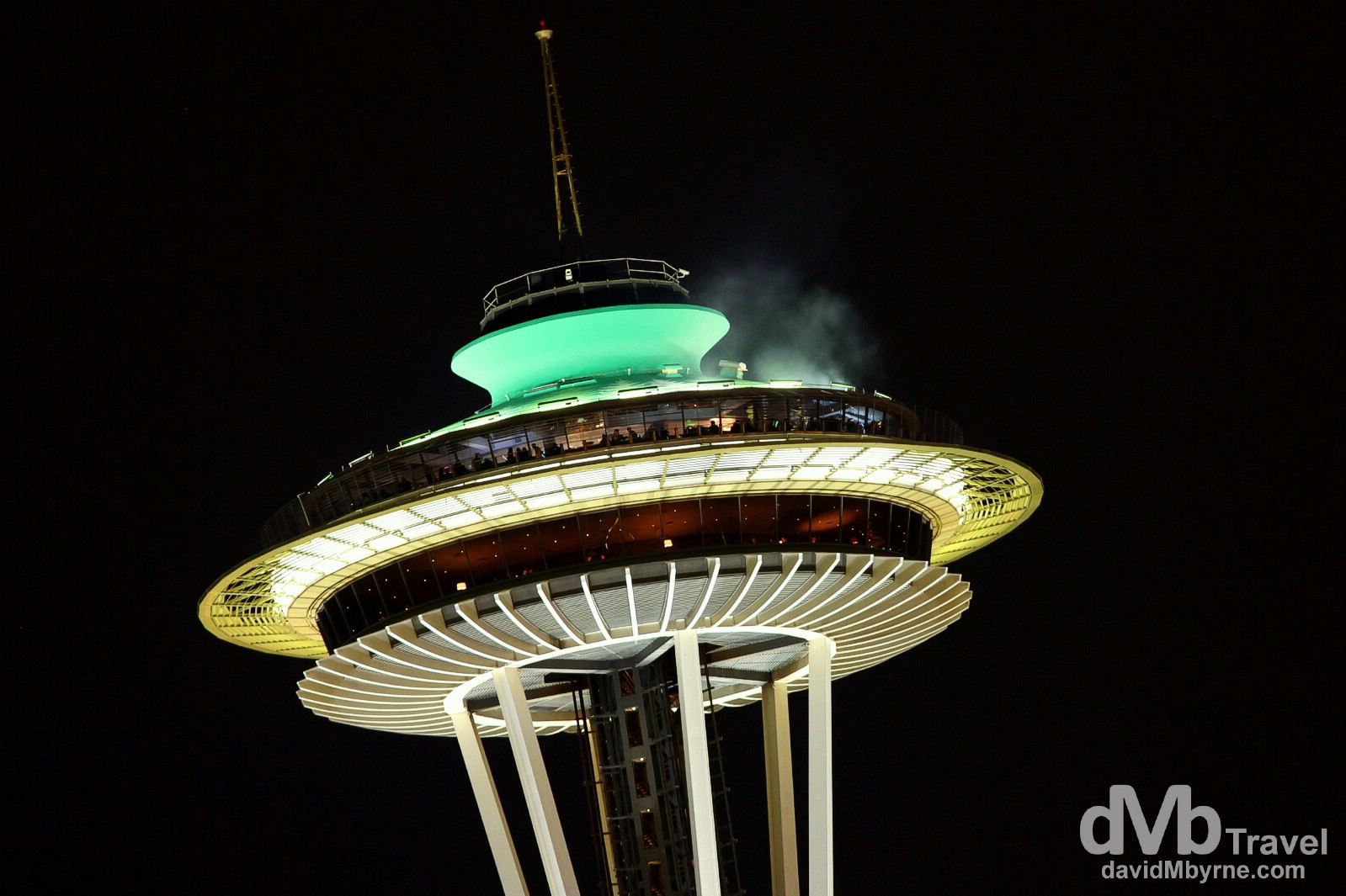 The iconic Space Needle at night. My first capture from Seattle, I took this picture from the window of my City Hostel room shortly after arrival in the city. Shortly thereafter I hit the streets to get some more shots from ground level, none of which bettered this handheld shot captured from afar. Seattle ( 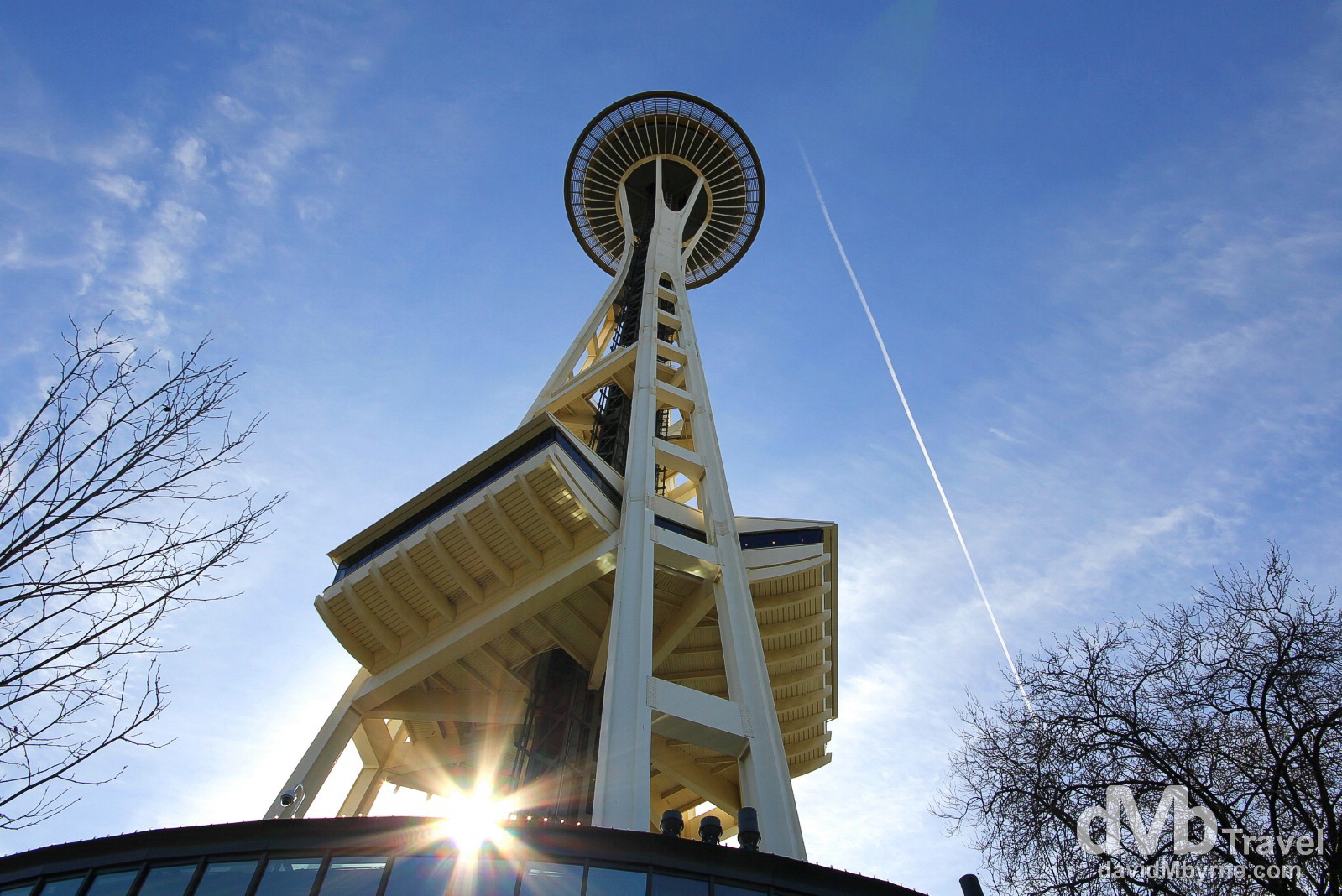 Sunburst from under the iconic Space Needle. This picture was captured at the start of an intense day of Seattle sightseeing, and a beautiful one at that in a city that gets more than its fair share of rain – the Pacific Northwest is a notoriously damp part of the world. Needless to say, the Space Needle boasts the usual money siphoning attractions one would expect from a tower of its ilk, namely an observation deck, a revolving restaurant & gift shops. It also boasts long queues for the 41-second elevator ride to the top. I didn’t venture up, happy to view the structure from ground level (ascending is only worth doing should the weather be like it was today, which isn’t too often I’m told). Seattle, Washington, USA. March 25, 2013.

Seattle’s EMP (Experience Music Project) Museum boasts 3 levels of galleries, interactive installations & exhibits allowing patrons to ‘Experience some of the most significant moments in rock music, science fiction & popular culture’. I passed on both the Black Leather Jacket Exhibit & the exhibit on Seattle’s own Jimmy Hendrix, but did take in the Nirvana (also hailing from the area, of course) & The Lure of Horror Film Exhibit. My favourite, however, was the Icons of Science Fiction Exhibit displaying some of the genres most mind-bending & famous creations. Superman’s costume was there, as was the original alien from the Alien movies, & a few cool props from Star Wars & Star Trek. A lot of the exhibit artefacts on display were on loan from Paul Allen, co-founder of Microsoft, another famous Pacific Northwest brand – by all accounts Paulie is quite the Sci-Fi junky. 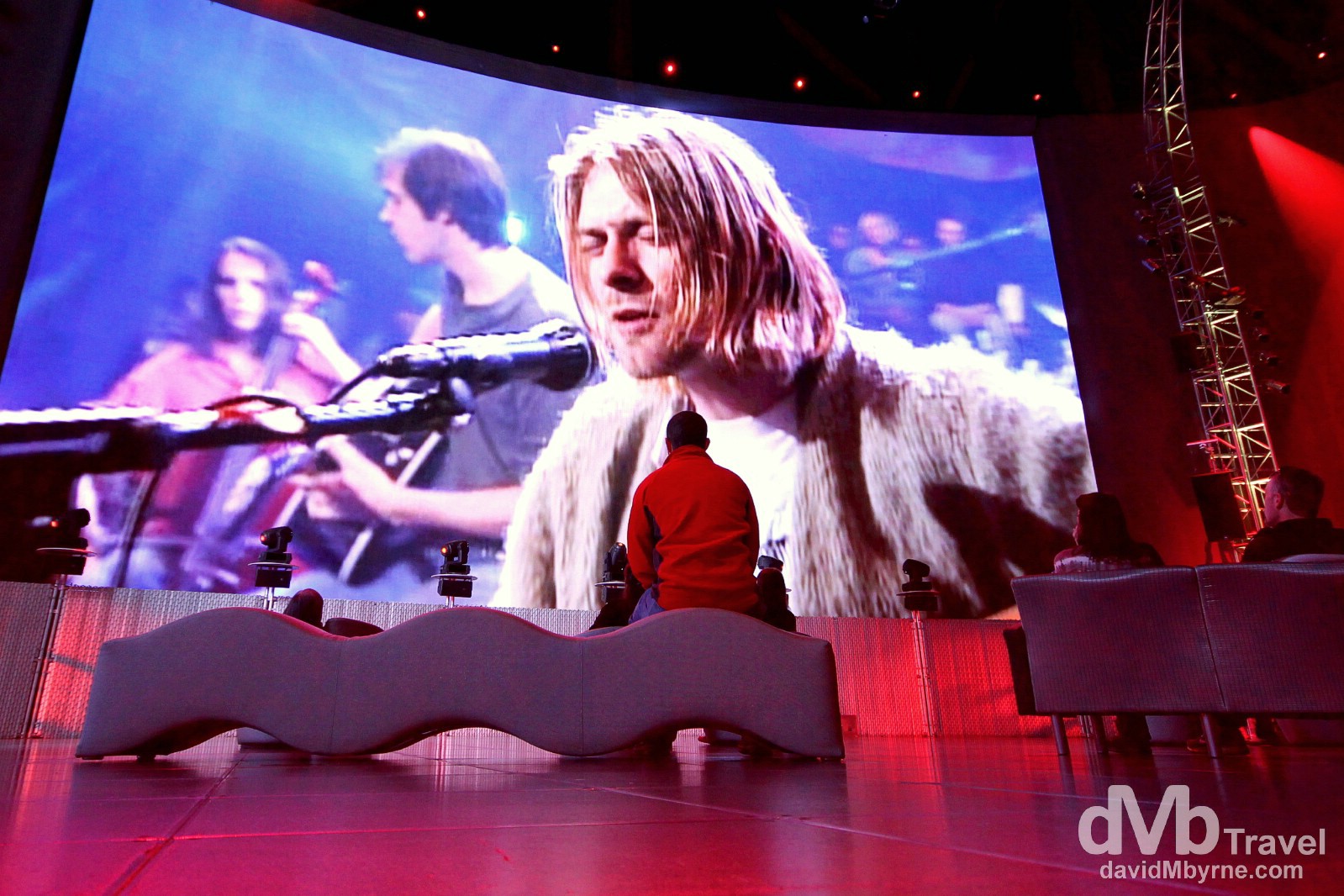 Seattle’s own Kirk Cobain on the large screen at the EMP Museum, Seattle, Washington, USA. March 25, 2013.

A world famous institution that I’d, whoops, never heard of, Pike Market Place offers a wonderful taste of Seattle of old & is probably the city’s biggest tourist draw. It’s an amazing place to bring a camera & I was quite overwhelmed by the onslaught of photographic subjects found here – stalls selling all manner of produce (grown, fished & man-made), bustling crowds & quaint shops. 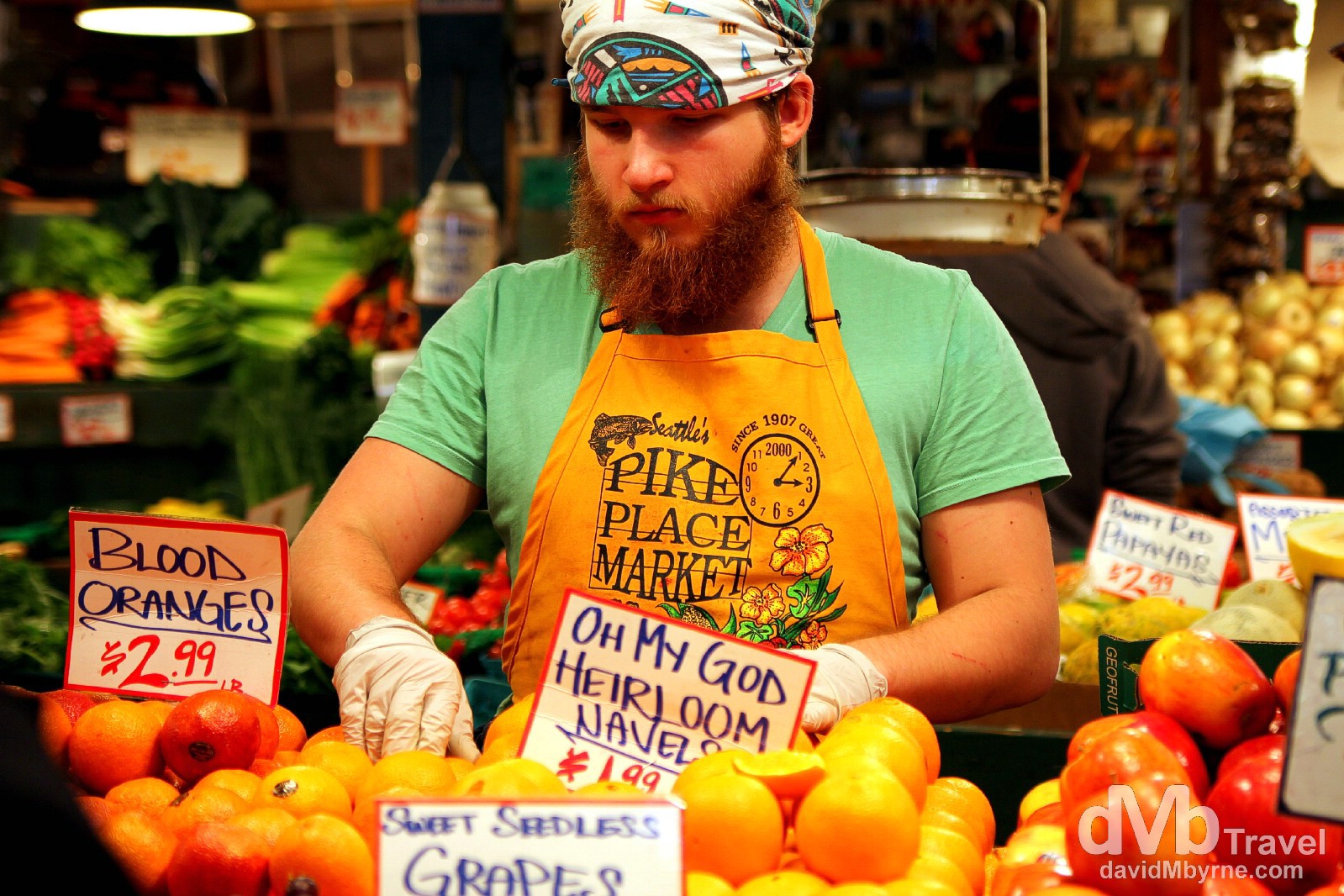 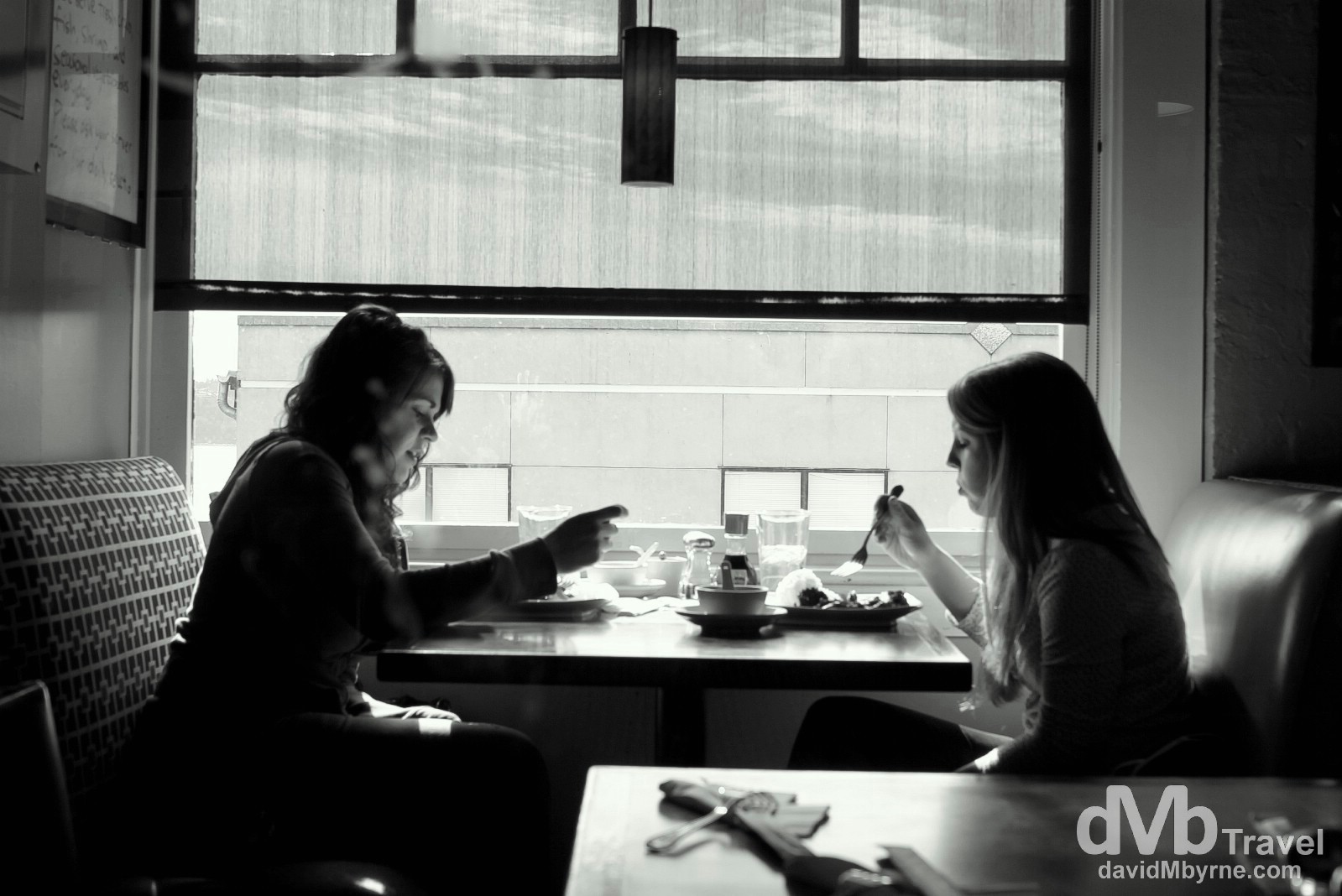 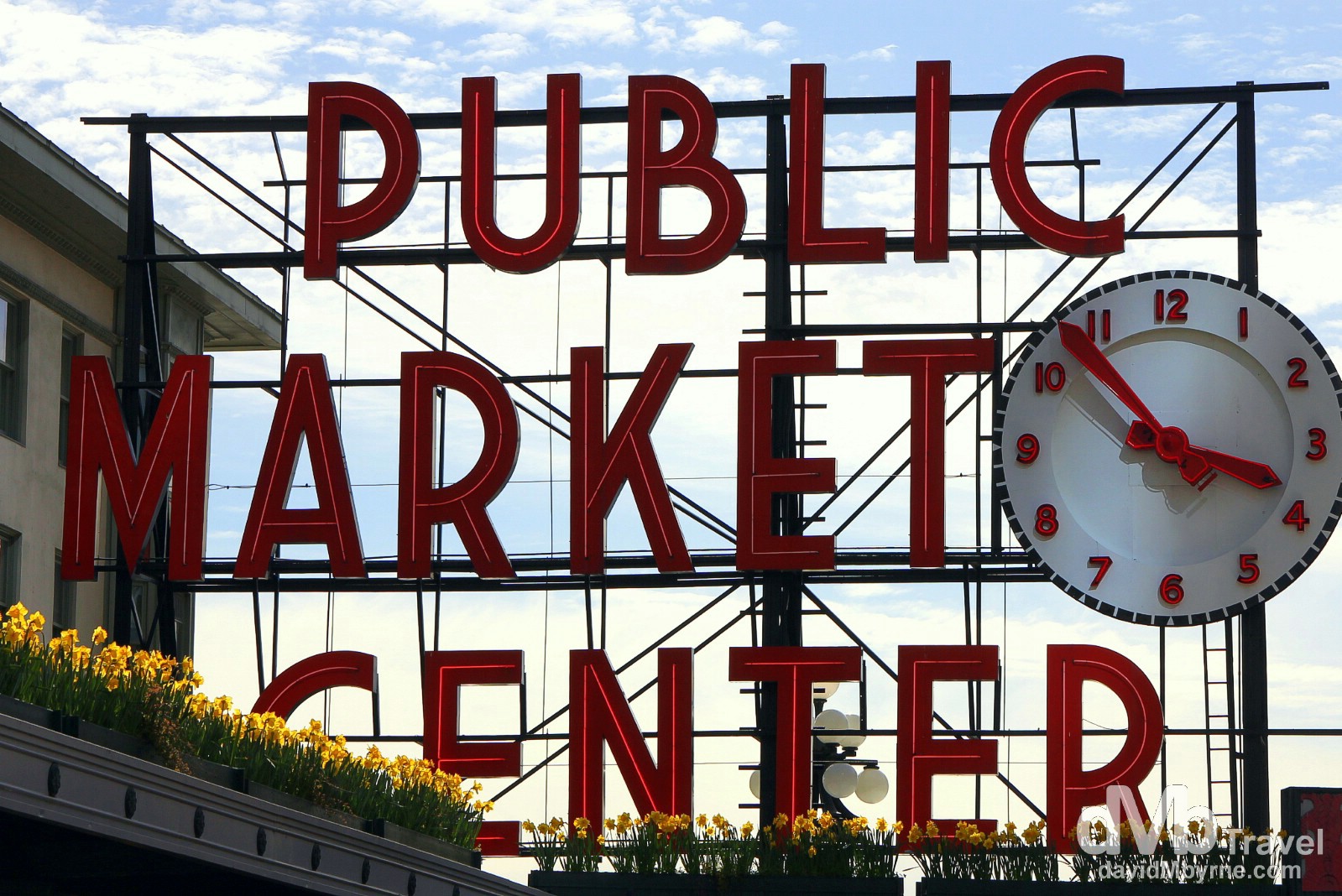 I hadn’t planned on taking a Seattle harbour cruise, but neither did the cruise company facilitation it (or so they claim). An extra 1-hour cruise was scheduled for this day in recognition of the beautifully sunny day, quite the anomaly for late March in Seattle, something I’ve been informed of a few times today – it seems Seattleites like to talk about the weather as much as us Irish do. Anyway, the extra cruise was offered at half price ($10) and at that price I just couldn’t, and didn’t, say no – and I’m glad I didn’t as I captured probably my favourite shot from my time in Seattle from the waters of the city’s Elliott Bay. 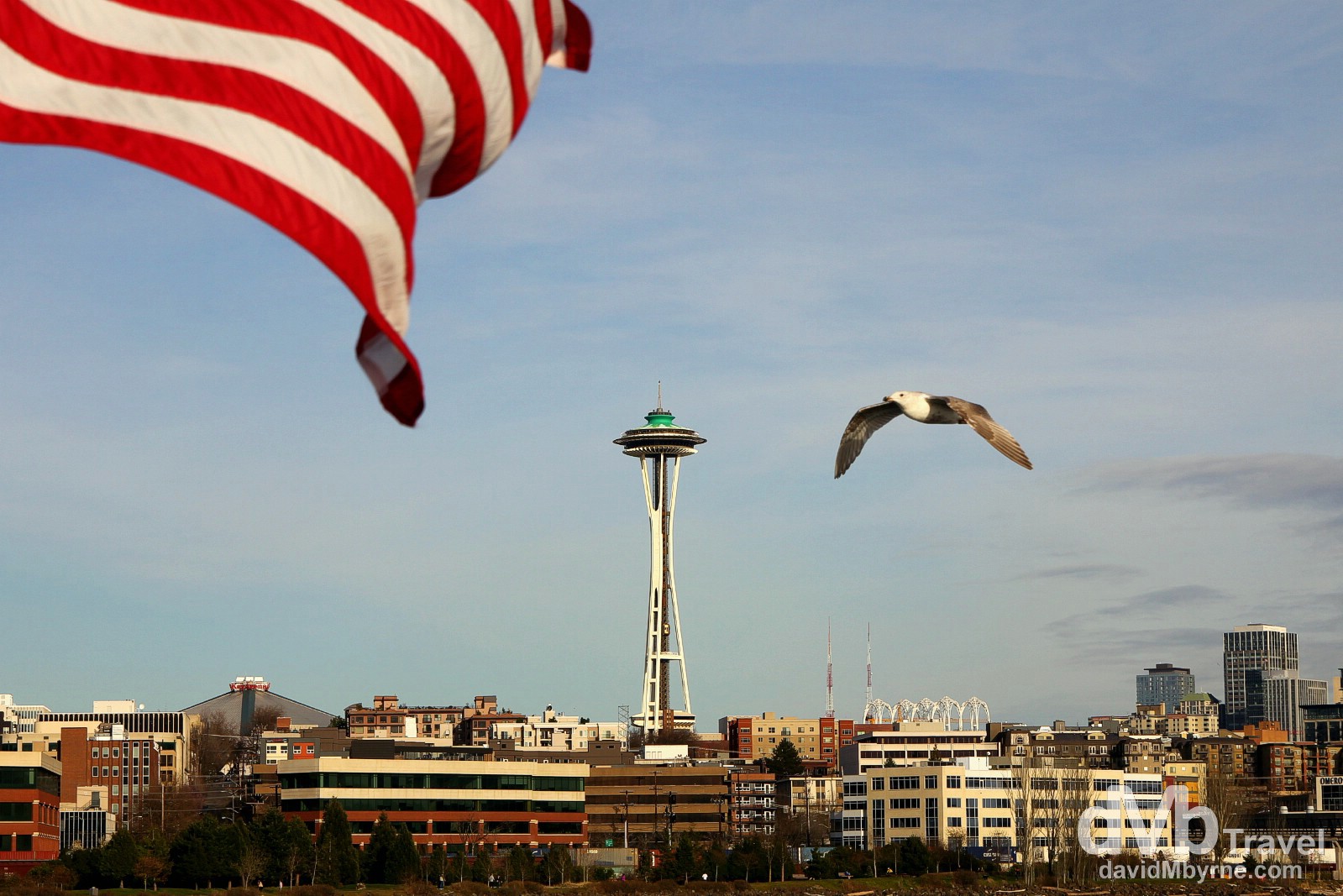 Ye Olde Curiosity Shop has been here in one form or another since 1899. In continuous operation by the same family since its opening, the narrow, cluttered gift novelty store, a mainstay of Seattle tourism, never fails to please and revolt in equal measure. 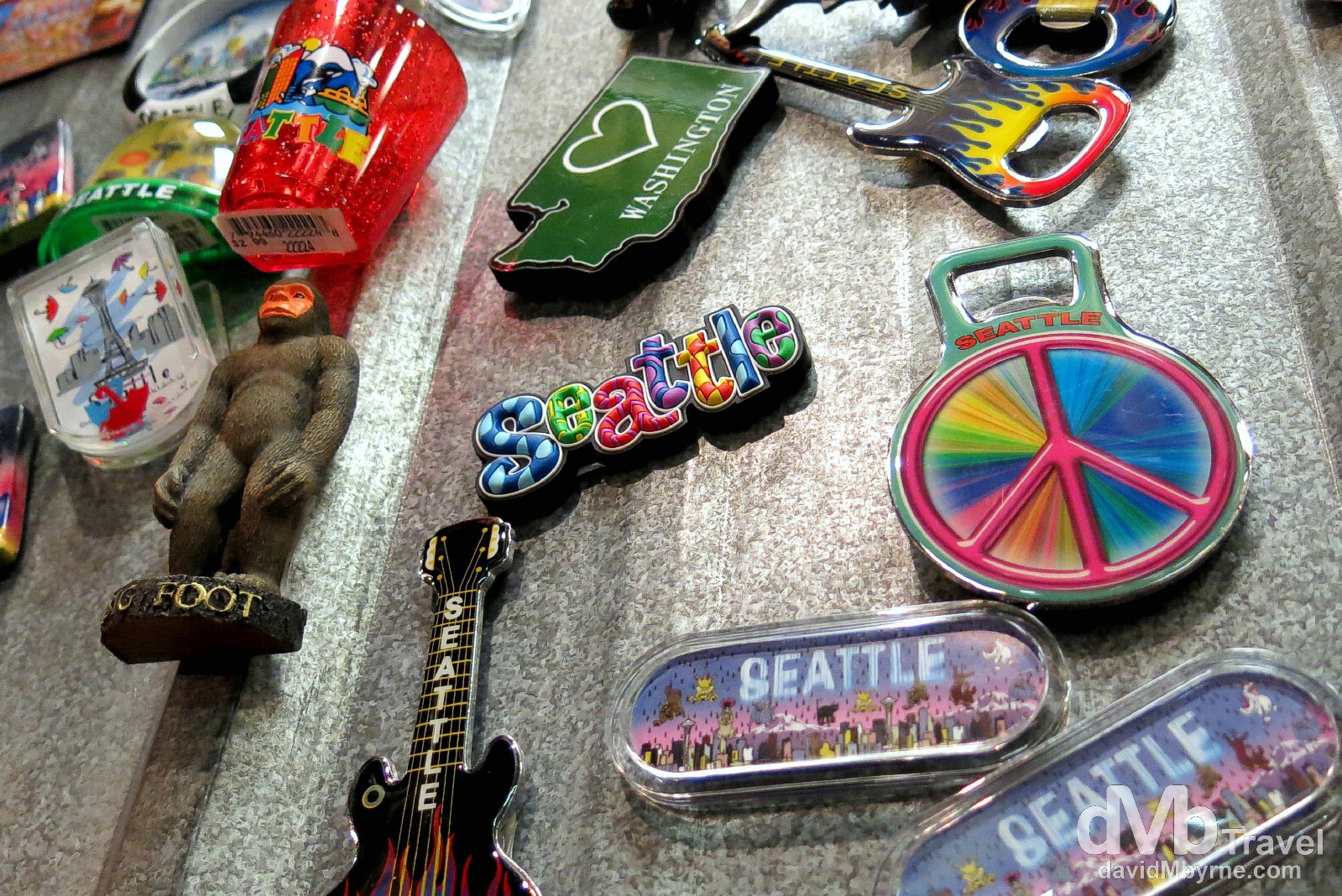 Fridge magnets in Ye Olde Curiosity Shop. Although a shop first & foremost, the resident mummies (American, not Egyptian), Sylvester and Sylvia, are the biggest attractions found here. Other shop denizens include a virtual family of Barnum Mer-creatures, a Mermaid, a Mer-Baby, and a Mer-dog named Petri-Fido. The requisite freak pig in a jar shares space with a ship scale model constructed entirely of matchsticks. Oh, and not forgetting the 350-year-old African voodoo monkey, its intestines having been removed and braided onto its head. Curious indeed & a Seattle must-see. Ye Olde Curiosity Shop, Seattle, Washington, USA. March 26 2103.

I opted not to visit Seattle’s Aquarium, where seemingly you’ll find a mammoth octopus and a coastal tide pool, deciding instead to pay a visit to the awesome Museum of Flight on the outskirts of the city. This is Boeing territory after all – its main production facility is about 20 miles north of Seattle. The museum is rather large & houses the wooden Red Barn, the Boeing company’s original manufacturing plant now beautifully restored & housing various exhibits on the early years of the Boeing company. Other highlights included seeing the M-21, the world’s only remaining Blackbird spy plane; lots of stuff on space exploration, including the now-retired full-scale mock-up of the shuttle payload bay used to train NASA astronauts (the shuttle program is no more so the bay has found a permanent home in the museum); & beautifully presented exhibits on the airborne aspects of both World Wars. But as good as all of that was – & it was – it was the museum’s outdoor Flight Yard, these days a permanent home to some now grounded icons of the skies, that proved to be the overall highlight of the museum for me.

An iPod panorama of the Flight Yard of Seattle’s Museum of Flight, now the resting place of many once pround icons of the skies who have had their wings firmly clipped. In the centre of the picture is a prototype 747, the first Jumbo Jet ever built (serial number 001) which first flew in February 1969. Beside it, to the right, is a Boeing 707, the first jet-powered Air Force One which carried the likes of Presidents Eisenhower & Kennedy. However, it was the West Coast’s only Concorde, far right, & one of only 20 ever built (14 for commercial service), which stole the show for me. This particular British Airways Concorde, registration G-BOAG, first flew in April 1978 & made the last ever commercial Concorde flight in October 2003, setting a New York-to-Seattle speed record of 3 hours 55 minutes and 12 seconds en route to the museum. Concorde always fascinated me growing up (I wish they still flew) so seeing inside it was a thrill. I was taken aback as to how cramped the interior was – not much room was afforded to those experiencing its luxury. The Museum of Flight, Seattle, Washington, USA. March 26, 2013. 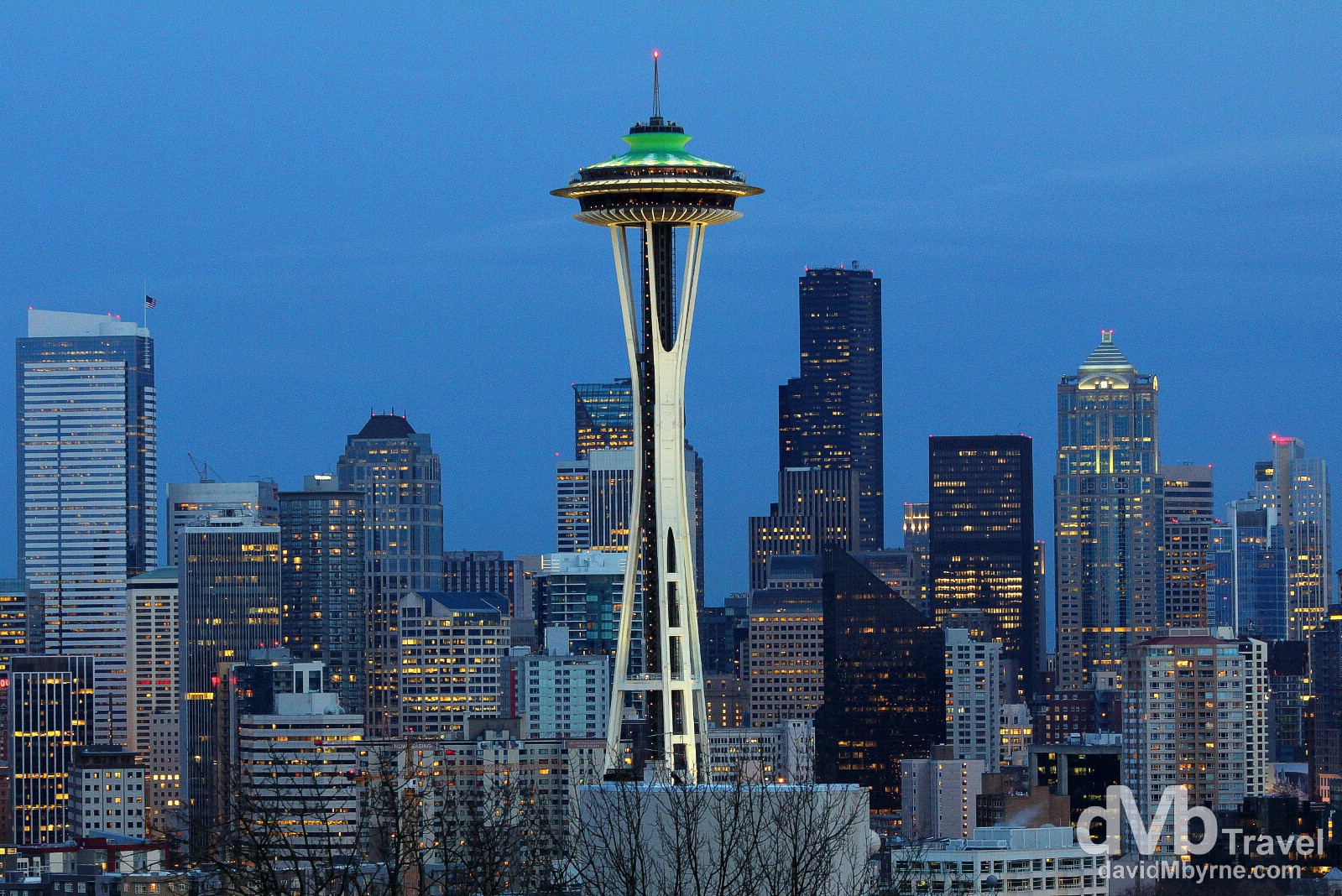 Seattle || What’s Not to Love?
Seattle was great. A lively, art-focused, modern, nature-tinged city with great coffee & an even better always-on vibe. Oh, and it’s just a little different, but in a good way. What’s not to love?