The Halibut Fishing Capital Of The World, The Terminus Of The Sterling Highway, & The Most Westerly Position In North American Accessible By Road

Geographically Seward & Homer on the Kenai Peninsula in Alaska, USA, are not that far apart – as the crow flies it’s about 130 kilometres (80 miles). However, a massive natural barrier of snow-capped peaks separates the peninsula’s two largest towns meaning the round-about, natural-barrier-skirting, up-over-&-down trip between the two locations in a car via the Seward & Sterling Highways measures a tad over 270 kilometres (170 miles). Four & a bit leisurely hours it took me to drive that distance a few days ago. And when I did I couldn’t go any further. I’d reached the end of the road. That said, there was no let up in the jaw-dropping Alaskan scenery (not that I really expected there to be). 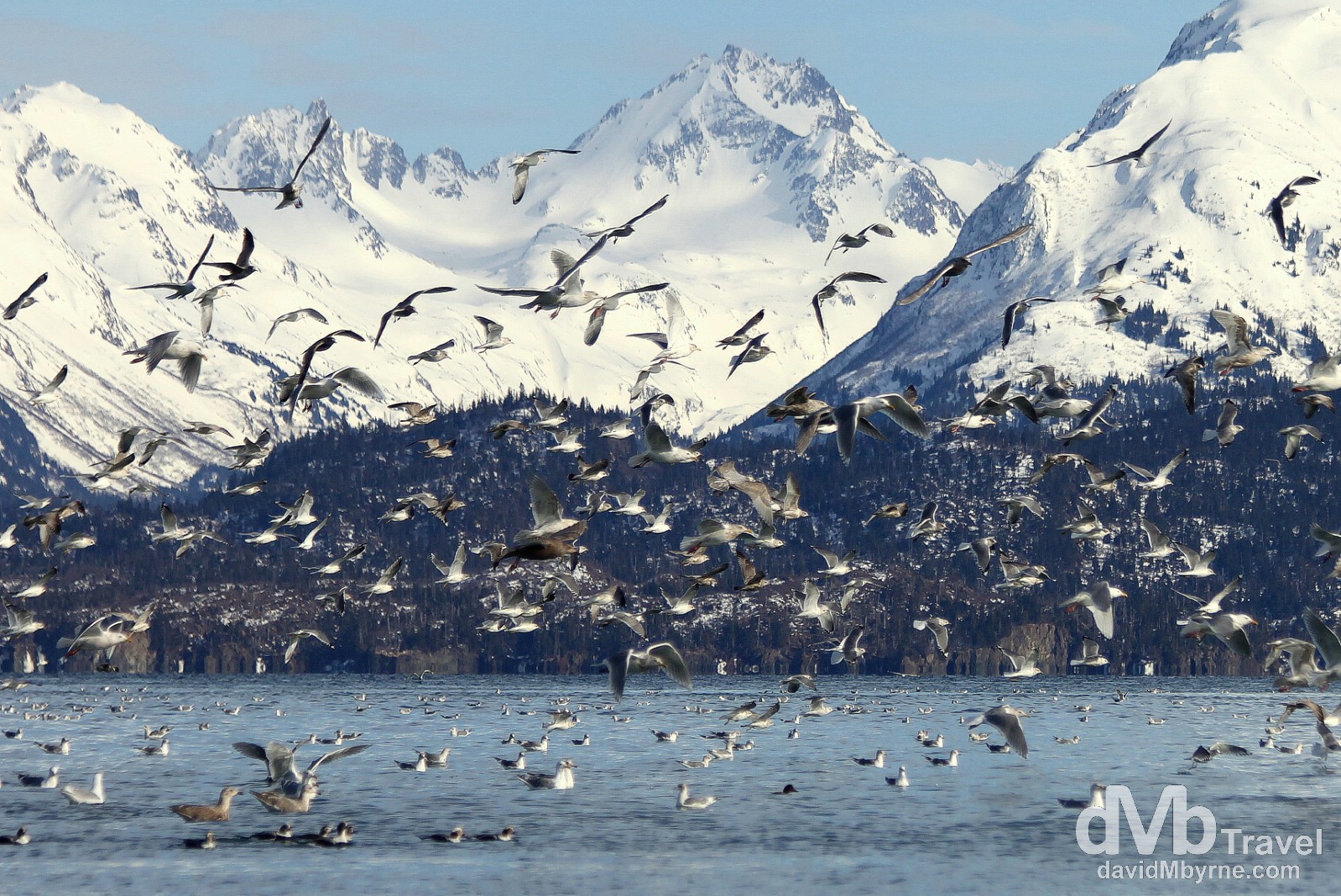 Activity at the end of the Spit in Homer. Billed as ‘The Halibut Fishing Capital of the World’, Homer boasts a very unique geographical feature, its Spit, a narrow 8 kilometre (5 mile) long gravel bar that extends into Kachemak Bay which, just like Turnagain Arm up north, is another arm off the larger Cook Inlet. The end of The Spit marks the end of the Sterling Highway – which gives Homer it’s other nickname ‘The End of the Road’ – but it also claims to be the furthest westerly position on the North American Continent that’s accessible by road. Whether that’s true or not I cannot verify but what is true is that the Spit road is the longest road jutting into ocean water anywhere in the world. It’s a popular hangout for birds, especially gulls, and other wildlife. This coupled with the backdrop of the peaks of Kachemak Bay State Park and Kachemak Bay Wilderness Park across Kachemak Bay makes for quite the setting. At the end of the Homer Spit, Homer ( 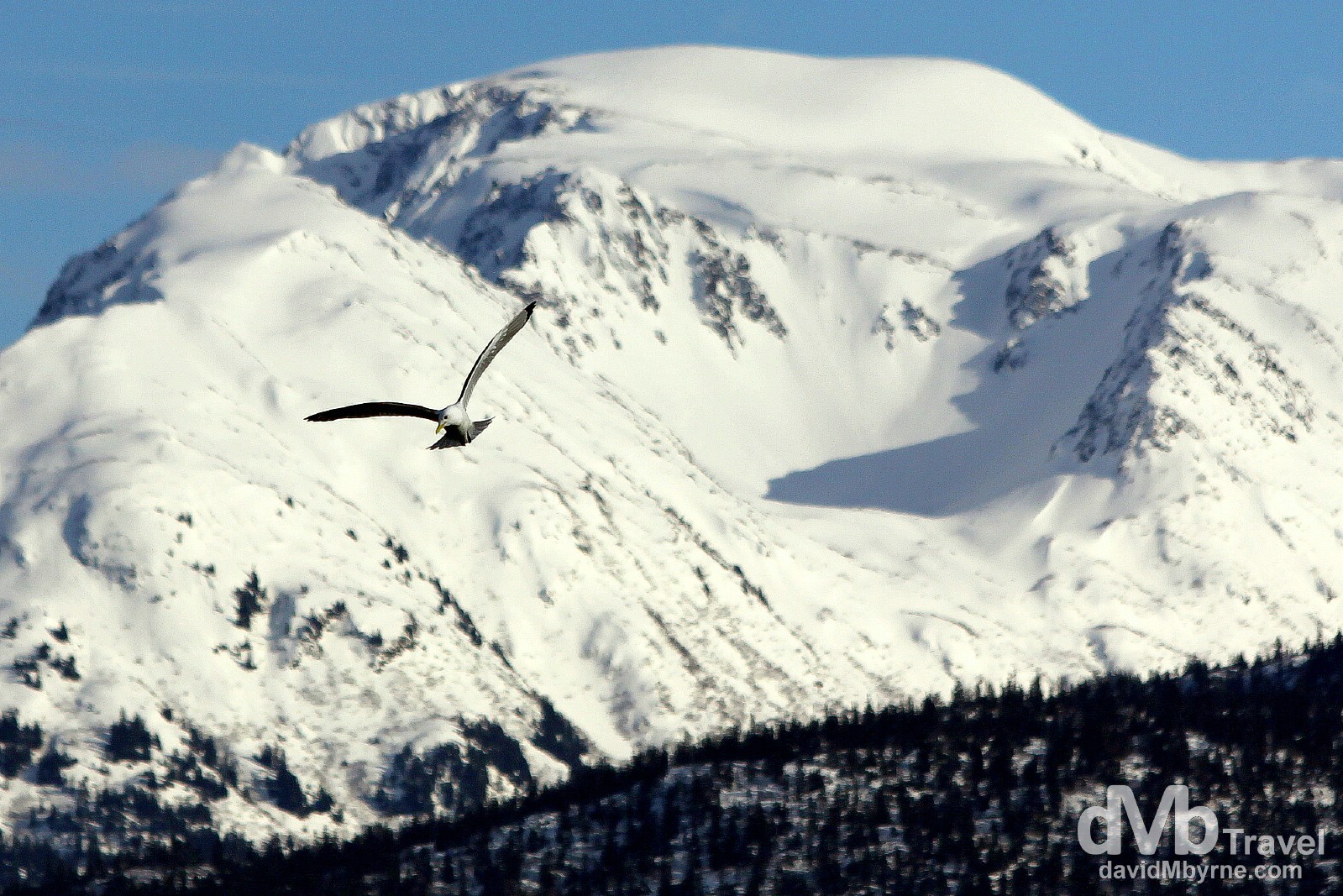 It wasn’t only gulls hanging out on the Spit. It’s also a popular nesting & feeding spot for eagles. 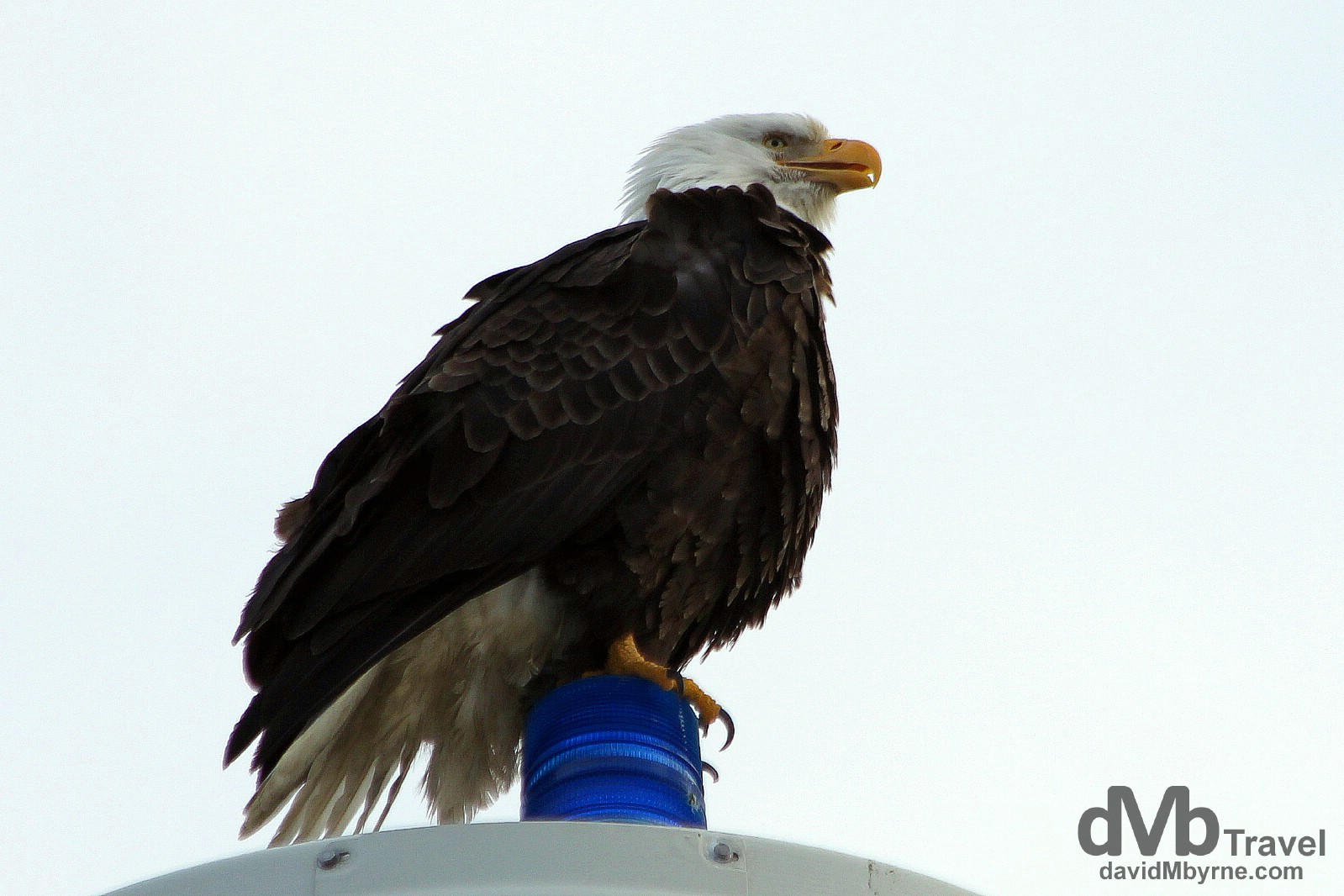 An eagle perched high on a pole on the Spit in Homer. I sat in the car under this eagle for about 10 minutes snapping him. I had the camera on him the whole time waiting for the moment he’d take flight. He never did. Patient bugger (more so than me at least). On the Spit in Homer, Kenai Peninsula, Alaska. March 16, 2013.

Skyline Drive in the hills overlooking Homer offers the best views of the Spit protruding into Kachemak Bay. 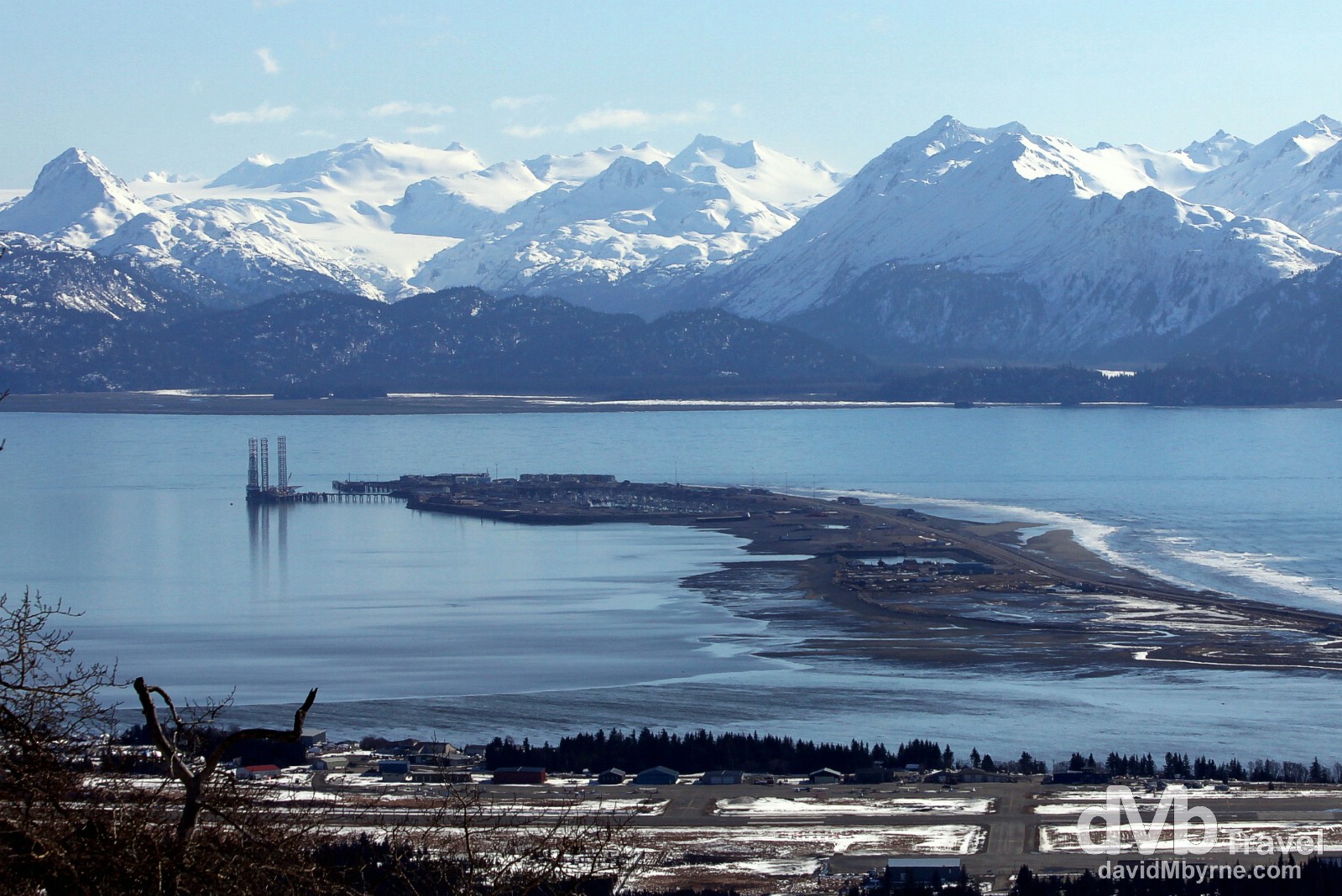 An overview of the 8 kilometre-long Homer Spit, the longest road into ocean water anywhere in the world, as seen from Skyline Drive. There are two different theories as to how the Spit formed. One claims that it’s the result of tidal swell sand build-up, while another claims that it was pushed into place by retreating glaciers. What is in no doubt is that it was the laying, in 1899, of a railroad on the Spit (to connect the Spit docks to the coal fields along Kachemak Bay) that eventually led to the development of what is now Homer. The Spit sits only 6 metres above sea level, making it susceptible to storm surge. The massive 1964 Alaska Earthquake (the biggest earthquake ever in North America and the second largest recorded in history) sank large part of the Spit, reducing it in size and killing most of the vegetation – today the Spit is mostly gravel and sand, an area where very little vegetation is able to survive. Homer, Kenai Peninsula, Alaska, USA. March 17th 2013. 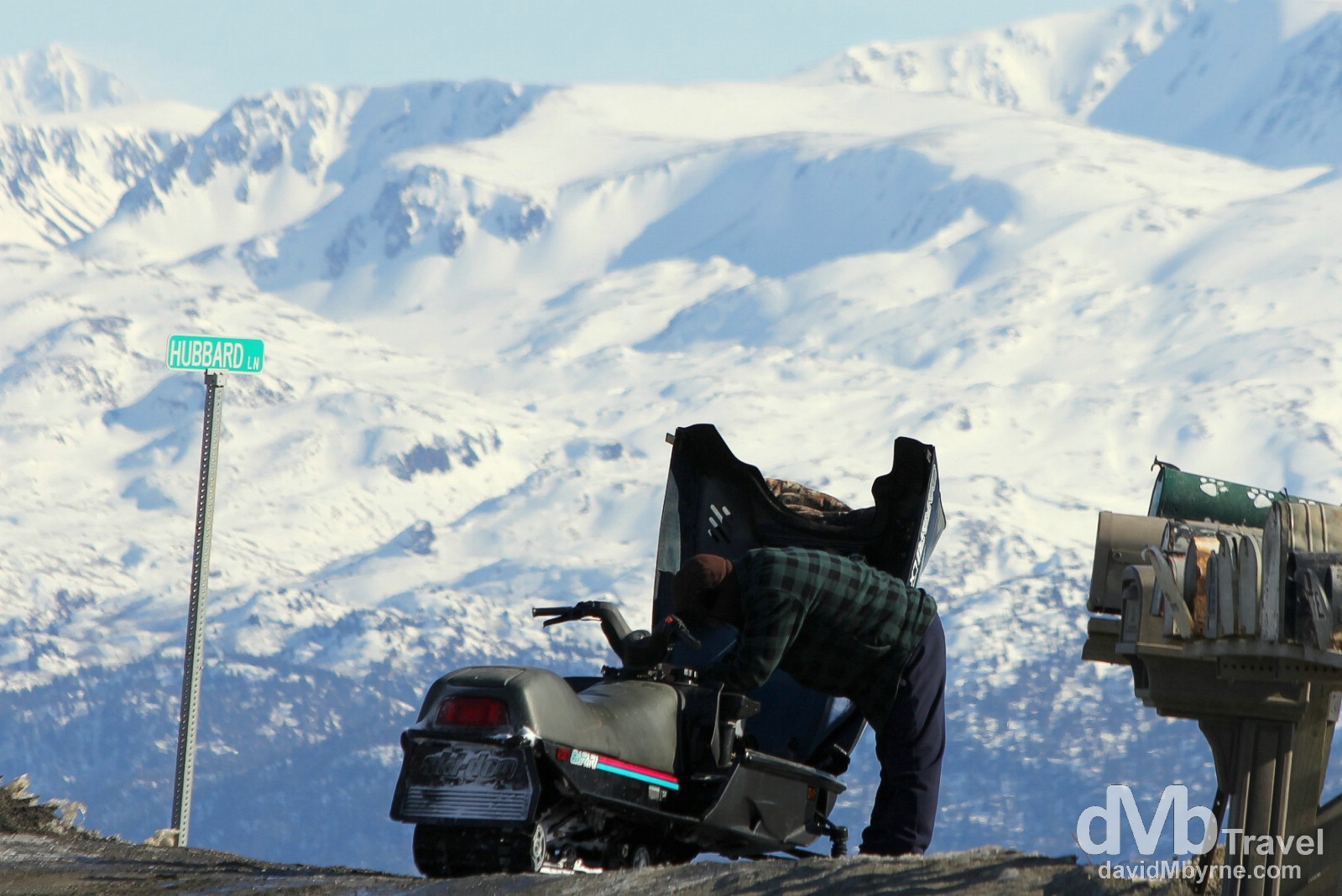 Homer St Paddy’s Day Bust
With no St. Patrick’s Day hangover to inhibit me, I was up early this morning for a final bit of Homer photography. Where? Where else but the Spit. For me it was the only show in town. 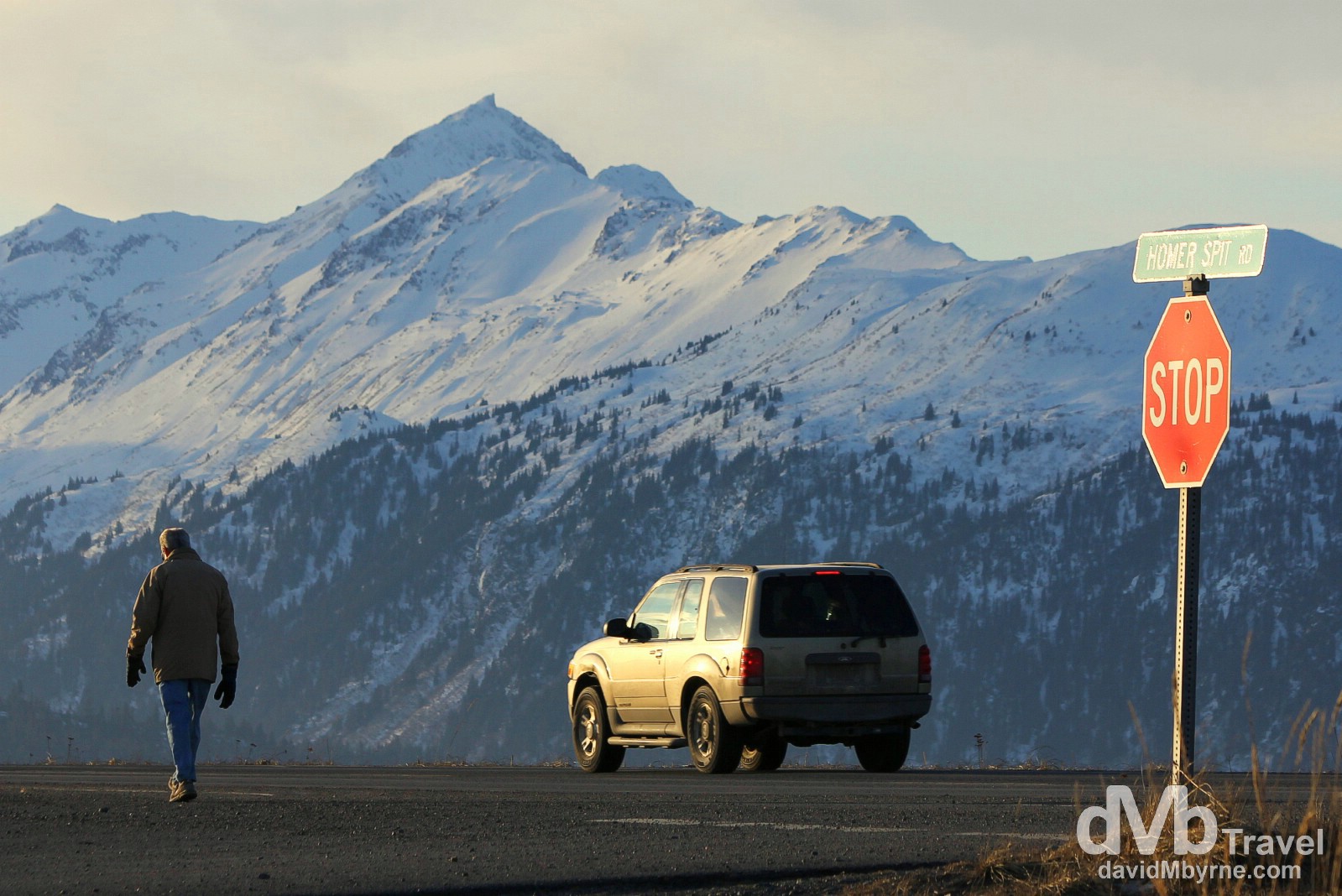 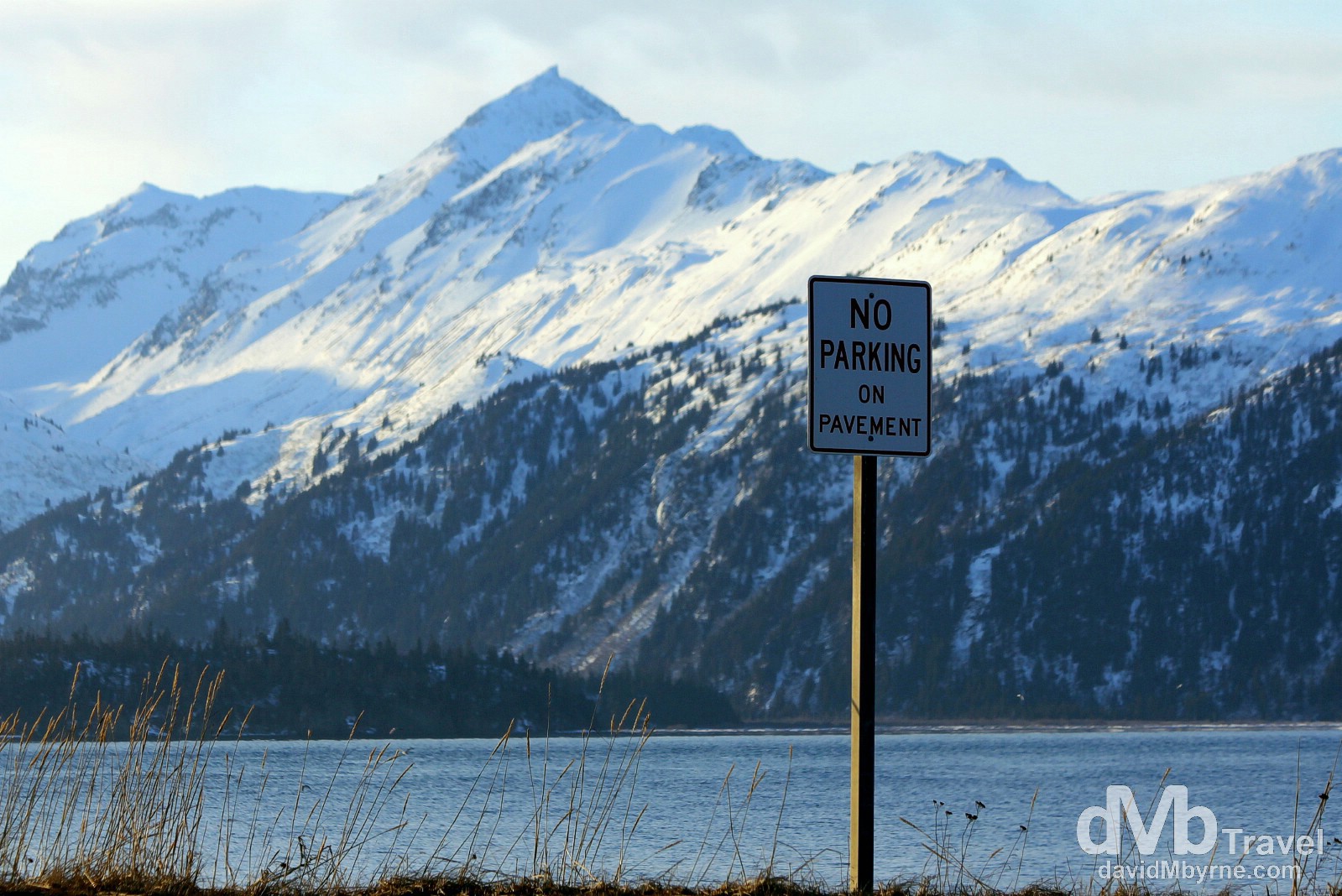 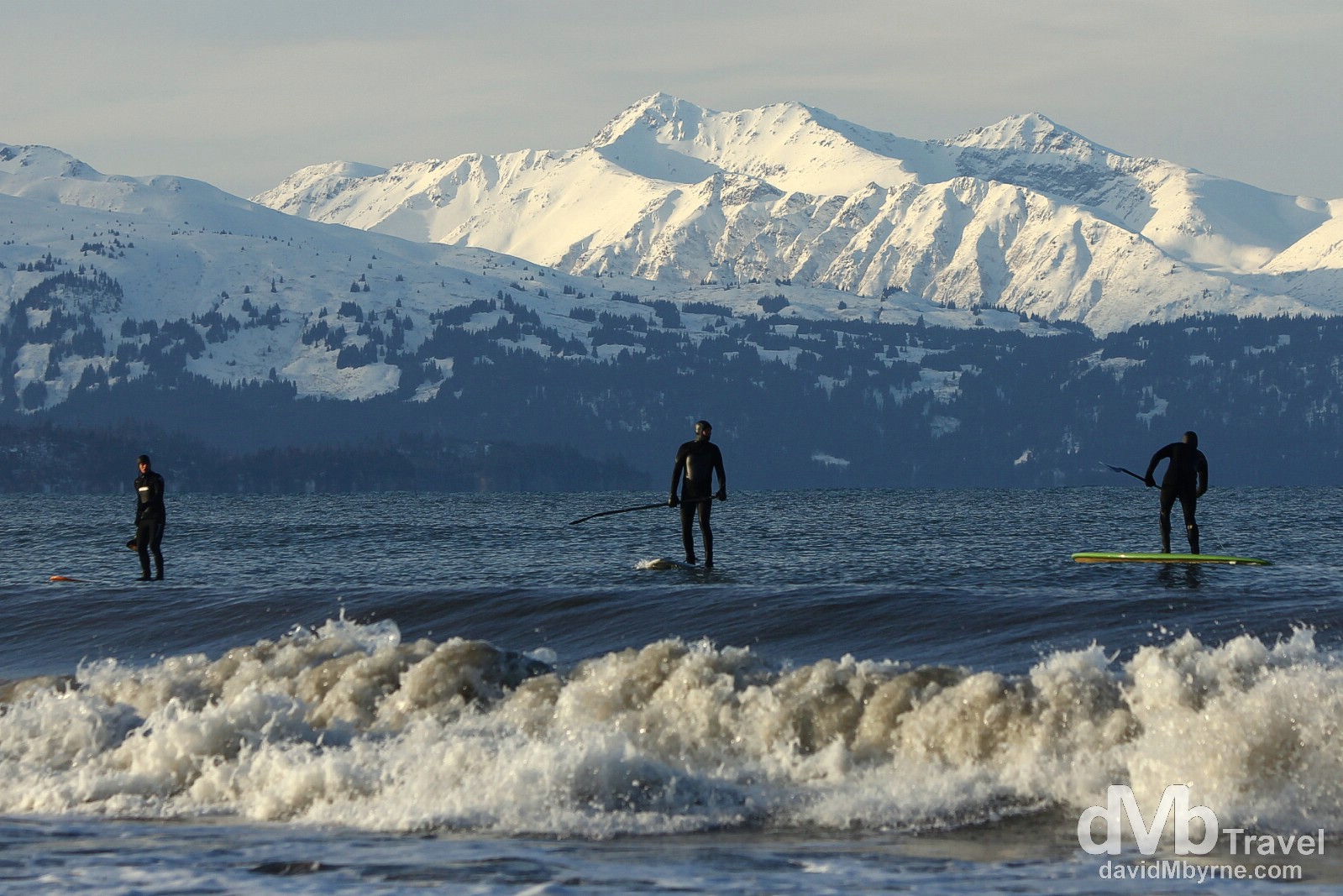 I can think of better ways to start a day. But each to their own. Paddle boarding off the Spit in Homer, Kenai Peninsula, Alaska, USA. March 18, 2103.

One Last Kenai Drive
My two nights in Homer have come to an end & I’m getting ready for the drive back along the Kenai Peninsulas Sterling & Seward Highways to Anchorage, where I’ll spend the night ahead a flight to Vancouver, BC, Canada, in the morning. Today I’ll be largely retracing my steps and thus I don’t imagine I’ll be seeing anything on the drive to Anchorage that I haven’t seen already. But boy am I ever looking forward to it anyway.