Turnagain Arm of the Cook Inlet as seen from the Seward Highway, Alaska. March 12, 2013

It was always going to be but arriving in Alaska was certainly memorable. Within 7 hours of getting on a flight in 30 °C Hawaii, I was dealing with snow, ice & -4 °C temperatures (& sunburn) here in a wintry & Closed-For-The-Winter Alaska. 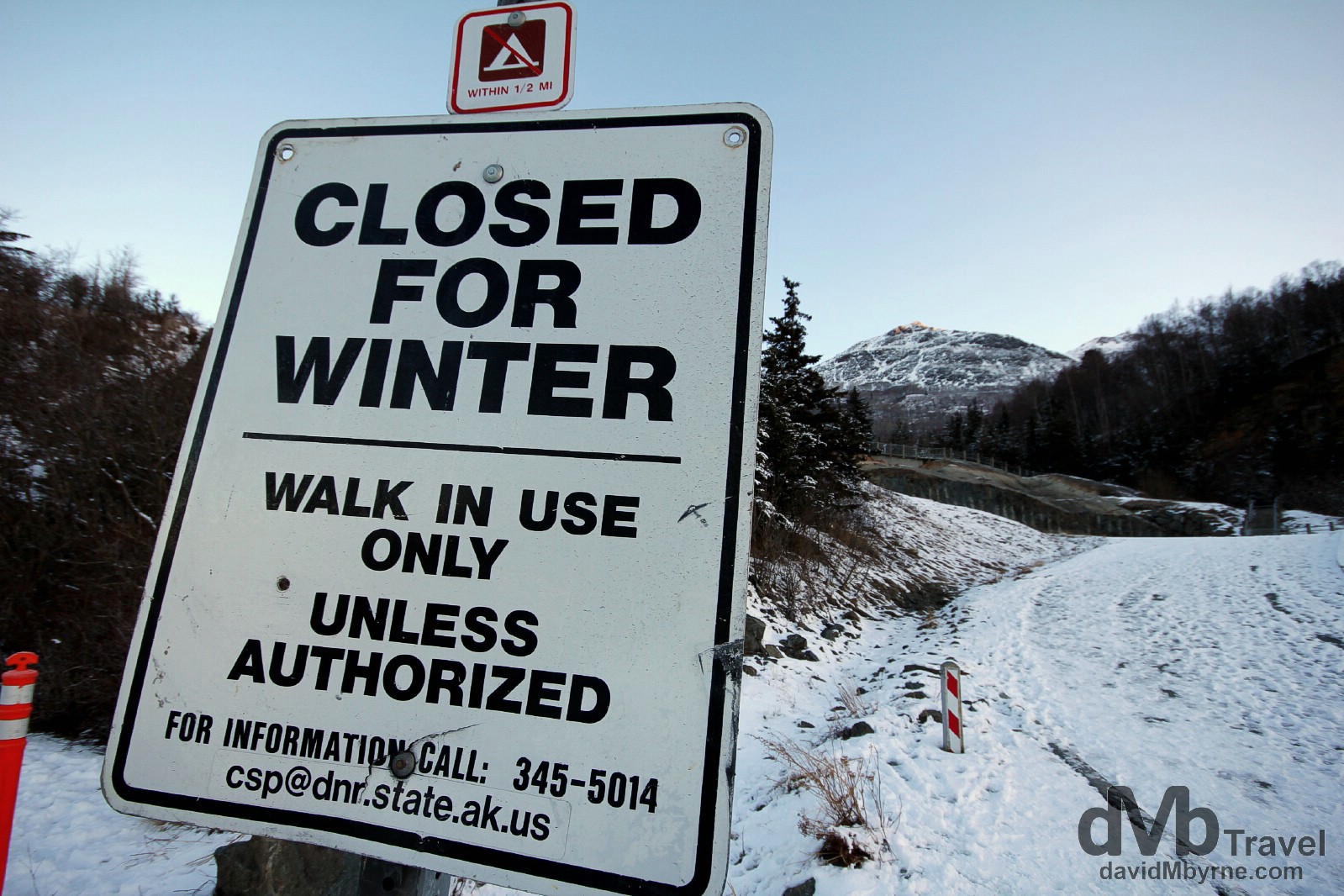 Alaska. Closed for the winter. Gone is the warm, golden sand of Hawaii, replaced with an abundance of cold, glaring white snow & ice of Alaska. Gone too is the beach attire of shorts, t-shirts & flip-flops, replaced by the fleece, jeans & boots I lugged around Hawaii for the last 2 weeks. Coming here was quite a jolt to the system but, & all things considered, the system is doing just fine. It’s a quiet time to visit Alaska meaning its probably the best time. On the Seward Highway, Kenai Peninsula, Alaska, USA. March 12, 2013.

Having landed from Hawaii in Ted Stevens International Airport in Anchorage very early this morning, I waited around for the car hire desks to open. I had plenty of time to reality check the fact that I was in Alaska. It felt great, even if at the time I was staring at the almost-empty arrivals hall of a not particularly attractive airport. But at least I had a bear to keep me company.

Once the car hire desk opened I was quickly on the road. It was still very early. It was still dark but brightening fast. It was cold & I was tired, having travelled through the night to get here from Hawaii. But I was pumped – I was in Alaska &, better still, I was just about to embark on one of the world’s most scenic drives, the 200 kilometre All-American Seward Highway.

The Seward Highway || An All-American Road

The Seward Highway was completed in 1951 and is a designated All-American Road, one of only 31 roads found in 46 of the 50 US states that have been deemed to meet two of six “intrinsic qualities”, they being archeological, cultural, historic, natural, recreational, and scenic. (A National Scenic Byway, of which there are 120 in the country, satisfy one of the aforementioned criteria. An All-American designation means the routes boast features that do not exist elsewhere in the US and are unique and important enough to be tourist destinations unto themselves.) Connecting Anchorage to Seward on Alaska’s scenic Kenai Peninsula and running through the scenic Kenai Peninsula, Chugach National Forest, Turnagain Arm, and Kenai Mountains, for the first 140 kilometres out of Anchorage the highway is numbered Alaska Route 1 (AK-1). It then meets the junction with the Sterling Highway – which leads to Homer, another upcoming stop on my Alaskan itinerary – and continues the remaining 60 kilometres to Seward as Alaska Route 9, AK-9. Regardless of the route name or number, it’s a stunning drive especially if the weather plays ball, just like it did for me today. In good weather the drive could be done in 2-3 hours but with stops along the way – and you should stop along the way – it’ll take longer. It should take longer. This is a route to savour. To appreciate at leisure. Don’t rush it. Oh, and don’t forget your camera either. Here are a few pictures I captured en route to Seward earlier today, my first day in Alaska.

Seward Highway showcases the natural beauty of south-central Alaska between Anchorage and Seward. From jagged peaks and alpine meadows to breathtaking fjords and crystal lakes, find a concentrated series of diverse landscapes and experiences. 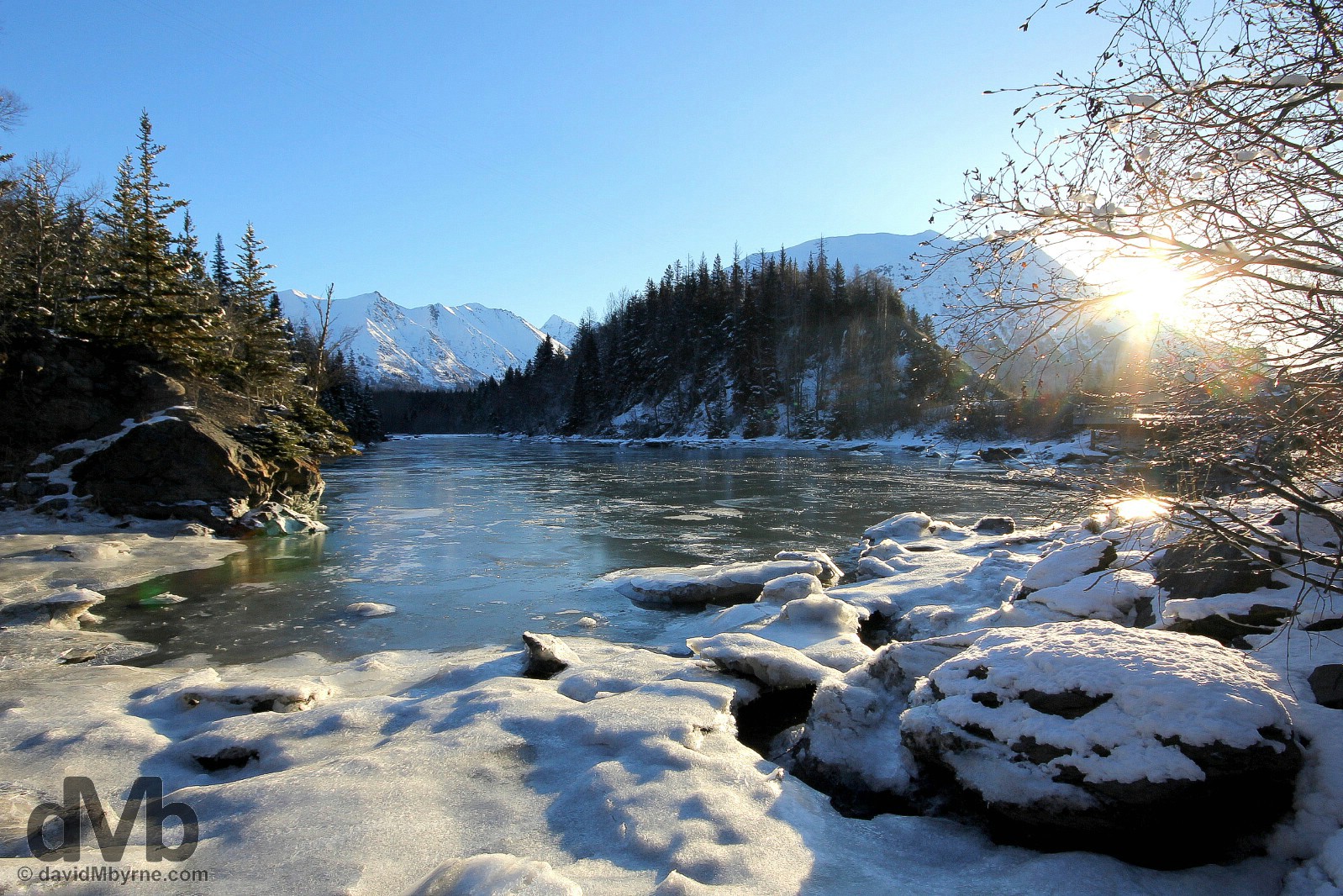 08:48 || Bird Creek on the Seward Highway, my first stop out of Anchorage. A bridge over the creek gave me a fleeting glimpse of it as I drove the highway. So I pulled over, drove back, parked the car by the side of the road and scrambled down a snowy slope to get this picture – I was standing precariously on the edge of the frozen creek when doing so. The sun was just peaking over the mountain in the distance, providing the first rays of intrusive yet gorgeous light. It was a stunning scene. Bird Creek on the Seward Highway, Alaska, USA. March 12, 2013. 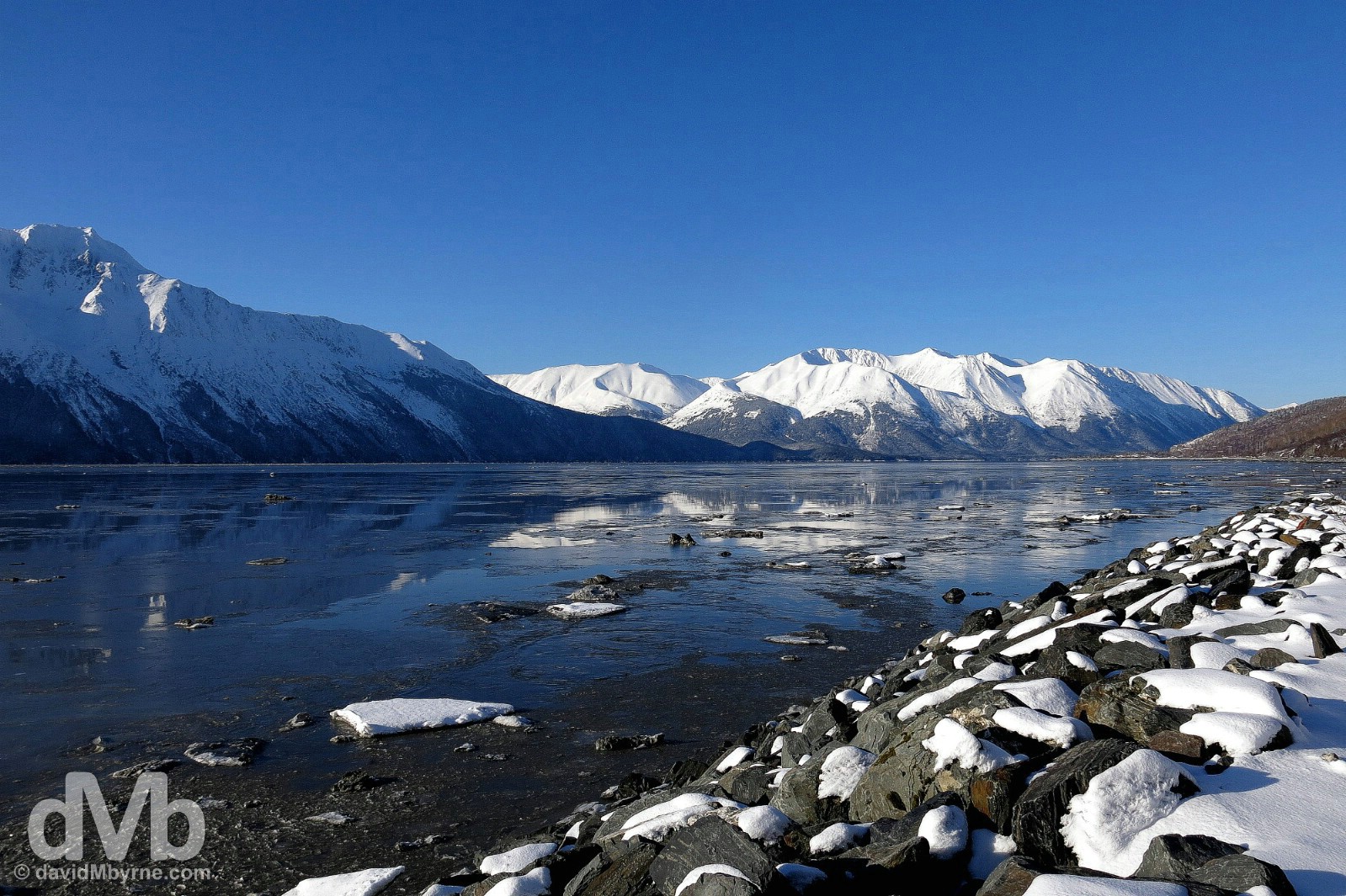 09:15 || Turnagain Arm of Cook Inlet as seen from the Seward Highway. Turnagain Arm is a narrow and shallow branch off of the larger Cook Inlet, a 290 kilometre watershed named after Captain Cook who sailed into it in 1778 while searching for the Northwest Passage. After passing Chugach State Park, the Seward Highway skirts the Arm’s northern shore for some 70 kilometres, offering stunning views across to the snow-drenched peaks of the northern Kenai Peninsula. Only a short distance from Bird Creek, the sun was still low in the sky as I was capturing this image; it was awesome standing here just watching the early morning shadows slowly moving down the face of the peaks. Turnagain Arm, Cook Inlet, Alaska, USA. March 12, 2013.

Turnagain Arm’s Tidal Bore
With a mean range (the difference between the highest & lowest) of 9.2 metres (30.3 ft), Turnagain Arm sees the largest tidal range in United States and twelfth largest in the world. It’s also one of only 60 bodies of water worldwide to exhibit a tidal bore, a tidal phenomenon in which the leading edge of the incoming tide forms a wave (or waves, often dangerous) of water that travels up a river or narrow bay against the direction of the river or bay’s current – tidal bores here have been known to reach more than 2 metres (6 ft) in height and to travel at up to 25 kilometres per hour on high spring tides. While there was no tidal bore in action when I stood by the shore of the Arm this morning, there was a strong flow heading towards the Cook Inlet, to the right of the above picture & in the direction I had just travelled in driving here from Anchorage.

A short, recommended diversion off of the Seward Highway brings you to the western edge of the Portage Lake, a glacial lake in the Chugach National Forest. 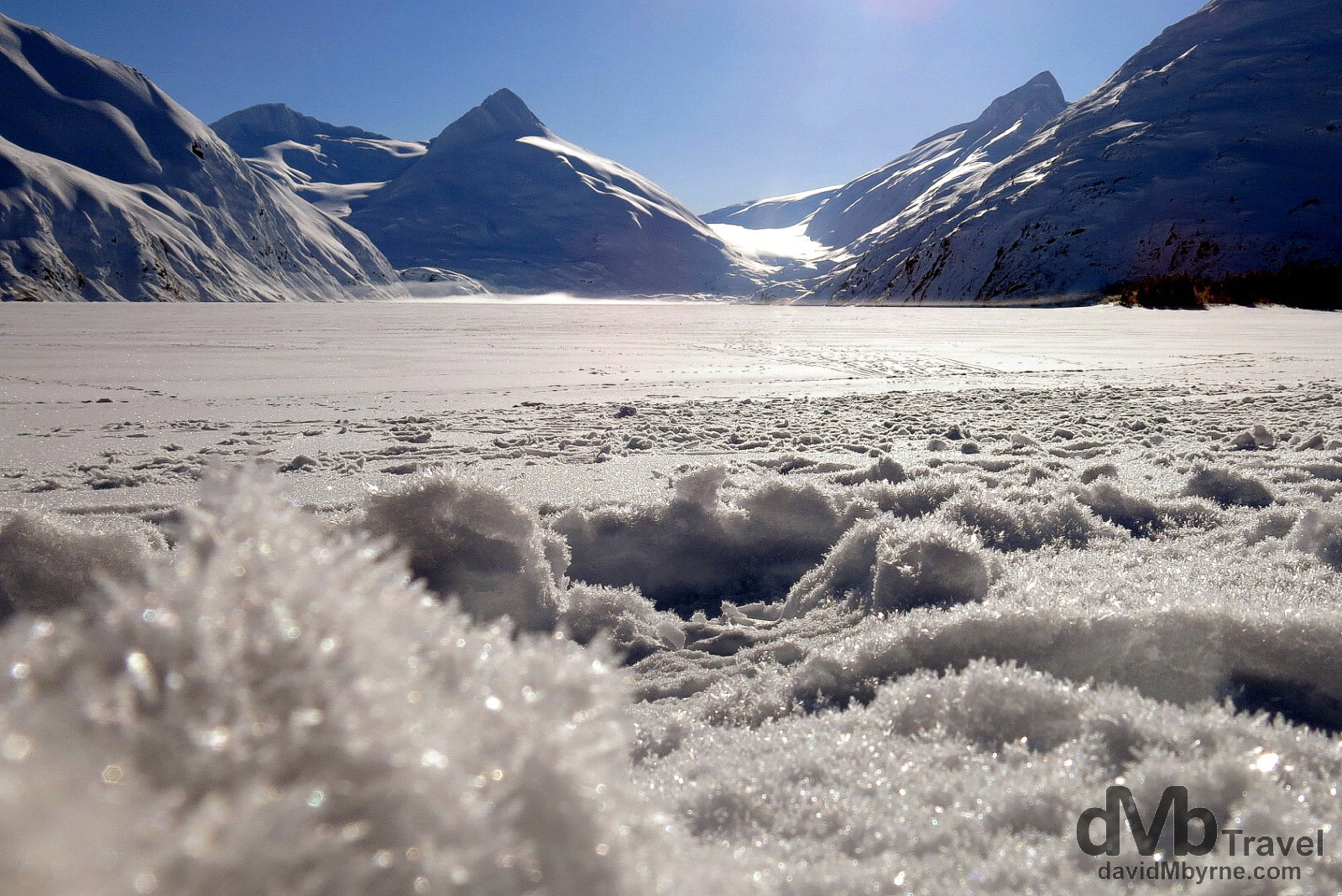 09:39 || Portage Glacial Lake sits in a long, heavily glaciated valley. The lake has only been around since 1914, the result of the retreating Portage Glacier, seen resting in the valley in the distance. Here at the western shore of the lake there is a large car park & a lakeside visitors centre, the Begich Boggs Visitor Centre. In summer the area offers cruises to the glacier face & (strictly enforced) recreational boating. Needless to say it’s a lot quieter in the winter (the visitors centre was closed when I was snooping around) and although I haven’t visited during summer I’d hazard a guess that it’s so much more beautiful in winter, too. I spent some time on the frozen lake, wallowing in the beautiful winter wonderland environment and reminding myself that less than 24 hours earlier there was sand between my toes on a balmy Waikiki Beach in Hawaii. Portage Glacier Lake, Chugach National Forest, Alaska, USA. March 12, 2013.

The rest of the journey on the Seward Highway to Seward was no less beautiful and at the end of it all a cabin awaited me on the shores of the Kenai Peninsula’s Resurrection Bay, my present location. 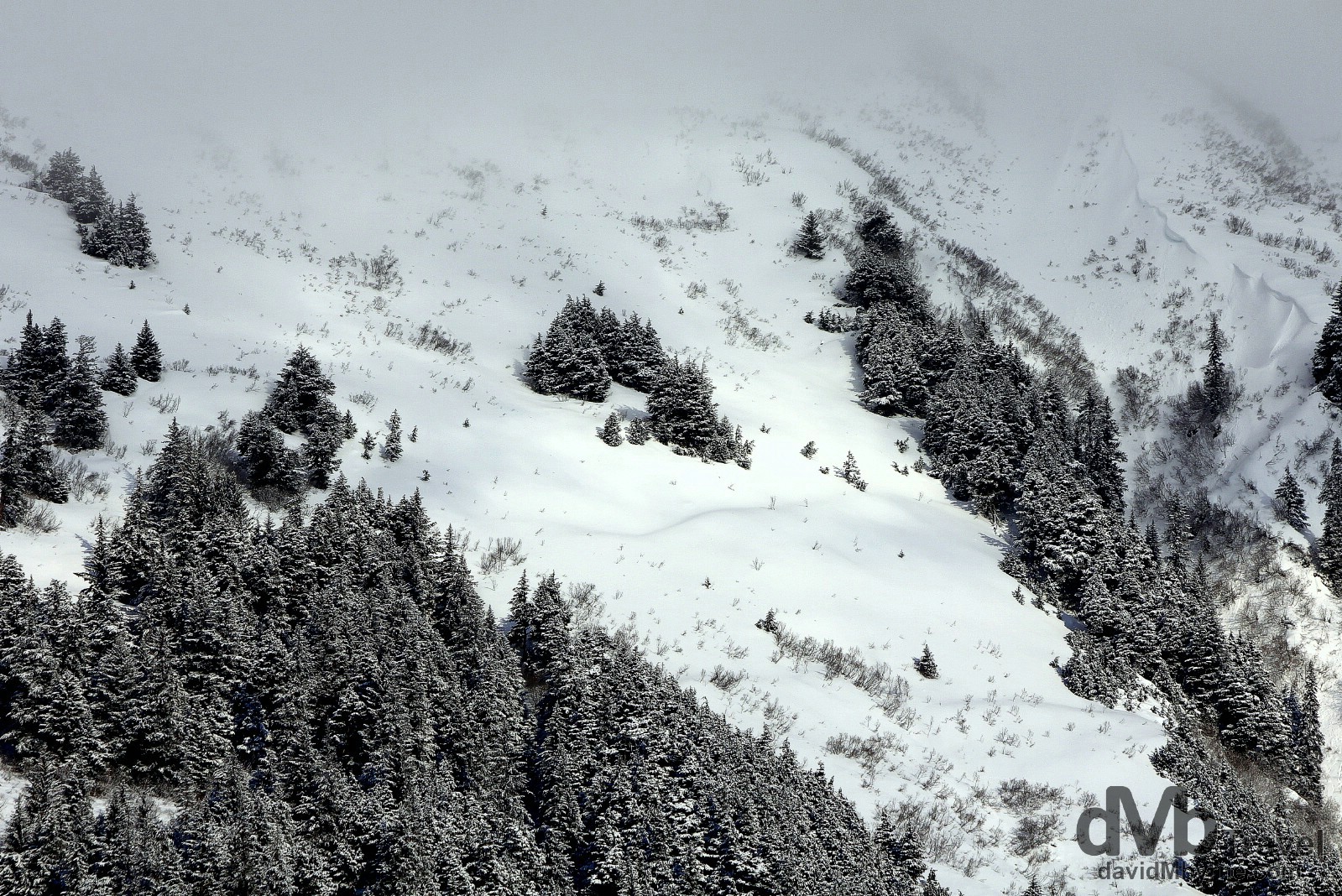 09:54 || The weather here is erratic & it changes quickly, especially at higher elevations. One minute the upper reaches of the peaks that line the Seward Highway are clear & the next the clouds roll in, as in this picture of mist & trees high on a Seward Highway mountain peak. Kenai Peninsula, Alaska, USA. March 12, 2013. 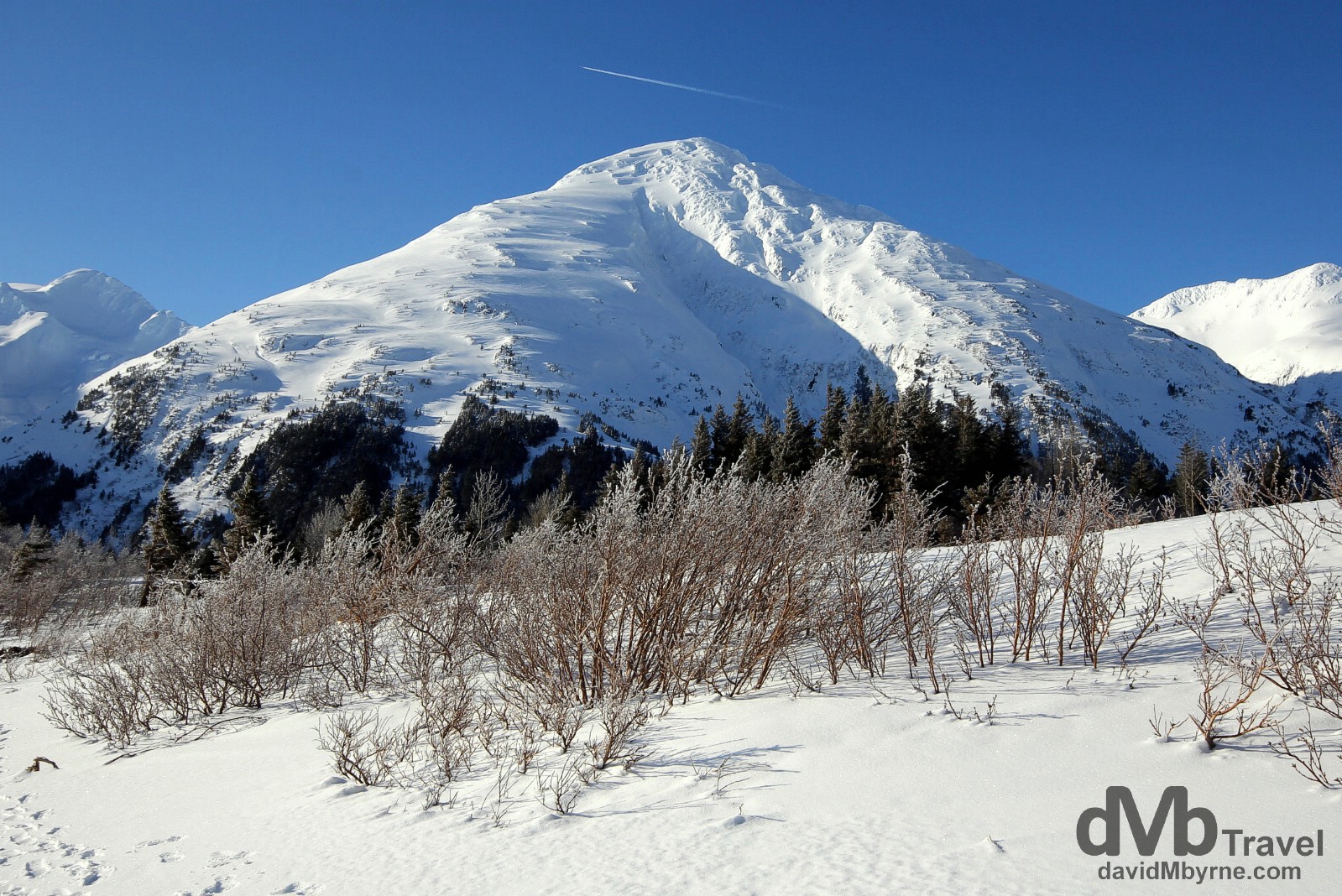 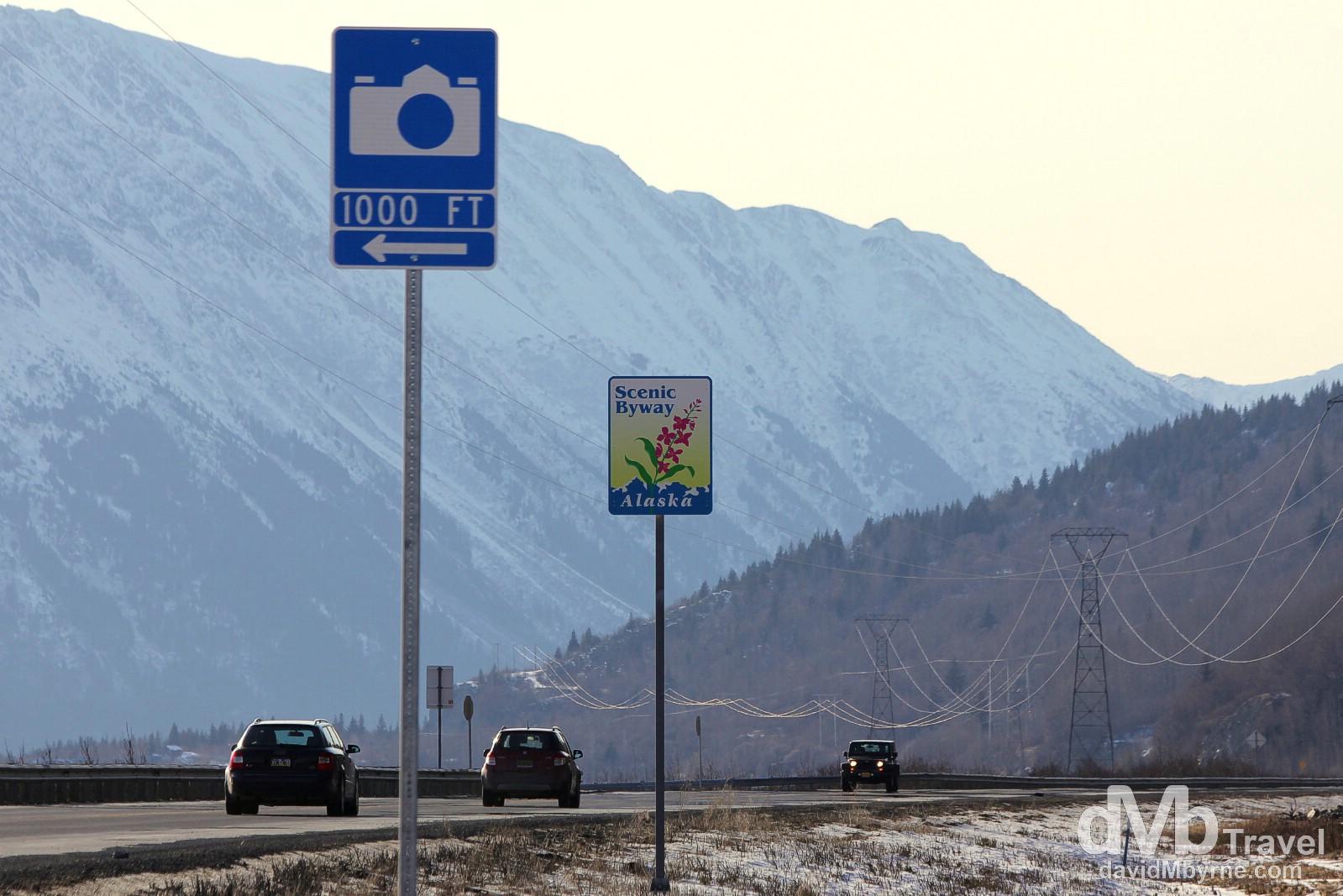 Roadside signage provides advanced warning for upcoming scenic viewpoints on the Seward Highway. I must have hit most of these scenic vista points while driving both the both the Kenai Peninsula’s Seward & Sterling Highways. This particular image, first posted in the Sterling Highway entry, was located not too far from my destination on this day of Anchorage. It was captured on my return to the city at the end of my week+ long visit to the Kenai Peninsula. Alaska, USA. March 18, 2013.