The taxi lady said we, Liam & I, wouldn’t make it. That we should have arranged for the taxi to pick us up earlier. We said we’d be grand. ‘It’s the Caribbean. The laid-back Caribbean.’ Not so laid-back as it turns out. It was 06:03 when we presented ourselves, somewhat flustered & still adjusting to the god-awful early start, at the check-in desk in Grand Cayman’s Owen Roberts International Airport. Our flight to Kingston, Jamaica, was scheduled for 07:00. But it seems they are strict on the 06:00 check-in deadline. Very strict. Even a double-barrelled Irish charm offensive didn’t work. The Cayman Airways crew steadfast refused to do anything except smile at us while highlighting the plentiful one-hour-prior-to-departure-check-in-deadline-for-international-flights signage; they even, bless them, gave us a personal copy to take away. The last thing they did was to relieve us each of US$75 for rescheduling our booking for the same flight in 24 hours’ time. Dang. 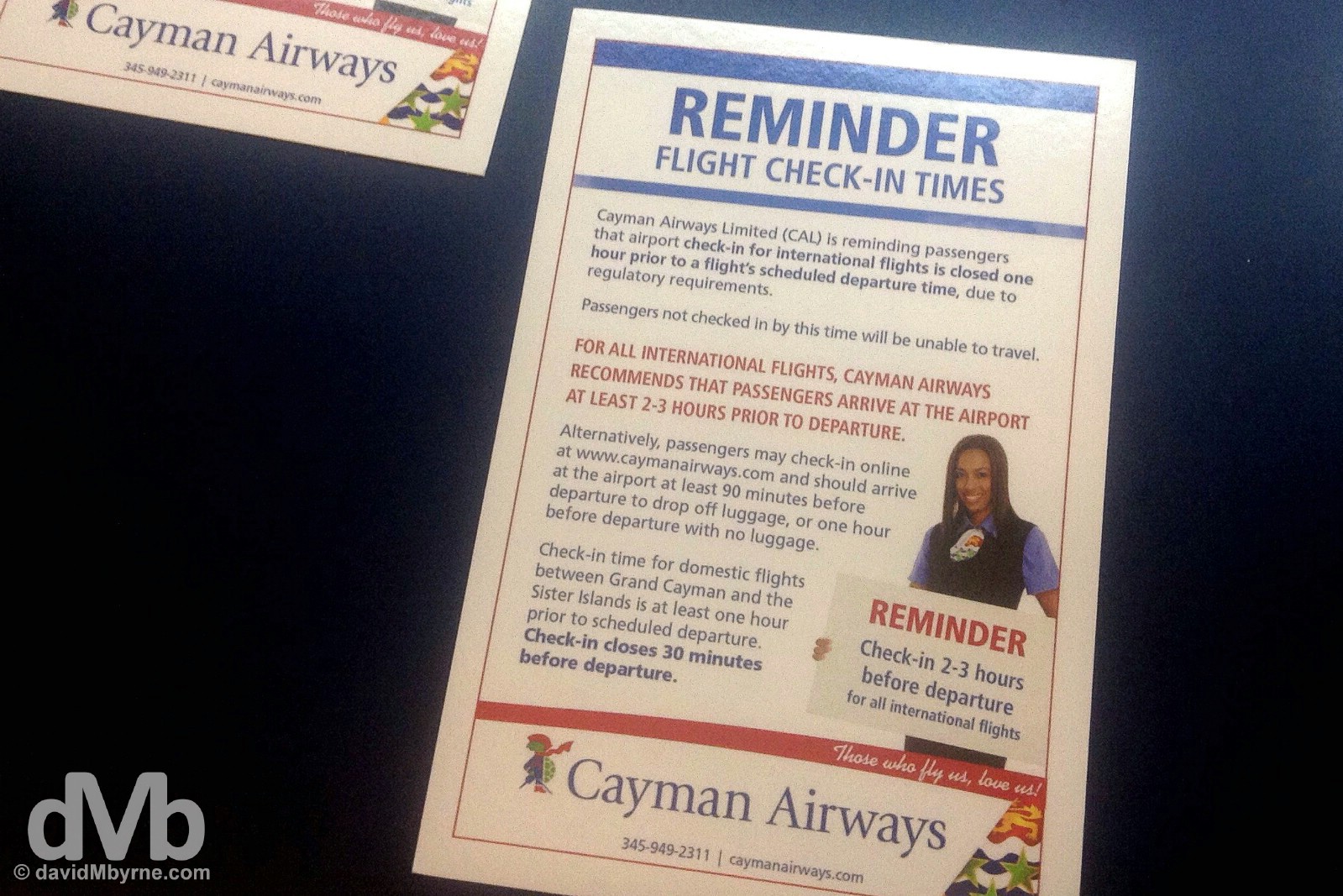 In hindsight, the missed flight was something of a blessing. It meant we got to properly see Grand Cayman, the largest of the three swish Cayman Islands. We’d only just arrived from Cuba, 240 kilometres to the north, the evening before – Grand Cayman was a 17-hour layover on route to Jamaica, 290 kilometres to the east – so hadn’t seen any of the island except for an evening stroll around its capital George Town (and with bustling & decrepit Cuba still fresh in my memory, the contrasts with quaint, sleepy, colourful & polished George Town were stark). So with an unexpected 24 hours at our disposal, nothing to do & nowhere to go, we hopped on the airport Wi-Fi, hired a car, waited for the car hire office to open, drove back to our hotel to secure a room for one more night, & promptly set out to tour the island, something easily accomplished in a day – the 190 km² island measures no more than 35 kilometres long by 13 kilometres wide. So, and as it turned out, we managed to ‘Escape for a day’ on Grand Cayman by failing to escape the island in the first place.

Don’t be afraid to step outside your hotel room or condo and really explore the island. Each district has its own unique vibe, with sea vistas, historical landmarks, glorious beaches, lush vegetation, and the rugged, natural beauty of the iron shore.

– Don’t mind if we do. Advice from the free ‘Escape for a day’ foldout map I acquired while on Grand Cayman.

First sighted by Christopher Columbus on his fourth & final voyage to the New World in 1503, the three islands of the Cayman Islands, the flat tops of three pinnacles reaching up from the depths of the Cayman Trench, remained uninhabited save for turtles, lizards & alligators until the 1660s, shortly before the 1670 Spanish-British Treaty of Madrid that officially decreed the islands a British possession and a dependency of Jamaica. The islands were not permanently settled until the 1730s, the earlier wannabe settlers of the 1660s having fled following attacks by pirates, marauders who continued to use the islands thereafter to repair their damaged ships and stock up on water & turtle meat.

Shipbuilding was once a major source of income for the islands but since the early 1950s, when the first commercial bank was established on Grand Cayman & legislation enacted to grow the banking industry in the tax-free economy, it has been all about money (& to a lesser degree tourism); there are now over 400 banks and 100 trust companies licensed on the islands, a staggering number given their collective 260 km² landmass. Today the islands are a largely self-governing UK Overseas Territory headed by a governor appointed by Her Majesty’s Government. Caymanians are proud of their constitutional links with the UK; they have resisted going their own way, even after Jamaica’s independence in 1962, and any hint that the UK may wish to divest itself of the islands is met with strong opposition. With an English-speaking population of some 60,000, up from 10,000 in the 1970s, the islands enjoy easily the highest standard of living in the whole Caribbean region, but at a cost – Expatistan.com lists Grand Cayman at 2nd, only behind Zurich, Switzerland, on its worldwide Cost of Living index. Ching ching! 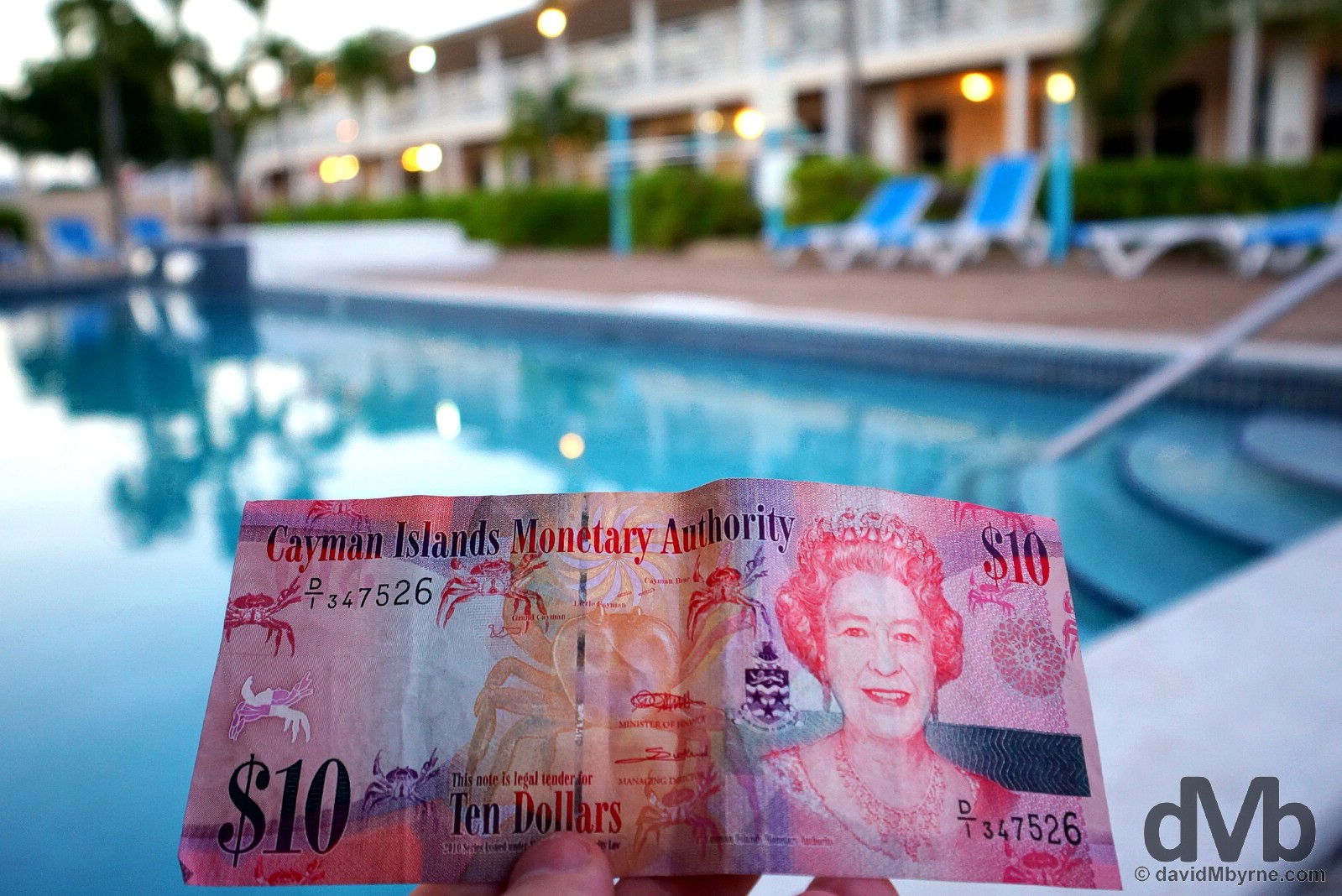 There she is, Lizzie on the Cayman Islands Monetary Authority $10 note (€10). Make no mistake, you need plenty of these here in the Cayman Islands. Picture taken by the pool of our hotel in the very early morning (05:40) while waiting for the taxi to take us to the airport to be refused check-in for the flight to Jamaica. The Riviera, George Town, Grand Cayman, Cayman Islands, Greater Antilles. May 12, 2015.

My snoop around George Town on the evening of arrival was brief. And it would have been all I saw of the island were it not for the missed flight early the next morning. 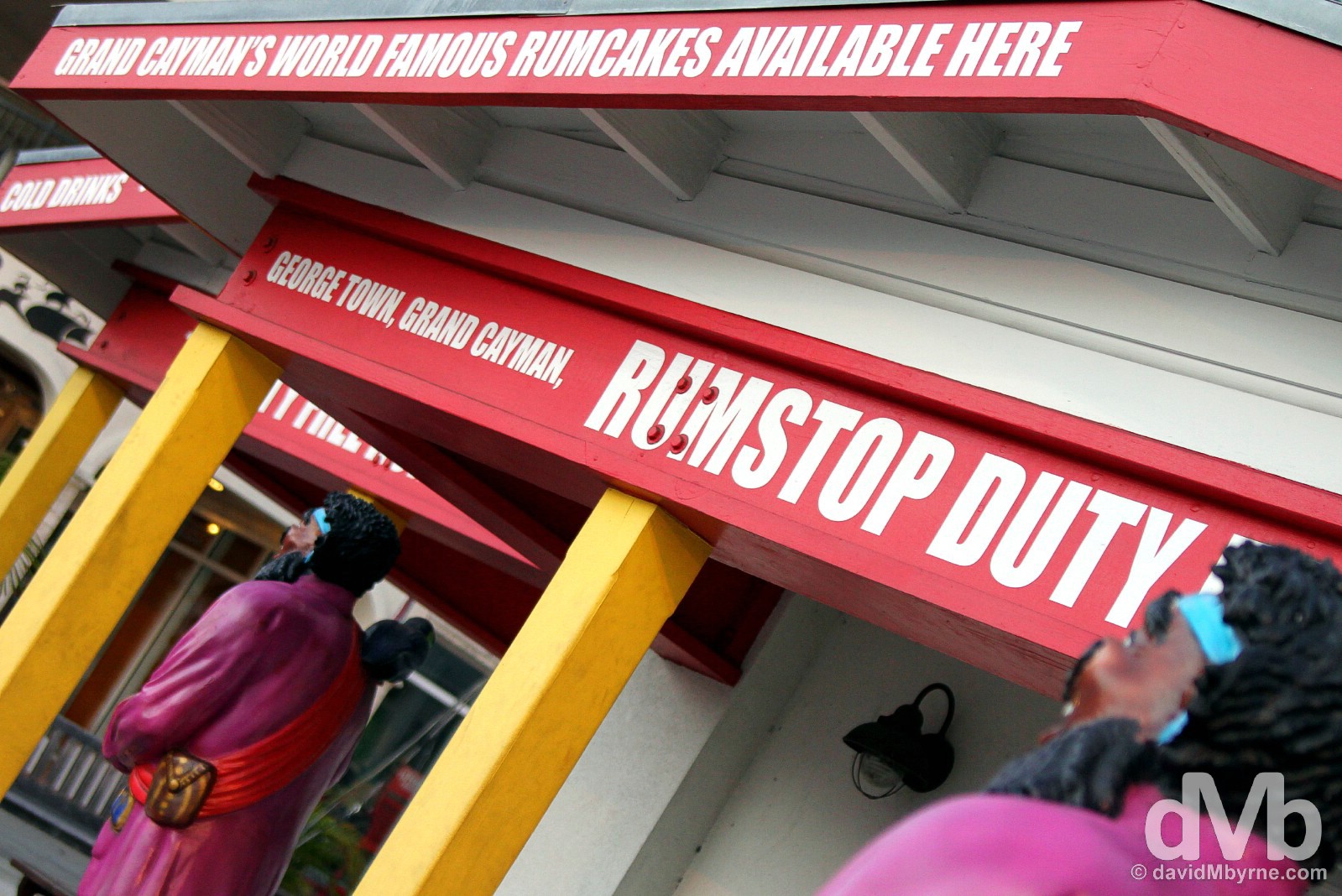 The island’s financial hub & its supremely wealthy but somewhat modest capital, George Town is awash with shops/malls, restaurants, wooden architecture & banks (of course). It’s also a rather historic place boasting a number of signposted historic sites of interest: I meandered to Heroes Square to see the Wall of Honour listing the names of 500 Caymanians who have contributed to the betterment of the island; I saw the 1937 Clock Tower built in the memory of King George V; I saw the awesome roof of the town’s 1920s Elmsile Memorial Church, named after a Presbyterian missionary who preached in Cayman in the 1840s; and I poked around the small 18th century, but restored in 2014, Fort George that defended Grand Cayman from Spanish marauders and pirates – it also boasts a small replica lookout used by the Home Guard during World War II to watch for German submarines. I saw and enjoyed all that late in the afternoon/early in the evening at a time when George Town was very quiet, eerily so; I hear the town is anything but quiet when the cruise ships dock. I’m glad I missed that spectacle, and my flight. 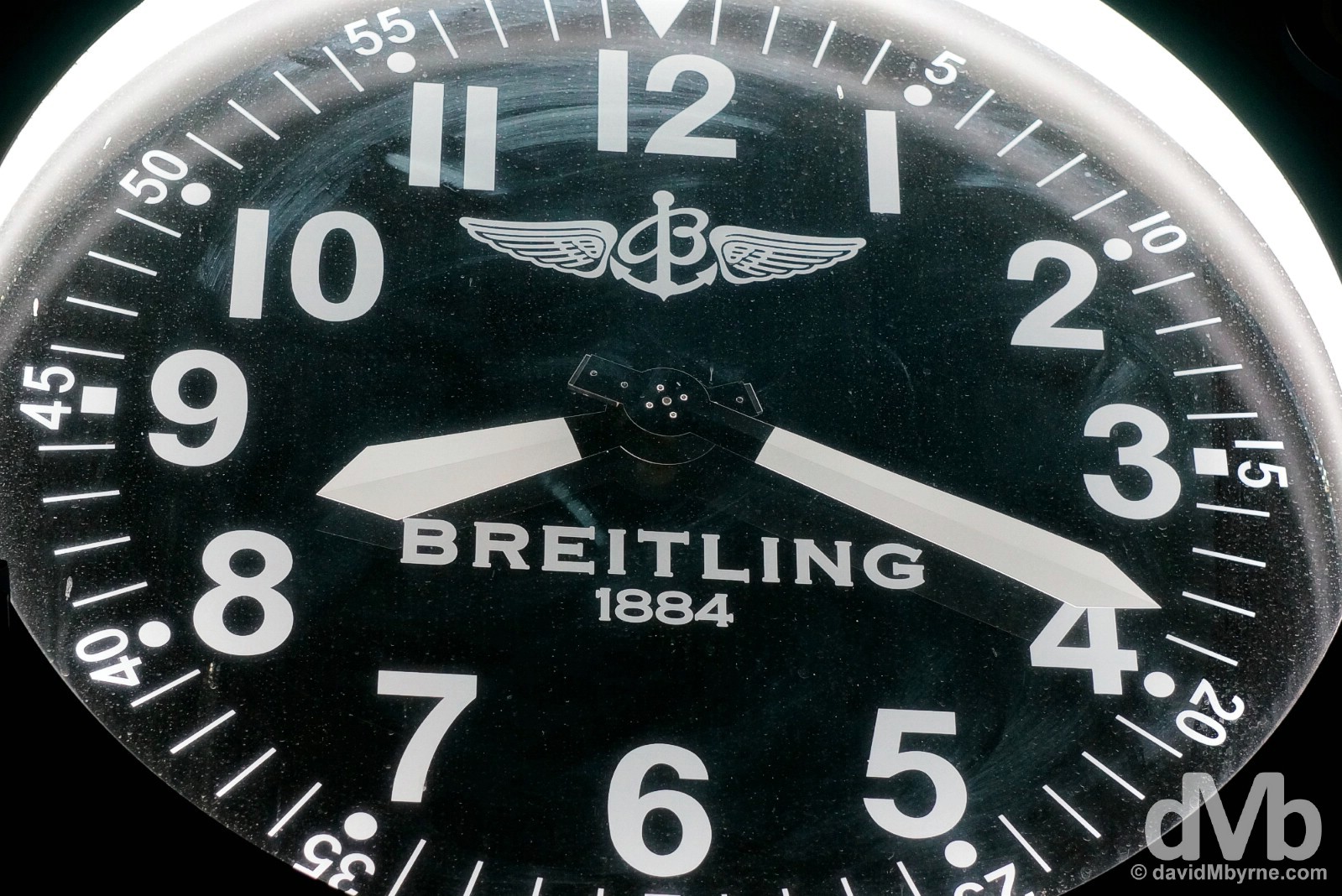 Approaching 20:20 in George Town on what I thought was to be my only evening in town. Even the public timepieces in the Cayman capital are Breitling. Ching ching indeed. George Town, Grand Cayman, Cayman Islands, Greater Antilles. May 11, 2015.

OK, so a disclaimer. We didn’t visit West Bay’s Cayman Turtle Farm (a place where endangered sea turtles are raised to be slaughtered for meat, according to Lonely Planet) or the world-famous Stingray City, the island’s top attraction where you can swim with Southern Stingrays in an area sheltered by a reef. But we did drive the whole island in our white Hyundai Tuscon, amply killing the day we had at our disposal. And it all started off with a dip in the warm waters of the island’s undisputed jewel, the oh-so fabulous Seven Mile Beach. 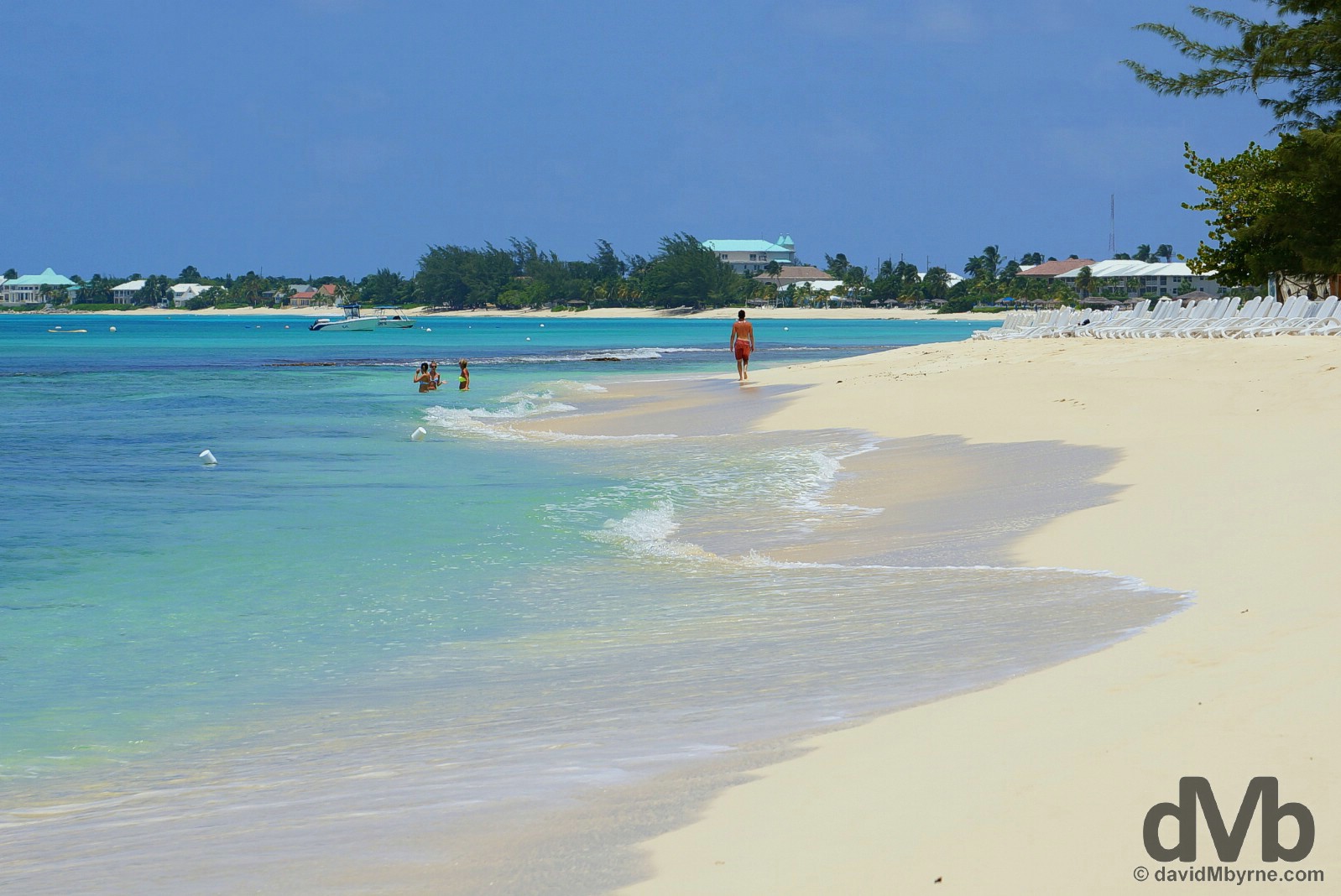 Seven Mile Beach on Grand Cayman, the Cayman Islands, Greater Antilles. May 12, 2015. || Only a little over a day removed from the thumping streets of Havana, Cuba, & the best of the Caribbean’s inviting azure seas & blinding white-sand beaches hits me lovingly in the face right here on the fabulous white coral-sand of Seven Mile Beach (it’s actually only 5.5 miles long). Located on Grand Cayman’s commercialised western coastline just north of George Town, nowhere is the rapid growth in construction on the island, which began during the 1980s to meet the demand for new homes, hotels and condominiums, more evident than here; compared to the rest of the (very) low-key island, this is the most crowded and most developed area of Grand Cayman boasting as it does the largest concentration of high-end, beach-facing resorts & visitors on the island (that said it’s anything but crowded). It’s also the island’s best beach. By far. Indeed Caribbean Travel and Life Magazine, among others, claim it the best beach in the whole Caribbean, quite the call given the competition. I tend to agree. While not a beach bum, I did spend a lot of time while in the Caribbean walking with not a care in the world – flip-flops in one hand, camera in the other – from one end of idyllic stretches of soft Caribbean sand to the other. This was easily my favourite beach. I mean, look at it. And not a tout/hawker in sight.

Life in the Cayman Islands is pleasantly laid back, although not as slow-paced as other Caribbean islands. Unlike many tourist destinations, there is no “beach-hawking” culture; topless bathing is illegal, and wearing swimsuits off the beach is frowned on, although casual dress is acceptable. 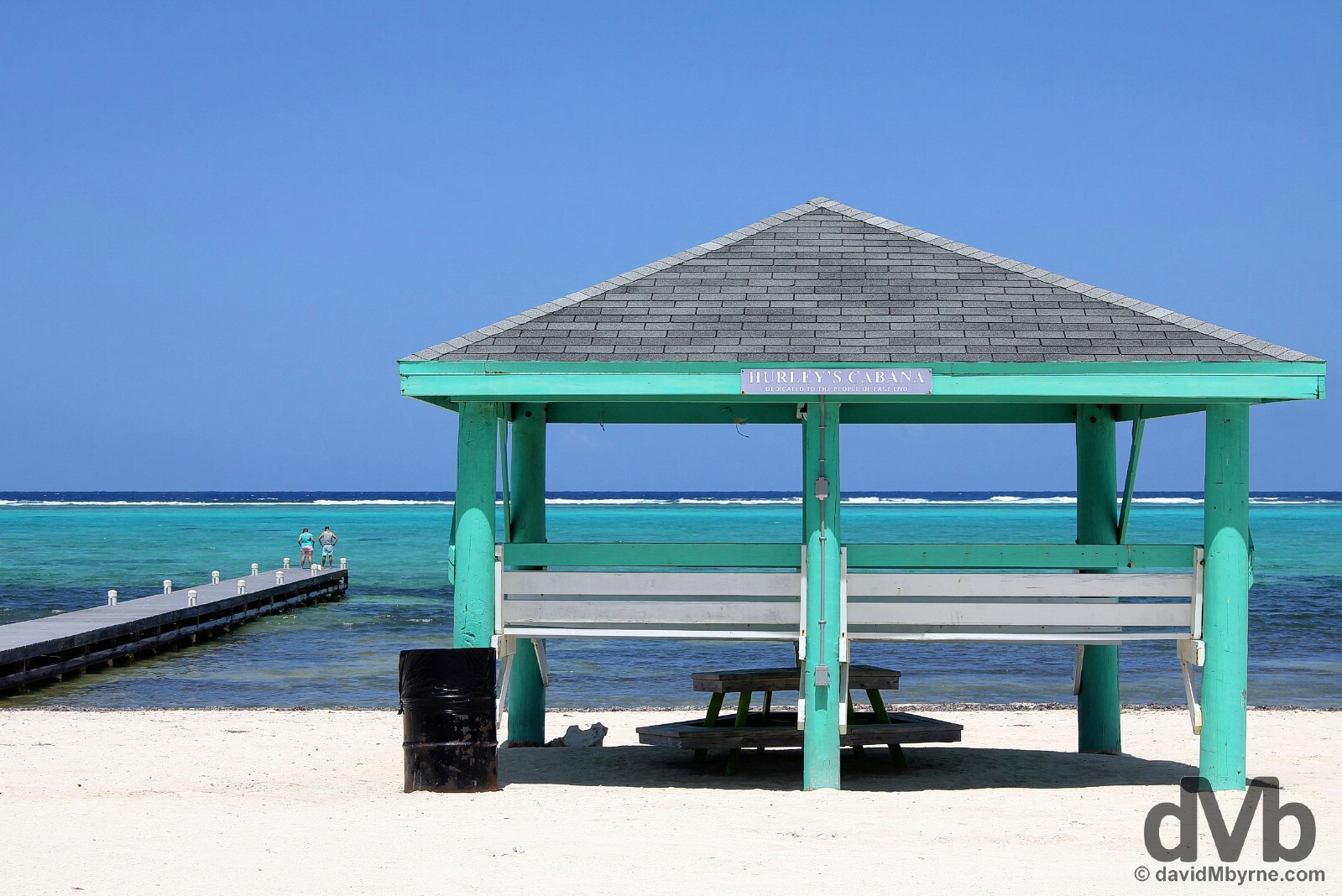 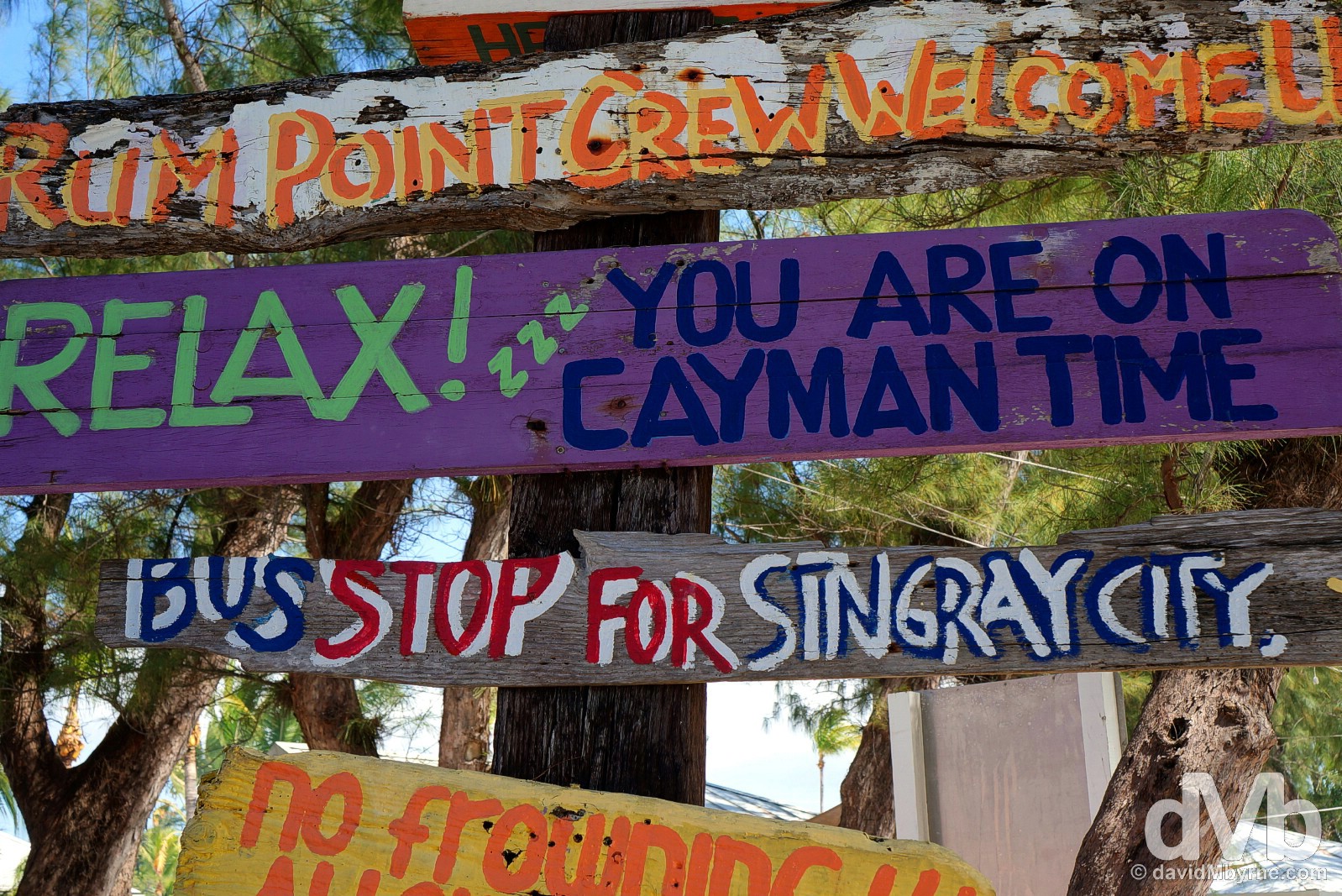 Rum Point, Grand Cayman, Cayman Islands, Greater Antilles. May 12, 2015. || The island’s North Side Road, hugging its windswept reef-protected northern shore, ends at Rum Point. Once called Great Point, it has been known as Rum Point since the grounding offshore of a schooner carrying rum in late 1913, or so the story goes. Popular with locals and residents & not accessible by the island’s mini-bus system, this is seemingly the place to come on the island for the best snorkeling & to sip a world-famous mudslide (not too sure who designated them as such) while swinging in a hammock. The area does certainly promote a laid-back, fun-filled vibe. 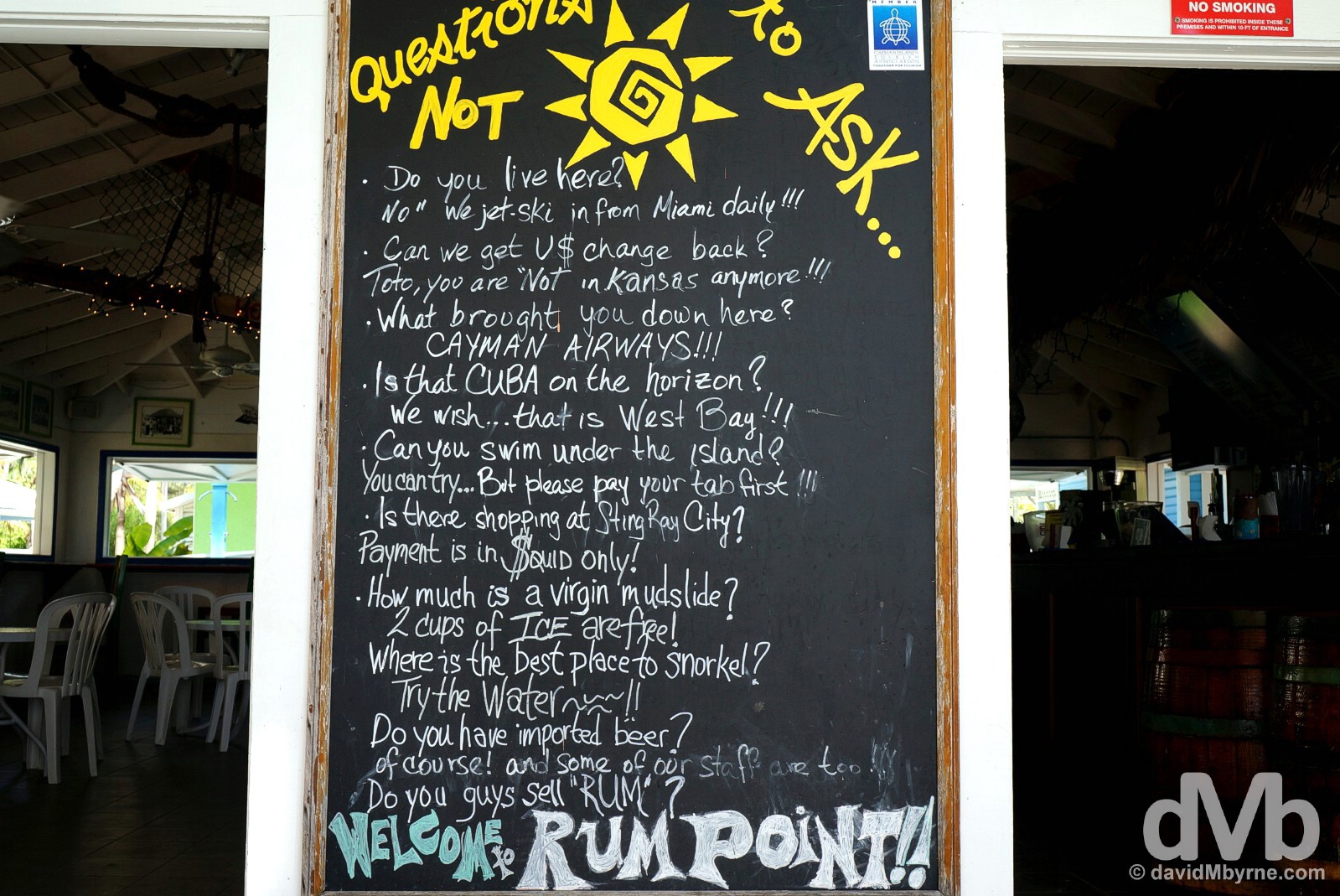 There’s no such thing as a stupid question, just silly answers. Those who work at Rum Point’s well-known The Wreck Bar & Grill are a sarcastic bunch. Rum Point, Grand Cayman, Cayman Islands, Greater Antilles. May 12, 2015. 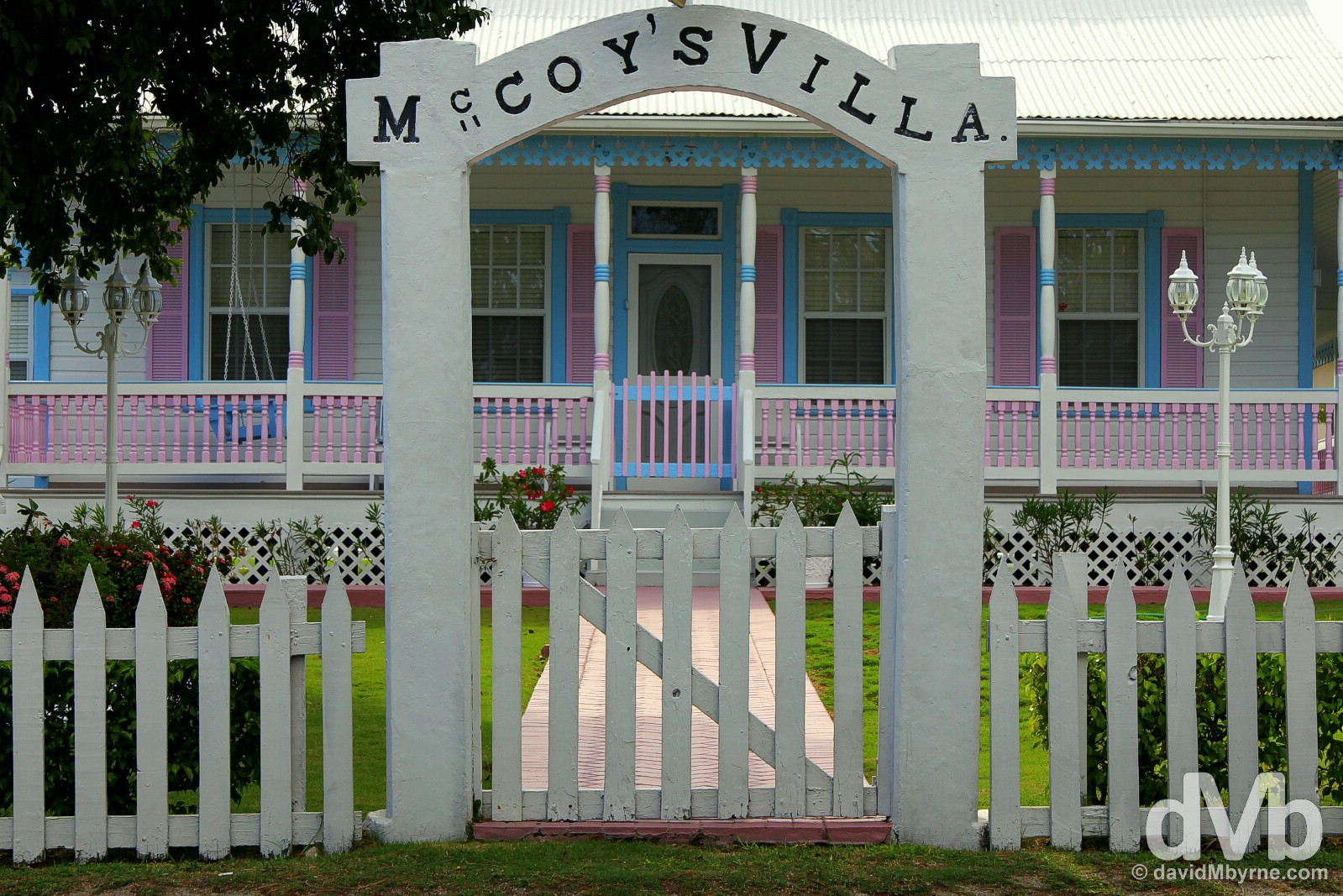 We needed two attempts but we eventually got our Caribbean island-hopping flight to Jamaica, making sure this time that we made check-in with sufficient time to spare.