An 800 km Scenic Route Traversing The Tibetan Plateau, a.k.a. The Roof of the World

Day 2 Low || Falling off the wagon 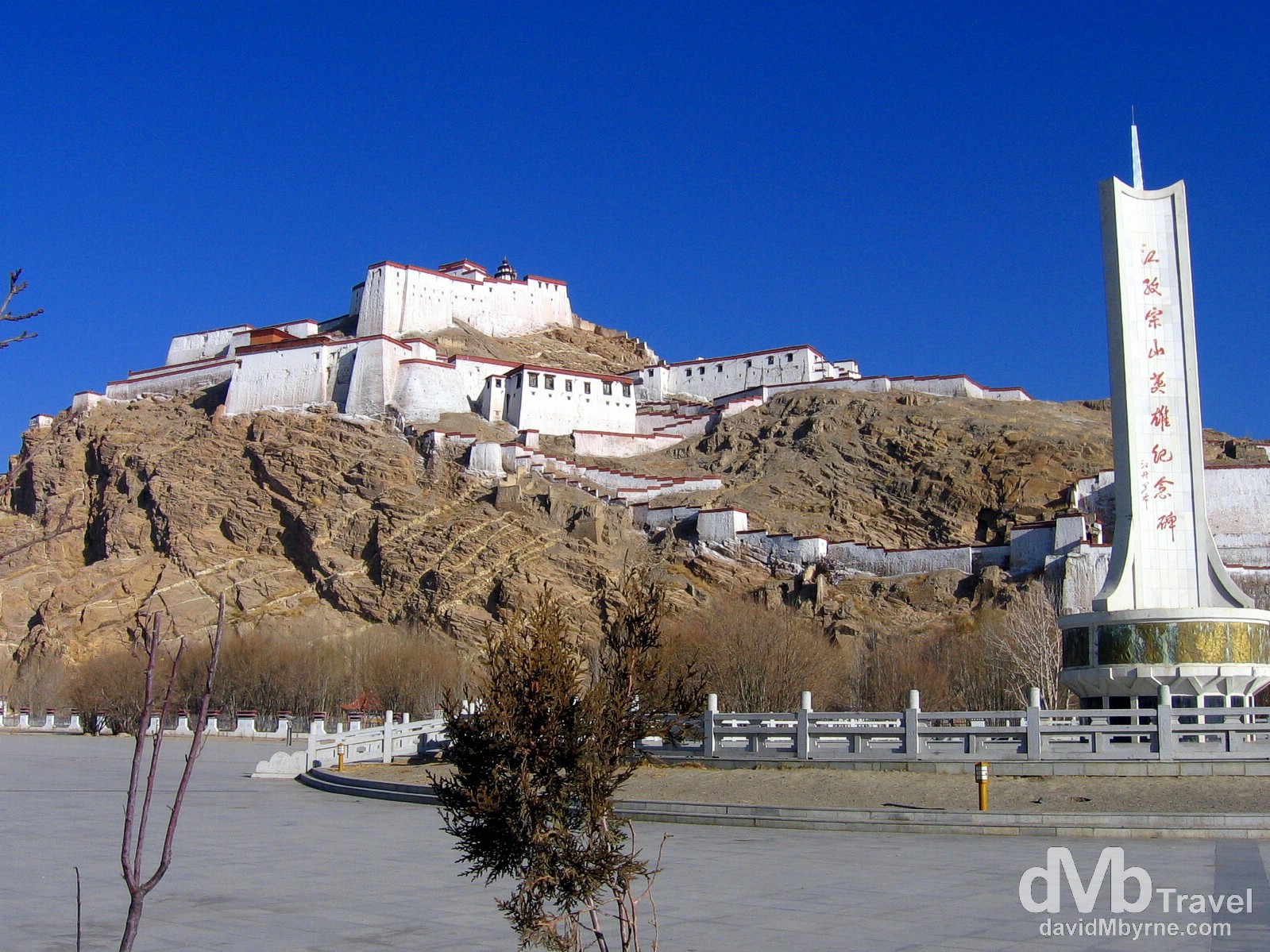 Gyantse || The Redemption
Before we left Gyantse earlier this morning for our present location of Shigatse we paid a visit to Dzong, Gyantse’s Old Fort. It looks impressive from ground level from where it hints at offering nice views. Of course it’s only after you make the effort to get to the fort’s highest point that it becomes apparent just how good the views it affords are. And who knows, when you do make it all the way to the top you might even be in agreement with us that hey, Gyantse isn’t all that bad after all, at least not from 400 ft up where the the views of the town and the surrounding valley are truly amazing, especially on a crystal-clear day like today. 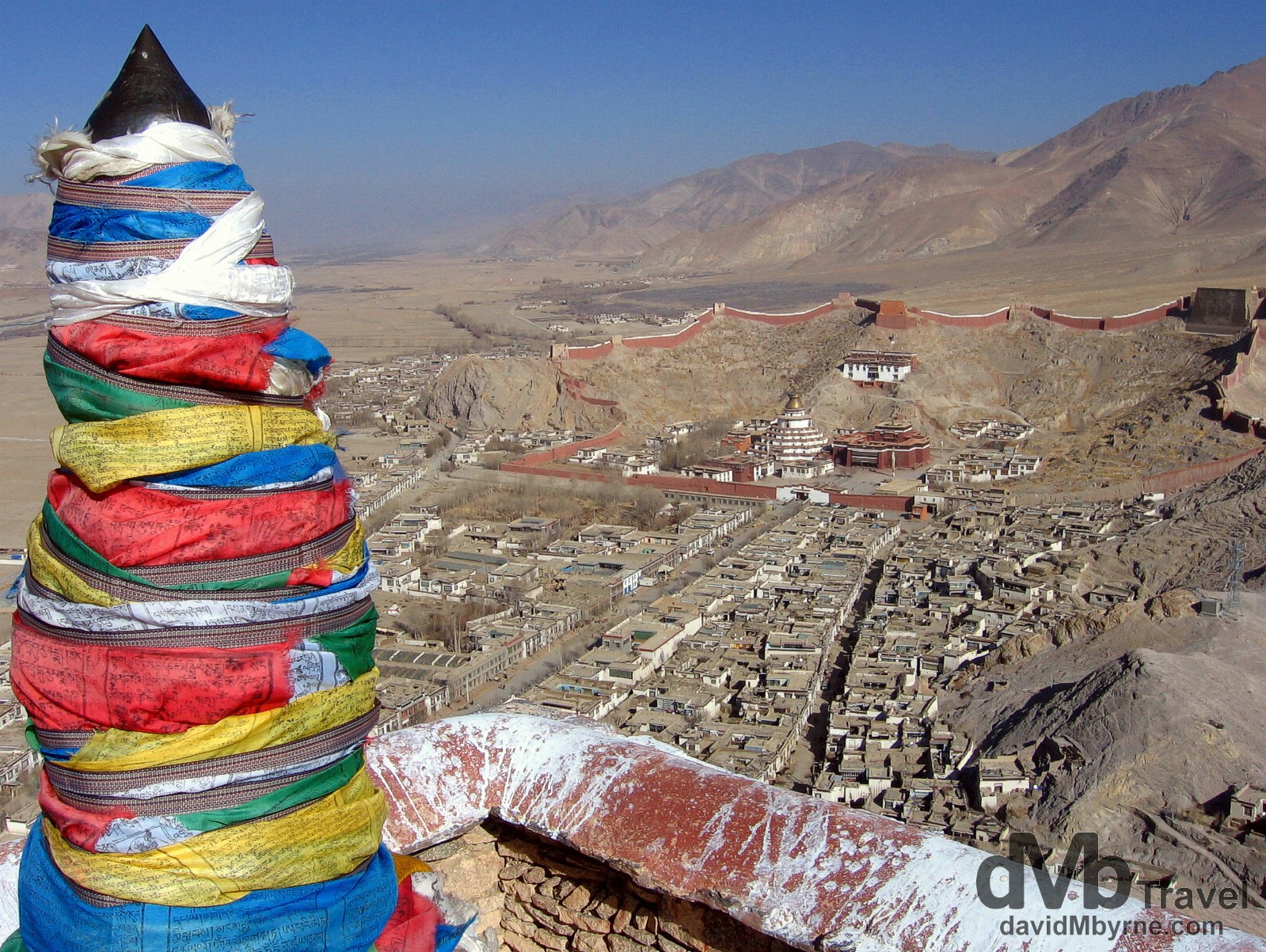 Day 2 || 11:04 || The fort was built to guard the Nyang-chu valley (seen here) that the town of Gyantse is strategically located in, a town referred to as the “Hero City” because of the resistance of 500 Tibetan soldiers to a British invasion in 1904. The aforementioned 500 soldiers were, after holding out for several weeks, finally overcome by the superior equipment of the British – many of them jumped to their deaths from the fort walls. In the distance can be seen the Pelkhor Chode Monastery where we were frisked my monks the day previous. The view from atop Dzong, the Old Fort in Gyantse, Tibet. March 1, 2008 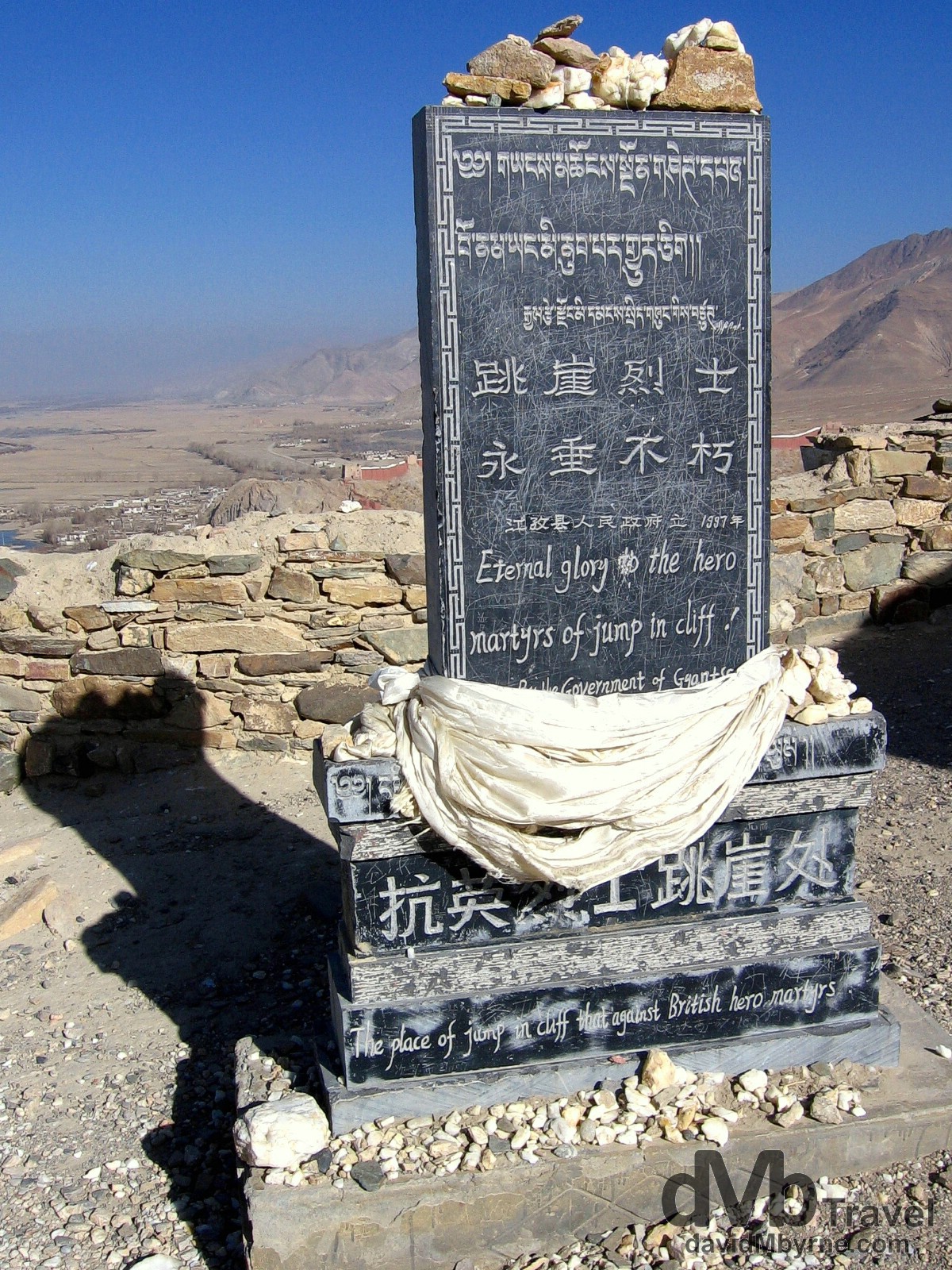 Shigatse || One Hour
One hour. That’s all we spent in the jeep today getting from Gyantse to Shigatse, Tibet’s second largest town (I’m disagreeing with our guidebook which classes it as a city) & the former home of the Panchen Lamas. Something tells me the next few days won’t be so agreeable to our asses (as in buttocks, not pompous fool or hardy & sure-footed animal smaller and with longer ears than the horse) but for now we’re wallowing in the warmth of our heated Shigatse hotel room having just let ourselves down by falling off the wagon. Yep, having gotten to Shigatse a few hours ago we quickly realised that there was nothing to do here, nothing to do that is assuming you don’t want to go looking at more monasteries and if, unlike us, you haven’t had your fill of Buddha statues, frisking monks and rabid-looking stray dogs. So with nothing to do we did what we do best – we went drinking. Don’t think badly of us. As I said previously maybe we’re taking this whole altitude sickness prevention thing too seriously anyway. That and the fact that Shigatse seems to be the sort of place that drives people to drink. It started off innocently enough. Having checked into our €12-a-night hotel room we had the shower we didn’t have in our Gyantse icebox hotel earlier in the day before we went out to have a look around and see what Shigatse has to offer. Not much as it turned out. We wandered here, we wandered there and before we knew it we were sitting on the side of a road drinking the daemon beer. That proved to be quite the spectacle for the passing locals, who we doubt see many foreigners at all, never mind foreigners who sit by the side of the road sipping beers. We had fun too, and so did a few locals, & that’s all that matters. 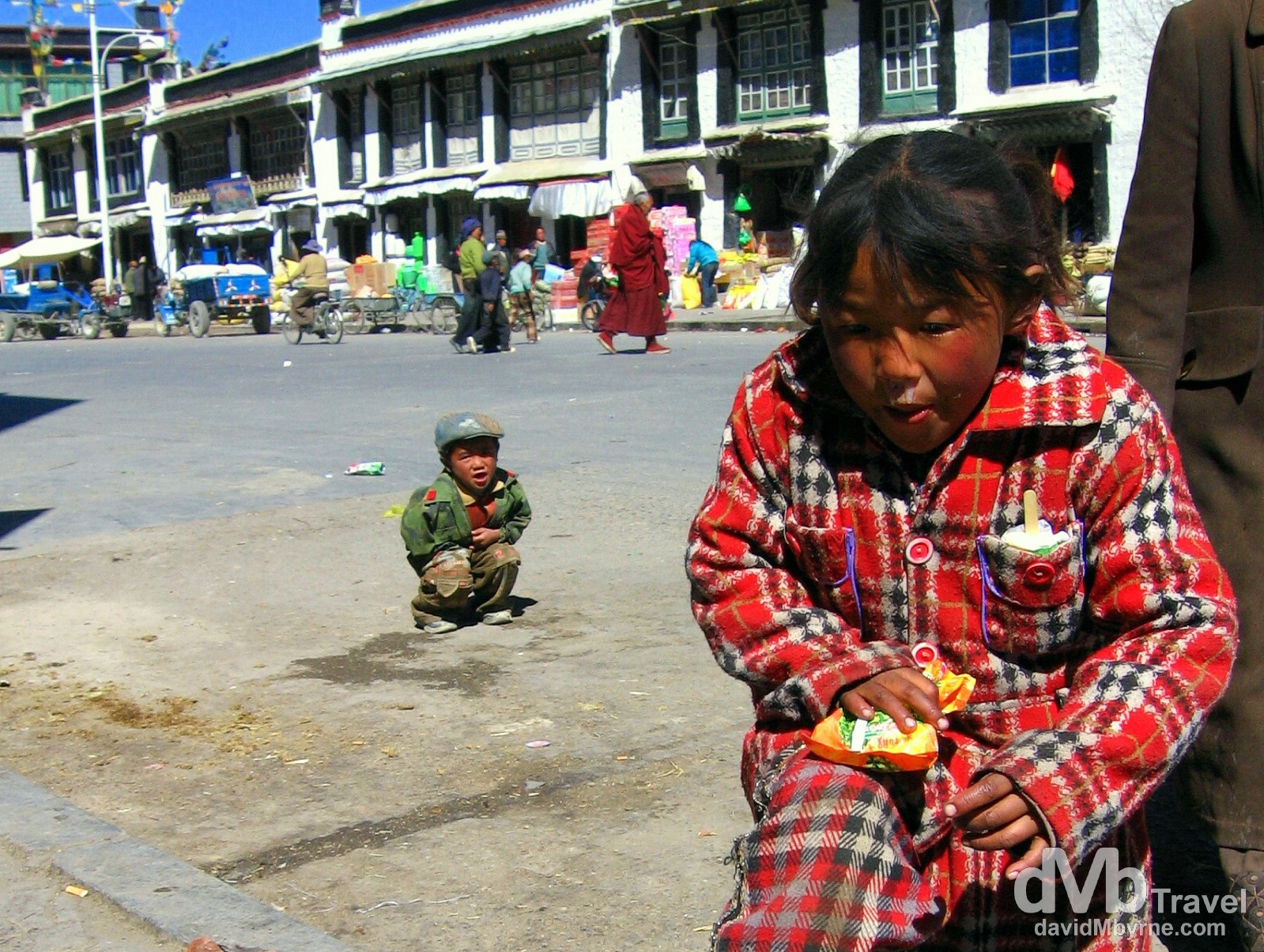 Seen Today On The Streets Of Shigatse
Try these for size: goat carcasses; people sitting on the side of the road attached to intravenous drips (no sign of a hospital); pool tables on street corners; souvenirs made out of human skulls (it’s “OK” we were told by the lady manning the stall, “Nepalese people, no Tibetan”); and not forgetting the two westerners drinking Snow beers, getting sunburn and watching the world go by. 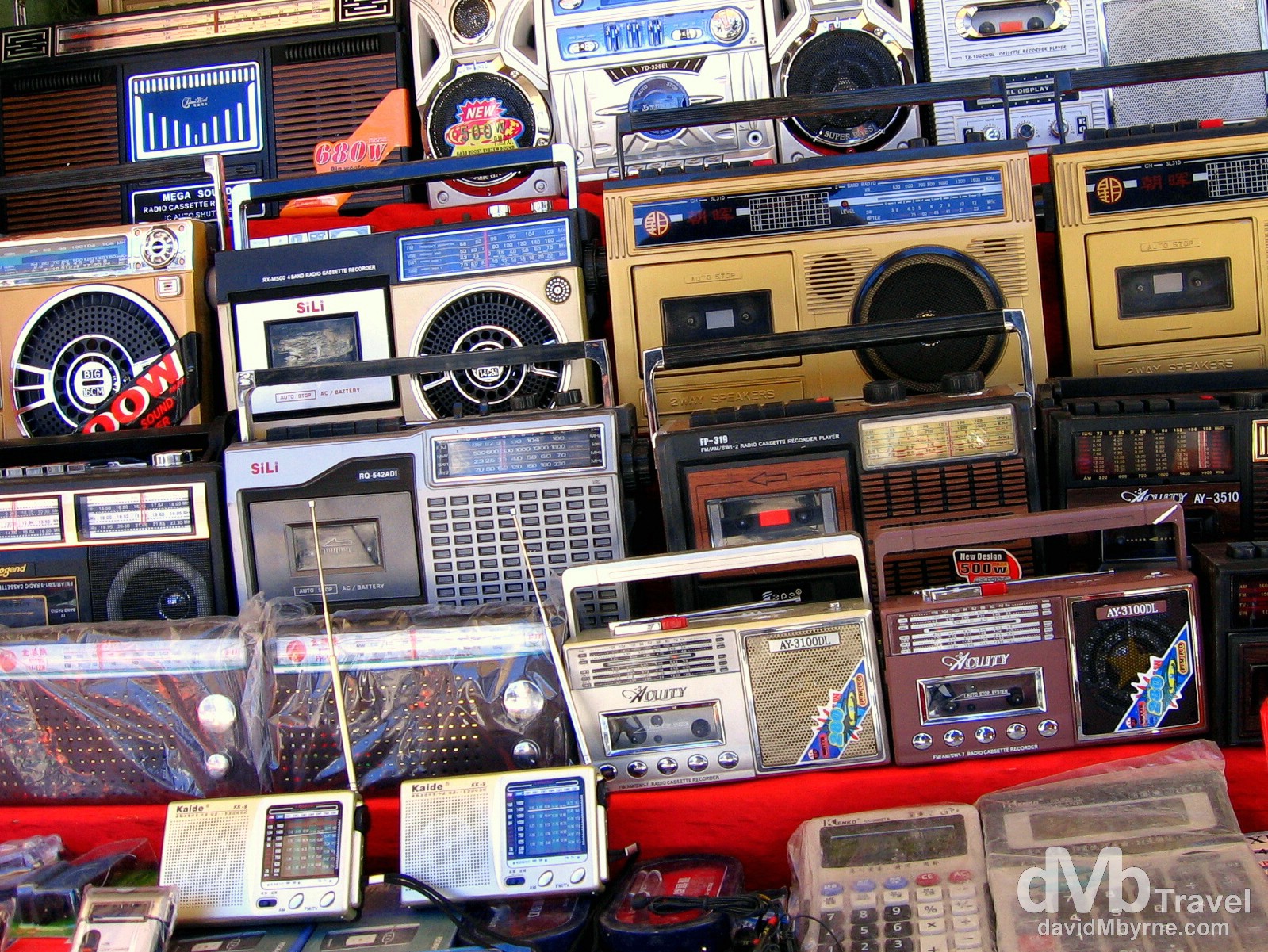 More From The Friendship Highway