An 800 km Scenic Route Traversing The Tibetan Plateau, a.k.a. The Roof of the World

The Friendship Highway, also known as the China-Nepal Highway, is an 800-kilometre (500-mile) scenic route connecting Lhasa, the capital of Tibet, the autonomous region of the People’s Republic of China, with the Chinese/Nepalese border at the Sino-Nepal Friendship Bridge between Zhangmu, Tibet and Kodari, Nepal. The only international highway in Tibet, the route is the westernmost part of the 5,470 kilometre (3,400 mile) China National Highway 318 connecting Shanghai to Zhangmu. Renowned for its scenic beauty, the route crosses the Tibetan Plateau, a.k.a. The Roof of the World, the world’s largest & highest (average elevation of 4,500 metres) plateau, traversing three 5,000 metre+ passes in the process, before dropping to 1,750 metres at the Friendship Bridge, some 120 kilometres (75 miles) shy of Kathmandu, the Nepalese capital.

Day 1 Highs || Scenery & warming up in Gyantse with green tea

Day 1 Low || Getting frisked by monks

From Lhasa, the Friendship Highway follows the Kyi Chu river for about 60 kilometres up to the confluence with the Yarlung Tsangpo River (Brahmaputra) at Chushul. The main route continues along the Yarlung valley up to Shigatse, Tibet’s second-largest city and formerly the home of the Panchen Lamas. A subsidiary branch crosses the Yarlung Tsangpo at Chushul and crosses the 4,800-metre high Gampa La, passes along turquoise Yamdrok Yutso lake before crossing the 5,045-metre high Karo La at the foot of Noijin Kangsang, and following downstream the Nyang Chu valley through Gyantse up to Shigatse.

The Freeze, Part I

“Where’s the heater?” I asked the nice, obliging lady showing me around a few of the cheaper rooms in the Jianzang Hotel, the hotel my guidebook claims is the best one in town.

“No heating,” was the reply I dreaded to hear but kind of expected. Shiver.

Pat, having sent me in to scope out the rooms, was sitting out in the jeep, nice and warm. It was the same jeep that had taken 6 hours to get us here to Gyantse from Lhasa, on this, the first day of our 5-day Friendship Highway trip to Nepal.

“We’re in for a long night, Lad”, I told him. After explaining the grim reality of the situation we both agreed we’d probably make it through the night if we wore most of what we had in our bag, most of our not-suited-for-Tibet-in-late-February clothes. So that’s what we’re doing. As I type it’s 9:20 p.m. on days 1 and I’m in bed under two duvets with my socks, pants, t-shirt and fleece on trying to keep my fingers warm enough to get through this entry. It’s not easy so I hope you appreciate the effort.

Day 1 Recap
If I was to quickly recap today I would say we left Lhasa later than planned at 11.a.m (delays), drove up, and up, and up, and up, eventually reaching the the Kamba-la pass on the top of some mountain from where we were accosted by Yak-leading locals for pictures as we tried to take in the view of Yamdrok-tso lake some distance (300 metres actually) below us. Views were sublime. 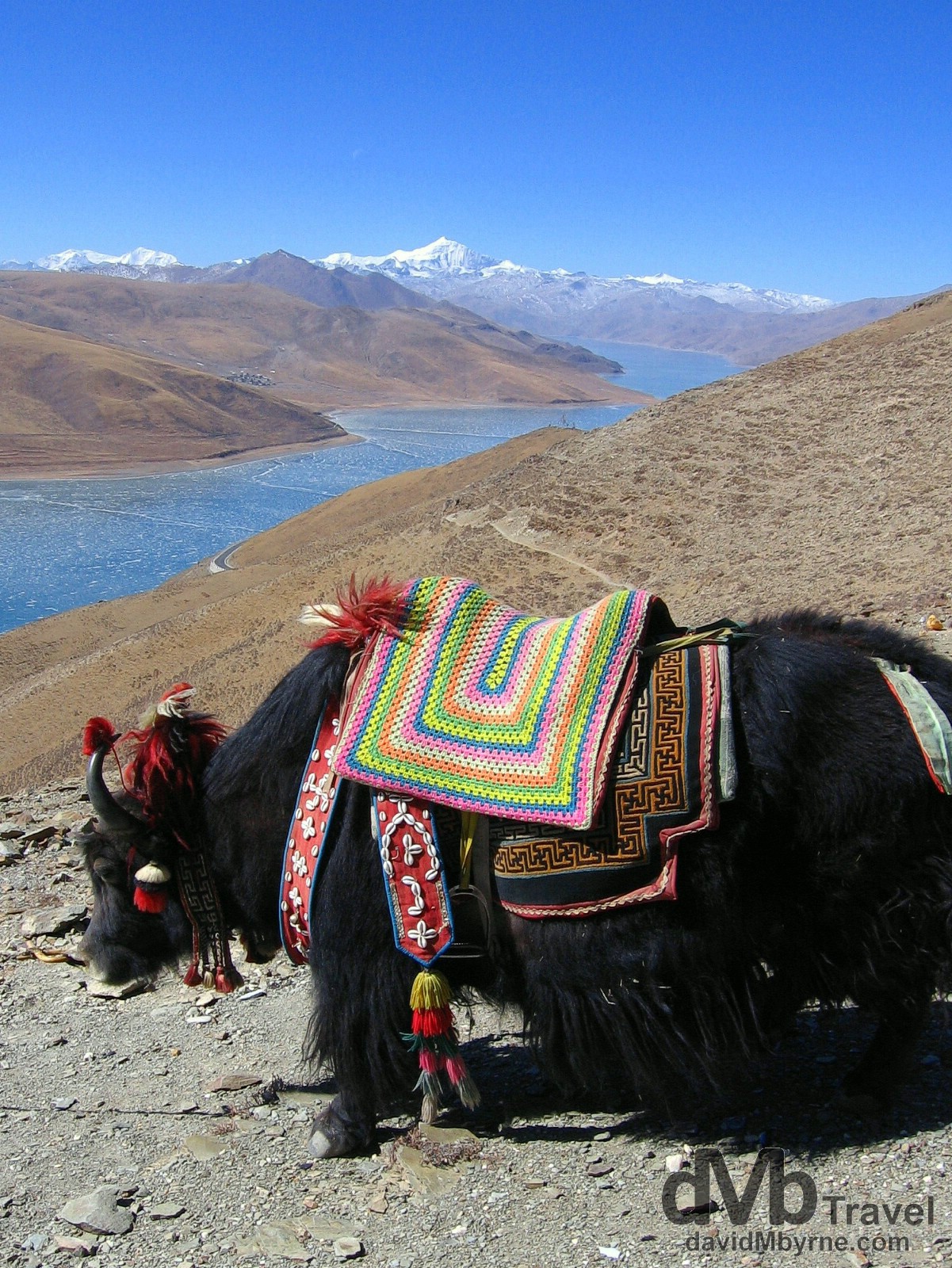 Day 1 || 12:17 || A yak on the Kamba-la pass (4,794 m / 15,800 ft) of the Friendship Highway overlooking a frozen Yamdrok-tso lake. The peak in the distance is Mt. Nojin-Kangtsang (7,191 m / 23,730 ft). That is according to my guidebook – our driver isn’t much good in this regard as he can’t speak a word of English. This was our first real look at snow-capped peaks having driven from Lhasa through arid, dusty and rocky plains to get to the pass. And it was here I was accosted for RMB 5 by a local after being accused of taking a picture of her dog. Not guilty. On the Kamba-la Pass of the Friendship Highway, Tibet. February 29, 2008.

Yak Dependent
From the Kamba-la Pass we drove to a small Tibetan village where we found a restaurant (more like a local’s front room, one that provided quite the authentic Tibetan experience) for a lunch of rice, potatoes & steak. Yak steak of course. And with the room heated by a central stove fuelled by dried yak dung it really hit home how important the long haired beasts are to the Tibetans. After lunch it was back on the road for a two-hour drive to our present location of Gyantse, passing through dry, arid and almost otherworldly environments with some amazing scenery as we went. 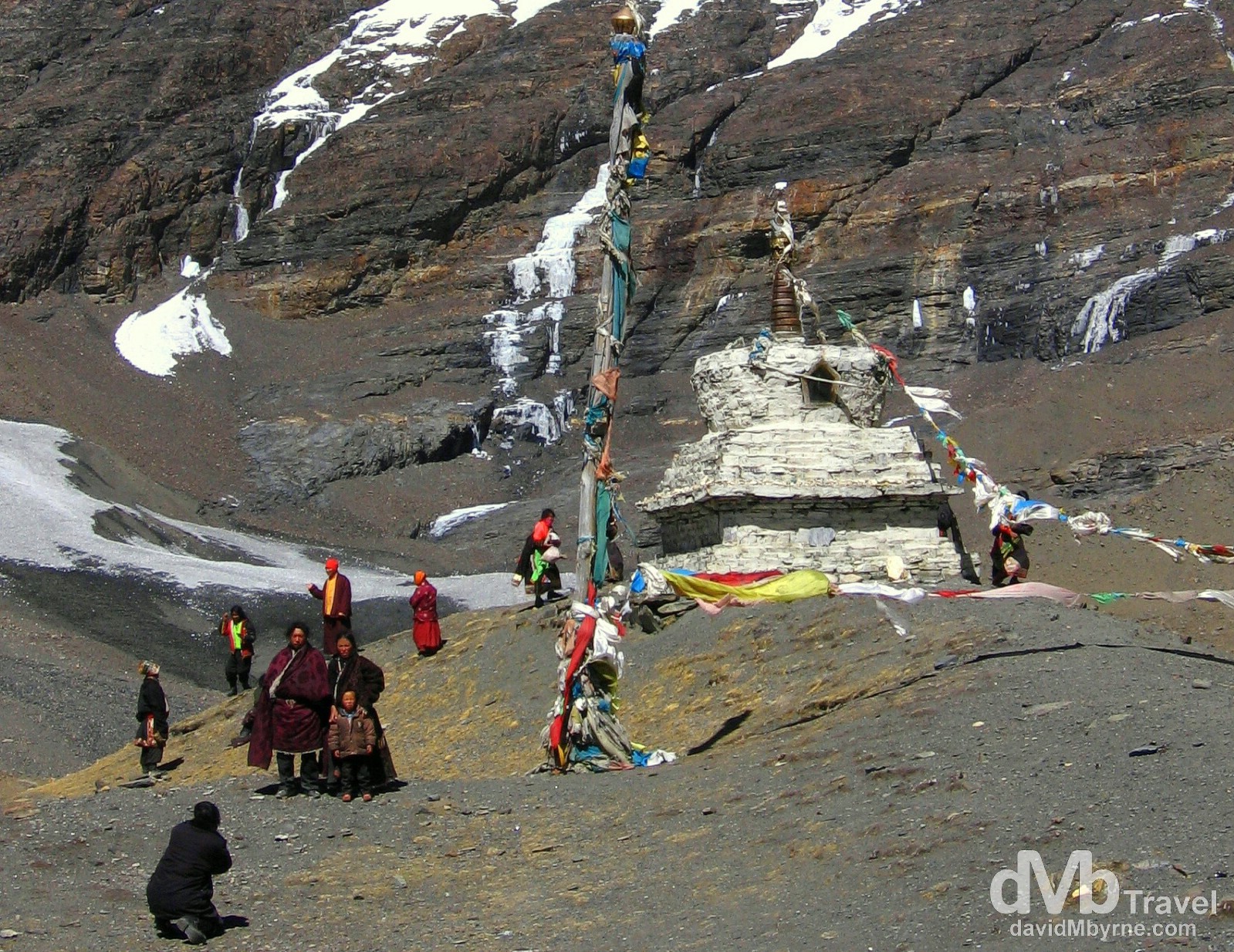 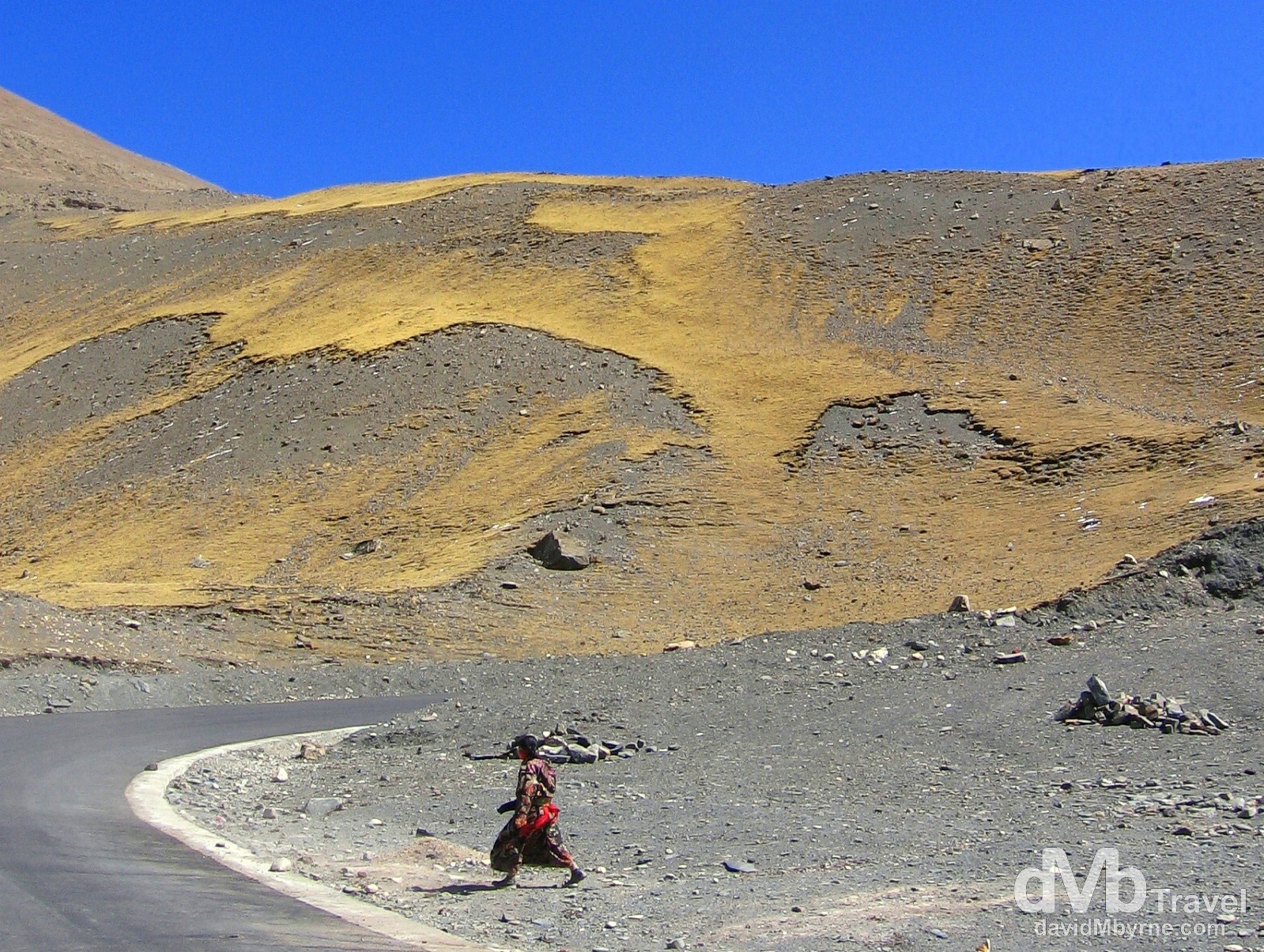 Gyantse
When we arrived in Gyantse, Tibet’s fourth largest town, we visited the Pelkhor Chode Monastery where the monks were a little overly concerned about us taking pictures inside the monastery temple, going so far as to frisk us for hidden cameras at the entrance (assuming we let them of course, which we didn’t). We took offense to their stance, especially after paying €4 into the monastery complex minutes earlier, and the whole episode left a bad taste in our mouths. By that stage we weren’t that keen to see the inside of yet another temple anyway so we sat outside in the sun instead commenting on how many rabid-looking stray dogs there were in the grounds of the monastery sunning themselves just like us. It certainly is a dogs life, here in Gyantse at least. 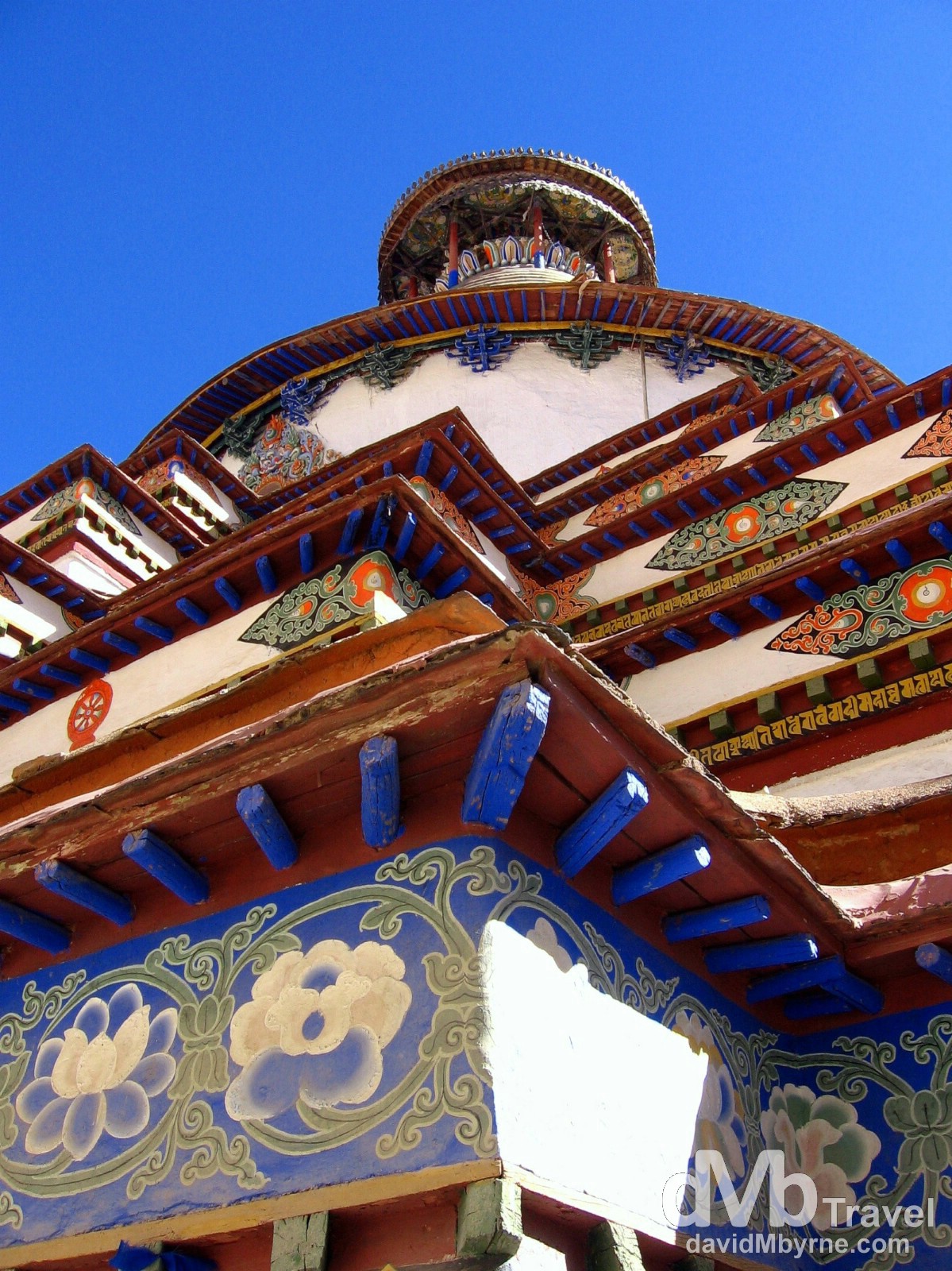 Day 1 || 16:54 || At least pictures were allowed of the outside of the Pelkhor Chode Monastery. Gyantse (

Tomorrow || Day 2
Tomorrow, Day 2, is a handy day. We’ll take another look around Gyantse – I’ll be honest, as of now it doesn’t seem to offer much but I’ll reserve judgement proper until tomorrow. We’ll then be back on the road again en route Shigatse, Tibet’s second largest town. Shigatse is only an hour away, an hour nearer EBC (Everest base camp). One thing I know we’ll be doing when we get to Shigatse is splashing out (€10+) and looking for a hotel with heating, knowing it’s unlikely we’ll get it at EBC. Not that that bothers us; for some reason staying in a hotel / guesthouse at EBC without heating seems tolerable.

The Freeze, part II
We’re just trying to settle in for the night and Pat, who looks every bit the burglar he isn’t with his black beanie on, has just piped up from under his two duvets.

“Here Dave, how much was the room with heating?”

“Ummm, and how much was this room?”

“So by saving RMB 110 (€11), RMB 55 each, we’ll probably freeze to death in some hole of a town in southern Tibet. What would our families think of that?”

“I dunno lad, I never considered that. But c’mon. It’s not that bad. Think good thoughts. Sweet dreams.”

More From The Friendship Highway