I like cities. I always have. Big, small, relaxed, busy, hot, cold, clean, dirty. It doesn’t matter; there is something about them that appeal to me. I’ve always liked Sydney, the capital of the Australian state of New South Wales & one of the world’s great urban centres. This is my second visit here and first since 2003. Not much seems to have changed in those (almost) 10 years. There’s lot to do & see here; one could stay busy for a long, long time, if that’s your thing. But it’s also a great place to just do nothing and coming off a 6-week road trip around New Zealand that’s exactly what I did for the past week. Nothing, except take a few pictures. It was great. I loved every minute of it. 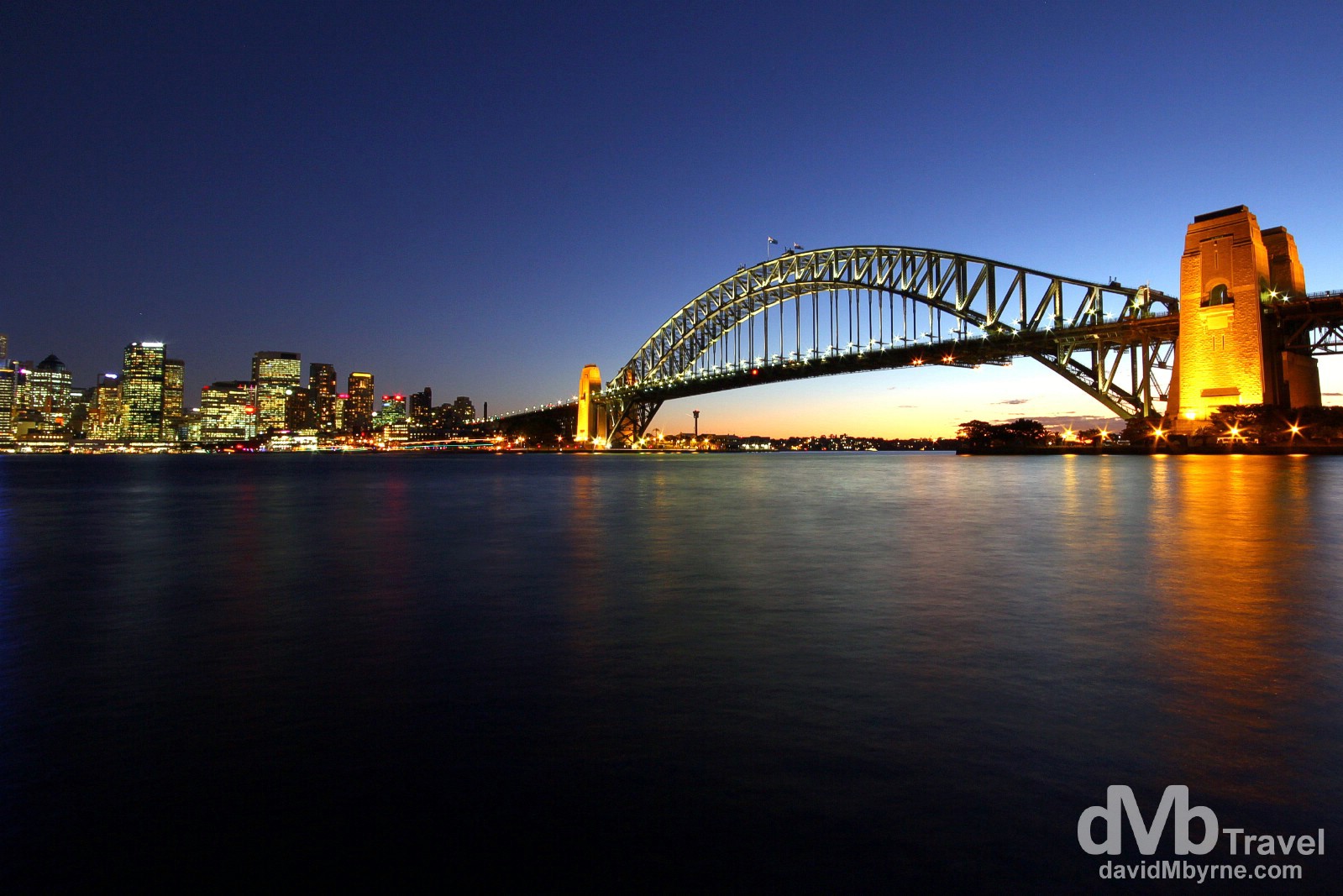 The Sydney Harbour Bridge & CBD skyline at dusk as seen from the Kirribilli district of the city. Sydney (

Sydney is rather like an arrogant lover. When it rains it can deny you its love and you can find it hard to relate to. It’s not a place that’s built to be rainy or cold. But when the sun comes out, it bats its eyelids, it’s glamorous, beautiful, attractive, smart, and it’s very hard to get away from its magnetic pull.

Sydney for a photographer is a treat. What’s not to like? That natural harbour, rivalled on the world stage maybe only by Rio De Janeiro, needs no introduction; it & its iconic bridge & Opera House are as photogenic as they are famous, especially when the weather plays ball. I walked across the iconic Harbour Bridge one afternoon and sat by the northern shore of the harbour in the Kirribilli district of the city for a few hours watching the sun setting & the city lights springing into life. It was a simple excursion but it was, and will always be, a travel highlight. It was there, not long after sunset, that I captured the above and below pictures, both 10 second exposures captured exactly 1 hour apart. 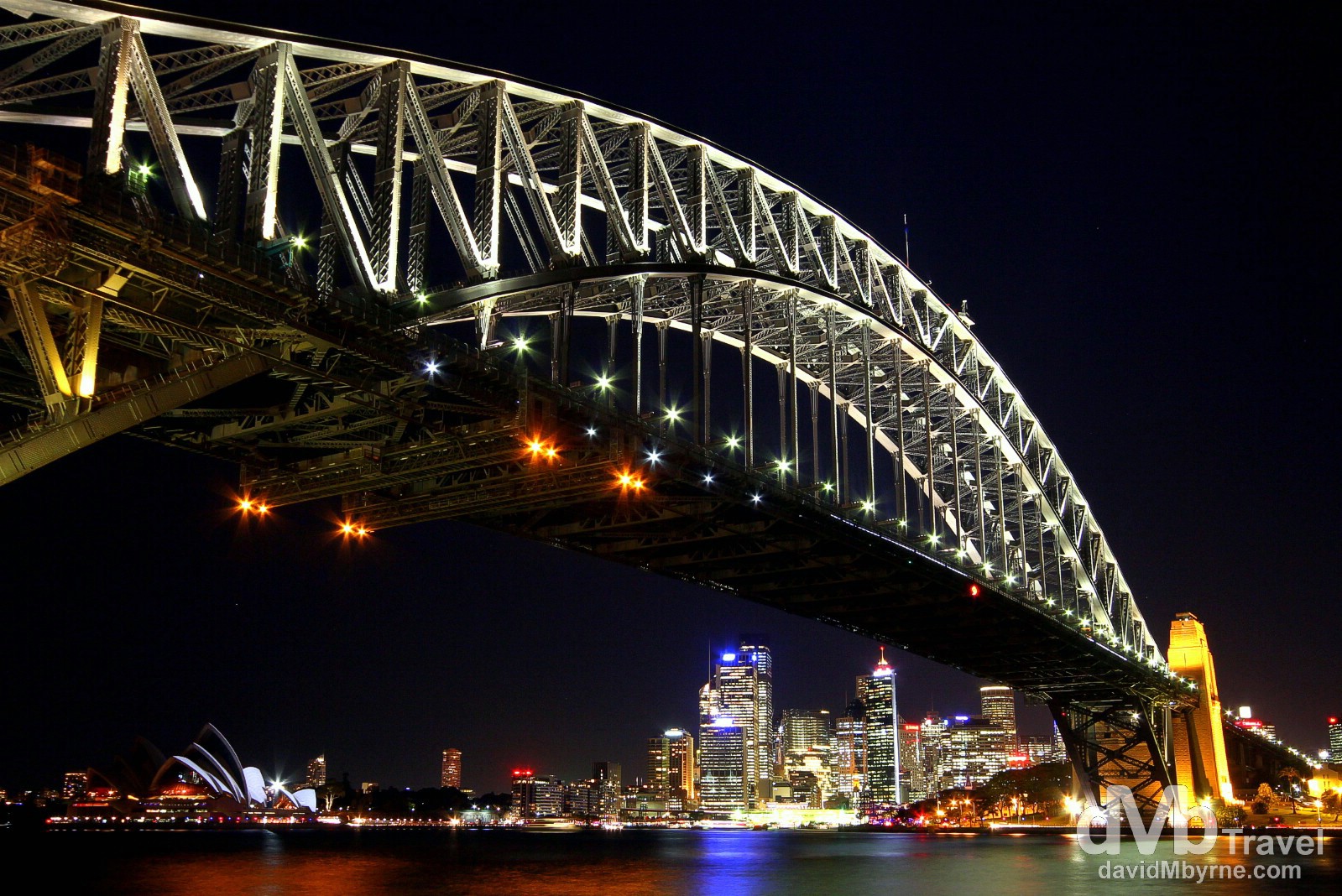 The Sydney CBD as seen at night from under the Harbour Bridge in the Kirribilli district of the city. June 7, 2012.

The Opera House is a splendid edifice, and I wish to take nothing away from it, but my heart belongs to the Harbour Bridge. It’s not as festive, but it is far more dominant – you can see it from every corner of the city, creeping into frame from the oddest angles, like an uncle who wants to get into every snapshot. From a distance it has a kind of gallant restraint, majestic but not assertive, but up close it is all might. It soars above you, so high that you could pass a ten-storey building beneath it, and looks like the heaviest thing on earth. Everything that is in it – the stone blocks in its four towers, the latticework of girders, the metal plates, the six-million rivets (with heads like halved apples) – is the biggest of its type you have ever seen. This is a bridge built by people who have had an Industrial Revolution, people with mountains of coal and ovens in which you could melt down a battleship. The arch alone weighs 30,000 tons. This is a great bridge. 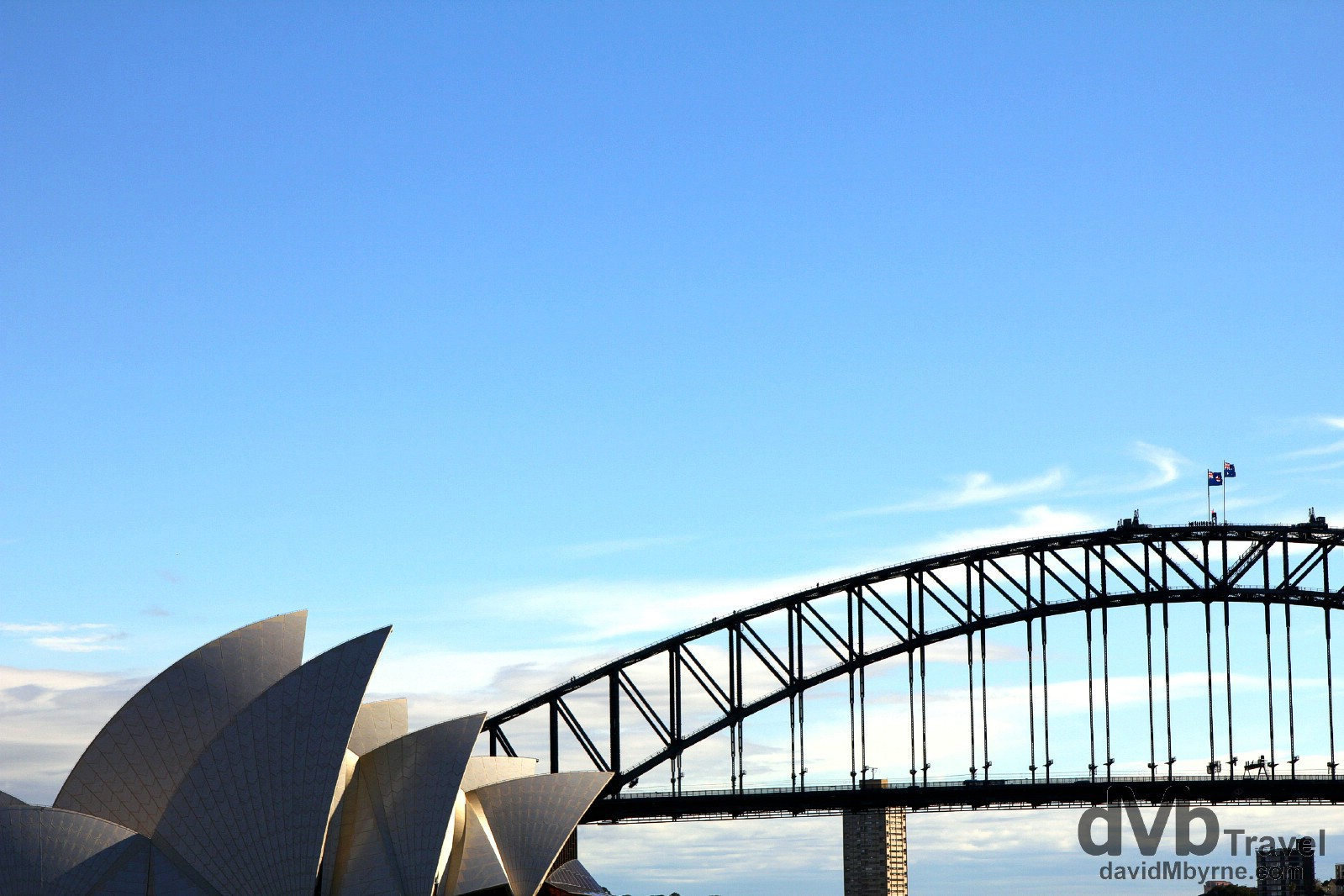 The sails of Sydney Opera House & a section of the span of Sydney Harbour Bridge as seen from Mrs Macquaries Point across Farm Cove in Sydney, New South Wales, Australia. June 5, 2012

This is a picture I captured, on my first full day in the city, of a worker abseiling the distinctive sails of the Opera House roof. I think he was cleaning the roof tiles although he didn’t, if you’ll pardon the terrible pun, seem to hang around very long. 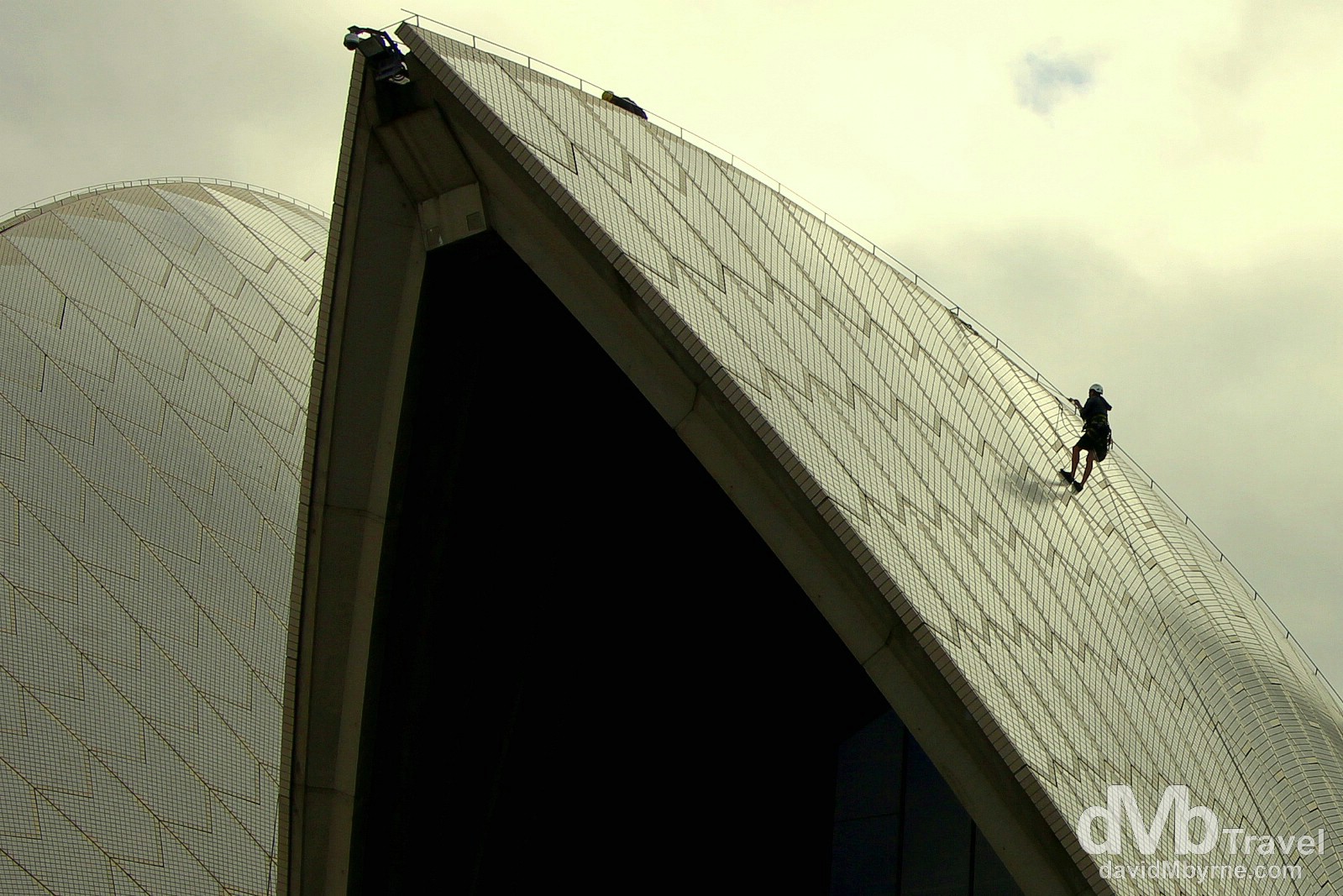 A worker abseiling on the sails of the Opera House in Sydney, Australia. June 5, 2012.

Sydney’s Opera House, a multi-venue performing arts centre, is a UNESCO listed World Heritage Site & easily one of the 20th century’s most distinctive buildings. It was conceived and largely built by Danish architect Jørn Utzon, opening in 1973 after a long gestation that had begun with his competition-winning design in 1957. Utzon received the Pritzker Prize, architecture’s highest honour, in 2003. The Pritzker Prize citation stated:

There is no doubt that the Sydney Opera House is his masterpiece. It is one of the great iconic buildings of the 20th century, an image of great beauty that has become known throughout the world – a symbol for not only a city, but a whole country and continent. 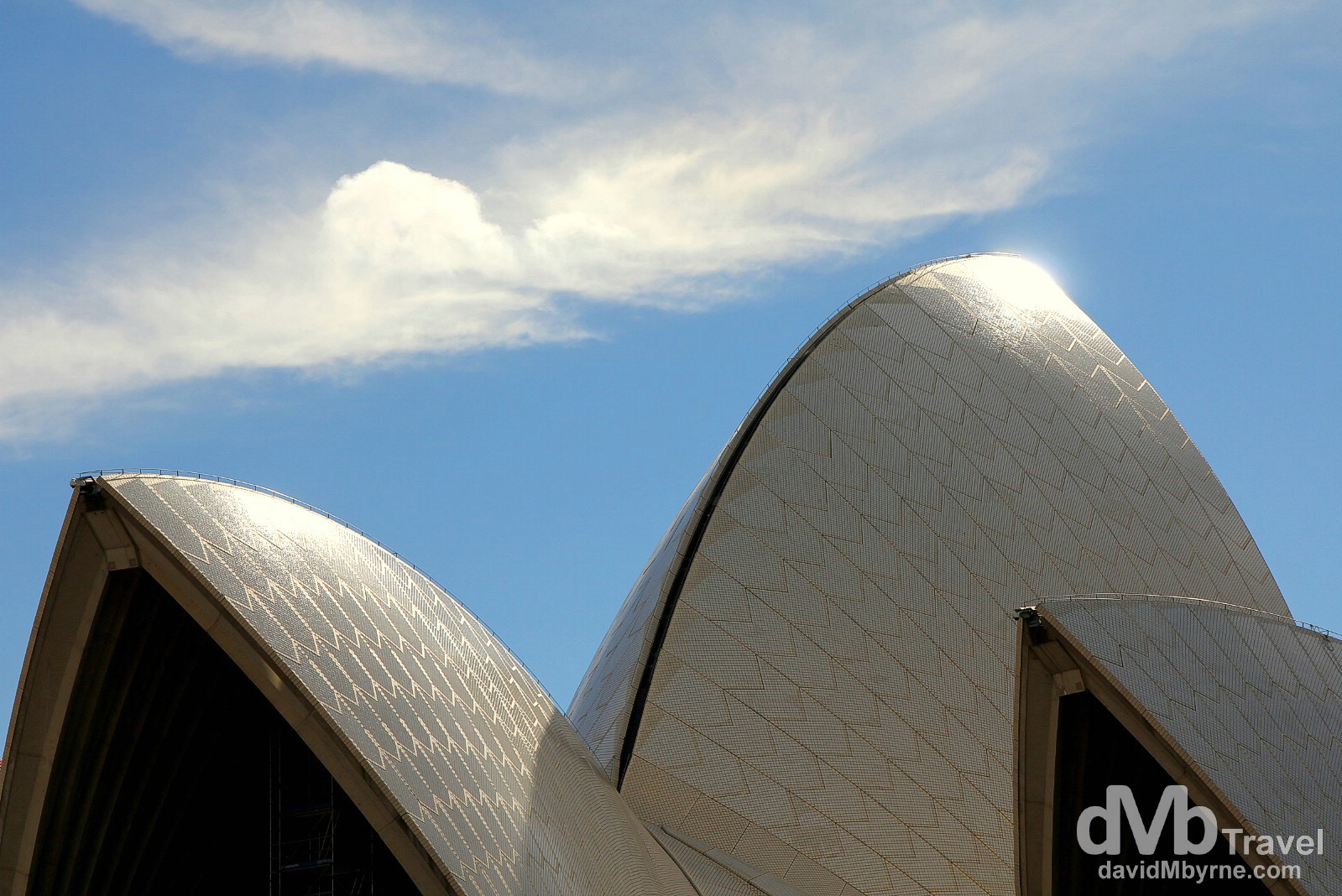 The roof of the Opera House shortly after capturing the above image. The skies cleared quickly. It was that kind of day. Sydney, Australia. June 5, 2012. 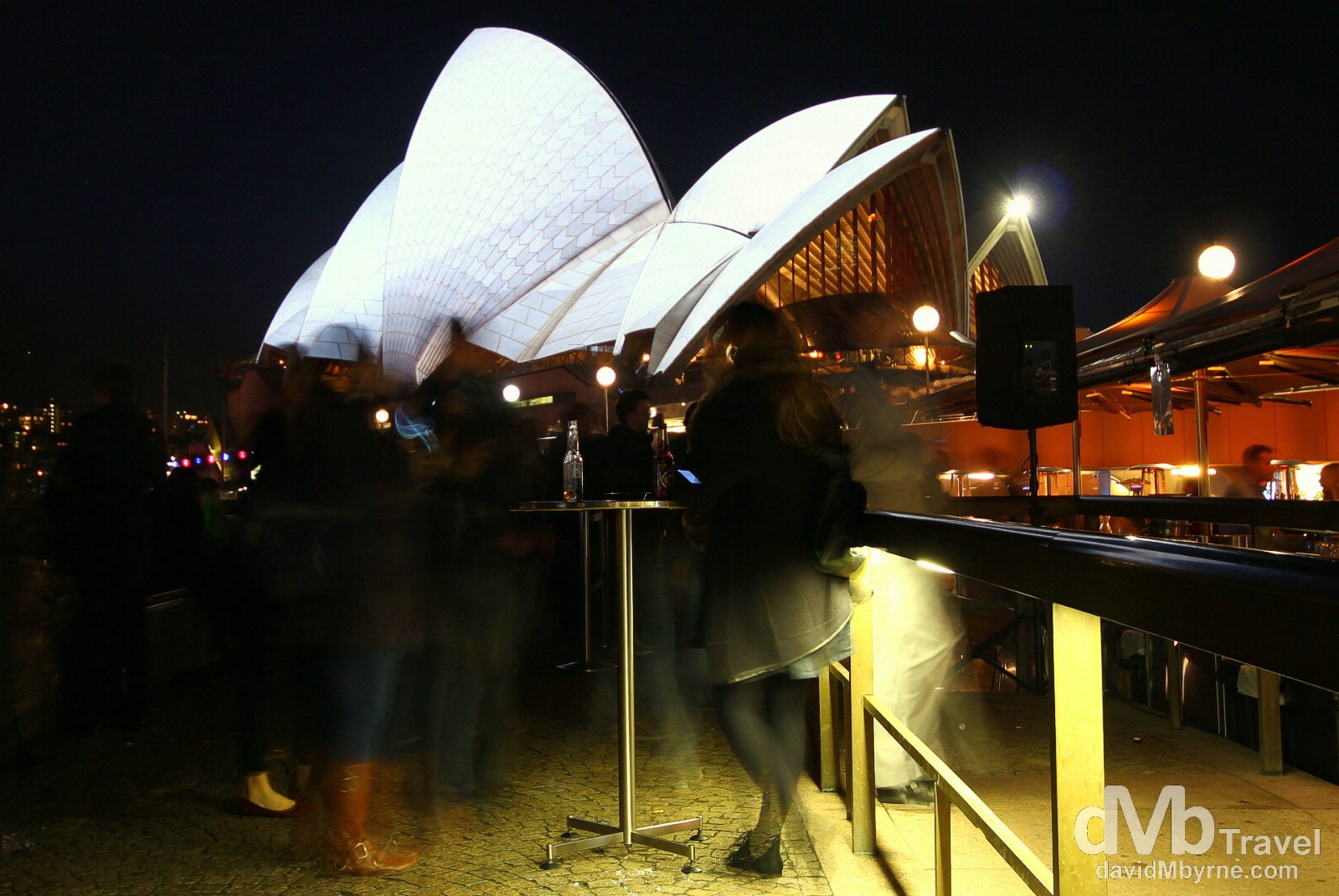 Timing. My trip to Sydney coincided with Vivid Sydney, billed as an after dark festival of ‘Light, Music & Ideas’. Various waterfront areas, structures & buildings were illuminated by immersive light installations and projections, all of which provided its fair share of photo opportunities. It brought the crowds out as I attempted to capture in the above picture of revellers on Opera Quays with the sails of the Opera House in the background.

Harbour Bridge, a.k.a. The Coathanger 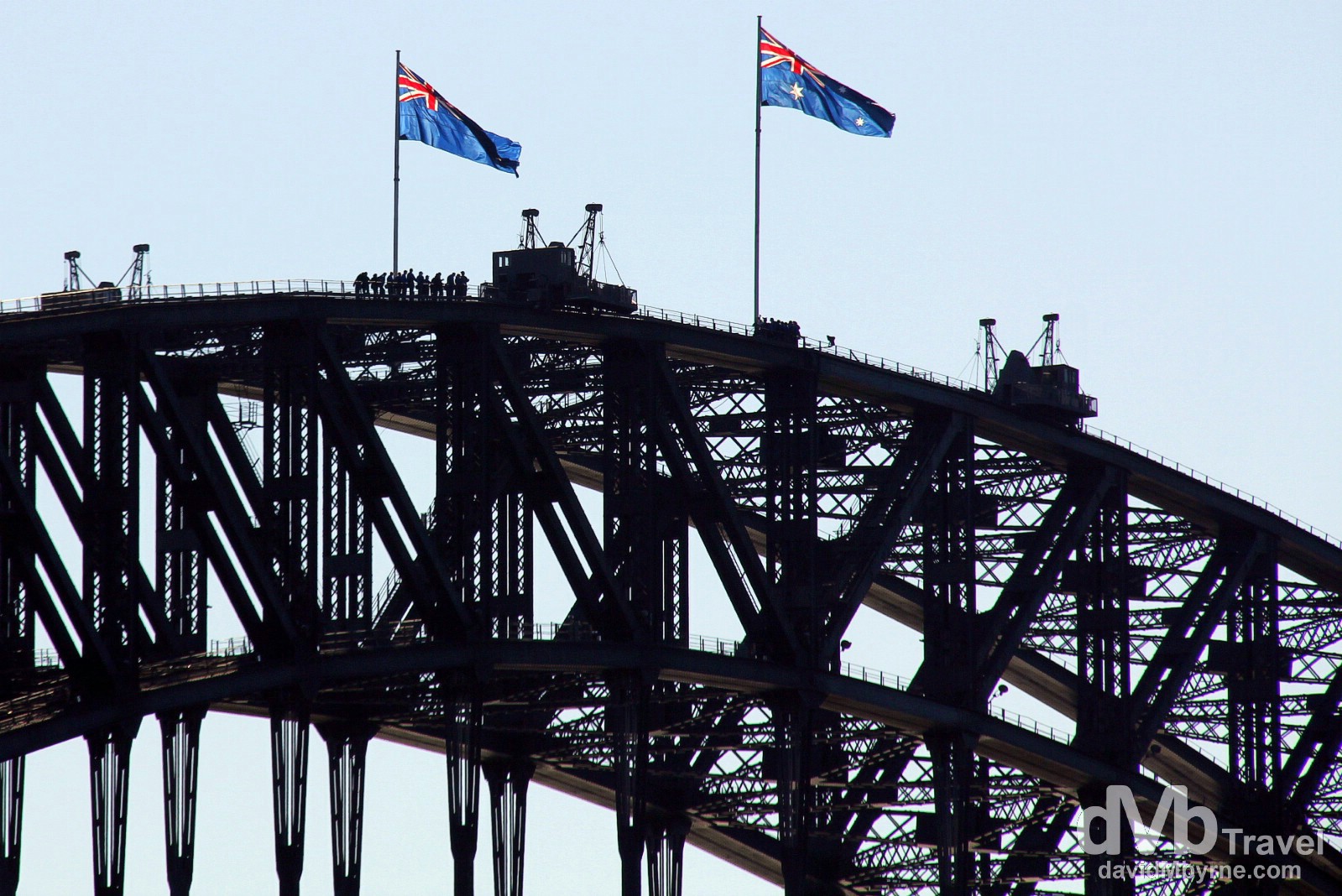 BridgeClimb climbers atop the Sydney Harbour Bridge as seen from the Manly Ferry in Sydney Cove, Sydney, Australia. June 8, 2012.

The bridge is a steel through arch bridge that carries rail, vehicular, bicycle and pedestrian traffic between the CBD and the North Shore. Nicknamed “The Coathanger” because of its arch-based design, the bridge, which opened in 1932, was designed and built during The Great Depression of the 1930s by British firm Dorman Long and Co. Ltd. of Middlesbrough. According to the Guinness World Records, it is the world’s widest long-span bridge. A few other accolades? Ok, well it is the fifth longest spanning-arch bridge in the world & the tallest steel arch bridge in the world, measuring 134 metres (440 ft) from top to water level. Until 1967 the Harbour Bridge was Sydney’s tallest structure so needless to say the views from it’s peak are spectacular – I did the BridgeClimb when I was last in the city in 2003 & didn’t feel the need to do it again. 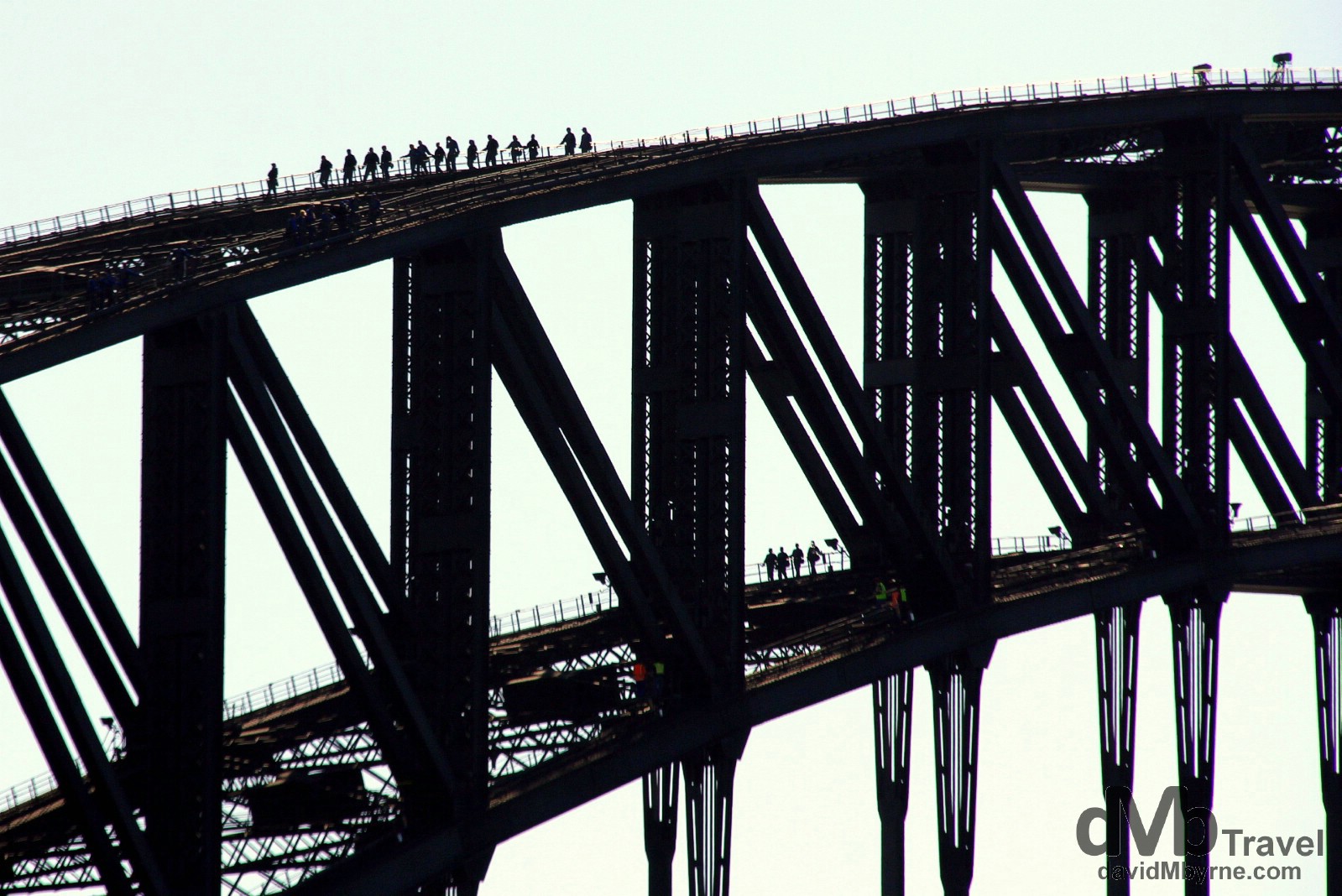 BridgeClimb climbers on the Sydney Harbour Bridge as seen from the Manly Ferry in Sydney Cove, Sydney, Australia. June 8, 2012.

I loved photographing the bridge and found it very photogenic. Of course I did. But it’s not to everyone’s liking.

To get on in Australia, you must make two observations. Say, “You have the most beautiful bridge in the world” and “They tell me you trounced England again in the cricket.” The first statement will be a lie. Sydney Bridge is big, utilitarian and the symbol of Australia, like the Statue of Liberty or the Eiffel Tower. But it is very ugly. No Australian will admit this.

Boasting over 100 beaches, including some of the most famous in the world, Sydney is almost unrivalled in the world for the number and quality of beaches available. Manly is just one of Sydney’s many beach suburbs. It is located in northern Sydney, about 17 kilometres north-east of Sydney Cove near the CBD. 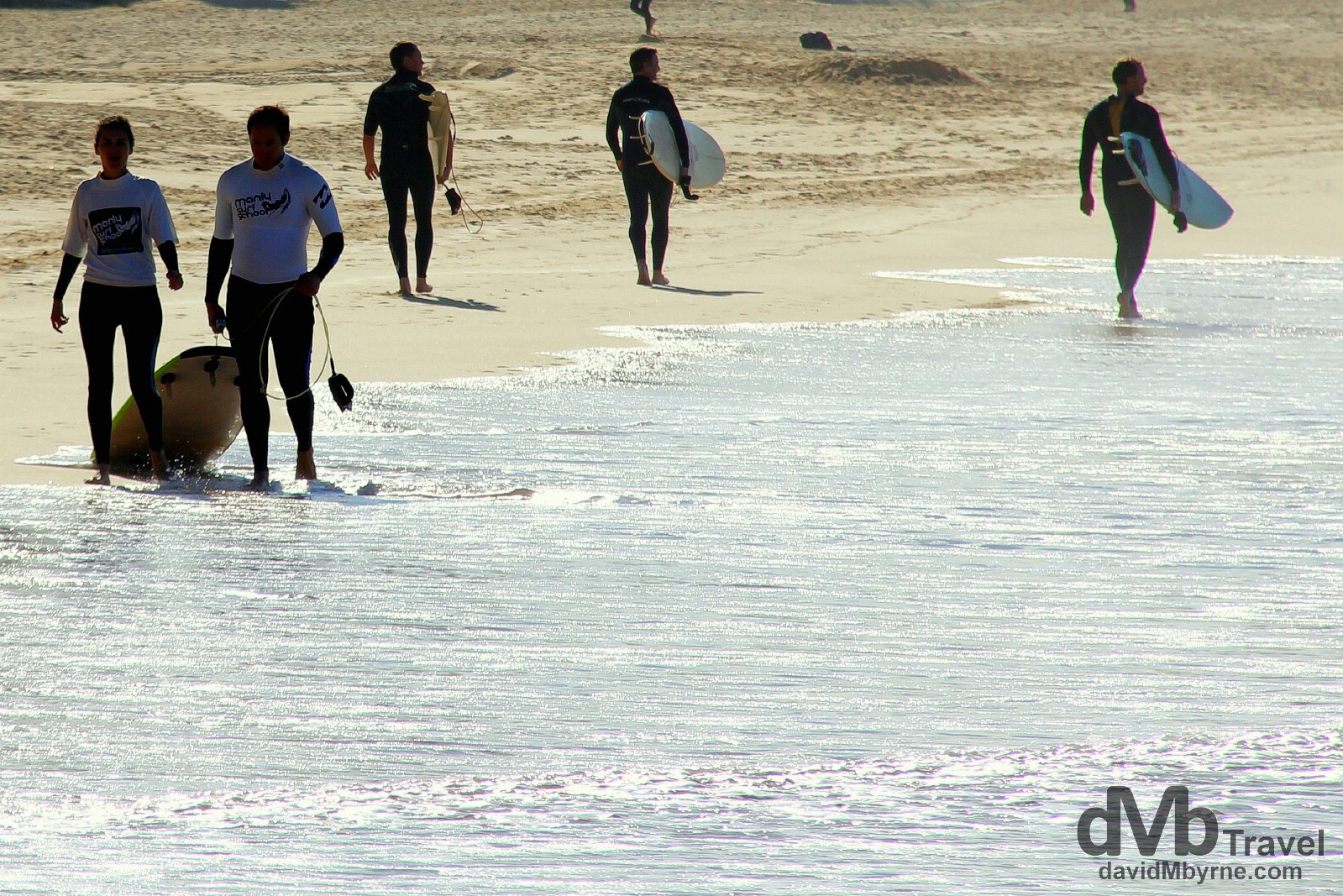 Manly is a popular tourist destination featuring a long stretch of sand. But, & no offence to Manly residents, as a tourist it’s the trip here from Sydney Cove on the Manly Ferry that is the real highlight of a visit – the ferry offers amazing views, and thus photo opportunities, of the harbour & its iconic sights. Manly Beach, Sydney, Australia. June 8, 2012.

Sydney in general is eclectic. You can be on that brilliant blue ocean walk in the morning and then within 20 minutes you can be in a completely vast suburban sprawl or an Italian or Asian suburb, and it’s that mix of people, it’s that melting pot of people that give it its vital personality.

Back To Asia
Tomorrow I return to Asia. I’ve spent the last 73 days Australasia but tomorrow I’ll be on a flight to the Indonesian island of Bali. I’ll miss Sydney. Twice I’ve visited now but regardless, it’ll be staying, & will always be high up, on my bucket list.