”Conscious of the past, efforts were made at the time to rebuild the town so as to reflect its ancient pre-eminence, but the town planners fell someway short. In their defence, they did not have a lot to work with; it’s obvious Ancient Sparta was more focused on building legendary armies as opposed to cities. Also, it’s hard for a structure to outlive antiquity if it was never constructed in the first place.”

It is safe to say that the legend of Ancient Sparta, Greece’s once-dominant and inviolable city-state and military land-power, is more of a draw than the agreeable but unassuming present-day Greek settlement. 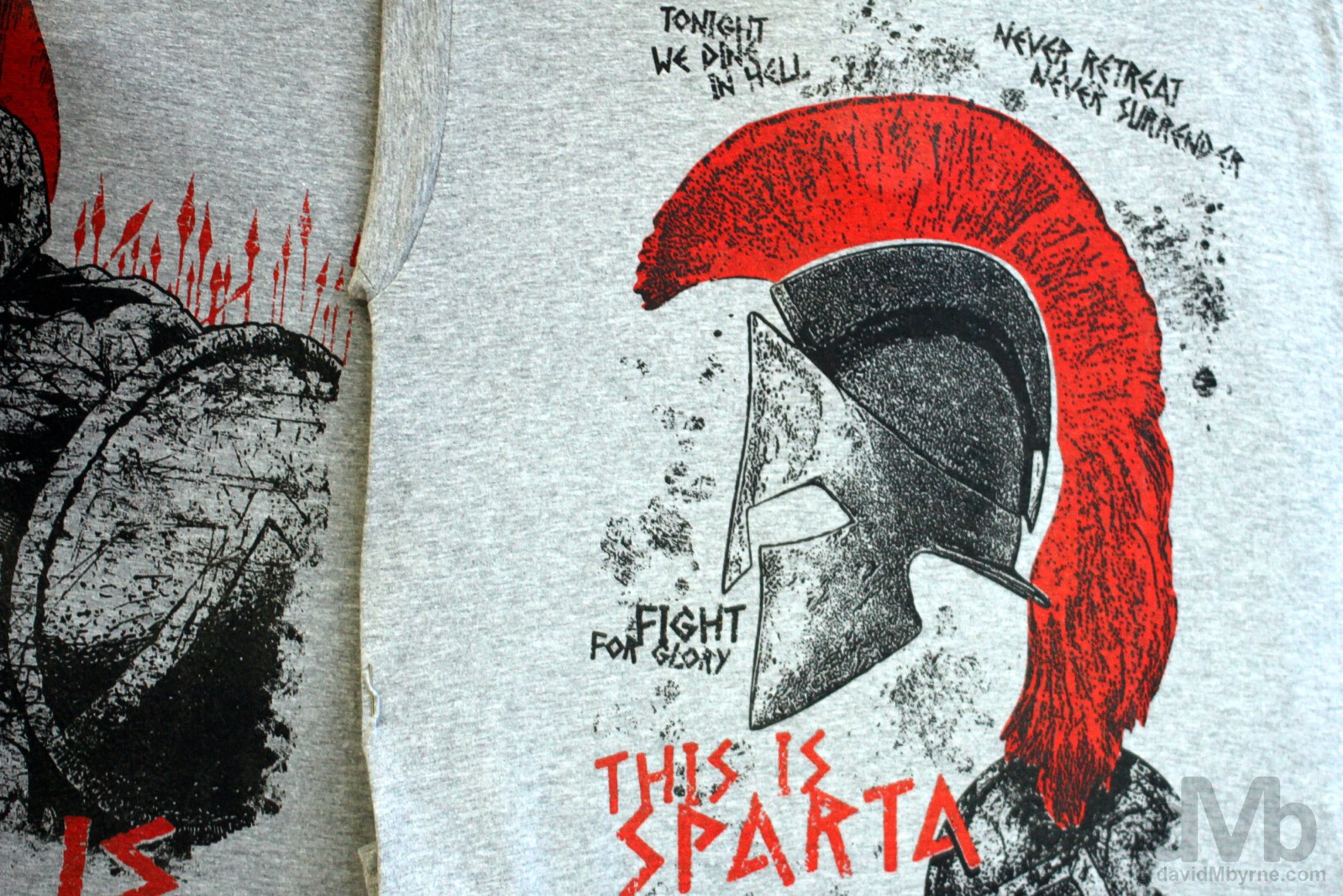 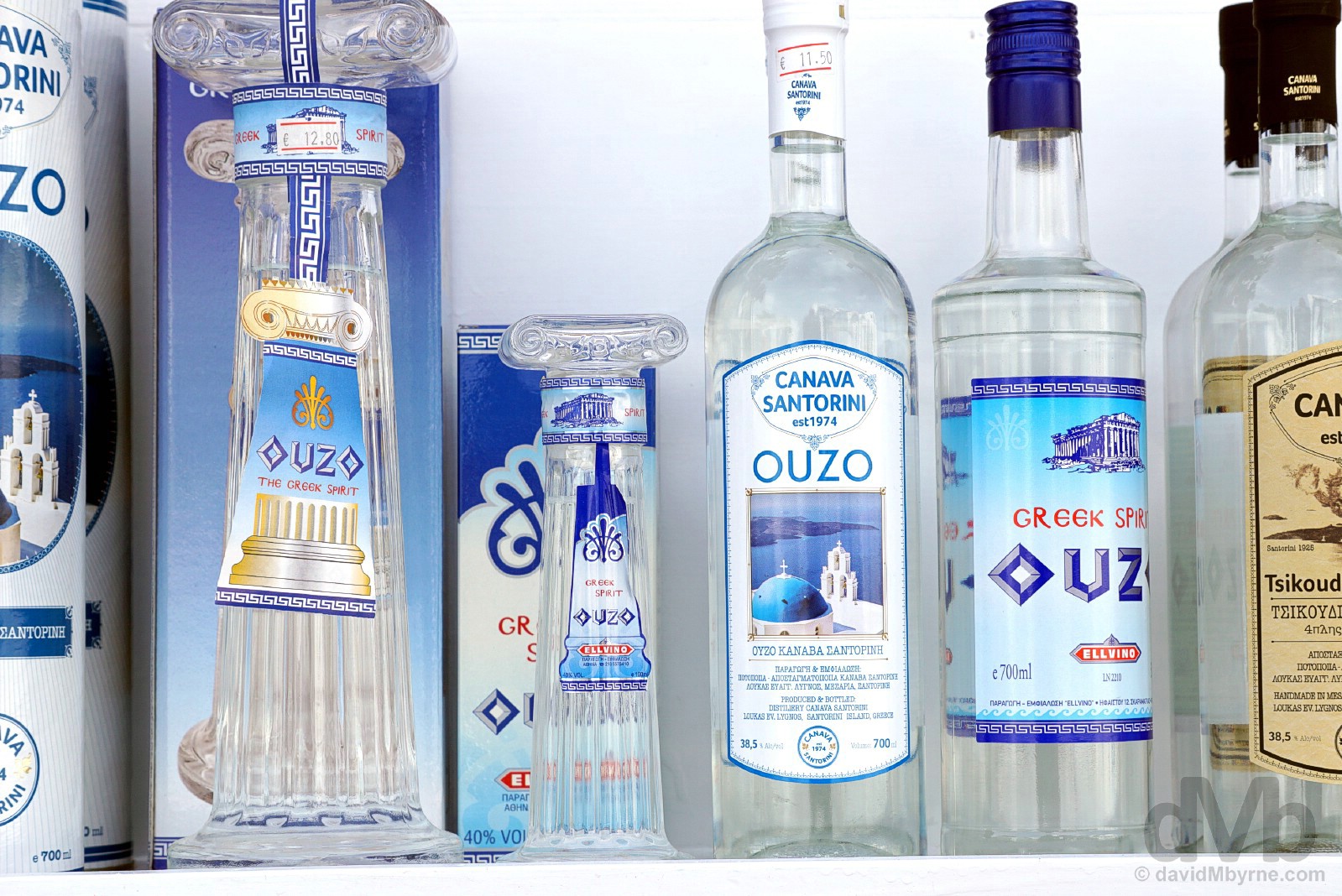 Sparta played a huge role in the development of ancient Greece from as early as the 6th century BC; its triumph over Athens and the rest of Greece in the Peloponnesian Wars of 431–404 BC marked the height of its powers. Famous for its military prowess and legendary warriors, Spartan soldiers were singled out in infancy and trained from an early age to be one of the most disciplined military forces ever assembled; tough, unafraid, and incorruptible, the feared army of the Spartans lived by the motto ‘return with your shield or on it’. 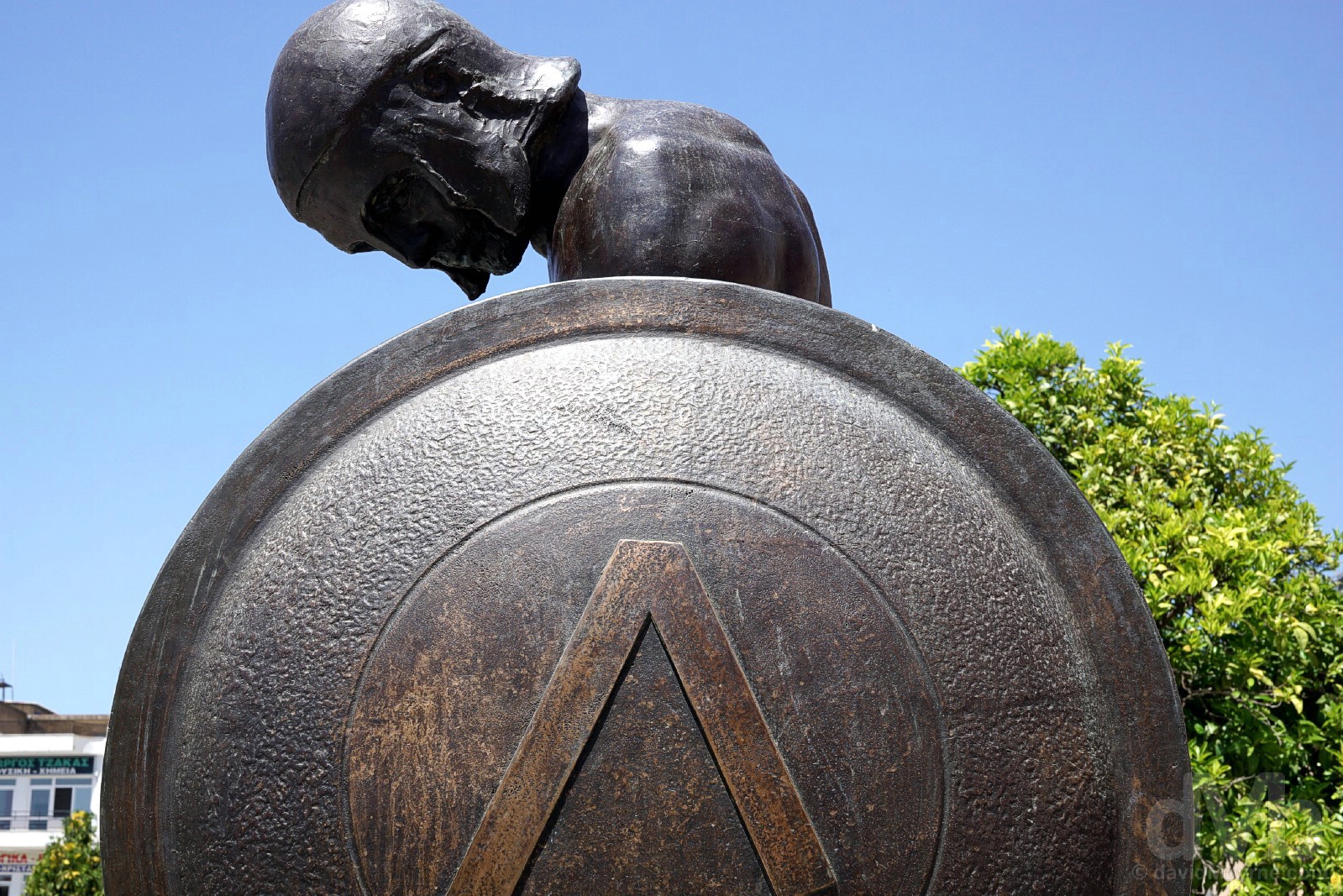 LAMBDA / LACEDAEMON | A Spartan soldier with his shield on display in present-day Sparta’s central plaza, Plateia Kentriki. The shield bears the letter lambda, the 11th letter of the Greek alphabet, the symbol the Spartan army used to denote Lacedaemon, as the feared city-state was known in antiquity. Sparta, Peloponnese, Greece. May 8, 2017.

This is Sparta
The stuff of legend, the warlike Spartan constitution and society, said to have been established in accordance with the Oracle of Apollo at Delphi by the quasi-legendary lawgiver Lycurgus (c. 820 BC), was strictly military-focused – all social institutions were focused on military training and physical development, while all males deemed strong entered the agoge system from the age of seven, intense and rigorous military training designed to encourage discipline, physical toughness, cunning, and undying loyalty to their fellow warrior and the Spartan state. 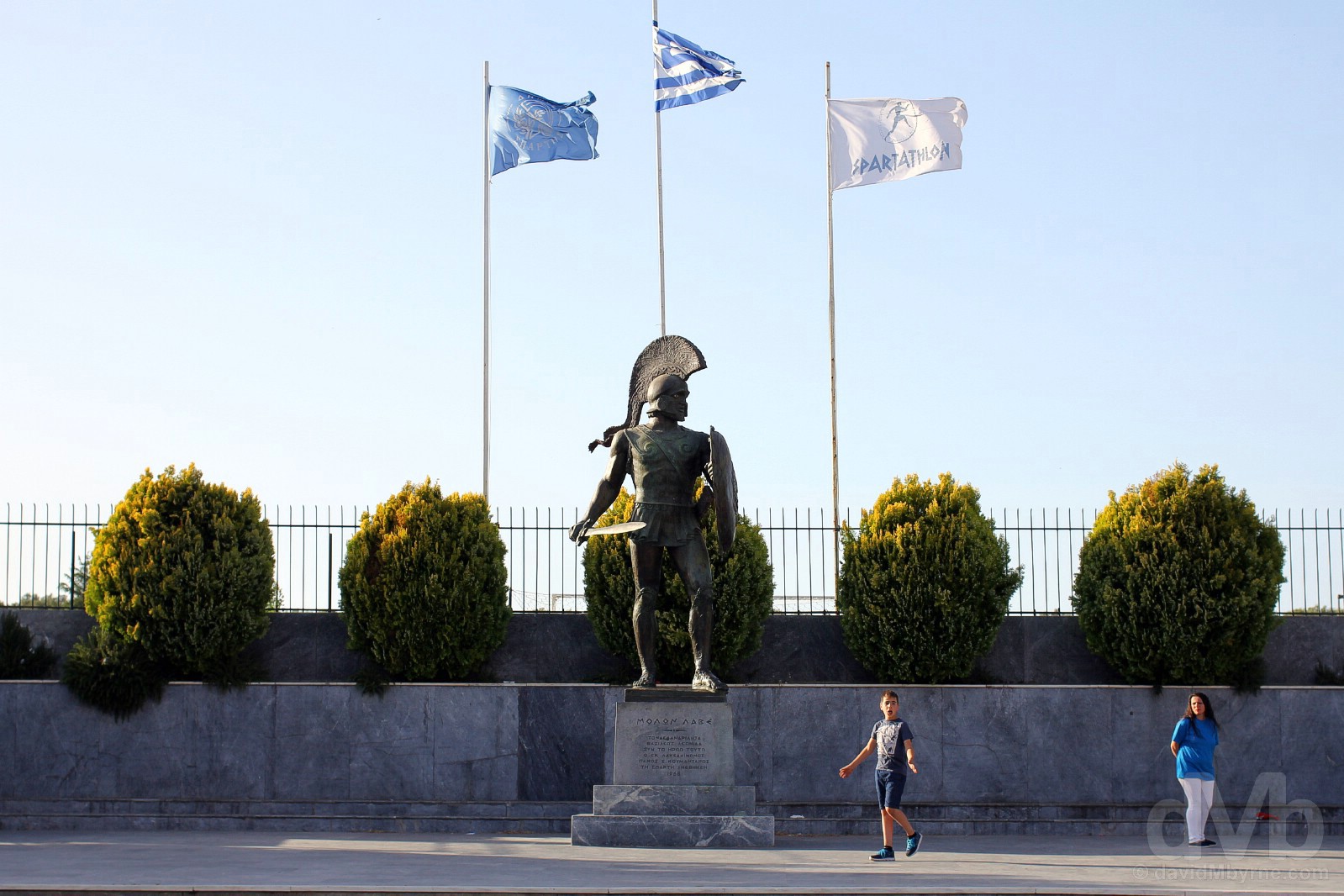 The warrior King Leonidas I (c. 540 – 480 BC) attained martyrdom by leading an coalition of Greek forces, including some 300 Spartans, to a last stand against a vastly superior numerical force of Persians at the Battle of Thermopylae, an event recounted in the 1962 epic The 300 Spartans, 2007s 300 and 2014s 300: Rise of an Empire. Despite the odds the Spartans, and not surprisingly, refused to flee or surrender. Sparta’s King Leonidas Statue, portraying a defiant and proud king, was erected in 1968 and bears the inscription ‘Molon labe’ (‘Come and get them’), seemingly the king’s response to the attacking Persian army’s demand for the outnumbered Spartans to lay down their weapons and surrender.

Ancient Sparta Decline & Modern Sparta
Ancient Sparta, a natural fortress in the Evrotas River valley and overlooked by the Taygetus mountain ridge, was never walled, but nor was it ever sacked (even with Ancient Sparta’s best days behind it Macedon’s Philip II and his son Alexandar The Great chose to give it respect from afar). Ancient Sparta went into a long decline that it would not recover from following a decisive defeat at the Battle of Leuctra in 371 BC. It experienced something of a renaissance under the Romans, but from the third century AD the nearby mountain hideaway fortress of Mystra became the focus of Byzantine interest. Sparta was eventually abandoned altogether for Mystras in the 12th century. Eventually Mystras too declined and was abandoned and in the 1830s the modern-day town of Sparta was built, on the very site of the ancient city-state, to once again assume the role of the capital of the Laconia region, the organisational centre of the huge agricultural plain of the Evrotas River Valley, and a centre for the processing citrus and olives. 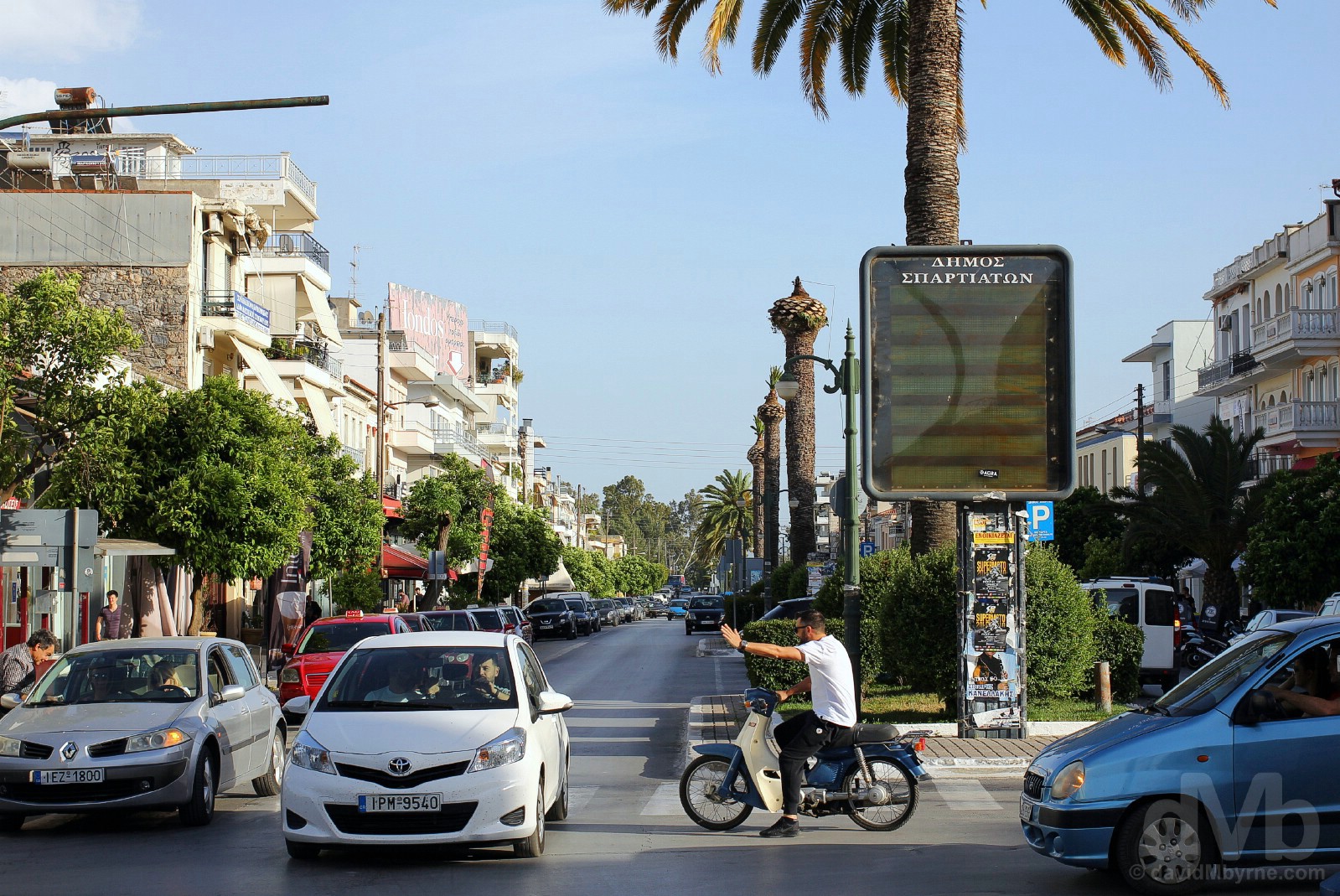 Suppose the city of Sparta to be deserted, and nothing left but the temples and the ground-plan, distant ages would be very unwilling to believe that the power of the Lacedaemonians was at all equal to their fame. Their city is not built continuously, and has no splendid temples or other edifices; it rather resembles a group of villages, like the ancient towns of Hellas, and would therefore make a poor show.

The 1880s design of modern-day Sparta was headed by Bavarian city planners who ensured the town would have large squares and wide tree-lined streets. Conscious of the past, efforts were made at the time to rebuild the town so as to reflect its ancient pre-eminence, but the town planners fell someway short. In their defence, they did not have a lot to work with; it’s obvious Ancient Sparta was more focused on building legendary armies as opposed to cities. Plus, it’s hard for a structure to outlive antiquity if it was never constructed in the first place.

It is men not walls that make a city.

– Lykurgos, architect of the warlike Spartan constitution and society, c. 820 BC

OLD ACROPOLIS THEATRE | Approching sunset at the ruins of the Theatre of the Old Acropolis of Ancient Sparta with the buildings of modern-day Sparta in the Evrotas River Valley overlooked by the Taygetus mountain ridge, Peloponnese, Greece. May 7, 2017.
Sadly, very little of Ancient Sparta survives to this day, although remnants of the once-great city-state do remain. Set among the grassy hillside to the north of present-day Sparta is the site of the Old Acropolis and Agora of Ancient Sparta, or what’s left of it (not a lot), the religious and administrative centre of the settlement from the 8th century BC until the Roman era. The remains of the 1st century BC semi-circular Ancient Theatre are probably Ancient Sparta’s most famous ruin, surviving today as nothing more than a partial retaining wall and a few seats and steps, all of which seems to be fighting a losing battle against encroachment by the unchecked surrounding greenery. It was all a bit of a let-down, especially having arrived here from the fascinating archaeological ruins of Ancient Olympia, except, of course, for the sunset vista of present-day Sparta sitting in the Evrotas River Valley and lorded over by the massive wall of the Taygetus mountain ridge – the sunset views over the valley from the tallest of the Spartan hills was awesome.

With evidence of Sparta’s once-great past severely lacking, a visitor to the town might just find themselves going out of their way to visit places one wouldn’t normally visit. Cue the Museum of the Olive & Greek Olive Oil. 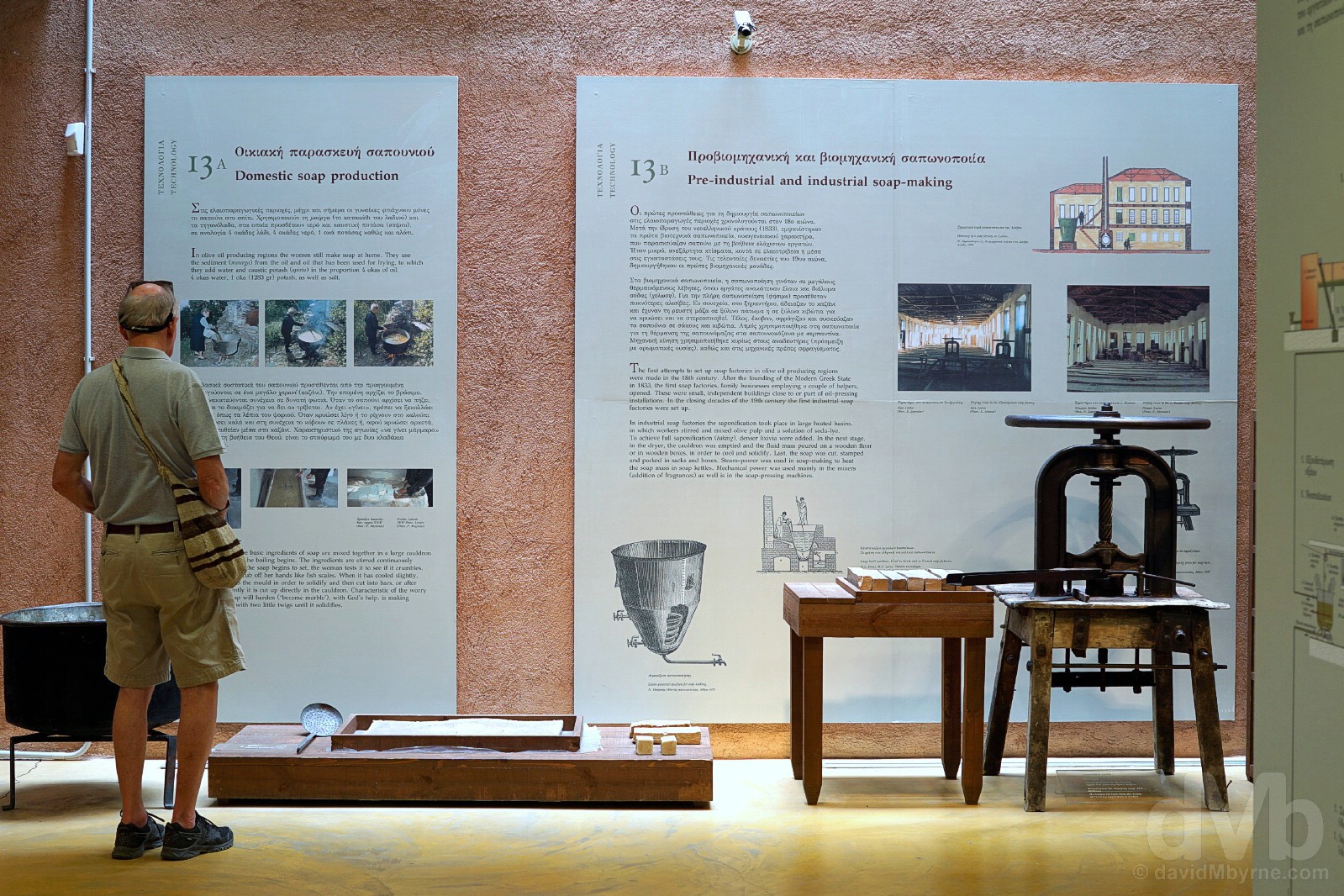 OLIVE MUSEUM | A display in the Museum of the Olive & Greek Olive Oil, Sparta, Peloponnese, Greece. May 8, 2017.

As a regional centre for the processing of olives (and citrus fruit), I wasn’t surprised to learn that Sparta had a museum dedicated to the small ovoid fruit of the European olive tree, especially as Greece is the third highest producer of olives on earth and that the Greeks themselves are the highest per capita consumers of olive oil. I was surprised, however, that I paid it a visit – I’m not a fan (of olives) – but I’ll freely admit to enjoying my visit to the immaculately presented museum, which delves into all things olive and olive oil, from its initial appearance in the Mediterranean in c. 8,000 BC to the many practical usages for its oil (cooking, fuel, ritual, perfume-making). The beautifully designed exhibition spaces cover a few airy floors and even spill outdoors to the courtyard where one will find reconstructions of olive presses and pressing technology dating from prehistoric to Byzantine times. Definitely worth a look.

Ancient Sparta – Mystras – Modern Sparta
Although the decline of Ancient Sparta that started with defeat in the Battle of Leuctra in 371 BC was terminal, people hung on; it wasn’t until the 1th century that the political and cultural centre of the region shifted some five kilometres across the Evrotas River valley to the fortified Taygetus mountain settlement of Mystras which would serve as the last stronghold and capital of the great Byzantine Empire during the 14th and 15th centuries, a period of great prosperity and cultural flowering. However, eventually Mystras too was abandoned when the new Sparta was built in the 1830s. Today travellers visit one once-great bastion of power, Ancient Sparta, to access another, UNESCO-listed Mystras, and I was no different.

Signing Off | The Complete Sparta Gallery 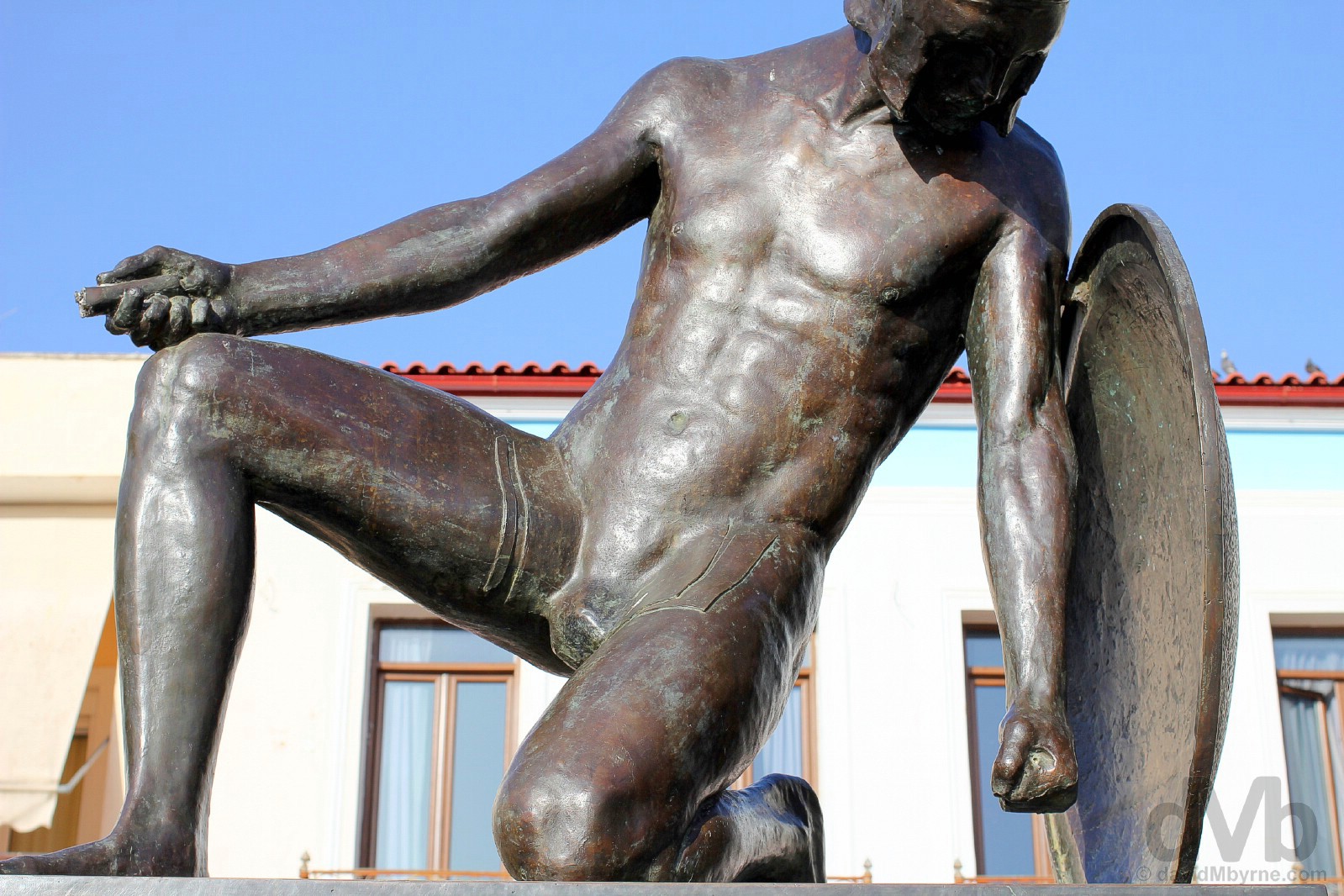 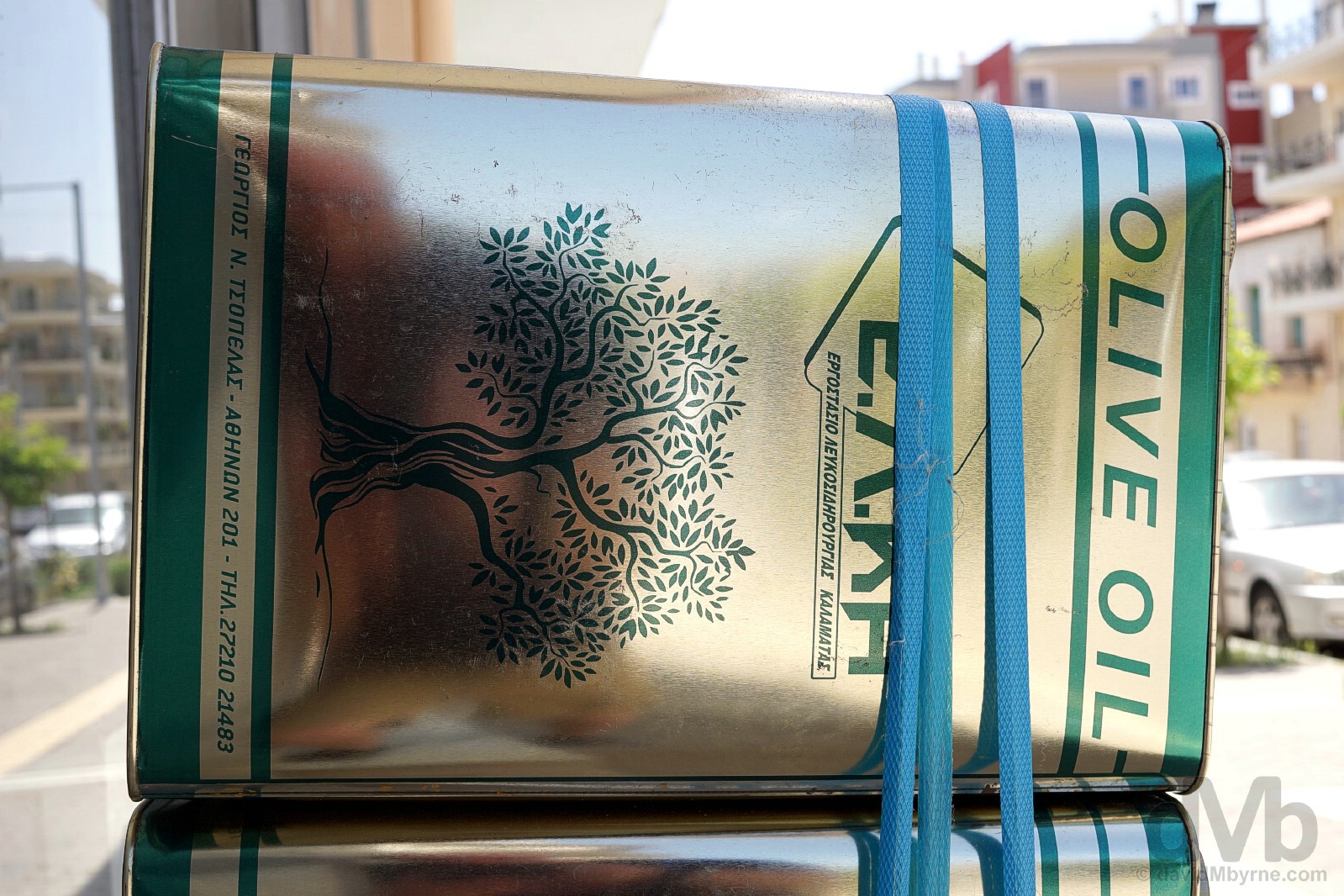 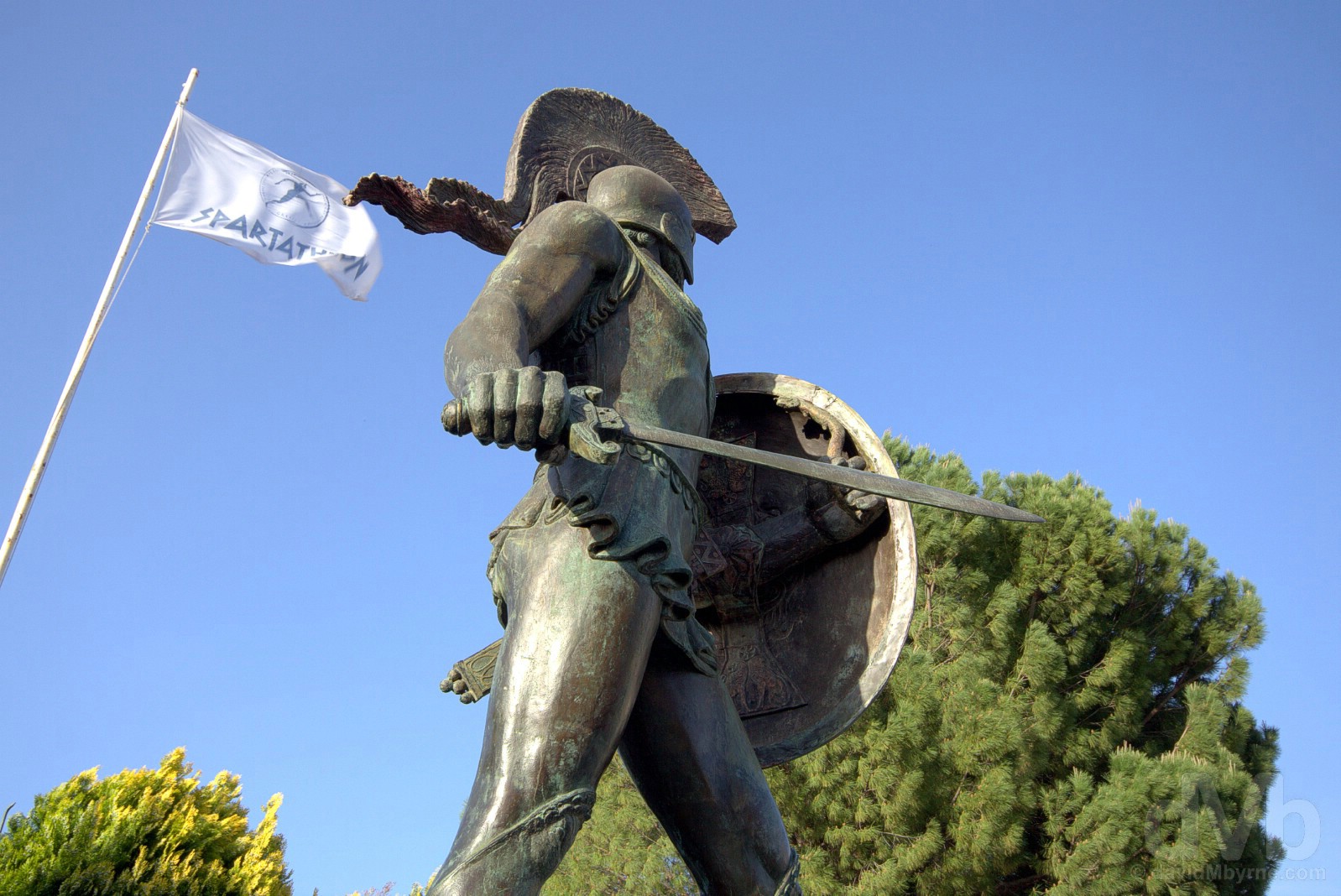 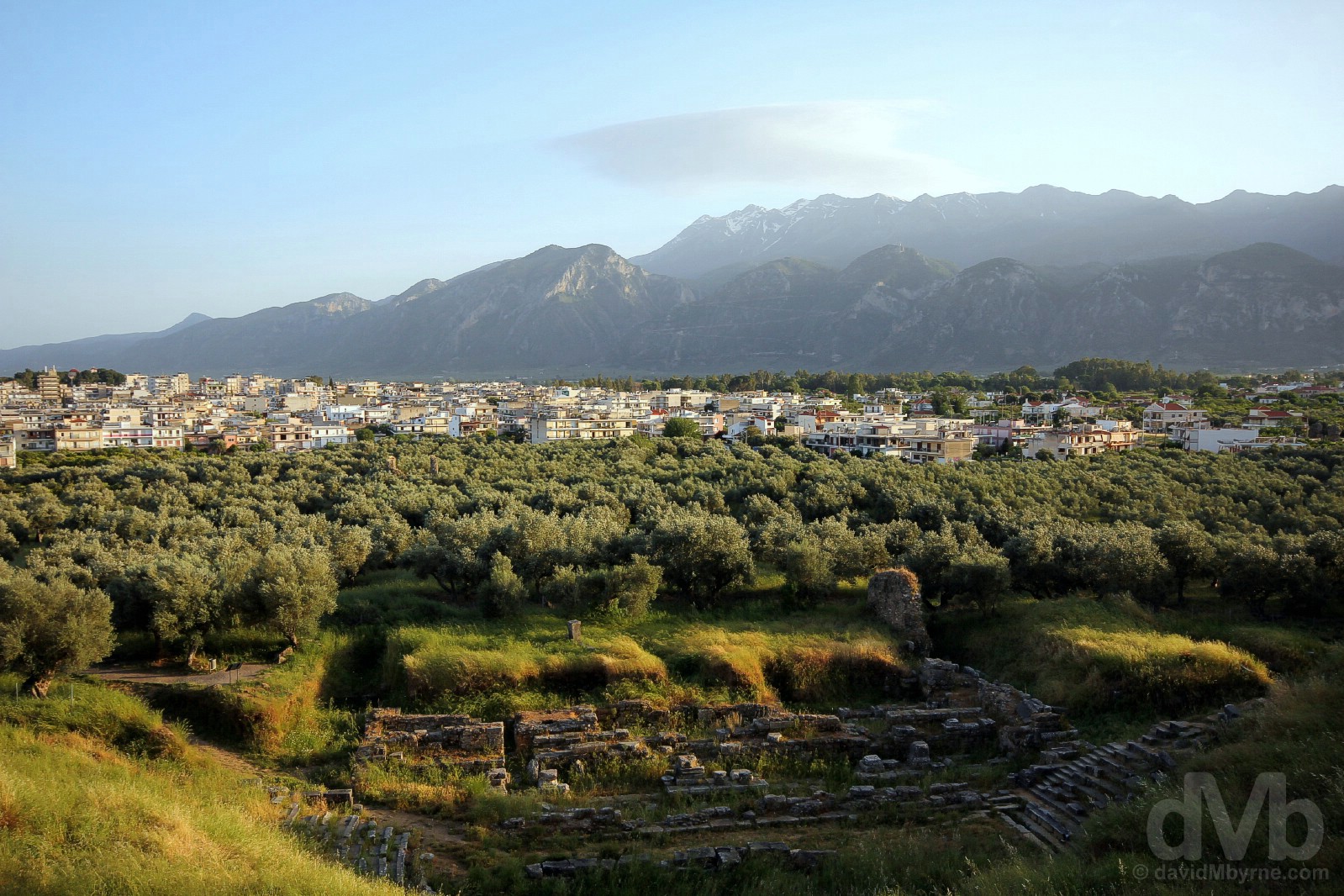 The ruins of the Theatre of the Old Acropolis of Ancient Sparta with the buildings of modern-day Sparta in the Evrotas River valley overlooked by the Taygetus mountain ridge, Peloponnese, Greece. May 7, 2017.

Approching sunset at the ruins of the Theatre of the Old Acropolis of Ancient Sparta with the buildings of modern-day Sparta in the Evrotas River valley overlooked by the Taygetus mountain ridge, Peloponnese, Greece. May 7, 2017. 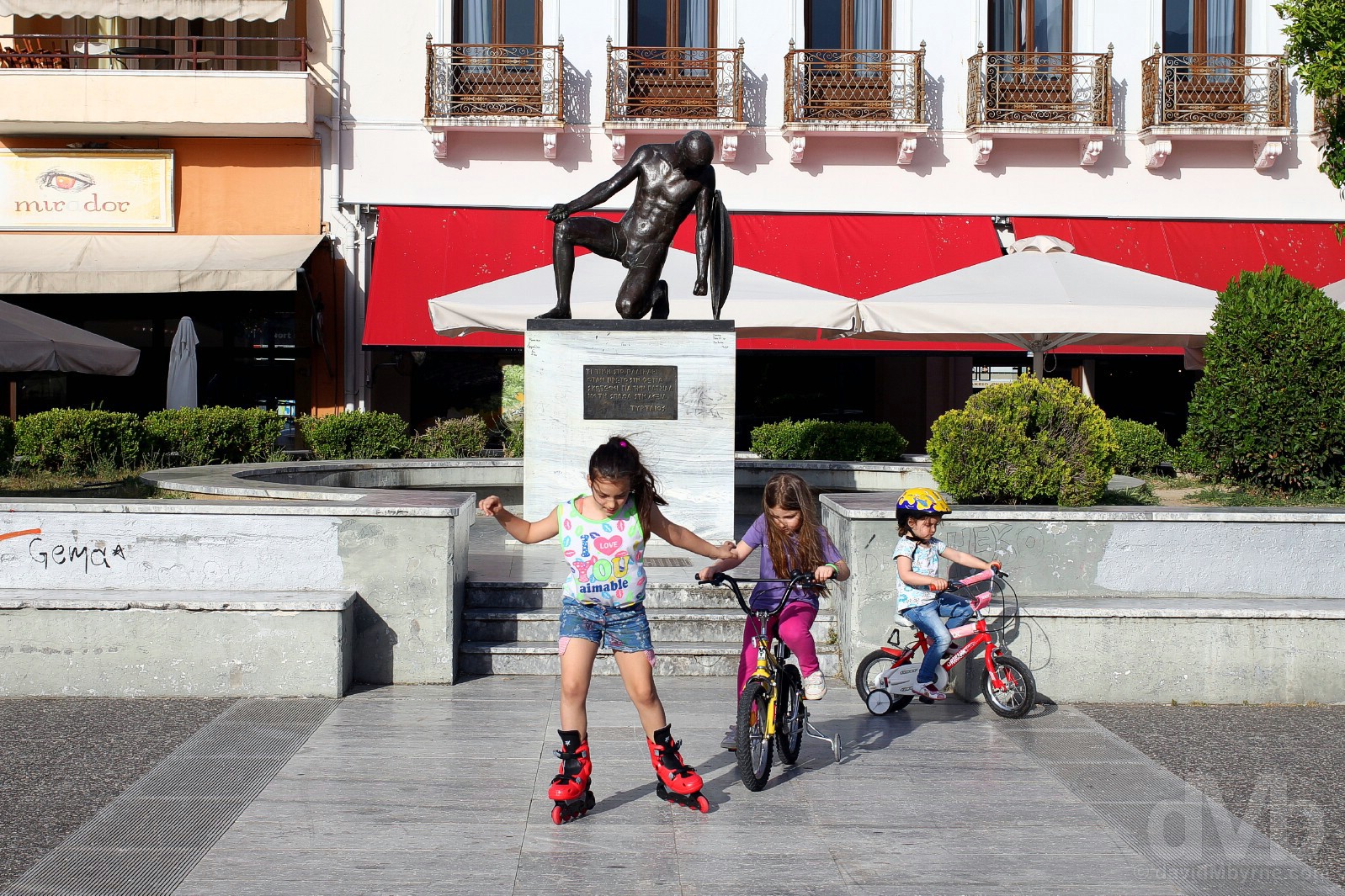