The Second-oldest National Park in the US & Home To No Less Than Five Of The World’s Ten Largest Trees, Including The Biggest Of Them All

Fooling around on a fallen giant in the misty Giant Forest of Sequoia National Park, California. April 2, 2013

Established on September 25, 1890, Sequoia National Park is the second-oldest park in the US National Park system, being awarded national park status only 1 week earlier than neighbouring Yosemite and some 18 years after Yellowstone, the world’s very first national park. Needless to say Sequoia is famous for its towering sequoia trees, trees that only grow on the west slope of the Sierra Nevada, usually between an elevation of 1,524-2,133 metres (5,000-7,000 ft). I naively feared I wouldn’t get to see the trees as I (slowly) drove through dense fog en route to the park’s Giant Forest, home to no less than five of the world’s ten largest trees. As it turned out the fog only served to add another layer of WOW! to what is already an awe-inspiring location. 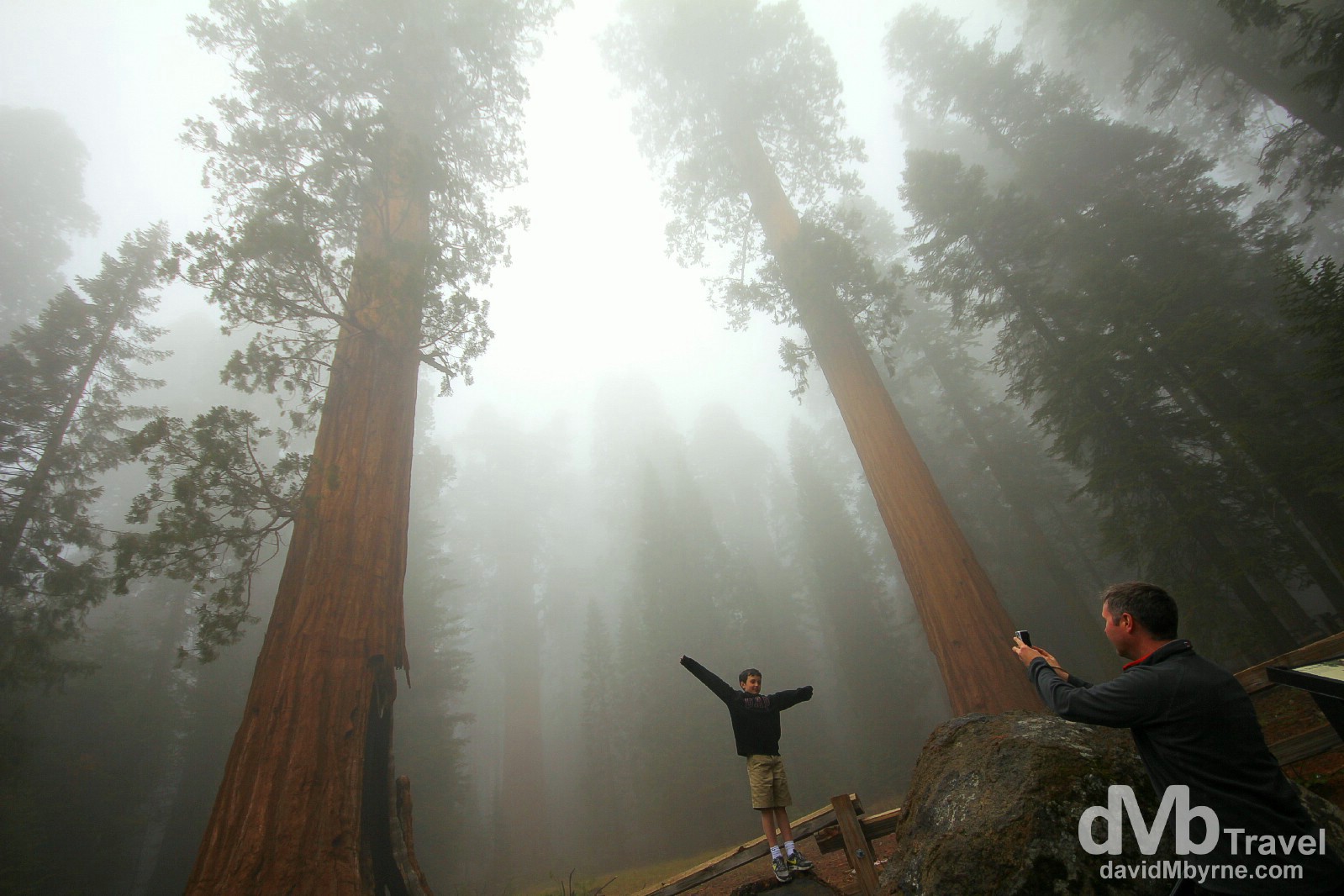 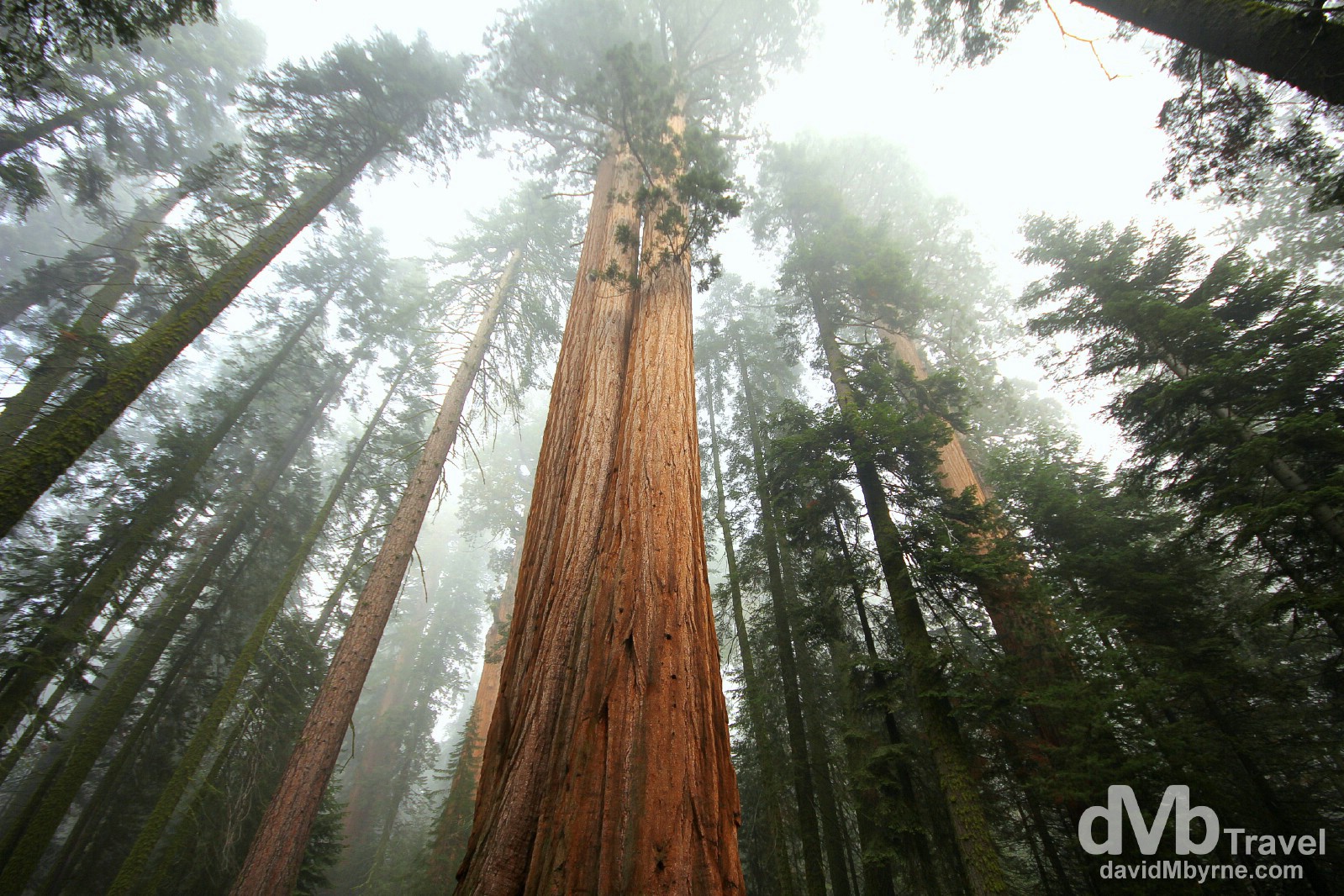 Last May I got up close & personal with a pretty big lump of a tree in Northland, New Zealand, Tane Mahuta, the largest kauri tree alive. However, in volume of total wood the giant sequoia has no rivals; it is the earth’s largest living tree species. At least one species of tree lives longer, one species has a greater diameter, & three species grow taller, but none are larger/has a greater mass than the sequoia. 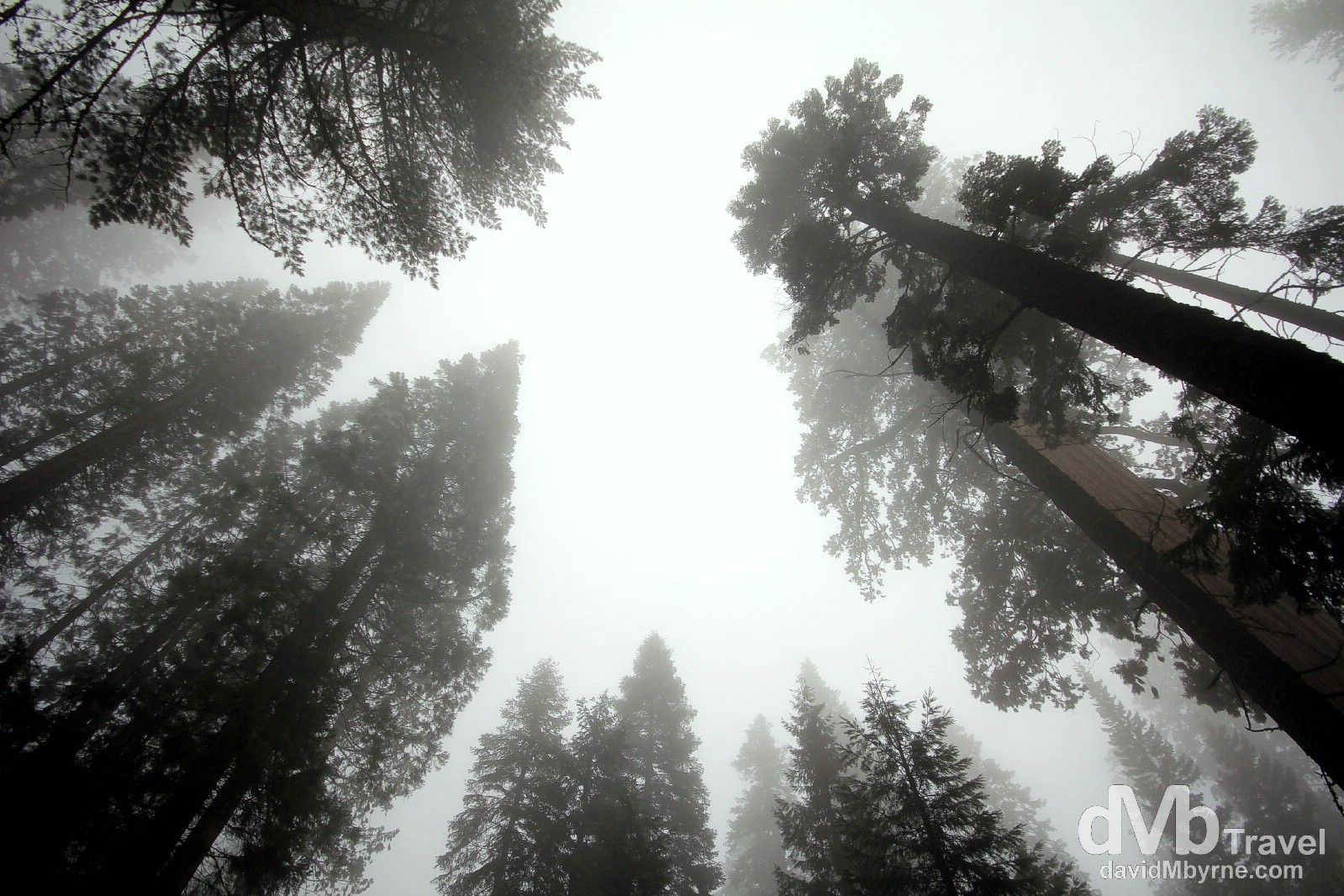 Most of the Sierra trees die of disease, fungi, etc., but nothing hurts the Big Tree. Barring accidents, it seems to be immortal.

Muir was partly right. Chemicals in the wood & bark provide resistance to insects and fungi, and thick bark insulates them from most fire. The main cause of sequoia deaths is toppling. They have a shallow root system with no taproot, the main root of a plant growing straight downward from the stem. Soil moisture, root damage, & strong winds can, and do, lead to toppling. 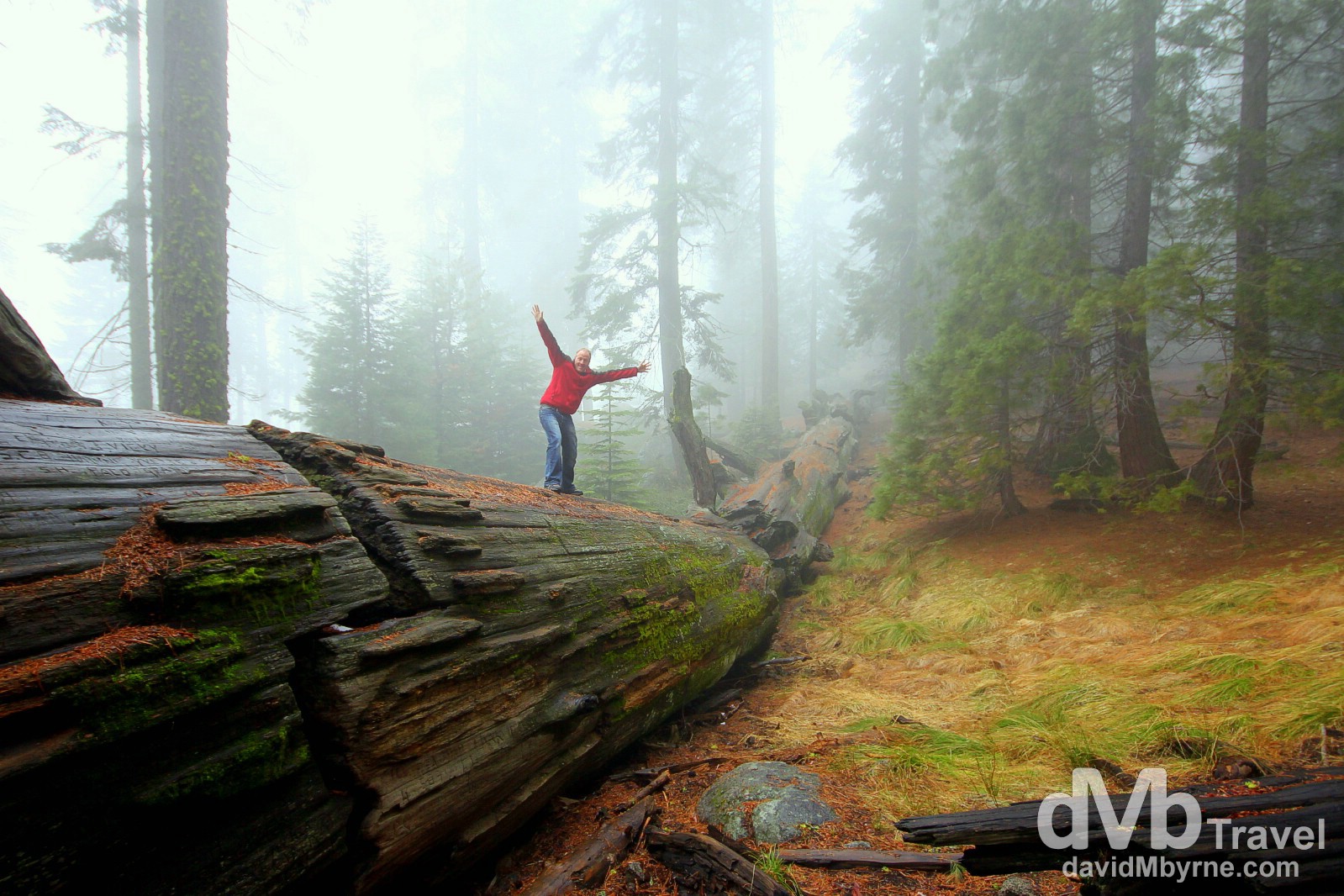 Fooling around on a fallen giant in The Giant Forest of Sequoia National Park, California, USA. April 2, 2013. 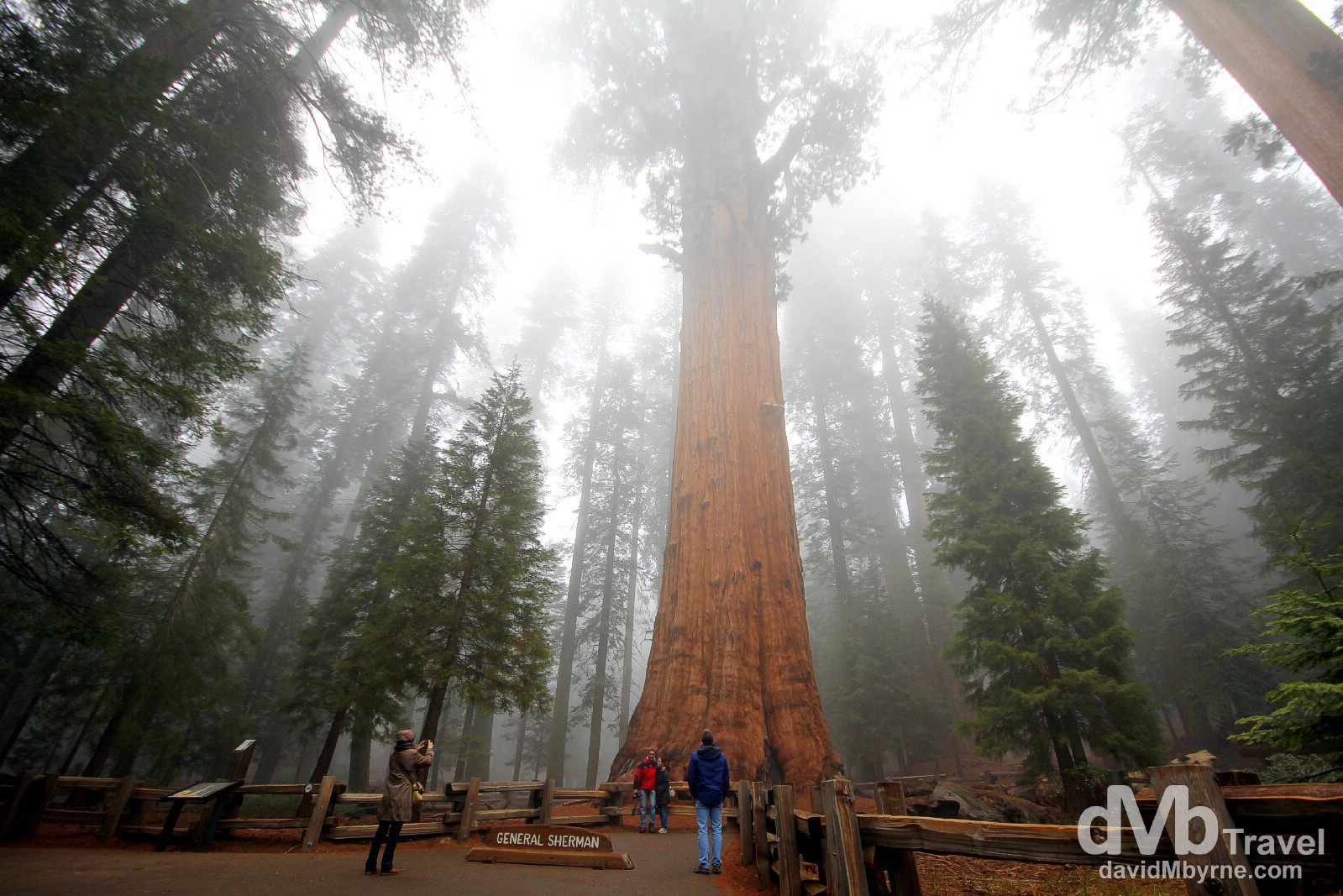 He is 84 metres (275 ft) high (his canopy is dead so unfortunately he won’t be growing any taller); his ever-expanding, nearly-conical trunk – which is estimated to weigh 1,385 tons – has a circumference at ground level of 31.3 metres (103 ft); his largest branch is almost 2.1 metres (7 ft) in diameter; & every year he grows enough new wood to produce an 18.2 metre (60 ft) tree of normal proportions. All of this makes the 2,200-year-old General Sherman in Sequoia’s Giant Forest the largest tree in the world. So there. 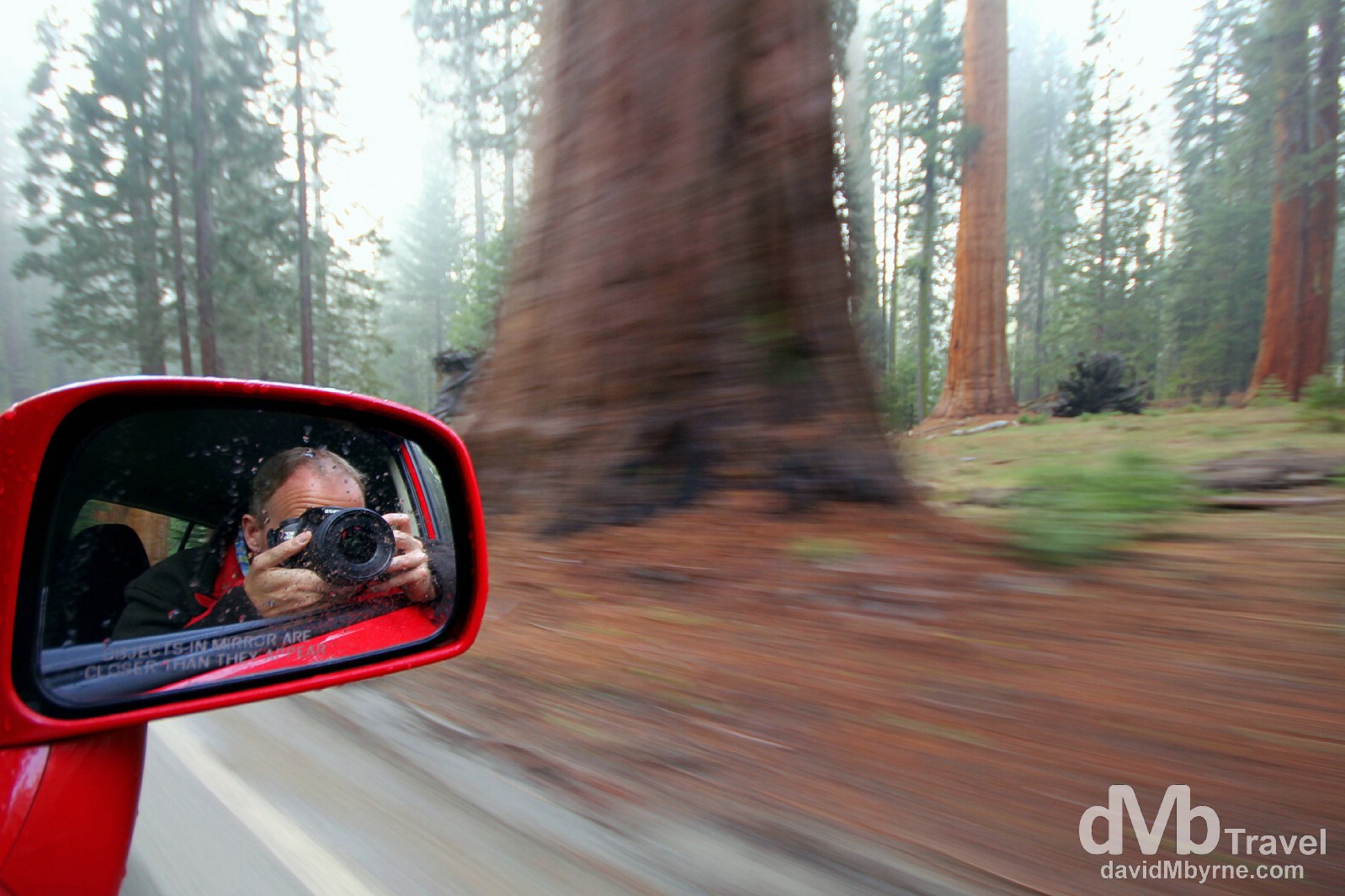 I arrived in Sequoia National Park from Yosemite National Park further north. This is a reflection selfie captured as I was leaving Sequoia en route to yet another park, Death Valley National Park, the third US Southwest national park I was to visit in as many days as part of an 8-day US Southwest road trip. California, USA. April 2, 2013.