I‘m in a small community town called Dairy Flat, about 60 kilometres north of Auckland, the largest city in New Zealand (although not the capital, that’s Wellington). It has been an eventful last five days, the first five days of this, my second trip to Aotearoa, the Land of the Long White Cloud. I’ve passed the days in my NZD$35-a-day camper van, one I’ve affectionately christened Wilma, touring Northland, the rugged finger of land stretching for some 400 kilometres north of Auckland. Up here it’s all about natural attractions; it’s a sparsely populated area of endless, deserted beaches, rugged coastal scenery & long, long drives. I never really intended to explore this part of the country, never intended to be still north of Auckland a week after arriving in the country. But I did and now that it – Northland – has been explored I’ll be starting the drive south of the city first thing in the morning. But before that here’s a pictorial look back at what I’ve been up to over the 5 days as I drove up, up, up Northland’s east coast, before driving down, down, down its west coast.

It didn’t take long to get reacquainted with the beauty of this country. My first night in Wilma was spent overlooking Muriwai Beach (map pointer A) on the Tasman Sea coast west of Auckland. This stretch of the coast epitomises rugged – bush-shrouded ranges & wild, endless black-sand beaches, with Muriwai’s expansive black sand stretching for over 50 kilometres alone. 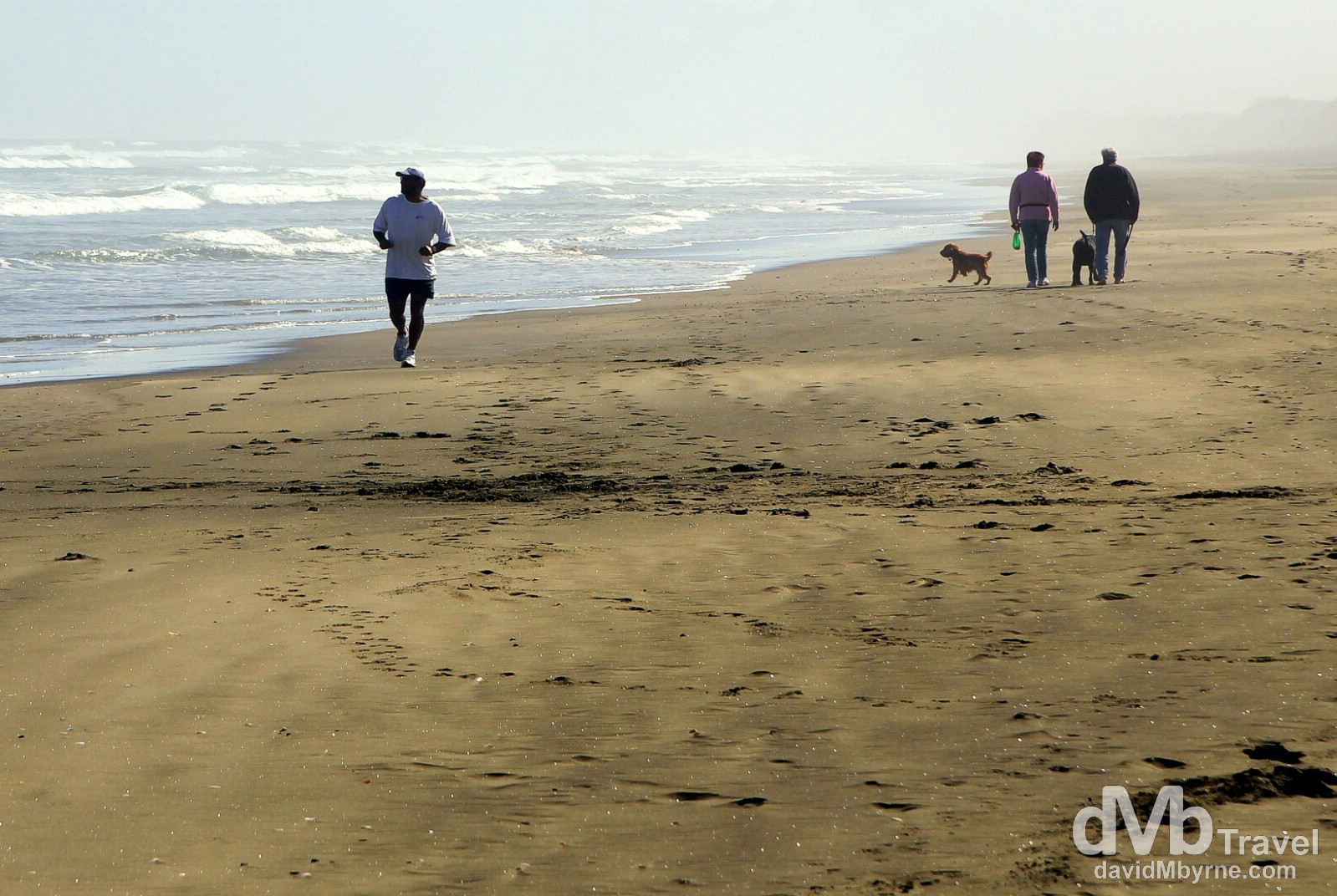 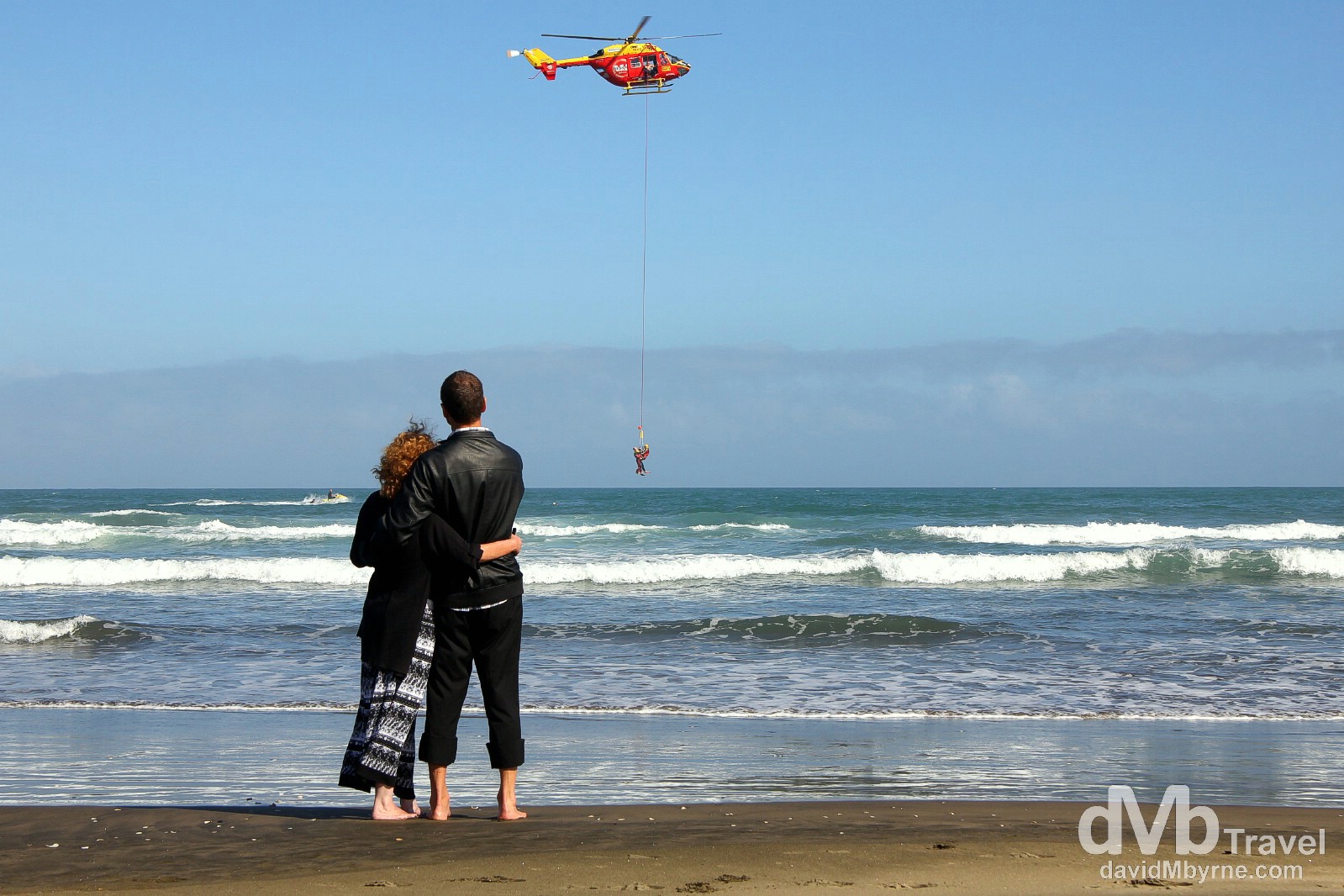 A bit further north from Muriwai Beach is Shelly Beach (map pointer B), just another quaint, unpopulated stretch of (golden) sand. This beach sits on Kaipara Harbour, the largest natural harbour in the Southern Hemisphere. It was a nice place to linger for a while and when doing so, and shortly after lunch, I captured the above picture of gulls on Shelly Beach pier. 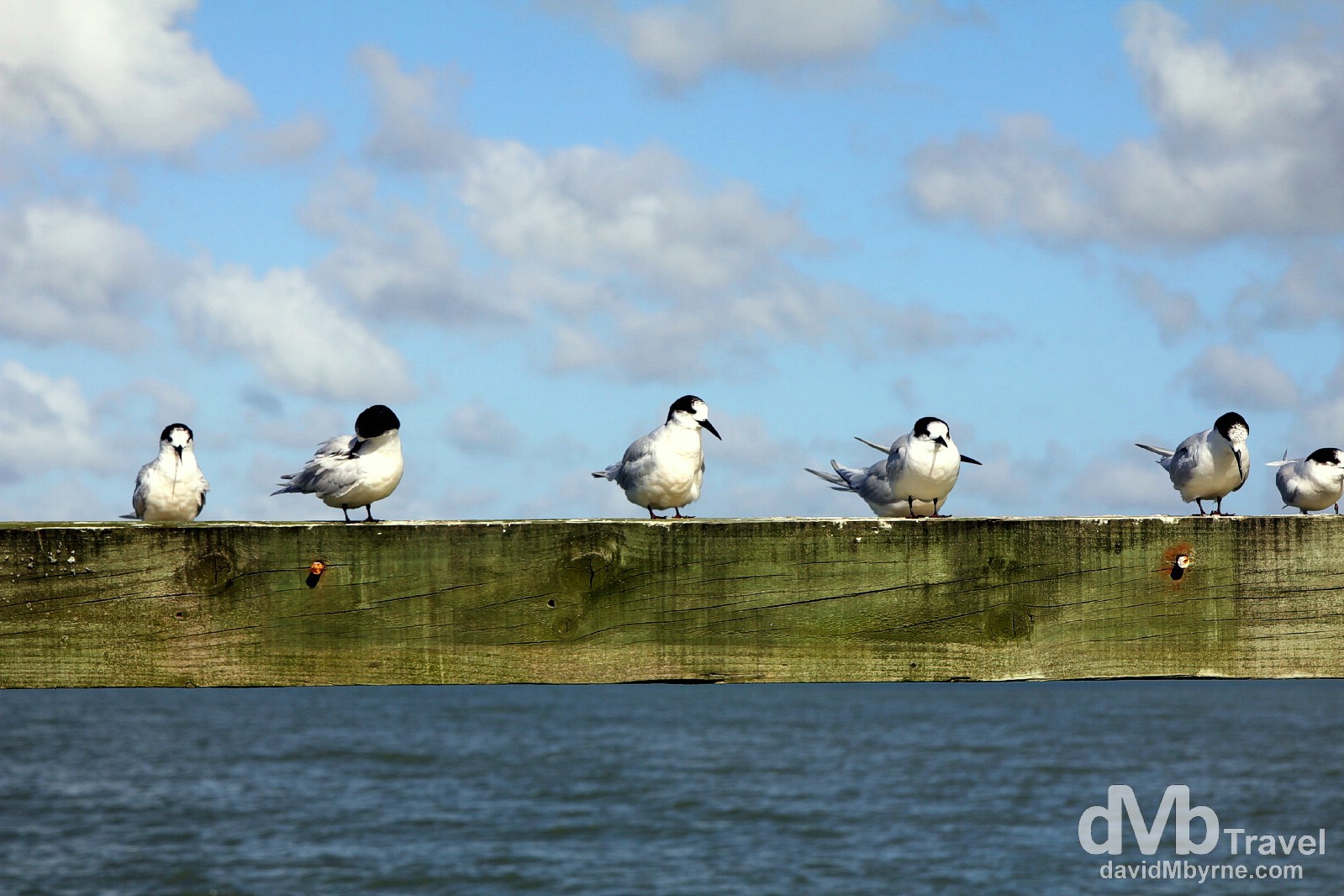 Coast to Coast
Over on the east coast north of Auckland & things get even more rugged, even more remote – the partly unsealed road approaching the 588-hectare Tawharanui Regional Park (map pointer C) leaves you in no doubt as to its remoteness. This special place is an open sanctuary for native birds, protected by a pest-proof fence. The camp site here, one of dozens in the country administered by the New Zealand government’s DoC (Department of Conversation), fronts this beach/coast & I spent a few quiet, late-afternoon hours down here taking pictures. The serenity was bliss, the location stunning. 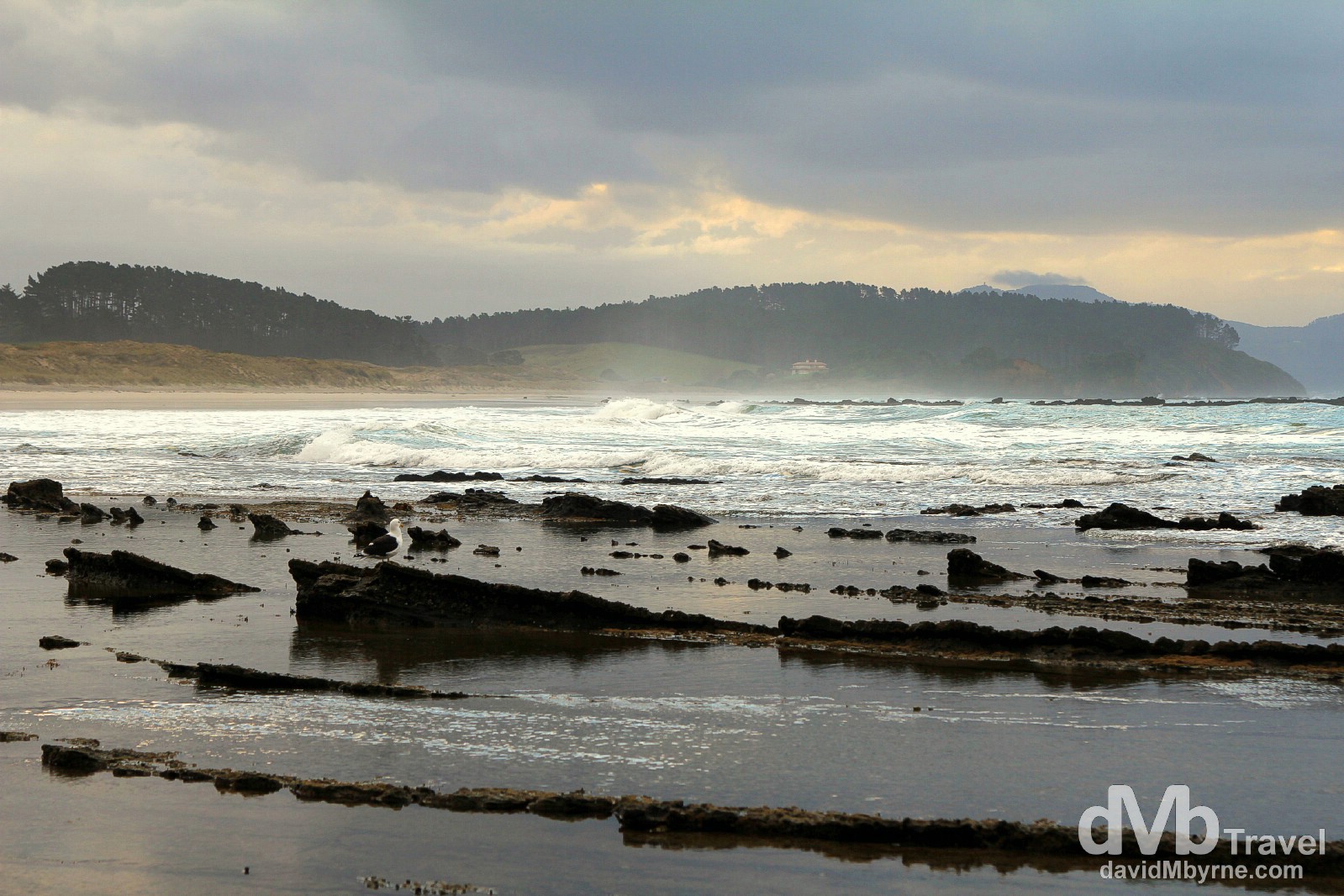 Having overnighted in the Tawharanui Regional Park DoC camp site, I made sure to get back down on the beach early in the morning with my camera before continuing the drive further north. 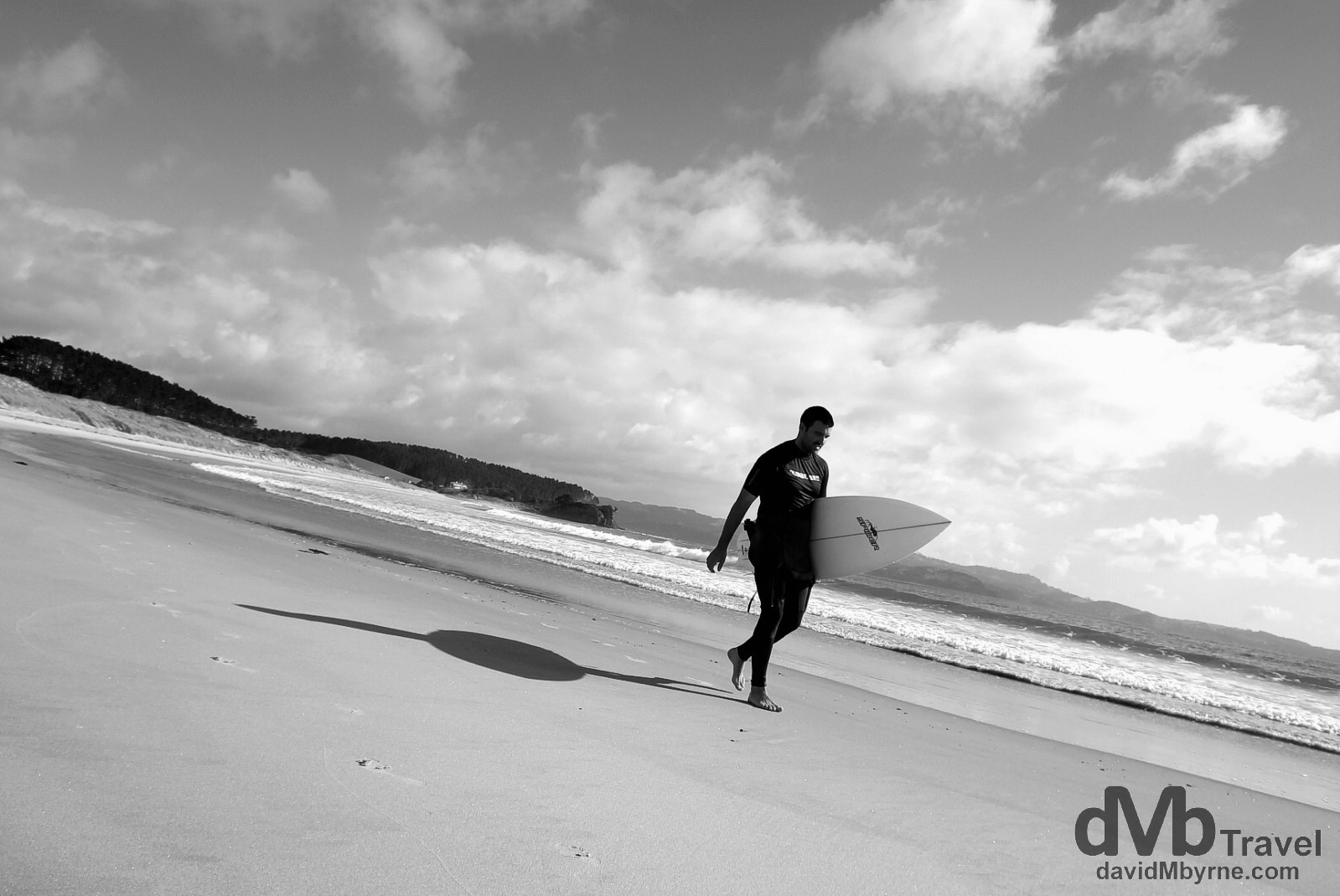 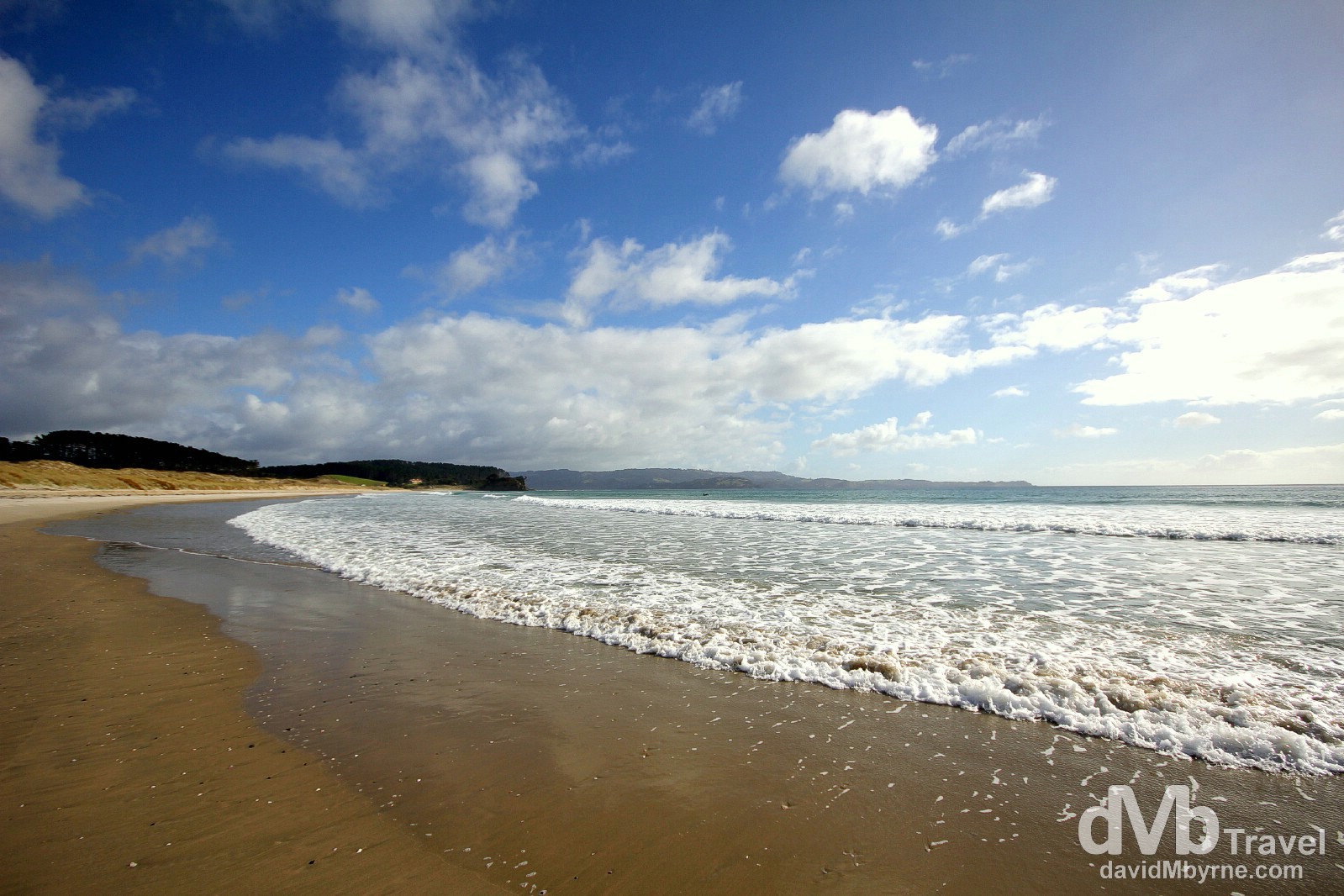 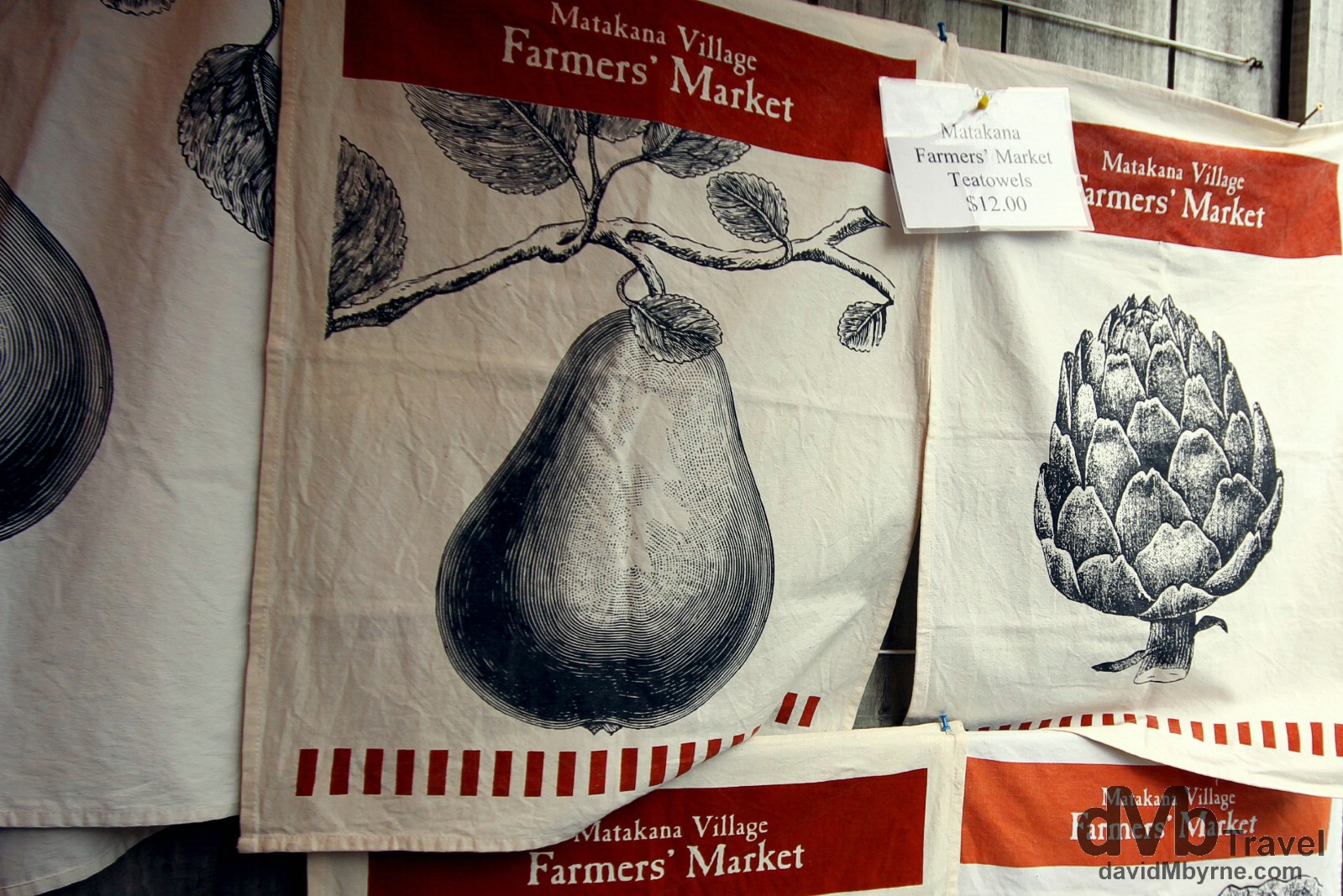 The drive up the east coast of Northland was largely uneventful and it rained heavily most of the time. I was in no particular rush but still not much was happening, until I paid a visit to McDonald’s in Whangarei, New Zealand’s northern most city & the capital of the Northland region. 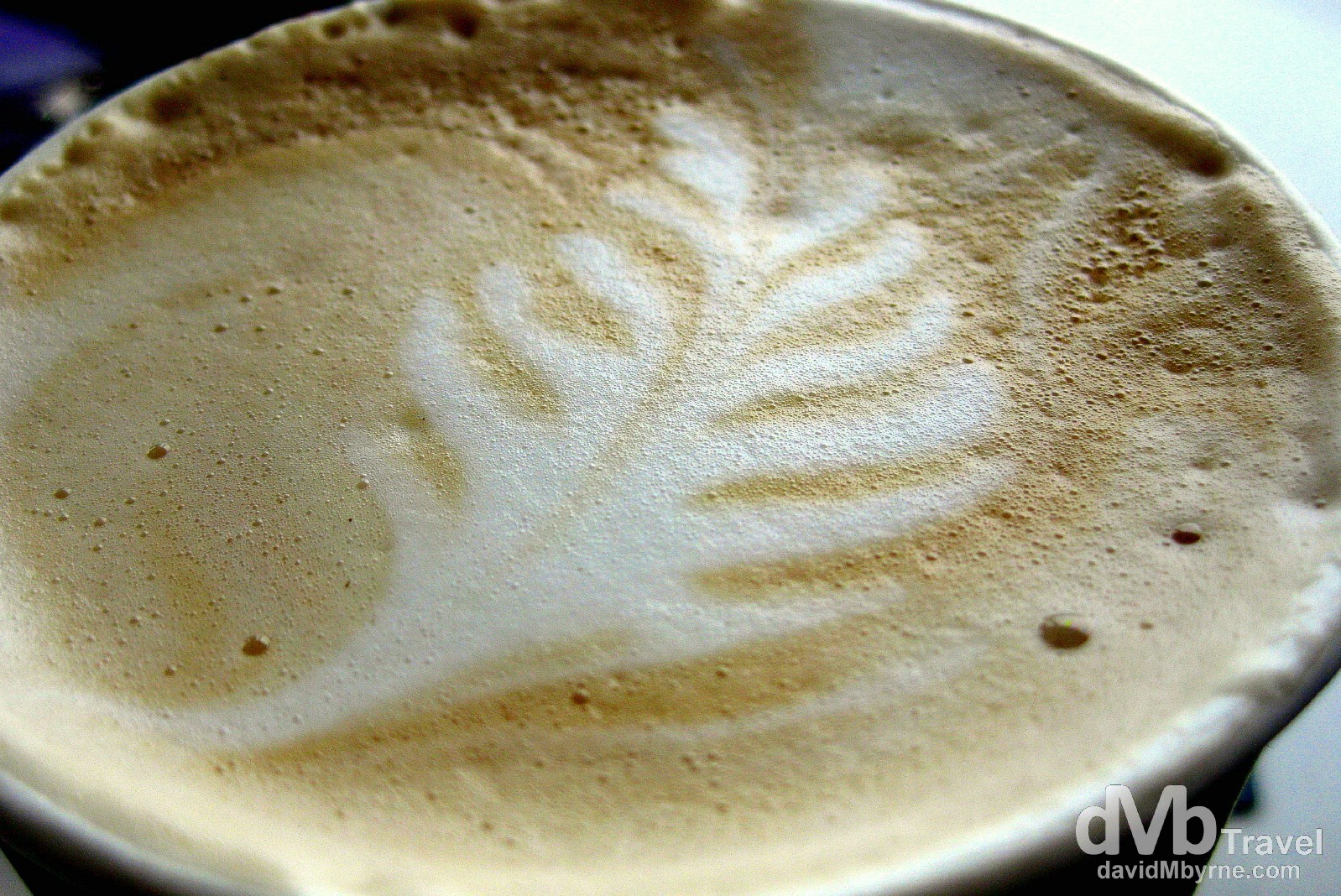 A quick stop in McDonald’s proved to be the highlight of this particular day & one of the many unexpected highlights of the last few days. A latte with an awesome kiwi twist. It was almost a shame to drink it. McDonald’s, Whangarei (map pointer E), North Island, New Zealand. April 29th 2012.

The following picture is an early morning image I captured from the water’s edge on the beach in Matauri Bay (map pointer F), located in an area of Northland that Lonely Planet places under the heading The Far-Flung North. Yes, it’s far-flung alright, and very pretty. 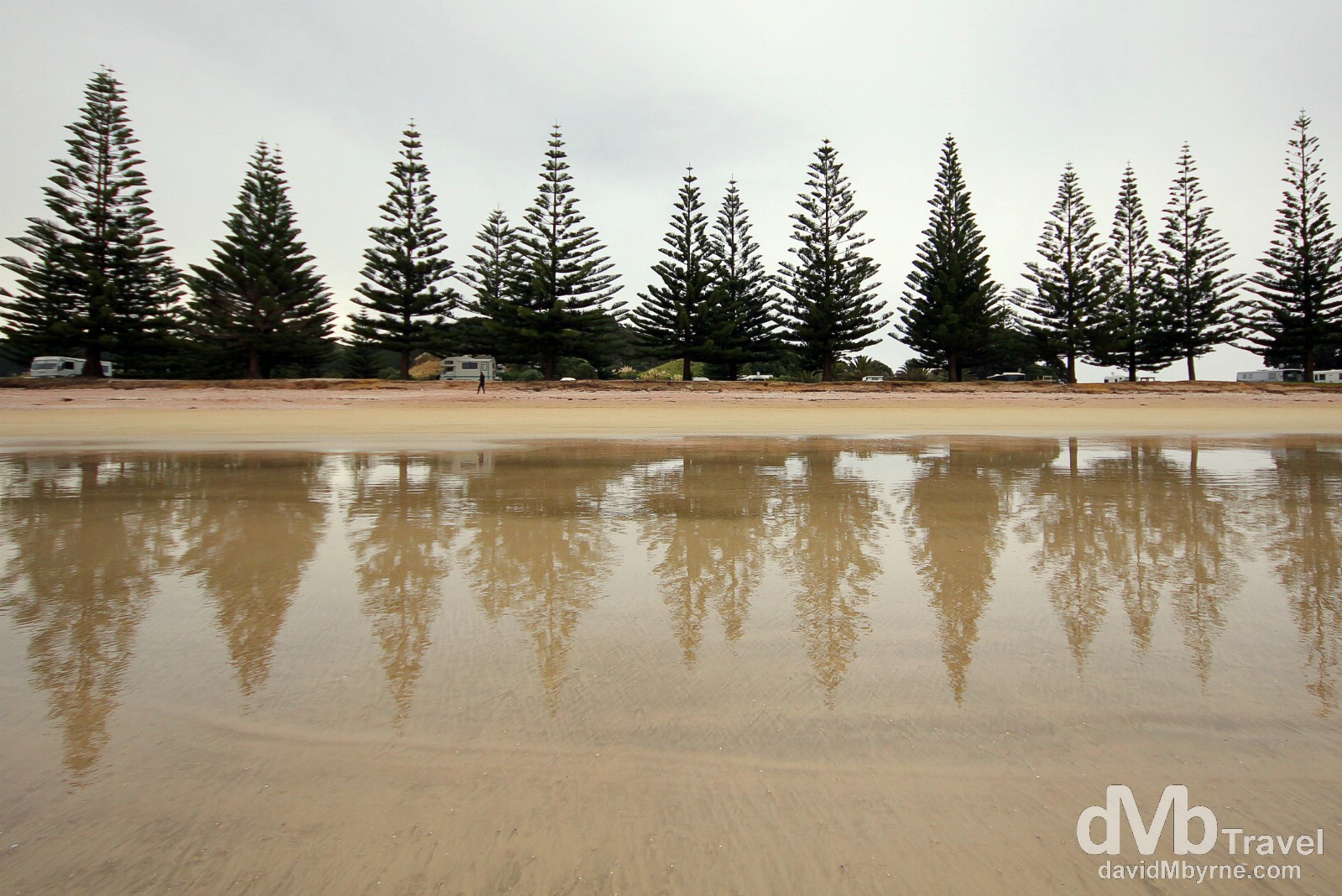 The trees seen here formed a very picturesque barrier between the beach and the camp ground I called home for a night on the continuing drive (even further) north. On top of a headland overlooking Matauri’s picturesque semi-circular bay is a monument to the Rainbow Warrior, the Greenpeace flagship sunk in Auckland harbour in July 1985 as the result of a botched attack by French secret service agents (the ship was preparing to sail to Moruroa Atoll near Tahiti to protest against French nuclear testing). The ship’s final underwater resting place is just offshore and is a popular scuba dive site.

Cape Reinga
A long drive on State Highway 1, a.k.a. Far North Road, in miserable conditions brought me to Cape Reinga (map pointer G), which sits at the end of the Aupouri Peninsula, a long and thin 108 kilometre peninsula of land that forms New Zealand’s northern extremity. The name of the cape comes from the Maori word Reinga, meaning the Underworld, a reference to Maori – ethnic minority New Zealanders – belief that the cape is the point where the spirits of the dead enter the underworld. 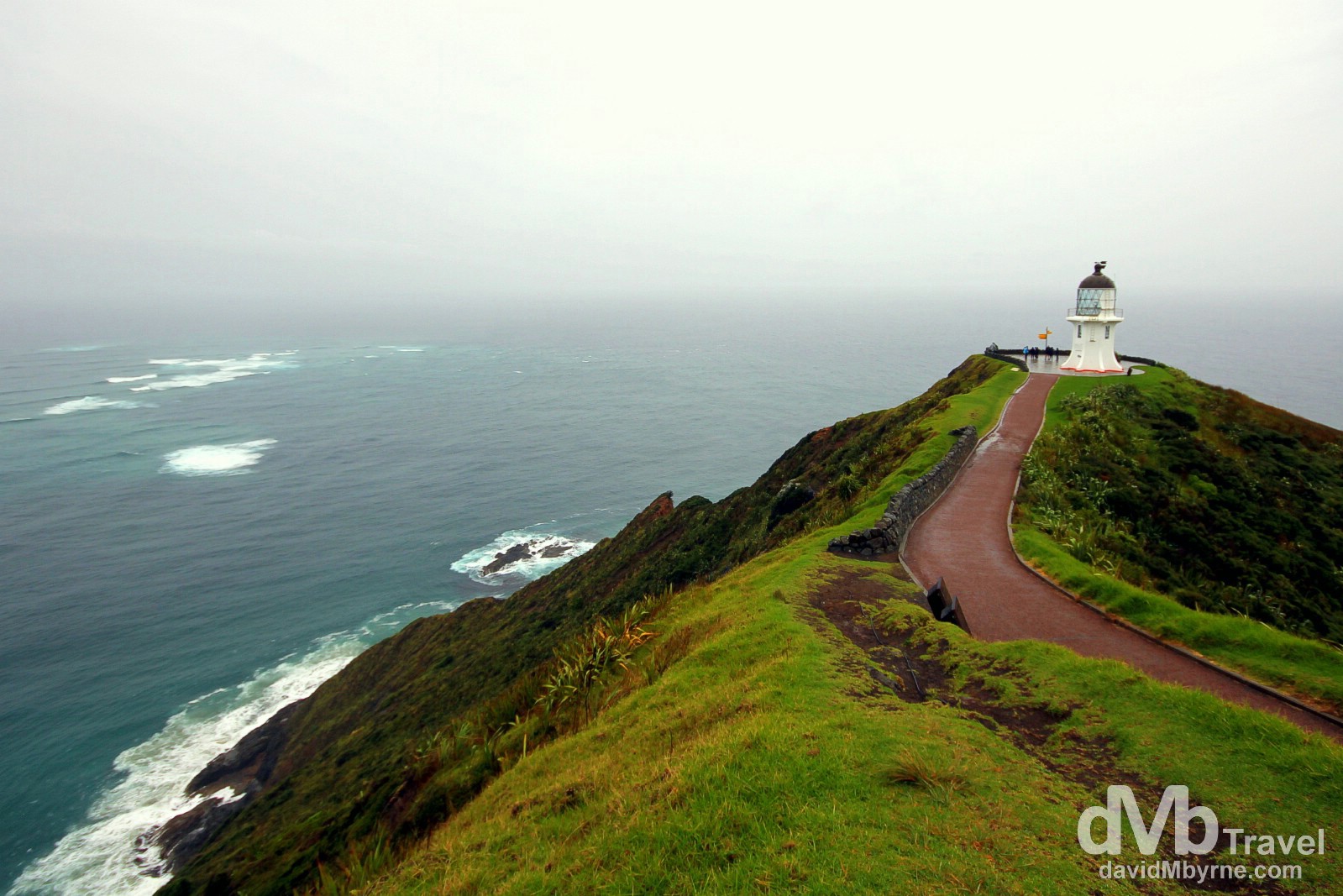 Things are very remote up here (the nearest town is over 100 kilometres away) & once you get here you’ve no choice but to turn around and head back south. As remote as this is, however, it still isn’t the most northern point of the New Zealand mainland; that honour goes to Surville Cliffs, 35 kilometres to the east of here, cliffs that are geographically 3 kilometres further north (what’s a mere 3 kilometres among very remote headlands in this infrequently visited part of the world?). The end-of-the-world feeling one gets standing here, looking out over the vast expanse of ocean, is amazing. The unsettled waters visible in the top-left of the above image are the result of a tidal race, with the waters of the Tasman Sea (to the west/left) and the Pacific Ocean (to the east/right) breaking together (the cape is considered the separation marker between the two bodies of water). The 10 metre-high lighthouse seen here sits 165 metres above sea level & was the last attended lighthouse to be built in New Zealand. Light shone for the first time from here in 1941, replacing the lighthouse on nearby Motuopao Island, it having been built in 1897. The lighthouse been fully automated since 1987 & is controlled and monitored by Maritime New Zealand staff in Wellington, the country’s capital some 1,000 kilometres away (south, of course). It’s one of the first lights that shipping observes when arriving from the Tasman Sea & northern Pacific, something Abel Tasman wouldn’t have had the benefit of – he was the first European voyager to sail past New Zealand’s north-western tip way back in 1643. Cape Reinga, North Island, New Zealand. April 30th 2012.

Lighthouses, from ancient times, have fascinated members of the human race. There is something about a lighted beacon that suggests hope and trust and appeals to the better instincts of mankind.

Time to head south, to get way from the ocean (although not too far away), and to look up. 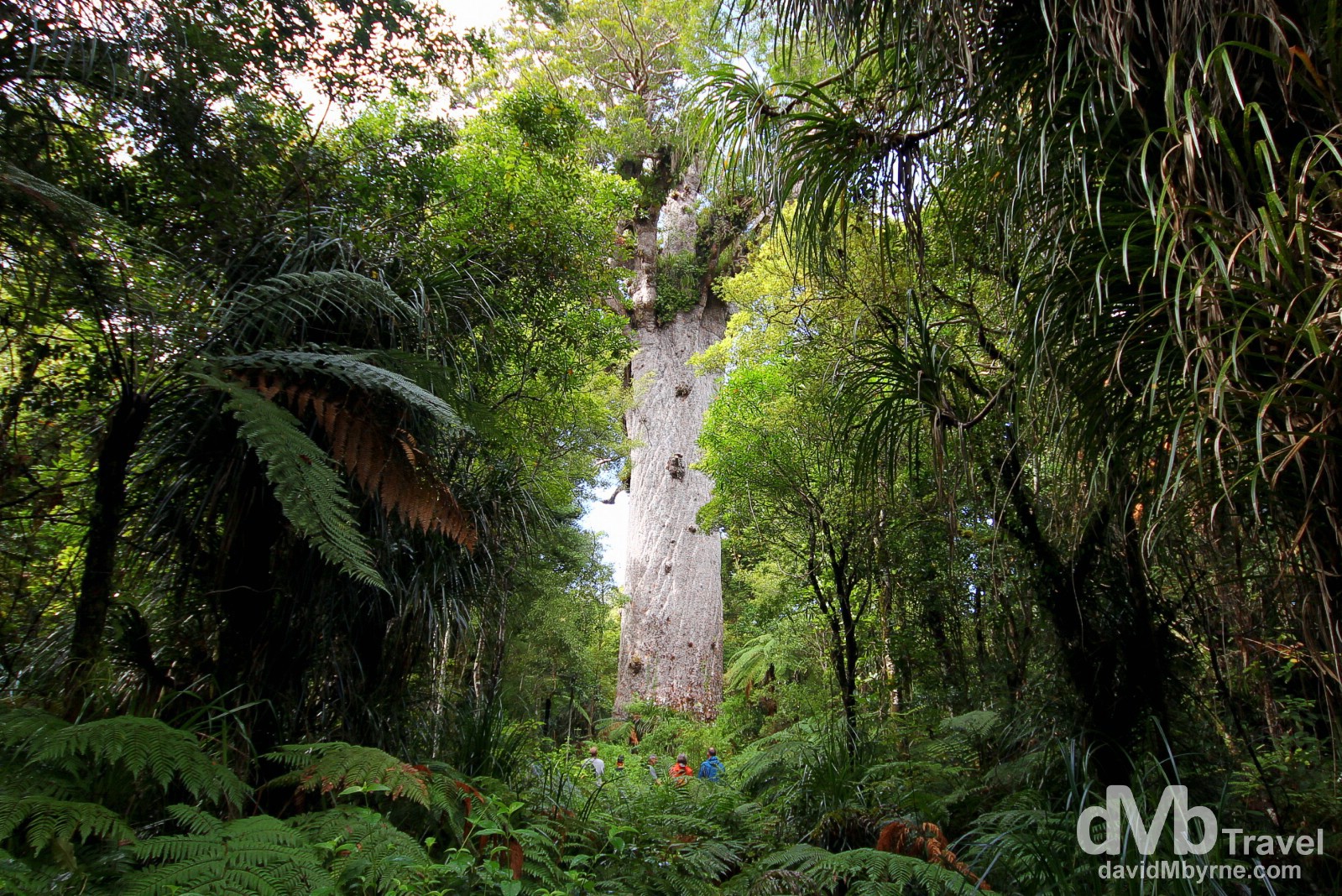 Tane Mahuta – Lord of the Forest. You are in presence of one of the most ancient of trees.

– An inscription in front of Tane Mahuta.

At 51 metres high, with a 13.8 metre girth and wood mass of 244.5 cubic metres, Tane Mahuta is the largest kauri tree alive. He’s also one of the oldest – he’s been holding court here for somewhere between 1200 and 2000 years (no one is quite sure exactly how long). He’s found in the Waipoua Kauri Forest (map pointer H), one of the great natural highlights of Northland’s west coast. Kauri forests were once widespread in the northern part of the country, but when the Europeans arrived in the mid-19th century they started chopping them down for timber; a lot of the mid-19th century housing in Auckland was made exclusively of kauri. Now only remnants of the once-great forests remain. A fully grown kauri can reach 60 metres in height and have a trunk 5 to 8 metres in diameter & coming face-to-trunk with a colossal and ancient kauri tree is quite the experience – its enormous trunk sweeps skywards, straight & bare, while its crown spreads outwards providing a home for vast numbers of perching plants.