At dawn near the summit of Mount Kinabalu, Malaysian Borneo. June 23, 2012

Earlier today, very early today, saw me standing on the summit of Mount Kinabalu in Sabah, Malaysian Borneo, the highest peak on the island of Borneo, itself the third largest island in the world (after Greenland & New Guinea). Also the highest point between the Himalayas & New Guinea, the mountain is a pretty big lump of rock or, more precisely, a pretty big granite massif, a block of the earth’s crust bounded by faults and shifted to form peaks of a mountain range. Its peak, ironically called Low’s Peak, tops out at a 4,095 metres (13,436 ft) which, by mountain standards, isn’t all that high – in comparison Everest, the Grand Daddy of them all, tops out at 8,848 metres (29,029 ft) – but try telling that to the thousands who huff & puff their way to the summit every year. Needless to say I lugged my camera and a few lenses up there when, in hindsight, only one was needed – my wide-angle. Here’s a selection of pictures taken over the course of the 8 hours & 40 minutes I spent on the 17.5 kilometre well-trodden path up & down the mountain. 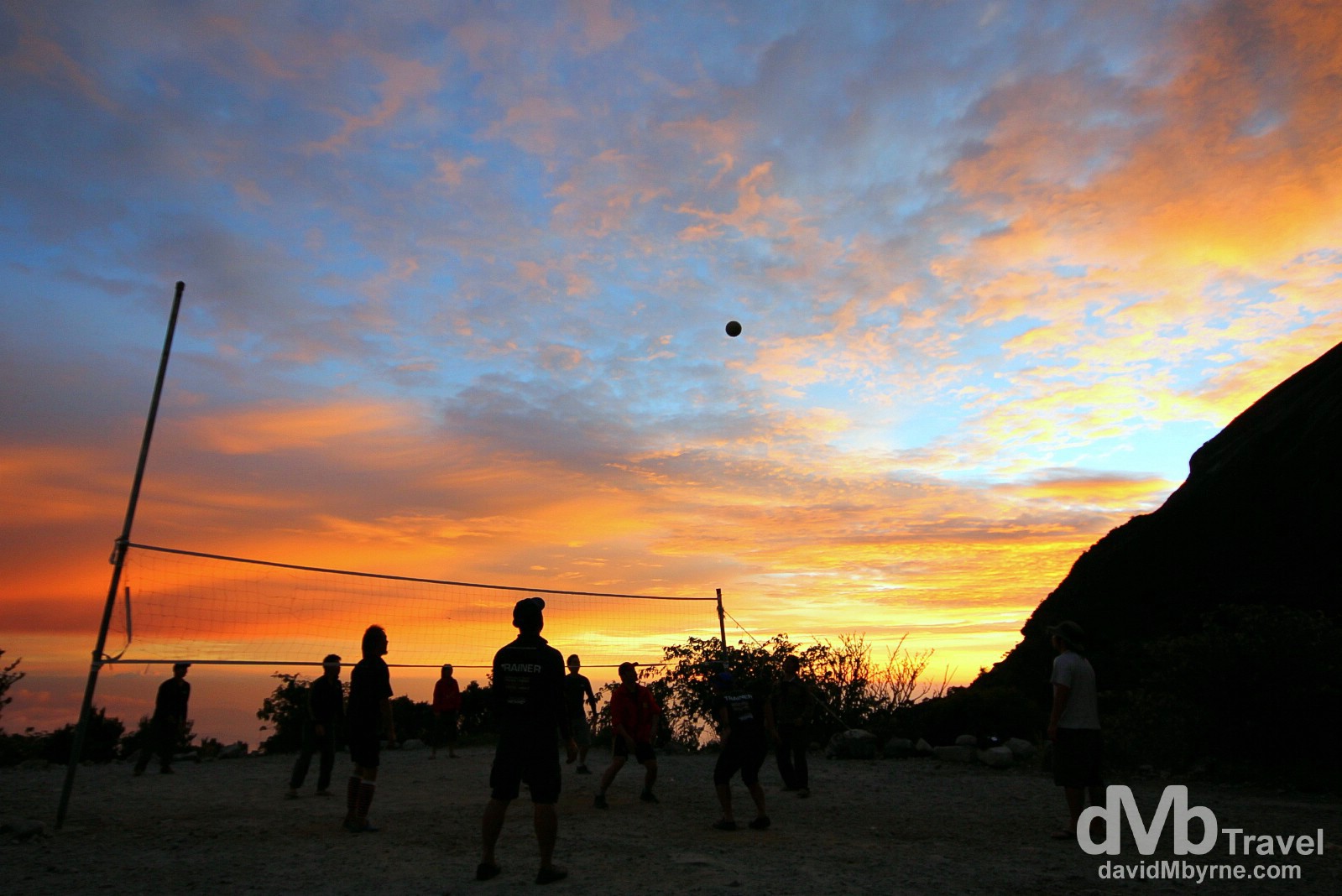 The walk up Mount Kinabalu is a 2-day affair, or at least it should be (it can be done in 1 torturous day of hiking). The first day sees the enthusiastic walk the 6 kilometres from the start of the trail up, up & up to the village of Laban Rata, an area of huts & rest houses where the majority of climbers halt for the night (& are glad to do so). Having set out at 9:00 a.m. on day 1, I reached the village at 12:20 p.m., meaning I had the afternoon to take in the scenery. And oh what scenery. 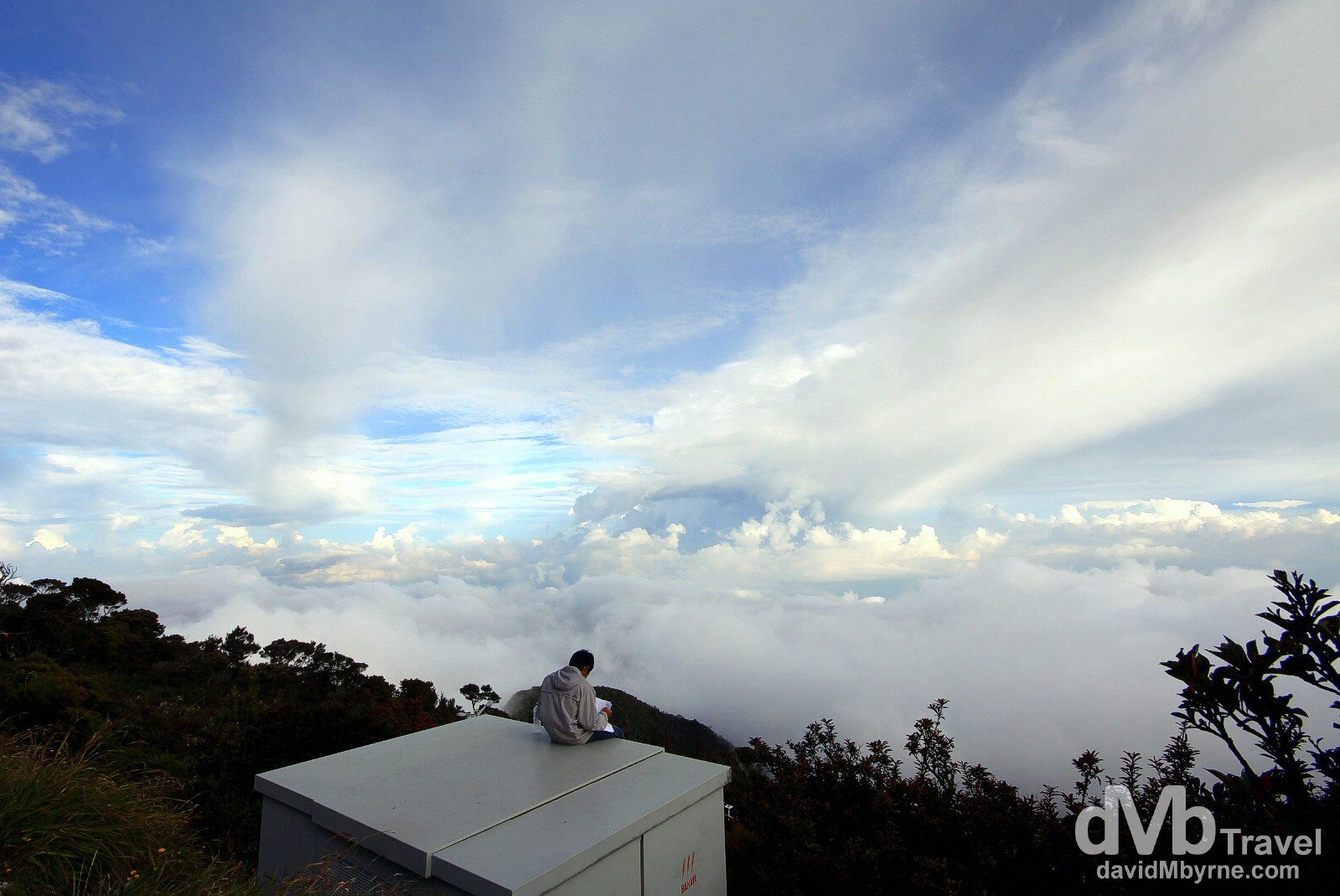 Above the clouds at Laban Rata high on the slopes of Mount Kinabalu. At this height (3,273 metres (10,738 ft)) I was well above the cloud line, looking down on the vast sea of clouds spread out over Sabah. I almost felt like I was floating. It was beautiful and I was happy to sit there recuperating & staring out into the white nothingness for most of the afternoon. Laban Rata on the upper slopes of Mount Kinabalu, Sabah, Malaysian Borneo. June 22, 2012.

I had quite a bit of time to kill on this afternoon so I took a lot of pictures of the white nothingness far below me. I got a lot of pictures, but very few I liked. The above picture (that’s not me in the picture, by the way) is probably my pick of the bunch – it was deemed the best of a bad lot. As beautiful as that white nothingness is/was, it’s a scene that didn’t photograph well – white nothingness rarely does. However, when the sun went down everything changed. The visual spectacle of a Mount Kinabalu sunset was a nice reward for the effort it took to get here and a nice way to end day one of the hike. 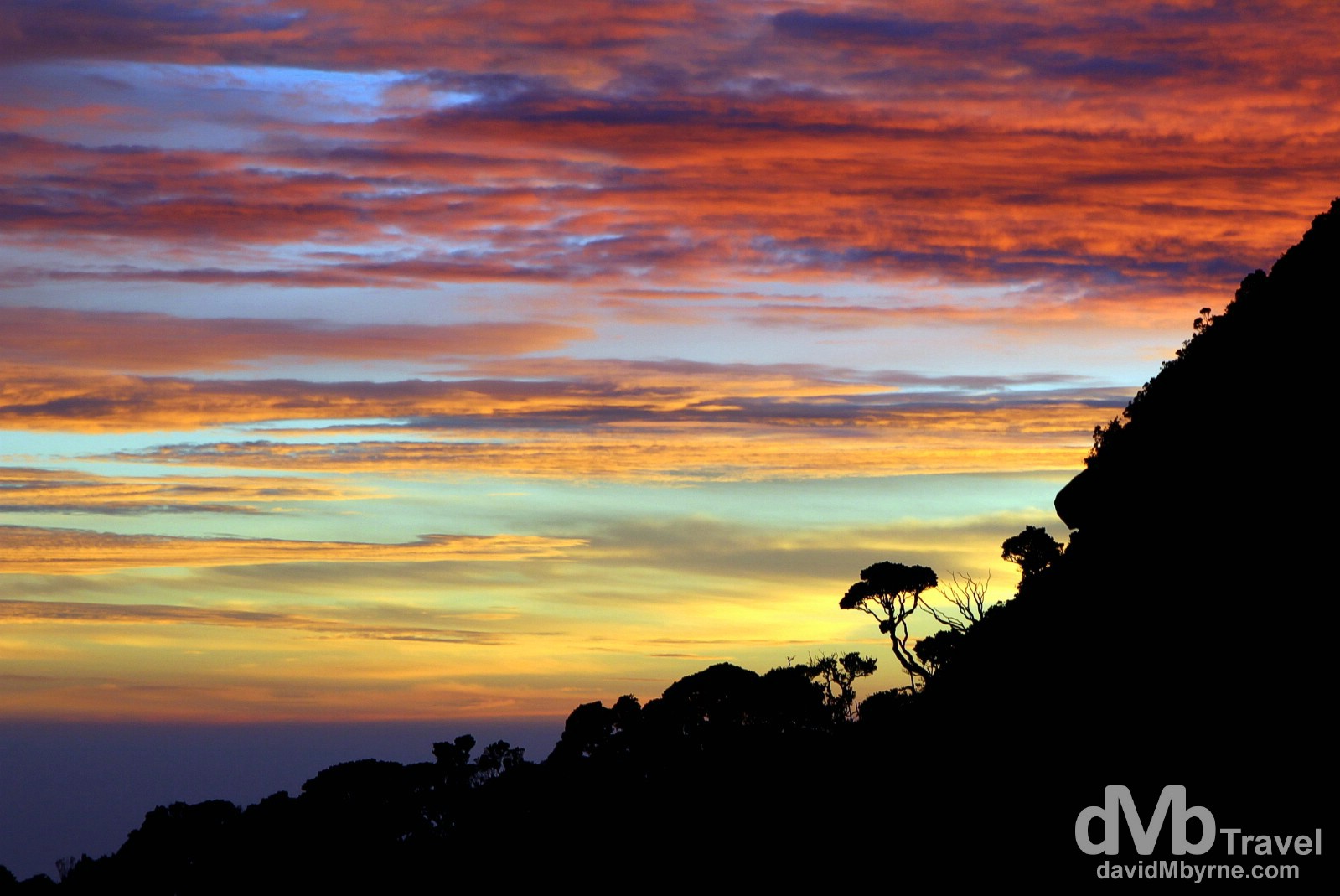 Sunset from the village of Laban Rata high on the slopes of Mount Kinabalu, Sabah, Malaysian Borneo. As it turned out this sunset was a (far) better spectacle than sunrise from the summit the following morning. June 22, 2012.

On day 2, today, I starting walking again – as did seemingly the whole world – at 3 a.m. Yes, stupid o’clock. I reached the summit at 5:20 a.m. The walk from the rest house in Laban Rata to the summit is only 2.75 kilometres, but altitude, complete darkness, a narrow trail & a seemingly endless line of fellow climbers means it can take anywhere from 2 to 4+ hours – the first kilometre this morning, from the 6 to 7 kilometre markers, took me nearly one hour ten minutes. It was a tedious & frustrating part of the climb as the narrow trail forced me to wait behind slower climbers struggling with the task in hand. All that said, I still reached the summit about 40 minutes before the sun showed up. I sat there for those 40 minutes fighting the cold, something that is not much of a problem when walking but once you stop and sit exposed with no sunlight at 4,205 metres then it (rapidly) becomes a problem. I tried to keep busy to take my mind off of the cold by taking a few extended exposure pictures of the scene back along the trail I’d just walked. It somewhat worked but for those 40 minutes or so I’d have happily given up my beloved camera for some warmer clothing. 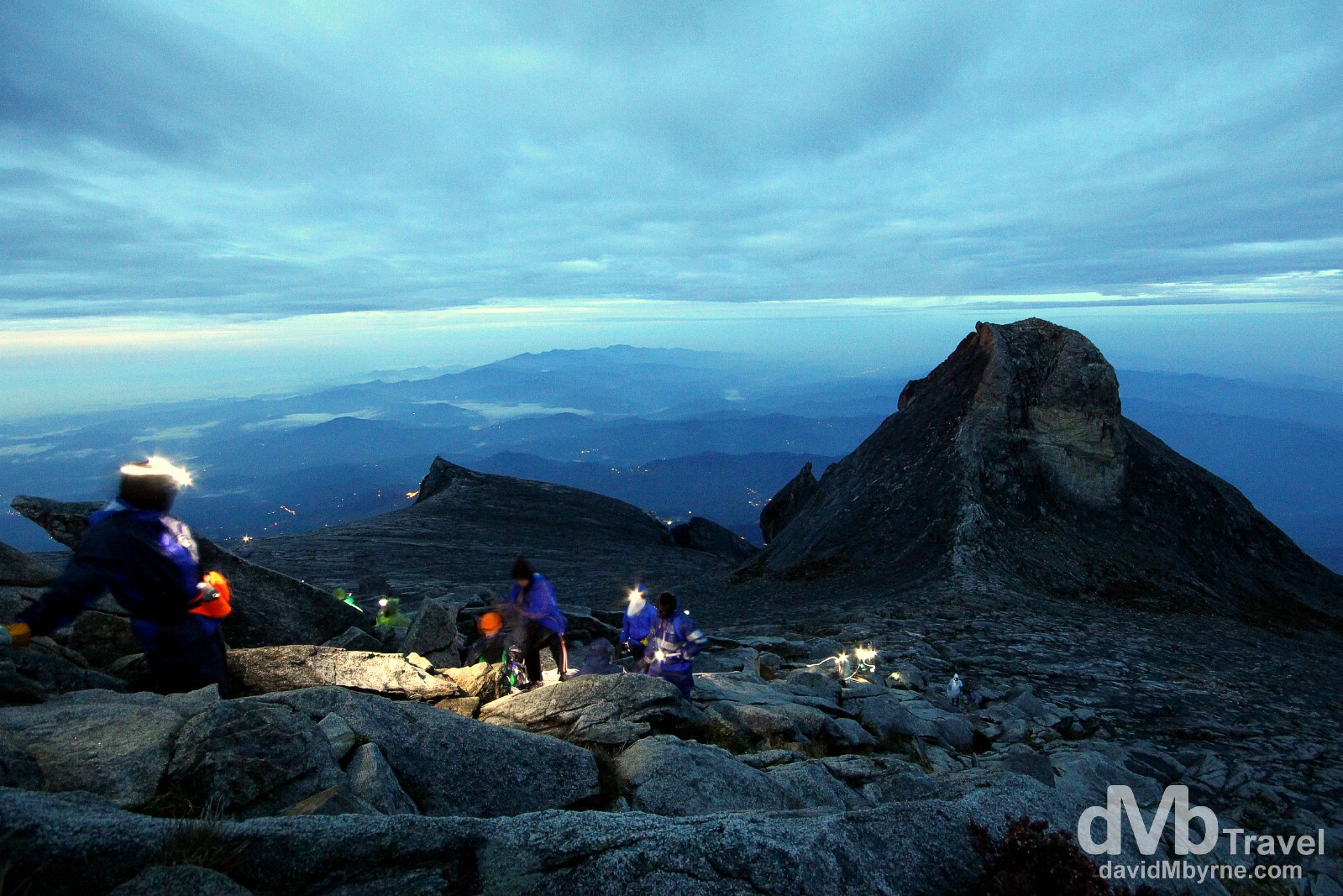 Inaccessible to any but winged animals.

– Sir Hugh Lowe, commenting on the summit of Mount Kinabalu when making the first scent of its summit plateau – although not the summit itself – in 1851. The highest point on Mount Kinabalu was finally reached in 1888 by zoologist John Whitehead, with British botanist Lilian Gibbs becoming the first woman, and the first botanist, to summit in February of 1910.

(Largely Unexplored) Botanical Paradise
Although it’s hard to appreciate standing on the bare granite that marks the mountains upper reaches, Mount Kinabalu and the park it sits in, Kinabalu Park, is actually a botanical paradise, designated a Centre of Plant Diversity as well as a UNESCO-listed heritage site – it was inscribed on the UNESCO World Heritage list in 2000 making it Malaysia’s first entry on the list. The summit overlooks the mysterious abyss of the mile-deep Low’s Gully. Due to its isolation & difficulty to reach, the gully wasn’t explored by man until 1994 & only as recently as 1998 did an expedition return from exploring its depths with several newly discovered species of plants & insects. 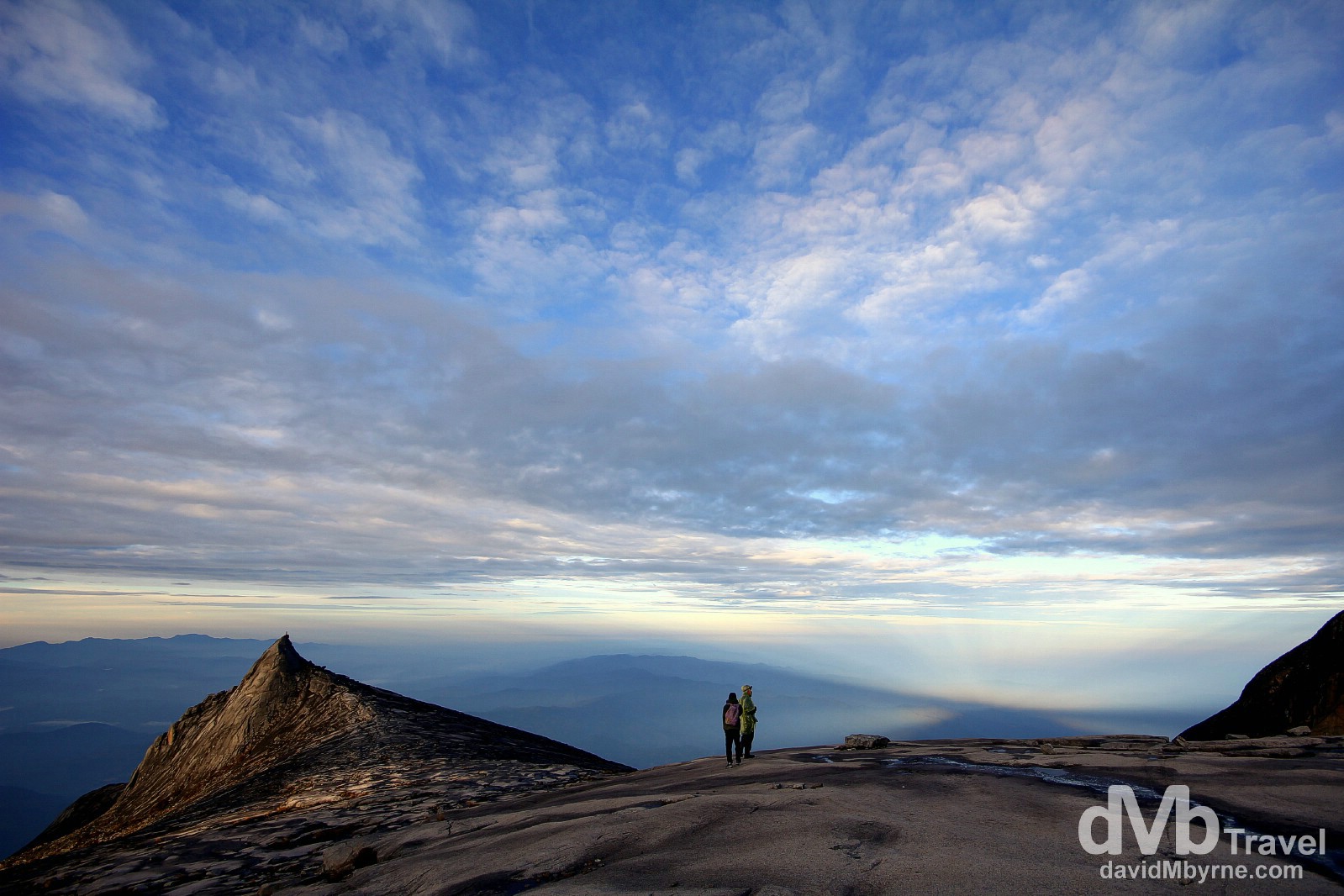 A picture captured on the descent of climbers admiring the post sunrise view over Sabah, Malaysian Borneo, from the granite expanse leading to the summit of Mount Kinabalu. The views of Sabah from this height, stretching out below in all directions, are phenomenal. June 23, 2012.

The Climb
Make no mistake – the 8.75 kilometre climb from the starting point at 1,866 metres (6,122 ft) to the summit at 4,095 metres (13,435 ft) is uphill the whole way; it’s unrelentingly steep & you find yourself either walking up steep rock steps (until about the 7 kilometre mark) or on bare granite (the last 1.75 kilometre), with areas nearing the summit where you need the assistance of ropes to scale wet, slippery granite slops – I can think of better things to be doing in total darkness, bitter cold & light rain at 04:00. Oh, and don’t forget that once you get to the summit – if you get to the summit; people don’t but you should if you have even a modicum of fitness and just a little more stamina – then you have to turn around and retrace your steps back to the starting point, completing the 17.5 kilometre ordeal (needless to say the decent, & depending on how your legs feel, should be easier & quicker than the ascent). For the record my total climbing time for the 17.5 kilometre round-trip trek was 8 hours 40 minutes – 5 hours 40 minutes to ascend & 3 hours to descend. That’s a good time, a very good time in truth, but is nothing compared to the record of a little over 2 hours 40 minutes. That’s the current time, as of June 2012, to beat in what is dubbed the World’s Toughest Mountain Race (1 hour 40 minutes up & 1 hour down). Walking is taxing enough so it’s hard to believe anyone would be physically capable of clocking a sub-3 hour time in running up & down Mount Kinabalu. Kudos indeed, but not much time to enjoy those oh-so stunning vistas.