As the capital of Japan for more than a thousand years, Kyoto conjures up the classic images of Japan: narrow lanes of traditional wooden teahouses; Geisha in a flourish of brightly coloured silks; and the inevitable weeping cherry tree surrounding idyllic temples. It’s not to say you cannot see such sights in present-day Kyoto (you can) but it’s fair to say there are very few genuine fairytale scenes like that in modern Japan. But nonetheless, UNESCO World Heritage-listed Kyoto, one of the oldest and most famous metropolises in all of Asia, is endowed with an almost overwhelming legacy of ancient Buddhist temples & Shinto Shrines (over 1600 of them in the city alone), majestic palaces, traditional Japanese gardens, and gorgeous teahouses. I’ve been fortunate enough to visit Kyoto on two very different occasions: in summer 2005 & in autumn/Fall 2007. What follows is a pictorial look at the highlight of both visits.

Built in A.D. 794 on the model of the capitals of ancient China, Kyoto was the imperial capital of Japan from its foundation until the middle of the 19th century. As the centre of Japanese culture for more than 1,000 years, Kyoto illustrates the development of Japanese wooden architecture, particularly religious architecture, and the art of Japanese gardens, which has influenced landscape gardening the world over.

– UNESCO commenting on the Historic Monuments of Ancient Kyoto 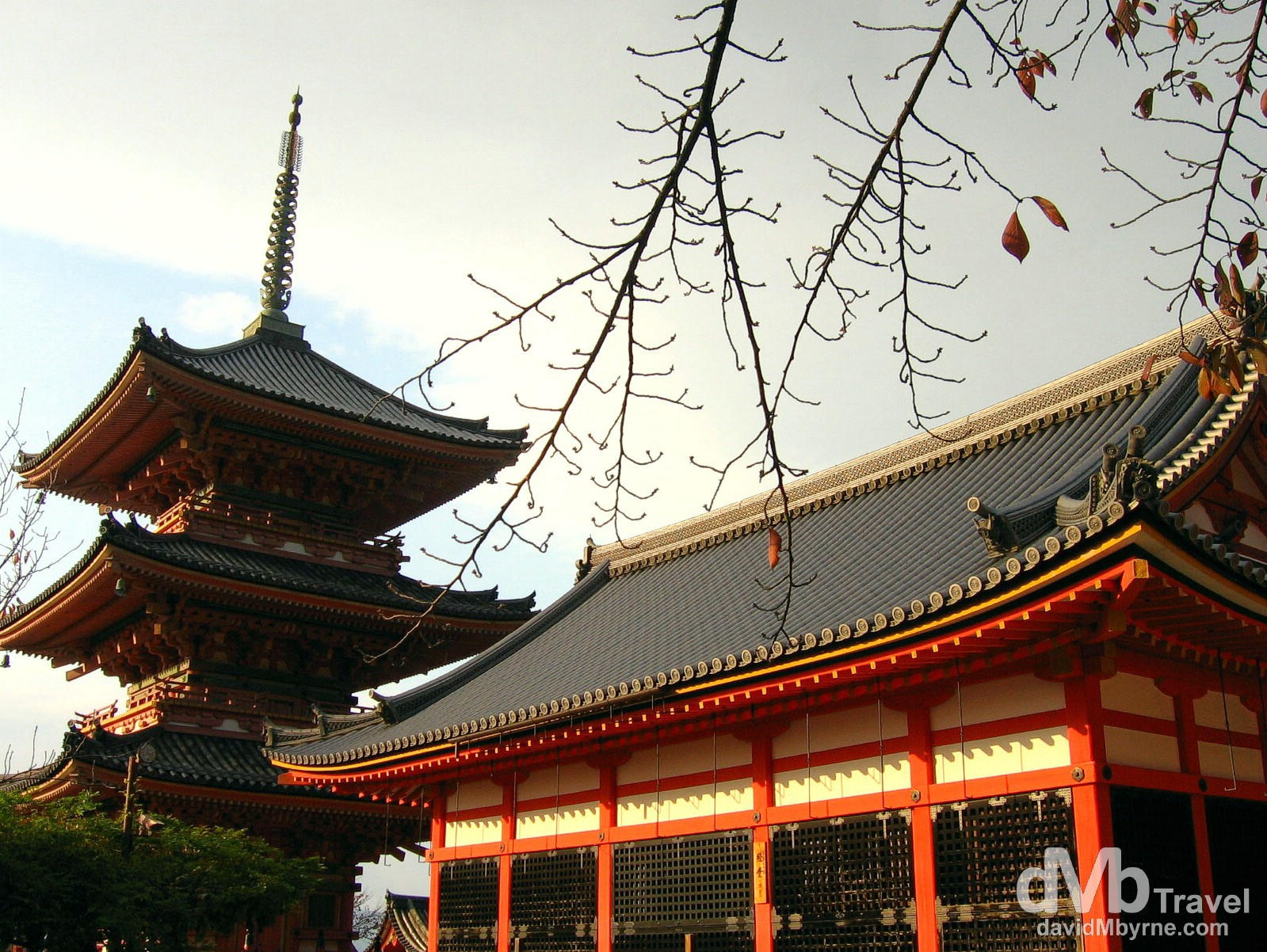 The three-storied pagoda in the grounds of the Kiyomizu-dera Temple, Higashiyama-ku, Kyoto (

Top priority should go to the eastern, Higashiyama-ku district where you can walk north from the famous Kiyomizu-dera Temple to Ginkaku-ji, the Silver Pavilion, taking in a whole raft of interesting temples, gardens, shrines and museums on the way.

– The Rough Guide to Japan

The Kiyomizu-dera (Pure Water) Temple is the most visited temple in Kyoto and one of the most celebrated temples in Japan. It was founded in 798 with the present structure dating to 1633 & still remains associated with the Hosso sect, one of the oldest sects within Japanese Buddhism. It was inscribed on the UNESCO World Heritage list in 1994 as part of the Historic Monuments of Ancient Kyoto & was one of the 21 finalist in 2007 for inclusion on the list of the New7Wonders of the World. 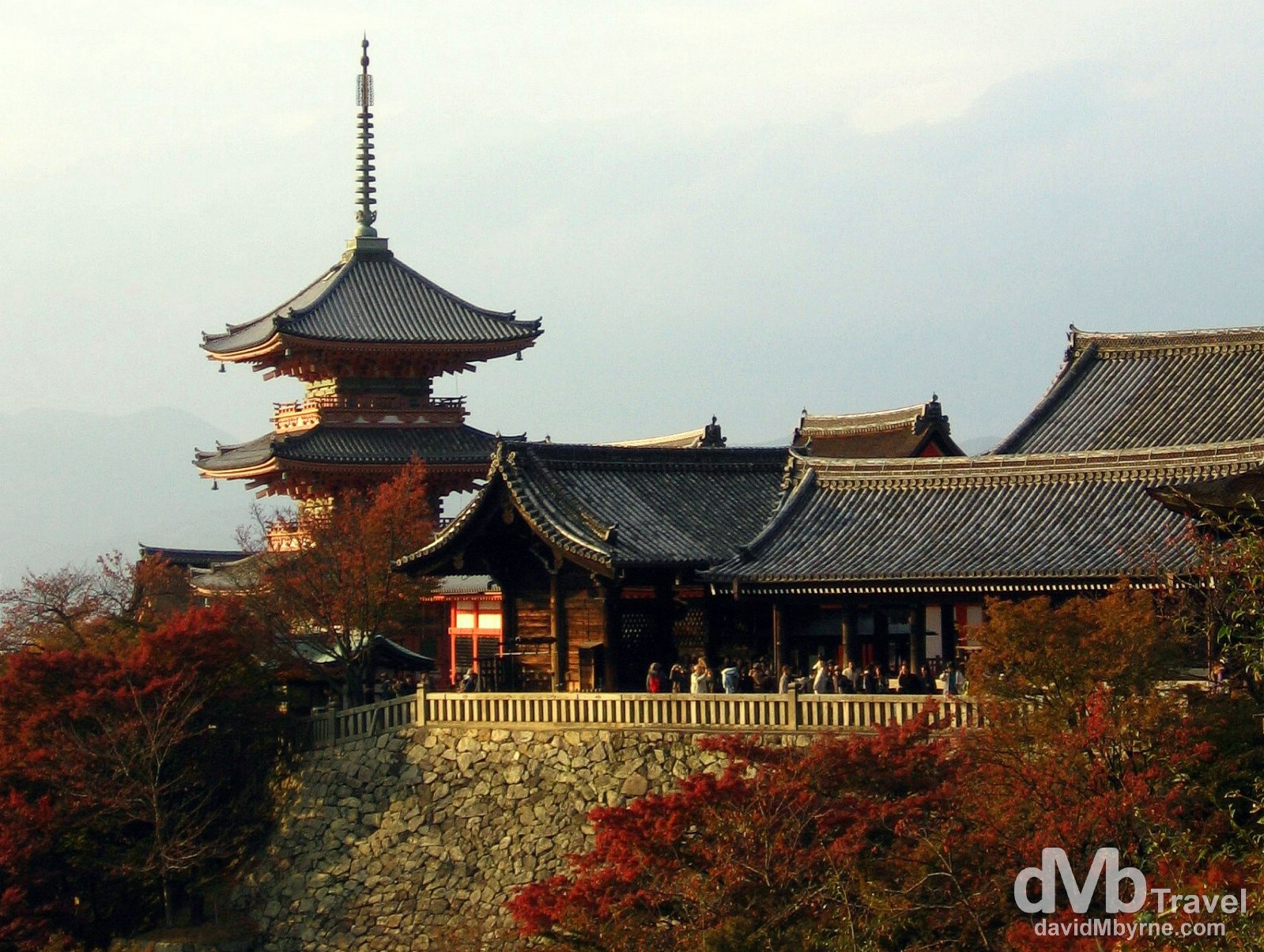 The Kiyomizu-dera (Pure Water) Temple stands in the wooded hills of eastern Kyoto and offers visitors a nice view over the city from the famous wooden terrace of the Hondo, the temple’s main hall, part of which can be seen in this picture. The Hondo was built in 1633 and is an example of kake-zukuri, or overhang architecture. It’s famous for its so-called Kiyomizu-dera stage, an imposing veranda supported below by a forest of tall wooden columns. Below the terrace you can taste the spring water, which gives the temple its name and which is said to have healing power. This is an especially popular place to visit in the spring when the surrounding hills are alive with cherry blossoms in bloom, with autumn a close second. Kiyomizu-dera (Pure Water) Temple, Higashiyama-ku, Kyoto, Japan. November 20, 2007.

Ginkaku-ji || Temple of the Silver Pavilion 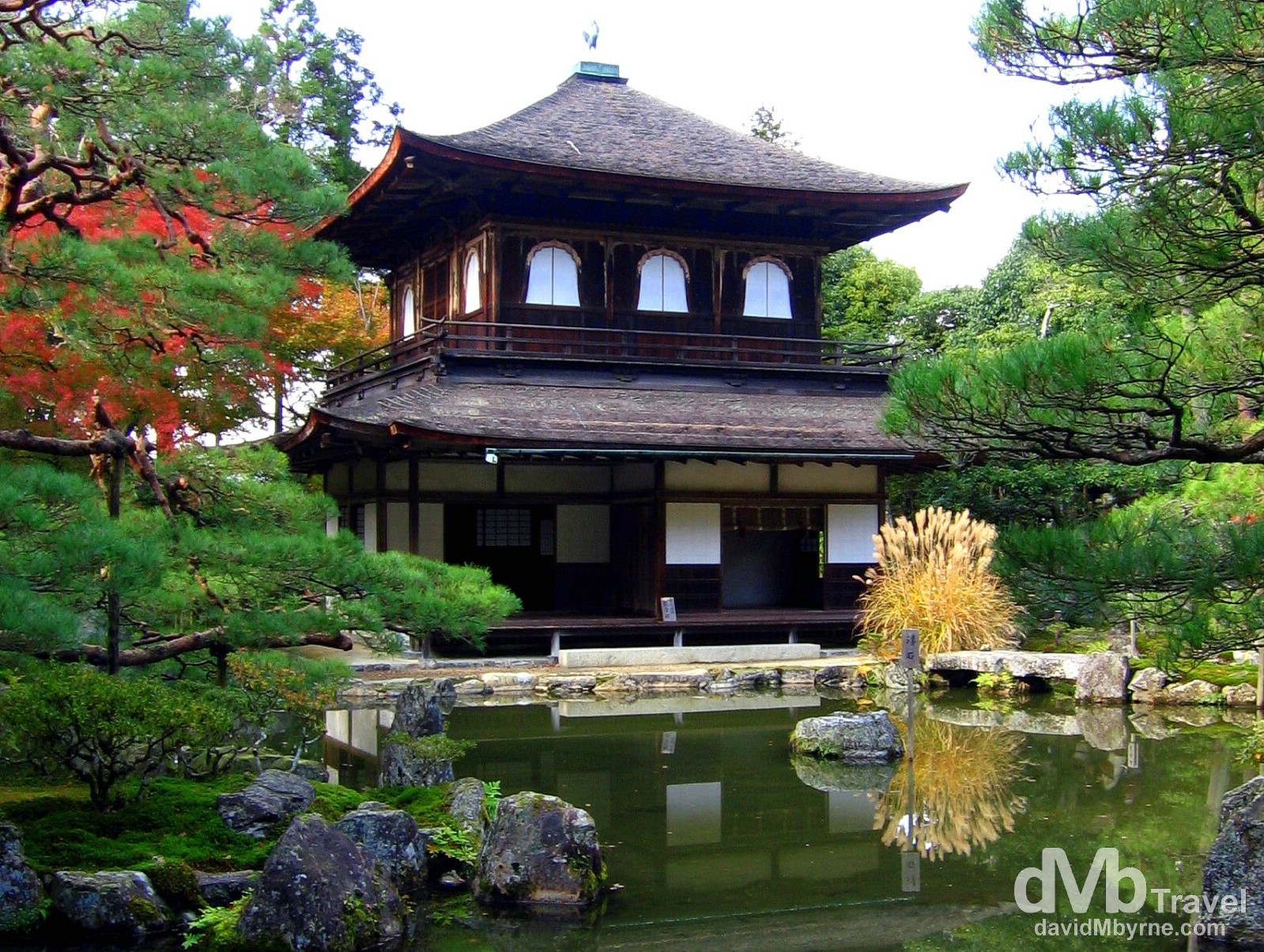 The Buddhist Ginkaku-ji, the Temple of the Silver Pavilion, is a temple complex featuring wooded grounds (including bamboo thickets) covered with a variety of mosses and an impeccably manicured garden. In the centre of all that you’ll find this structure, The Silver Pavilion, so-called because of the intention to cover it in silver when it was built in 1489. It was built by the Shogun (military dictator who ruled Japan) of the time, Ashikaga Yoshimasa, to serve as a place of rest and solitude. In accordance to his will, it became a Buddhist temple shortly after Yoshimasa’s death and was inscribed on the UNESCO World Heritage list in 1994 as part of the Historic Monuments of Ancient Kyoto. 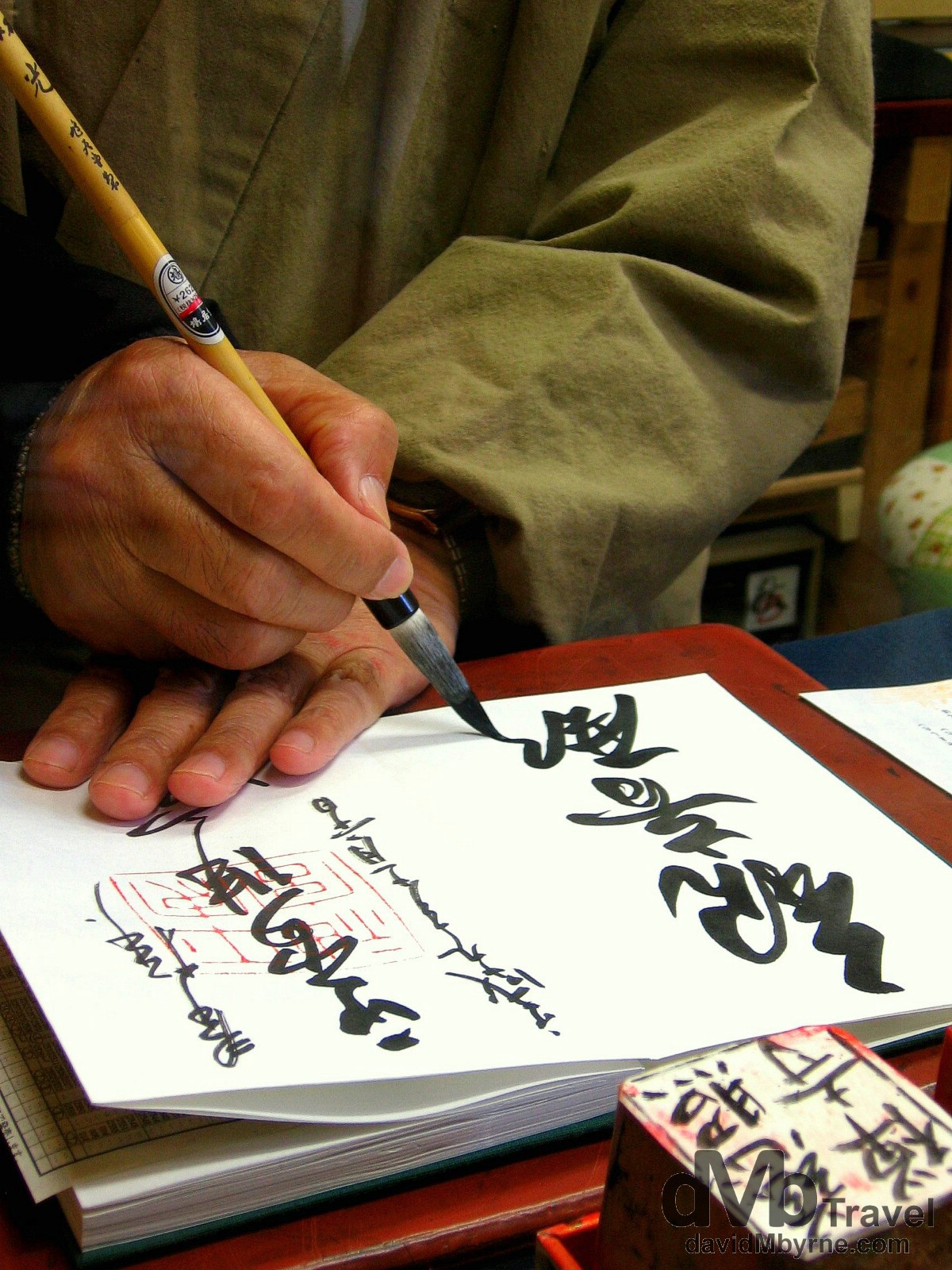 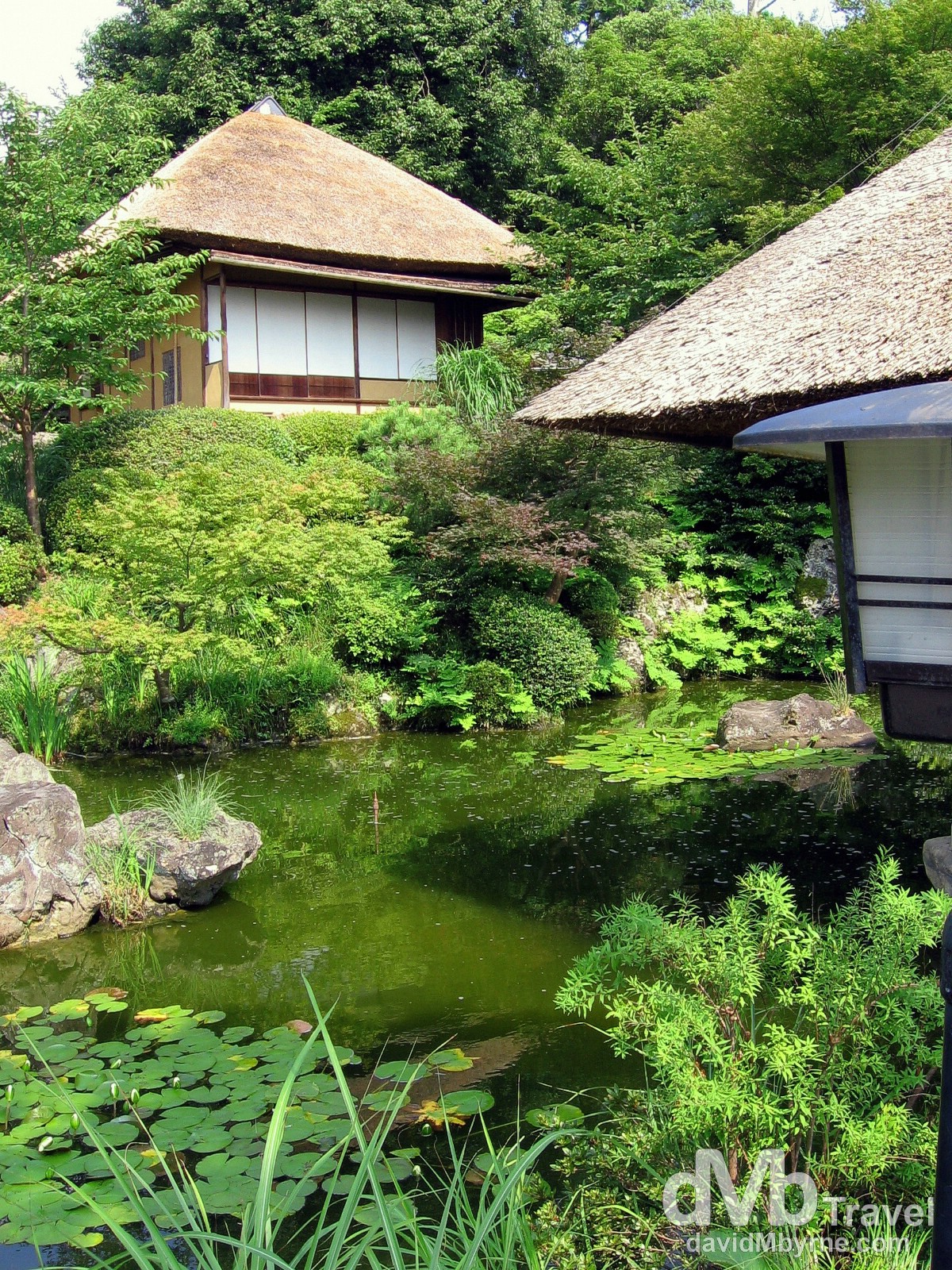 Teahouses, called O-chaya, in traditional Japanese gardens off Sannen-zaka lane in the Higashiyama district of Kyoto. Tea was introduced to Japan from China in the 9th century. However, tea drinking didn’t really catch on until after the 12th century. It was particularly popular among Zen Buddhists who appreciated the tea’s caffeine kick during their long mediation sessions. Zen Buddhists believe that all actions have a religious significance and the very act of tea drinking gradually evolved into part of the meditation process. The highly ritualistic tea ceremony performed by Geisha, called rha-no-yu, didn’t develop until the late 16th century under a gifted tea master and garden designer called Sen no Rikyii (1521-1591). Influenced by the culture of the samurai, the most important aspect of the tea ceremony is the etiquette with which it is performed. Central to this is the selfless manner in which the host serves the tea and the humble manner in which the guests accept it. Indeed, the inner spirit of the participants during the ceremony is considered more important than its ritual form. Guests are expected to notice the hanging scroll and flower management decorating the tea room, and the cup from which they drink – all are valued for the skill of the craftsmen and their seasonal note or rustic simplicity. Today the tea ceremony is popular mostly among young women; indeed tea ceremony etiquette is deemed a desirable quality for a woman of marriageable age to acquire. Higashiyama-Ku, Kyoto, Honshu, Japan. July 18, 2005. 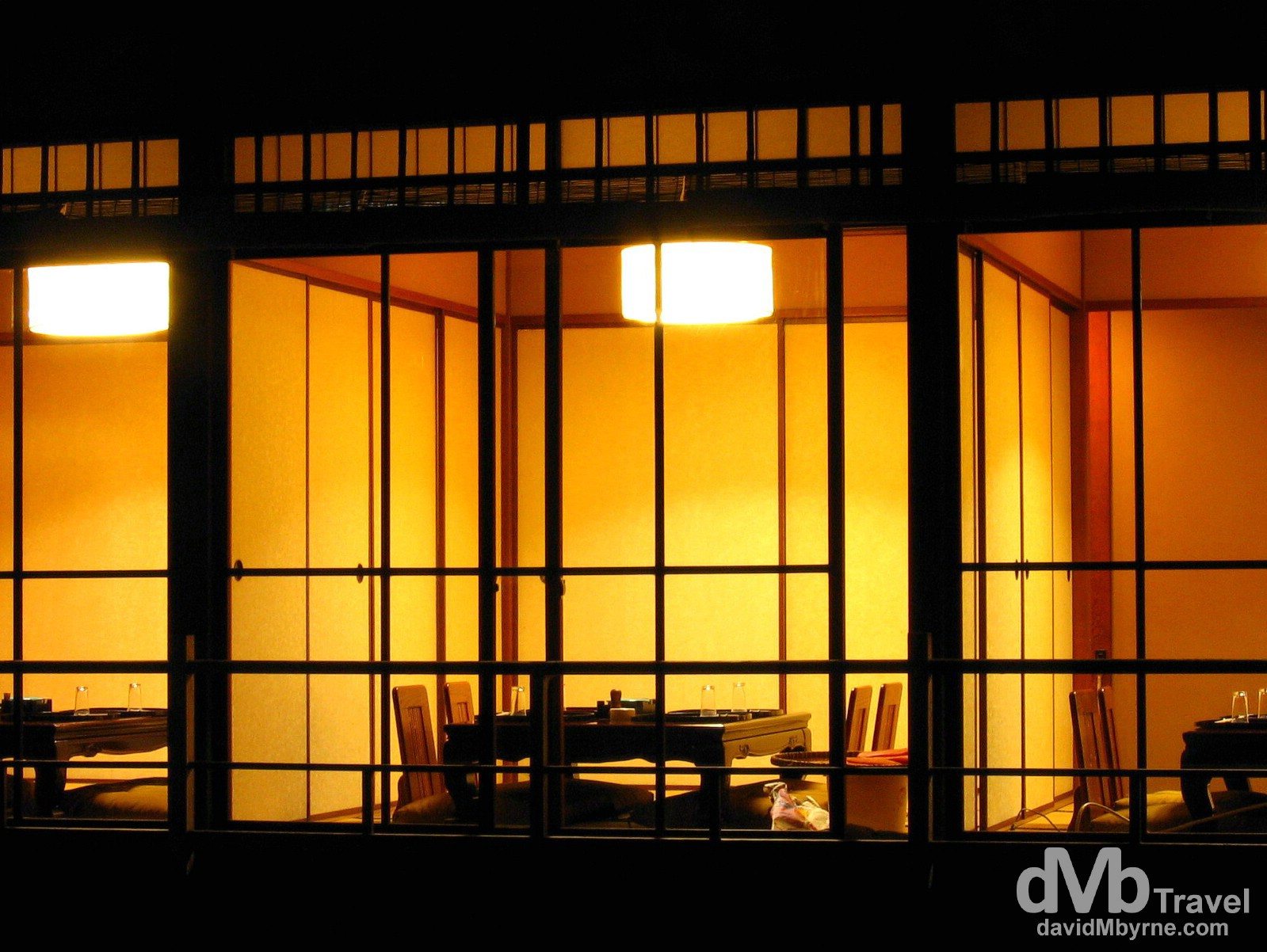 Kyoto’s delights can be sampled any time of year but I arrived in the city on my first, 2005 visit to the city during not only Kyoto’s but Japan’s biggest festival, Gion Matsuri. The annual festival, which sees downtown Kyoto closed off for pedestrian traffic only, spans the entire month of July but it is crowned by a huge parade, the Yama-boko Junko, on July 17, the day I arrived in the city from Nikko. The parade of massively decorated yamaboko floats, inhabited by Geisha and other traditional Japanese artists, parade down Kyoto’s main street, Shijo-dori (Fourth Avenue). It’s quite the sight. 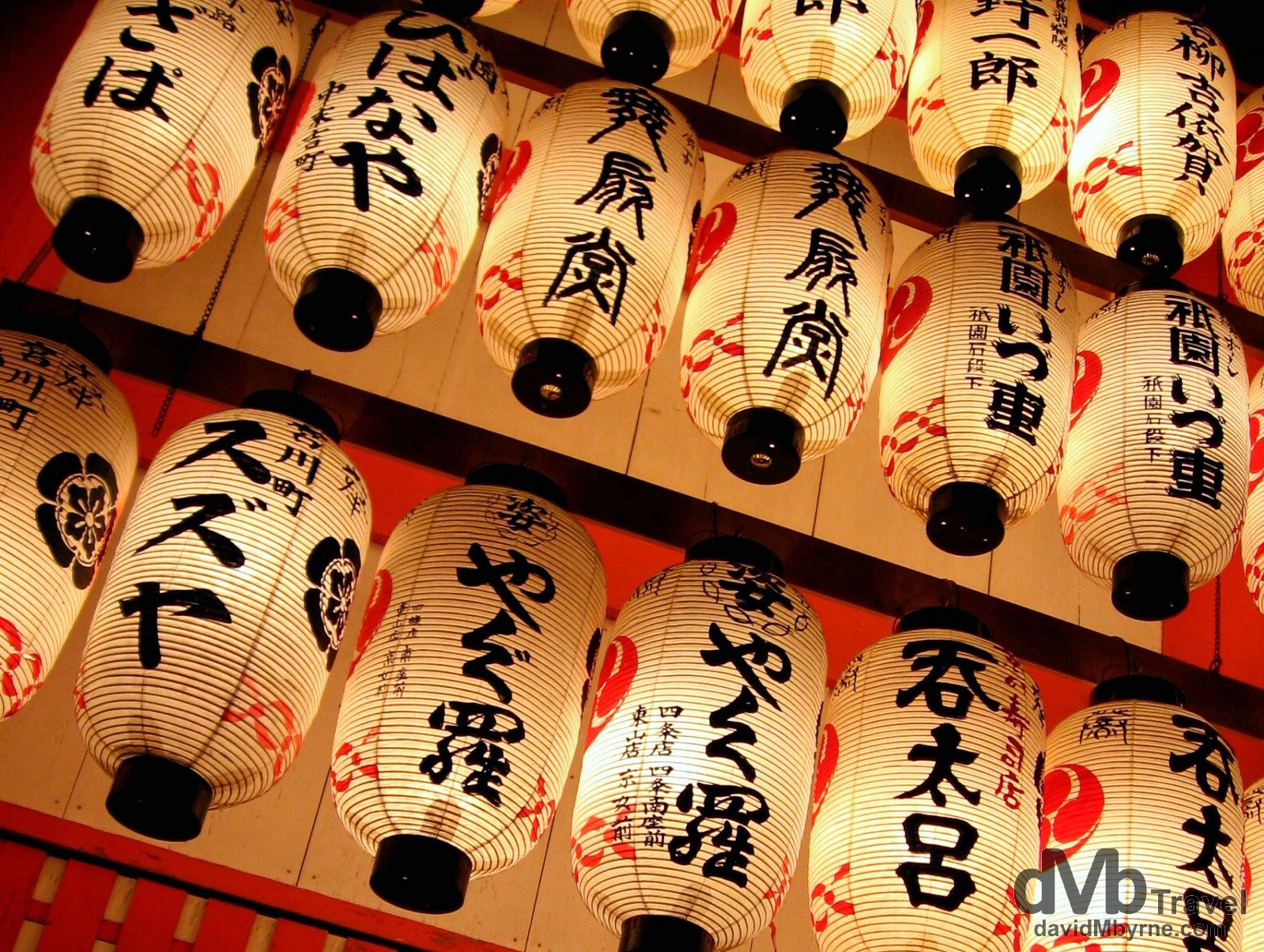 Lanterns adorn the stage of the Yasaka Jinja Shrine on the night of the Gion Matsuri festival. The shrine, once called the Gion Shrine, is a Shinto shrine in the Gion District of the city. Situated at the east end of Kyoto’s main street, Shijo-dori (Fourth Avenue), it was built originally in 656. The shrine includes several buildings including gates, a main hall and the aforementioned stage. In 869 the mikoshi (portable shrines) of the Yasaka Jinja were paraded through the streets of Kyoto to ward off an epidemic that had hit the city. This was the beginning of the annual festival, Gion Matsuri. Today, & in addition to hosting the Gion Matsuri, the Yasaka Shrine welcomes thousands of people, especially every New Year for traditional Japanese New Year rituals and in April when crowds pass through the temple on their way to the nearby Maruyama Park, a popular cherry blossom viewing site. Yasaka Jinja Shrine, Kyoto, Honshu, Japan. July 17, 2005. 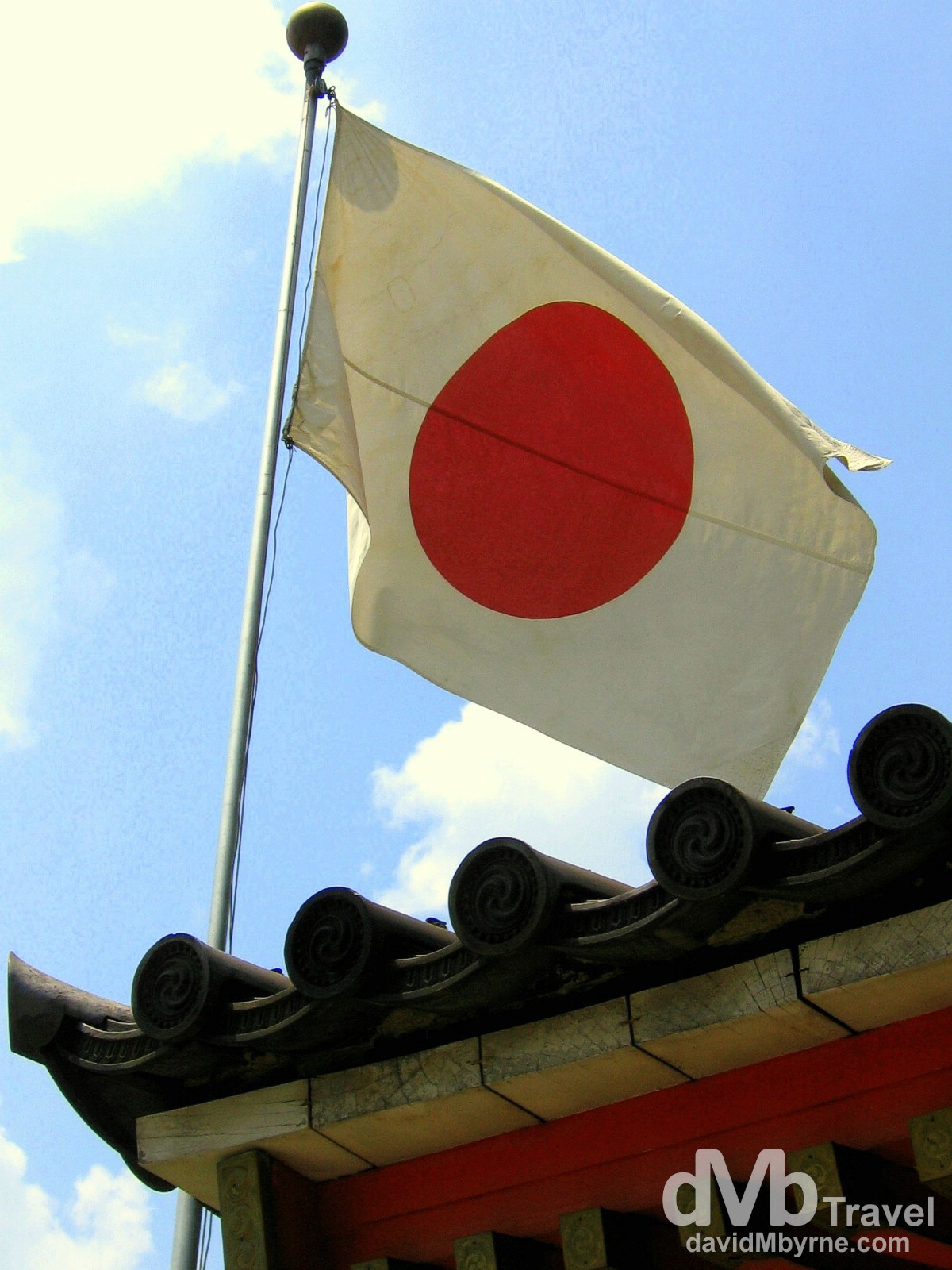 The Japanese flag flies over the entrance to the Yasaka Jinja Shrine in Kyoto. The distinctive national flag of Japan consists of a white banner with a red circle in the center, which represents the sun. The flag is called Hinomaru, which means ‘circle of the sun.’ In English it is sometimes called the ‘rising sun.’ It has been used for over a thousand years and no one knows who designed it or when. It was officially adopted as the flag of Imperial Japan on January 27, 1870. Yasaka Jinja Shrine, Kyoto, Honshu, Japan. July 18, 2005. 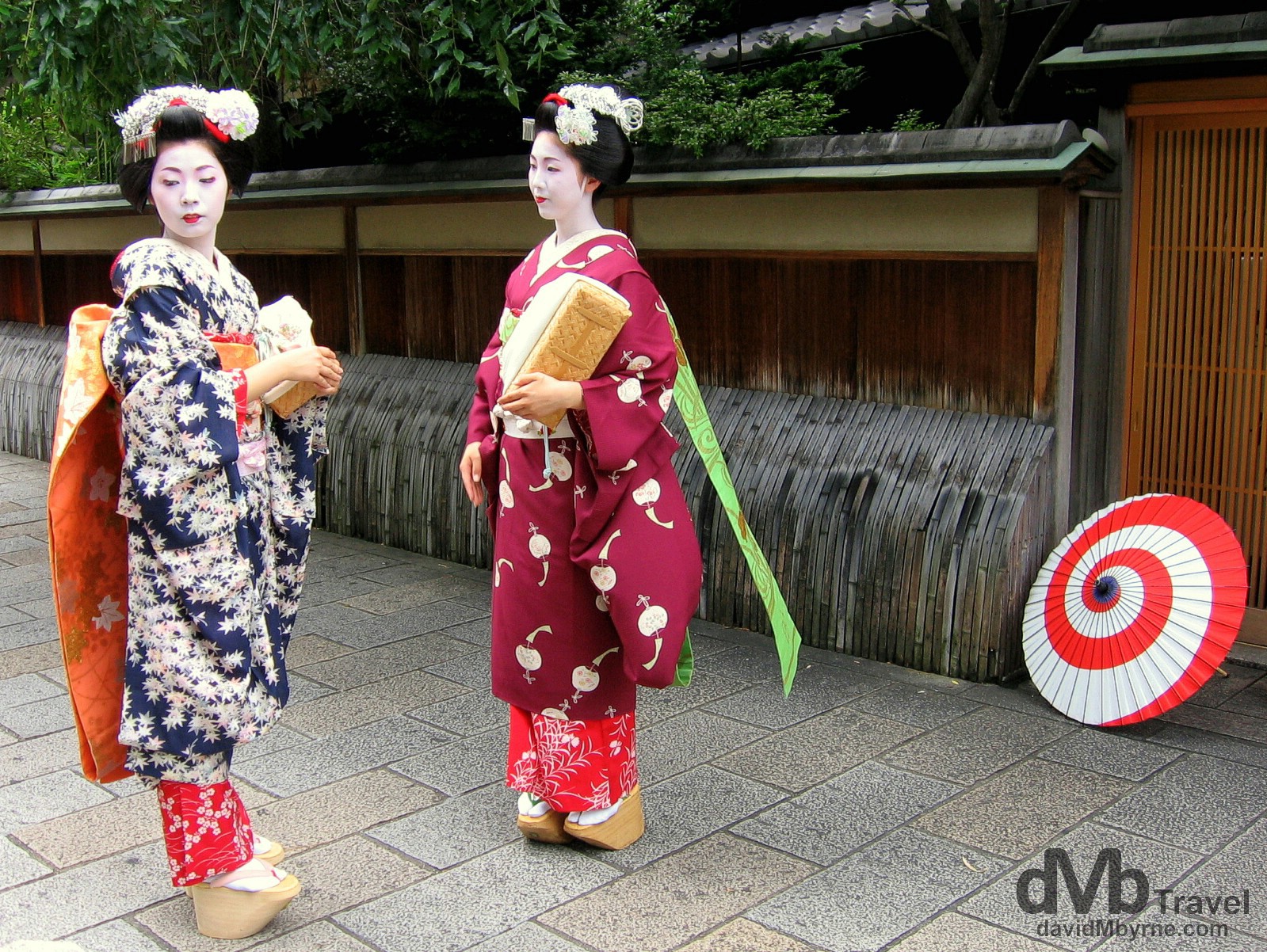 Maiko, trainee Geisha, on the streets of the Gion district of Kyoto. Geisha, meaning artist in Japanese, are professional hostesses who entertain guests through various performing arts in traditional Japanese teahouses, called O-chaya. They are trained in a number of traditional skills such as Japanese ancient dance, singing, playing instruments (such as the traditional shamisen), flower arrangement, wearing kimono, tea ceremony etiquette, calligraphy, conversation, alcohol serving manners and more. Geisha continue to study and perfect these skills throughout their careers & at all times must demonstrate beauty, grace, artistic talent, charm, impeccable etiquette, and refinement. Only guests with a longtime connection to a particular teahouse are allowed to be entertained by Geisha & teahouses generally don’t take on new clients without an introduction. The profession of a Geisha is a very expensive business and a Geisha party can easily cost thousands of US dollars. The total number of Geisha in the 1920s totalled some 80,000 but today the number of Geisha has dropped to approximately 10,000 due to the westernizing of Japanese culture. Maikos, typically 15-20 year old girls, accompany Geisha on her appointments to learn and become accustomed to the job & it’s usually by the age of 20 that a Maiko girl decides if she is going to stay with the profession & attempt to become a Geisha – if she gets married she must quit. On the streets of Gion, Kyoto, Honshu, Japan. July 18, 2005. 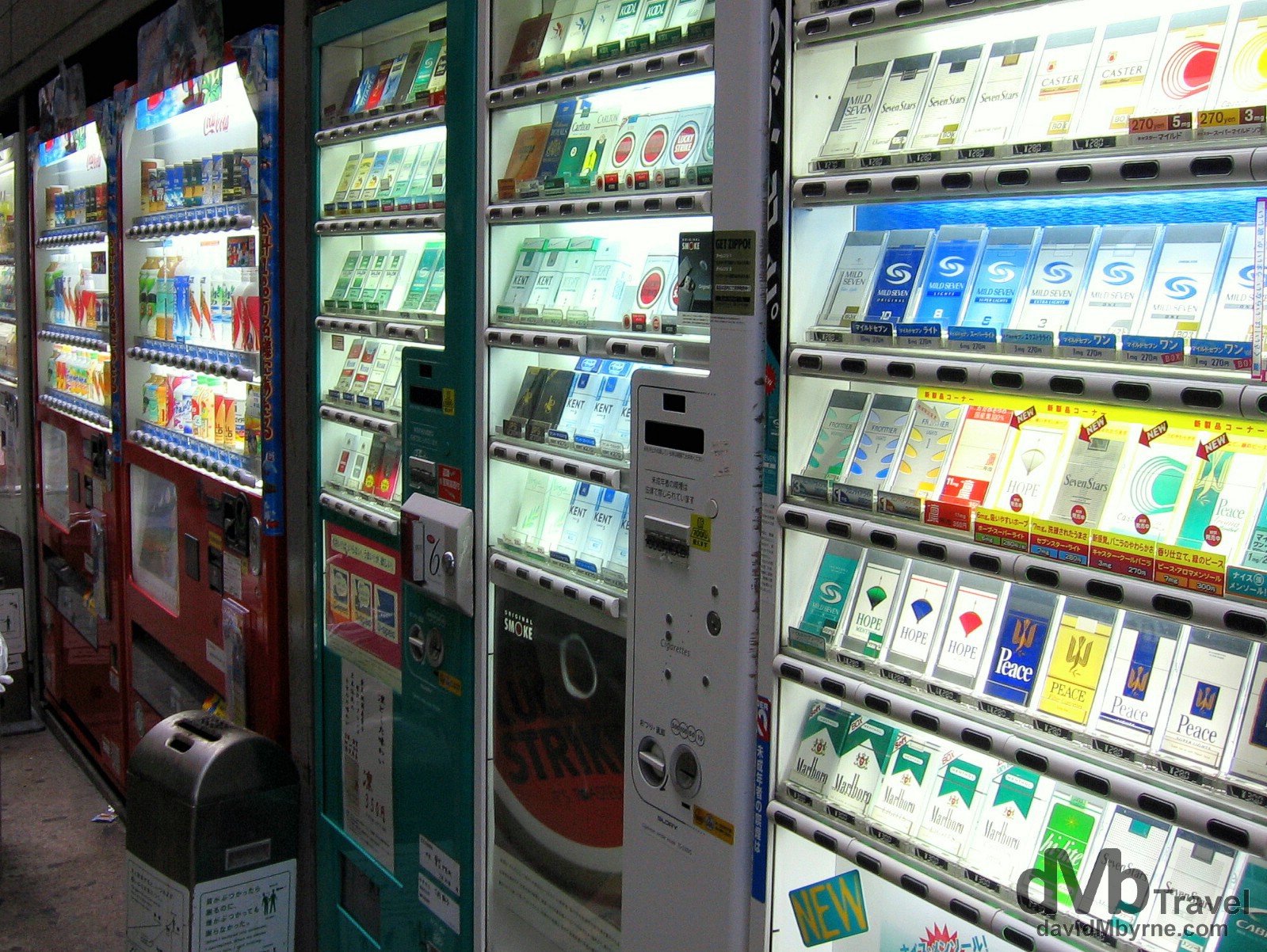 A bank of vending machines in downtown Kyoto. Vending machines are legion all over Japan, a nation who bring the meaning of the word convenience to another level. In such a rushed nation, they – the vending machines – can be seen on virtually every street corner providing ready access to not only anything you might need but also anything you thought you’d never need. The majority of the machines dispense cigarettes and drinks, including beer with the beer vending machines timed to shut down at the same time as licensed premises. Kyoto, Honshu, Japan. July 18, 2005. 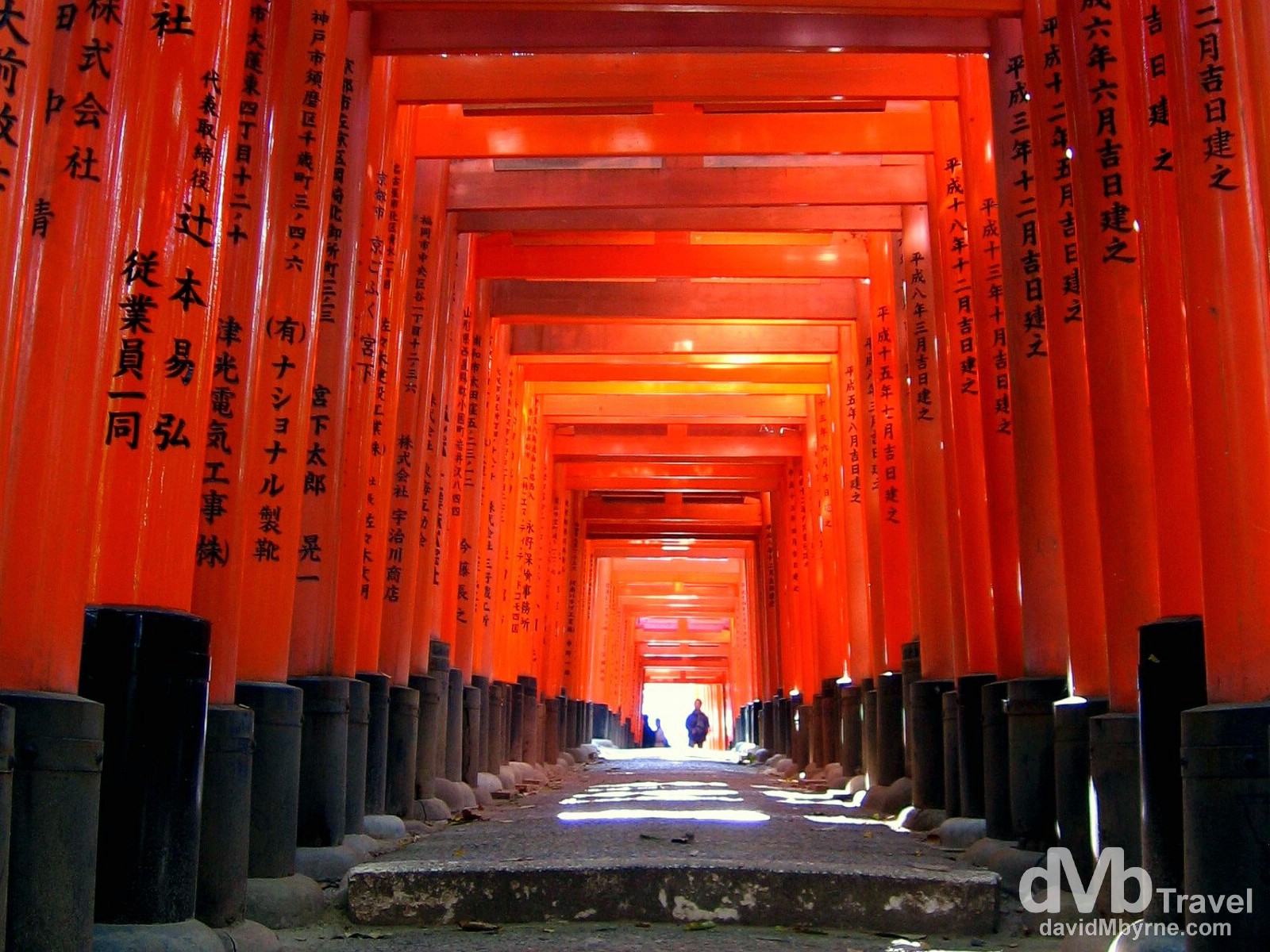 Made famous by the 2005 movie adaptation of the 1997 Arthur Golden novel Memoirs of a Geisha, the torii – a traditional & typically vermilion coloured Japanese gate with two uprights & two crossbars commonly found at the entry to a Shinto shrine – covered trails of the Fushimi Inari Taisha shrine is one of Kyoto’s most photogenic sites. The shrine is the head shrine of Inari, the Japanese kami (spirits within objects in the Shinto faith) of fertility, rice, agriculture, foxes, industry, and worldly success. It sits at the base of a mountain, also named Inari, with the torii gate covered trails leading up the mountain to many smaller shrines. Fushimi, Kyoto, Japan. November 21, 2007.