I‘m sitting in the Nordur-Vik Youth Hostel in Vík í Mýrdal, southern Iceland, the island republic on the volcanic island of Iceland in the North Atlantic near the Arctic Circle. It’s cozy in here but it’s cold outside – although not too cold – & it’s snowing heavily. Tonight will be my sixth & last night in this wondrous little corner of the world. This time tomorrow I’ll be in London, England, no doubt reminiscing on the week I’ll have just spent in Iceland.

The last 6 days have been nothing short of amazing. I kind of knew they would be, even though I’d readily admit to not knowing what to expect from a trip to Iceland in December – safe to say Iceland is a destination that’s not exactly on the backpacking trail and the country is on very few trails of any kind this time of year. All that said, I did expect my time here to be memorable. I also expected my time here, 5 hours of light a day aside, to be a photographic treat. It was, on both counts. I spent the first 3 nights in the capital Reykjavik, a quaint city with a real small-town feel, & the last 3 touring the south coast, an year-round accessible area with more than a few things – waterfalls, glaciers, icebergs, desolate volcanic wasteland & hills/mountains covered in snow – to point a camera at. Here’s a photographic look at a few quite amazing days of travel in southern Iceland. 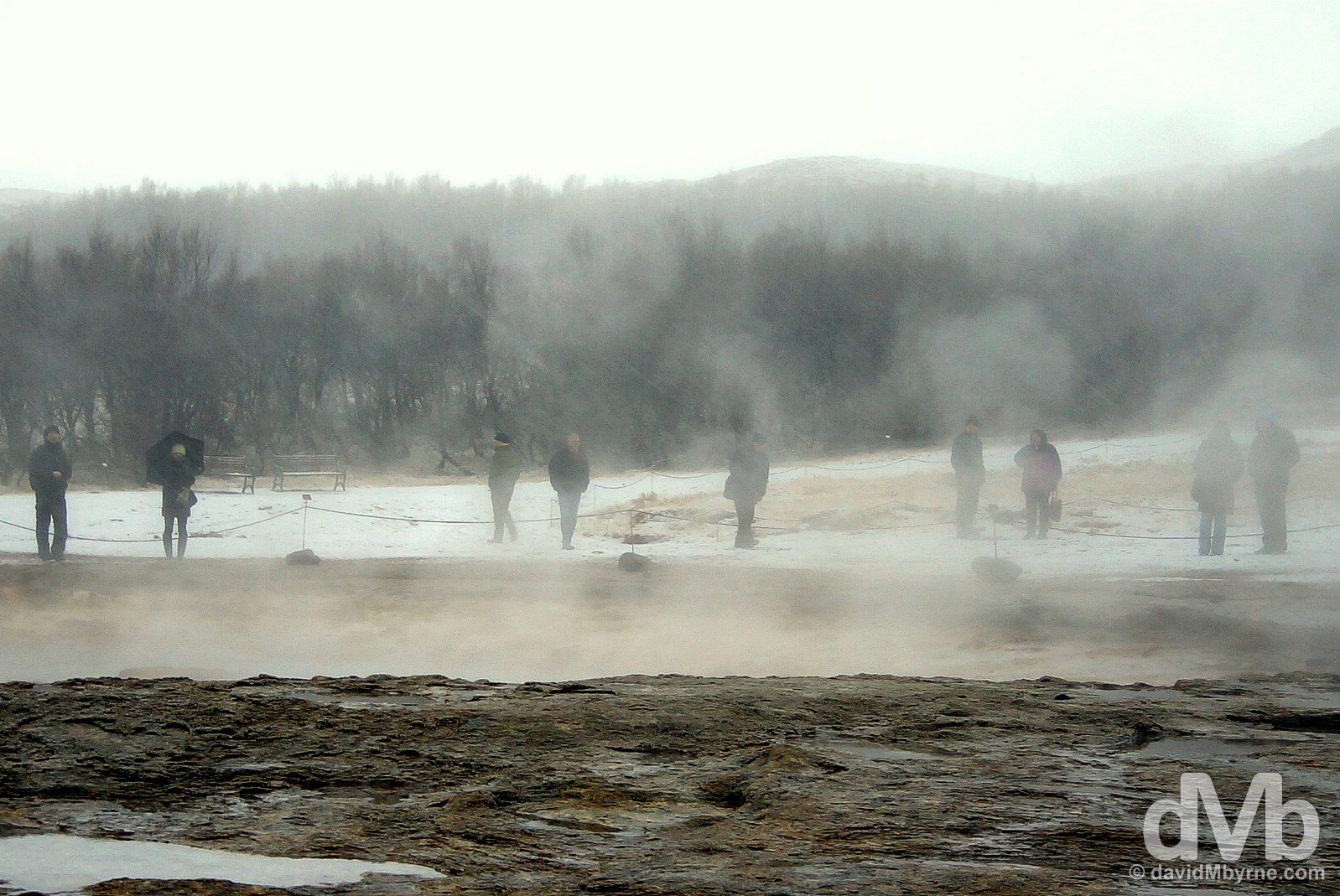 Standing by the Strokkur Geyser waiting for it to erupt (which it does so every 8-10 minutes) in the Haukadalur geothermal area, Iceland. December 3, 2012.

The problem with driving around Iceland is that you’re basically confronted by a new soul-enriching, breath-taking, life-affirming natural sight every five goddamn minutes. It’s totally exhausting. 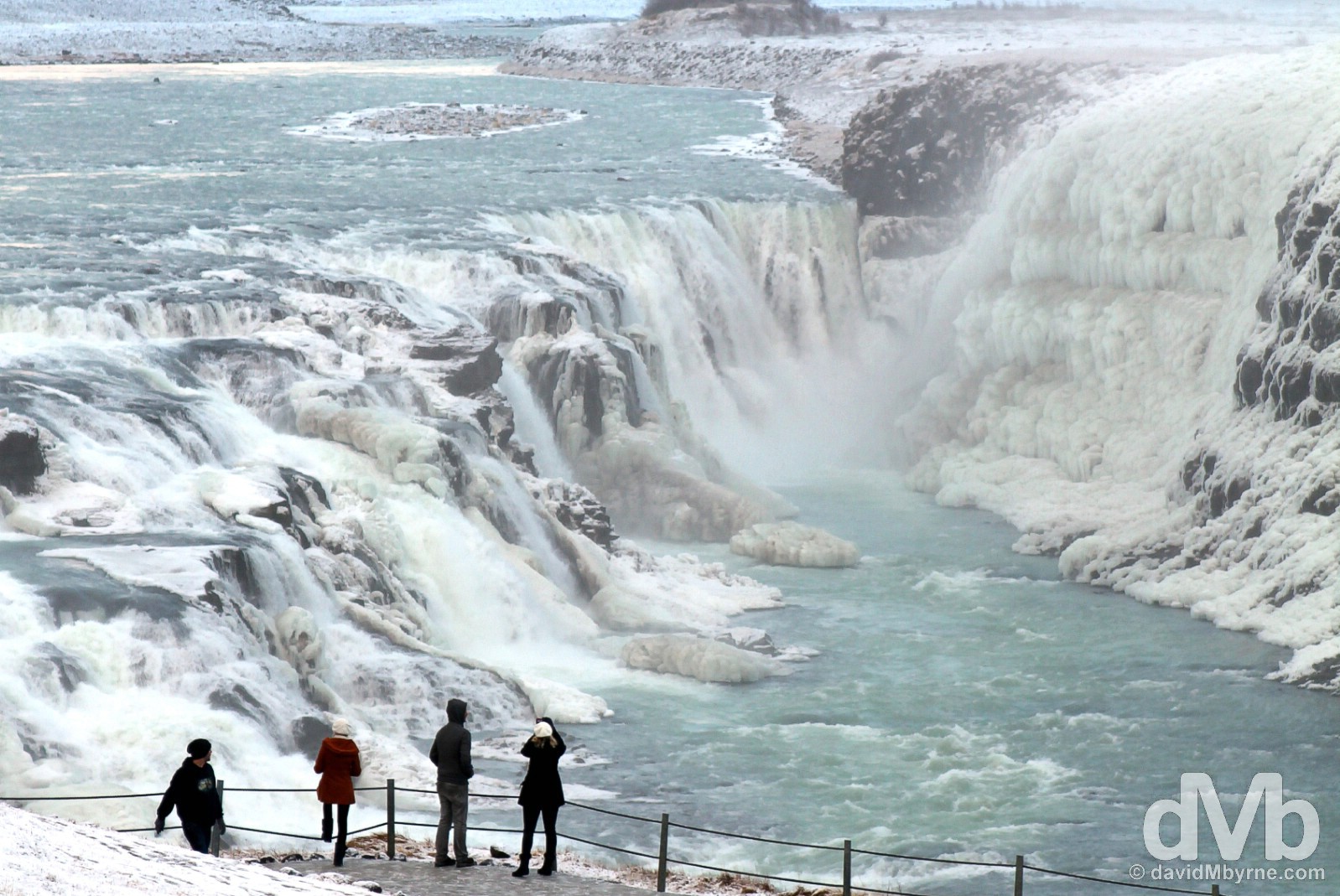 Large & powerful waterfalls are legion in Iceland, the result of a north Atlantic climate & a near-Arctic location – the former produces frequent precipitation & the latter large glaciers, both of which feed many rivers. Travelling around the country means you’re never too far from a waterfall, three of which I got to visit during my time here (although not Dettifoss, aka the Prometheus waterfall, reputedly the most powerful in Europe… it’s up north in Vatnajökull National Park & I’ll get to that next time). Its proximity to the capital Reykjavik makes this, Gullfoss (Golden Falls), Iceland’s most famous & most visited waterfall. The majority visit it as part of a Golden Circle tour, a popular 300 kilometre tourist route looping from the capital into central Iceland and back. The falls, fed by the Hvítá River, are a double cascade dropping 32 metres in two stages (11 metres and 21 metres) & into a crevice 32 metres (105 feet) deep, 20 metres (60 feet) wide and 2.5 kilometres in length. It’s quite the sight.

Don’t Like The Weather?
Icelanders have a saying that if you don’t like the weather then stick around for 5 minutes. Very true. When I arrived here the whole area was shrouded in a heavy white mist. Not much was visible & all I could hear through the haze was the thunderous rumble of the water (although I still felt obliged to fire off a few shots of that misty nothingness). I was giving up hope of seeing anything when the mist started to break. The above picture was captured on the steps leading away from one of the many falls viewing areas. A few minutes later and I probably wouldn’t have had a picture of the falls at all, even a bad one. Stick around for 5 minutes indeed. 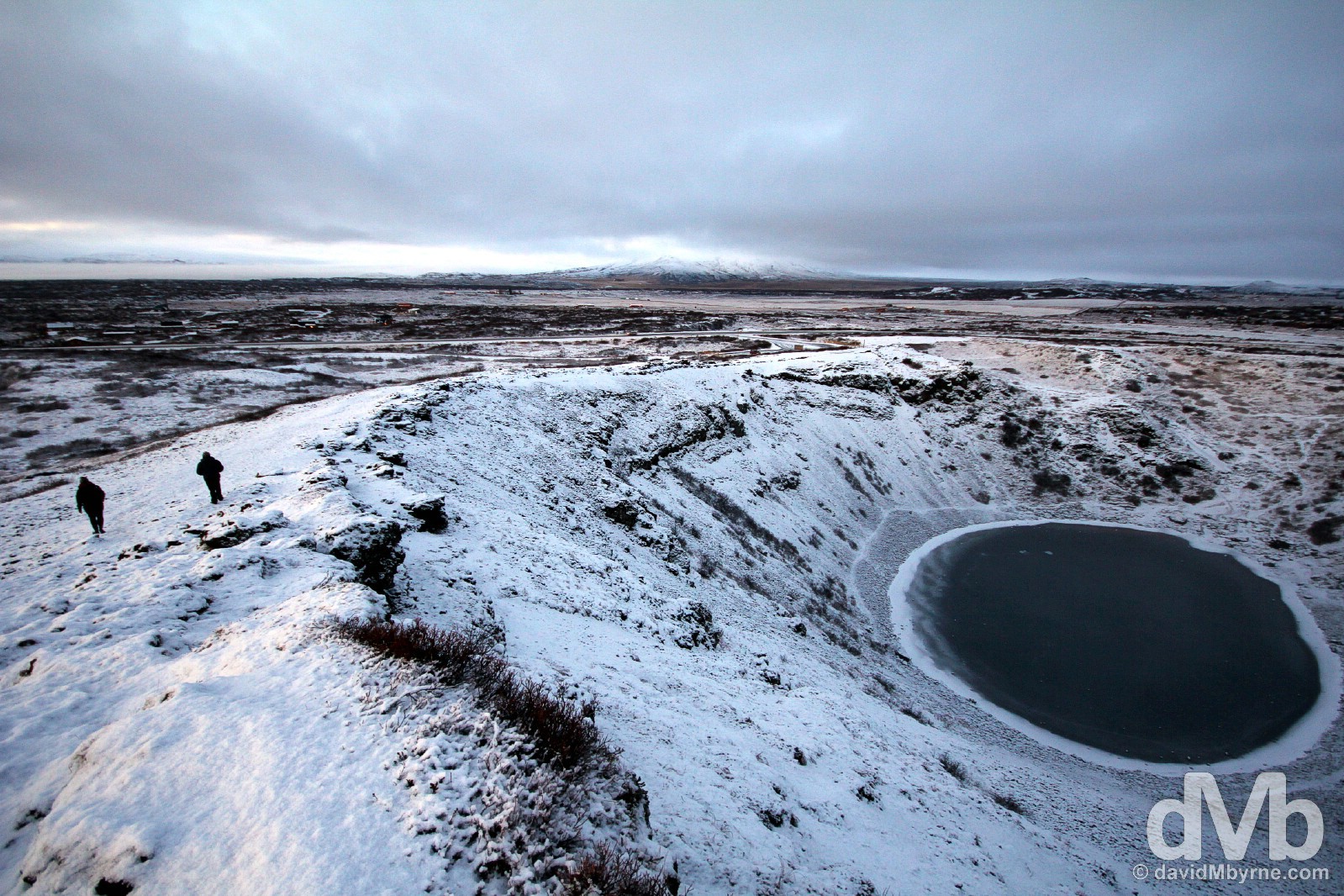 The Kerið Crater Lake, a stop on the Golden Circle route, is one of several crater lakes in the area, known as Iceland’s Western Volcanic Zone, but this is probably the easiest to access – it has one wall that is sloped more gently and blanketed with a deep moss, meaning it can be descended fairly easily (not in winter, of course). Needless to say it’s visually stunning, especially blanketed in snow. It’s also quite small – it’s approximately 55 metres (180 ft) deep, 170 metres (560 ft) wide, and 270 metres (890 ft) across, the bottom of which is fairly shallow lake (7–14 metres, depending on rainfall and other factors). 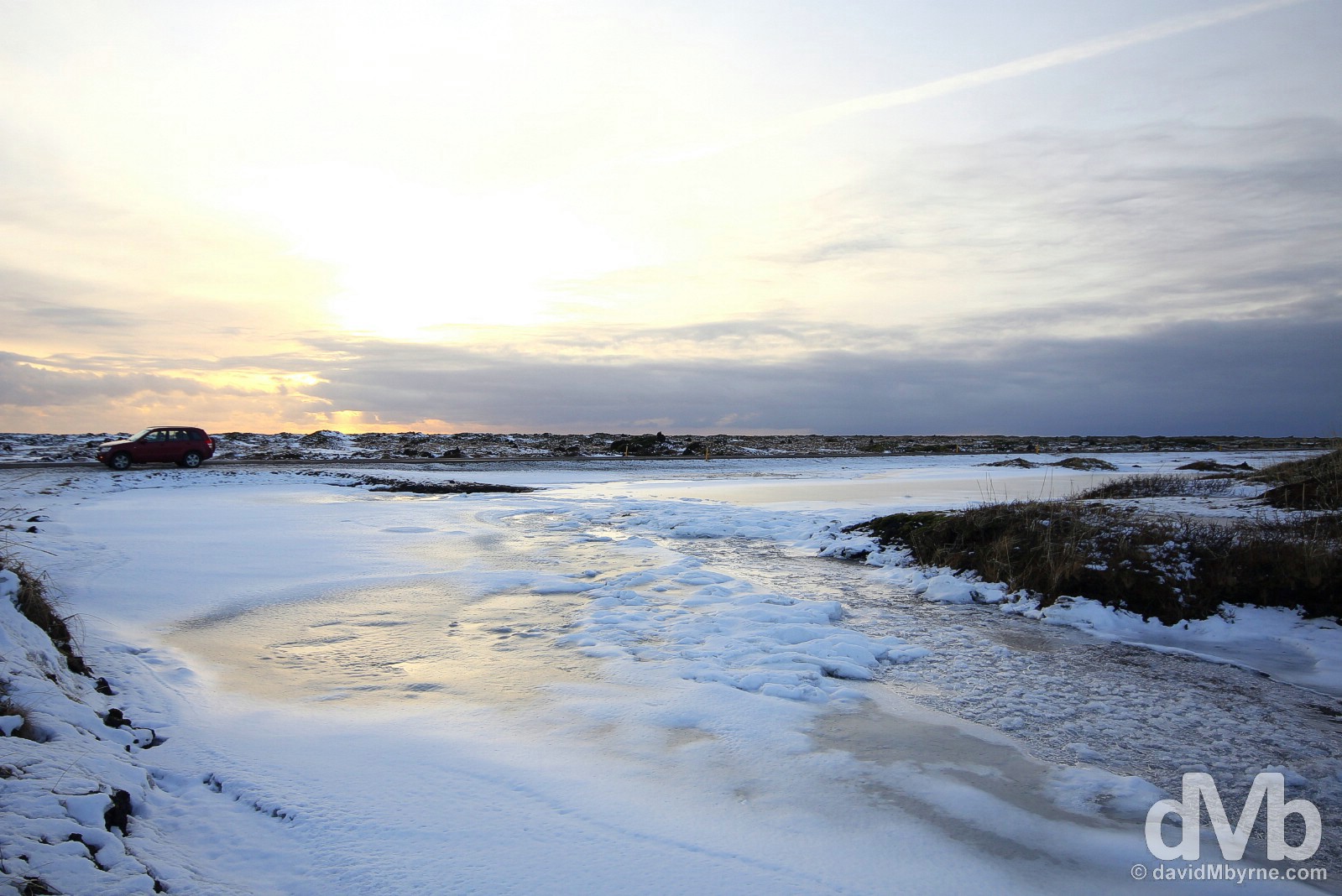 Driving Route 1 en route to Vik in southern Iceland not long after a December sunrise. December 4, 2012.

One of my enduring memories of Iceland in December will be the soft, warm lighting. At this time of year the sun rises just before 11 a.m., hovers not too far above the horizon for 5 hours and is gone by 4 p.m. It offers up some magical scenes as one might expect a 5-hour golden hour mixed with snow & ice to do . The above picture was taken on the road from the capital, Reykjavik, to the village of Vík í Mýrdal on the southern coast. It was the middle of nowhere & there were no outstanding natural features in the vicinity which caused me to pull over and get out of the car. It was simply the magical sight of the all-encompassing whiteness bathed in a soft, sunrise glow. 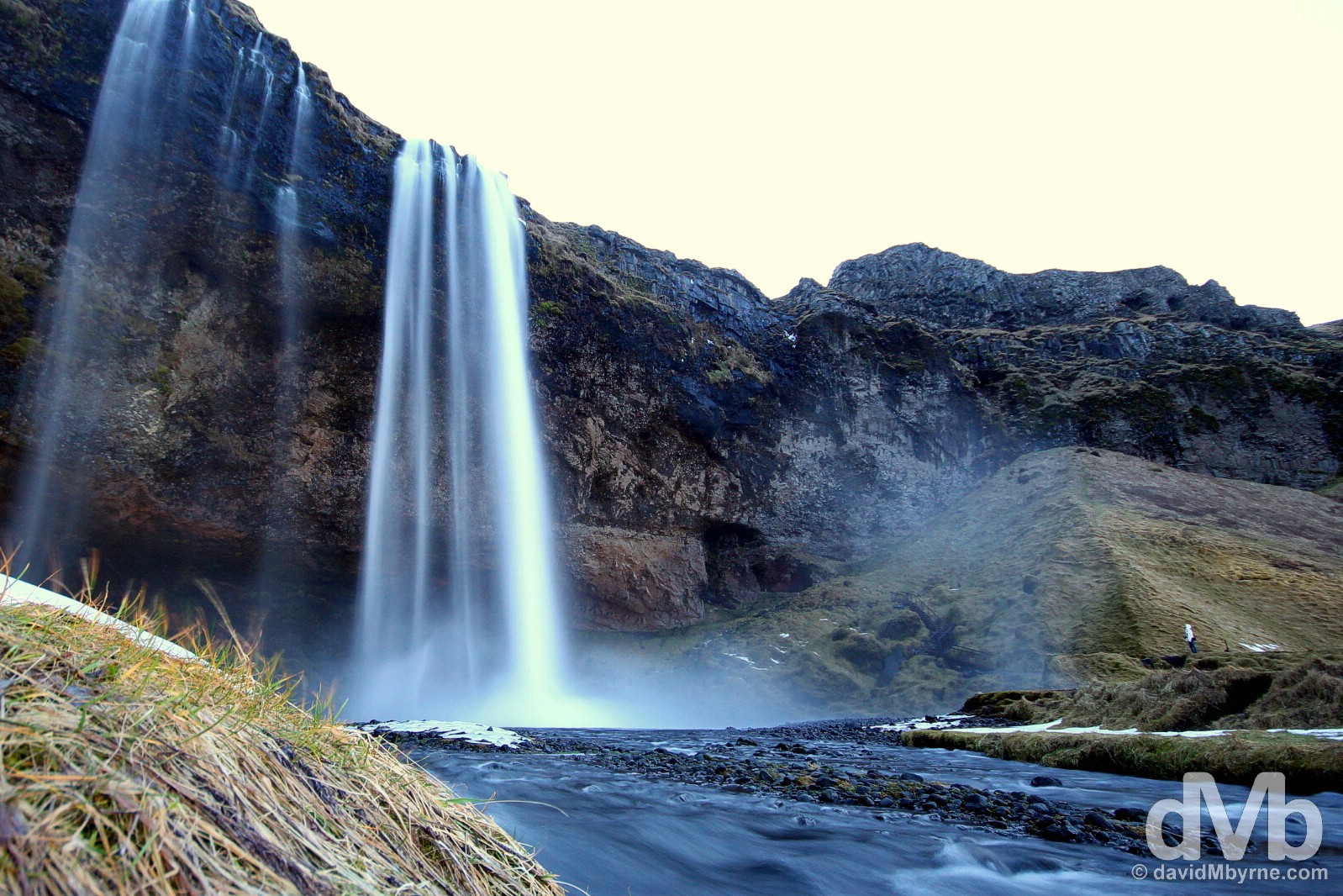 Seljalandsfoss Waterfall, just off Route 1, on the road from Reykjavik to Vik, southern Iceland. December 4, 2012.

One of the country’s most photographed falls is Seljalandsfoss, a falls which can be accessed from the rear. This offers a very different perspective of the pretty 60 metre (200 feet) veil of water from the Seljalandsá River as it tumbles over the cliff into a deep pool, a cliff that once marked the Icelandic coastline.

The above picture was captured just before 10 a.m., still about an hour before sunrise proper. It was very dull (very blue), it was cold, and it was raining. It was kind of miserable really, but oh-so enchanting & magical at the same time. The surrounding landscape was treacherously icy. As a result I wasn’t too sure where to position myself to best capture these falls, before finally settling for an icy riverbank some distance away (all that iciness made the job of photographing this all the more interesting). Look carefully & you can see the inclusion of one of my travelling party in the bottom-right of the image, just beyond the reach of the spray emanating from the falls.

Iceland has a few volcanoes, too. Quite a few actually, with the April 2010 eruption of the volcano Eyjafjallajökull making headlines around the world. While a relatively small eruption by volcanic standards, the ash cloud it generated caused enormous disruption to air travel across much of western and northern Europe. The above picture is of Mýrdalssandur, a 700 km² black sand desert. The area rests between the sea & the 590 km², 400-700 metre thick Mýrdalsjökull, the 4th largest glacier in Iceland. Katla, one of the three most active volcanoes in Iceland, sits under the glacier & eruptions in the past have caused massive ice melt, generating large-scale glacial flooding, flooding that sweeps across this plane devastating the landscape. The last eruption of Katla was in 1918 & although it’s impossible to accurately predict, those in the know say the next eruption is not too far off.

In a country of highlights this was the stand-out for me, the Jökulsárlón Glacial Lagoon, one of the biggest tourist attractions in Iceland.

The southeast of Iceland is dominated by Vatnajökull, the largest icecap outside of the poles – it a rather large 8,100 km² chunk of ice with an average thickness of 400 metres that covers 8% of Iceland’s landmass. Many massive glaciers flow from the icecap towards the sea, one of which is Breiðamerkurjökull. Eighty years ago Breiðamerkurjökull, seen in the distance to the left in the above picture, reached the sea, about 1 kilometre behind me as I took this picture. But, and like most glaciers around the world, it has been retreating rapidly since, creating this stunning glacial lagoon; after falling off the glacier the icebergs can take up to 5 years to float across the 17 km² lagoon towards the outlet to the sea. I stood by the shore of the lagoon, and on the hills overlooking it, marvelling at the spectacular concentration & intense, chilly-blue of the icebergs – the colour can be explained by the air in the ice having been pressed out, intensifying the colour of the glacial water. Having arrived here at 2:30 p.m. on a perfectly sunny & crisp day I hung around until just after the 4 p.m. sunset. As a result I got to witness this awe-inspiring landscape in varying light. These picture don’t even come close to doing the live scene justice but needless to say the reddish pink glow at sunset was particularly photogenic. 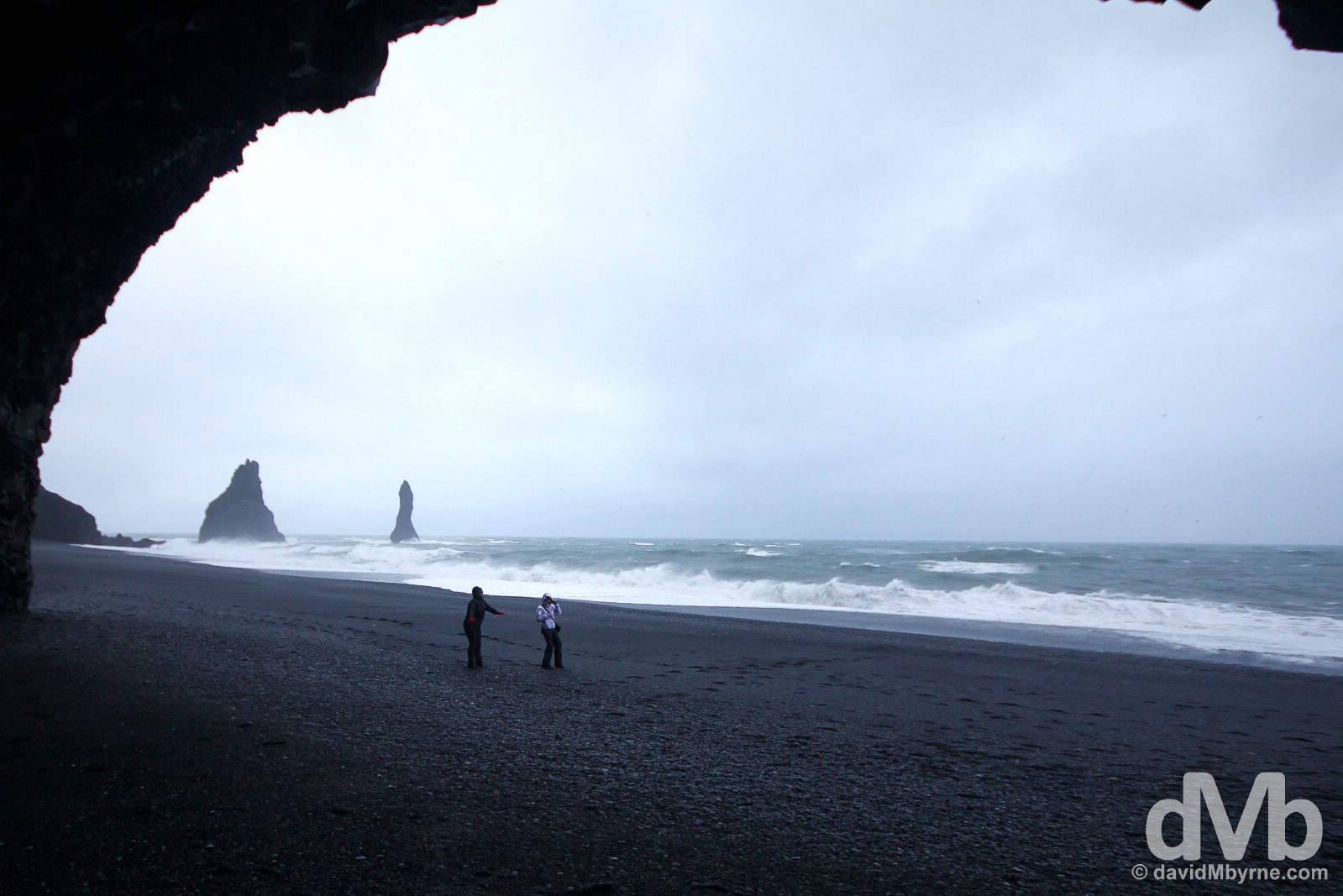 Braving the elements on the black sand beach at the base of the hill Reynisfjall in Myrdalur, southern Iceland. December 5, 2012.

The southern village of Vík í Mýrdal is famed for its location and black sand beaches, off shore of which is Reynisdrangar, giant pillars of rock, the highest of which reaches 66 metres. The wind and rain was battering the coast this day which meant taking pictures was a challenge. I took the above picture sheltered in one of many coastal caves. It, coupled with a few rubs of my trusty camera towel, saw me beat the elements for a few (very rushed) shots at least.

The last waterfall I visited was Skógafoss, another 60 metre-high (200 feet) falls & another falls the location of which used to mark the Icelandic coastline (it’s now some 5 kilometres away). The setting for the falls, a huge U-shaped cleft in a cliff, is spectacular. The spray coming off these falls, which consistently produces single or double rainbows on sunny days, coupled with the totally miserable conditions meant both me & my camera got quite a soaking. I was reluctant to subject my gear to too much abuse but I couldn’t resist attempting to capture this hardy soul on a march towards the falls. Where they were going I’ve no idea.

Unfinished Business
I already can’t wait to get back here. And I will be back. I have unfinished business. The famed Northern Lights didn’t materialise. Seemingly they are as shy as they are beautiful. A good Northern Light’s forecast for last night, December 4th, was promising but then the clouds rolled in (but not before I found myself standing in a dark field over Vík í Mýrdal (

) staring skywards). But that’s OK.I’m not too upset. I was treated to other wonders here & I (reluctantly) leave happy.

Icelandic Inspiration
In a move from a banking-reliant economy to tourist-reliant one, Iceland is growing rapidly as a tourist destination, – it’s easier than ever before to get there and explore independently. That said, if you need some help, some Icelandic inspiration, check out the good folk at Arctic Adventures. Tell them dMb sent ya!