Oh my, oh my. Mexico just keeps getting better & better. As I type I’m leaving Guanajuato and I’m sad to be doing so. This beautiful mountain colonial town, capital of the state of the same name, is considered one of the most beautiful in the whole the country. And it’s not hard, and doesn’t take long, to see why. A quaint, visually stunning, historic UNESCO-listed town chock full of pastel-coloured houses, narrow, cobbled lanes, fine Baroque and neoclassical buildings, a great café & arts scene (it’s a university town) & a truly unique museum, all crammed into the steep slopes of a ravine. Suffice to say Guanajuato is quite the destination. The only problem is taking it all in. 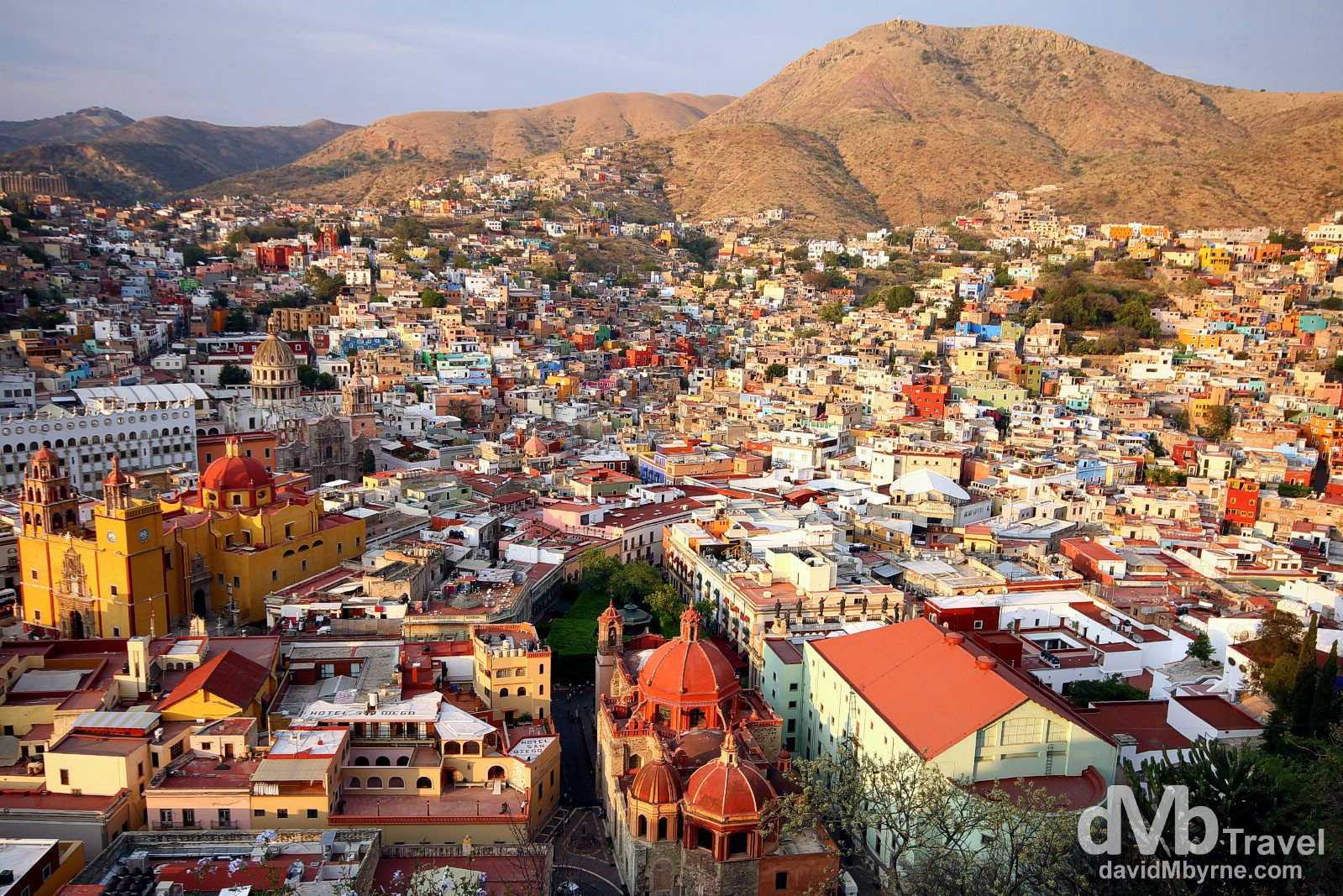 Approaching sunset in the city of Guanajuato (

Doesn’t Know Its Own Birthday
Because the town started out as nothing more than a camping site for miners, no one knows the exact day the city was founded – somewhere between 1540 and 1558 is the safe guess. It was in 1558 that a massive silver vein was discovered in the hills surrounding the settlement, a discovery which saw Guanajuato producing one-third of the world’s silver for the next 250 years. Needless to say this brought untold wealth to the city, the legacy of which is still on display for today’s visitor. And what a display.

Historic Guanajuato
Guanajuato is an historic place for Mexicans. An 1810 rebellion in the city was the first victory over the Spanish colonists and the start of the long fight for Mexican independence, one that was finally won 11 years later. As a result the city has become somewhat of a pilgrimage site for Mexicans & for the whole week either side of Independence Day, September 16, Guanajuato can be packed with domestic tourists. But don’t let that deter you; the city will be a stunning showcase no matter when you decide to stop by. Let’s take a look around. 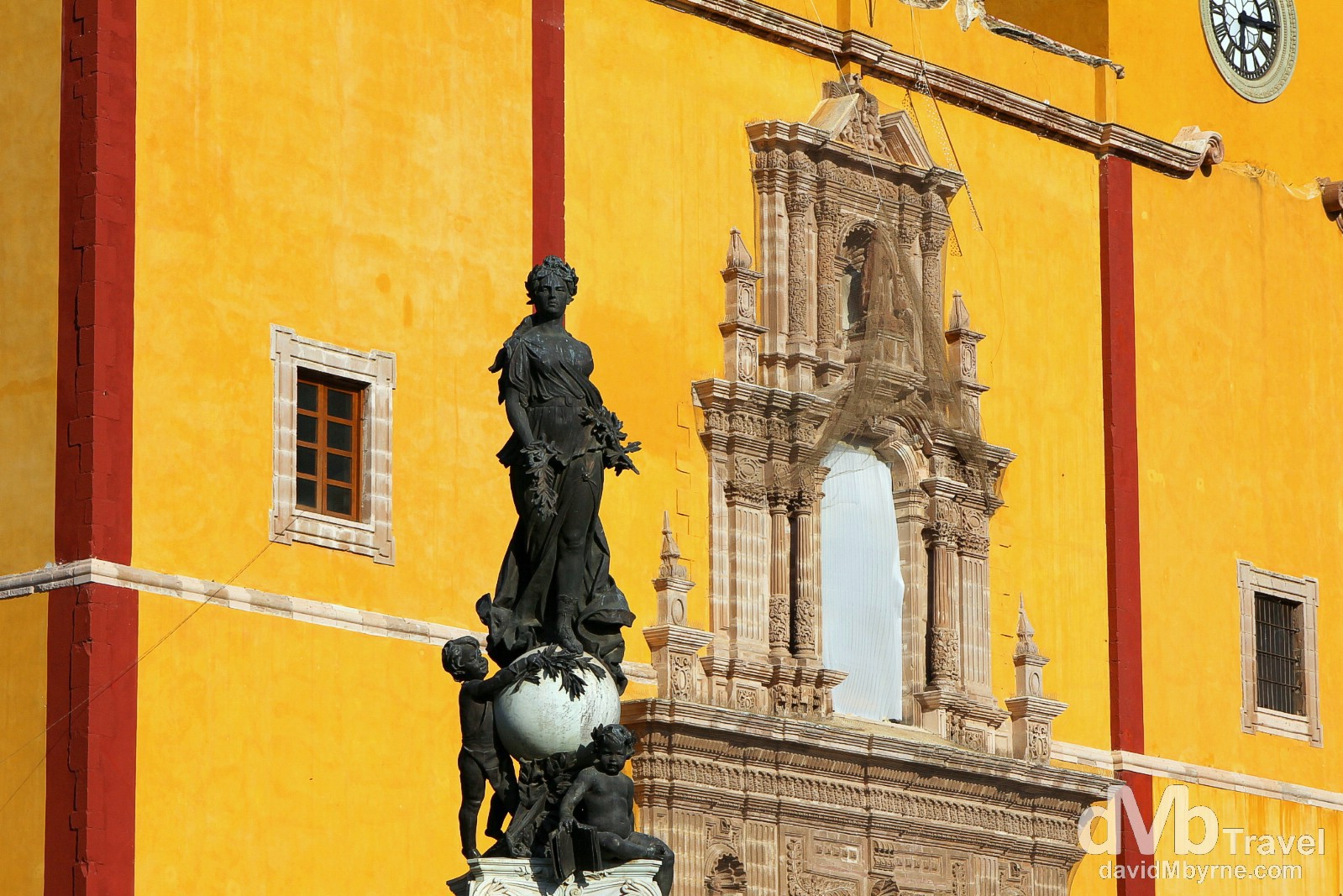 The centre of the modern city of Guanajuato is the Plaza de la Paz (Plaza of Peace), also known as the Plaza Mayor (Main Plaza). Since the colonial period, the richest of the city’s families located their main homes here, along with government buildings and the parish church, now a basilica, Basilica de Nuestra Senora de Guanajuato. Built between 1671 to 1696, it houses a 1000-year-old statue donated by Spanish King Charles I in a bid to protect it from the Arab invasion of Spain. The statue fronting the church resides in the centre of the small plaza garden. It’s a sculpture of a woman which represents peace – its placement here in the late 19th century caused the official name of the plaza to change from Plaza Mayor to its present Plaza de la Paz. Today the plaza is surrounded by the basilica, other churches, & government and commercial buildings, many of which were once mansions. Guanajuato, Mexico. April 22, 2013. 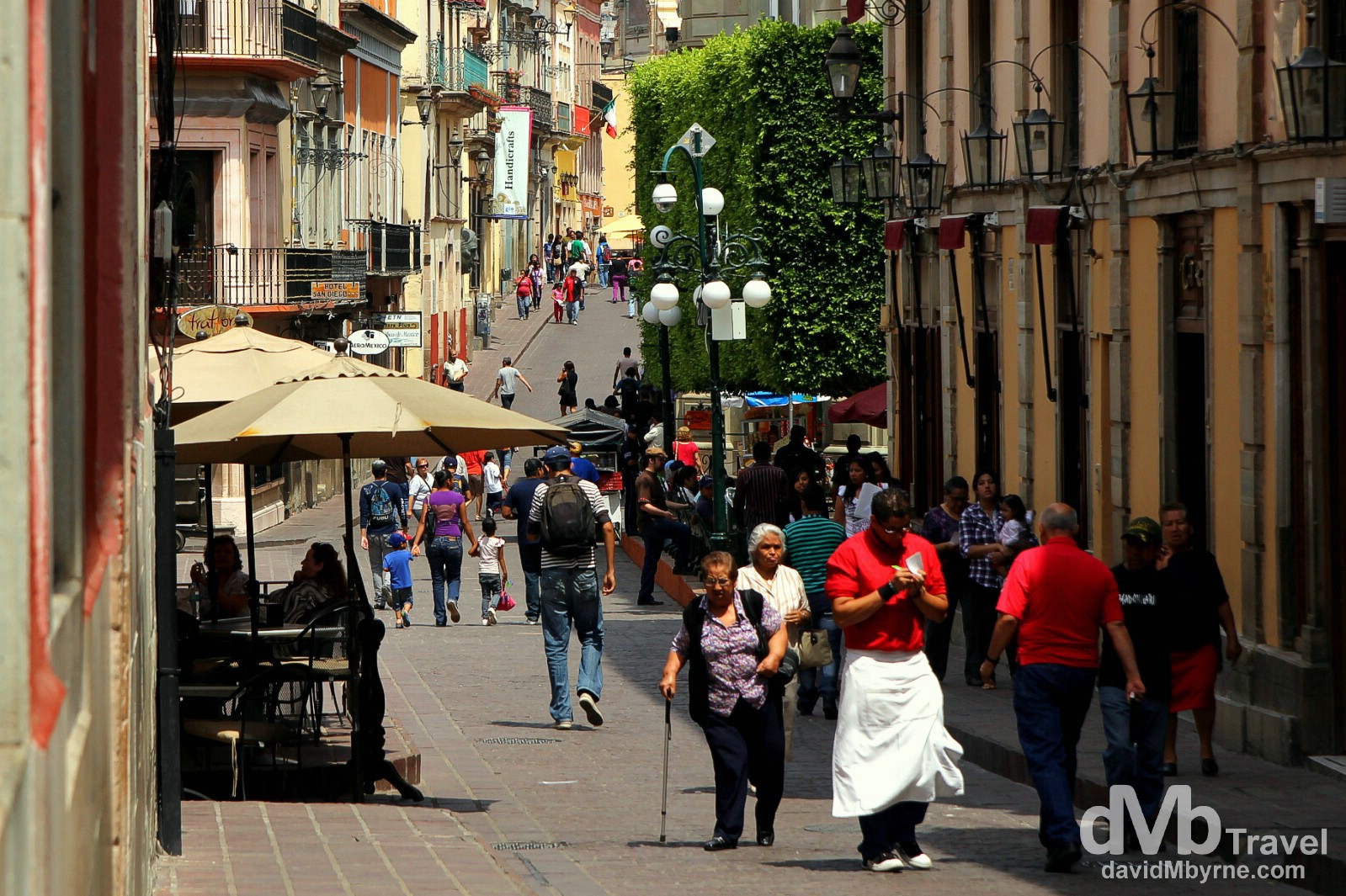 Obregon, the historic centre of Guanajuato. Granted World Heritage status by UNESCO in 1987, the city also been (rightly) ranked by several travel magazines as one of the top travel destinations in the world. Yes, the world. Mexico. April 22, 2013.

Founded by the Spanish in the early 16th century, Guanajuato became the world’s leading silver-extraction centre in the 18th century. This past can be seen in its ‘subterranean streets’ and the ‘Boca del Inferno’, a mineshaft that plunges a breathtaking 600 m. The town’s fine Baroque and neoclassical buildings, resulting from the prosperity of the mines, have influenced buildings throughout central Mexico. The churches of La Compañía and La Valenciana are considered to be among the most beautiful examples of Baroque architecture in Central and South America. Guanajuato was also witness to events which changed the history of the country.

– UNESCO commenting on the Historic Town of Guanajuato and Adjacent Mines 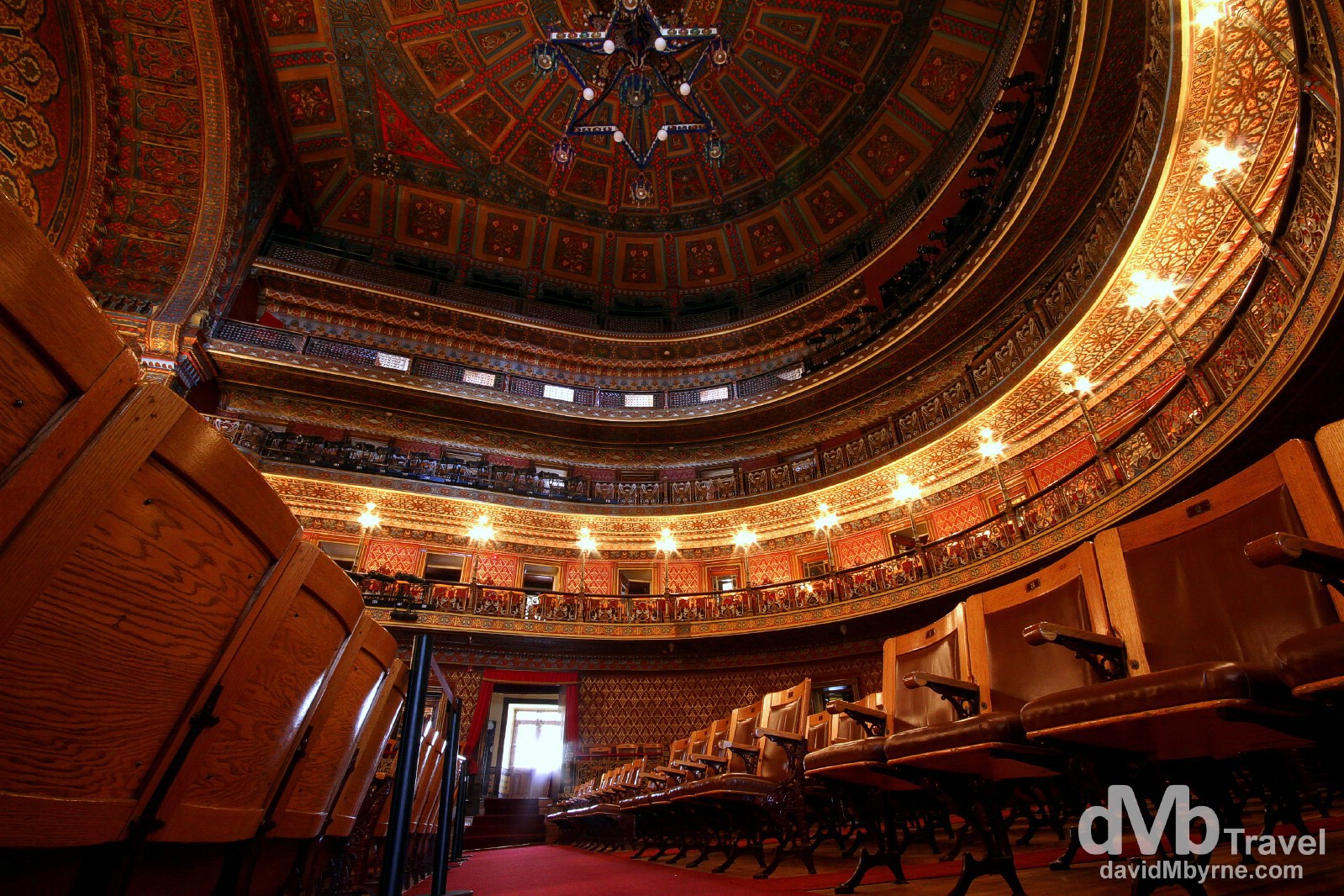 Inside the the Juarez Theater. Built between 1872 and 1903 on the back of mining riches, it’s the neoclassical façade of its exterior & its sumptuous, richly decorated interior that make this easily one of the most beautiful theatres in the country. And not only that, it’s also the only theatre in Mexico that has conserved its original furnishings. But even better than all of that is the fact that they let people like me in there with a wide angle lens. I sat in here all alone for quite a while taking in my surroundings. It was a real treat. Juarez Theater, Guanajuato, Mexico. April 23, 2013. 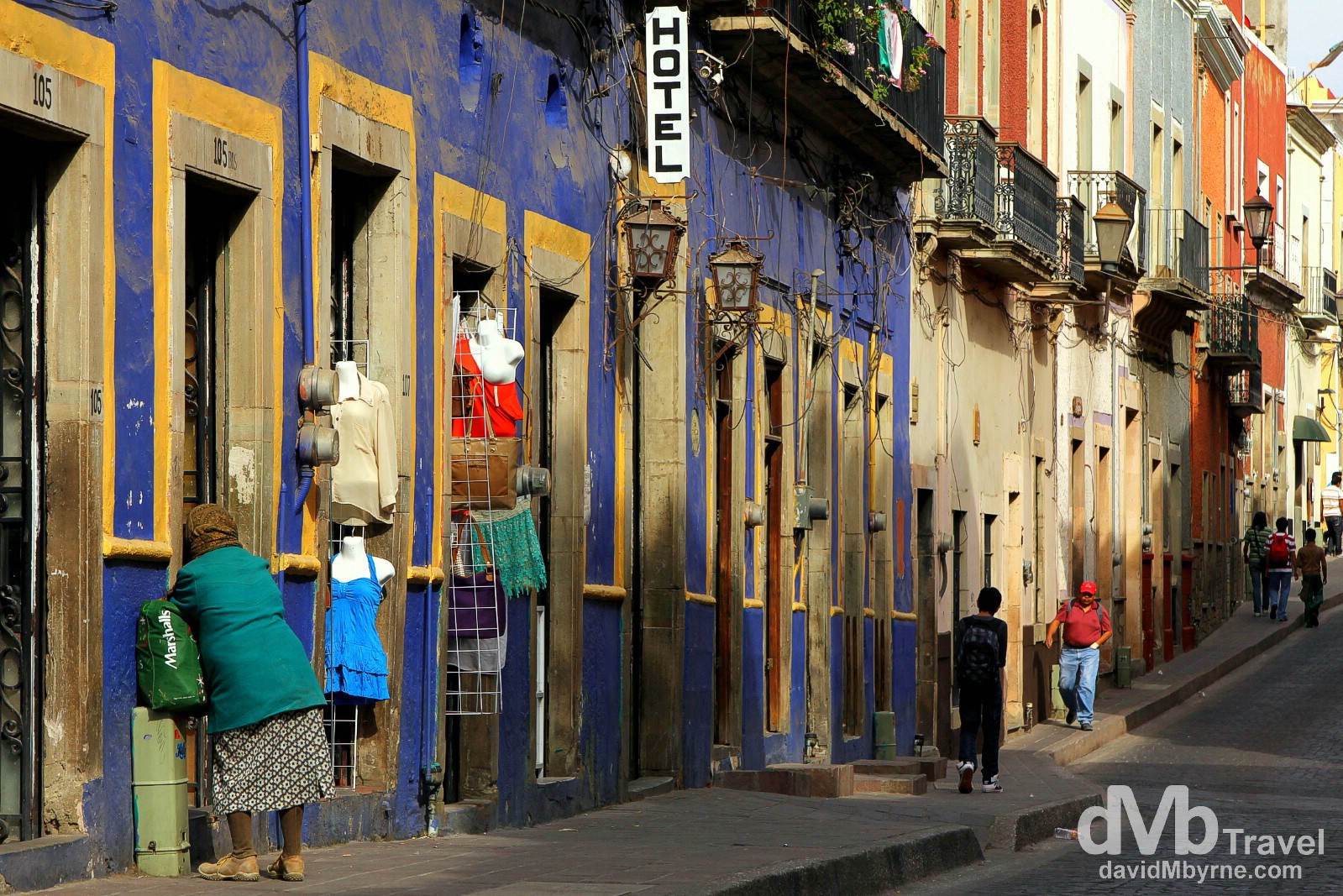 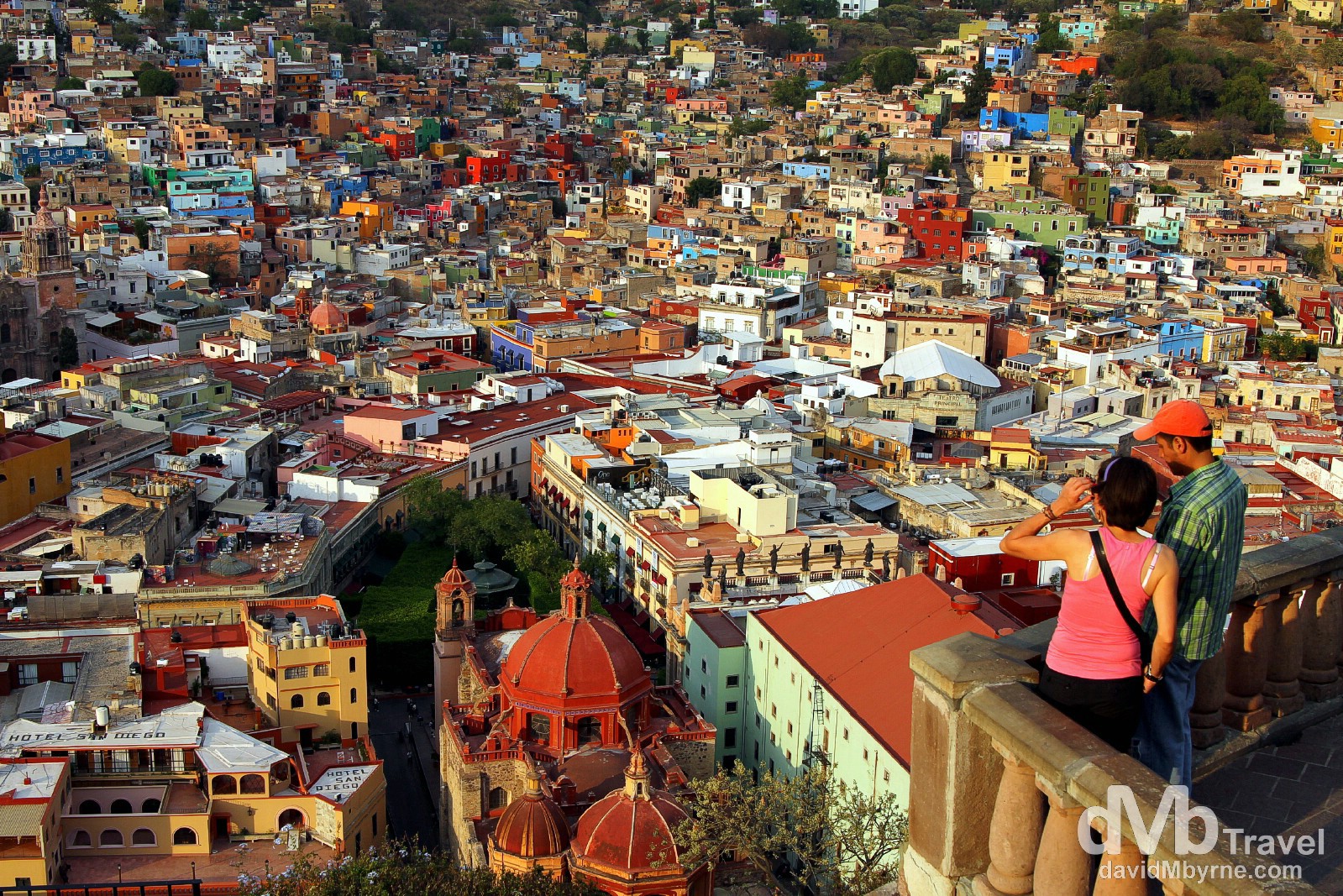 Overlooking UNESCO World Heritage listed Guanajuato as the sun sets from Panoromica. Riding the (very short) Funicular from behind Teatro Juarez to the top of San Miguel Hill is one of the must-do Guanajuato activities – you could of course walk up or, better still, & as I did, get the funicular up and get lost in the jumble of photographic lanes by walking down – it’s not far & so much fun. This vantage point is visible from all over the city as it houses a 28-metre-tall statue called El Pipila. The statue is of an independence hero who wore a stone slab on his back to protect himself while burning the Spanish troops holed up in the city’s Alhóndiga, or granary, in September 1810 during the aforementioned rebellion. The views here are spectacular, especially towards the end of the day when the light is at its softest. Guanajuato, Mexico. April 23, 2013. 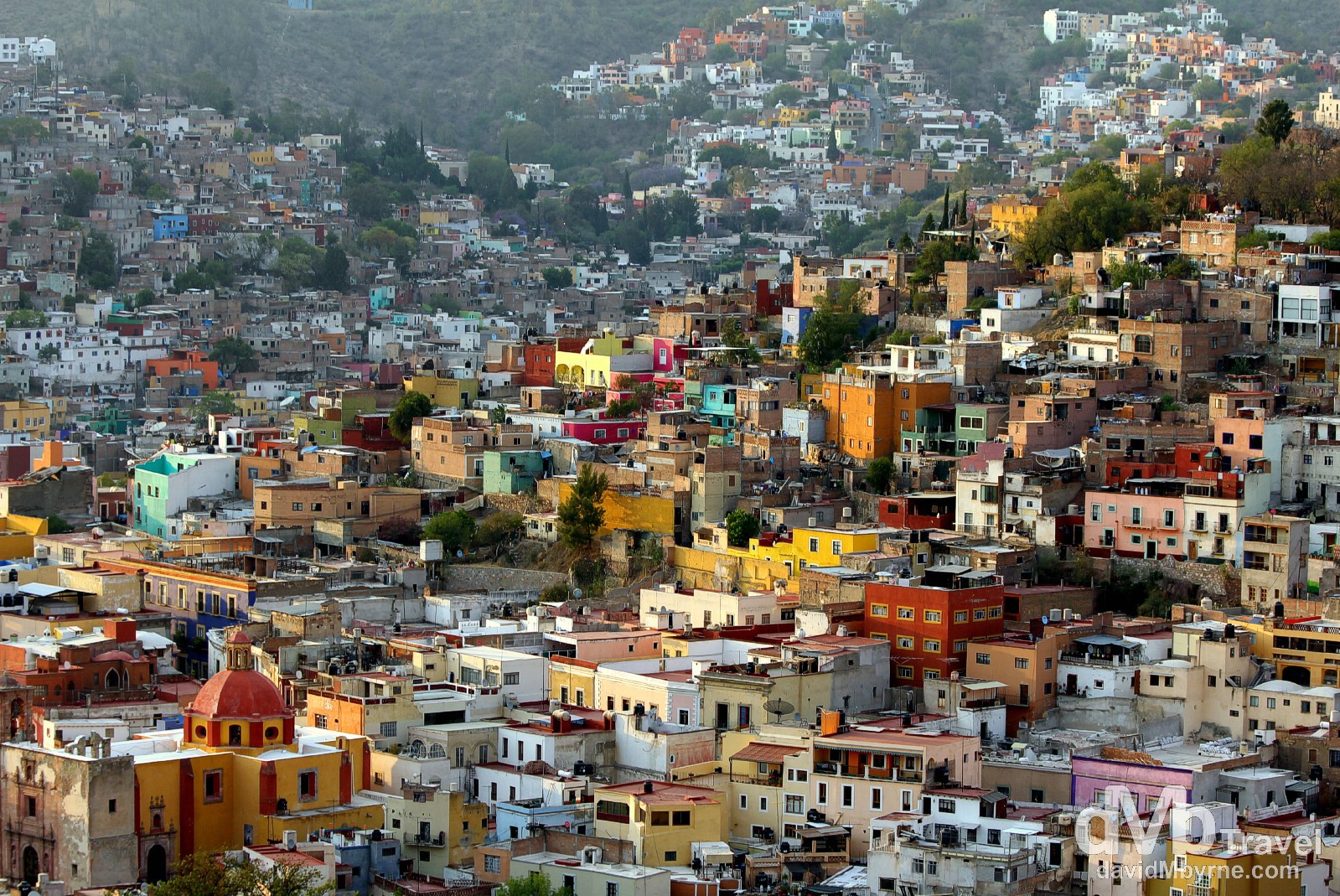 The city of Guanajuato is very compact, which means you can walk just about everywhere of interest. That said, it’s very hilly, the result of being located in a ravine in the Sierra de Media Luna – virtually every point in the city is on a slant. But ignore all that. Just walk. Meander the numerous sinuous and narrow streets, all lined with multi-storied, brightly painted colonial homes. Go up those endless stairs, or go subterranean, down into the unknown through one of the many dark, unique one-way tunnels. Go left, until you hit a dead end. Go back and go right. It’ll bring you somewhere. Somewhere fascinating. Explore. Get lost, if you can (it’s not hard). Oh, and don’t forget your camera. Ohhh please don’t forget your camera. Not here in Guanajuato. Guanajuato, Mexico. April 23, 2013. 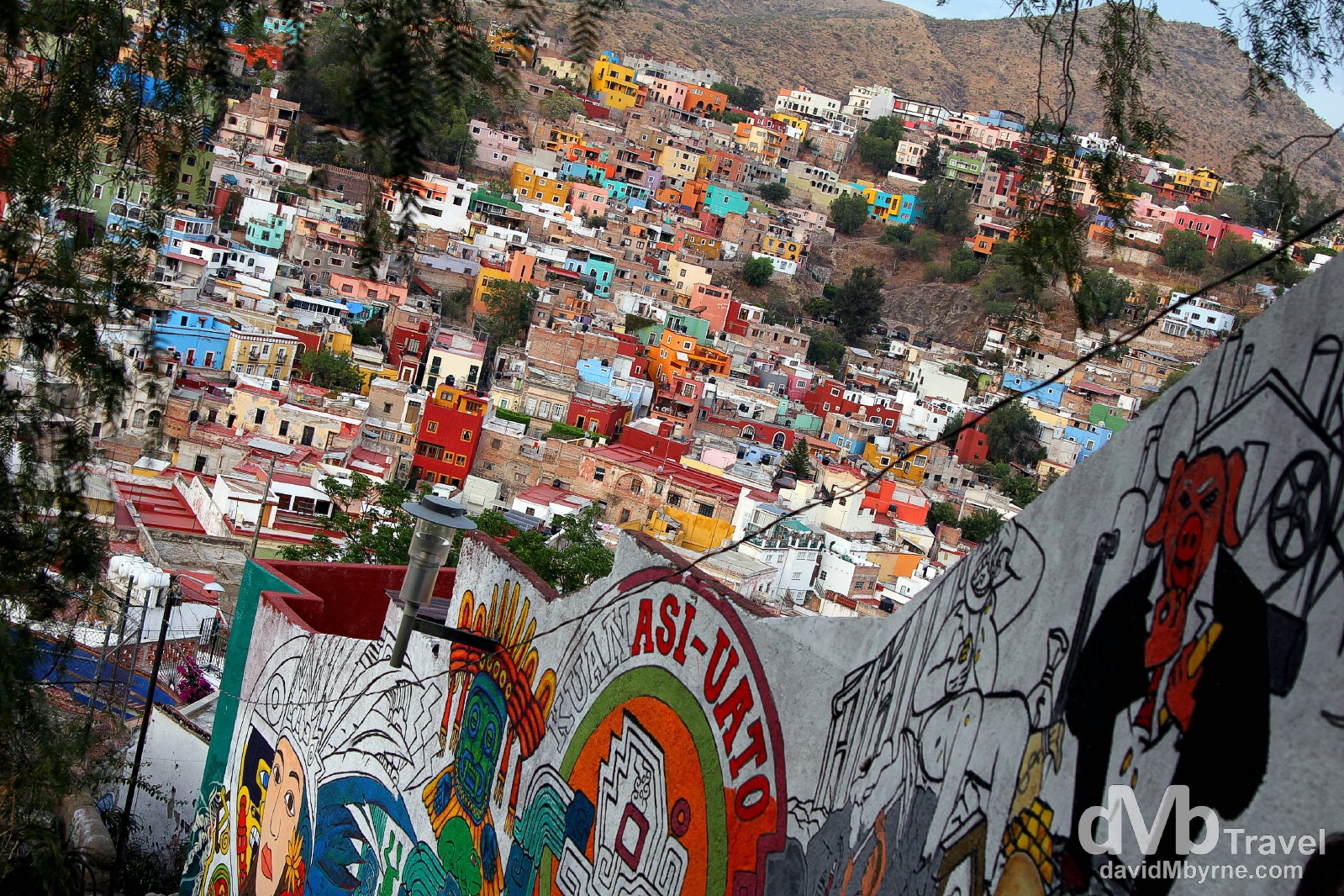 Video || Descending Down From Panoromica in Guanajuato

Guanajuato is known Mexico-wide as the site of one of the world’s most bizarre museums, the El Museo De Las Momias (Museum of the Mummies). It is largely because of the museum that Guanajuato is today one of the biggest tourist attractions in Mexico – Mexicans visit the city just to visit the museum. And after visiting myself I can understand why – it truly is unique, a museum the likes of which I have never visited before. 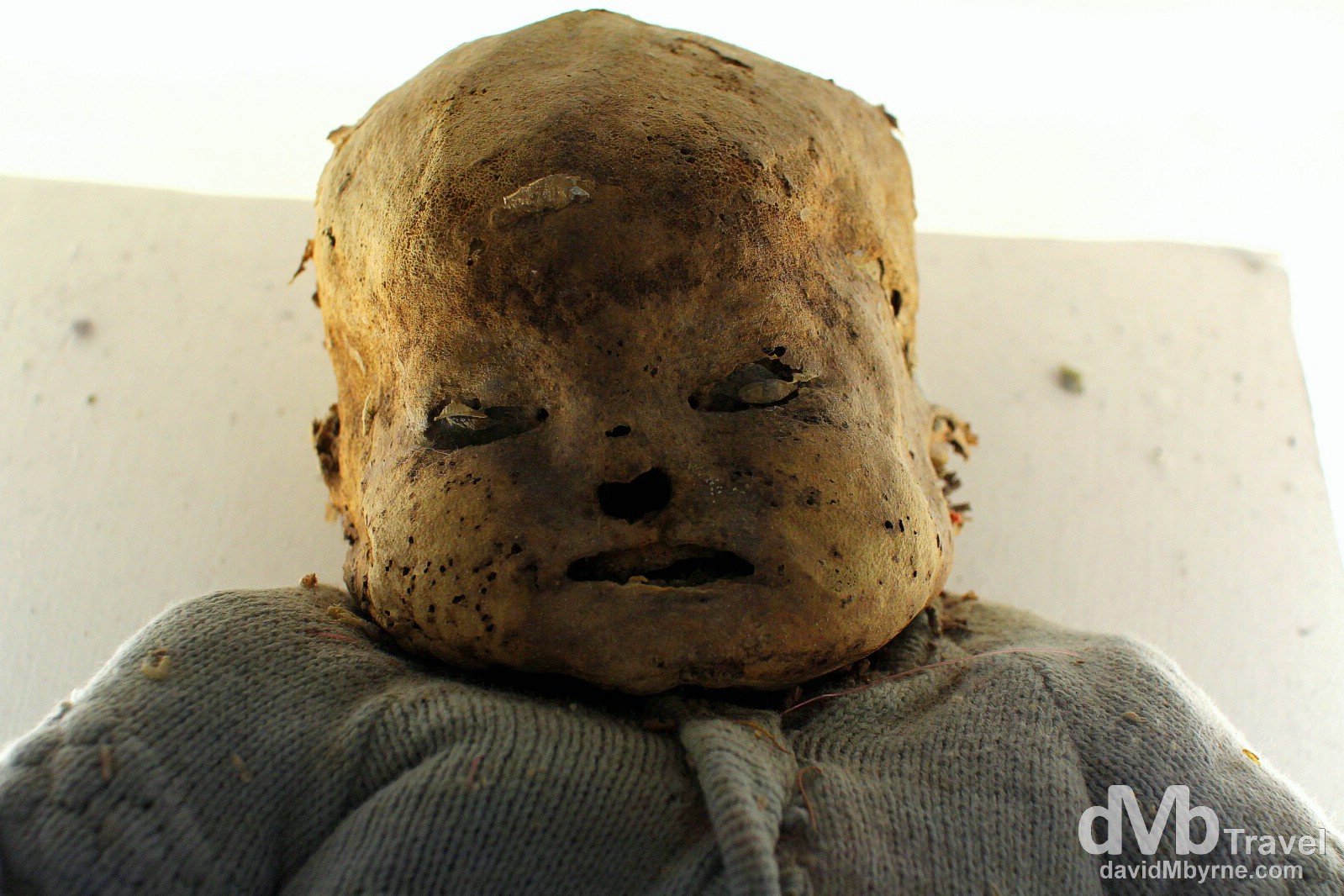 The museum houses some 100+ mummified bodies of people – men, women & children – initially buried in local cemeteries. Due to a lack of space, & to make way for the ‘new dead’, their bodies were exhumed when relatives either refused to pay or couldn’t afford to pay a tax to keep them underground. When exhumed it quickly became obvious that the bodies were not, & as one might expect, skeletons but instead were remarkably well preserved – this was because of the unusually high levels of lime & clay in the soil. The bodies were disinterred between 1865 and 1958, when a law was passed prohibiting further disinterring, & were stored in a building thereafter. It wasn’t until the 1900s, however, that they began arousing the interests of tourists, so much so that the building housing them was eventually turned into a museum, El Museo De Las Momias (Museum of the Mummies), which still today exhibits the original mummies from behind protective glass to ever-growing crowds of bemused & shocked visitors. 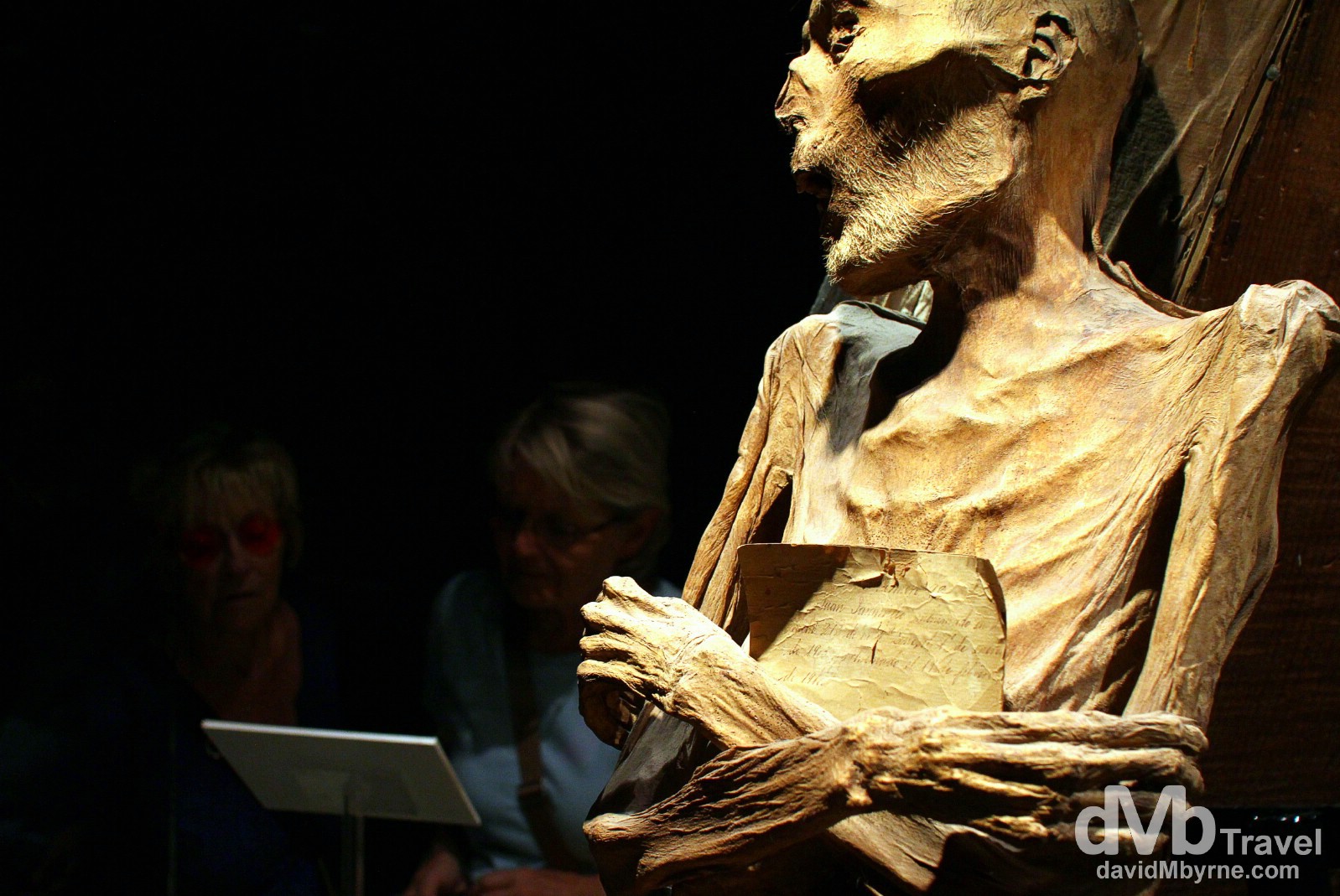 Visiting the museum is a rather eerie & surreal experience, one you’re not likely to forget for a long time. Captions accompany most of the adult mummies helping to put a personal, somewhat humorous twist on a visit to the adult mummy section of the museum – the air is a little more sedate, & the captions a little scarcer, in the infant mummy section. The caption on the mummy in the above picture, who seems to be a bit of a chest-pumping boaster, reads:

I was brought to this cemetery on the first day of the year 1903. On February 19th, 1910, they removed me from niche number 212 of the 4th series of the Santa Paula Cemetery. I have been invited to other museums in other countries. Who would have thought it? A travelling mummy. But don’t think that it was pure luck. The fact is that I am the best preserved mummified body; I have my dentures, and my skin does not have any holes. Considering that for many years I had no protection whatsoever from noisy & touchy people, I am in much better shape than my partners.

I took a bumpy, dusty 15-kilometre local bus ride from Guanajuato to the summit of Cerro de Cubilete, said to be the exact geographical centre of Mexico. Why? To see Cristo Rey (Christ the King) of course. 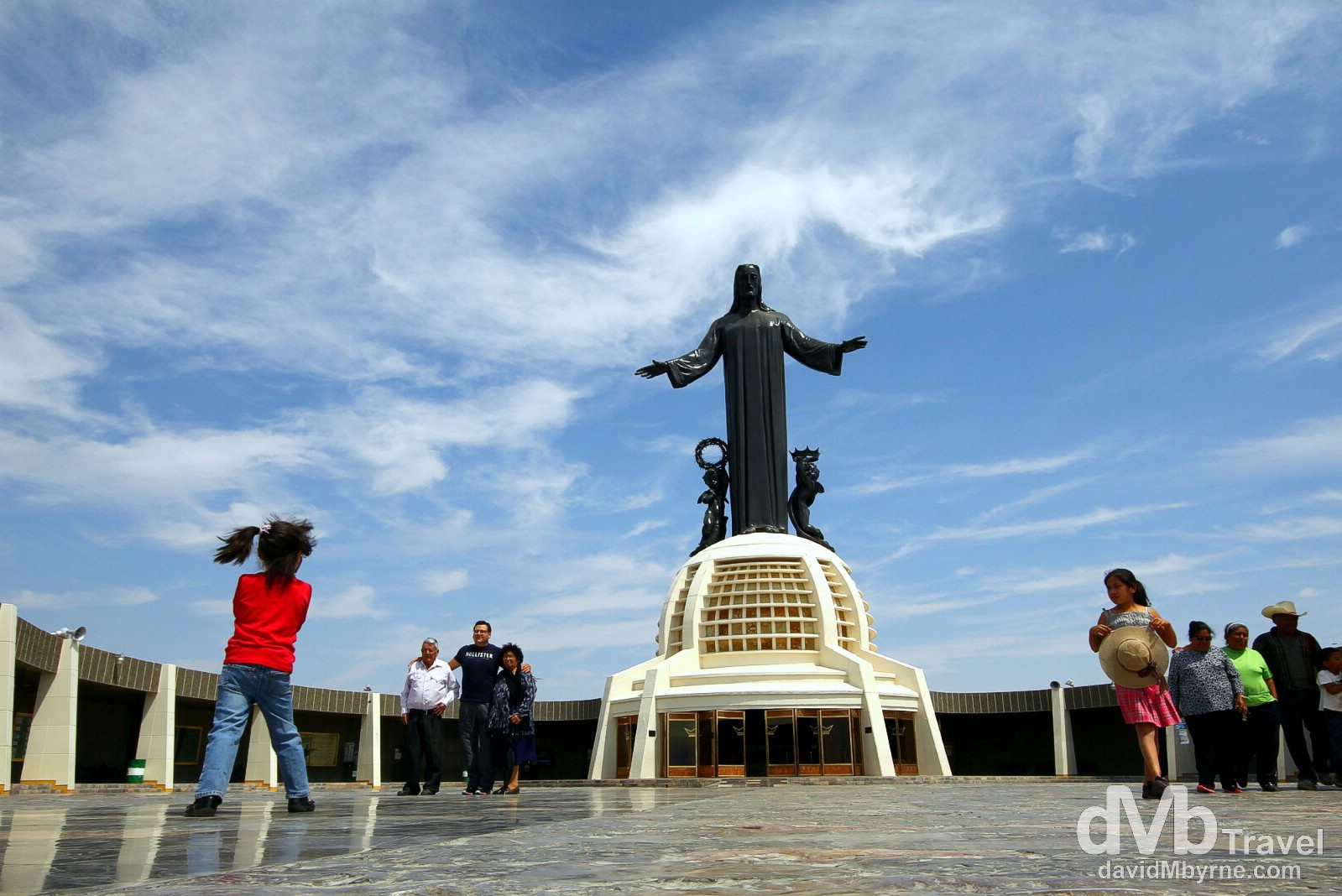 Visible for miles, Cristo Rey (Christ the King) is a 20 metre bronze statue of Jesus on the summit of Cerro de Cubilete, said to be the exact geographical centre of Mexico. It was erected in 1923 and shows Christ with his arms extended & flanked by two angels who hold a crown of thorns (left) and a royal crown (right). The sculpture weighs 250 metric tons & is a popular pilgrimage site for oh-so Catholic Mexicans. Perched high on Cerro de Cubilete, the views of the surrounding Bajio Valley are awesome. The Cristo Rey (Christ The King) Monument, Cerro de Cubilete, Central Mexico. April 23, 2013.

Next Stop
Guanajuato, my third stop in Mexico, is a very pleasant 3-hour bus ride from Guadalajara, & thus 3 hours closer to Mexico City, my next stop. I suspect things may be a tad busier there.