The Sleepy & Unkempt Centre Of The Mongolian Universe

Mongolia, a country that conjures up visions of the untamed – Genghis Khan, camels wandering the Gobi Desert and wild horses galloping across the steppes. The huge, landlocked country, the 17th largest in the world, is a little remote, a little removed, so not too many people venture up here and most that do visit use the country capital of Ulan Bator as a stop-off en route to/from Beijing or Russia on the Trans-Mongolia Railway. And that’s exactly what I have done. Twice now. It had been almost 7 years since I was last in Mongolia and I was looking forward in particular to getting back to its capital, the sleepy, unkempt centre of the Mongolian universe.

A man in a traditional Mongolian del descends the steps in front of the enormous Genghis Khan statue in Sükhbaatar Square, Ulan Bator (

The Mongolian capital has the look and feel of a neglected 1950’s European city. Even now, over 20 years after the fall of the Soviet Union, the city is still dominated by communist style high-rise apartment buildings & old Soviet cars and buses still ply the streets. There’s an unkempt feel to the place that goes hand in hand with an unrushed laid-backness. Admittedly there’s not a lot, if any, stand-out sights here. But that’s OK because for me the city is all about its people – it’s a great place for street photography with subjects running the gamut from elderly traditionally dressed Mongolians to the smartly dressed nouveaux riche. Sükhbaatar Square, which marks the centre of the city, was named after Damdiny Sükhbaatar, the ‘hero of the revolution’ who, in July 1921, used the square to declare Mongolia’s independence from the Chinese. It’s the primary people-watching location in town.

Genghis Khan
When in Mongolia, you’re never too far from a reference to Genghis Khan (‘khan’ meaning chief or leader). Before his arrival, the Mongols and other nomadic peoples of Northern Asia seldom united and had little inclination to do so; they preferred instead to be nomadic, widely scattered over great areas and frequently on the move with their animals in search of pasture. They wanted to live as separate clans, united only in the face of a common threat. Genghis put an end to that – he united all the clans & led them to victory in war after war resulting in the largest empire the world has ever seen, or is likely to see. To Mongolians, Genghis Khan embodies strength, unity, law and order. He is the young king who united the warring clans and gave Mongolians a sense of direction. This is what post-communist Mongolia looks for today and Genghis Khan epitomises the historic ability to rise above confusion and uncertainty. His ubiquitous face adorns bottles of Genghis Khan vodka and beer as well as money and postage stamps. Ulan Bator’s best hotel, rock band and brewery are all named after him. Despite his reputation abroad, an understandable renewed nationalism has resulted in a reverence for the Great Khan, history’s best known Mongolian. 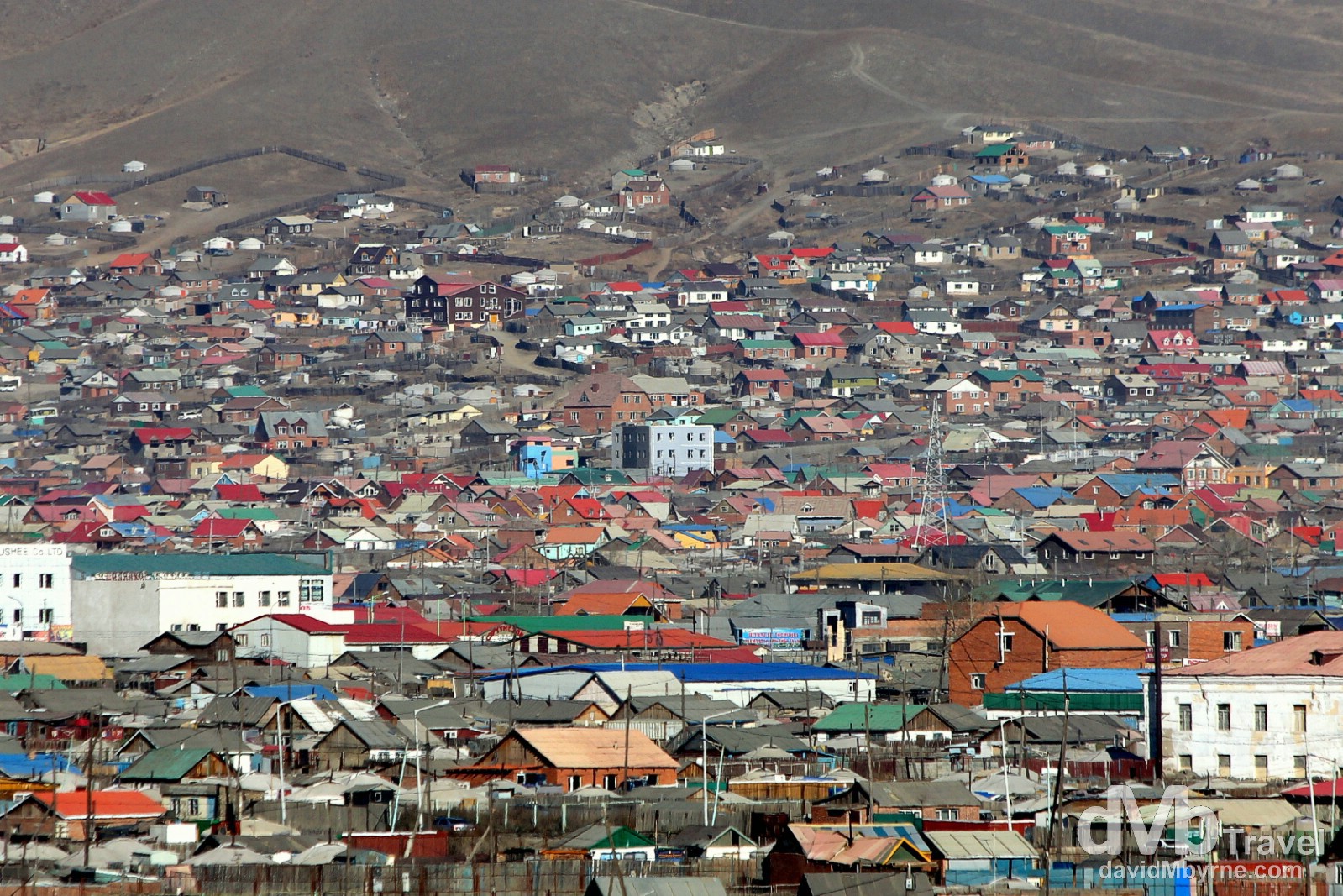 A section of Ulan Bator, Mongolia, as seen from Zaany Tolgoi, or Elephant’s head, a hill overlooking the city. I ventured up here to be reacquainted with the view of Ulan Bator’s outskirts, a sight that’s none too appealing – even from here the ramshackle condition of the outer city suburbs is apparent. Ulan Bator, Mongolia. November 1, 2012. 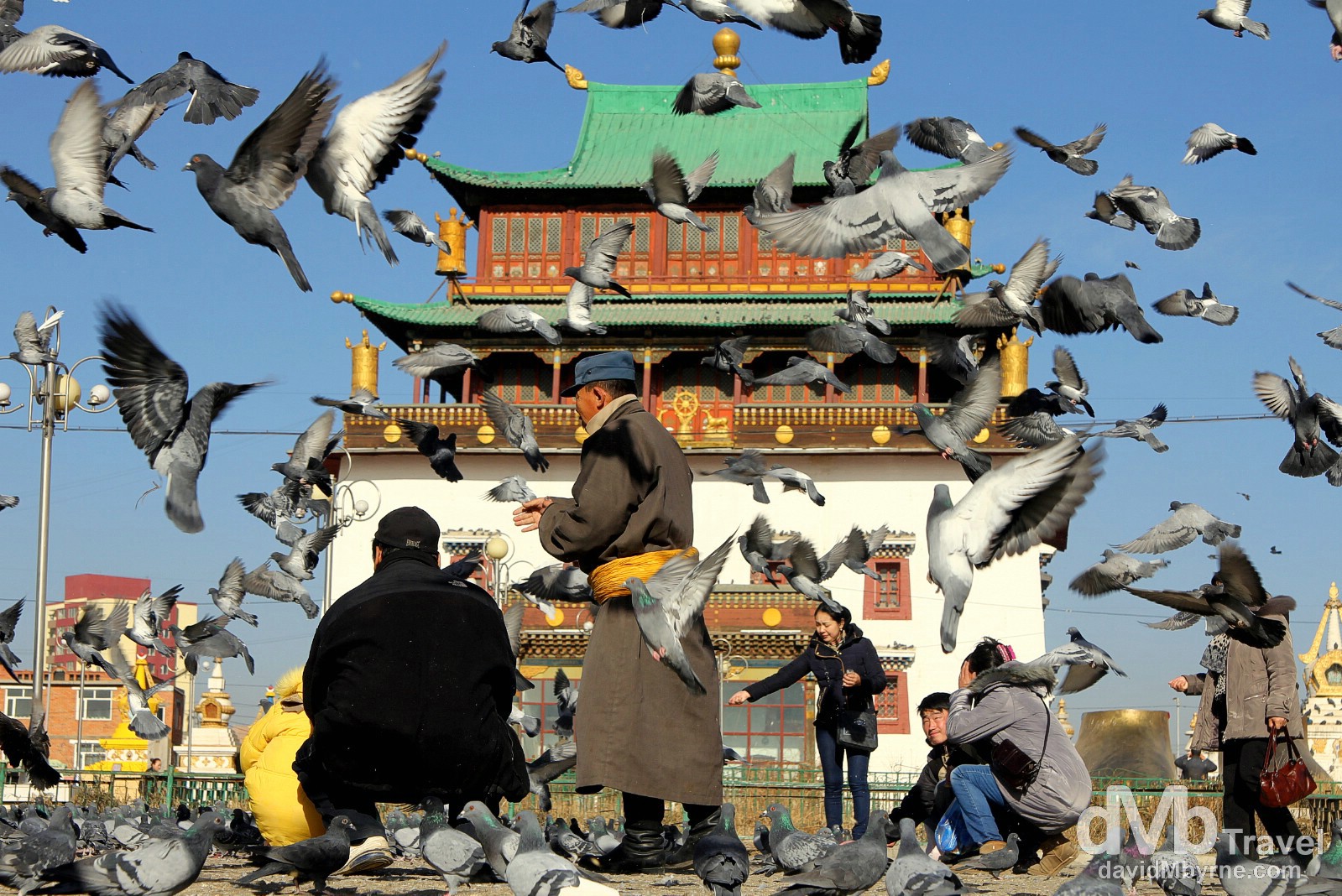 Feeding pigeons in front of the Migjid Janraisig Sum in the grounds of Gandantegchinlen Khiid, Ulan Bator. Hundreds, maybe thousands of pigeons congregate in the square fronting Migjid Janraisig Sum (a Buddhist temple) waiting to be fed. A nervous disposition ensures they take flight en masse as a result of any sudden movement, providing a very photogenic scene. Ulan Bator, Mongolia. November 1, 2012.

The Migjid Janraisig Sum, found in the grounds of Gandantegchinlen Khiid (meaning ‘the great place of complete joy’, a Khiid being is a Buddhist monastery), is the biggest and most important Buddhist temple in the country, not to mention the most impressive building in Ulan Bator, a city with not too many impressive buildings. Only 2 generations after Genghis Khan, the imperial court took to Buddhism; the court was persuaded that the energies at the command of the lamas were greater than those of the shaman warriors and their Gods. Since then Mongolians have always taken wholeheartedly to Tibetan Buddhism and the links between Mongolia and Tibet are old and deep. Once in a lifetime, every devout Buddhist Mongolian tries to reach the holy city of Lhasa; the Tibetans in turn have relied on various Mongolian tribes to sustain their power.

At the time of the Russian takeover of Mongolia in 1921 there were 110,000 lamas (monks) living in about 700 monasteries. Stalin believed the religion was anti-communist and thus beginning in the 1930s thousands of monks were arrested, sent to Siberian labour camps and never heard from again. Except for this monastery, which was kept as a showcase temple to impress foreigners, all monasteries were closed and ransacked and all religious worship was outlawed. It wasn’t until 1990 that freedom of religion was restored & since then there has been a phenomenal revival of Buddhism (and other religions); monasteries have reopened and even some ex-Communist Party officials have become lamas.