The UNESCO-listed city of Teotihuacan, known as the City of the Gods, was built between the 1st and 7th centuries AD. At it’s height, between the 2nd & 5th centuries, it was the largest Pre-Columbian city in the Americas with a population estimated at over 100,000. The name Teotihuacan also refers to the civilization this city dominated, which at its greatest extent included most of Mesoamerica (present day Mexico & Central America). The site, some 50 kilometres north-east of Mexico City, is noted for its two massive architecturally significant pyramids, Piramide de la Sol (Pyramid of the Sun) and Piramide de la Luna (Pyramid of the Moon), laid out on geometric and symbolic principles.

The holy city of Teotihuacan (‘the place where the gods were created’) is situated some 50 km north-east of Mexico City. Built between the 1st and 7th centuries A.D., it is characterized by the vast size of its monuments – in particular, the Temple of Quetzalcoatl and the Pyramids of the Sun and the Moon, laid out on geometric and symbolic principles. As one of the most powerful cultural centres in Mesoamerica, Teotihuacan extended its cultural and artistic influence throughout the region, and even beyond.

– UNESCO commenting on the Pre-Hispanic City of Teotihuacan 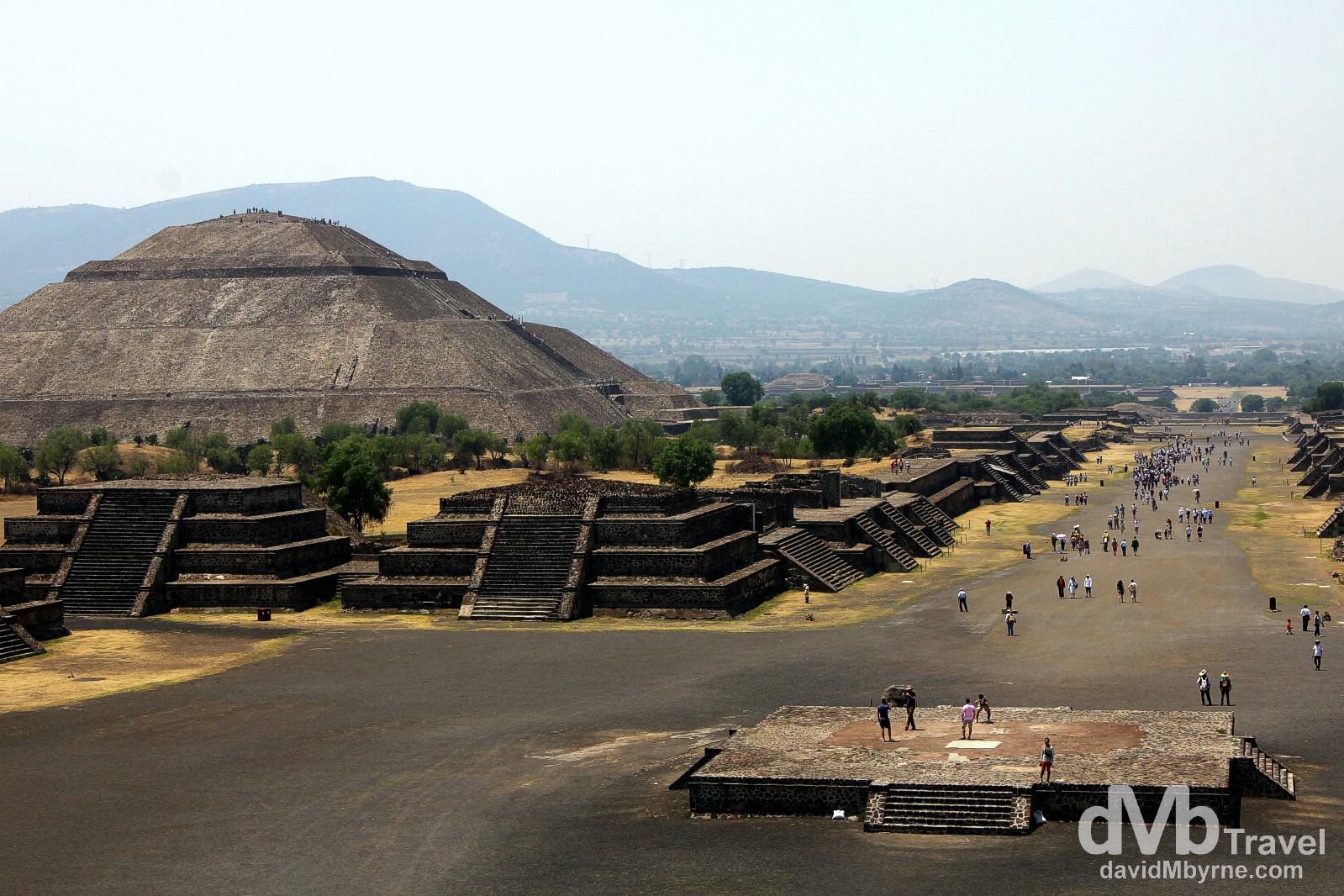 This is the iconic view of the Teotihuacan complex – looking over Moon Plaza and down Calzada de los Muertos (the Avenue of the Dead) towards the massive Piramide de la Sol (the Pyramid of the Sun) from the steps of the Piramide de la Luna (the Pyramid of the Moon) in Teotihuacan. This was a rigorously planned city with a highly symbolic distribution of buildings. Well advanced indigenous engineering technologies were applied to create the central monumental zone seen here with an exceptionally precise and standardised architectural style. The current city layout demonstrates that Teotihuacan leaders manifested their unique cosmology utilising profound knowledge of mathematics and astronomy. Teotihuacan ( 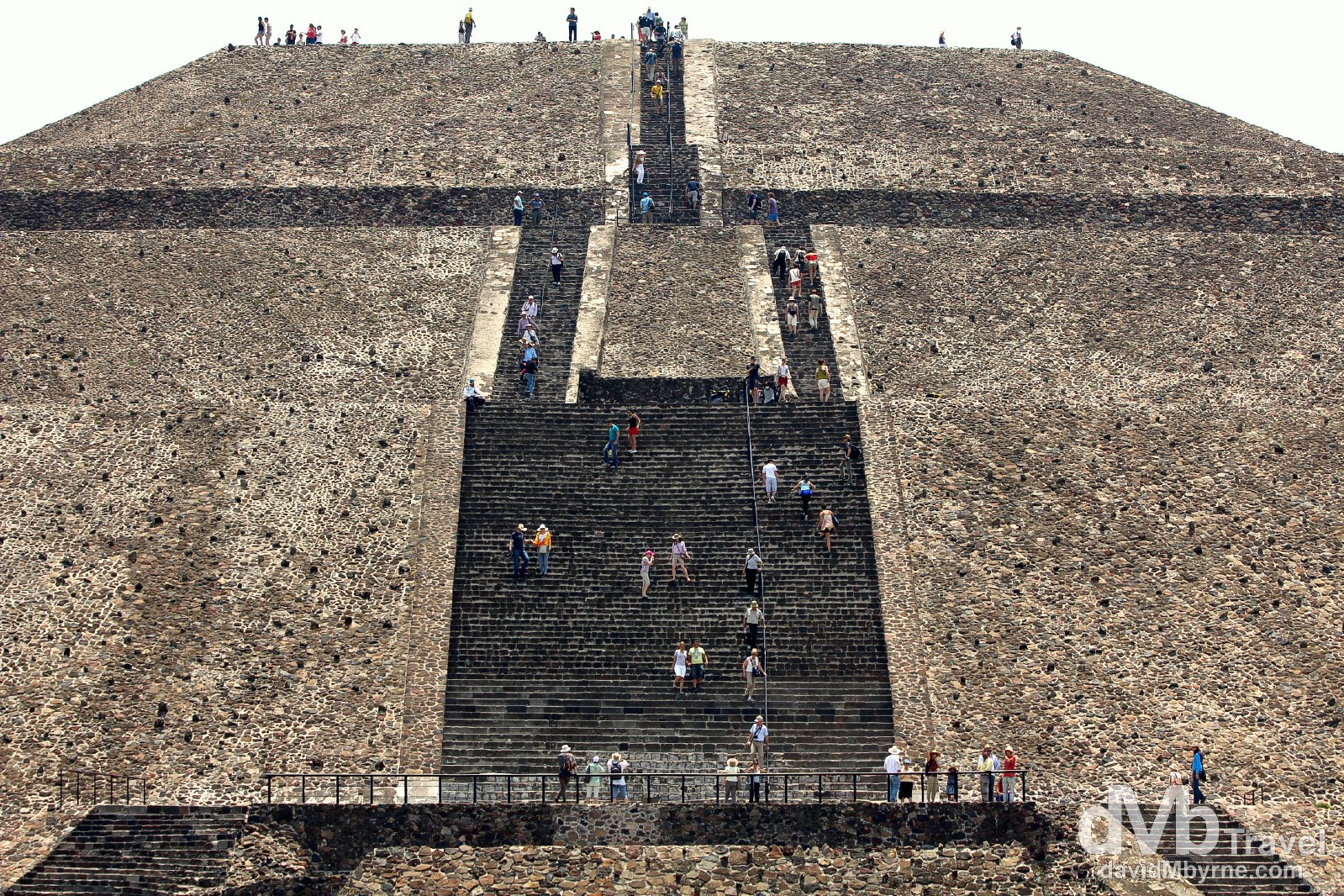 Scaling the Piramide del Sol (Pyramid of the Sun), the third largest pyramid in the world. Teotihuacan’s biggest monument (it measures 224 metres at the base and is 64 metres high) is one of the largest man-made structures of ancient times, as well as the oldest known building in Teotihuacan. Starting around 100 AD, it is believed to have been built in four phases (accounting for its four distinctive layers) using soil & stone from a nearby valley. It it was dedicated upon construction to the god of rain, not the Sun, the name by which it is known today & a name was given to the structure by the inhabitants of the valley some centuries after the city’s abandonment & destruction. Teotihuacan, Mexico. April 29, 2013. 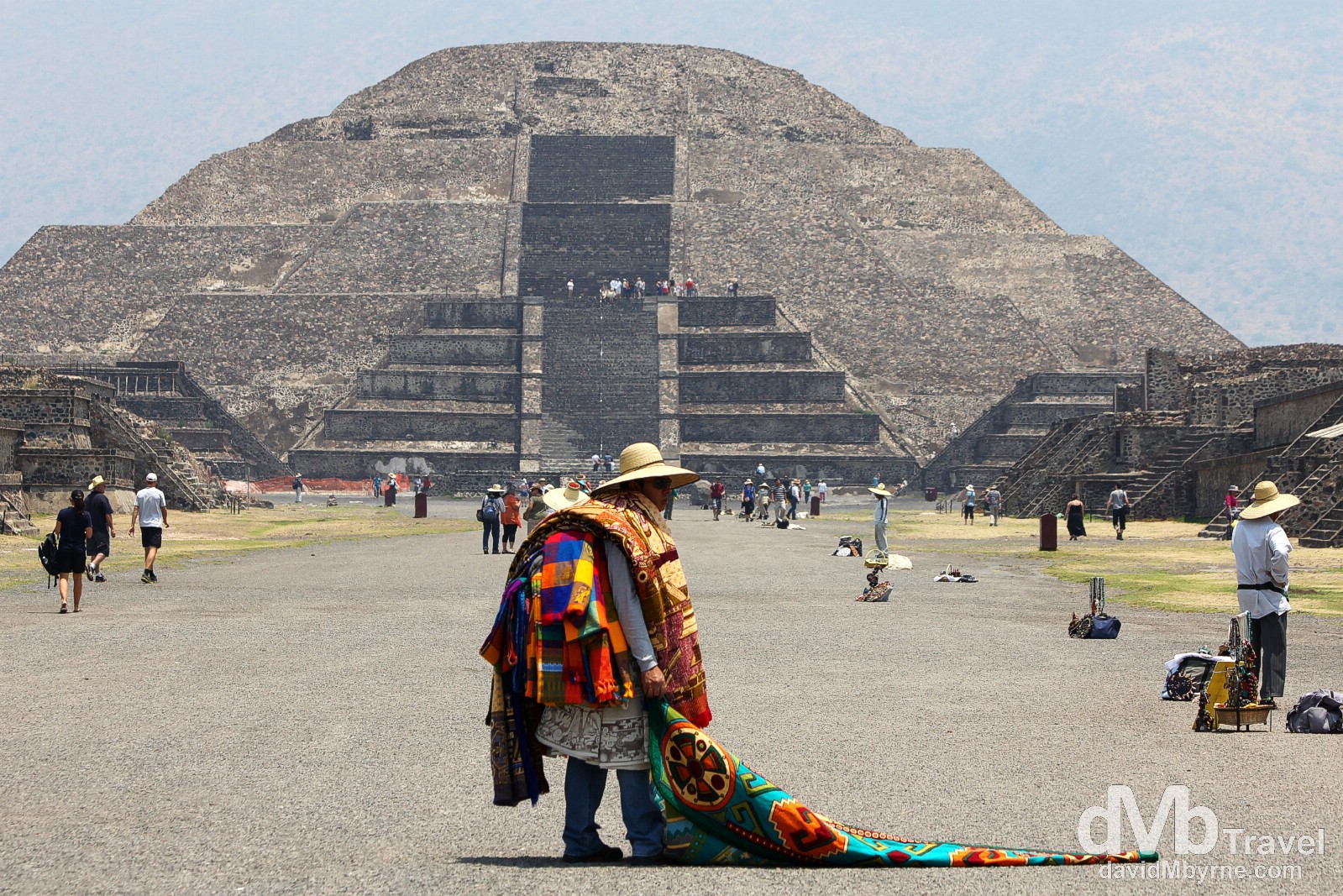 A hawker in full view of the Piramide de la Luna (Pyramid of the Moon). The second largest structure in Teotihuacan, the Pyramid of the Moon sits at the northern end of Calzada de los Muertos (the Avenue of the Dead), the main monument in a larger ceremonial precinct called Moon Plaza. As with the larger Piramide del Sol (Pyramid of the Sun), construction started in around 100 AD & it was built in 7 overlapping phases, each of which added to the structures size, with phases 6 & 7 occurring in around 350 AD, a time that corresponds to city’s most prosperous period. Teotihuacan, Mexico. April 29, 2013. 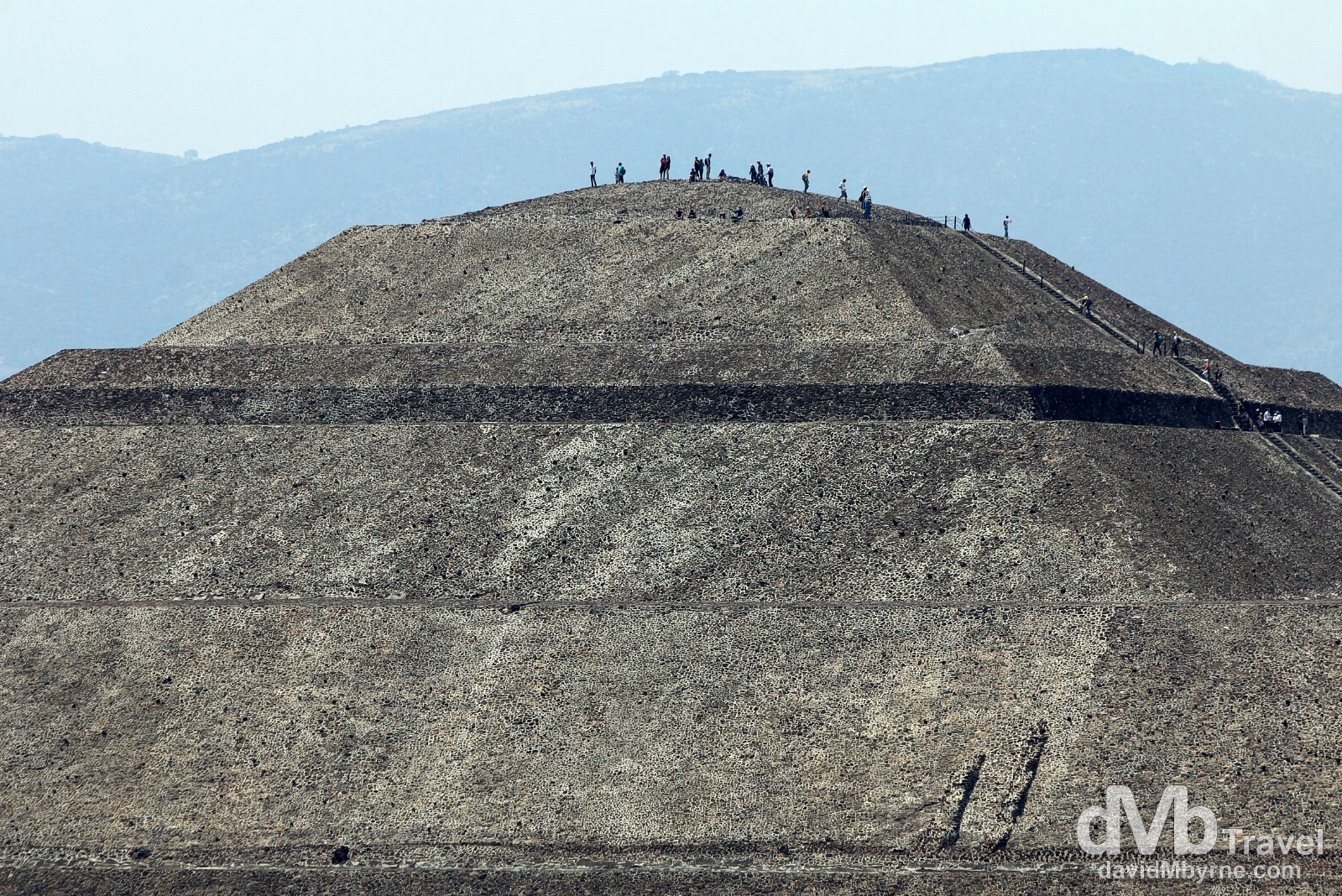 An iPod panorama of Teotihuacan. The city, which spread over 20 square kilometres, was abandoned during the sixth century – it is speculated that the city residents relocated to a more sacred location. It was discovered again in ruins in the 15th century by the Aztecs who named it Teotihuacan, meaning the place of Gods – the Aztecs believed this to be a sacred place. Today the site is a hive of ongoing research into its past, in an attempt to unlock some of its remaining mysteries, and is also one of Mexico’s most poplar tourist sites. Teotihuacan, Mexico. April 29, 2013.