There’s some credence to the opinion that Caribbean islands are like Buddhist temples – once you’ve seen one you’ve seen them all. They all seem to share a similar makeup, all seem to be cut from the same breezy laid-back beach, swaying palm tree, colourful, Rasta-heavy, rum-swigging cloth, not surprising really given they occupy the same geographical region. All that said, & for whatever reason, some islands resonate with folk more than others. Take St. Lucia for example. I’d never been prior to a few days ago but I knew before setting out on this melanoma-inducing, wallet-busting Caribbean island hop I’m presently enjoying that I wanted to visit the island regardless of how expensive it was going to be to get there & experience the St. Lucian way of things for few days. St. Lucia was always going to be on the itinerary, always going to be a hop on the journey south towards South America. Why? I’ve no idea. I just knew that of the Caribbean islands to bypass, St. Lucia was not going be be one of them. I was going to visit come hell or high water. So I did. And it was awesome. 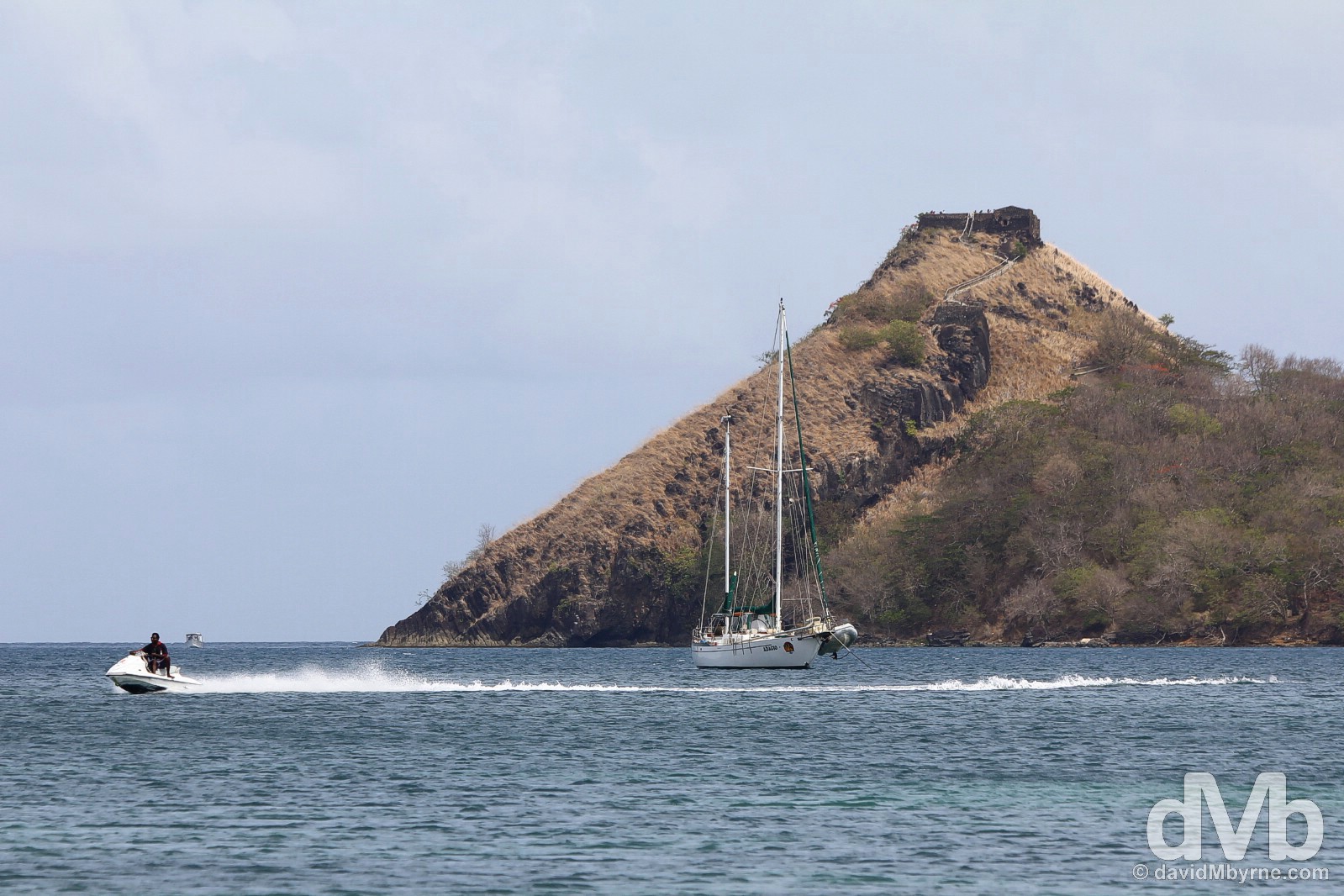 St. Lucia’s coastal topography is such that it boasts some of the finest natural harbours in the Caribbean, making it a popular regional stop with the yachting fraternity (‘What what?’). One of the island’s largest sheltered bays is Rodney Bay in the northwest of the island, with boats in repose ever-present. It was the village of Gros Islet on the shores of Rodney Bay that I called home while on the island and it was from the grounds of my guesthouse that I captured this image showing St. Lucia’s distinctive Pigeon Island, which marks the northern extreme of the bay’s arc, in the background. Rodney Bay, St. Lucia, Lesser Antilles. June 16, 2015.

Bay Guesthouse
It rained quite a bit while I was here in St. Lucia. It’s the June to November rainy season you see, which is also, and not surprisingly, a quiet time for the island (although I can’t envisage a place like St. Lucia ever being busy). They say it’s also the hottest time of the year but that trade winds tend to keep things bearable. Those winds certainly hit the veranda of my Bay Guesthouse apartment. I spent the majority of my time on the island on the breezy veranda staring out over the vast expanse of the island’s Rodney Bay which the guesthouse shamelessly juts into, a location that I doubt many, if any, of the island’s numerous exclusive 5-star all-inclusive resorts could better.

Just like Dominica (& the rest of the Lesser Antilles islands), the Caribbean-conquering Spanish were happy to ignore little St. Lucia as it housed hostile locals – the Kalingo – & had no gold deposits from which they could profit. However, the Spanish are credited with giving the island its present-day name with the name of Santa Alouise first appearing in the late 16th century. The first European to settle here was a French pirate, Francois Le Clerc, a.k.a. Wooden Leg. Using Pidgeon Island as a base he attacked passing Spanish vessels. The English arrived as early as 1605 but not out of choice – they were blown off course en route to Guyana on the northestern coast of South America. They – the English – didn’t find the island to their liking; of the 67 who landed only 19 were still alive one month later and they were forced to flee the Kalingo in a canoe. The French arrived in 1651 shortly after which began a long series of hostilities with the British; the two nations fought no less than 14 times over the next 160 years for control of the island, primarily because of its strategic location within easy reach of the rest of the region & North America. St. Lucia was finally ceded to the Brits in 1814 with full-blown independence arriving in February 1979, 12 years after the island gained self-governing status from London. Traditionally the slave-based St. Lucian economy was agricultural mono-crop based – first sugar, then bananas. These days tourism is the island’s primary bread winner (& by a long way). Boasting award-winning hotels, resorts, and private villas aplenty, the island today is an acclaimed eastern Caribbean destination for romance, signature weddings, and once-in-a-lifetime honeymoon experiences.

Award-winning 5-star hotels, resorts, and private villas. That’s glossy brochure St. Lucia. And it’s never far away; even from the a small, colourful fishing village of Gros Islet in the middle of Rodney Bay you can see plush, multi-level villas pegged into the surrounding hills and mammoth, walled resorts monopolising portions of Rodney Bay’s sand. 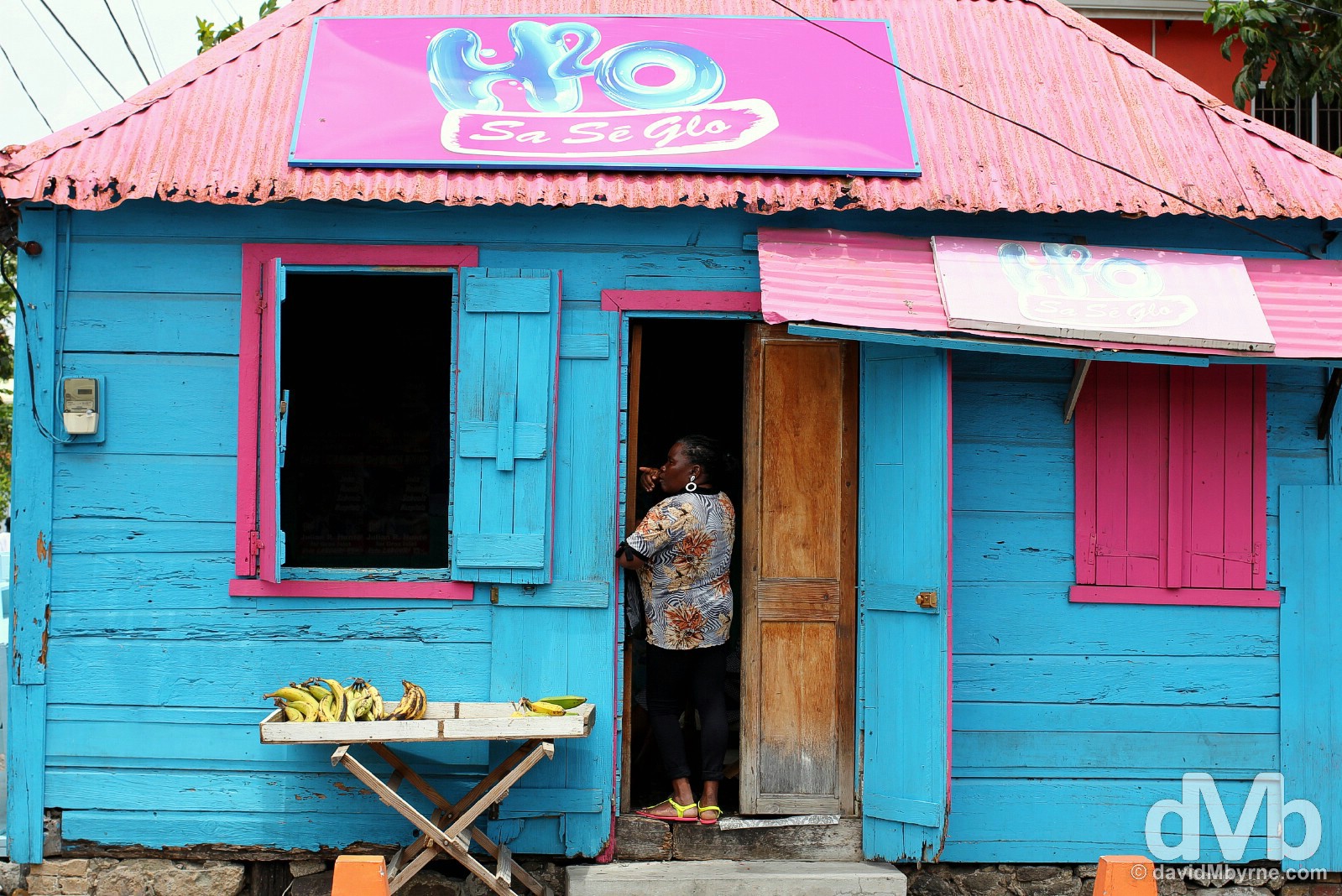 But Gros Islet isn’t going to make it into any for-export tourist literature. Oh no. It’s a typical Caribbean fishing village with a laid-back vibe, friendly locals and colourful brick-&-wooden buildings, many of which look like they’ll struggle when the next tropical gale blows through. I loved it here; outdoor BBQs abound & rustic 3-beers-for-EC$10 (€3.20) bars blasting country music (yes, bizarrely dreadlocked St. Lucians LOVE their country music) meant I found my comfort zone in Gros Islet without even looking for it.

The capital. A bustling port city on a natural harbour (of course) & the island’s commercial centre (of course). It’s a little more frenetic, a little more unkempt than Roseau, the Dominica capital. But it is also that much larger. I paid a few visits, catching the minibus for the 15-minute ride from Gros Islet never forgetting to wish my fellow passengers a good morning/afternoon/evening upon boarding the bus – it’s the done thing in St. Lucia so you best conform. 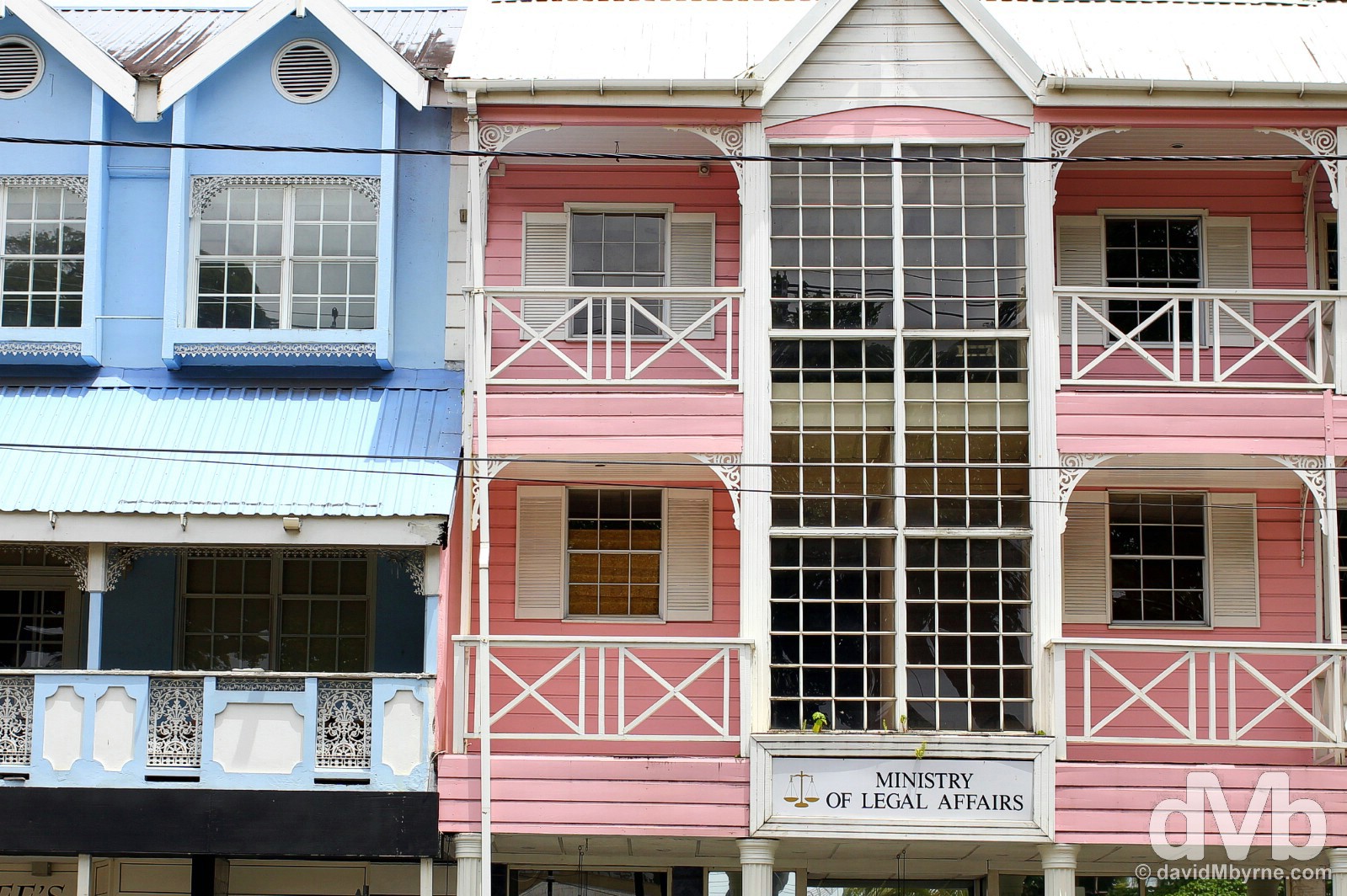 I liked the Castries Central Market (it was more Asian than Caribbean in its freneticism). I loved the airy Caribbean cum African (well hello dark Jesus) Cathedral of the Immaculate Conception. And I enjoyed the serenity of the town’s central square, named after local boy did good Derek Wilcott, St. Lucia’s famed poet/playwright & 1992 Nobel Laureate in Literature. However, the highlight of the St. Lucian capital for me was, and just like is was in the Dominica capital of Roseau before it, the colourful wooden architecture. This is a picture taken on Bourbon Street on the western side of Derek Walcott Square, probably the most picturesque row of wooden structures in town. Castries, St. Lucia, Lesser Antilles. June 14, 2015.

While the English officially took control from the French in 1814, it wasn’t until 1842 that English became the official language. Today a French-based Creole is also widely spoken (just like in Haiti), a result of the island’s dual British-French heritage, & a lot of the island’s town names are French, including Soufriere in the southwest of the island, about an hour on the minibus from Castries. This is the working-class heart & soul of the island and it was also St. Lucia’s first permanent settlement – the French settled it in 1746. And if that wasn’t enough, Soufriere also boasts St. Lucia’s main draw, the majestic natural twin towers of The Pitons, two steep, vegetation-covered volcanic spires rising right out of the azure Caribbean Sea. 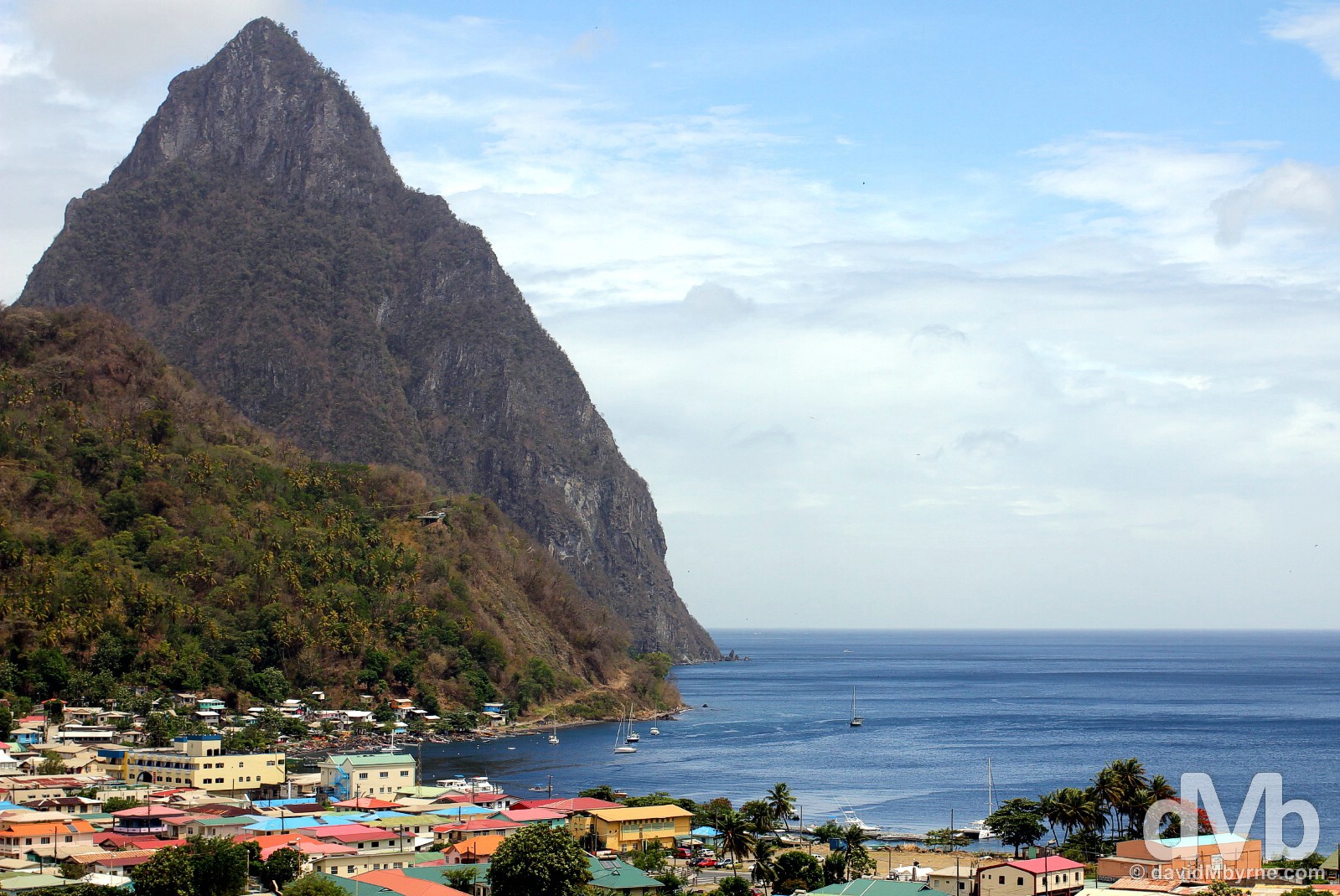 St. Lucia’s unmistakable & prized natural landmark, the Pitons, Petit (743 metres, seen here) & Gros (770 metres, hidden behind Petit as viewed from this angle), are a UNESCO World Heritage site & one of the natural gems of the whole Caribbean region. The conditions yesterday when I visited were not great – it was overcast & rainy most of the day – but someone was smiling down on me when, and for a very brief period when overlooking Soufriere from the steep road into town, the clouds broke and this little corner of the island briefly shone. This is picture-postcard, tourist brochure St. Lucia; magnificent 5-star resorts & boutique hotels dot the verdant hills surrounding Soufriere, places where you can laze in your private infinity pool with guaranteed killer views of the Piton peaks. Soufriere, southeastern St. Lucia, Lesser Antilles. June 15, 2015.

The 2,909-ha site near the town of Soufriere includes the Pitons, two volcanic spires rising side by side from the sea (770 m and 743 m high respectively), linked by the Piton Mitan ridge. The volcanic complex includes a geothermal field with sulphurous fumeroles and hot springs. Coral reefs cover almost 60% of the site’s marine area. A survey has revealed 168 species of finfish, 60 species of cnidaria, including corals, eight molluscs, 14 sponges, 11 echinoderms, 15 arthropods and eight annelid worms. The dominant terrestrial vegetation is tropical moist forest grading to subtropical wet forest, with small areas of dry forest and wet elfin woodland on the summits. At least 148 plant species have been recorded on Gros Piton, 97 on Petit Piton and the intervening ridge, among them eight rare tree species. The Gros Piton is home to some 27 bird species (five of them endemic), three indigenous rodents, one opossum, three bats, eight reptiles and three amphibians. 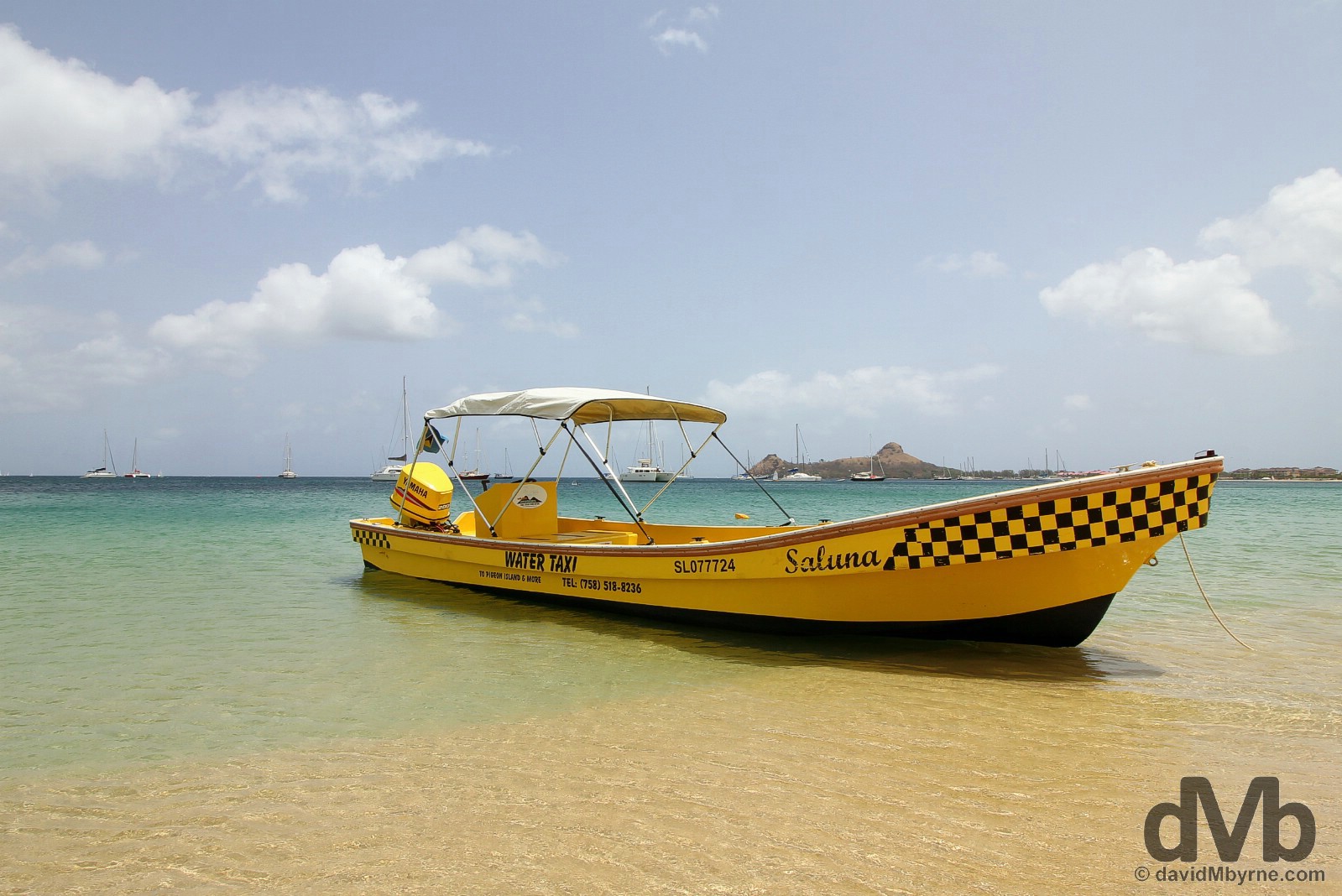 I’d been staring at it for long enough from the veranda of my Rodney Bay guesthouse so today, on my last day on the island, I make the short trek around the bay to Pigeon Island. And once there I dragged myself up to its highest point, Signal Peak. 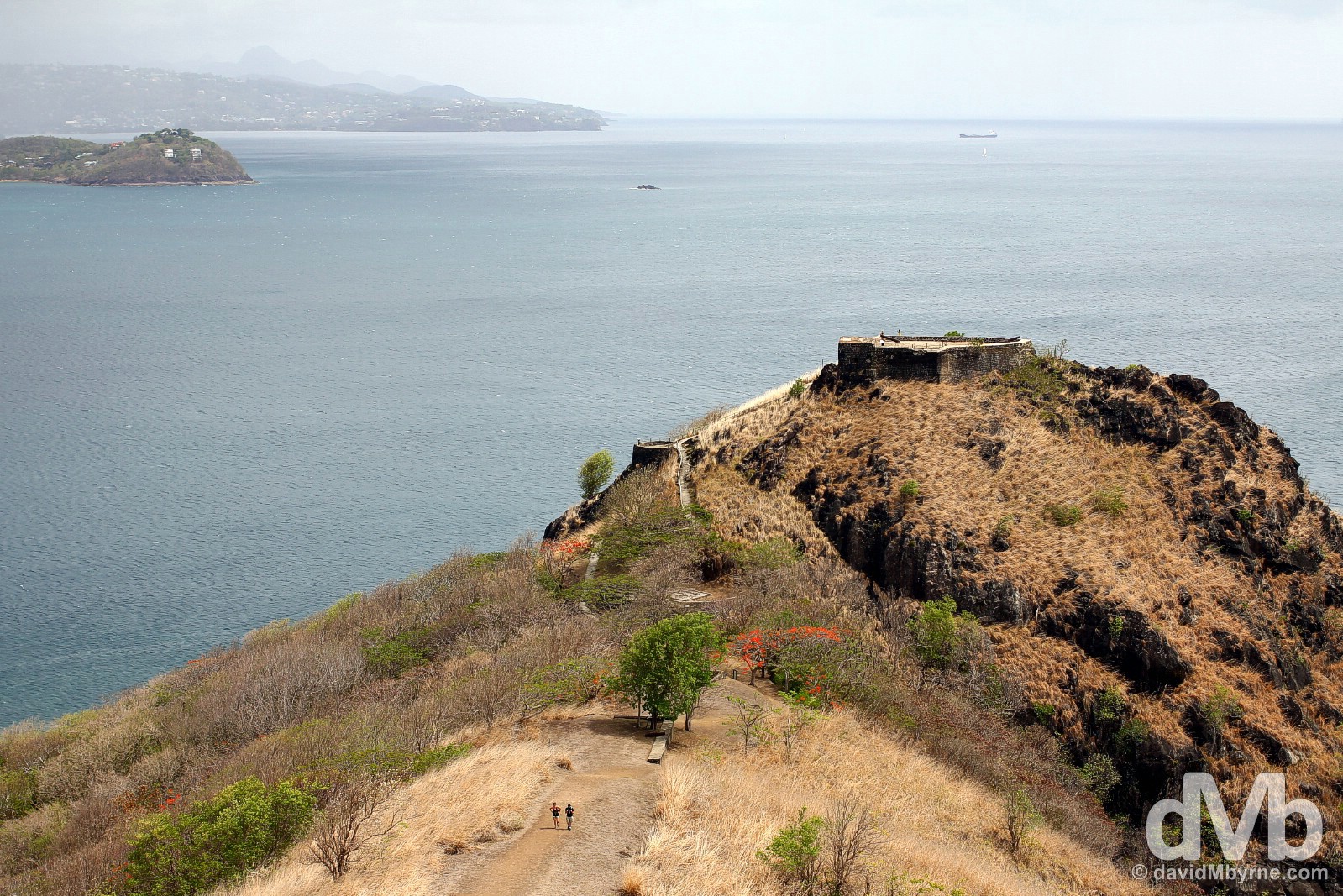 The entrance to Rodney Bay & the remnants of Fort Rodney as seen from Signal Peak on Pigeon Island, St. Lucia, Lesser Antilles. June 16, 2015.

Needless to say the history of Pigeon Island is closely tied to the feuding French & British. Having been touted by the British Admiral Rodney as an important observation and defensive site at the entrance to the bay, a fort was built here in 1778 to repel any invasion, especially from the French who were based only some 40 kilometres north of here on the island of Martinique. Not much happened over the next 150 years until the Americans set up a signal station on the island during World War II. Since then it has been converted into a National Park – Pigeon Island National Park- with a fee charged to access what remains of Fort Rodney, seen here from Signal Peak, which is basically a platform with a couple of well-weathered canons pointing out to sea. 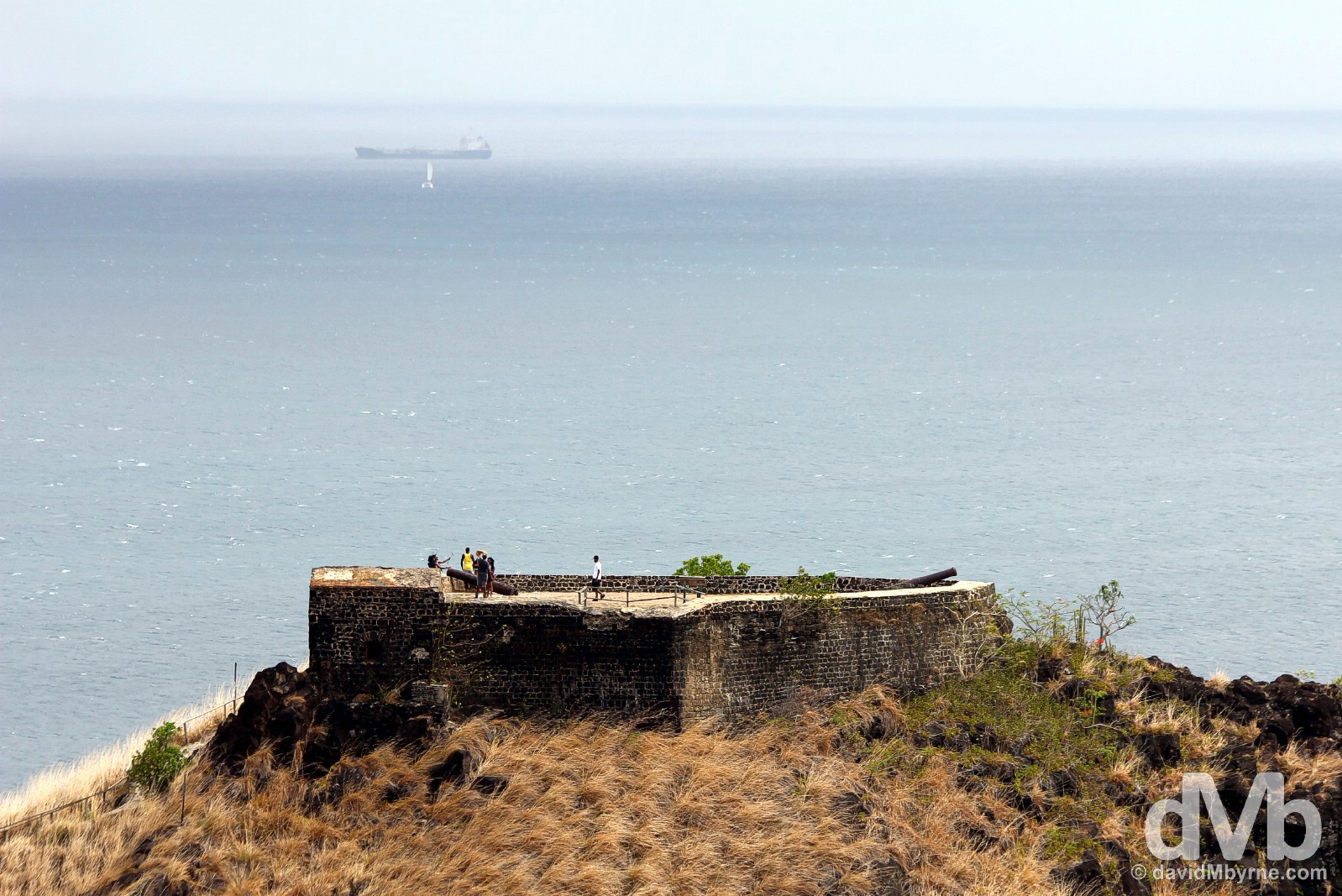 Being high on Pigeon Island isn’t about the warring fortifications from the past. It’s all about the vistas. The views of the whole of the Rodney Bay & the northwestern corner of St. Lucia are something special, a scene I tried to capture via the panorama function of my trusty iPod. Rodney Bay & northwest St. Lucia as seen from Fort Rodney on Pigeon Island. St. Lucia, Lesser Antilles. June 16, 2015.

St. Lucia || A Wrap
Country Music bars in rustic, colourful fishing villages, towering UNESCO-listed volcanic peaks piercing the azure waters Caribbean Sea, & an age-old fort protecting the entrance to one of the largest sheltered bays in the Caribbean (to say nothing of the mountainous interior of the island that I didn’t visit having gone all Sydney Possuelo like in Dominica prior to my arrival on St. Lucia). And you thought St. Lucia was only yachts, flashy resorts, glamorous weddings & once-in-a-lifetime honeymoons? It’s OK, I did too. But then I visited. You should too.