“… Prague… is overrun. It’s beset. And it’s only March, granted only for a few more hours. I can only imagine what it’s like here these days at the height of summer.”

Prague is overrun. The city is beset. By tourists. I couldn’t believe the amount of people in its historic Old Town Square yesterday afternoon having just arrived in the city from Vienna, Austria. It felt like I was in the crowd at a concert. A sold-out, no-chance-of-a-ticket concert. It was bedlam. People everywhere, performers/buskers, hawkers, beggars, & of course those annoying tour guides with their silly this-way flags. 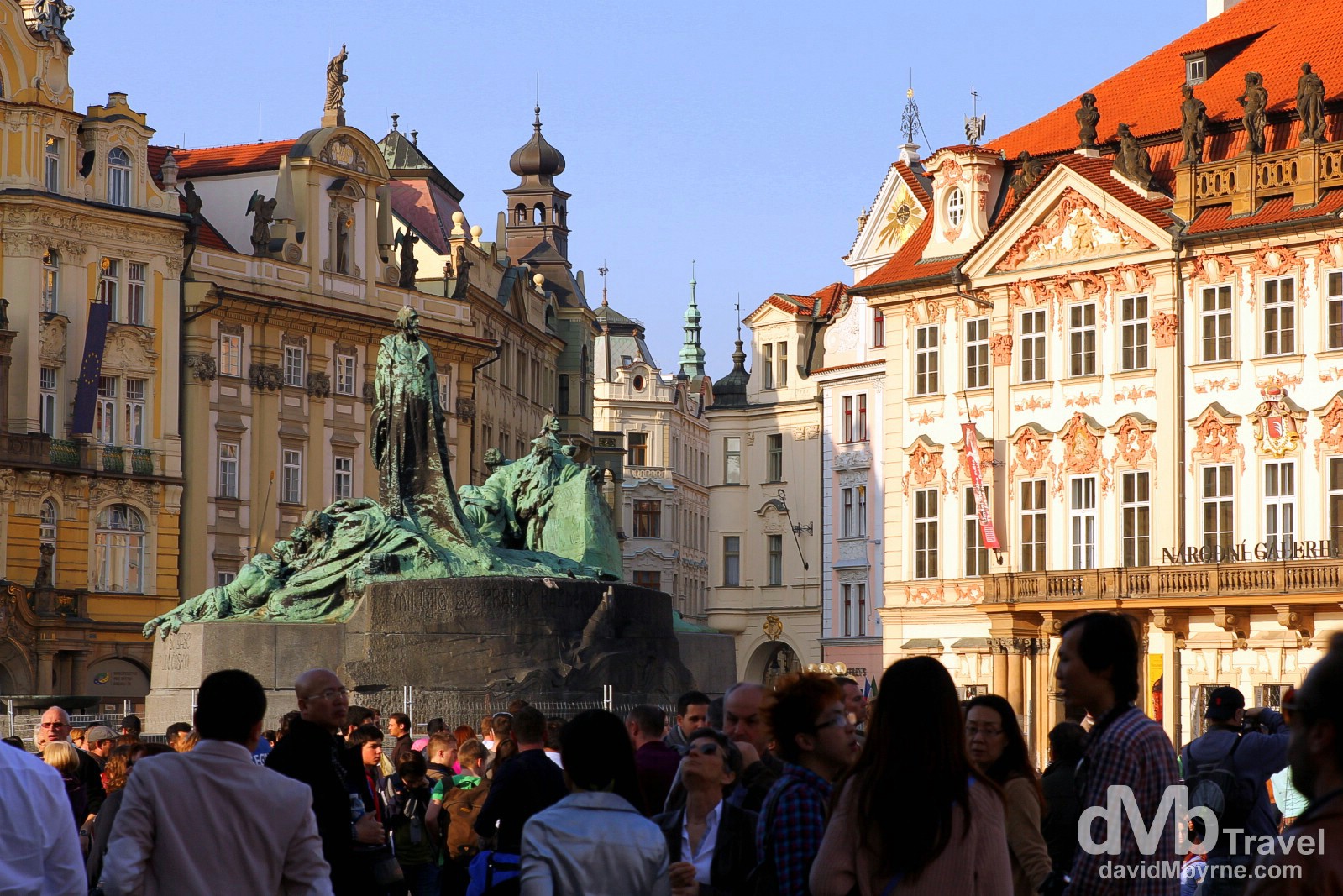 The Jan Hus statue, & loads of people, in Old Town Square, Prague. In 1992, Prague’s historic centre was added to the list of UNESCO World Heritage Sites. Its centre is marked by the Old Town square which houses a statue of Jan Hus, a Czech religious thinker, philosopher and reformer. The Roman Catholic Church considered his teachings heretical and had him burned at the stake in 1415. It wasn’t until 1999, a mere 5 centuries after his death, that the church, whoops, apologized for the execution. The statue was erected on July 6, 1915, to mark the 500th anniversary of his death. Prague (

Swans on the Vltava River nearing sunset with Karluv most (Charles Bridge) in the background. Prague,… http://t.co/U4cMTVIXDZ

Yesterday was a gorgeous afternoon (today not so much) and it was a Sunday so I thought OK, a weekend crowd. But no. Today was just as busy. Prague, the golden, mystical medieval Central European gem of cobbled streets, riverside parks & a smorgasbord of stunningly wonderful architecture, is overrun. It’s beset. And it’s only March (granted only for a few more hours). I can only imagine what it’s like here these days at the height of summer. 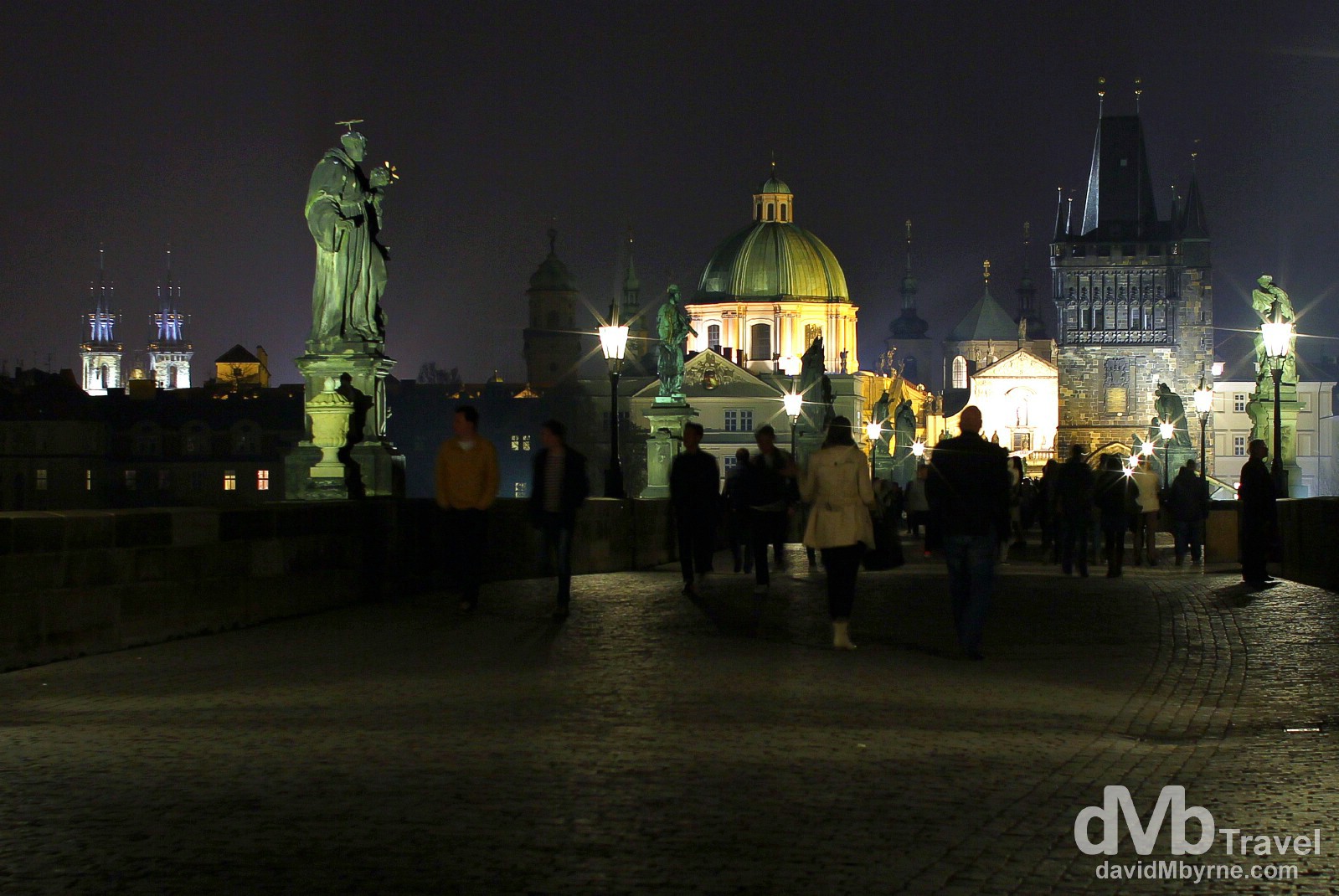 Prague’s two primary districts are the medieval castle district and the Old Town area. They are separated by the Vltava River which is crossed by Karluv most (Charles Bridge). The bridge was built in 1357 under the auspices of King Charles IV & was, until 1841, the city’s only bridge. This solid-land connection made Prague important as a trade route between east and western Europe. In a city of numerous sights, the Charles Bridge, alive most times of day with painters, kiosks and buskers of all kind, is probably the city’s most famous sight and everyone eventually gravitates towards it. The 516-metre-long, 10-metre-wide bridge balustrades are graced by 30 replicas (the originals started to be moved to the National Museum in 1965) of (mostly) baroque statues, erected between 1683 and 1714 & depicting various Saints and Patron Saints venerated at that time. Prague, Czech Republic. March 31, 2014

The #Museum of #Communism in #Prague is right beside the city's biggest #McDonald's. Now that's #irony. #travel #dMbTravel #czechrepublic

I commented a while back in Venice, Italy, on what I perceived to be the abnormally high out-of-season tourist numbers in that city but I never expected to see it here in Prague. Yes, Prague is a tourist magnet, of course it is, but make no mistake, tourism is alive and well in this part of the world. They – the tourists, me included of course – are here to ogle at the real-life fairy tale that is Prague. It really is quite the place. An architectural nirvana, a city full of Gothic, Renaissance & Art Nouveau masterpieces that mercifully escaped World War II damage. It’s my third visit here, first since 2006 (Prague in 2006), & each & every time I’ve had the same feeling – that I’m walking around some kind of fabricated Medieval Land in a theme park. Except I’m not. It’s all real. Very real. 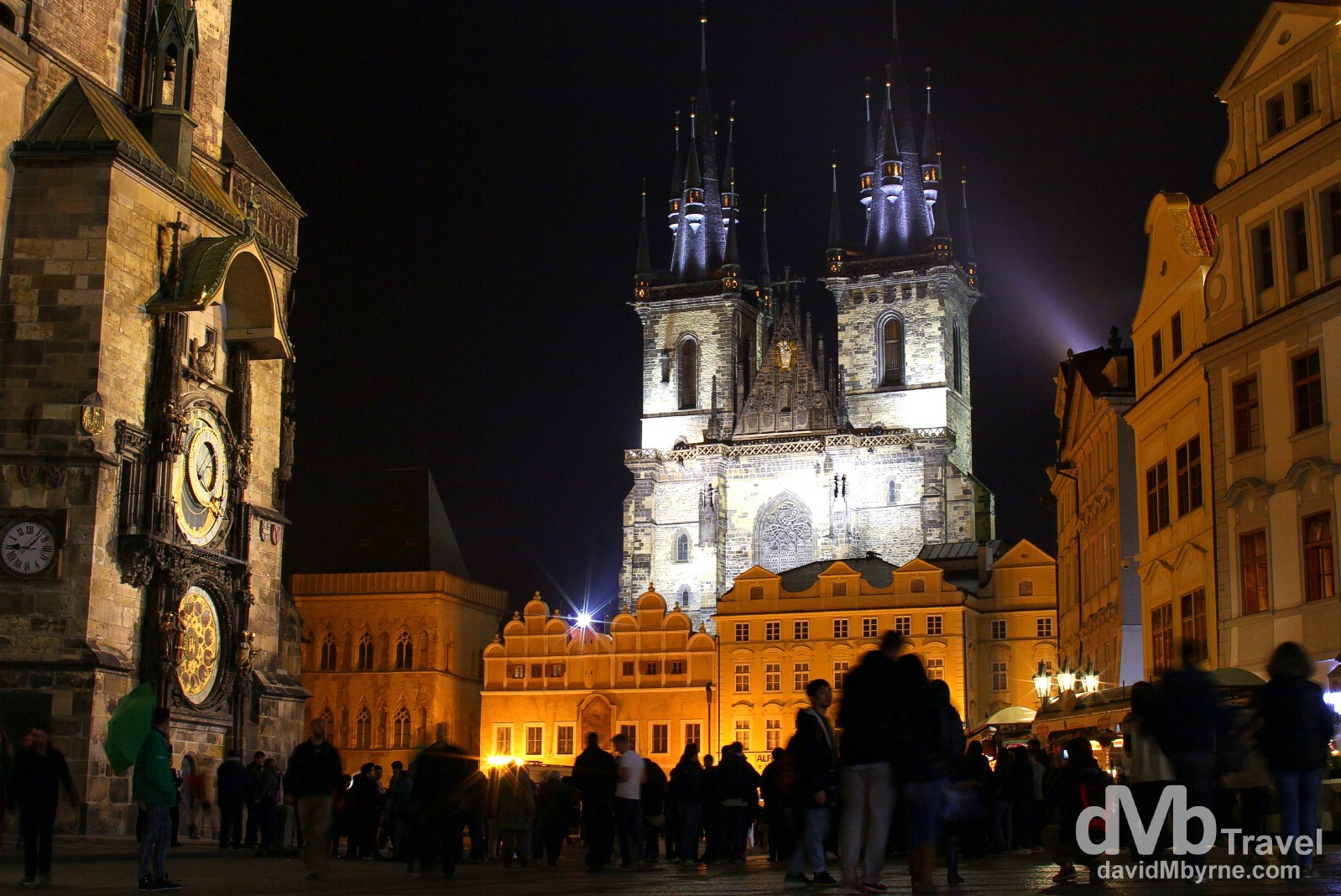 Old Town Square at night. Prague’s famous medieval astronomical clock of the Old Town Hall clock tower can be seen to the left of the image. The clock attracts quite a gathering of admirers on the hour, every hour, to witness its parade of apostles and other figures, including a bell ringing skeleton (seriously). I remember watching the spectacle early in the morning on my previous visit to Prague in March of 2006. At the time I was one of only a few onlookers. Not so today. The clock itself is comprised of three parts, the oldest of which is the Astronomical Dial, the top dial of the two on the tower. Dating from 1410, it represents the position of the Sun and Moon in the sky and displays various astronomical details. The so-called Walk of the Apostles section above the dial, under the protruding arch, sees four figures that flank the clock set in motion, with Death, represented by a skeleton, striking the time. All 12 statues of the Apostles are present at noon, the only time they all make an appearance. The bottom dial of the astronomical clock is the Calendar Dial with medallions representing the 12 months. Oh, and the mammoth twin steeples in the background are those of the Gothic Tyn Church, Old Town Square’s most dominant structure. Old Town Square, Prague, Czech Republic. March 30, 2014

Almost made me blush. Feeling the love from #Starbucks here in #prague #czechrepublic @ Starbucks http://t.co/XIxXlCMfj0 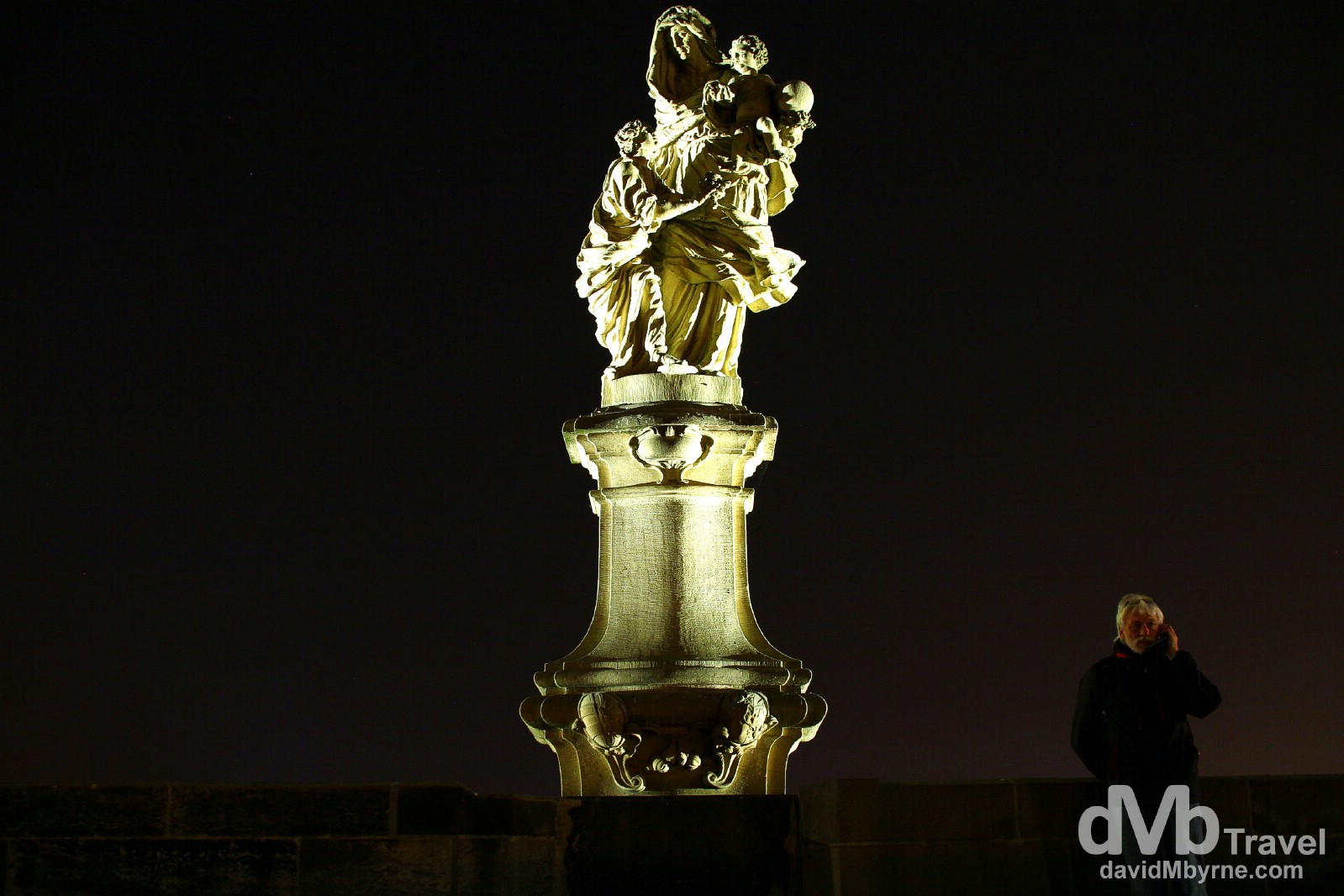 Today wasn’t a great day weather wise; it was misty & overcast. All that means my favourite images from this trip to Prague are mostly nighttime captures, just like this one of a man standing by one of the statues on the Karluv most (Charles Bridge). Prague, Czech Republic. March 30, 2014

I've seen it all now. #ryanair giving away #free food & booze before the flight to #Dublin #traveltuesday #Airport pic.twitter.com/qeWXjsYbrJ