Image || The turquoise waters of the Moraca River as seen from the Most Blaza Jovanovicain in Podgorica, Montenegro. April 21, 2017.

I won’t lie; first impressions of Montenegro were not good. It was bucketing down when taxiing to the terminal of Podgorica Airport. I almost didn’t want to subject myself to it. It was early. It was glum. It was cold & I was tired, a consequence of having spent the previous night trying – and failing miserably – to sleep in London’s Stansted Airport, the only way I deduced that I’d guarantee making the 06:55 Ryanair departure to the Montenegrin capital, one of the few direct flights from my corner of Europe to this corner of Europe at this time of the year. I had limited time in Montenegro so I was hoping the conditions would improve, and fast; with the scenery on show in these parts you really need good weather to do the country justice. The weather did improve – on and off – and I found myself leaving Montenegro some days later for neighbouring Kosovo wondering why it had taken me so long to point my camera at this particular Balkan gem. 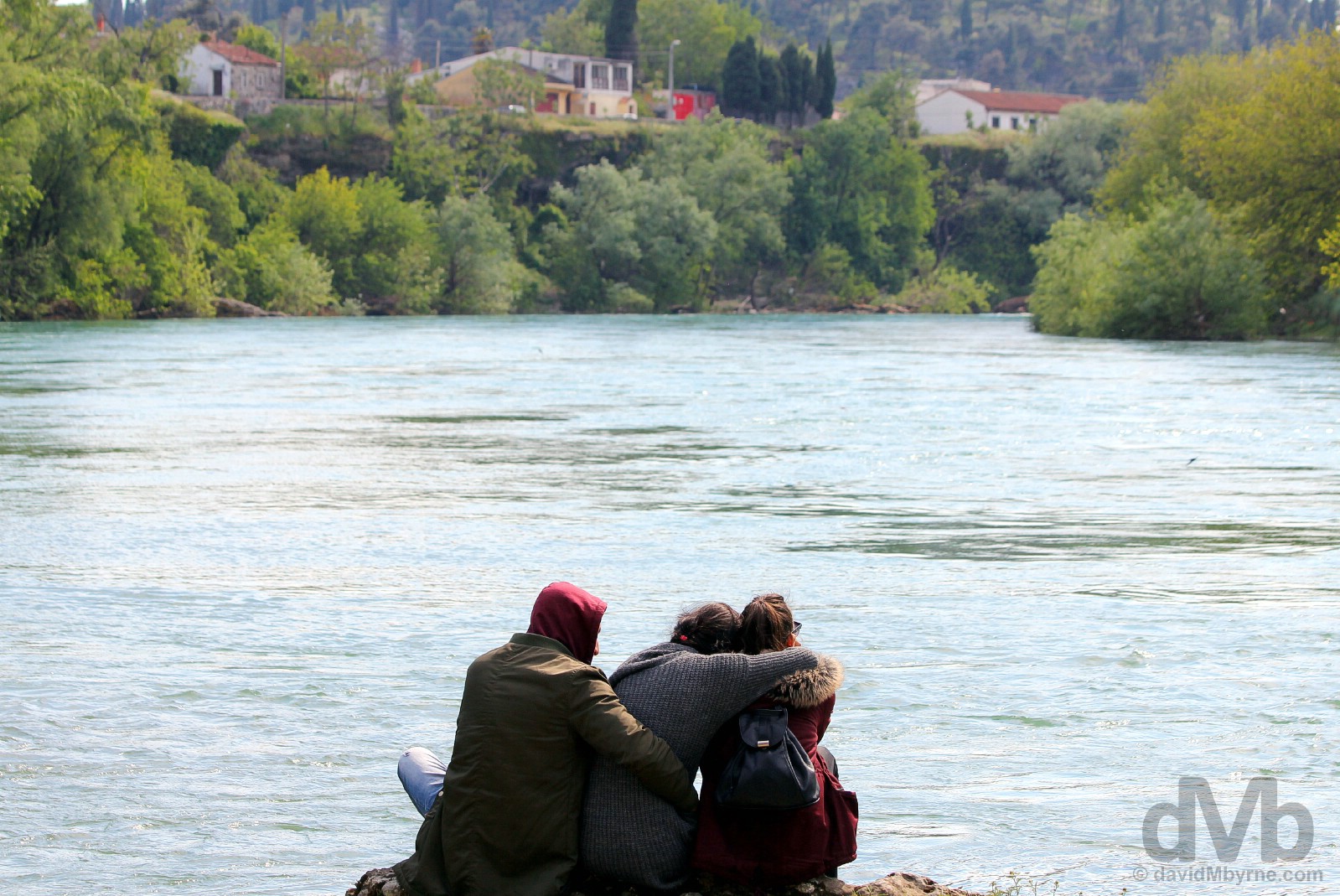 Friends. Sitting by the edge of the fast-flowing Moraca River in Podgorica, Montenegro. April 21, 2017. 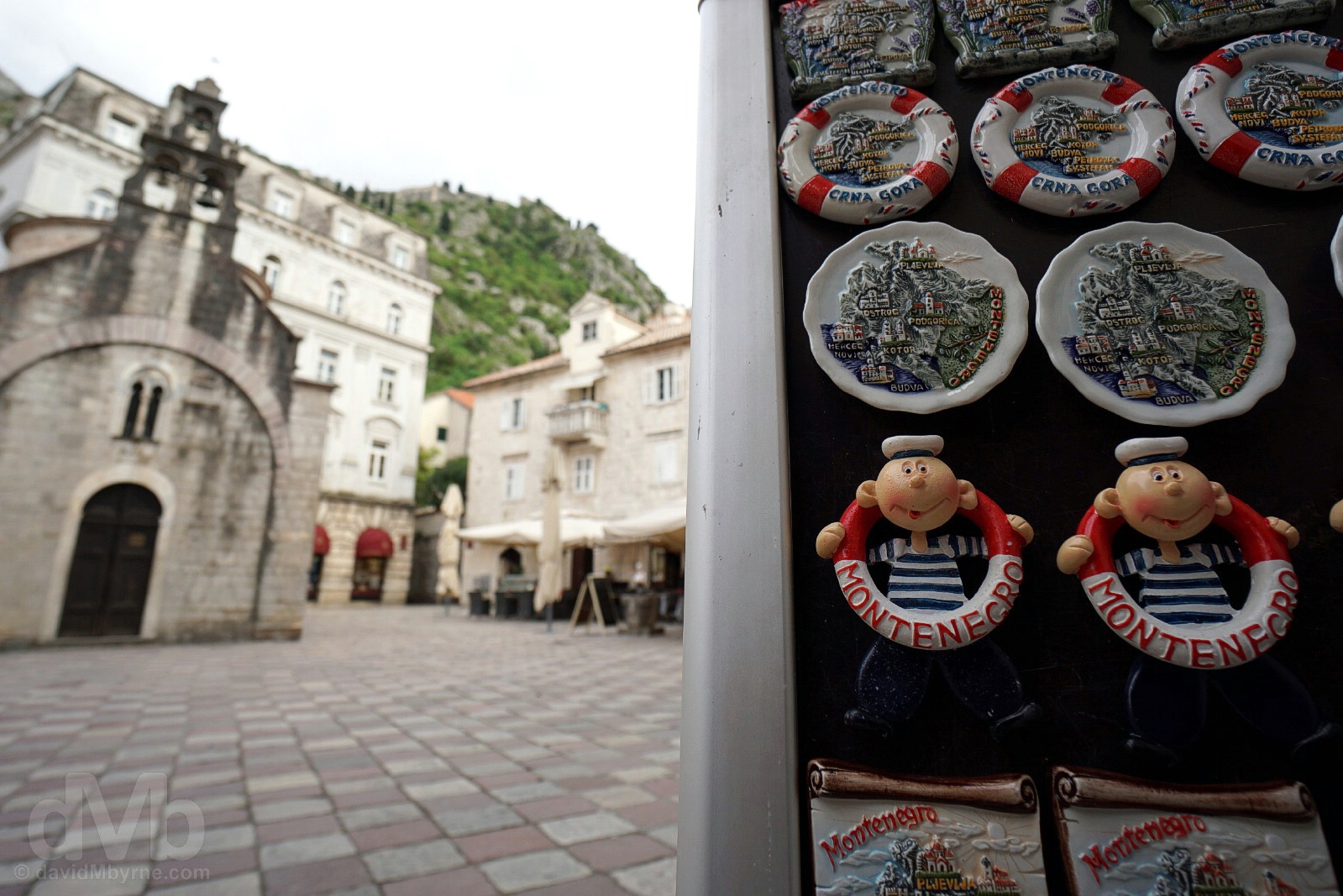 The fun side of travel. I’m 6 hours into an 8-hour wait for an overnight, cross-border bus to Pristina, Kosovo, a strange city I’ll arrive into at stupid o’clock in the morning (5 a.m. all going to plan). I’m in a smoky café (the Montenegrins could do with sorting that disgusting societal detail out in a hurry) in Podgorica, a European capital I’d say the majority of people have never heard of before. I’m tired, I’m cold (it shouldn’t be this chilly here this time of year) & I’d love a shower (and access to the hire car that I returned earlier today). This is the fun side of travel. At least I have coffee & awesome travel photography from the last three days in Montenegro, including today in Podgorica, to help pass the time.

LAKE SKADAR NATIONAL PARK || Lake Skadar National Park as seen from the outskirts of the village of Virpazar, Montenegro. April 21, 2017. || I pulled of E80 and stopped off by the edge of Lake Skadar en route from Budva to Podgorica, passing through the tiny fishing village of Virpazar in the process. Spilling over the border with neighbourng Albania (two-thirds of it are in Montenegro), this is the Balkan’s largest lake. A popular escape for nature lovers, this is one of Europe’s top bird habitats, a 400 km² Montenegrin swath of it protected since 1983 as Lake Skadar National Park. The dolphin-shaped lake is picturesque, if a bit reed-choked here along this section of its western shore, but the distant string of snow-capped peaks in the particular caught my attention, peaks I’d cross late in this day en route from Podgorica to Pristina, Kosovo.

While I’m glad I stopped by, there’s really not a whole lot to see in the Montenegrin capital of Podgorica, the few hours it took me this afternoon to walk a loop of the city from the bus station and back again more than sufficient time to sample what is on offer. The city, Europe’s newest capital city and one of its smallest, doesn’t attract too many of my ilk, that much plainly obvious. Yes, it’s a bit rough around the edges in places, but it’s clean(ish), has a young & friendly populace, has some photo-worthy bridges (yes, bridges), a positively glowing turquoise river, a lot of trees, a centuries-old Clock Tower that I forgot to photograph, a big church – the Cathedral of the Resurrection of Christ – that I didn’t see, a nice pedestrianised region for eating & drinking (Hercegovacka) and… well, that’s about it really. Suffice to say, people don’t come to Montenegro for its capital city charms. If they come at all they do so to sample the country’s rugged mountainous interior, its walled medieval towns and its string of Adriatic Coast beaches. I know I certainly did, passing through the capital a few times in the process. 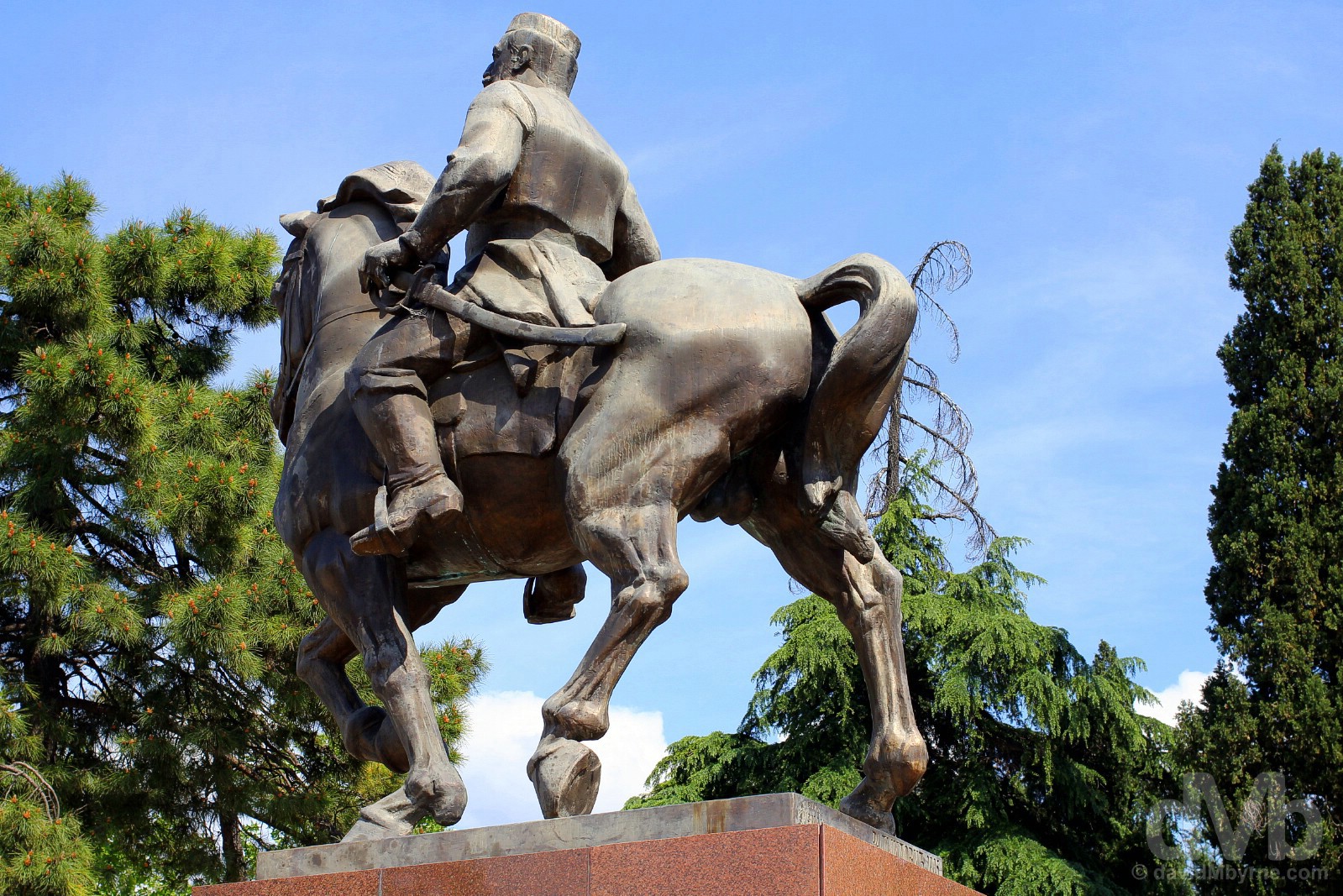 Monument to King Nikola, Kraljev Park, Podgorica, Montenegro. April 21, 2017. || ‘Oh look, a statue, something to photograph,’ I though when meandering through Podgorica’s unkempt & Ribnica River-hugging Kraljev Park. Lacking much in the way of information to appease/educate the likes of me, I was later to discover that it’s a monument to King Nikola, the last King of Montenegro. Sovereign Prince from 1860 and King from 1910 to 1918, he went into exile in France as a result of a World War I annexation of Montenegro by Serbia, dying in Antibes in 1921. His statue sits opposite the Parliament Building by the of Bulevar Svetog Petra Cetinjskog, a big Podgorica artery that leads down to the city’s natural showpiece, the gorgeous Moraca River. 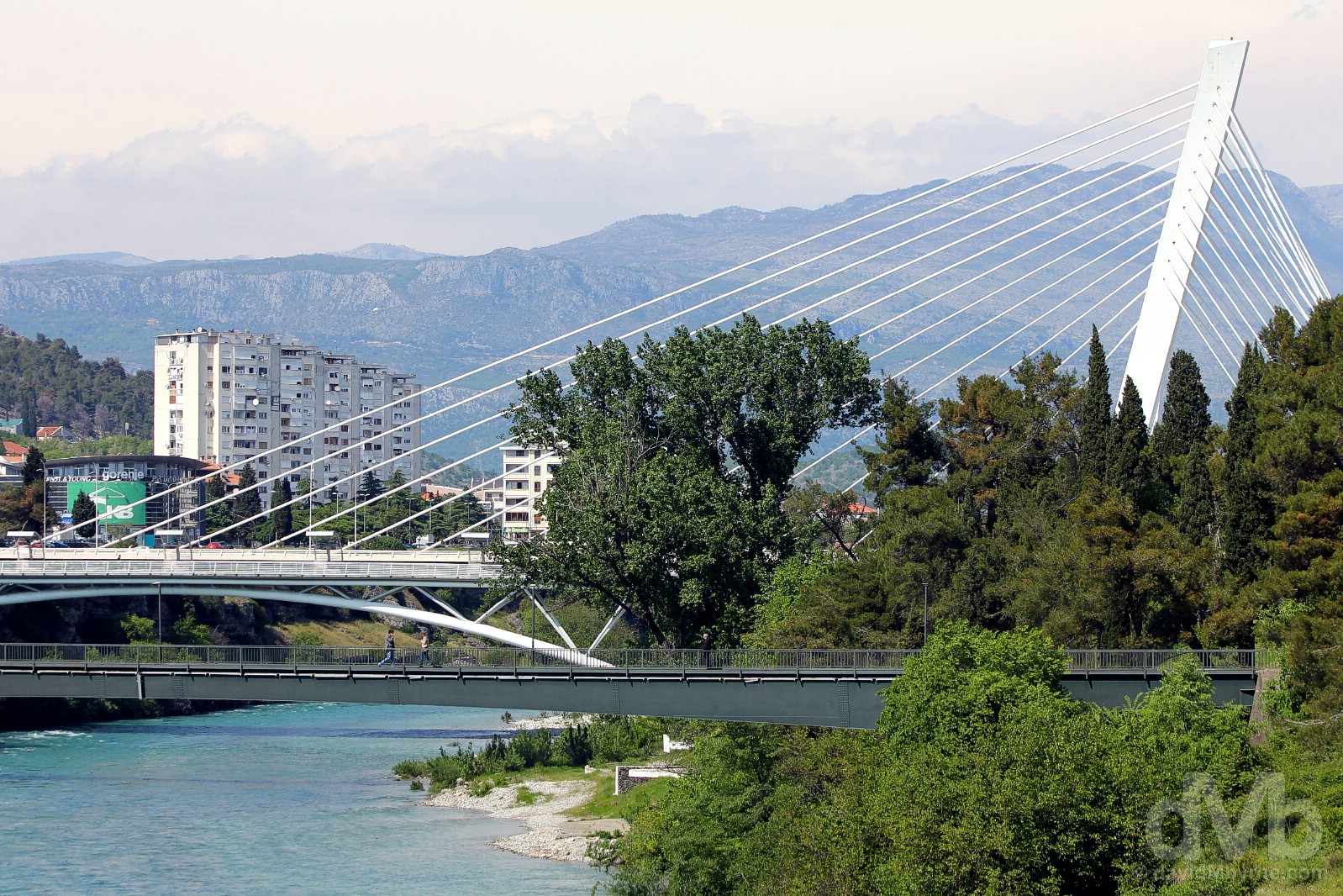 The cable-stayed Moskovski Most (Millennium Bridge) as seen beyond the pedestrian Most Gazela over the Moraca River in Podgorica, Montenegro. April 21, 2017. || Rough Guides claim that the turquoise waters of Podgorica’s Moraca River ‘looks positively drinkable.’ The the fast-flowing waters do indeed look inviting, but ‘drinkable’ I’m not too sure. Seen here upstream from the centre of Most Blaza Jovanovica, and beyond the the pedestrian Most Gazela, is both the architectural highlight of the city and its most prominent landmark, the Moskovski Most (Millennium Bridge). Costing a cool 7 million euro, the bridge opened on July 13, 2005, Montenegro’s National Day. It’s 173 metres long and is held in place 50+ metres above the waters of the river with the aid of 12 cables. 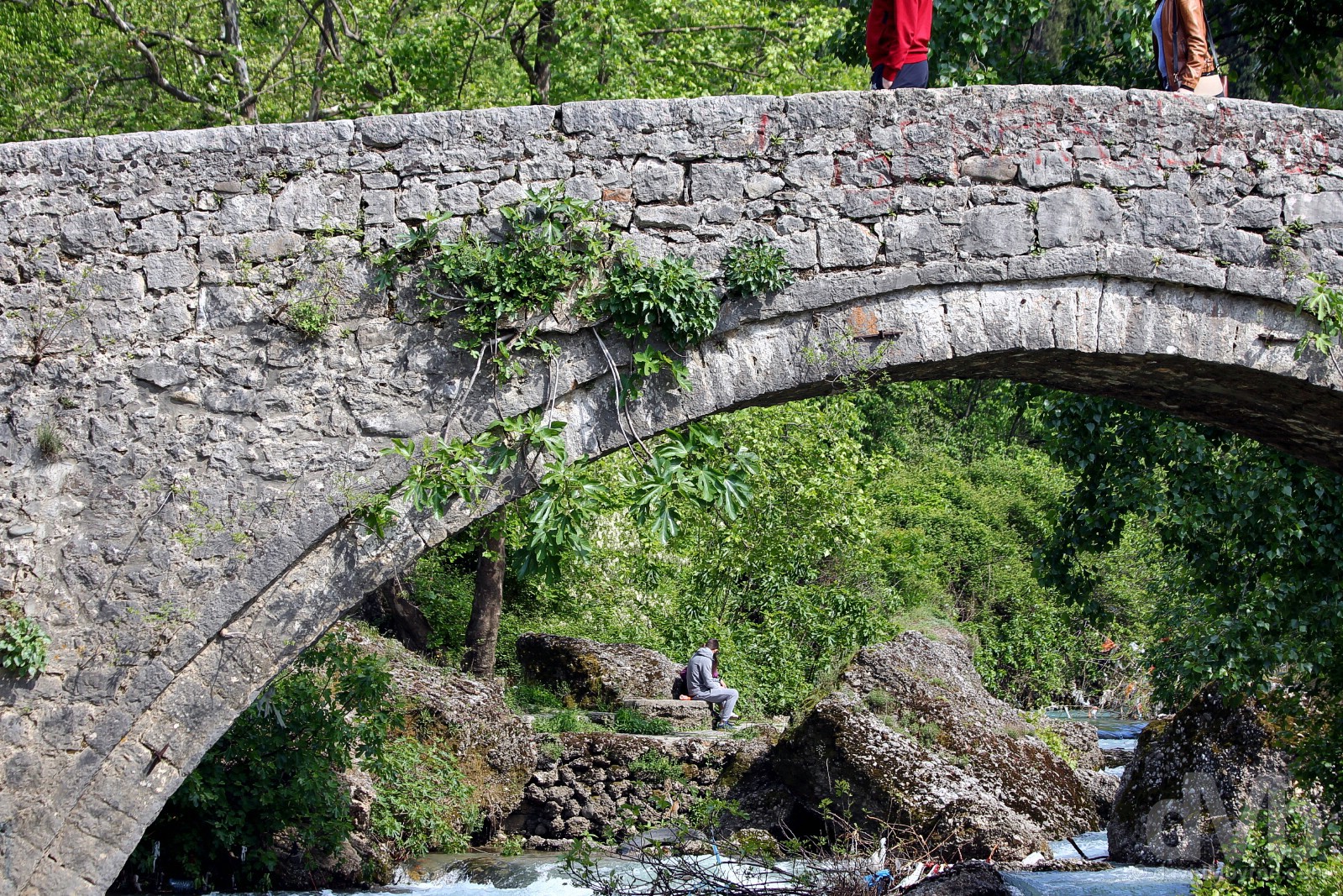 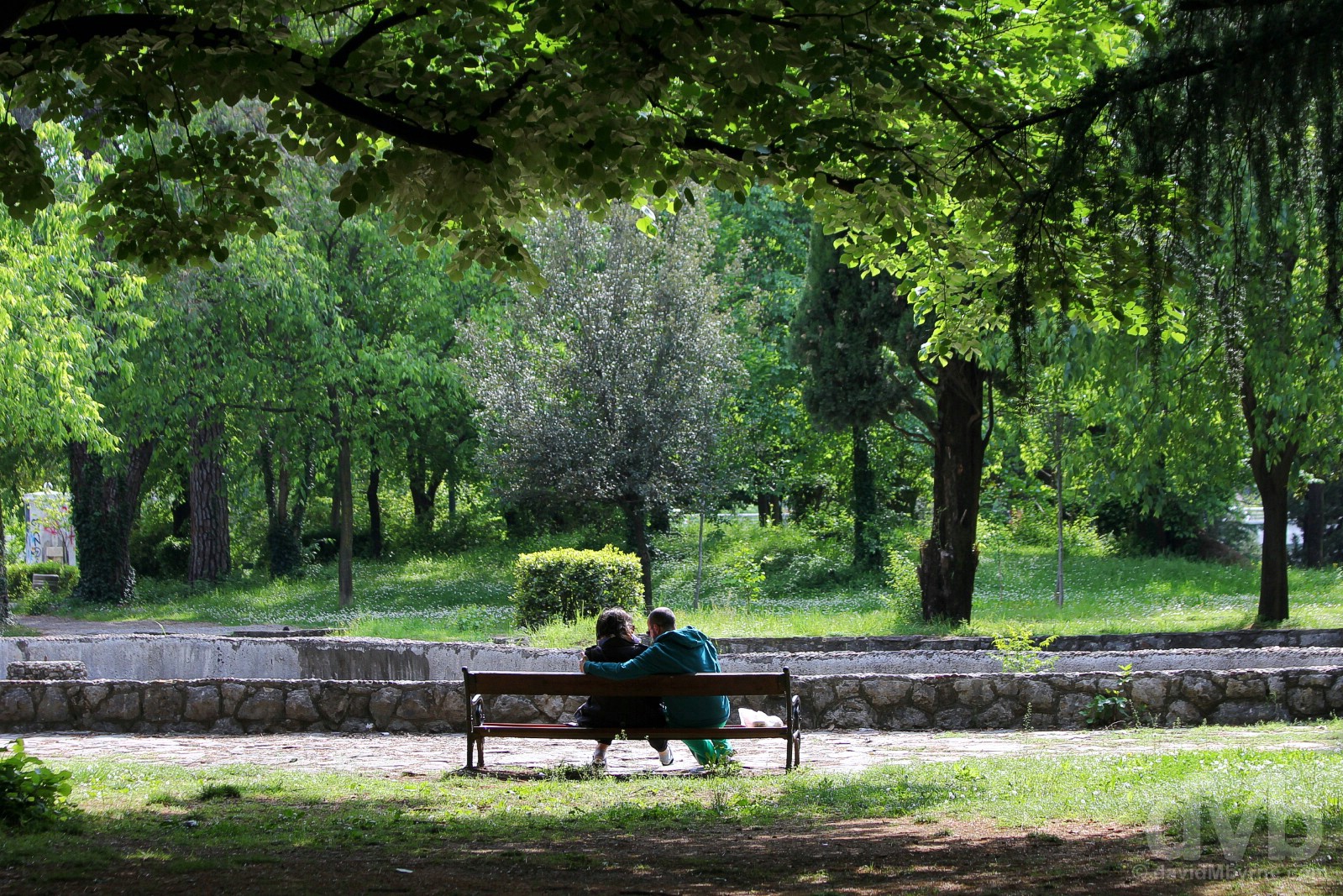 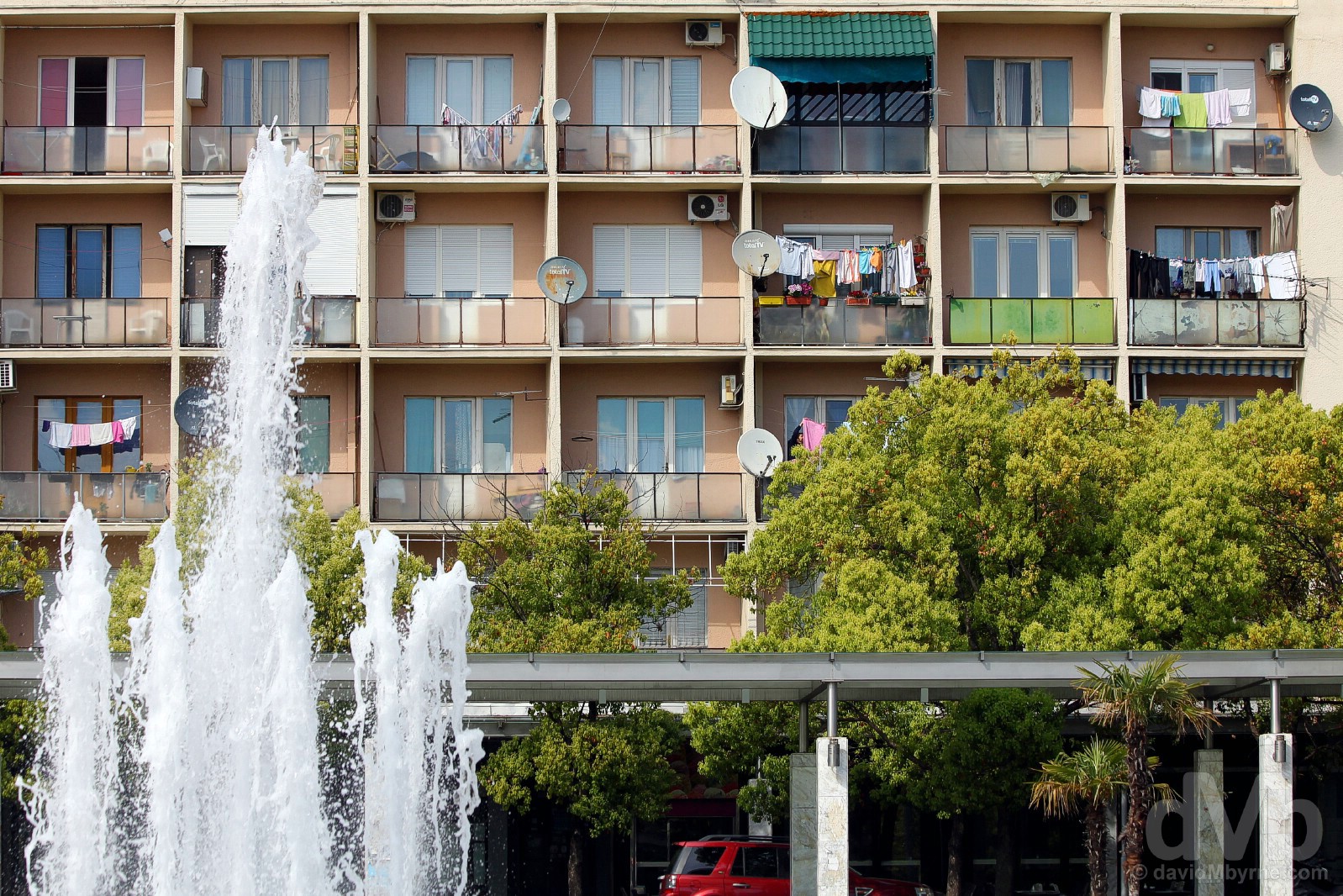 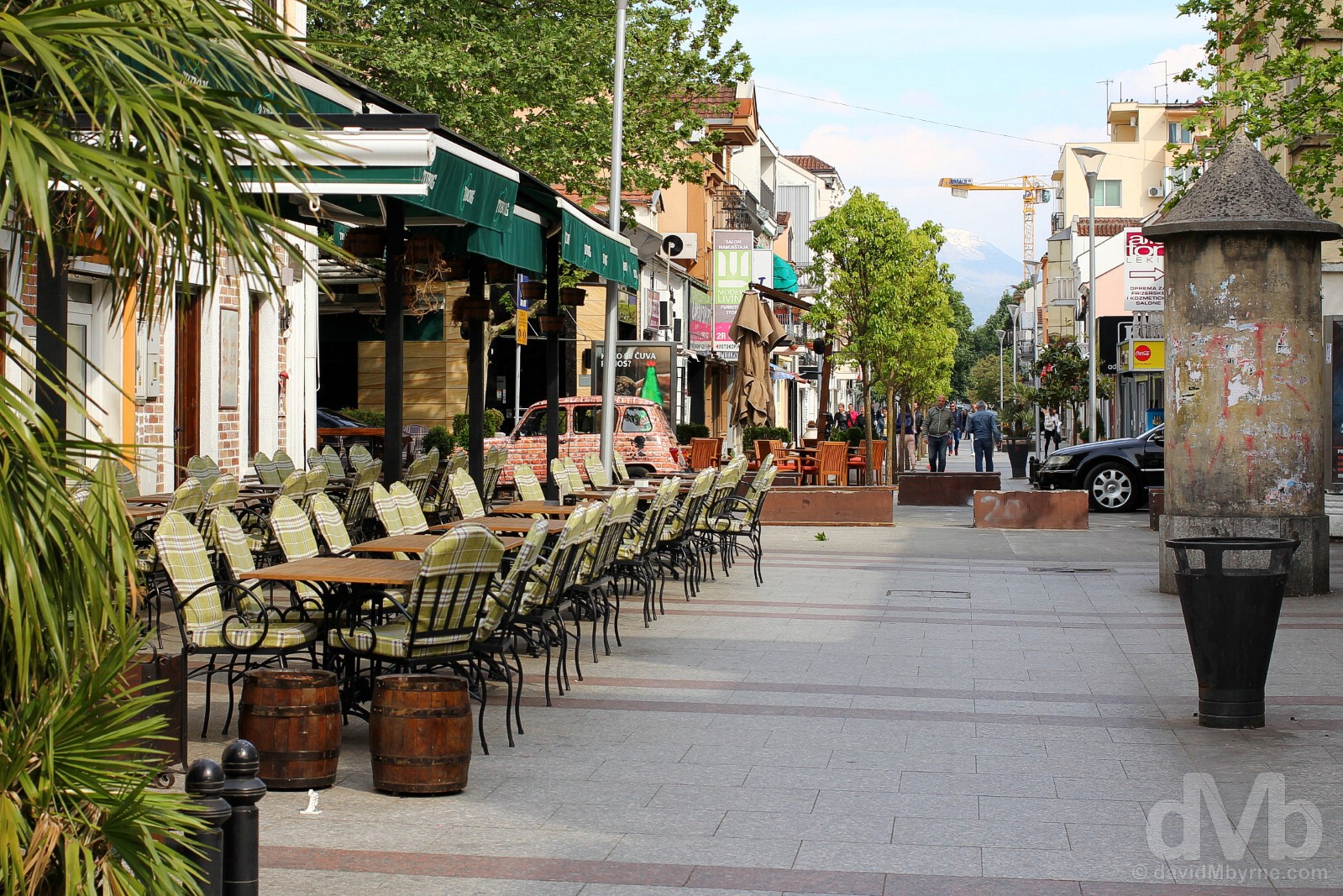 Hercegovacka, Podgorica, Montenegro. April 21, 2017. || I passed what time I could here today, sitting out watching the world go by with a late lunch & beer. I’d have rather sat inside (it was chilly), but with smoking still permitted indoors that was a no-no. Hercegovacka is Podgorica’s popular pedestrianised entertainment zone, somewhere that I’d imagine really gets going of a weekend evening. It was understandably mellow mid-afternoon of a late April Friday.