At 7.55 a.m. on Sunday 7 December 1941, the first of two waves of Japanese aircraft began their surprise & deadly attack on the US Pacific Fleet moored at Pearl Harbor on the Hawaiian Island of Oahu. It all happened so quickly & within two hours five battleships had been sunk, with another 16 damaged, and 188 aircraft destroyed. Only chance saved three U.S. aircraft carriers, usually stationed at Pearl Harbor but assigned elsewhere on the day. The attacks killed over 2,400 Americans, with another 1,178 injured. Today the slightly disturbing sight of the sunken wreck of the battleship USS Arizona in Pearl Harbor is a touching & insightful commemoration of those who died that day & of the tragic events which brought the US into the mire of World War II. 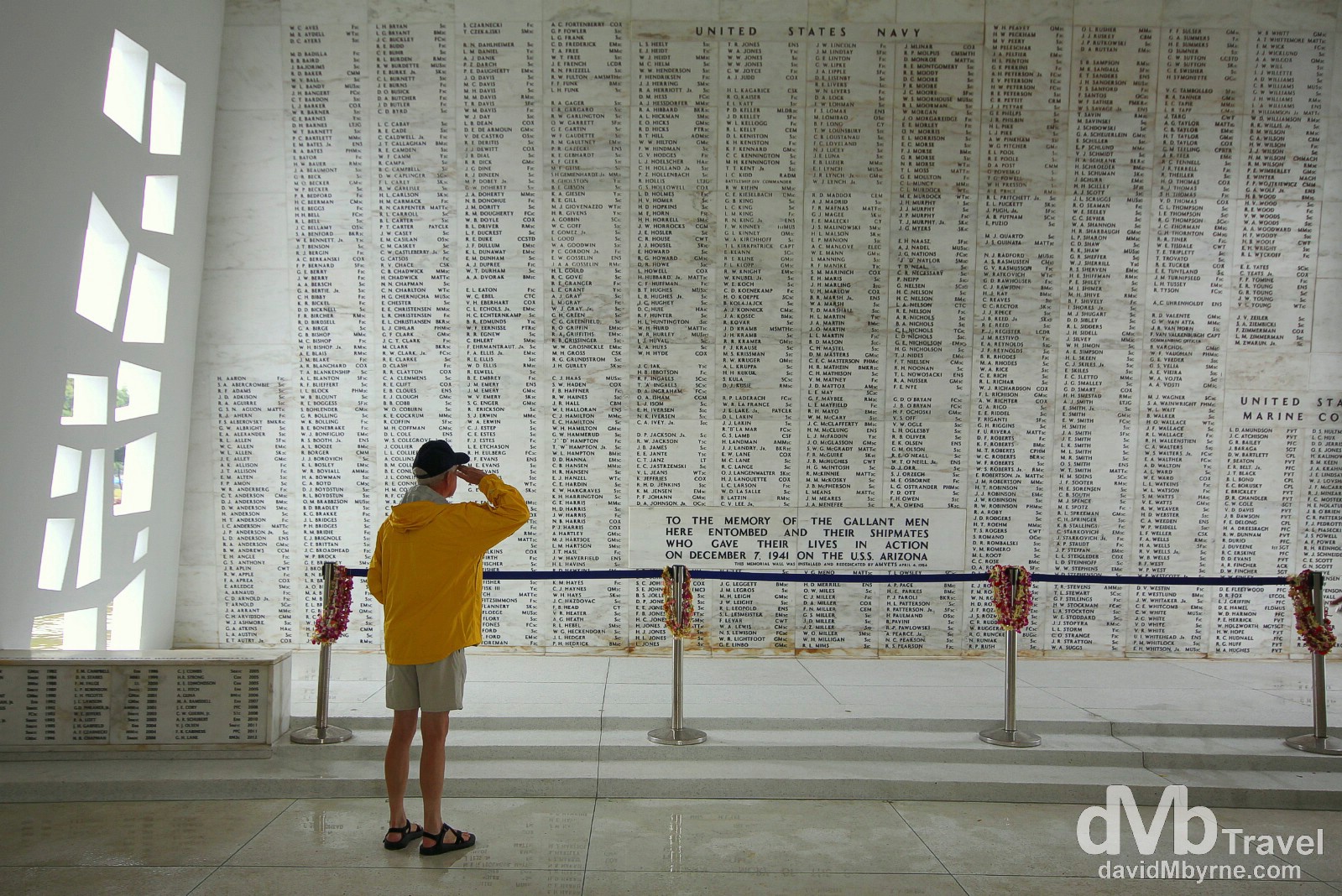 ‘A Date Which Will Live In Infamy’

Yesterday, December 7, 1941 – a date which will live in infamy – the United States of America was suddenly and deliberately attacked by naval and air forces of the Empire of Japan… No matter how long it may take us to overcome this premeditated invasion, the American people will through their righteous might win through to absolute victory… With confidence in our armed forces-with the unbounded determination of our people-we will gain the inevitable triumph-so help us God. I, therefore, ask that the Congress declare that since the dastardly and unprovoked attack by Japan on Sunday, December seventh, a state of war has existed between the United States and the Japanese Empire.

Pearl Harbor today is still a functioning navy base & the site of several memorials honoring the fallen of the war. A visit is free but it is ticketed with limited ticket numbers available daily – tickets are given out on a first-come-first-served basis and typically run out by noon on busy days when wait times of about one hour or more are not uncommon.

The visit starts with a the viewing of an interpretive film about the attack, the build-up to it, the attack itself, & the attack aftermath. 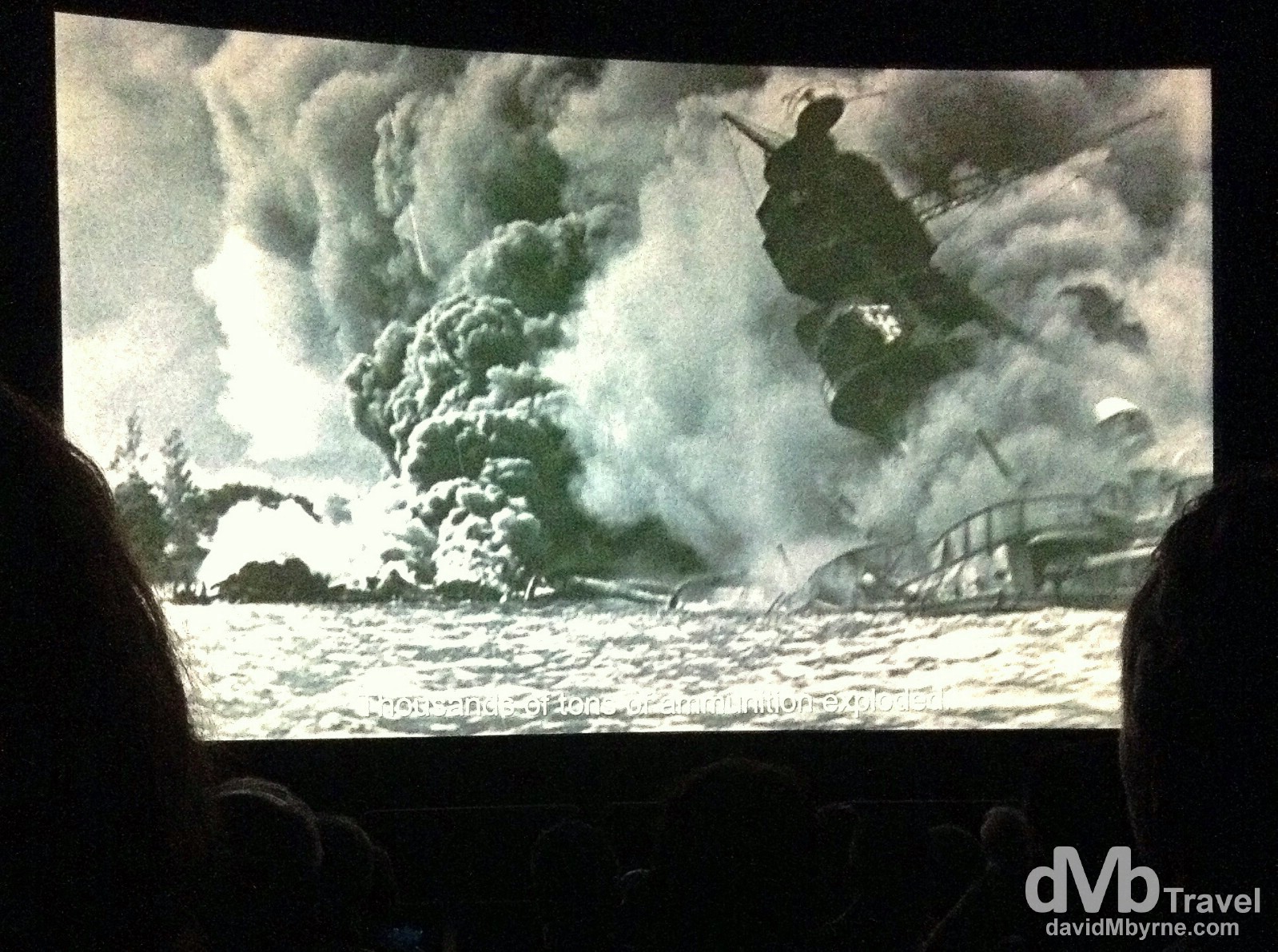 You then board a US Navy ferry which serves the route to and from the white marble USS Arizona Memorial, built over the hull of the sunken battleship. The somber memorial commemorates & serves as the final resting place for many of the 1,177 servicemen who died on the doomed ship itself. 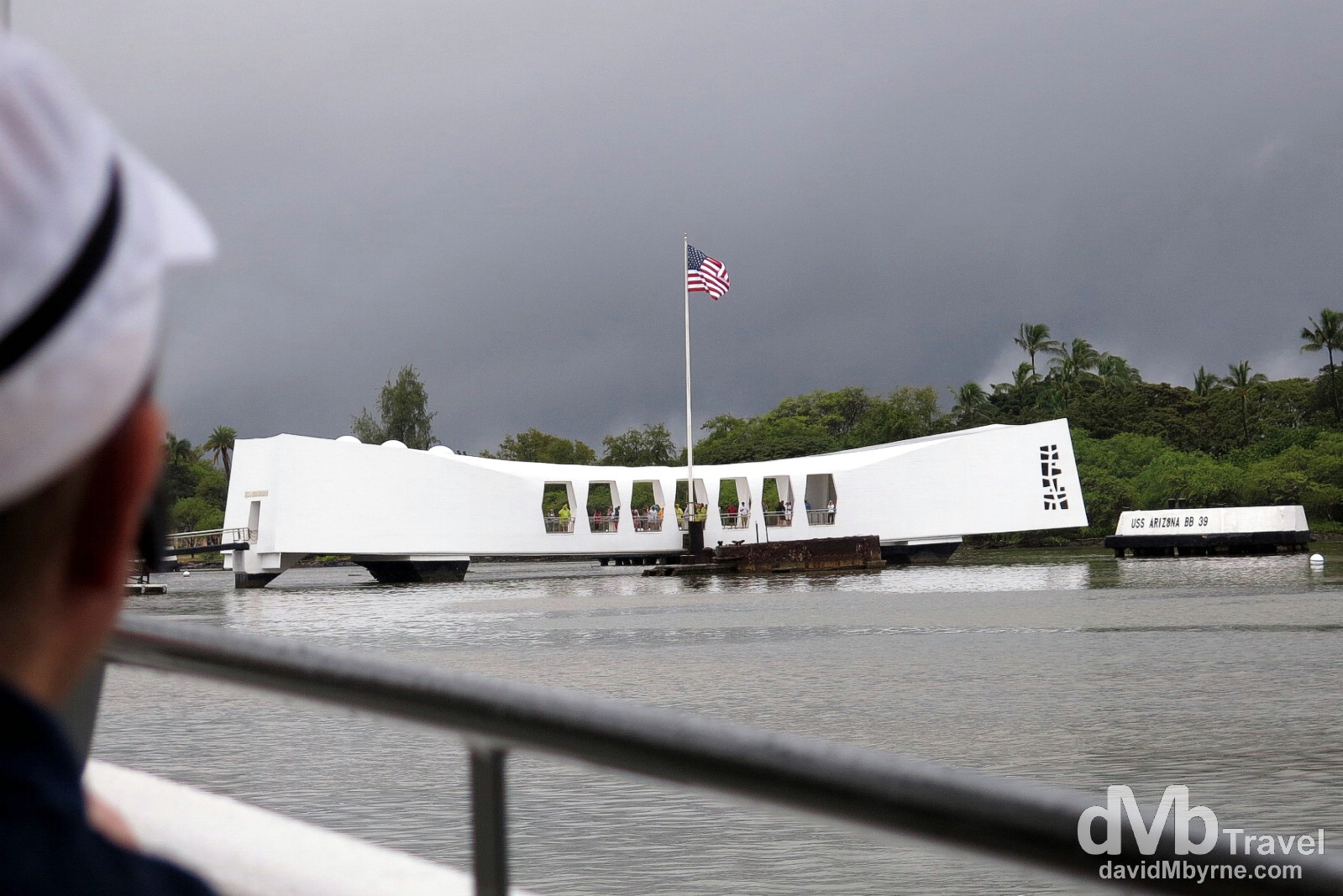 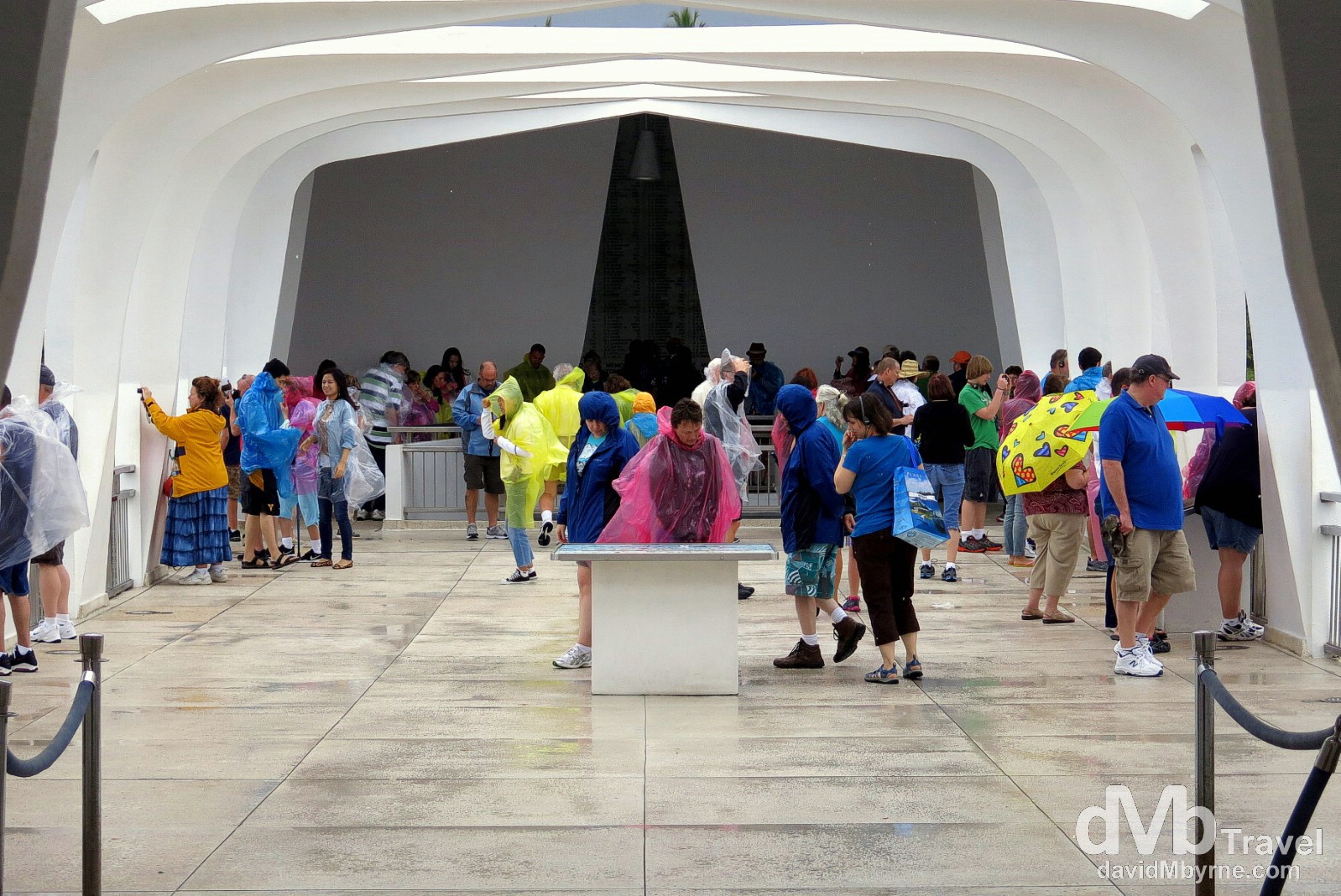 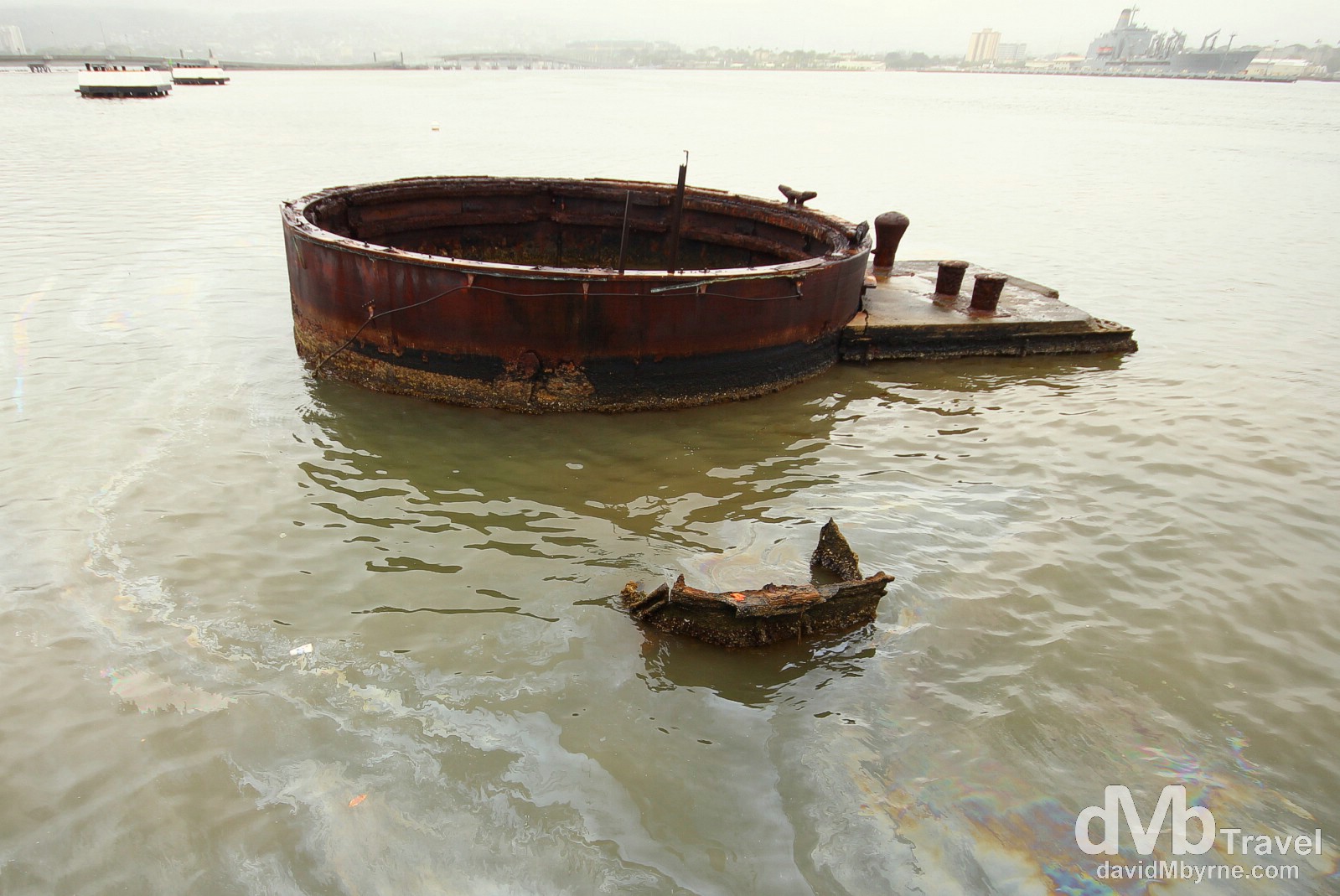 Oil still seeps from a submerged section of the USS Arizona over 71 years after the Pearl Harbor attack. Oahu, Hawaii, USA. March 10, 2013.

A Plaque On Display On The USS Arizona Memorial

To The Eternal Memory

Of Our Gallant Shipmates

In The USS Arizona

Who Gave Their Lives In Action

‘From Today On The USS Arizona

Will Again Fly Our Countries Flag

Just As Proudly As She Did On The

I Am Sure The Arizona’s Crew Will

Know And Appreciate What We Are

MAY GOD MAKE HIS FACE

TO SHINE UPON THEM

AND GRANT THEM PEACE