Capital & Most populous City In Norway, The Economic & Governmental Centre Of Probably Scandinavia's Most Expensive Country

“… a wonderfully chilled out city with some striking architecture & great museums. Yes, it’s painfully pricey – some claim it to be nothing other than the most expensive city in the world – but don’t worry too much about that. It’s a nice enough place. Quite pretty actually… “

I‘ve travelled to my fair share of so-called expensive world destinations but nowhere thus far that can hold a candle to Oslo, Norway. Here are a few everyday prices I took note of today while walking the streets of Oslo having just arrived off the train from Stockholm, Sweden (NOK=Norwegian Krone).

Everyone knows travel in the Nordic countries is an expensive proposition. I purposely didn’t mention the cost of things in Finland & only briefly mentioned how expensive Sweden was. I didn’t want to highlight it too much because I knew Norway would be a much more strenuous financial proposition – €40 for a dorm bed in the city says it all. So, welcome to Oslo, the capital & most populous city in Norway. Founded around 1000 AD & is the economic and governmental centre of the country, a hub of Norwegian trade, banking, industry and shipping. It’s a wonderfully chilled out city with some striking architecture & great museums. Yes, it’s painfully pricey – some claim it to be nothing other than the most expensive city in the world – but don’t worry too much about that. It’s a nice enough place. Quite pretty actually, at least what I’ve seen of it so far (admittedly not much beyond the city’s striking the Opera House). 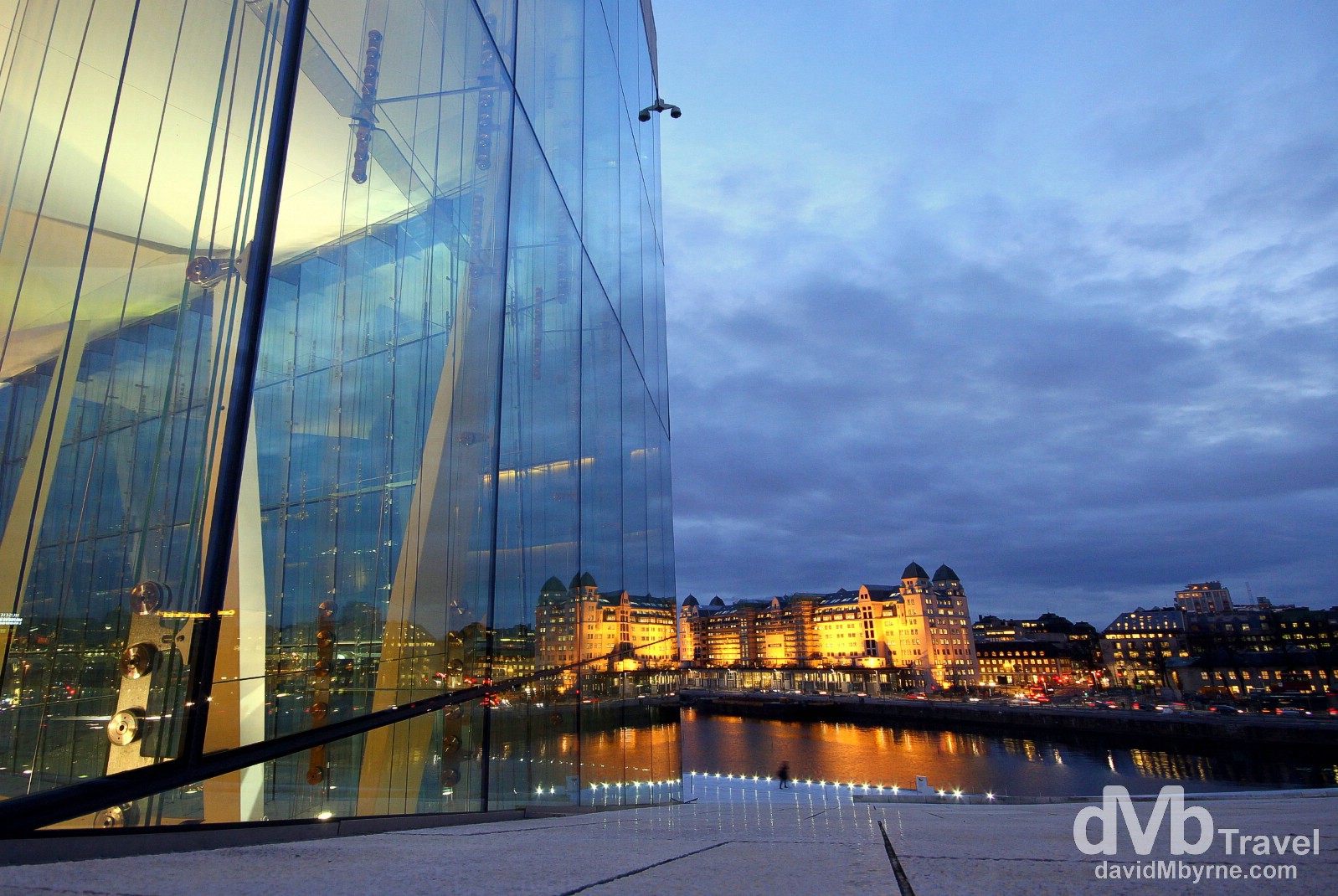 Oslo Opera House, one of the city’s newest structures, was the winner of the 2009 EU prize for contemporary architecture. It’s home to the Norwegian National Opera and Ballet and the national opera theatre in Norway. When taking this picture I was actually standing on the roof of the lower section of the building – the roof, covered in white granite and La Facciata, a white Italian marble, angles to ground level creating a large plaza inviting pedestrians to walk up and enjoy the panoramic views of Oslo. The building’s 15 metre-high glass wall has minimal framing to allow for maximum internal views of the Oslo waterfront from inside the oak-covered interior, while the roof is supported by thin angled columns also designed not to interfere with views. This picture was taken at 4:10 p.m. with the last of the day’s light disappearing rapidly (it gets dark early around here this time of year).

Between getting off the 6-hour train from Stockholm, Sweden at 2:30 p.m. and darkness enveloping the city shortly after 4:00 p.m., I did manage to see the city’s newest architectural gem, the Oslo Opera House. It was cold, a lot colder than Stockholm, but it was also dry. I’ll take cold & dry over wet & mild any day, meaning I already prefer Oslo over Stockholm. I’ll take a proper, extended look around tomorrow, including taking a look at Norwegian Edvard Munch’s The Scream in the National Gallery. But whatever I do I’ll need to have my hands firmly in my pockets.

Region – Scandinavia & The Arctic (dMb tags: Scandinavia & The Arctic). Capital – Oslo. Population – 5.2 million. Official Language – Norwegian. Currency – Norwegian Krone (NOK). GDP (nominal) per capita – US$73,000 (world’s 3rd highest). Political System – Unitary parliamentary constitutional monarchy. EU Member? – No (but thanks for the offer, twice). UN Member? – Yes (founding member admitted November 1945). G20 Member? – No. Size – 385,000 km² (Europe’s sixth-largest country is slightly smaller than neighbouring Sweden, approximately twice the size of Syria & half the size of Chile). Topography – Largely mountainous high terrain with an extensive rugged coastline on the western edge of the Scandinavian Peninsula liberally that is dotted with massive Ice Age-era fjords. Oh and not forgetting the High Arctic archipelago of Svalbard. Climate – Mild summers, bone-chillingly cold & dark winters. Brief History & Today – There is evidence of occupation along coastal Norway stretching back to the 11th millennia BC. The Vikings, those raiding & trading Norse seafarers, spread out from Scandinavia to terrorise much of northern Europe between the 8th & 10th centuries, the Viking Age. The Black Death of 1349, the epidemic form of bubonic plague that killed nearly half of the population of Western Europe, killed an estimated 60% of Norway’s population & plunged the country into a period of economic & social decline. Weakened Norway eventually entered into a union – the Kalmar Union – in 1397 with Sweden & Denmark, the three Scandinavian kingdoms first ruled by a single monarch, Eric of Pomerania. Sweden left the union in 1521 and, although it tried to follow suit, Norway it didn’t succeed in breaking from the union with Denmark until 1814 when the Danes were forced to cede Norway to Sweden as a result of defeat in the Napoleonic Wars. Following this Norway promptly tried to declare independence, a move resisted by Sweden. Independence eventually came in 1905. Neutral in principle during both World Wars, the country was nevertheless invaded by the Germans in April 1940. Oil was first discovered in the mid-1960’s marking the start of a decades-long state investment in the country’s petroleum industry, the economic benefits of which the country enjoys today and which makes Norway one of the world’s wealthiest countries. Rejecting EU membership not once but twice (in 1972 & 1974), today Norway is a progressive society with one of the world’s highest standards of living and with possibly the most developed and stable democracy and state of justice in the world. UNESCO World Heritage sites – 8. Tourism Catchphrase/Slogans – Powered by Nature. Famous For – Fjords; glaciers; having an abundance of natural resources; wilderness; winter sports; being rich & a shockingly expensive destination in which to live and visit; being politically stable & for topping many international socio wellbeing indices (Human Development Index, the Better Life Index, World Happiness Report, Index of Public Integrity, Democracy Index, Press Freedom Index etc.). Highlights – The outdoors & the wondrous wilderness – dramatic jaw-dropping landscapes abound with the fjords of coastal mainland Norway considered one of the world’s top tourist attractions and the Norwegian archipelago of Svalbard, lying high inside the Arctic Circle, the planet’s most accessible region for exploring the majestic but unforgivable High Arctic. Norway Titbits – Boasting extensive reserves in oil & gas, Norway is the world’s largest per-capita oil & natural gas producer outside of the Middle East, the petroleum industry accounting for one-quarter of the country’s vast GDP; not short of a krone or two, the country boasts the world’s largest sovereign wealth/rainy day fund, an estimated USD $1 trillion; stretching from 57° to 81° N (north of the equator), Norway’s jagged & fjord-infused mainland, together with its thousands of islands, boasts a coastline of over 25,000 kilometres; the high latitude and large latitudinal range of the country also means it has a vast variation in topography, climate and large seasonal variations in daylight – for 2+ months in the summer in the High Arctic the sun never completely descends beneath the horizon, hence Norway’s tag as the ‘Land of the Midnight Sun’.

Norway is a once-in-a-lifetime destination and the essence of its appeal is remarkably simple: this is one of the most beautiful countries on earth.

After a brief introduction yesterday, I had a more in-depth look around Oslo today. The city did nothing to lessen its appeal & I like it more now than I did 24 hours ago. There is lots to do and see here. I did as much as I could in one day, which turned out to be quite a lot.

I started the day by paying a visit to the 1697 Oslo Cathedral. 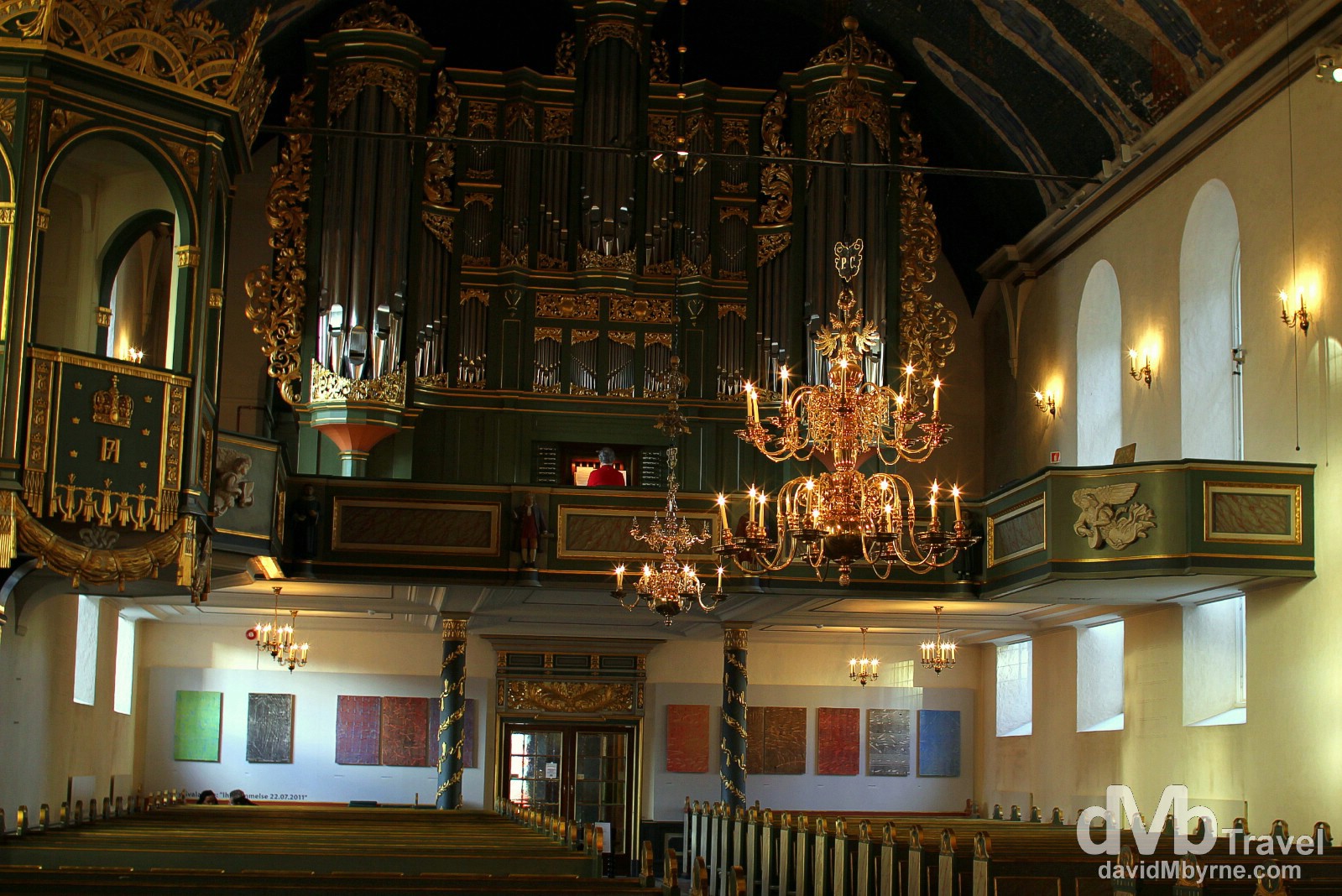 I sat in the gallery and observed a very quiet session of Stortinget, the Norwegian parliament.

A chamber of Stortinget (Parliament). It was quiet. Very quiet. There were very few elected representatives in attendance. It seems like the country runs itself. Oslo, Norway. November 29, 2012.

I ogled at the lavishly decorated interior of the Oslo Radhus (Town Hall). 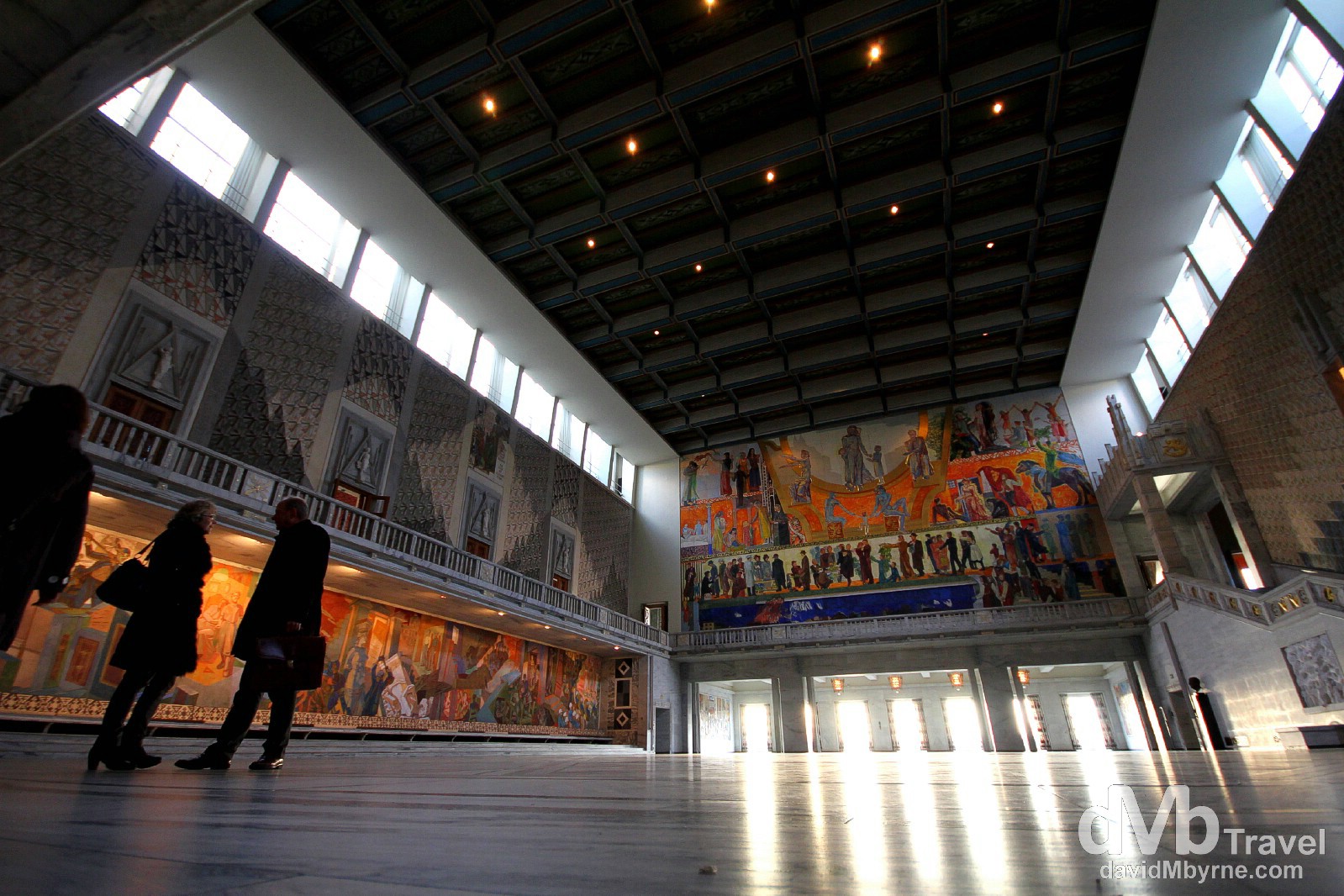 I sat by the Oslo waterfront playing with late afternoon shadows. 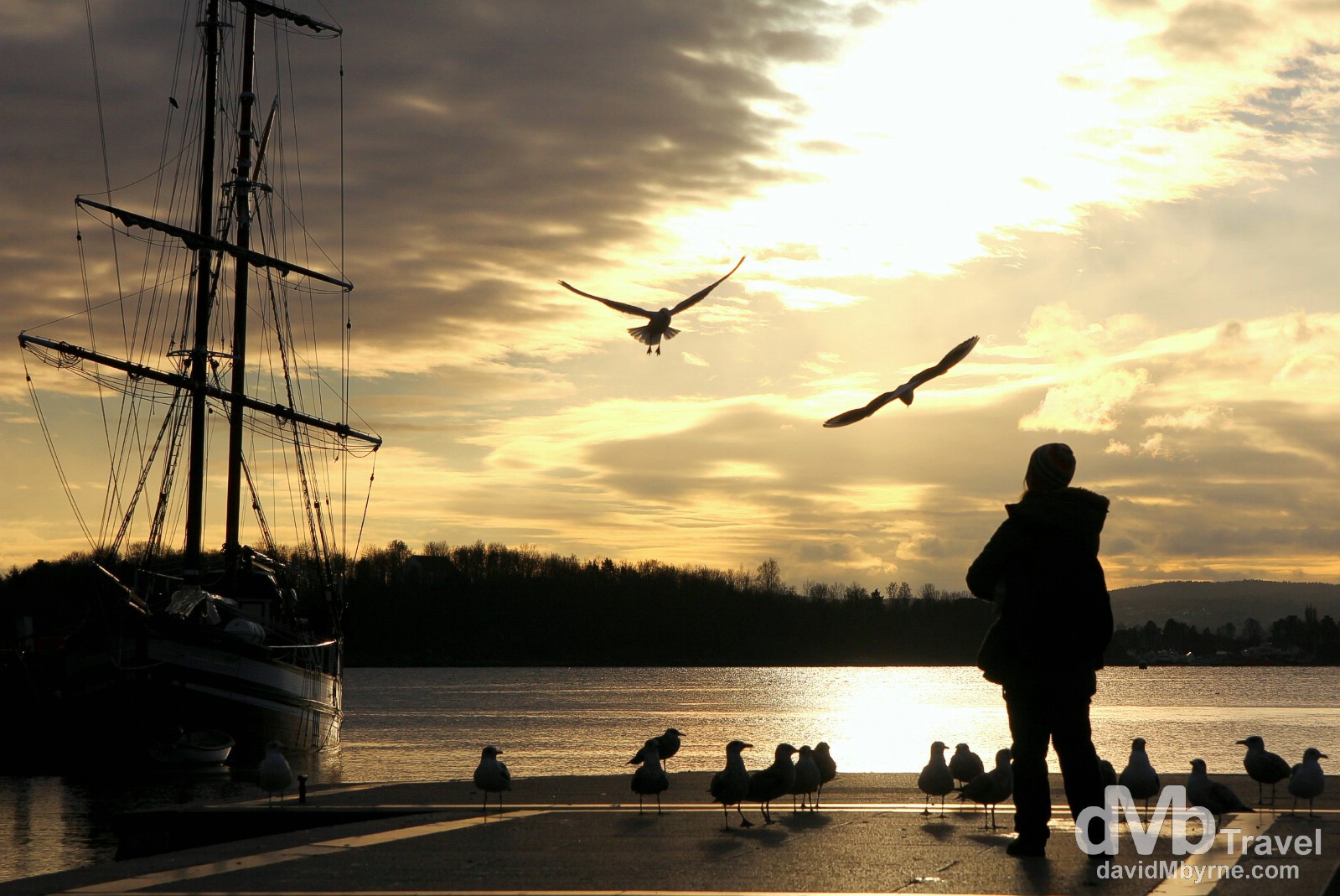 Sunset silhouettes & shadows by the waterfront in Oslo, Norway. November 29, 2012.

I saw The Scream in The National Gallery. 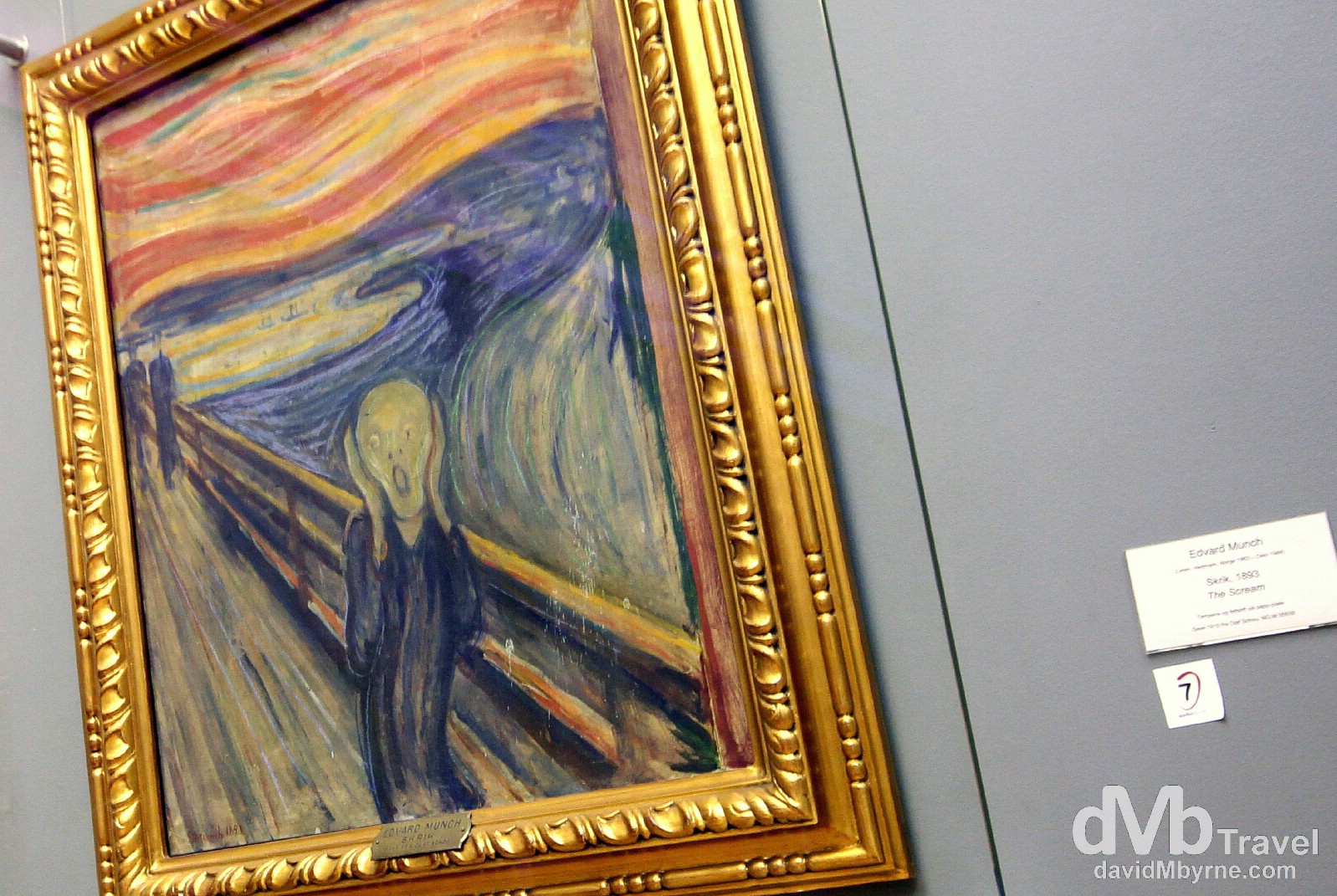 The Scream by Edward Munch hanging in the National Gallery, Oslo, Norway. November 29, 2012.

And I took in the festive sights on the pedestrianised streets of central Oslo. 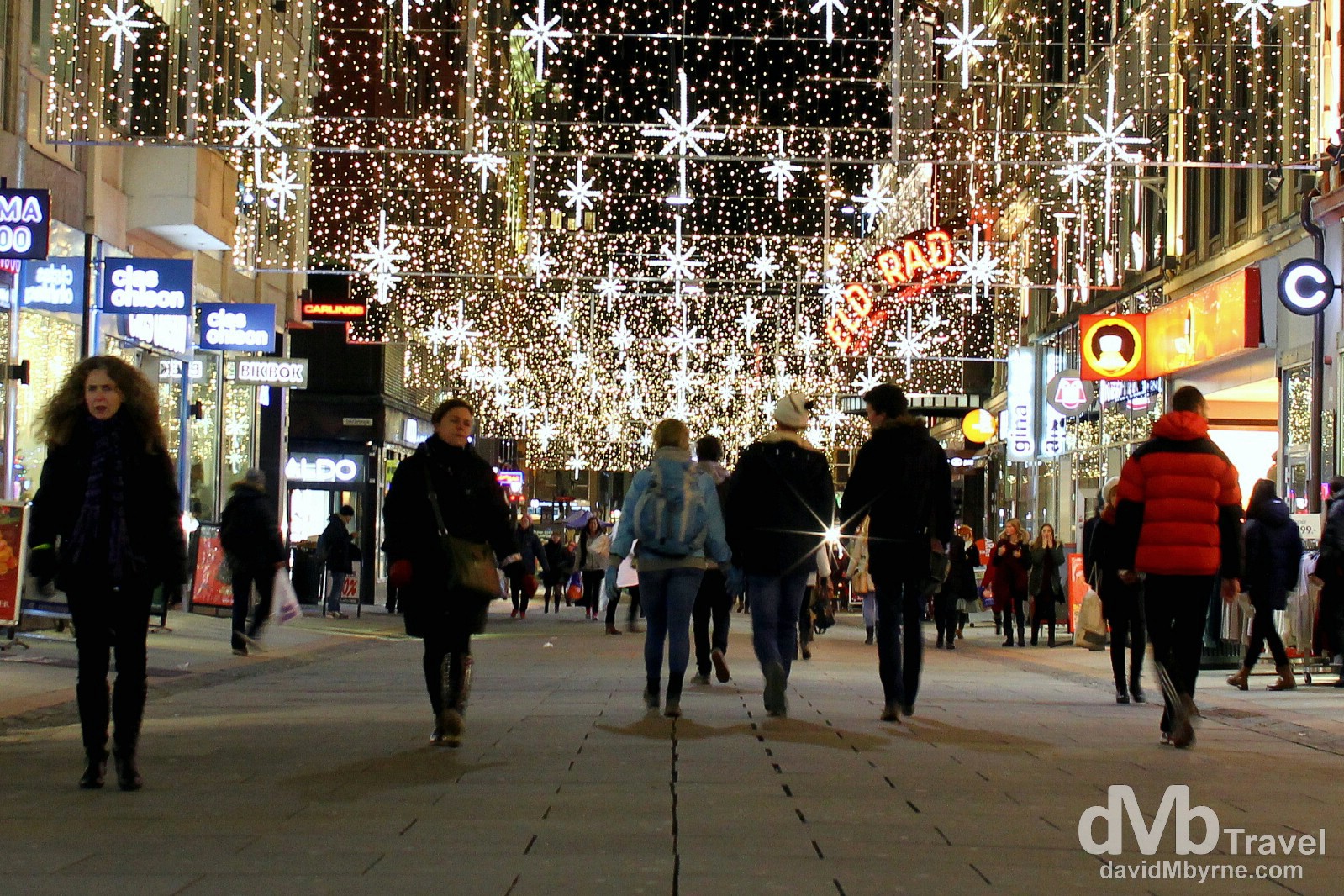 A festive look on Torggata, a pedestrianised street in central Oslo, Norway. November 29, 2012.

I wish I had more time (& money) to hang around here which, I guess, is the best motivation to come back. But I don’t. Tomorrow I fly to Iceland. Needless to say that should be a highlight. Beyond that I don’t know what to say. Iceland. Tomorrow.