Suffice to say, Oahu, easily the most developed, populated and touristy of the eight Hawaiian Islands, doesn’t offer the escapism of the other islands. It’s also true to say that to see what the island does have to offer – surprisingly beautiful heartland mountain scenery, miles of pineapples plantation fields, funky beach towns & idyllic beach parks (in summer) & pounding, world renowned surf (in winter) – one needs to get away from the built up Honolulu & Waikiki areas. This is easily done by renting a car (readily & cheaply available from any of Waikiki’s numerous tourist agencies) and even with a day at your disposal the island can be sufficiently toured, meaning you’ll be back in Waikiki in time for the next party. That was my plan for today & shortly after picking up my rental car on what was a horribly wet & overcast Hawaiian day I was en route to surfing central, Oahu’s North Shore. 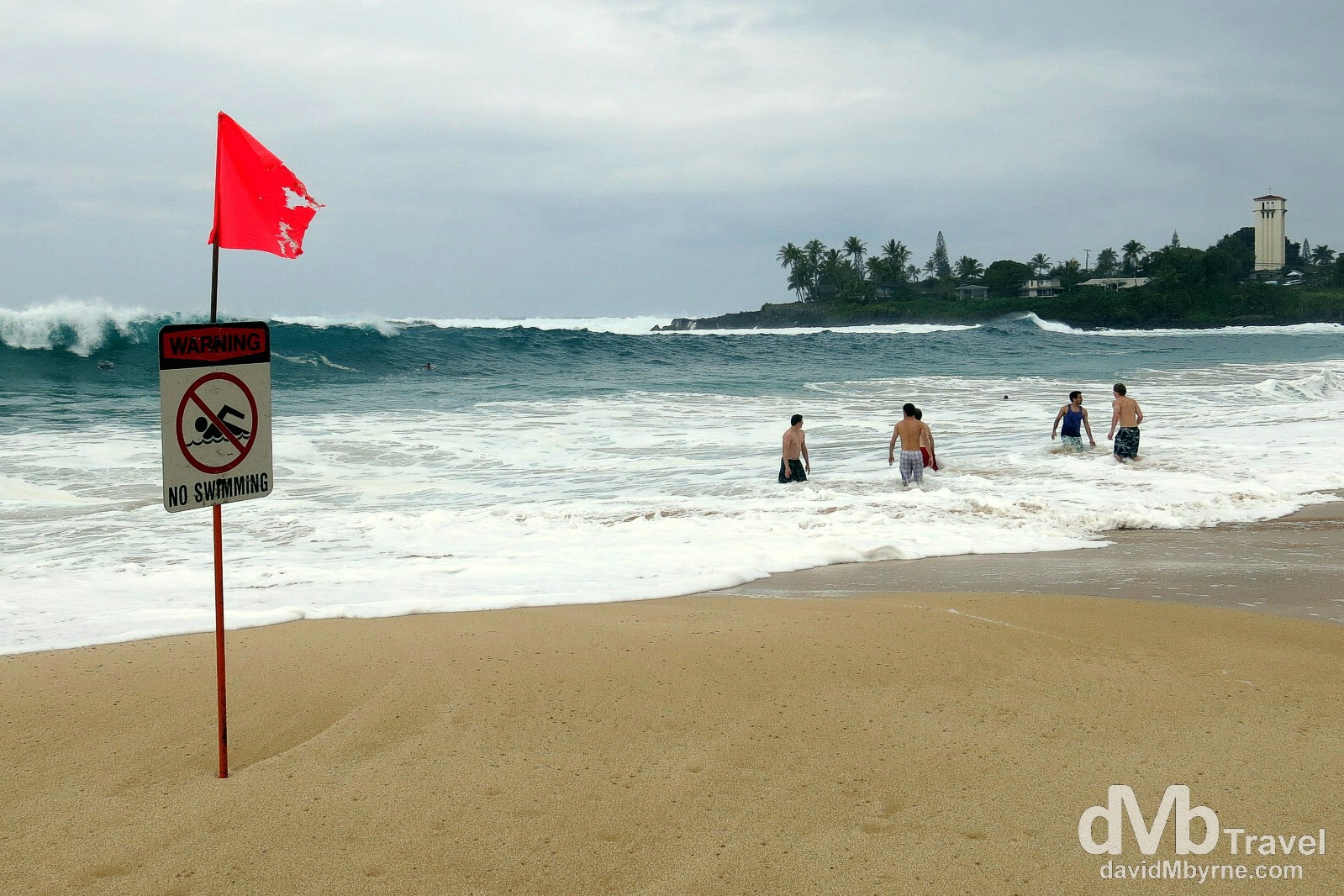 Oahu’s North Shore is surfing central, the most famous surfing area on the Hawaiian Islands, where the sport was invented. In the summer these waters are as calm & inviting as you’d expect a beach in Hawaii to be. I should know – I was here in July 2003 and spent an afternoon swimming in these very waters. Not so today. Winter waves make these waters pro surfer only territory from the months November through March – you don’t enter North Shore waters at this time of year unless you know what you’re doing. The 9-12 metre (30-40 ft) winter waves here on Waimea Bay Beach are some of the largest and most dangerous ride-able surf in the world and standing on the sands of Waimea Bay and watching people playing (& losing) with the waves was fun. Waimea Bay, North Shore ( 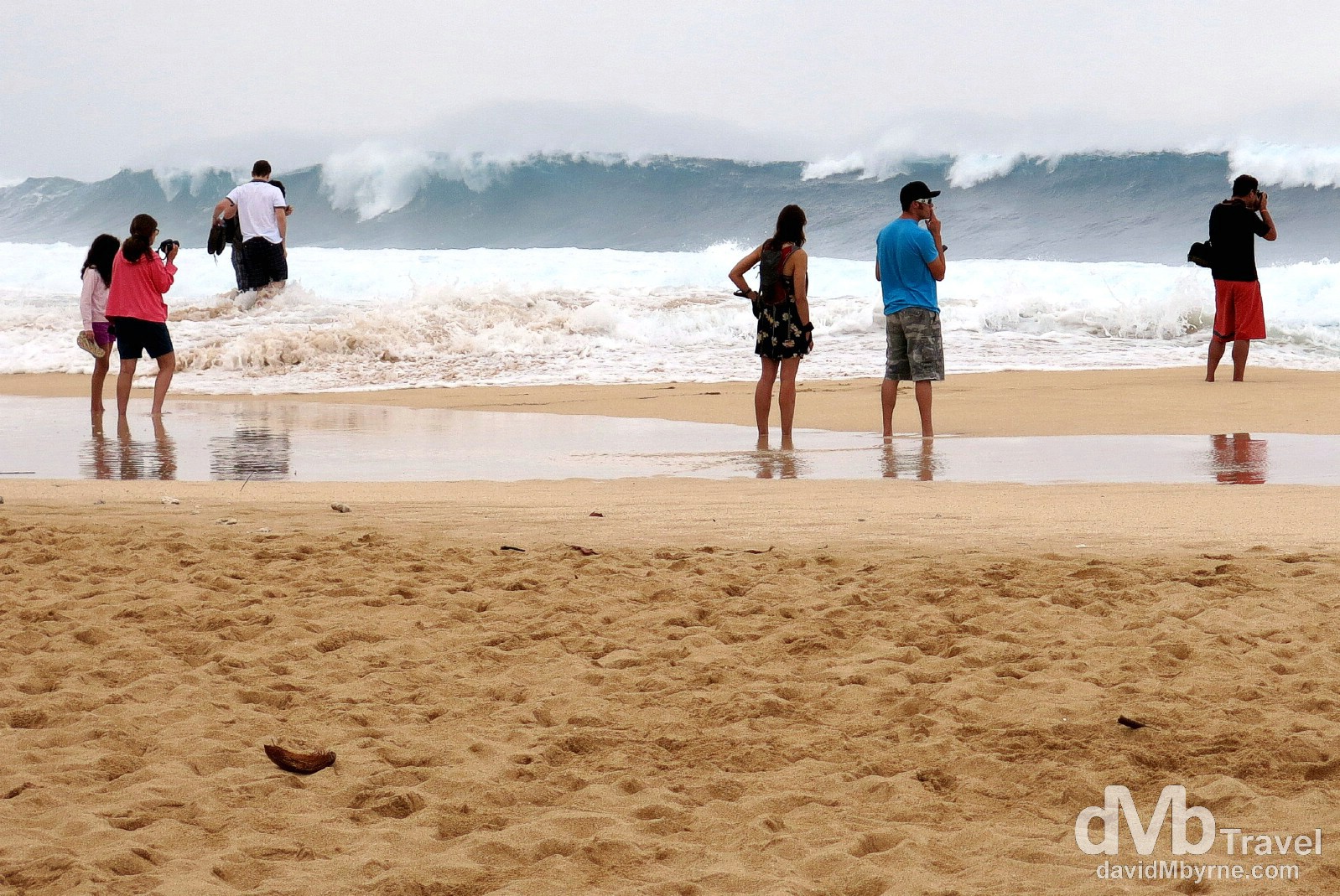 Ehukai Beach Park, also somewhat morbidly known as Reddish Tinged Water, is home of the Banzai Pipeline, one of the most famous surf breaks in the world – it’s also considered the world’s deadliest wave having claimed the lives of many surfers & photographers brave enough to tackle its swells. Part of the triple crown surf tournament, this beach is frequented in the winter months by many of the world’s best surfers. Ehukai Beach Park ( 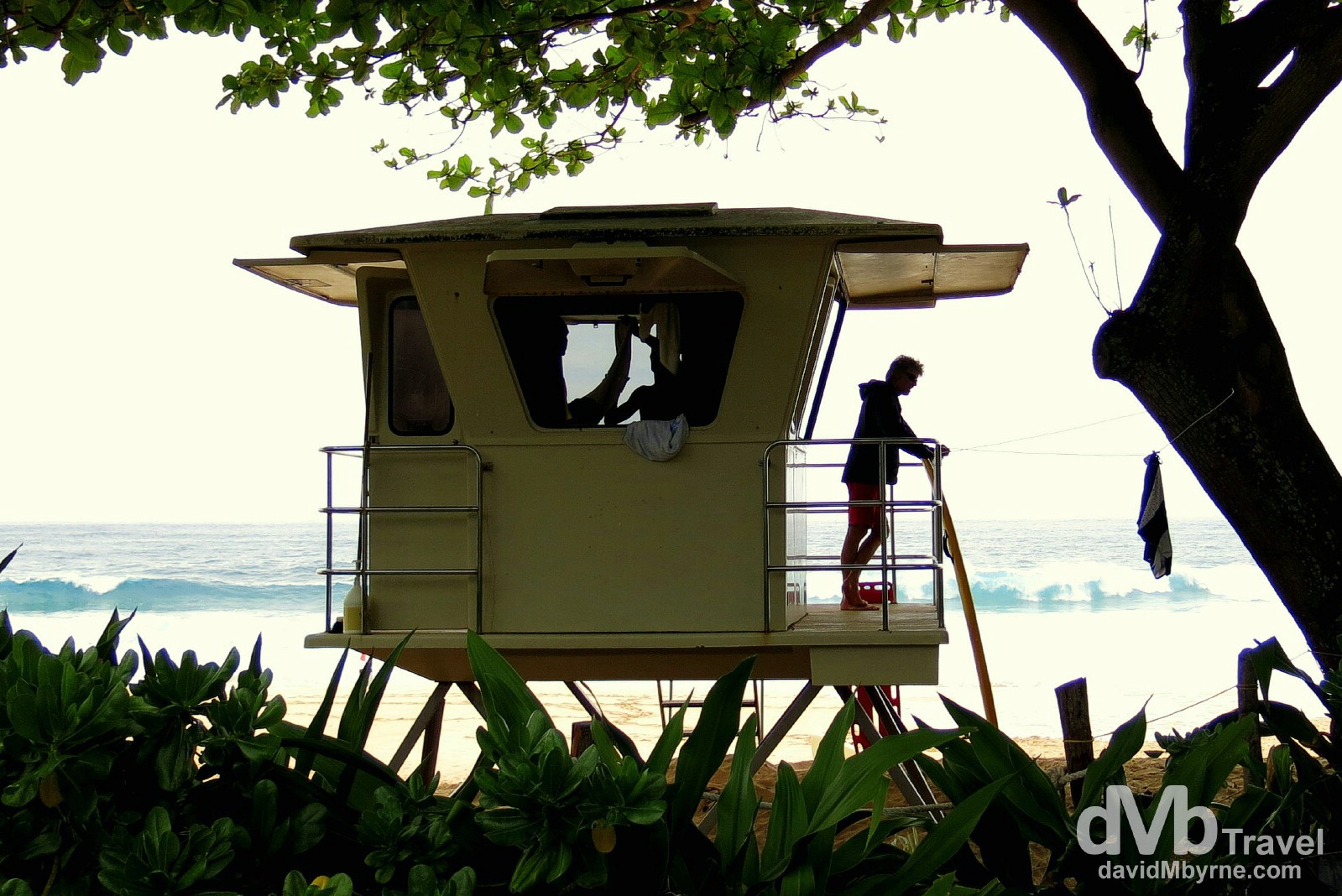 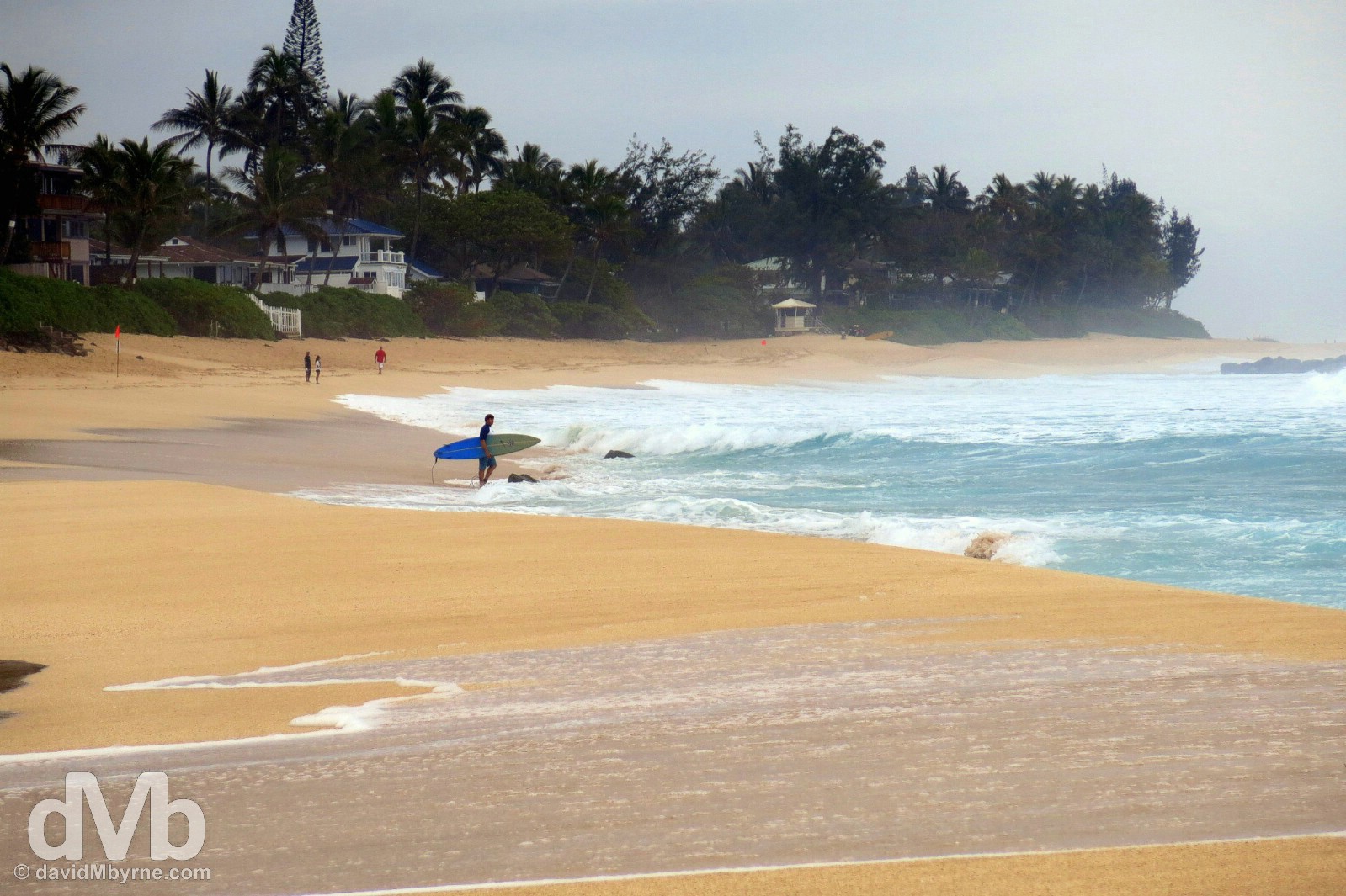 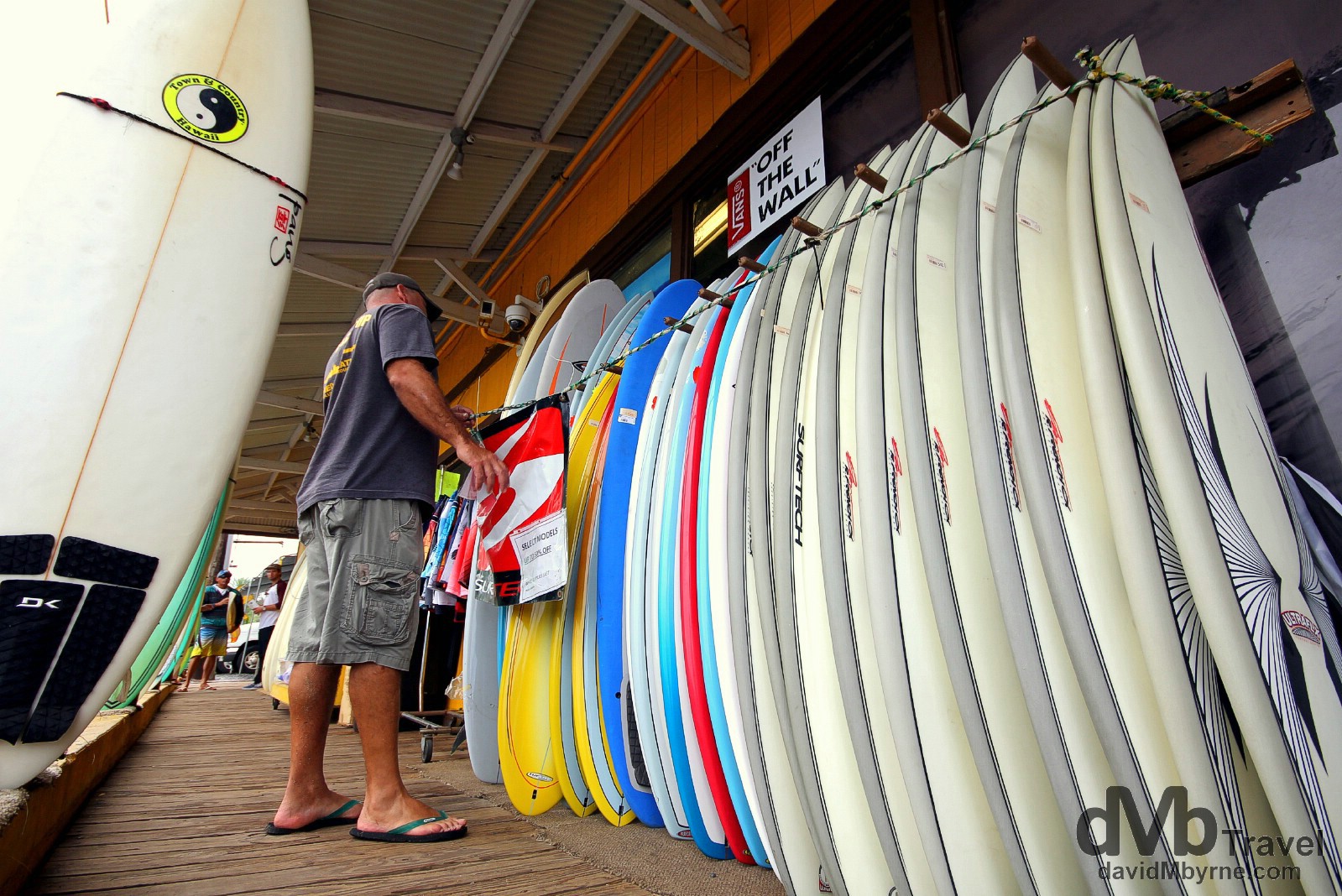 Looking at surf boards outside Surf N Sea, one of the most famous surfing shops in the world. Haleiwa, North Shore, Oahu, Hawaii, USA. March 10, 2013.