Arguably The Most Glamorous, Most Star-Studded & Richest Place On Earth

The Principality of Monaco is a tiny sovereign city-state, a limpet of land on France’s underbelly best known as a tax haven & seaside playground paradise for the affluent. The absurdly affluent. Completely surrounded by France, only some 8 kilometres (5 miles) from the western border with Italy & hemmed in by the Mediterranean Sea, the place is about the same size as London’s Hide Park making it the second smallest country in the world (after Vatican City) & the smallest country in the world with a coastline; it measures a mere 4 kilometres (2.5 miles). It may be minuscule but thanks to the Grand Prix, Grace Kelly & the superstars who flock here, it has a big reputation. The most glamorous, most star-studded & richest place on earth, it’s no surprise that this is a land where money is king. In fact, it’s a religion. So what is there to do here if, & like most of us, you’re not stupidly rich? Well you could, & just as I did, admire the gaudy glamour and stare at people who are stupidly wealthy & at things you couldn’t possibly afford, the super-yachts in shimmering Port de Monaco & the lovely Beaux-Arts villas clinging precipitously to the hillsides the obvious examples of Monaco’s in-your-face materialism. Spending a few hours snooping around the principality is quite the enjoyable endeavor, but just be prepared to feel wholly inadequate when doing so.

A sunny place for shady people.

Nautical But Nice || Hang Out By Port de Monaco 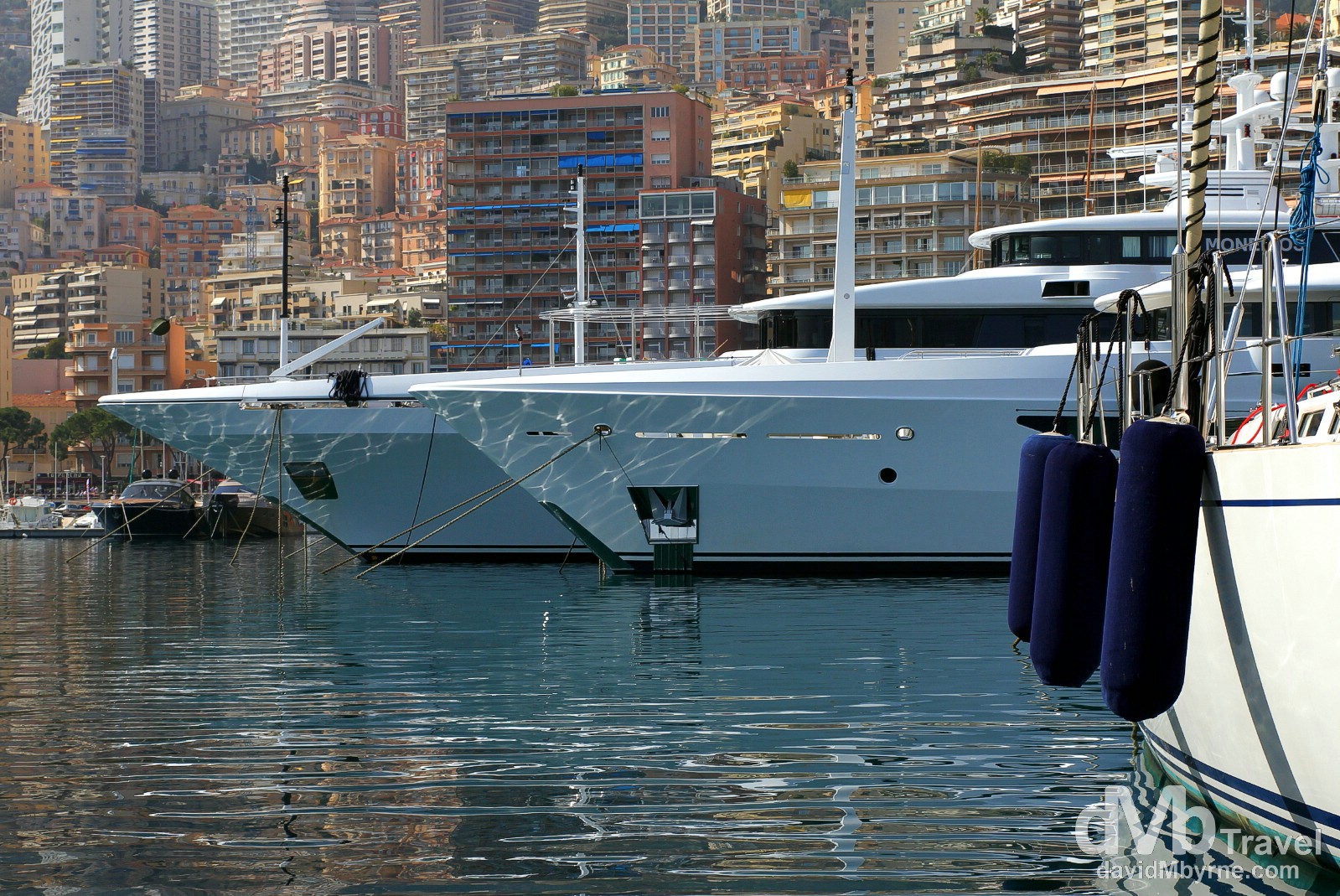 Impossibly glamorous Monaco reaches its zenith down by Port de Monaco, its small port which is home to some of the most hideously expensive yachts & pleasure craft in the world. And here in Monaco yacht size matters – bigger is obviously better. You can rent a super-yacht, some so big they resemble floating buildings rather than pleasure cruisers, during the Monaco GP for the guts of €100,000 a night. No doubt pocket change for those who can afford it. Port de Monaco, Monaco (

Tell you the truth, I hate Monaco. It’s like riding a bicycle around your living room.

Slumming It, Monaco Style
With a population of some 36,000 packed into such a small area, Monaco is the most densely populated country in the world. Yes there are the lovely Beaux-Arts villas clinging precipitously to the hillsides, but you won’t find many palatial mansions here & certainly no lavish, sprawling country homes. There’s simply no room. Most live in relatively small apartment high-rises riding the hills overlooking the Mediterranean (as seen in the above picture). No, people here aren’t exactly slumming it in a sea view shoe box but still, spare a thought for them. It’s the address you see & the tax haven it provides. It means the rich get richer & it also means that there are no shortage of them – the uber-rich – looking to live here; at present Monaco boasts the most millionaires (approximately 2,000 of them, with over 50 billionaires) per square metre than anywhere else on earth. Needless to say Monaco property prices weren’t exactly rocked by the recent credit crunch – average prices of almost €50,000 per metre square means this is the most expensive country in the world in which to live. Not that that should surprise many. 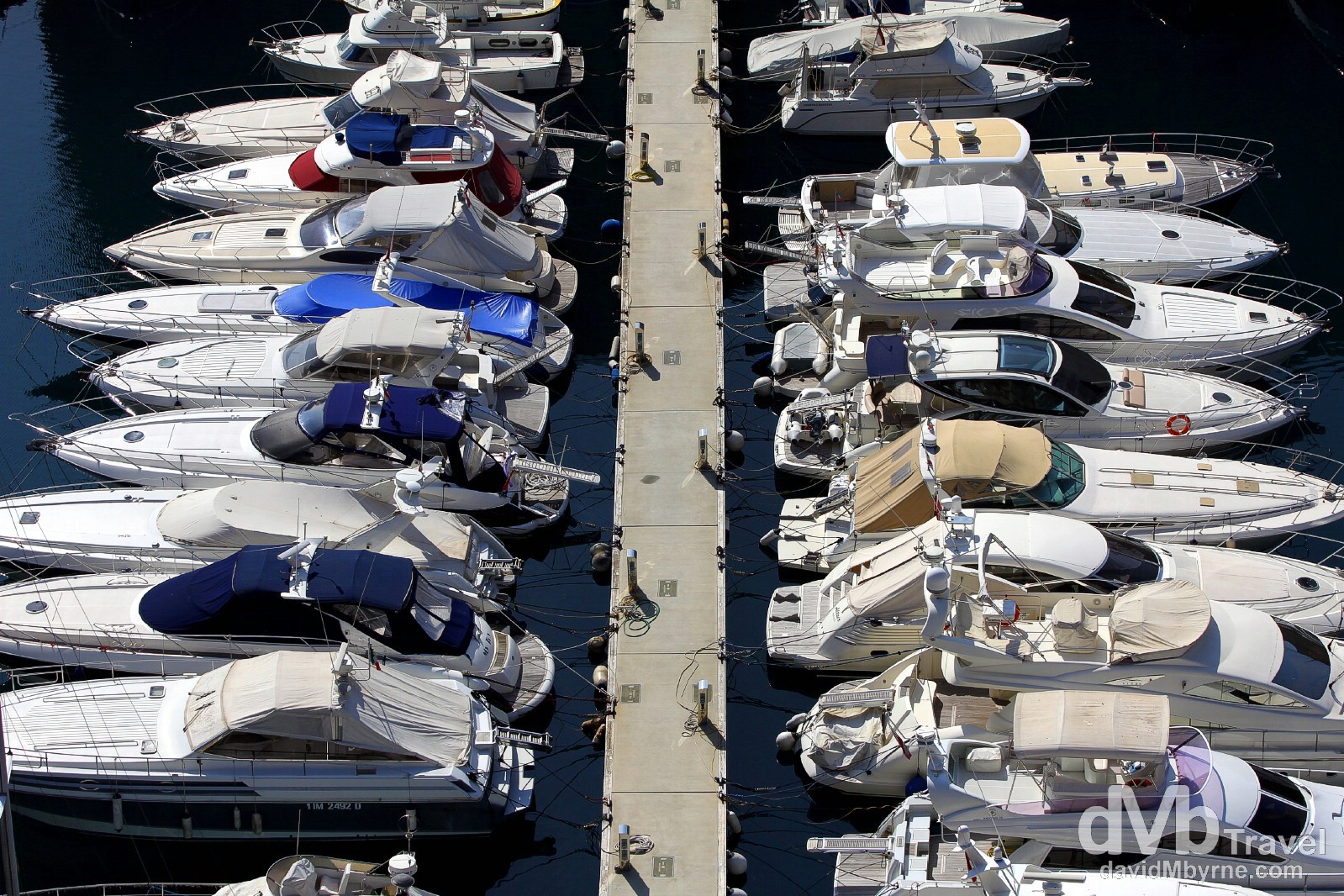 Watch the Changing of The Guard at Palais de Prince

A guard prancing around in front of the Palais de Prince, Monaco Ville, Monaco. March 14, 2014.

Perched on a 60 metre-high outcrop of rock overlooking Port de Monaco is Palais de Prince, the home of the sovereign state’s greatest asset, its royal family, the Grimaldis. They have ruled Monaco, with only brief interruptions, since seizing a fortress here in 1297, 717 years ago. The vast majority of those years were spent in relative anonymity. All that changed in 1956 when the then ruler Prince Rainer III married Hollywood movie star Grace Kelly in a fairy-tale wedding that was watched by some 30 million viewers around the world. The wedding, intentionally or not, was the PR coup of the century and it catapulted Monaco from obscurity into a brand synonymous with glamour & elegance – a mild climate & splendid scenery didn’t hurt its cause either. Princess Grace died in a car crash in 1982 but her legacy lives on through her children Princesses Caroline & Stephanie & the current ruler, Prince Albert, who has ruled since 2005. Despite Monaco’s independence and separate foreign policy, its defense is the responsibility of France. However, Monaco does maintain two small military units. The guards seen outside the palace mainly serve a tourism purpose with the highlight of their day being the changing of the guard ceremony, held daily at 5 minutes to midday. 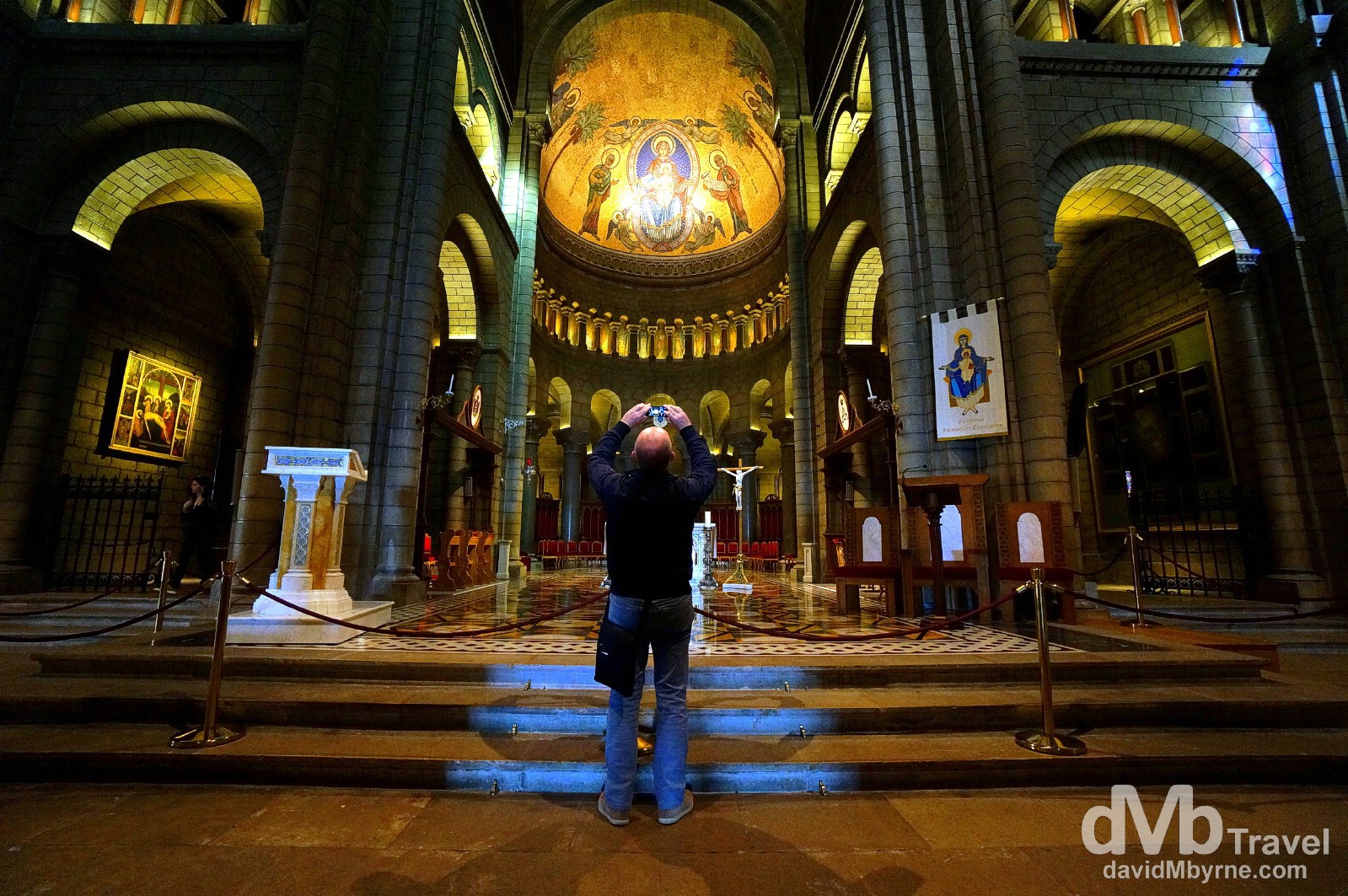 Inside the opulent 1875 Romanesque-Byzantine Cathedrale de Monaco. The graves of the aforementioned Prince Rainier & Princess Grace are to be found on the western, left side of the altar seen here. Monaco Ville, Monaco. March 14, 2014. 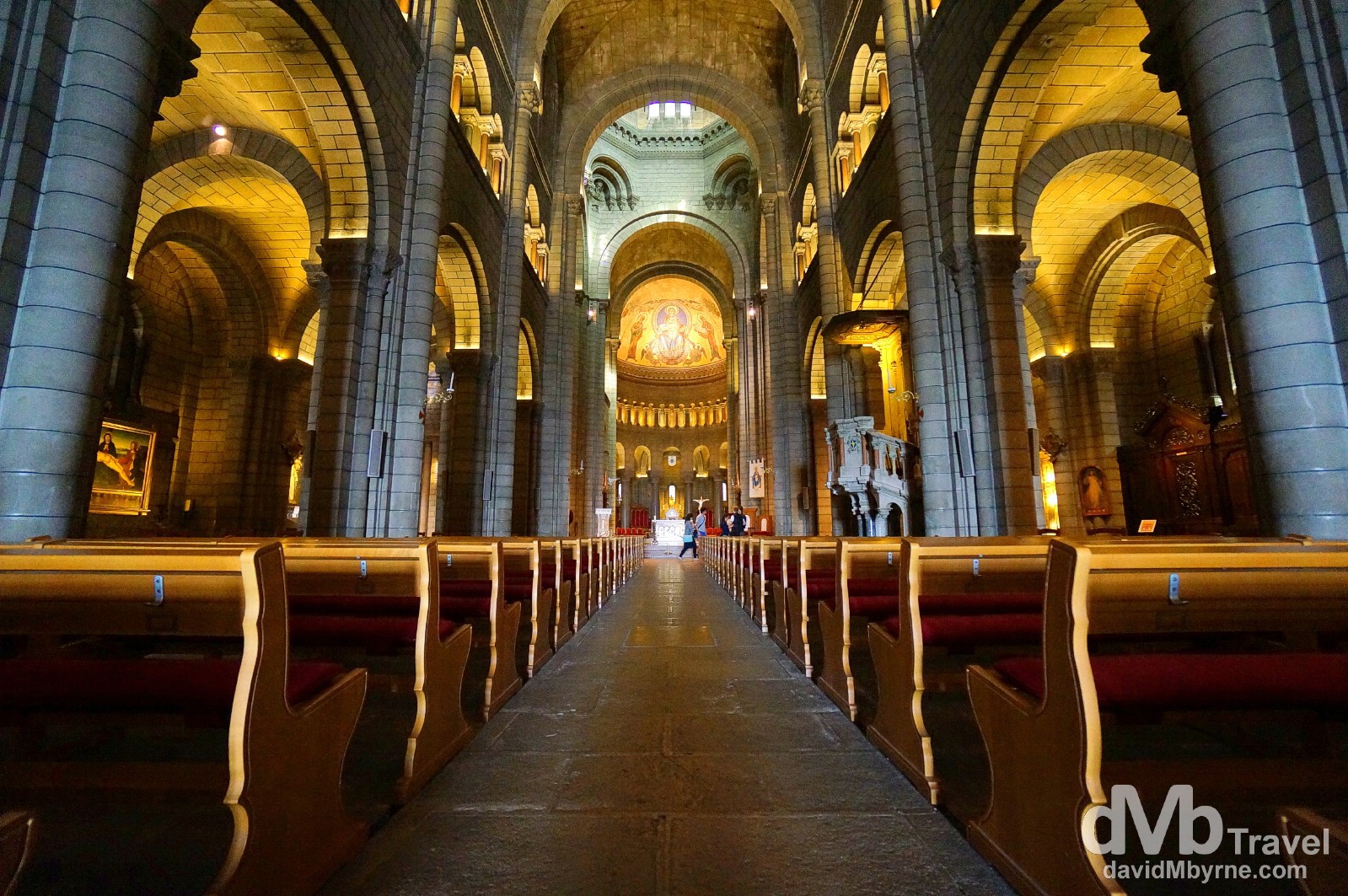 • Everyone is rich here. Absurdly so. When having a look around you’ll feel like a pauper. It’s unavoidable.
• It’s remarkably clean. Seemingly the streets are scrubbed daily.
• The unofficial language may be money but the official language is French. However, Monégasque (a dialect of the modern Ligurian language), Italian, and English are widely spoken and understood.
• It uses the Euro, mainly because of its relationship with France. If visiting, bring plenty with you.
• It’s the smallest member of the UN.
• Monaco is not an EU member (& it seems to be doing OK without it by looks of things).
• Security is insane. CCTV cameras are everywhere and every car entering the Principality is scanned.
• Multi-million dollar yachts, million dollar watches, Ferraris & Lamborghinis are all ten a penn… em, ten a million.
• You’re requested to dress appropriately, in no less than 4 different languages. 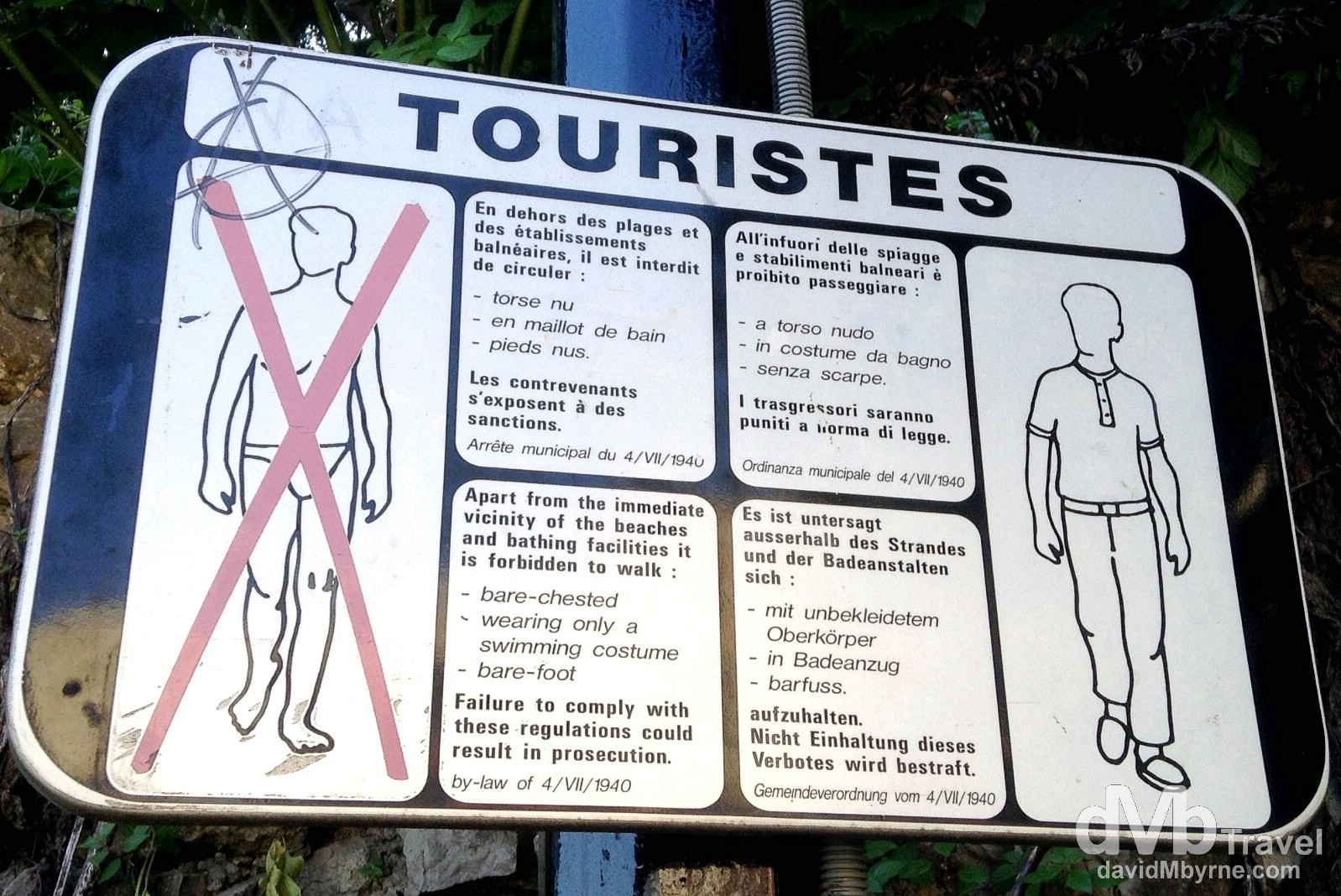 Tourists: Dress Appropriately. It’s somewhat ironic to see graffiti on this sign, the sort of thing you don’t expect to see here in utopia. Monaco. March 14, 2014.

Feel Wholly Inadequate By Hanging Out in Monte-Carlo

Slap-bang in the centre of Monaco is the most famous & most populous of its 10 administrative regions, or wards, Monte-Carlo (Mount Charles), the main residential & resort area of the principality. When people think Monaco they invariable think Monte-Carlo; I know I did. Monte-Carlo is nothing more than a traffic island, Place du Casino, around which you’ll find the iconic Café de Paris, the plush Hotel de Paris, Salle Garnier, home of the Opera de Monte-Carlo, & the legendary Monto-Carlo Casino. It’s the place to see & be seen. 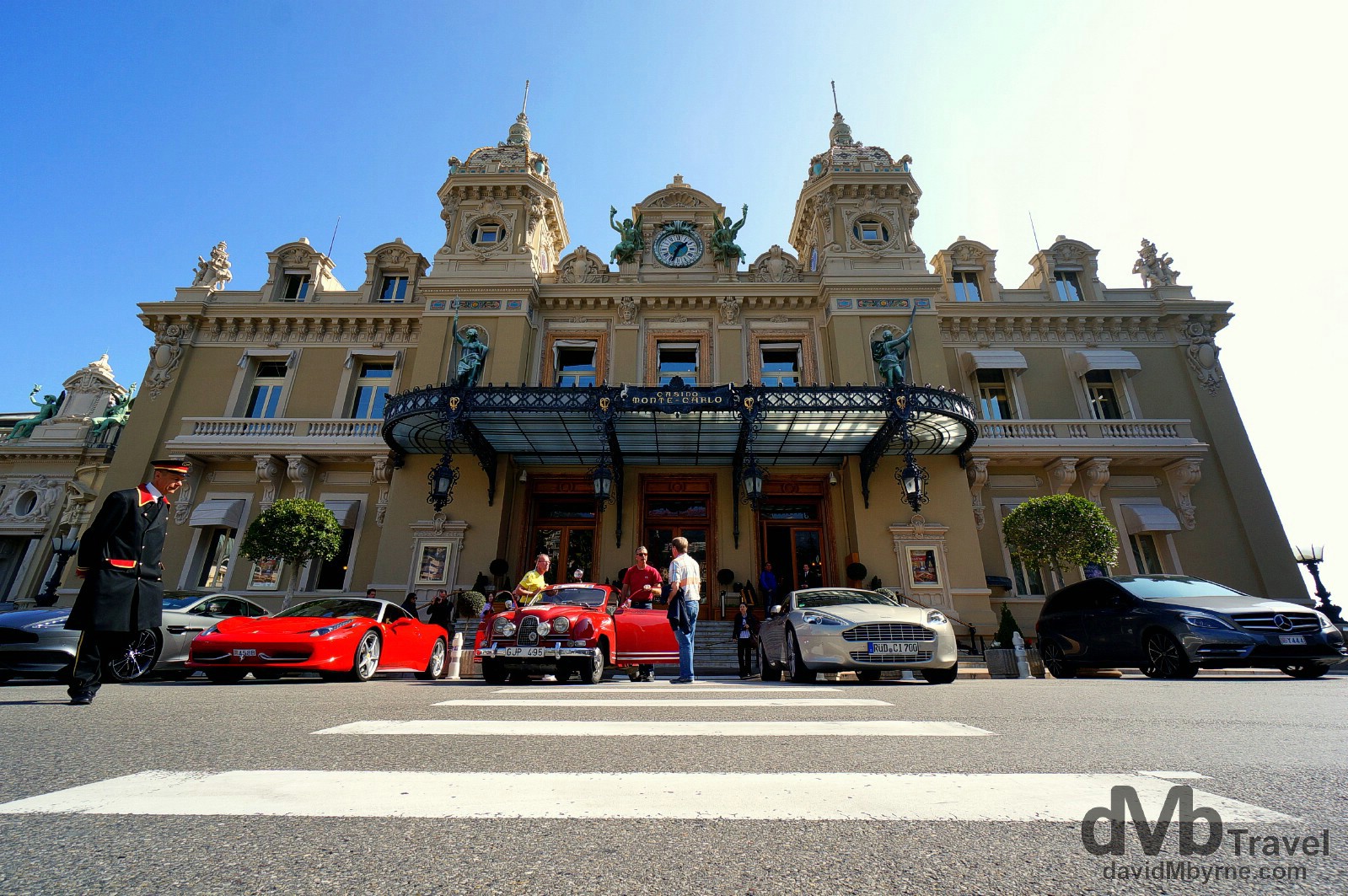 It’s the famous Monte-Carlo Casino that is largely credited with transforming Monaco into what it is today. I was surprised to read that in the mid-19th century Monaco was one of the poorest countries in Europe. However, within a few years of the Monte-Carlo Casino opening in 1863 it was generating so much money that Monaco was in the position to be able to abolish income tax, the start of Monaco’s tax-free status. The rest, as the saying goes, is history. Monte-Carlo, Monaco. March 14, 2014. 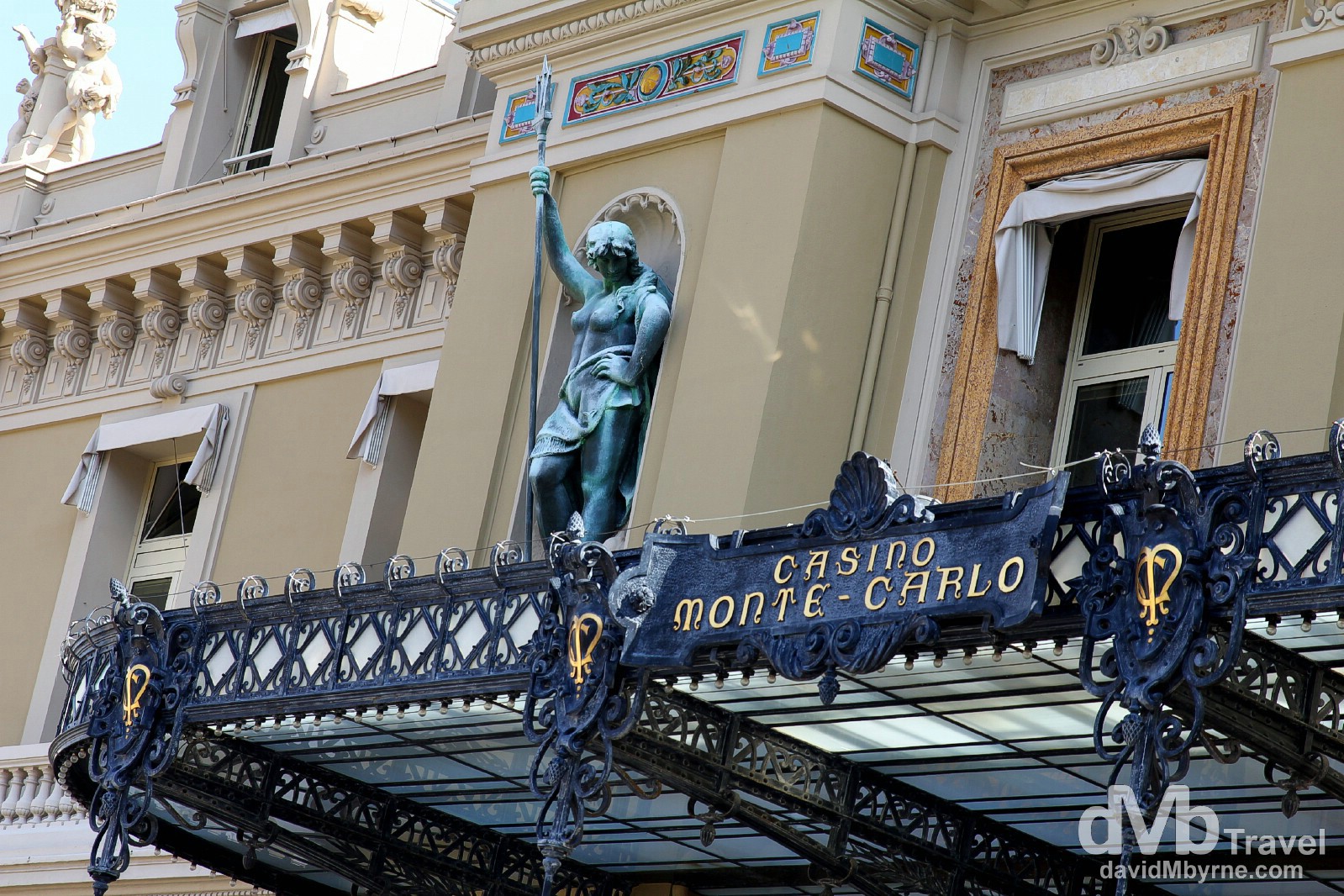 Monto-Carlo: An international byword for the extravagant display and reckless dispersal of wealth. 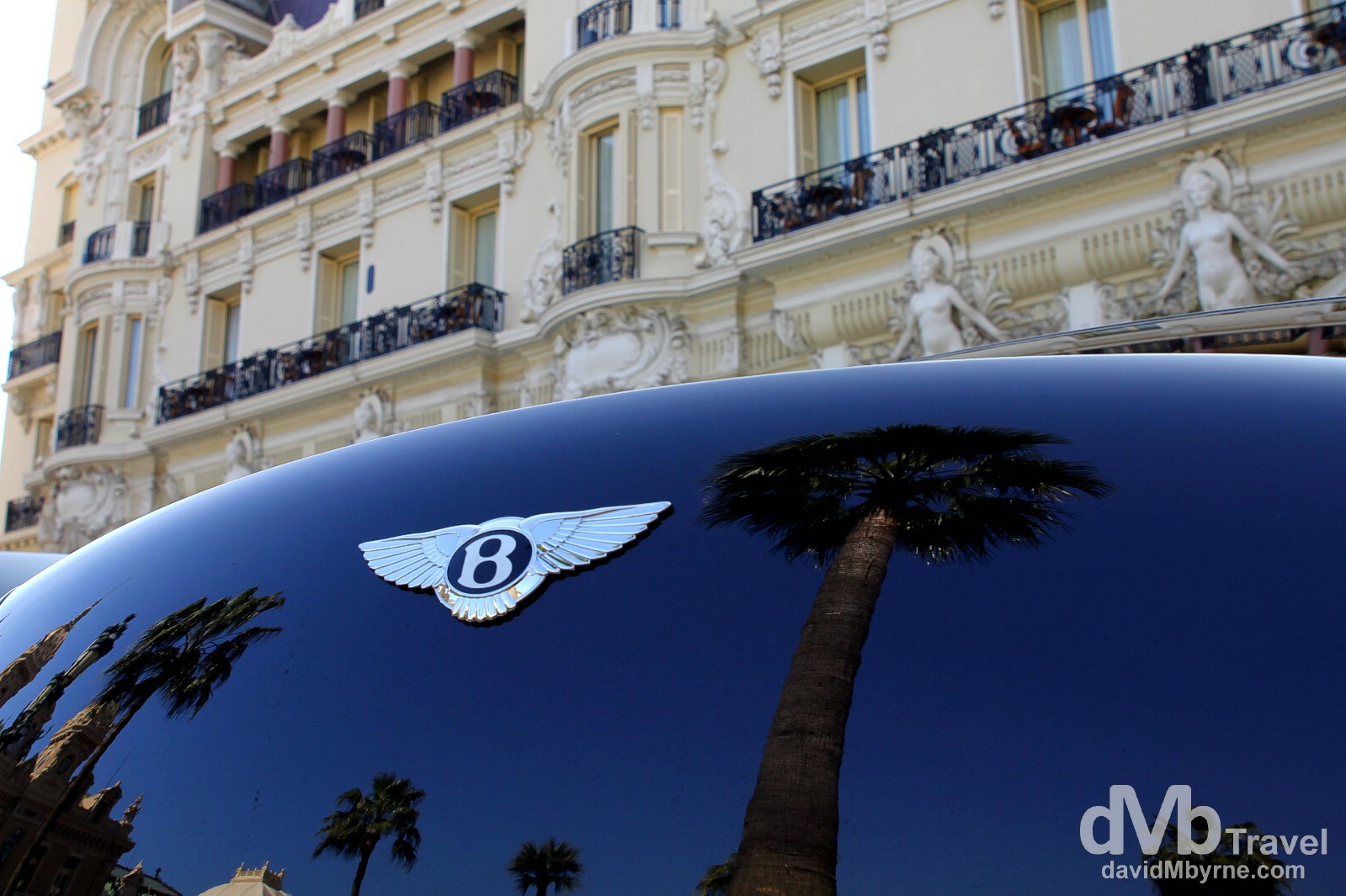 A Bentley parked outside the Hotel de Paris. The 1863, 187-room, 5-star (what else) Hotel de Paris seems like a comfortable enough place. According to its website ‘A simple flight of steps leads from Place du Casino to the majestic lobby… low relief sculptures, marble colonnades and crystal chandeliers combine to create a sense of awe-inspiring solemnity which makes this such a memorable destination.’ But they would say that. You can get a room here for a low as €360 but the highest rates, for the exclusive 2 bedroom suite, will set you back a tidy €5,000 a night. And no, breakfast is not included, although they do throw in free admission to the Monto-Carlo Casino & access to the private beach Beach Club with free sun-lounger & towel. Monte-Carlo, Monaco, March 14, 2014. 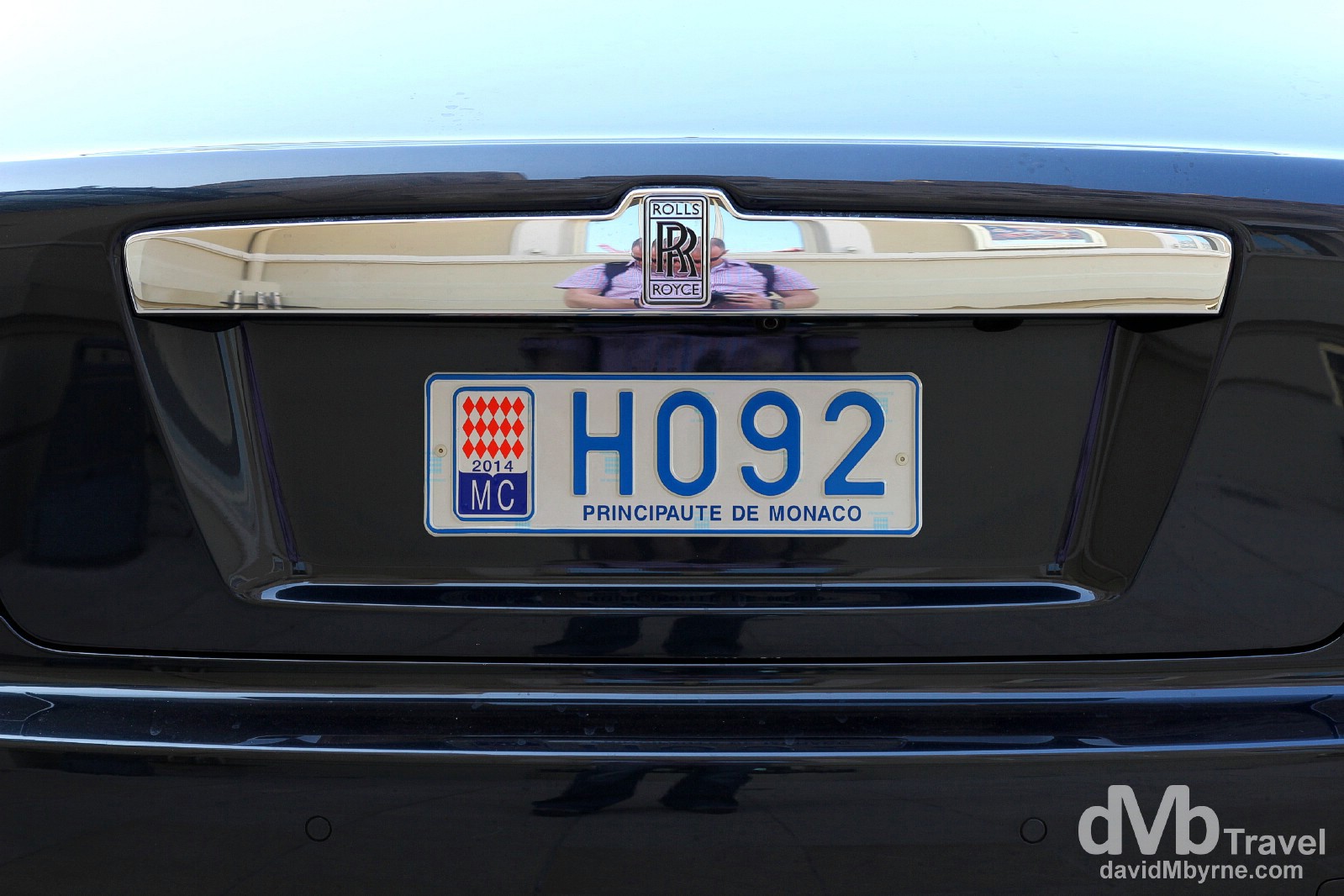 I couldn’t help playing with the reflections. Everything was so clean and shiny. Monte-Carlo, Monaco, March 14, 2014.

Alcatraz for the rich. 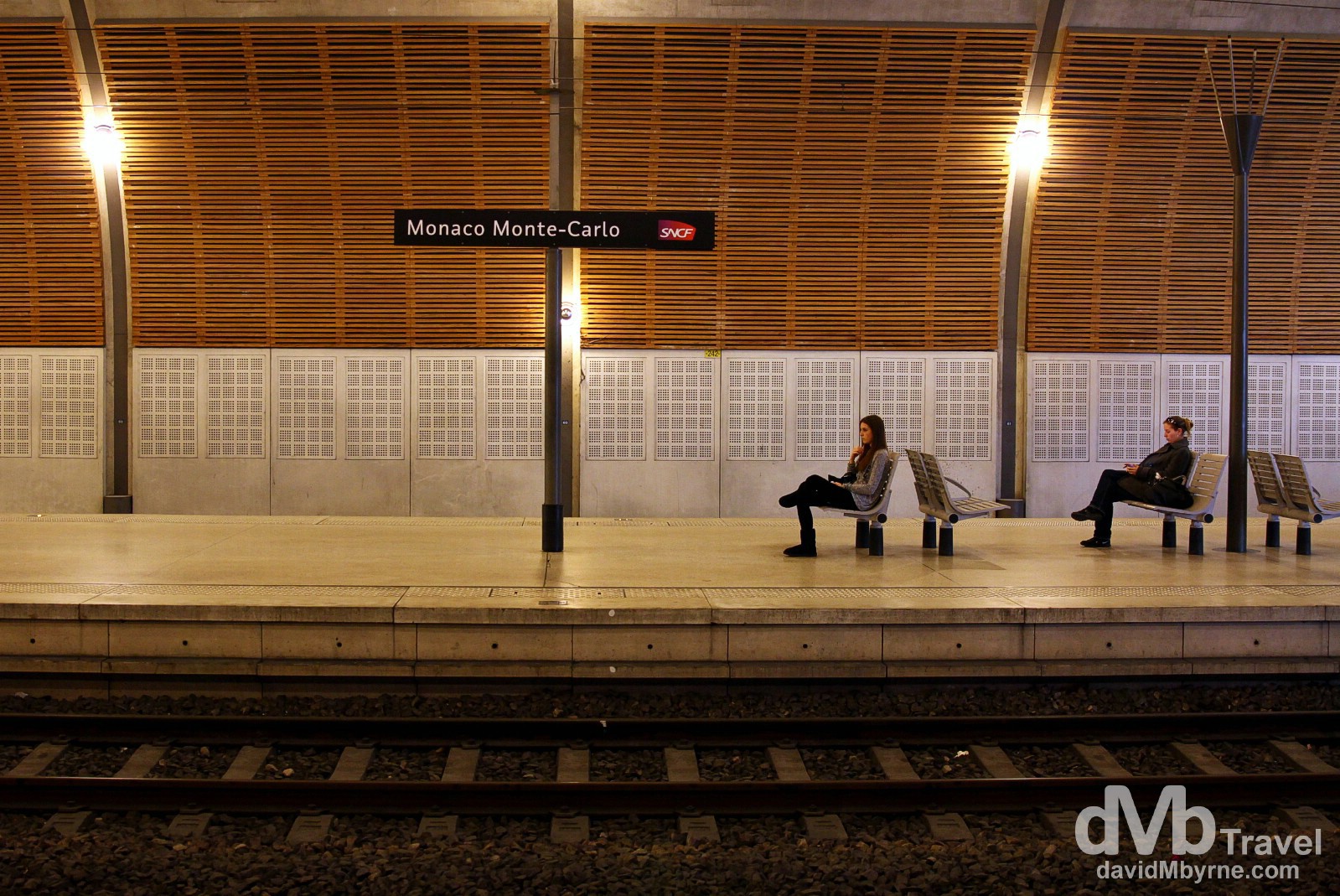 On the platform of the subterranean train station platform in Monaco. March 14, 2014.

As nice as Monaco is – and it is – you’ll feel much better when you leave, much more content with your lot in life. Honest. And hey, if you do have the money to hang around and enjoy Monaco as it’s meant to be enjoyed then more power to you.

Port de #Monaco, where if you don't look filthy rich then you're probably 'only' a #millionaire… http://t.co/lpoWXkgsD5