I don’t remember much from my first and only other visit to Kolkata (Calcutta) back in late 2002. All I remember is wanting to leave. The city, & much like many Indian cities, can do that to you. 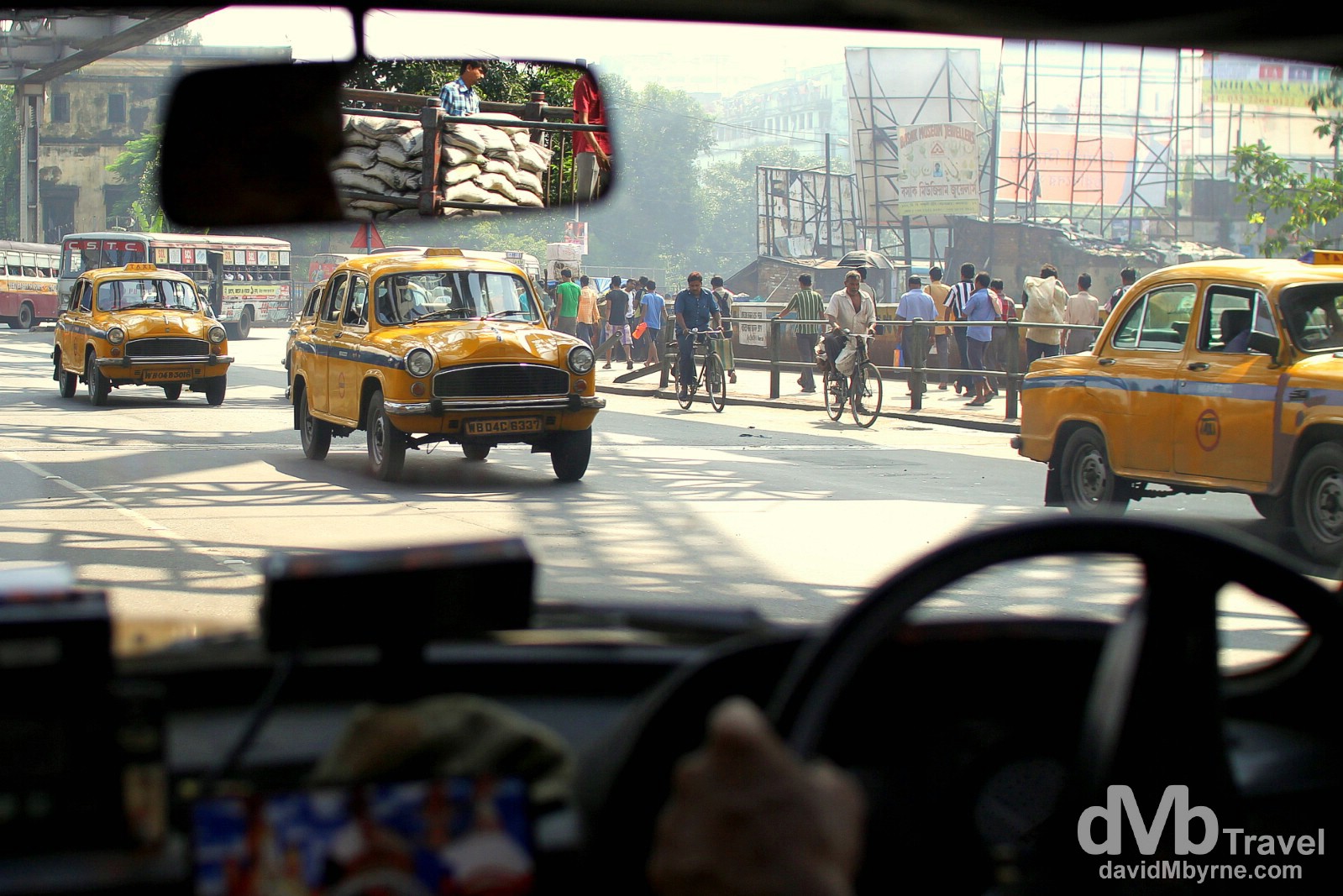 In a taxi on the streets of Kolkata (Calcutta) (

Kolkata, Take 2
My aforementioned first visit to Kolkata was almost exactly a decade ago. Back then, just like now, the city was my last stop in India, coming at the end of my first visit to the country, a 5-week west-to-east crusade, a large chunk of which I spent sheltering from India’s aggression on the beaches of Goa (the greenhorns I sported back then are well & truly gone). Back then I guess I was ready to leave the city, the centre of the third most populous metropolitan area in India, before I even arrived and thus didn’t give the city’s overbearingness a chance. Thankfully I did this time. Within a few hours of arriving here off the overnight train from Varanasi I had seen more of the city’s sights than I had after spending two days here back in 2002. And there’s plenty to see – the markets of Chowringhee & people watching on the streets or by the Hooghly River will keep most entertained. But it was the city’s fine collection of stunning colonial-era buildings that was the undoubted highlight of this trip to the city for me. 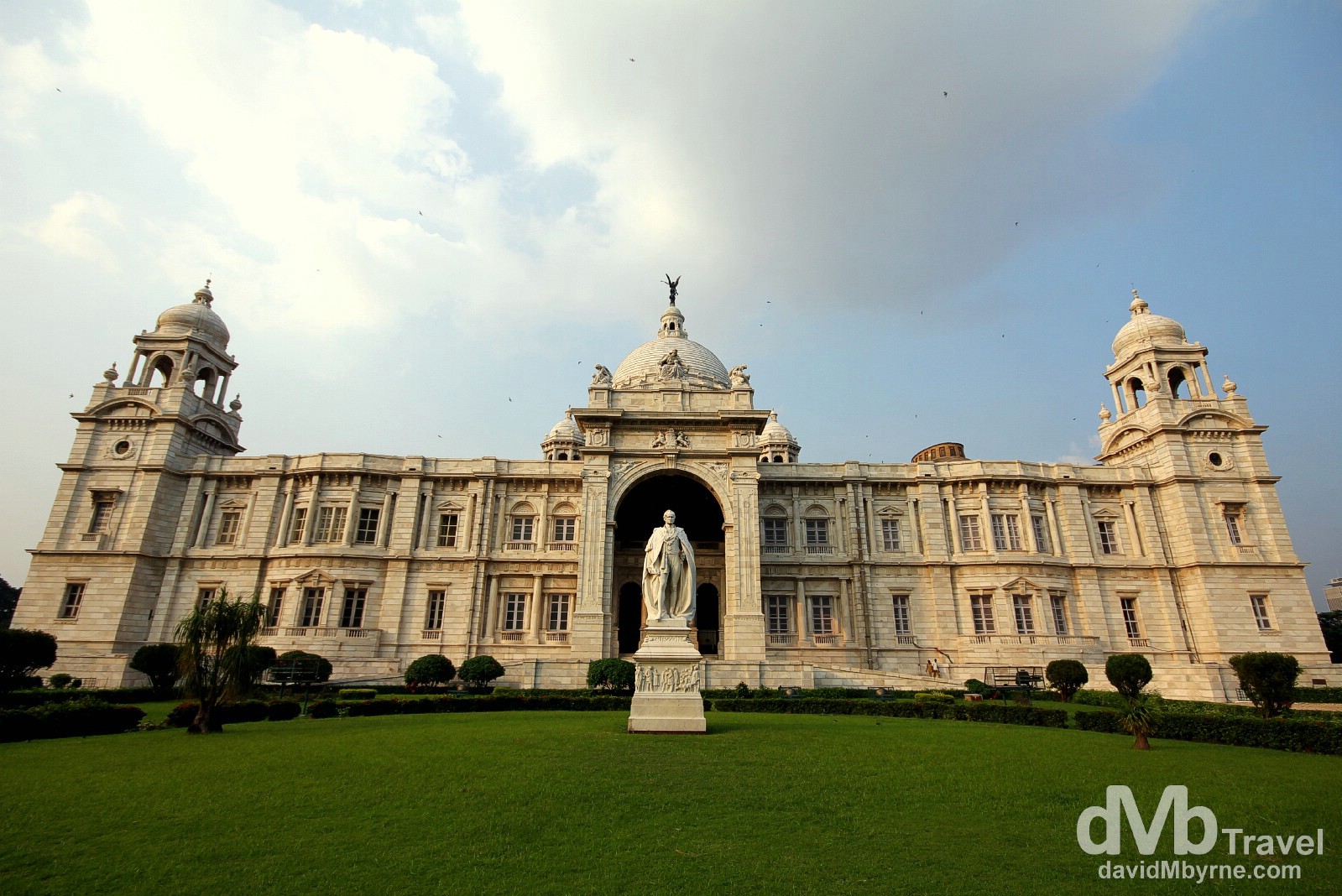 As the former capital of British India, Kolkata boasts some stunning colonial-era buildings, ogling at which was the highlight of the city for me. Kolkata’s grandly white-domed 1866 General Post Office & the pastel façade of the High Court are particularly appealing remnants of the British past. But even they can’t hold a candle to the massive colonial folly that is this, the Victoria Memorial. Built to commemorate Queens Victoria’s 1901 Diamond jubilee, although not finished until 20 years after her death, it’s easily one of India’s most impressive buildings. Pictures were not allowed inside the galleries of the building itself but most agree it is best viewed from outside in the well-tended gardens or from across one of the fronting reflecting pools (although from either location it’s hard to get an appreciation for the sheer size of the structure). The Victoria Memorial, Kolkata (Calcutta), West Bengal, India. October 16, 2012. 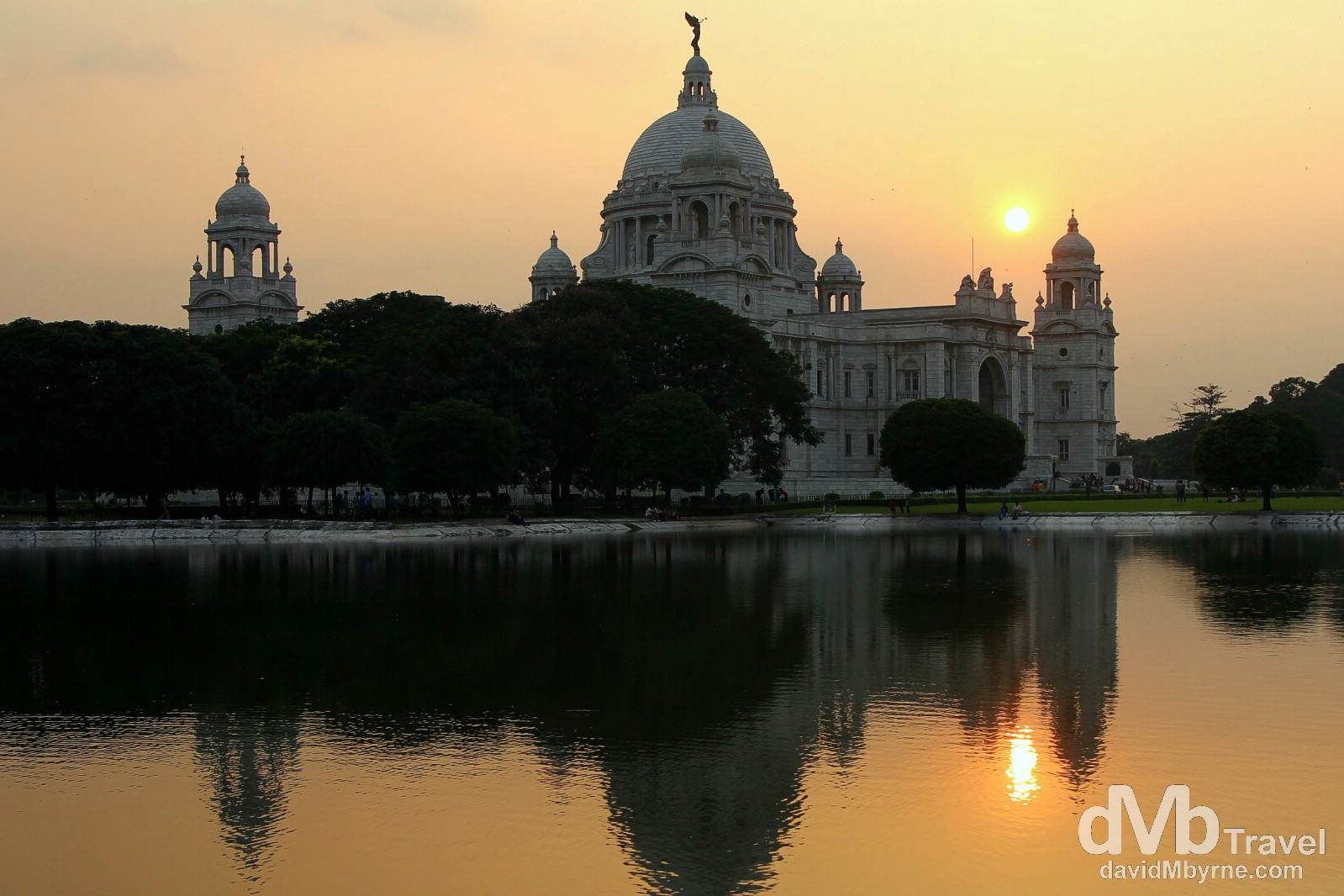 Of course this being India, most of the city’s colonial buildings are in dire need of a bit of upkeep, well overdue upkeep – a lick of paint here, a bit of crack-concealing plasterwork there. Just some basic TLC. Walking around the BBD Bagh area I couldn’t help but wonder why the Indians didn’t make more of an effort to preserve some of the treasures of the city, the treasures gifted to them by the British. 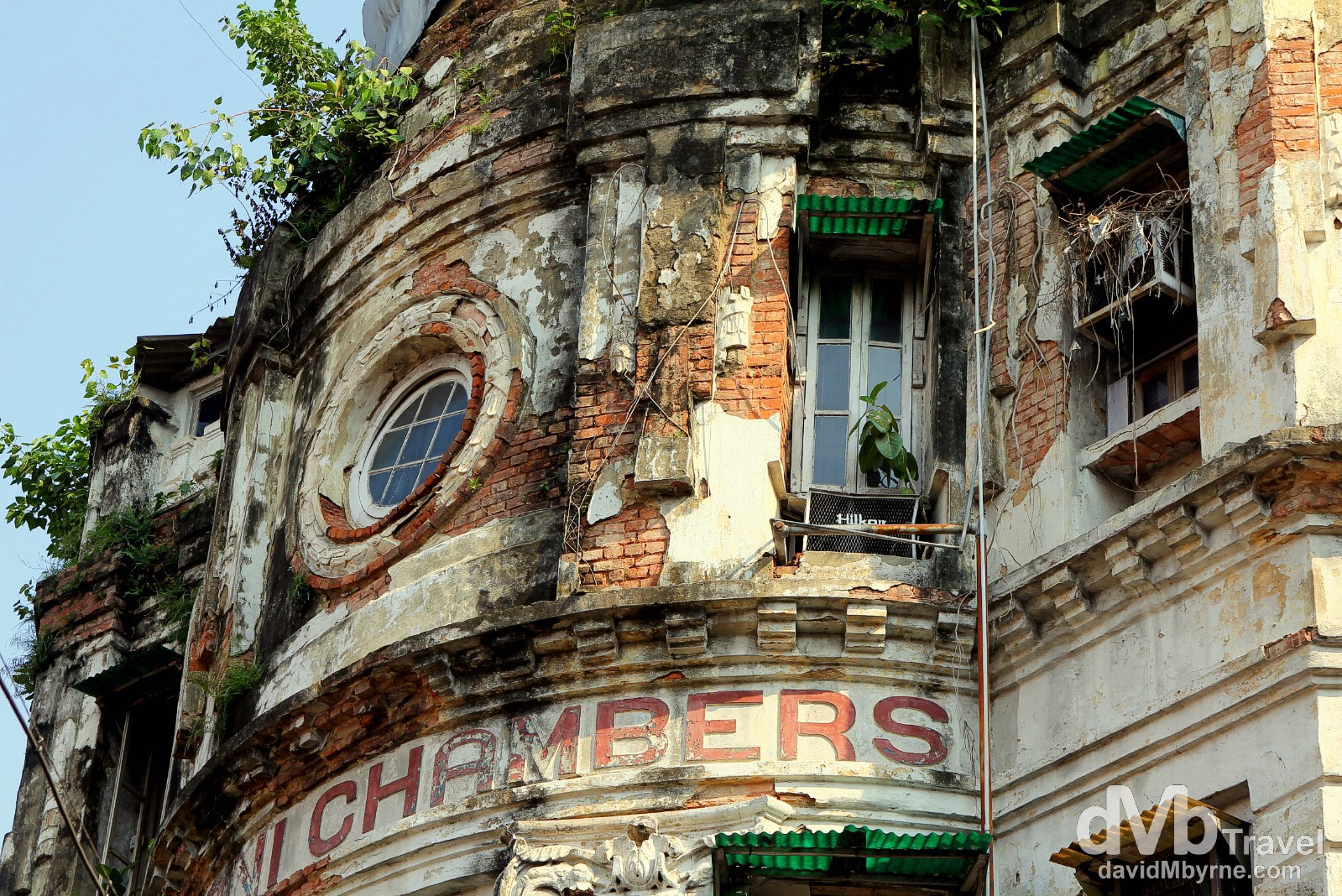 The crumbling façade of the Futani Chambers building in the BBD Bagh area of Calcutta, West Bengal, India. October 15, 2012.

This visit to Kolkata wasn’t all about viewing grandiose &/or dilapidated colonial buildings. People watching came a close second, not surprising considering this is India after all. 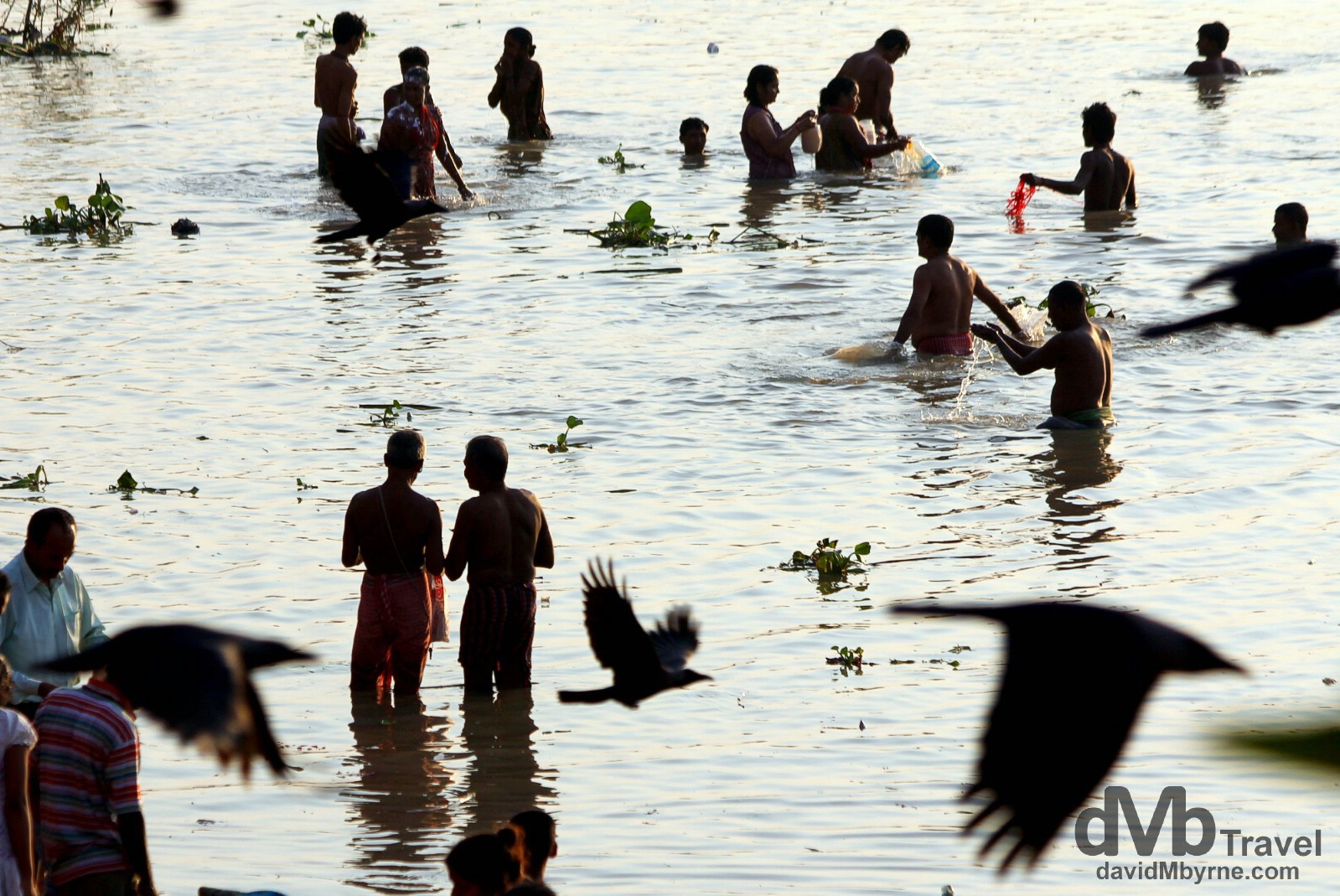 Bathing in the unappealing murky waters of the Hooghly River at the Babu Ghat a distinctly seedy area of the city but one considered holy to Hindu Kolkatans. Calcutta, West Bengal, India. October 15, 2012. 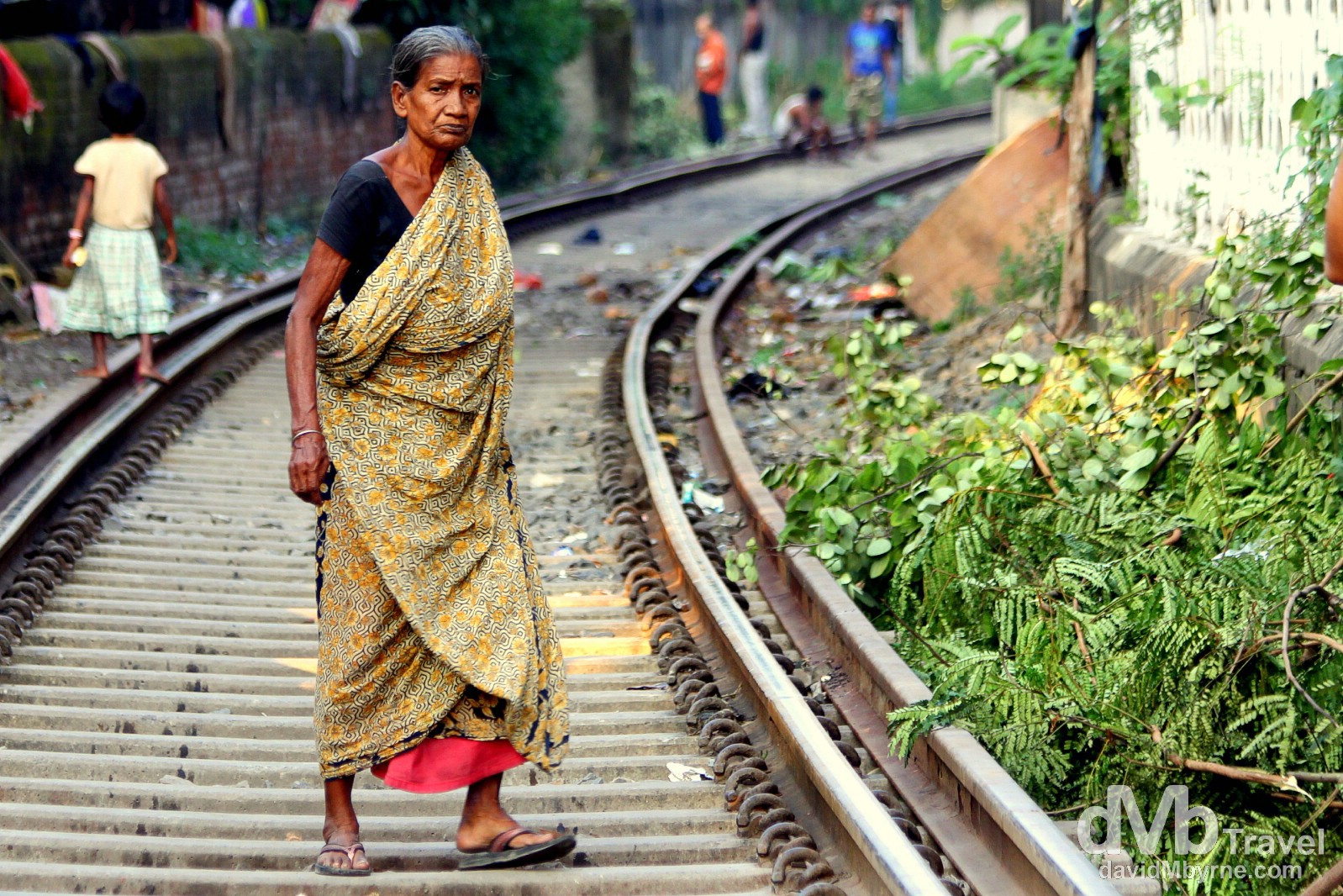 Activity at a junction on Àshutosh Mukherjee Road. Kolkata (Calcutta) is one of the last bastions of human-powered tata rickshaws, hand-pulled rickshaws, in India. Many of the tana rickshaw-wallahs are virtually destitute, sleeping on the pavements under their rented chariots. Some feel the idea of a barefooted man pulling people around the unsanitary, flooded streets morally unacceptable, including some in government – no new tana-rickshaw licenses have been issued for years & since 2003 the West Bengal administration has toyed with the idea of outlawing them altogether. Kolkata (Calcutta), West Bengal, India. October 16, 2012.

An Unfair Rap?
Kolkata (Calcutta) gets a bad rap, & unfairly so in my opinion. Yes, its streets are a teeming, busy mass of human existence & poverty is never too far away. But it’s a likeable Indian city & given a chance it may surprise. It did me, but admittedly it needed two attempts to do so.