Straddling the continents of Asia & Europe, Istanbul, the former capital & the most populated city in Turkey, has been one of the major centre points of the world for thousands of years. Once known as Byzantium & then Constantinople, it was home to one of the last Roman outposts for a thousand years before it was conquered in 1453 by the Ottoman ruler Sultan Mehmed II and subsequently became part of a Muslim nation; it’s still one today, one pushing to become the only Muslim member of the EU (& has been for a while). 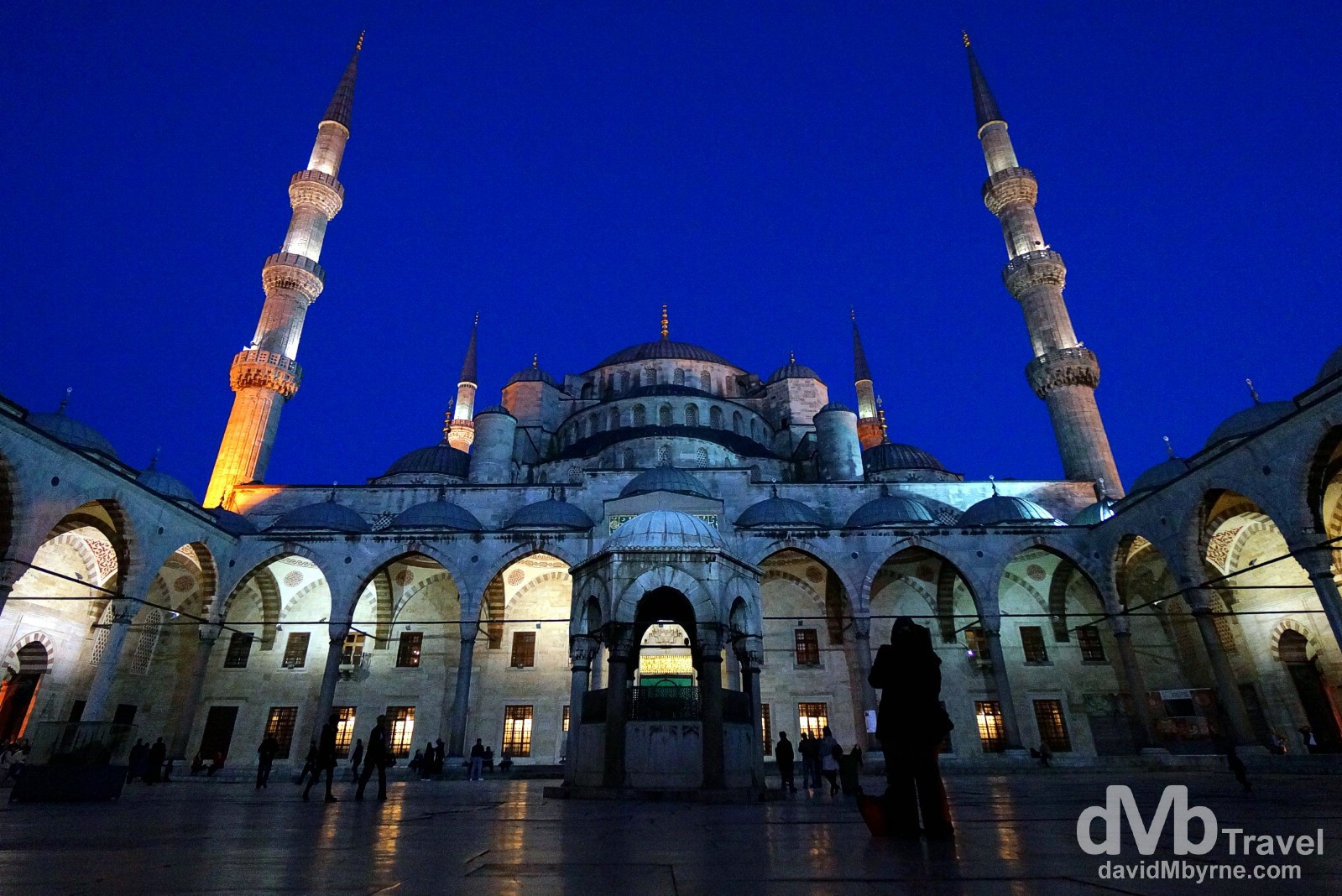 As the centre of several different empires, the number of historic and religious monuments and buildings in Istanbul is staggering. One of the city’s most famous landmarks is the Sultan Ahmed Mosque. Built between 1609 and 1617, it is popularly known as the Blue Mosque for the blue tiles adorning the walls of its interior, although its grey exterior does look very blue in this immediately-after-dusk photograph. Within a few minutes of arriving in the city earlier this evening, & shortly after dumping my in my hotel room, I was down in the mosque’s central courtyard, the biggest of all the Ottoman mosques. I didn’t visit the interior (it was closed this evening to non-Muslims) but plan on paying it at least one visit tomorrow. The inner courtyard of the Sultan Ahmed Mosque, aka The Blue Mosque, in Istanbul (

It’s good to be back in Istanbul on what is my third visit to the city. Mostly good. I’ve only been here a few hours but I’ve already had a shawarma; I have visited the central courtyard of the Blue Mosque; I’ve got that comforting, sweet whiff of shisha/water pipe (but strangely I haven’t actually seen one yet); I have heard the melodious call to prayer a few times; I’ve cursed the smokers (Turks smoke like chimneys); & I’ve been asked a million times already by just as many touts where I come from – I invariably reply that I’m “from Turkey, just like you!” which always does the trick & stops them in their tracks.

Sultanahmet
I’m in the Sultanahmet area of the city, the heart of Old Istanbul, a UNESCO-listed World Heritage site packed with some of the city’s most famous and thus visited sights, including the aforementioned Blue Mosque & the Hagia Sophia, one of the world’s great buildings. I’ll be taking a look at that tomorrow having failed to do so on my previous two visits to the city back in 2007 & 2008. I’ll also play with a few more touts in the city’s famous Grand Bazaar &, time permitting, I’ll take an amble across the Galata Bridge spanning the Bosporus strait to Asia. Oh, and I’ll take some pictures, too. I wanted more time back here but really only have one full day. That coupled with a long to-do list means tomorrow will be a busy day. Best get to bed so.

I saw the clouds rolling in towards the end of what was a gorgeous day today & I knew it was going to be a shitty evening. And it is. It’s pelting down outside. I’ve just been out in it, standing by wondering what all the Turks are protesting about. There are loads of them, all wearing coloured headbands & marching up & down Divan Youl Cad, Sultanahmet’s main drag. Something has gotten their ire that’s for sure. Surely not the rain & certainly nothing I did. All I’m guilty of doing today was buzzing around the city taking pictures. Honest. 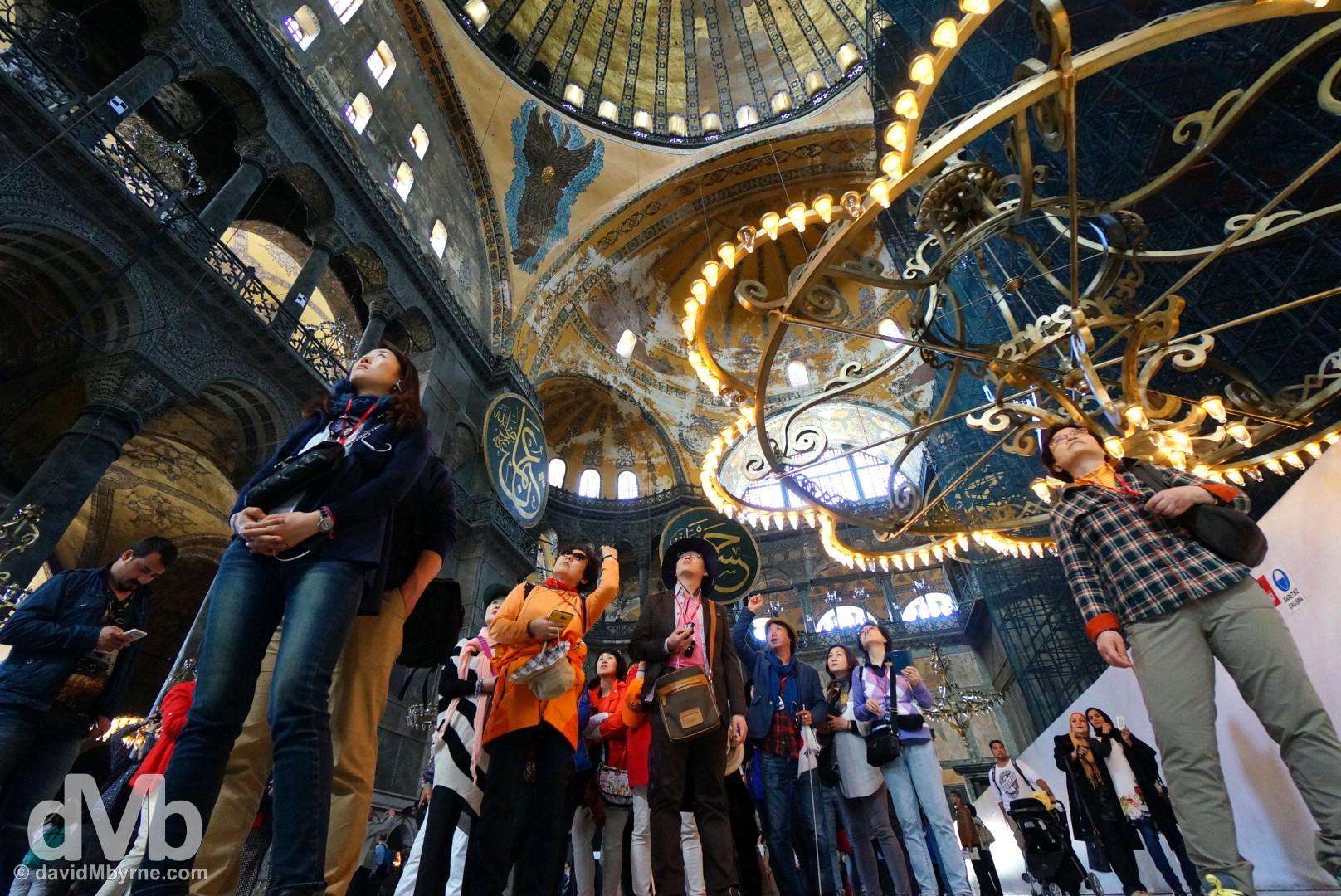 A group of flag-following Korean tourists admiring the interior of the Hagia Sophia. The massive Hagia Sophia (Ayasofya in Turkish) is the first attraction listed in Lonely Planet’s Istanbul guidebook. According to them it’s the city’s most famous monument & on the second day of my third visit to the city I finally gave it a look. The building was completed in 537 when present-day Istanbul was the Roman city of Constantinople; at that time this was easily the greatest church in Christendom. Muslims don’t need churches so it was converted into a mosque after the Ottoman conquest of 1453 & it stayed that way until it was turned into a museum in 1935. What purpose it serves today, beyond extracting a lot of money (it’s over €8 to enter) from a lot of tourists, I’m not too sure. Lonely Planet claims the building’s huge central dome to be ‘the greatest of all domes’. A big call indeed & I’m sure they didn’t intentionally forget about St Peter’s Basilica in Vatican City when employing that bit of hyperbole. It’s impressive yes but as it’s perennially covered by scaffolding it’s hard to fully appreciate it. Hagia Sophia, Istanbul, Turkey. April 10th, 2014. 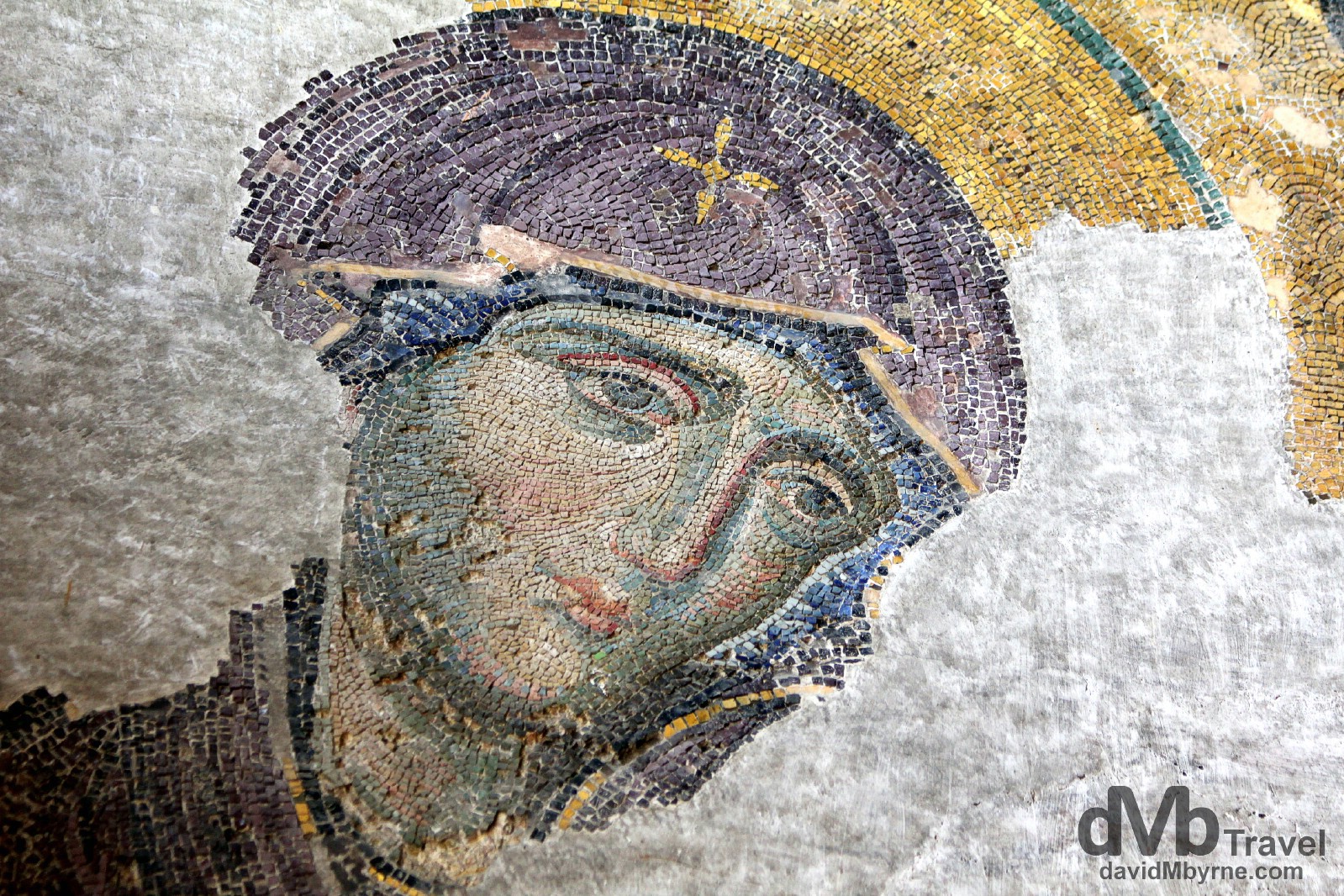 A section of the Deesis Mosaic (The Last Judgement) in the Hagia Sophia. The dome of the Hagia Sofia may be the big draw but I personally preferred the Hagia’s mosaics, especially the early 14th century Deesis Mosaic (The Last Judgement) which shows Christ, the Virgin Mary (seen here) & John the Baptist. The mosaic, like the rest of the building, has seen better days (it’s getting on a bit, I know) but what remains of it to this day is certainly impressive. Hagia Sophia, Istanbul, Turkey. April 10th, 2014 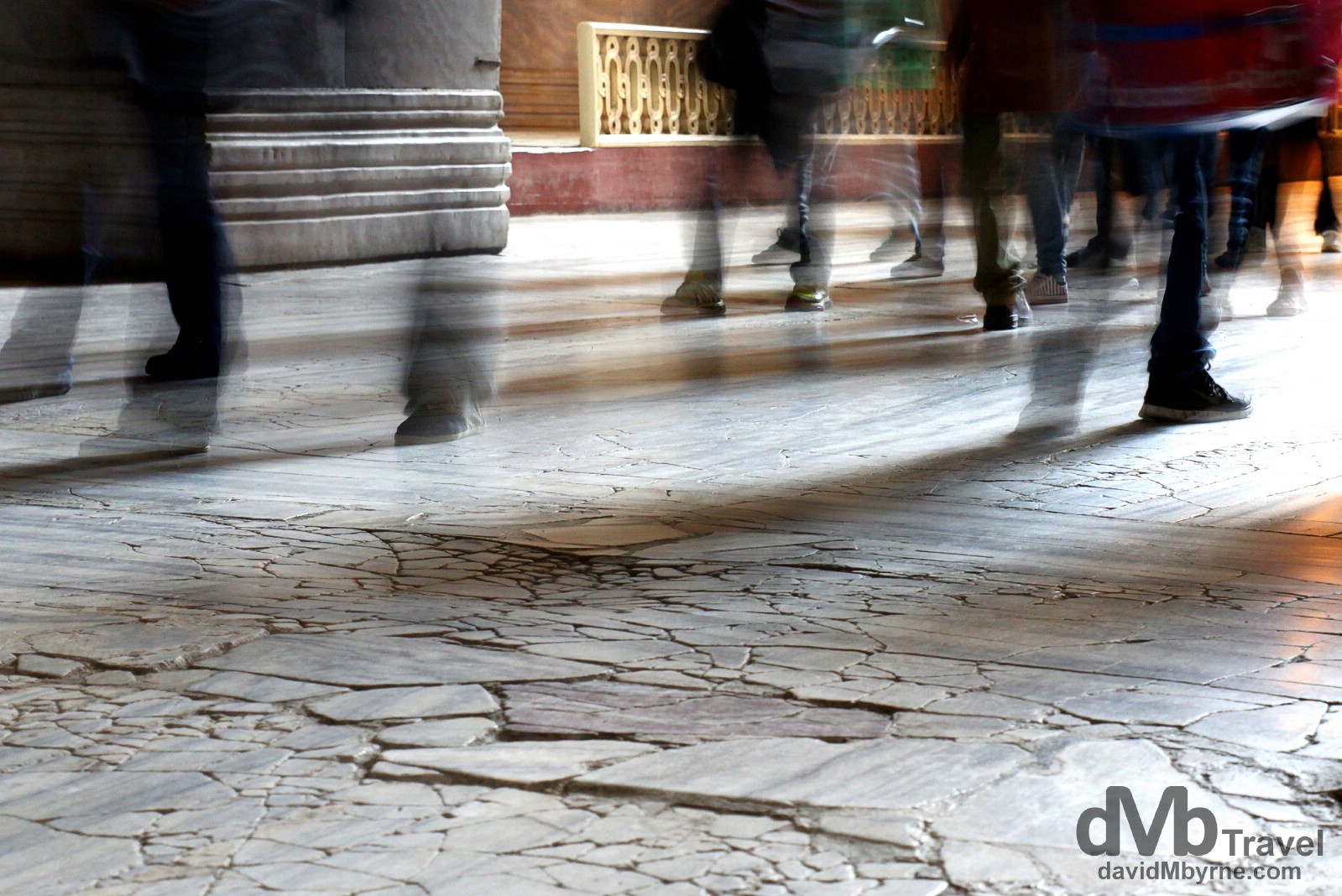 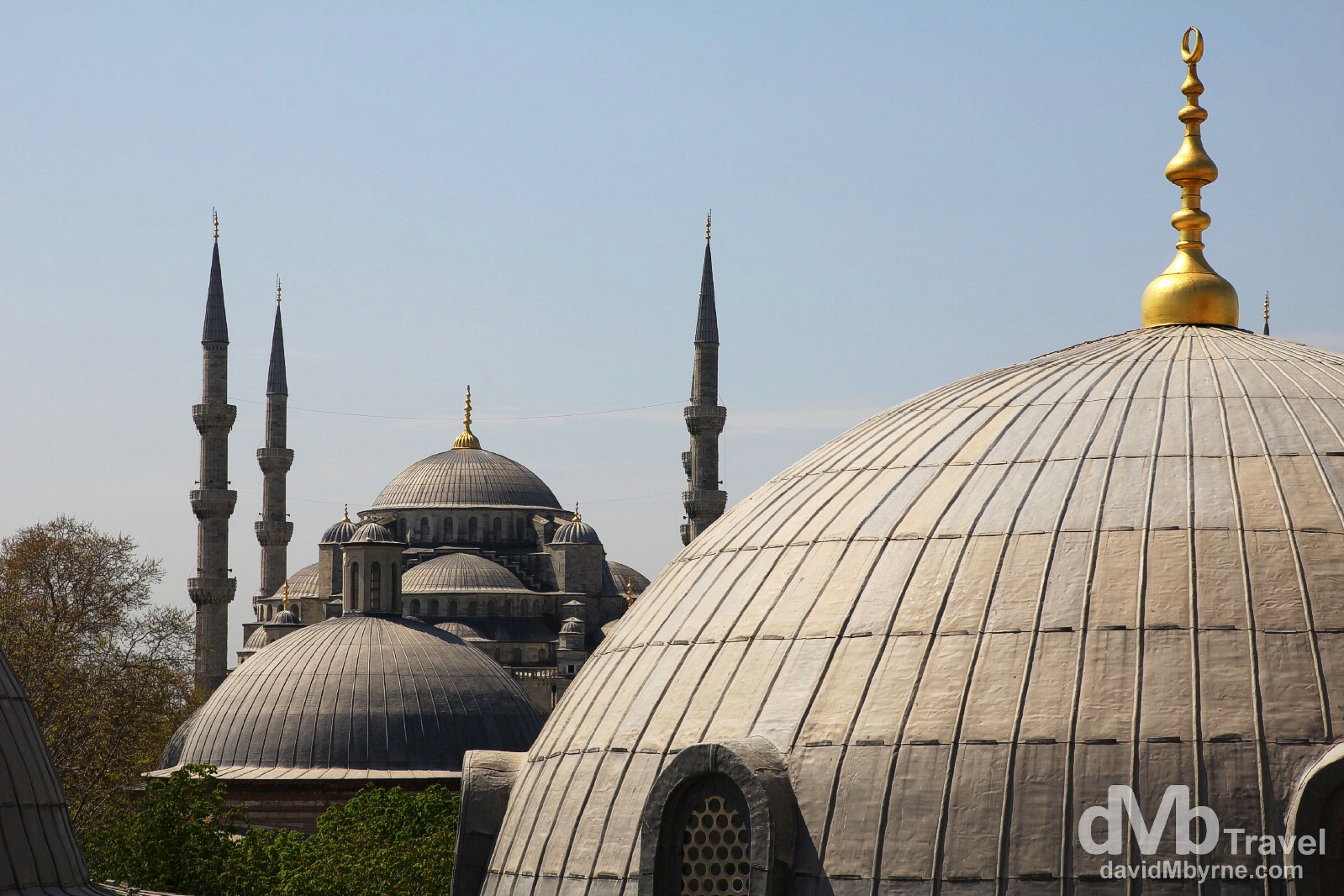 The Sultan Ahmed Mosque, a.k.a. The Blue Mosque, as seen from the upper windows of the Hagia Sophia. You see, it was a nice day today. Istanbul, Turkey. April 10th, 2014

I paid another visit to the Sultan Ahmed Mosque and unlike yesterday evening they let me in this time. 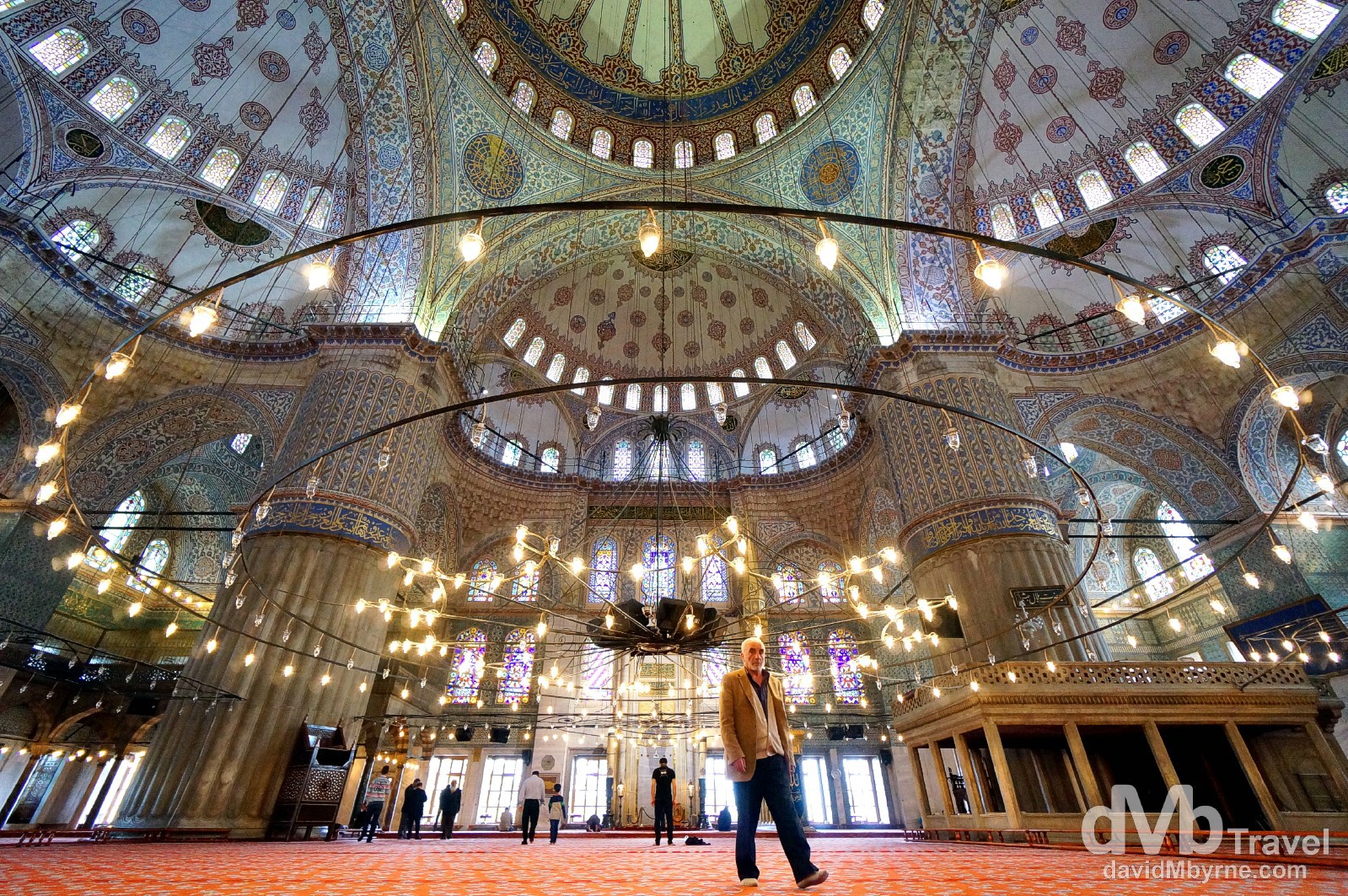 There were also a lot of people in the Sultan Ahmed/Blue Mosque, all, like me, marvelling at the mosque’s 2646 m² prayer hall, its 43 metre-high & 23.5 metre-wide dome (representative of the heavens in Islamic culture), some of the 21,000 tiles that make it all look so damn pretty, & the four massive 5 metre-diameter pillars holding the whole shebang up, two of which can be seen in this picture. The Sultan Ahmed Mosque, a.k.a. The Blue Mosque, Istanbul, Turkey. April 10th, 2014

I moseyed down to the banks of the Bosporus strait with the intentions of walking over the Galata Bridge from European to Asian Istanbul. But once I got there I sat around for too long on the European side watching the world go by before eventually deciding that my return to Asia can wait one more day at least – I’ll be in Dubai, UAE, this time tomorrow. 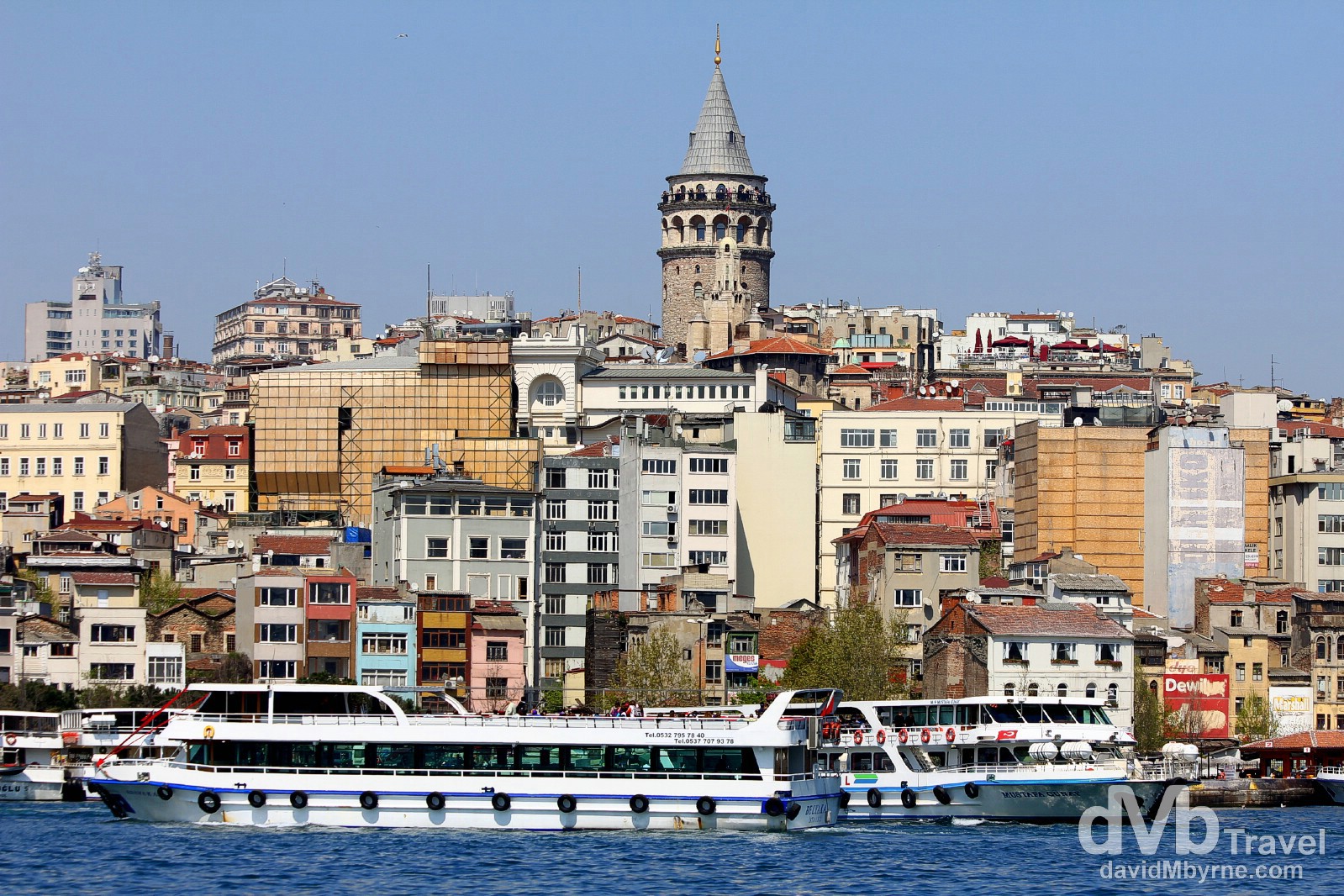 Boats on the Bosporus & the 1348 Galata Tower, a prominent landmark in the em, Galata district of (Asian) Istanbul, Turkey. April 10th, 2014

Regardless of its storied past, today Istanbul is a tourist city. And the city’s attractions don’t come much more touristy than its labyrinthine, chaotic Grand Bazaar. 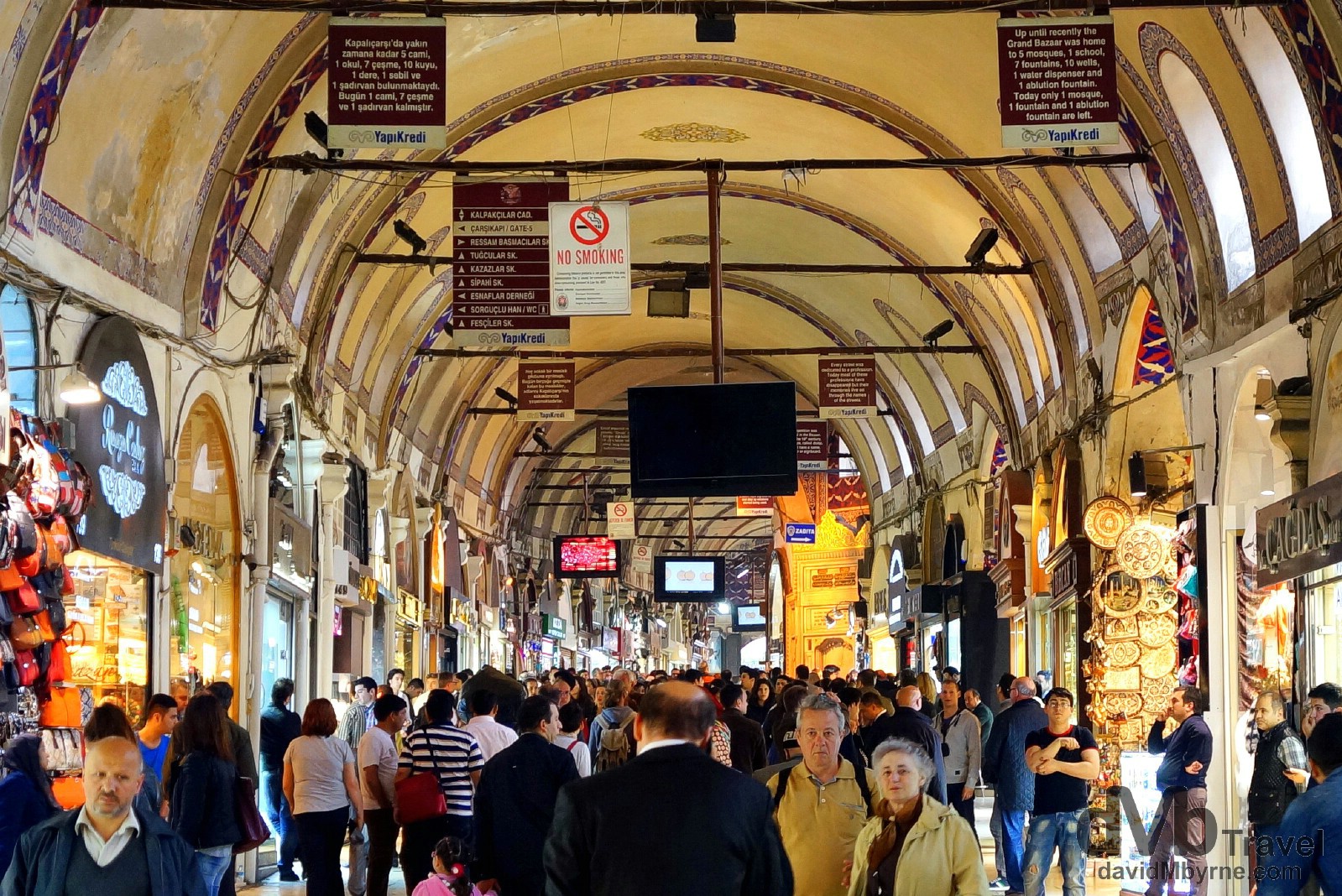 With some 4000 shops spread over several kilometres, the Grand Bazaar is always a busy place. I’ve always enjoyed getting lost in here; while touristy beyond belief, there is nonetheless a jovial atmosphere among the buyer-seller banter & there’s always someone on hand to convince you why you need that something you never knew existed a few minutes previous. The Grand Bazaar, Istanbul, Turkey. April 10th, 2014 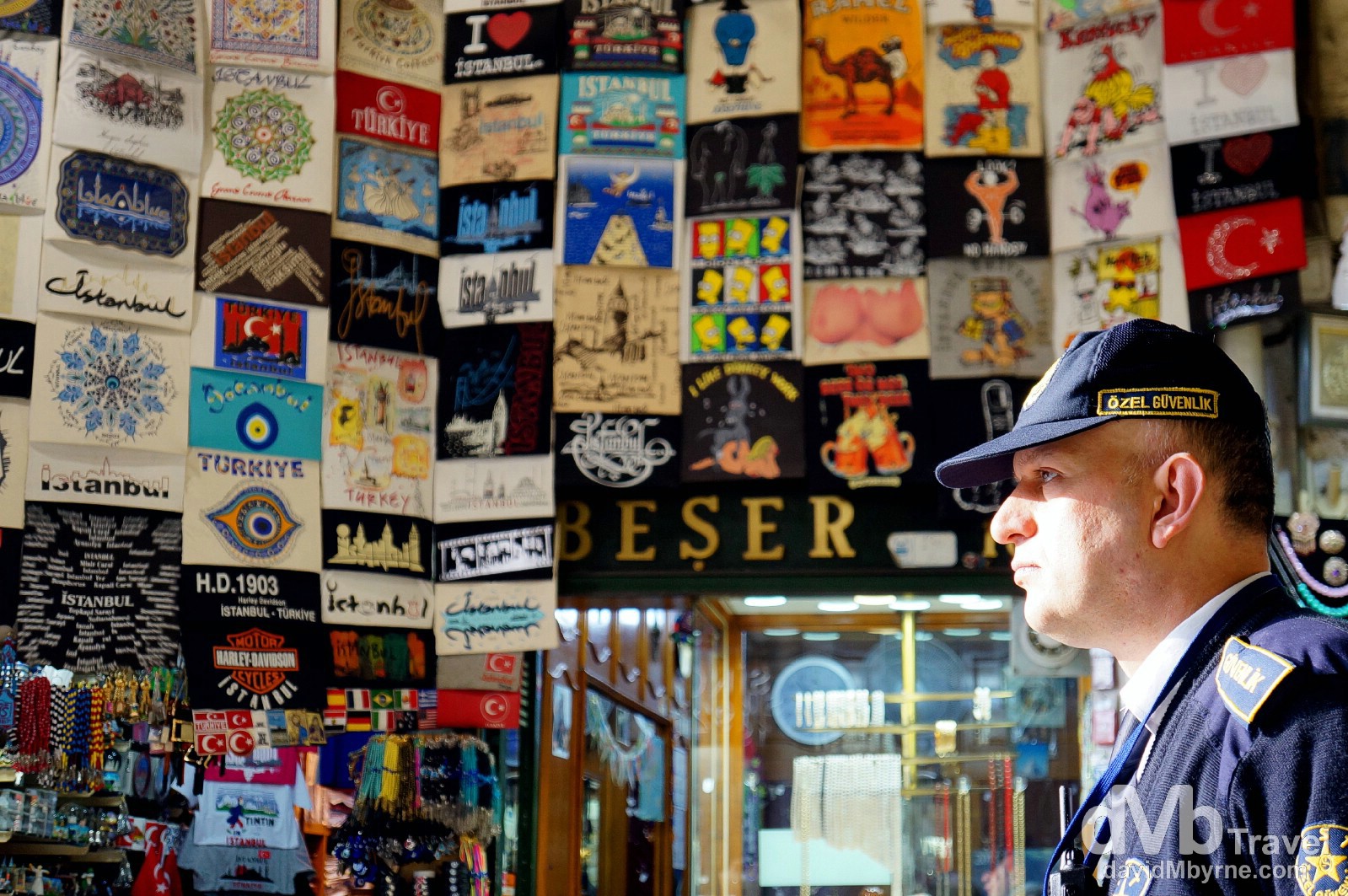 A guard at an entrance to the Grand Bazaar in Istanbul, Turkey. April 10th, 2014

Backpacking Break
I’ve just checked my flight details for tomorrow. And lucky I did too. I was checking for the time but I happened to notice that I’m not flying out of the airport that I flew into yesterday. Instead I’m flying from one I hadn’t heard of until a few minutes ago – Sabiha Gokcen International Airport. A quick bit of googling tells me it’s some 50 kilometres on the other, Asian side of the city. Best figure out how to get there so. I can’t be missing that flight to Dubai. The first of 2 5-star hotels that I’ll be calling home for the next 8 nights in the desert awaits. Time to put the backpacking on hold.